There has always been a debate about widescreen laptops versus 4:3 (standard/normal/TV-non-HD) aspect ratio laptops — ever since widescreen became a “thing” in laptop users minds. The debate always came down to one or two points, but usually people would settle on the notion as follows: – A vertically oriented screen that best reflects your […]

There has always been a debate about widescreen laptops versus 4:3 (standard/normal/TV-non-HD) aspect ratio laptops — ever since widescreen became a “thing” in laptop users minds. The debate always came down to one or two points, but usually people would settle on the notion as follows:

– A vertically oriented screen that best reflects your standard A4 sized page is the best for reading and writing. Whereas a horizontally oriented screen such as a movie theatre screen is better when trying to sit back to be immersed in the content (e.g. movies, photos). However, multi-tasking (more than one app open at a time) throws all of this out the window.

This thinking has lead to a large swath of people lamenting over the fact that all computers seem to be becoming vertically challenged — because in fact for some tasks vertical screens are better.

The tablets that are currently permeating the landscape are overwhelmingly shaped in the old 4:3 aspect ratio. The iPad ((I’ll mention others so as not to be called biased or something, regardless of the fact that the only tablet with meaningful sales to date is the iPad.)) , the TouchPad, the Galaxy Tab 10.1, these are the tablets that users are preferring.

These tablets, despite their aspect ratios, are orientation ambiguous. They are made to be used both vertically and horizontally at the user and app developers discretion.

But that’s not the end of it, because as any movie buff will tell you — the iPad is anything but “widescreen”. Unfortunately — for this subset — the general user couldn’t care less if widescreen is really, well, widescreen.

I ran a little survey to gather a few data points on iPads and their usage. ((I specifically chose iPads because I needed a device with an actual user base.)) I tried to make the survey fun enough that users would quickly answer the questions I really wanted to know, without a lot of thought put into them. ((The more thought respondents put into questions, the less useful it is for me. I wanted true off-the-cuff answers.))

Look at this split for the normal orientation that an iPad is used in:

That’s pretty astounding when you think about the fact that PC/Desktop/Laptop manufacturers all but ditched this type of view, thus preferring the widescreen view portal. What’s even more amazing to me is the user preference for the iPad’s orientation:

Yep, most still like that vertical view — however — far fewer than I thought. Initially I suspected that most users (more than say 60%) would prefer the vertical orientation, but as you can see this is not the case. My guess is that it really depends on what and how each user is using the device.

What’s telling about this data, the take away, after looking it over is this:

– Users, by-in-large, use the iPad in whatever way they see fit for the task at hand — not in line with their screen orientation preference. That is if it is best to use the iPad in portrait than so be it — even if the user hates portrait devices.

Think about this for a moment, because it represents a very important industry shift.

For the very first time in computing, the user has been put in control of how best to utilize the display portal they have been given — not the manufacturer.

In fact it doesn’t matter that a slight majority uses the iPad more in portrait view than in landscape. What matters is the split — it’s close to even — because that shows that both views are important and crucial to the device.

Further consider this data about whether or not respondents own a laptop: 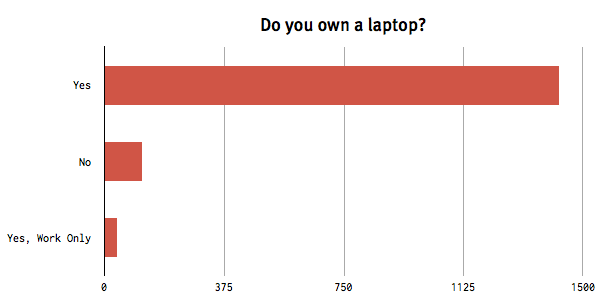 The overwhelming majority has a laptop. Two portable computers, one with a forced widescreen aspect ratio and the other with an orientation agnostic workflow — both not only used by people, but valued enough to have been purchased to do similar tasks.

Do we think now that the iPad is being purchased because it makes for great couch surfing, or could it be that it offers a level of flexibility and choice that consumers have yet to experience?

I am beginning to think that the “you pick the orientation” attitude of the iPad and most of its apps is what makes it so appealing.

I think initially both consumers/pundits/Apple thought that the iPad was going to see a lot of use as a video player. If turned out to be the case, then this data makes no sense:

Want to take a guess as to why?

Yes, 16:9 aspect ratios would be great for movie watching, but it would be pretty piss-poor for just about any other task. Again, this is why the serious iPad competitors are closer to 4:3 than they were when the iPad first came out.

When tablets first started competing with the iPad, the only thing that other companies could see the device usage for was movies. They were wrong and I think they know it now.

You’d be foolish to make an app that only works in one orientation — even if your app is a game.

Take Madden for example. This game is a Football ((AMERICAN)) game that is only played in landscape — but does that make the most sense?

Certainly not when you are trying to make a hail mary pass, return a punt/ kickoff. Portrait would make much better sense in those scenarios because you could see a longer range of the field. In fact, in real life, Football fields are shaped in portrait — not landscape — for the players, not the fans.

Most apps are better if they offer something unique about each orientation the app may be used in. Better keyboard in landscape, easier to read in portrait, for example.

### In Conclusion, or Something

Tablets are not only a massive shift because of low-CPU powered computing and touch interfaces. They are shifting the balance of power back to the user.

Tablets are giving the user a viable choice for how they want to view any given set of data the screen will show. Tablets are *actually* more malleable to the task at hand.

I won’t leave you hanging in case you were wondering the response to the rest of the data. Here is the remaining data sets with a few comments from me on each.

The iPad 2 hasn’t even been out a year yet, massive ownership thus far.

This was just a test to see how nerdy the respondents were/are.

We all knew this answer…

Just goes to show that people still don’t want crap — even if it is absurdly cheap.

My guess is that at least half of the people that answered “sometimes” are lying to themselves — they really should be in the “wait, where is that thing” category.