[Jim Dalrymple doesn’t like](http://www.loopinsight.com/2012/02/17/mountain-lion-is-not-more-like-ios/) the idea that Apple is trying to make the Mac more iOS like, saying: >Mountain Lion is about familiarity and integration. The new features and apps in Mountain Lion make sense for a desktop operating system. >These claims of Mountain Lion being more like iOS are just shit. Are they? I […]

[Jim Dalrymple doesn’t like](http://www.loopinsight.com/2012/02/17/mountain-lion-is-not-more-like-ios/) the idea that Apple is trying to make the Mac more iOS like, saying:

>Mountain Lion is about familiarity and integration. The new features and apps in Mountain Lion make sense for a desktop operating system.

>These claims of Mountain Lion being more like iOS are just shit.

Are they? I don’t disagree with what Dalrymple is saying up and until the last line. Apple is indeed trying to bring some familiarity and integration between the two platforms, but there’s more to it than that.

The way I see it, Apple is trying to simplify OS X and bring to it some of the features from iOS that make sense. To that end Apple is very much making Mountain Lion more iOS like. Take for example these screenshots from [Jason Snell’s preview of the OS](http://www.macworld.com/article/165407/2012/02/hands_on_with_apples_new_os_x_mountain_lion.html): 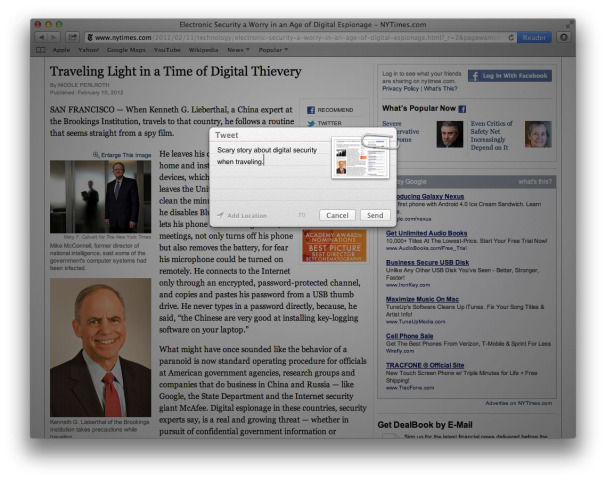 It’s hard to look at those two images and not be reminded of iOS because not only do they look similar to their iOS counterparts, but the ideas showed up in iOS first. Now, you can certainly argue that this is the ‘familiarity’ angle at play — but how does that differ from iOSification arguments? Both are saying the same things: stuff is being brought from one OS to the other OS in order to make both more uniform and familiar.

I believe Apple is trying to make all their OSes more simple and it just so happens that the most simple OS available right now *is* iOS. Therefore it only makes sense that Apple would want to make OS X more like iOS — in that iOS is far more popular and far more simple than OS X.

Here’s [John Gruber on what Mountain Lion is doing](http://daringfireball.net/2012/02/mountain_lion):

>The recurring theme: Apple is fighting against cruft — inconsistencies and oddities that have accumulated over the years, which made sense at one point but no longer — like managing to-dos in iCal (because CalDAV was being used to sync them to a server) or notes in Mail (because IMAP was the syncing back-end). The changes and additions in Mountain Lion are in a consistent vein: making things simpler and more obvious, closer to how things *should* be rather than simply how they always have been.

Exactly. Dalrymple is right that Mountain Lion “is about familiarity and integration”, but Apple is making those changes by bringing more iOS features *to* OS X. That’s how they are gaining the familiarity.

[Michael Schechter correctly points out how Mountain Lion is moving us towards the future of apps for iOS *and* OS X](http://bettermess.com/responsive-app-design/):
>The expectation would be one unified application that has been seamlessly thought through at all levels, making the distinction between mobile and desktop that much more irrelevant. This could inevitably lead to a unified App Store with truly universal apps that span both OS X and iOS.

Making OS X more like iOS is not a bad thing — iOS is fantastic — just so long as OS X is made more iOS like in only the areas that it clearly needs to be more iOS like. Thus far, this is exactly what Apple has done.