The best weather app on iOS is Apple’s own weather app, but it’s only available on the iPhone for some damned reason. It used to be among the bottom tier of weather apps, but the addition of the current location and hourly forecasting moved it to the top of the list. A very close second is [My-Cast](http://itunes.apple.com/us/app/my-cast-weather-radar/id348779486?mt=8), but it’s starting to get long in the tooth.

So we have a useable — serviceable? — weather app on our iPhones, but what about our iPads? Sadly, we face a choice between bad and useless on the iPad.

Just the other day I browsed the app store, looking only at paid weather apps for the iPad. There seems to only be two types of displays that developers are using.

The first display design are modeled around LCD weather “stations” that *used* to be popular among the Sharper Image crowd. This is the type of weather app that generally looks like this: 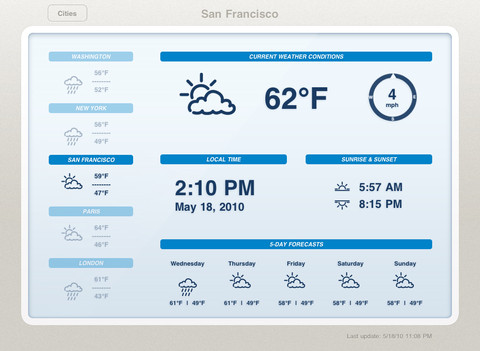 It’s not bad, but I would argue it’s not even scratching the surface of possibilities given the device that is powering it. These types of apps are static, not interactive, and that’s bad.

The second type of app is what I call a demo app — it’s an app that looks and works fantastic for giving a demo, or presentation, to someone — but when you get right down to it, it too sucks. The best example of this is [Weather HD](http://itunes.apple.com/us/app/weather-hd/id364193735?mt=8). It’s a beautiful large graphic that is clearly taking advantage of the iPad, just not in a way that helps someone wanting weather information.

By and in large most of the “new” weather apps I see on the iPad app store take this approach:

1. Show incredibly beautiful graphic of the current weather conditions.
2. Relegate all other (more important) weather information to a smaller section of the screen.

I cannot be clear enough: I hate these apps.

In my mind, they are completely useless.

### Both Display Types are Useless

Thinking about it a bit more I actually think it is fair to say that both display arrangements are fairly useless, because both assume the same thing: that the user is going to leave their iPad on, and with that app up in the foreground.

That’s the only way these apps become useful: if you are dedicating your iPad to the display of these apps. ((To be fair, weather apps are not alone in this category.)) The problem with that is that weather data is begging to become interactive.

Radar maps look like they are from the 90s, and yet they could be so much more. [Take a look at the wind map across the U.S. to see just how amazing weather data can be if we try](http://hint.fm/wind/). You may think that wind map isn’t useful, but I actually learned quite a bit by looking at it and the way the wind was moving throughout my corner of the country, but just imagine what we can do with precipitation and temperatures…

### Is There Anything Good?

Short answer: no. Longer answer: [Seasonality Go](http://getseasonality.com/go/) is about the most interesting of the iPad weather apps ([still](http://brooksreview.net/2011/04/seasonality/)), but it’s not very nice looking. Where it lacks in design, it somewhat makes up for it by making graphs and layouts interactive. Additionally the Radar map actually works — and does so quickly. It’s not good, but it’s the only thing I found worth keeping on my iPad.

As I said above, it seems to me that developers of weather apps for iOS have reached an impasse, where they can’t move outside of the box of current weather display methods. The last thing the app store needs is another Weather app that shows a giant sun radiating heat with the temperature data shoved in the corner.

What iOS needs, the iPad specifically, is a weather app that asks what a user truly wants and needs — because I really doubt there are many people that want to buy a $500 device to leave it in a stand showing your fantastic radiating sun all day long.

UPDATE: Some confusion over what I am trying to say here. First that weather apps suck right now. Second that the weather data needs to be more interactive. If you are wondering what a “perfect” weather app for me would look like, I can’t tell you. I think that, right now, developers are just trying to show weather states and temperatures, instead of asking what a user wants to learn from weather info, and that goes beyond: “do I need an umbrella?”