Looking at how Airmail stacks up for a loving Mail.app user.

Since I made the switch to OS X in 2004, I have found myself to be a very loyal Mail.app user. I was a regular reader, and huge fan, of Hawk Wings (now apparently offline) and through the things I learned there I tweaked Mail so that it worked correctly. It never was the fastest tool, or the most friendly, but I was always able to get the job done.

And then I installed the Yosemite developer preview and Mail.app was effectively broken for me. It crashed every time I tried to create a new email message ((Unless I used an AppleScript to create the message.)) , or tried to forward an email which contained an attachment. Brutal.

Over the years I have tried many third-party email clients, but all of them left me wanting to go back to Mail.app — and since there is no Dispatch for OS X, I was determined to find something else.

People had mentioned Airmail to me, but I hadn’t tried it — importantly though I thought I had tried the app — so I dismissed it for a few days, until I noticed I didn’t own it. I downloaded a copy and set it as default.

I’ve been using it everyday for some time now and I honestly still don’t know how I feel about it.

Unlike many of the other apps out there, Airmail doesn’t try to make a game out of your email. It’s just email, and Airmail seems to get that. Which is something I can greatly appreciate, since I mostly just want to get in and get out of email.

Importantly, Airmail integrates with apps like OmniFocus, Fantastical, and Reminders. Which are nice additions to have baked into the app at the native level. Unfortunately to make use of these additions I must learn new shortcuts — so I didn’t test these too heavily.

Mail.app is a bit long in the tooth — even the Yosemite version — but Airmail is different. That’s not to say it is necessarily better, but it is different.

Personally I loathe the way the title bar looks in Airmail, with the faux layering and depth effects. ((There is a ‘classic’ option for the titlebar which is all silver, but that looks worse to me.)) Hopefully a Yosemite update comes to fix this, but it feels too much like Tweetie for the Mac and that just makes me sad for the loss of Tweetie in general.

Like all apps soon will, Airmail primarily uses Helvetica Neue as the typeface and I think that’s a shame. I’ve said this before, but there are two primary activities done in email: reading and writing. Both of those activities are type centric, so using Helvetica is a poor choice as it is neither a good typeface to read, or write with.

Having said that, you can of course choose your message font when composing — but that only tackles one of the two main activities. If you won’t let me pick how the entire app typography looks, at least pick good typography for your UI to begin with.

Speaking of composing, this app is really weird. Airmail says it handles Markdown for composing an HTML, or Rich Text email with Markdown — this is really nice — and it works.

But, and this is a large warning, you must compose such a message in a split screen view like so: 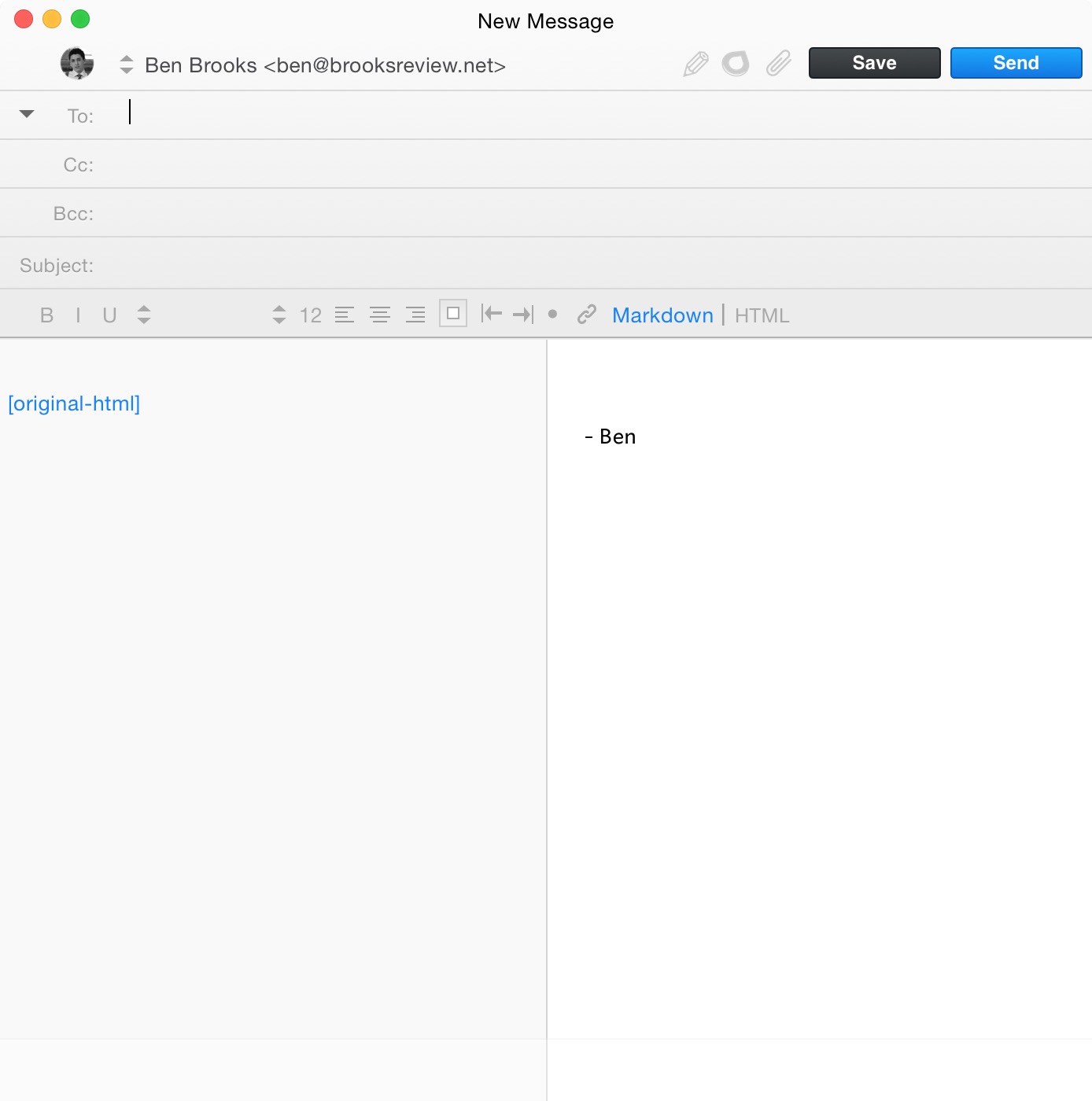 That’s terrible for many reasons:

This app doesn’t look good when you are composing even a plain text message. Take a look at how this app handles text when writing in plain text: 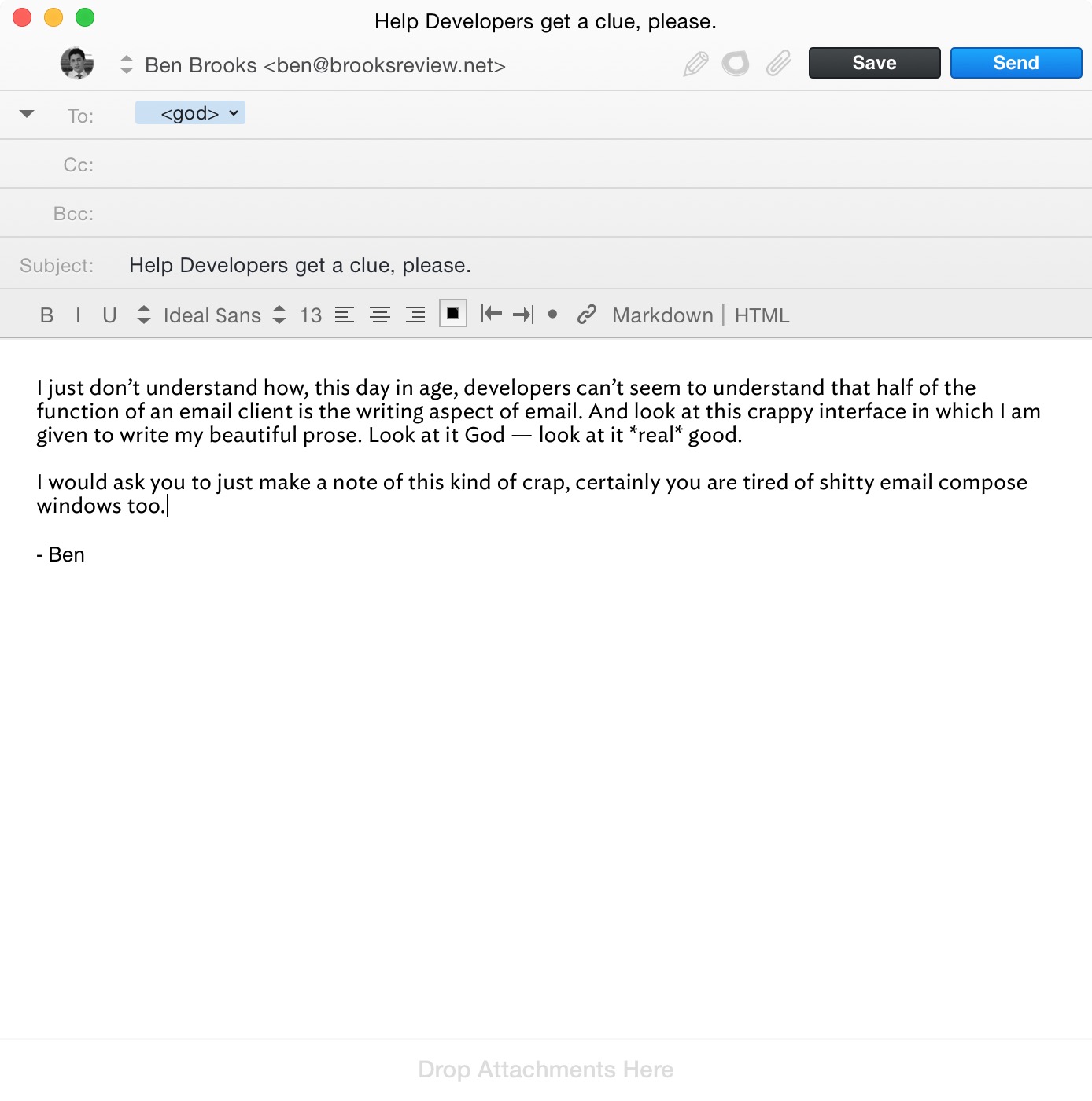 Now take a look at how I would make that window look if I could: 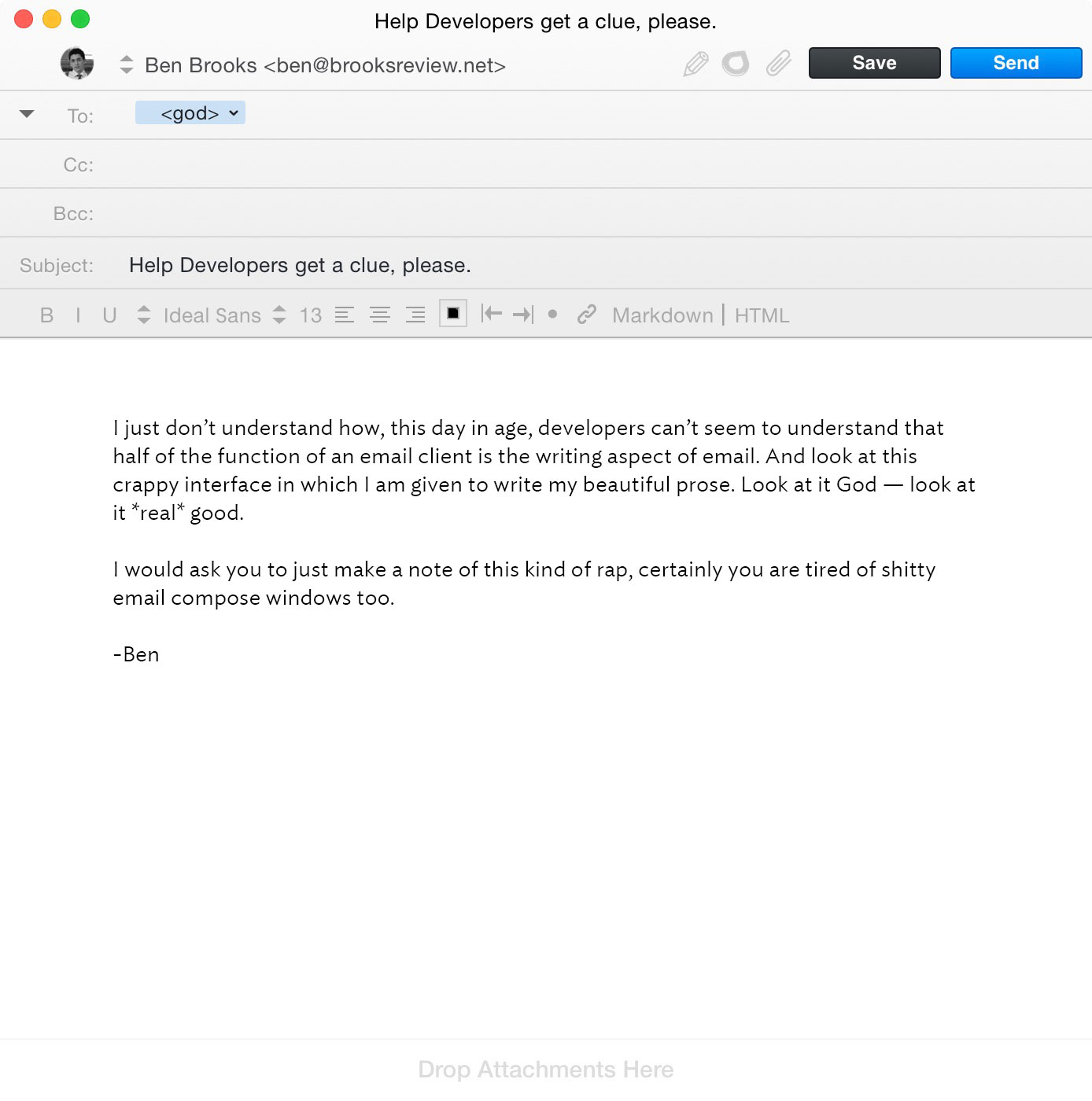 I just don’t get why simple margins and line spacing is missing — so that we may at the very least have a pretty window to look at when we are dealing with the hell that has become email. The changes between my version and the actual version are subtle, but that’s what is so crazy to me — this isn’t rocket science.

I mentioned above that Airmail integrates with OmniFocus, but it does this by a service the app calls “Dispatch” where it opens the Quick Entry dialog for OmniFocus and has info pre-filled for you. This works well, but there’s one thing missing: the app needs a Dispatch & Archive feature so that I don’t then have to go back to Airmail and archive that message after I add it to OmniFocus.

I send it to OmniFocus, and the app archives the message — that’s how it should be.

Speaking of archiving, one of the best features of the app is the ability to reply to a message and, upon sending that reply, archive the original message. I’ve long had a script/rule setup in Mail.app to do just this, and I find it to be a killer feature. (Dispatch on the iPhone recently updated to add this support.)

The one feature of Airmail, which I didn’t catch initially, that pleases me greatly: per account auto-BCC/CC settings. In the account setup screen you can specify an email, or email addresses, which get auto-BCC’d when you send a message with that account.

Now you can do that in other apps, and even in iOS, but typically it is all or nothing and not per account. All emails get that BCC, or no emails — here my personal and work emails can be handled differently. My work email account can auto-BCC Highrise as required, but my personal account BCCs nothing. I love this, and it will save me a lot of time.

One minor, but solid, feature is the ability to add files to the message via Droplr. This works, but it’s a bit counter-intuitive. I assumed that you could add attachments to the message and then decide to send them via Droplr, but this is not the case. In fact you have to hit the Droplr icon in the compose window and select the files you want to attach via Droplr, then the links are inserted.

That’s a nice feature, but it could have been implemented in a better fashion. It would be great to be able to attach files normally, but then after seeing the size of those attachments quickly switch to Droplr. ((There is a Mail.app plugin called CargoLifter that does just this.))

The last feature I want to mention is a really nice touch. In the advanced settings pane you can add in a send delay. We’ve all sent plenty of messages only to immediately say “WAIT!” as we realized we mis-addressed, or failed to attach, something. You can setup a delay between 5-120 seconds in Airmail and the app simply holds the email and sends after that time. This so far hasn’t helped me yet (as I haven’t run into a use for it), but I really do like it because I know it will help at some crucial point in the future. I set mine at a 30 second delay. A great way to look less amateur. 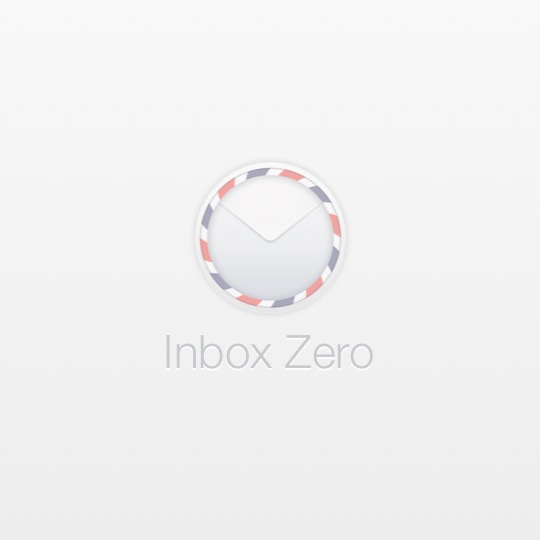 Aside from the UI design, there are two things about this app I find rather annoying. The first is the message that is displayed when your inbox is empty: ‘Inbox Zero’. For an app that seems somewhat serious about email, this bit of gamification really bugs me. It’s a minor annoyance, but I still don’t appreciate it.

Update: The below may also be a Yosemite issue, and not a flaw in the app. I have yet to confirm this, but be aware that email attachments may work by dragging to any part of the message. If true, that’s great. 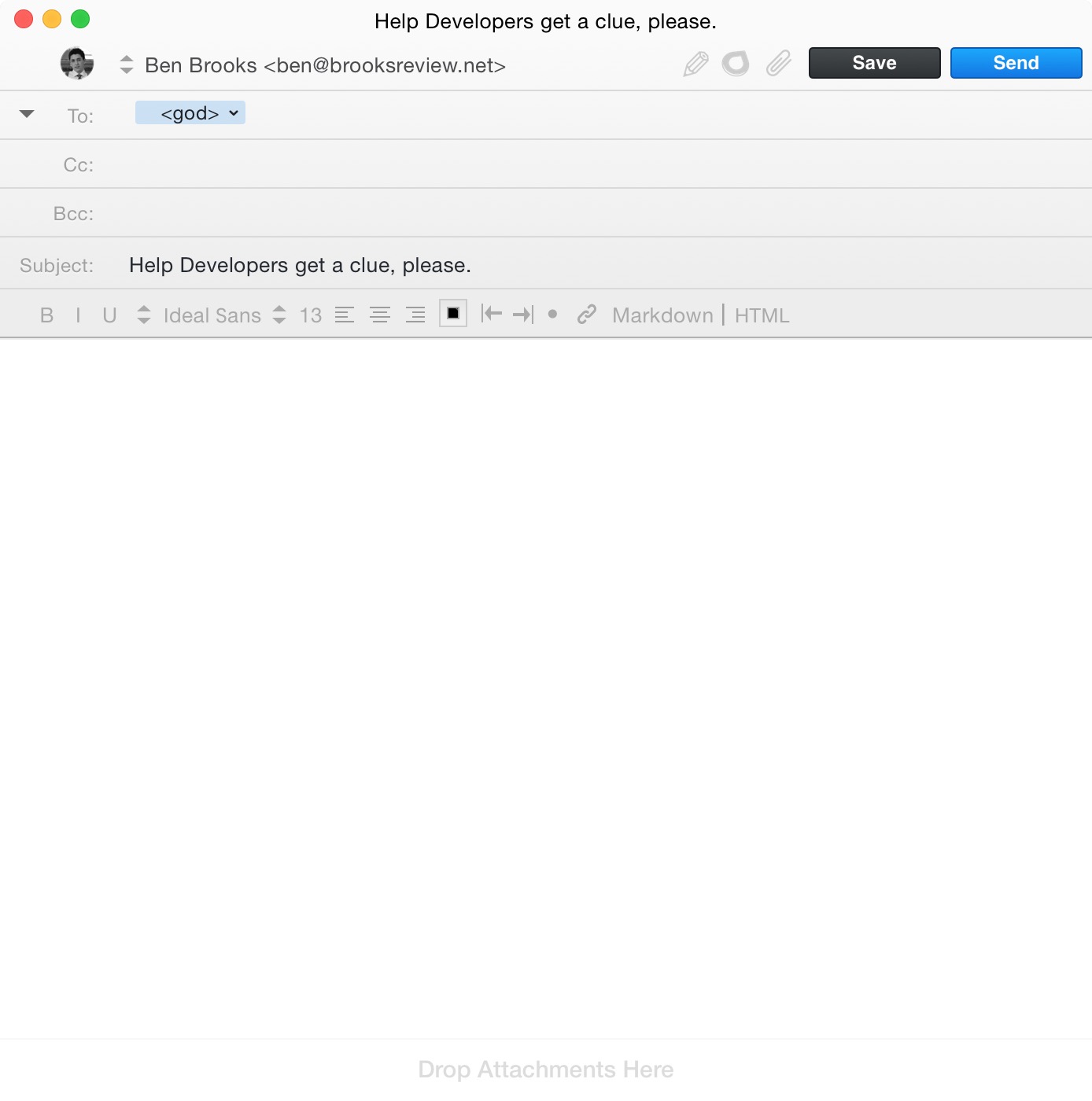 Do you notice that strip along the bottom of the message, where it says “drop attachments here”. Yeah, that’s the only place where you can drag and drop an attachment. This works contrary to the philosophy of Mac OS X itself.

What’s even more crazy is what happens if you drag a file to the body of the compose window, as you are shown a green plus symbol indicating that you can add the file. Only to have that file not be added when you let go.

No, the only way to add an attachment to an email is via contextual menus, or dragging the attachment to that little bar at the bottom. That’s just lunacy.

I came across one search issue, where search wouldn’t find emails that I knew existed. I cannot rule out a Yosemite issue on this, so for now I just want to mention it while I wait for a full Yosemite update to the app.

For me Airmail versus Mail is a really tough call, and I think I need to wait until both apps are official Yosemite apps to decide. I actually like Airmail despite its quirks, but I certainly don’t love the app. It works better now than Mail.app on Yosemite, but Mail.app will have more features when Yosemite launches (and will likely win me back).

However, if you are looking for something else, Airmail is a pretty solid option.