Sometimes I just want to focus on writing, I find the iPad is best for focus. Now I need a keyboard to use with it.

As most readers of this site probably know by now, I was never a very big fan of mechanical keyboards. When Shawn Blanc started to get on board with them I would poke fun at him on our podcast on a regular basis.

I just never understood mechanical keyboards, because who wants a loud keyboard?

Nevertheless, I tried the Matias Laptop pro, which used MX Cherry Brown switches, and for the life of me I couldn’t hate that keyboard more. I’ve also tried the DAS, and no thanks, I already have poor hearing and I don’t need that loud of a keyboard to make it any worse.

Everything was too loud for me to see any benefit, or too mushy to like typing on. Then I found the CODE, and well you know the rest — I’m a mechanical keyboard loving fool now.

A little while ago, I came to my office just armed with my iPad. It was one of those days where I knew I was going to be leaving early to travel and didn’t want to travel with my laptop — nor leave my laptop at the office. So it was an iPad only work day.

I posted a picture about it, because I just loved the setup. 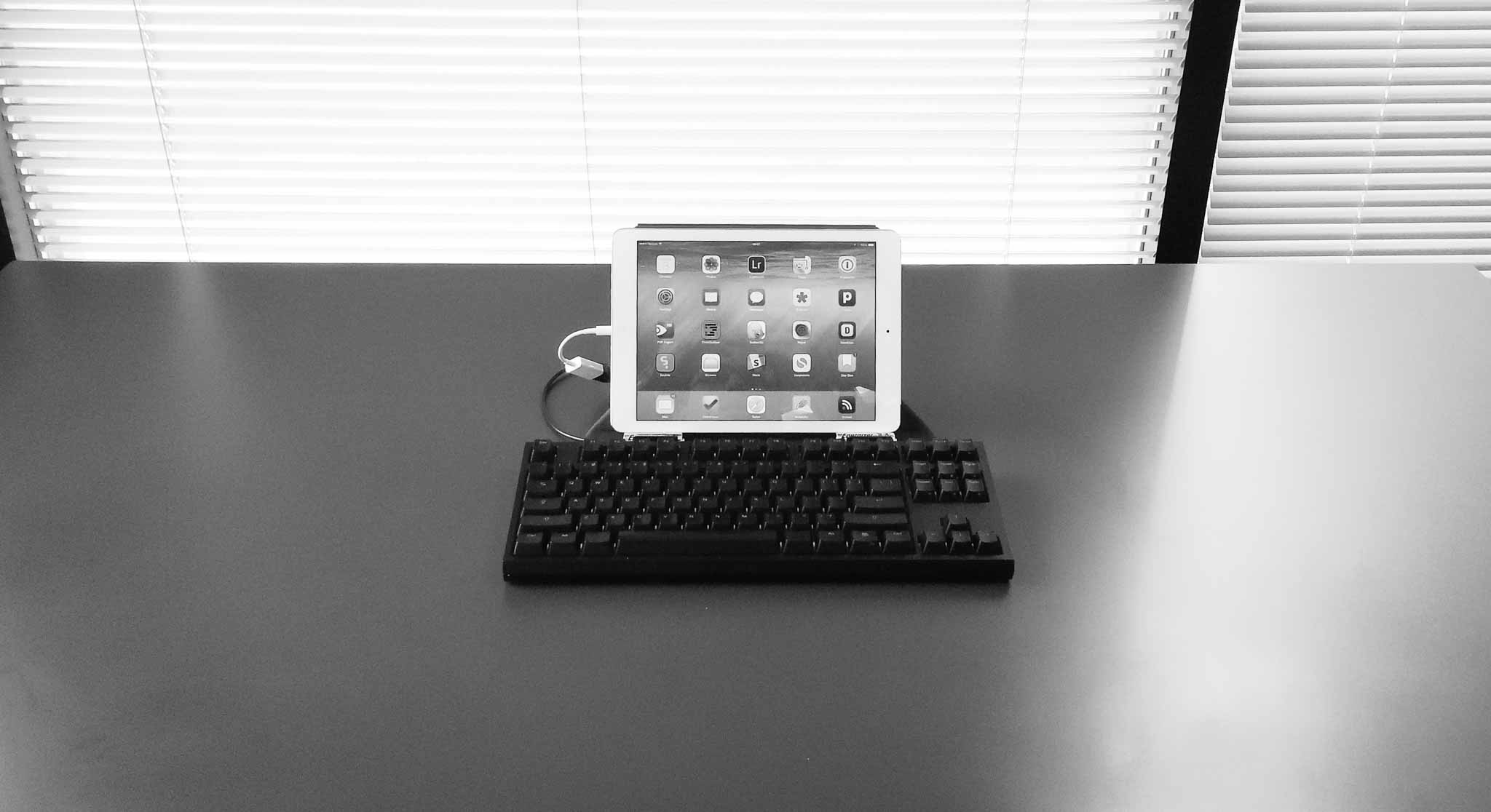 You see I really loved the setup, but there were obvious issues with it. The two issues I ran into were/are:

So, what to do then?

MassDrop to the rescue.

Two things came up on MassDrop which I did not know about beforehand, and actually solve this problem in an interesting way.

The KBC Poker II came up, and it is a very compact mechanical keyboard which also is sold with Clear switches. Boom, purchased.

Now to connect it to my iPad, wirelessly. I recalled that I had seen on MassDrop the Handheld Scientific USB to Bluetooth Keyboard Adaptor (product naming FTW). Comically this device works with all Bluetooth devices except Macs — but it does work with iOS. Reasons for this are very unclear to me. ((Comically the site says: “If Mac support is important to you, let us know.”

This makes the setup easy, but ugly: Wired keyboard to Adapter, Bluetooth to iOS.

Amazingly this works exceedingly well and has no issues which I can find and the battery life is outstanding. 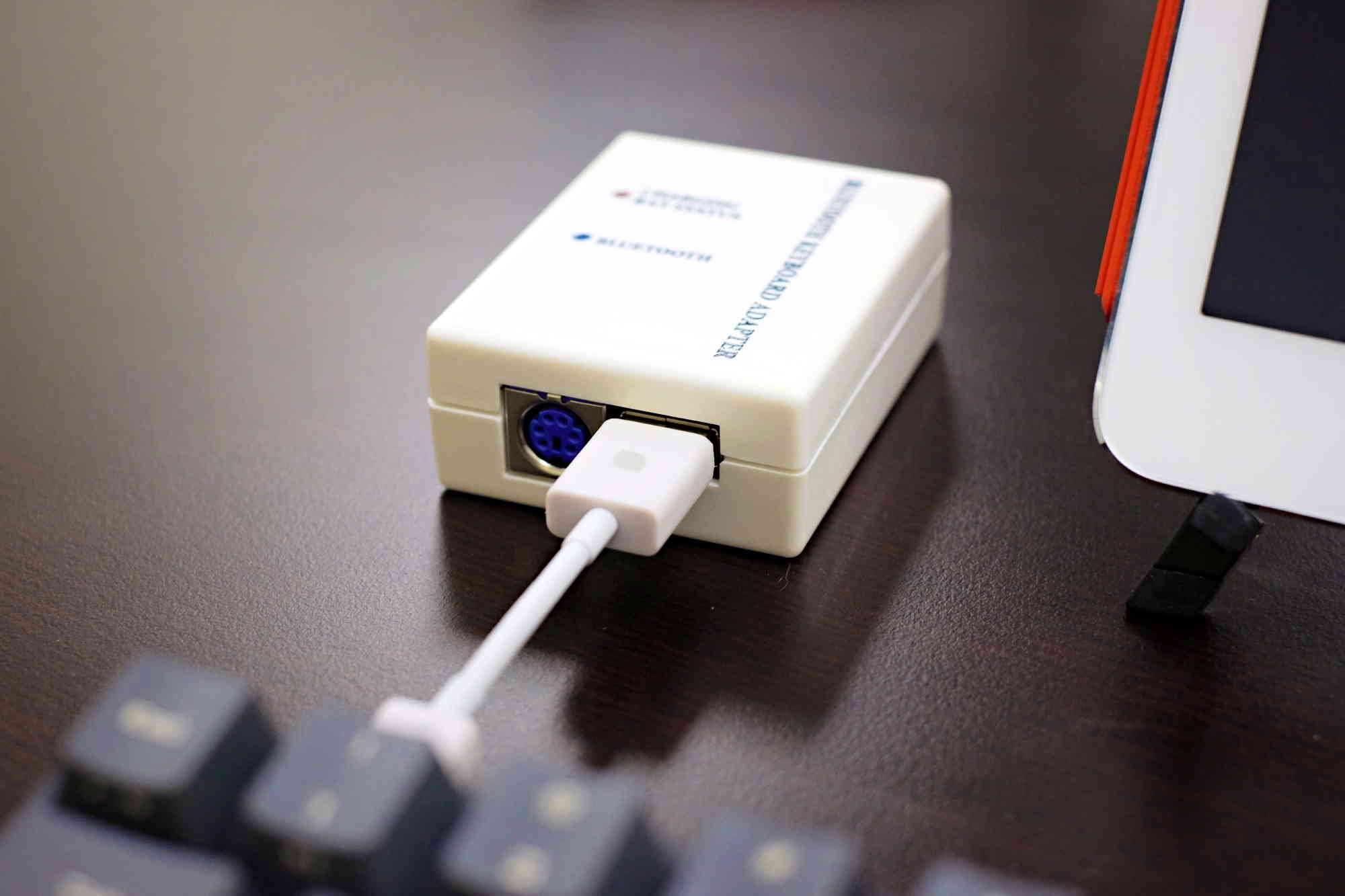 There are also ergonomic concerns over typing on an iPad — mostly that it is too low and you end up looking downwards at the device.

I’ve yet to solve any of this. I’ve heard rumors of people trying to install the bluetooth module into a custom case, and I’ve thought about 3D printing my own iPad stand that houses it, but that’s all far too time consuming for what time I have.

So for now I am stuck with the awkward and ugly setup, which I typically use like this. 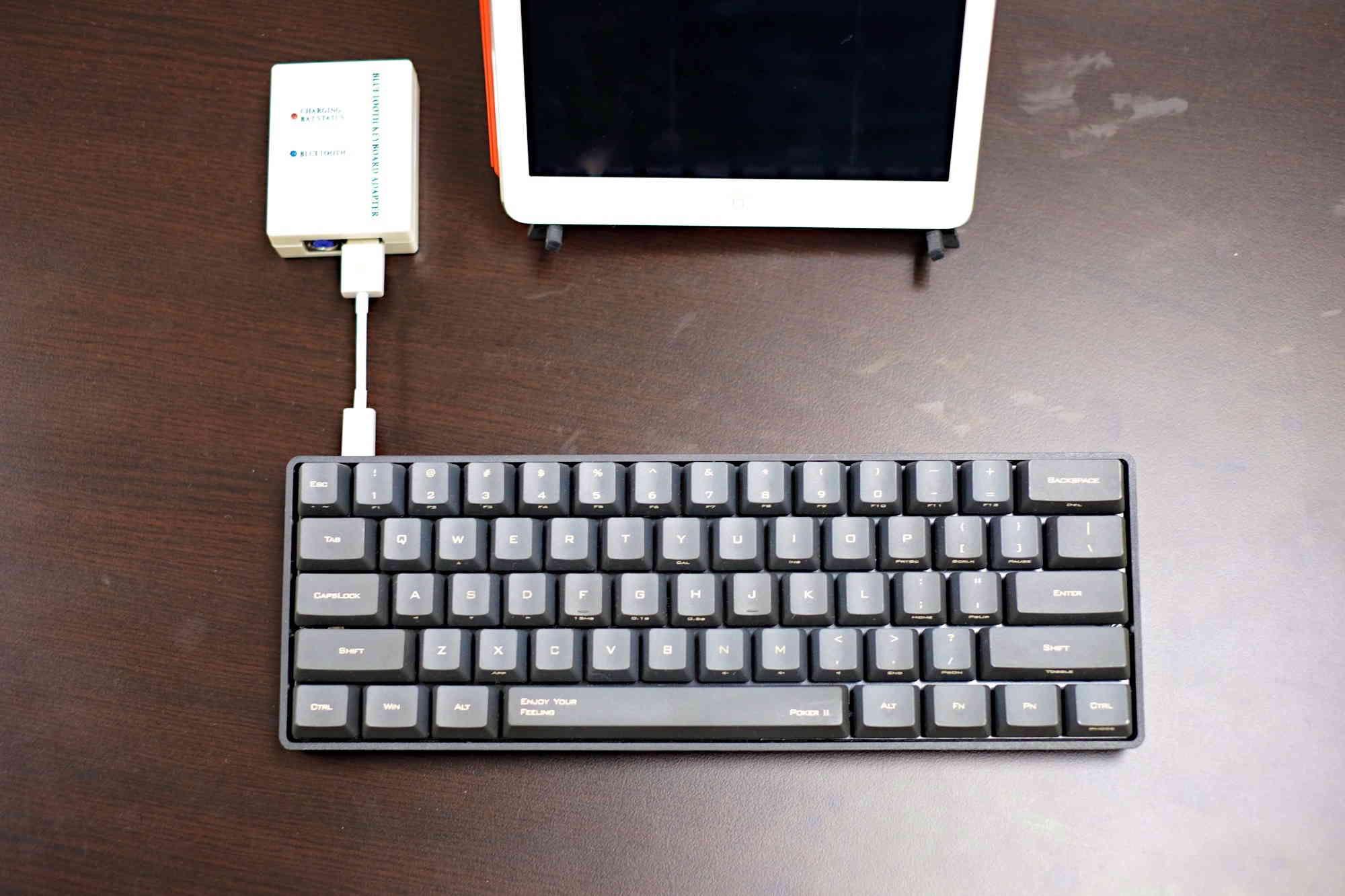 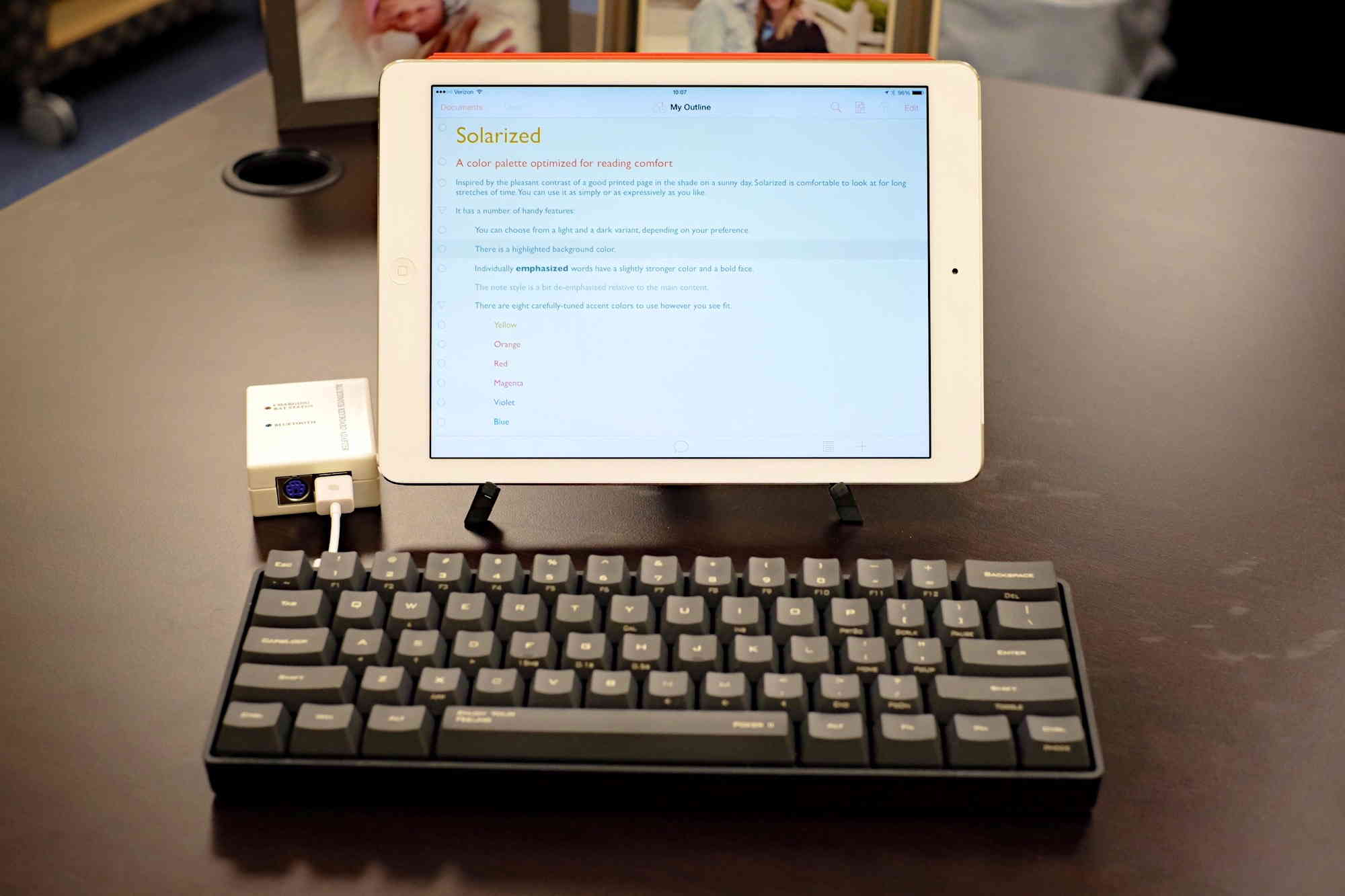 A bit of a side note: I have also been looking at what available options there are for lifting an iPad up to eye height. So far it looks like the most viable option is Twelve South’s arm, but I really don’t like the company so I may need to find a different option.

If you have any that you’ve used, get in touch.

On The KBC Itself

I almost forgot to talk about the keyboard itself. I have some issues with it: 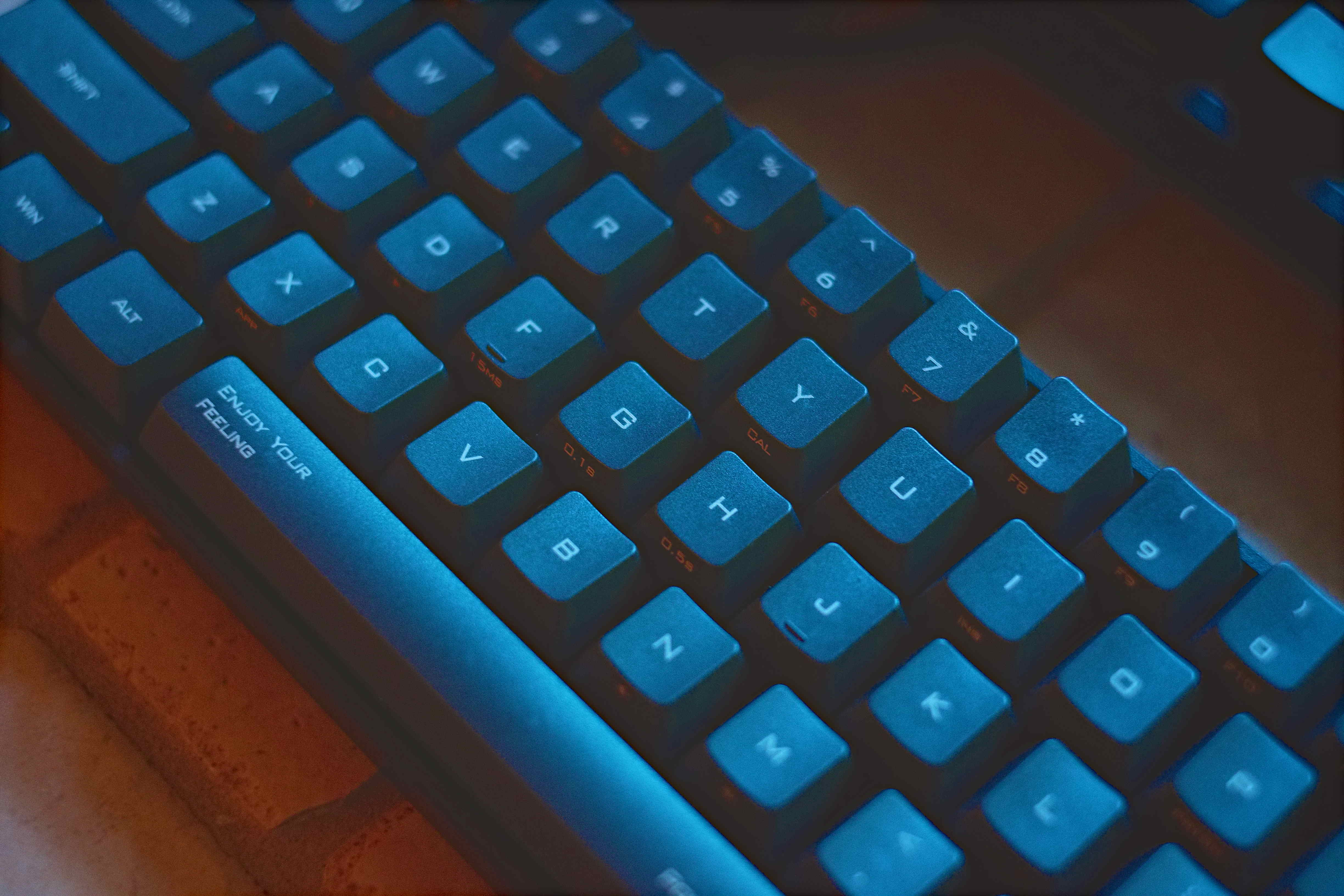 Overall this is not a perfect keyboard, but it is as close as I can find with the key switches that I like. It’s small, but full-sized. I’d love to see what a non-full-sized keyboard would be like if it was still mechanical in the nature of most iPad specific keyboards.

For me choosing to write, or travel, with the iPad over a Mac isn’t so much about space — as I still take a large keyboard with it — it’s about focus. I always feel like working when I travel with a Mac, but with an iPad I feel free to relax a bit, while knowing I can still work if I want.

I love typing on the iPad, I just wish there was a better iPad app to write in. I am now impatiently waiting for Ulysses to appear in the App Store.