I’ve long owned Due, but it always just kind of sat there being unused — I often didn’t even have it installed on my phone. Lately Justin Blanton, and CGP Grey have been talking about it — in fact it was the latter of those gents that got me interested in picking the app back up.

CGP Grey talked about how Due is great for reminding you of things, as the app notifications on your Apple Watch will tap your wrist every minute until you tell it you did that thing. Which is quite perfect if used correctly — I immediately put Due to work.

I figured out three really important things I need to put in there for constant reminders: stopping for lunch, stopping for dinner, and taking the garbage/recycling out the night before. I can’t even tell you how nice this is — and I am not joking around. 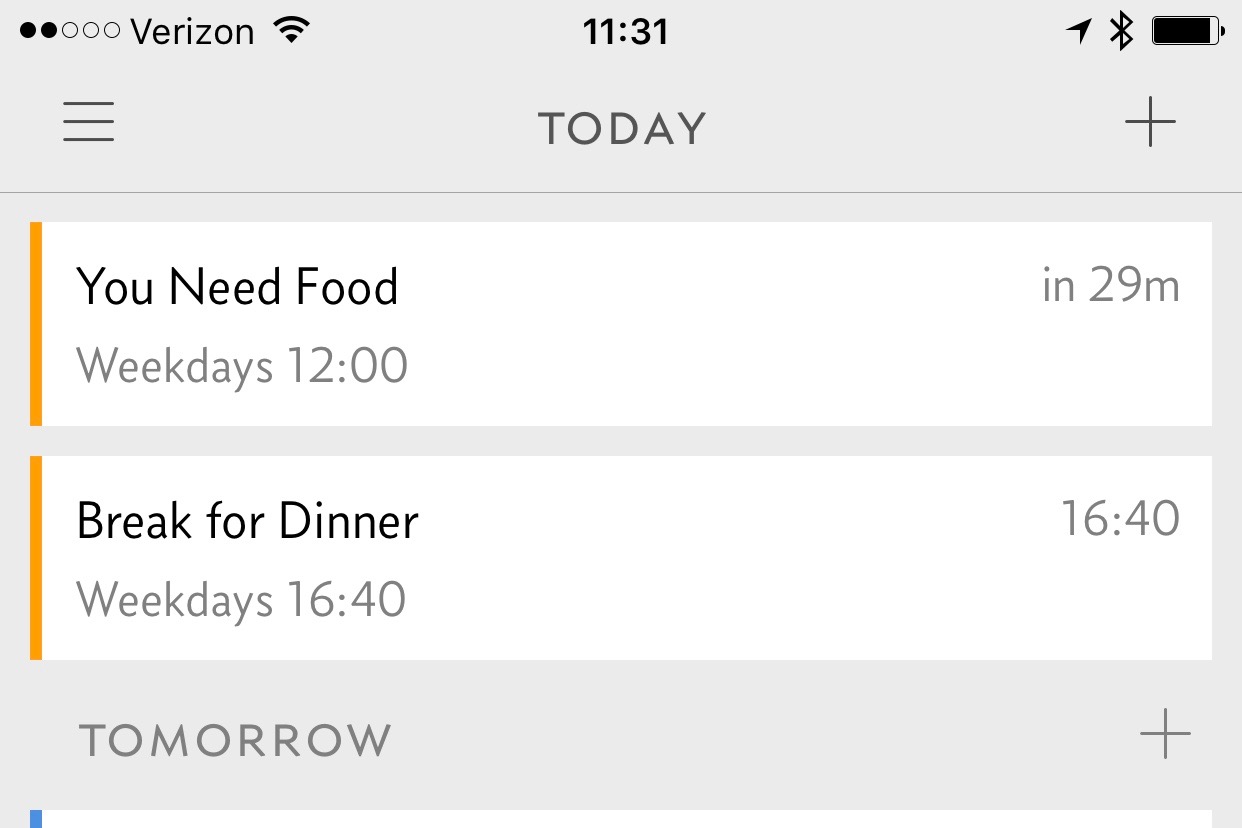 After a week I was amazed at how well that little reminder worked to get me out of my chair — it’s like the “Time to Stand” Apple Watch notification.

If that was all I were using Due for, you could easily hide the app away, but instead I’ve found another use for Due — in addition to those static (and repeating) reminders — having Due be my short term memory.

It’s not that I have a bad memory — I tend to get what I need to do done. It’s also not that I don’t track things in a task manager — I do very well with OmniFocus. It’s just that there are these small types of things that I always forget.

Maybe it’s calling someone in 15 minutes. Or sending an update in a few hours. Or making it to the post office before they close. Those small time sensitive things that just don’t work well in something OmniFocus. Before I never forgot to do these things, but I often did them much later than I would promise.

I call them my short-term memory tasks and they are amazingly well suited to Due. There’s one simple reason for this: Due doesn’t ever let me forget. As long as I don’t cheat (by telling Due I did something when I did not do it), Due will pester me until I do what I said I wanted to do.

Every minute — until it is done.

That sounds terrible to read, but I use it so sparingly that the Due alerts are all high value alerts for me. They are things that I know are important and need my attention right then. And when I drop something in Due, I can trust the system because the system works so damn well.

I can’t imagine using Due for all my tasks, but for those things that I really need to get done by a particular time: you really can’t beat Due. For everything else, OmniFocus just can’t be touched.

Go get a copy of Due.