The least favorite knife I own.

I was recently perusing Huckberry — something I really should not do — and I saw the Fave knife. It’s a 4” fixed blade, full-tang, knife with an interesting tag line:

With this in mind, we set out to create the perfect take-it-anywhere, use-it-for-anything knife, the one that you would always keep close by – for slicing vegtables, cutting a rope or opening a package. A simple, well-built, useful knife that would be equally at home in the kitchen, a workshop, on your desk or out in the backyard.

Oh really? So I picked one up because I had to know. I mean I really had to know: could a fixed blade knife really be a true utility knife? I was skeptical if this knife could both be good around my garage, and also good in the kitchen. 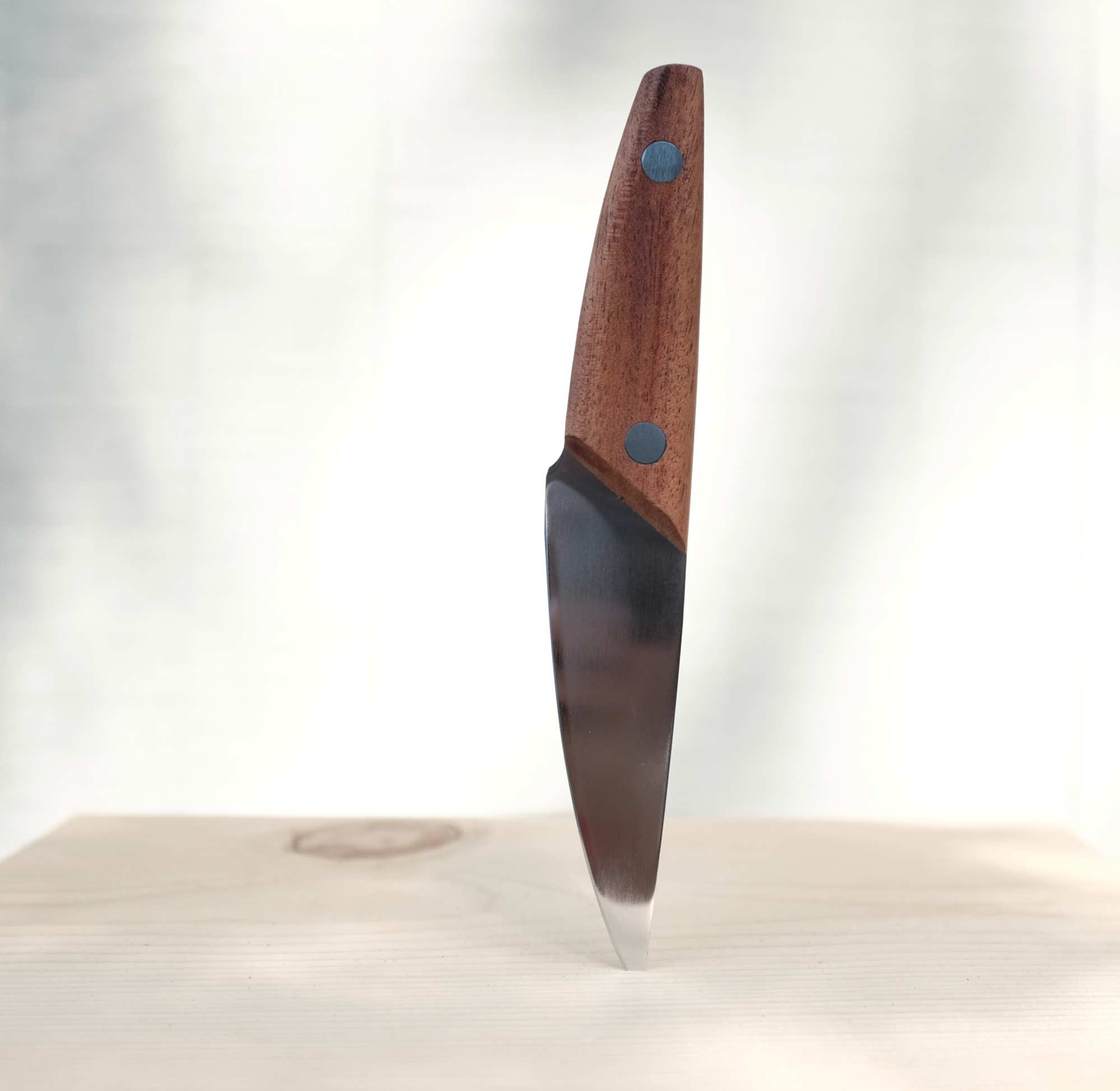 I’ll dive into the specifics of the knife further down, but no matter how, or where, I used this knife it just wasn’t a great knife. And yet the knife is $65, and compared to a $30 pocket knife I own the Fave doesn’t even come close to living up to that. The Fave was, and is, a supremely disappointing knife. 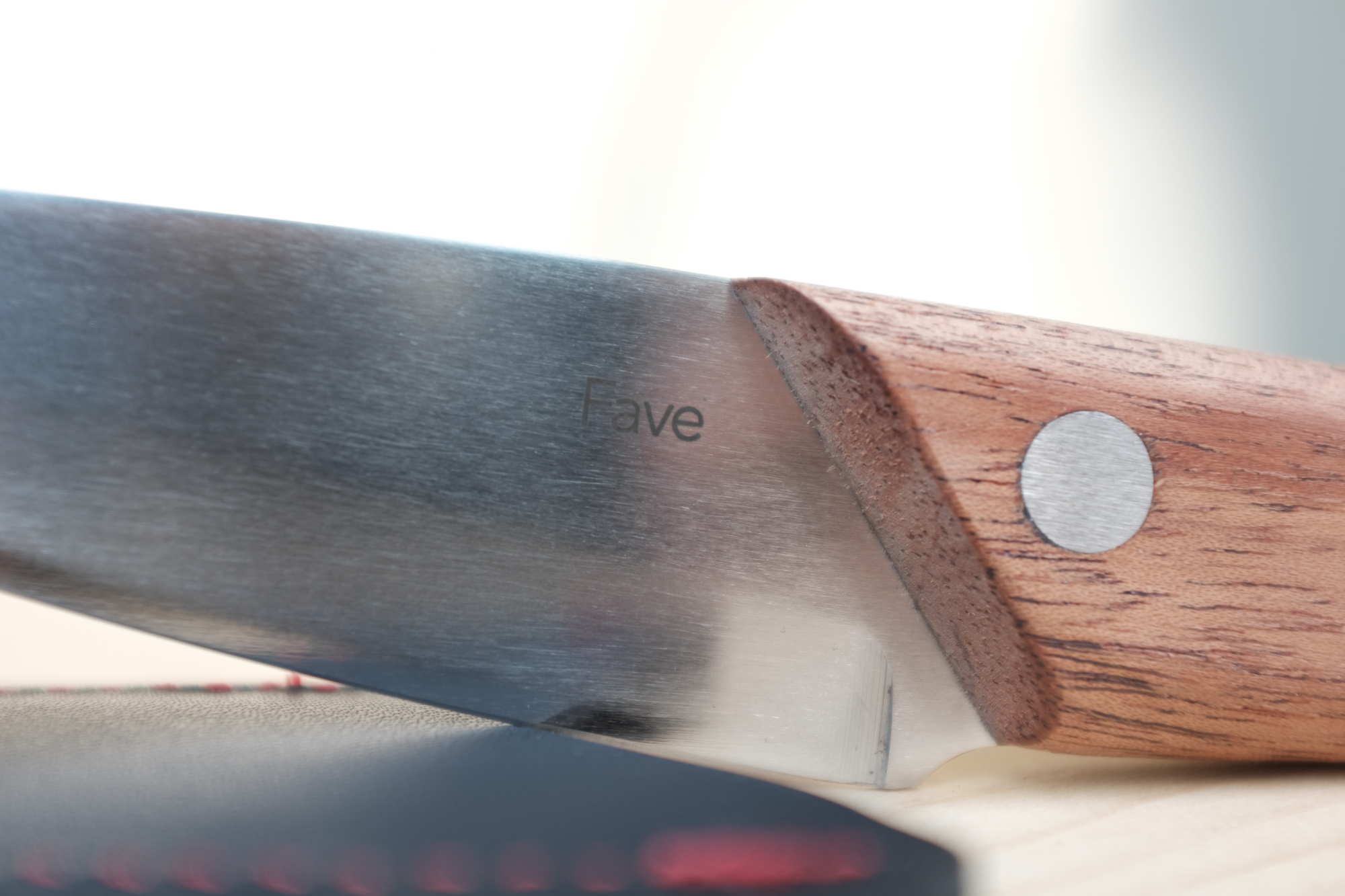 But, allow me to elaborate for those still interested in knowing why. 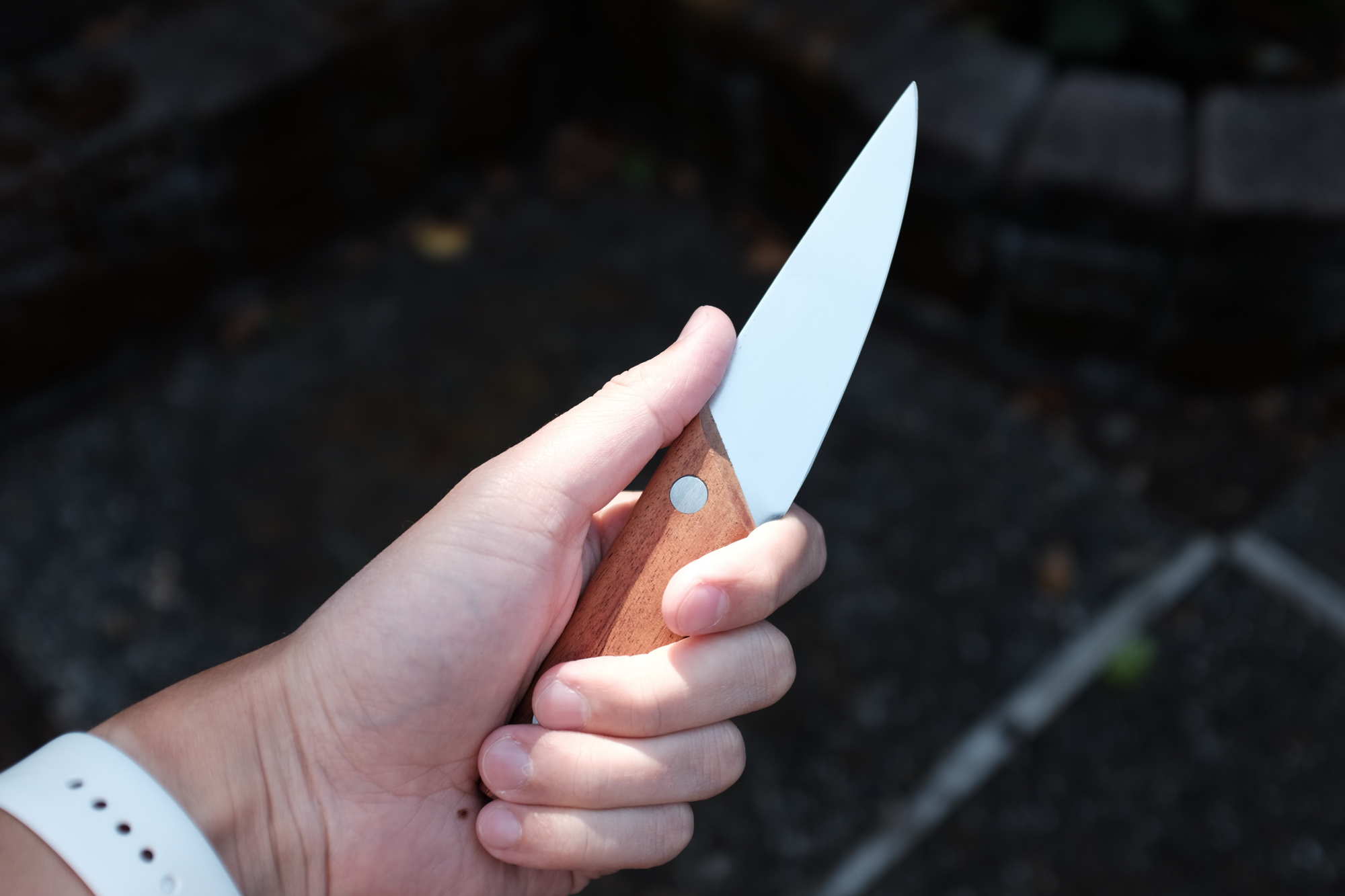 And that’s where I have the biggest issue with the Fave. While it fits in my hand just fine — despite looking like it may not be comfortable to hold — it doesn’t actually handle very well when cutting. Because of the tapered nature of the handle, it feels comfortable in your hand — light even — but you are primarily relying on your index and middle finger, as well as your thumb, to provide all the leverage for cutting.

In a more standard fixed blade knife the handle would be less tapered, or even larger at the heel, thus allowing you to use your entire hand to provide leverage to the knife. The Fave bucks this trend, and it is not a beneficial design decision. 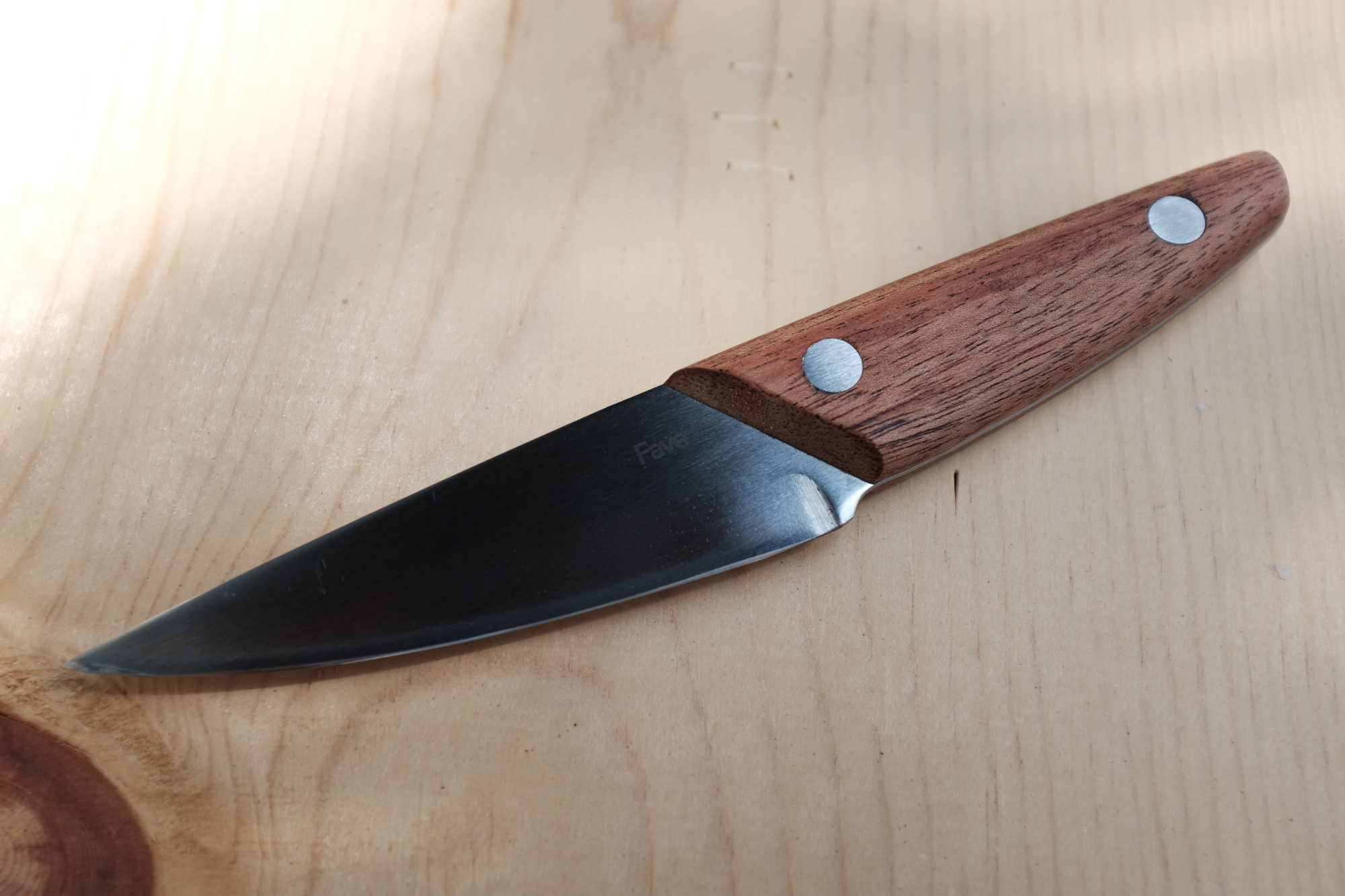 The blade itself is also problematic, even for tasks when leverage is not as necessary. The blade shape is in a long curve, and is fairly thin for a fixed blade knife. This — I think — was a decision made so that it could handle food better than the average fixed blade knife which is typically thicker steel. 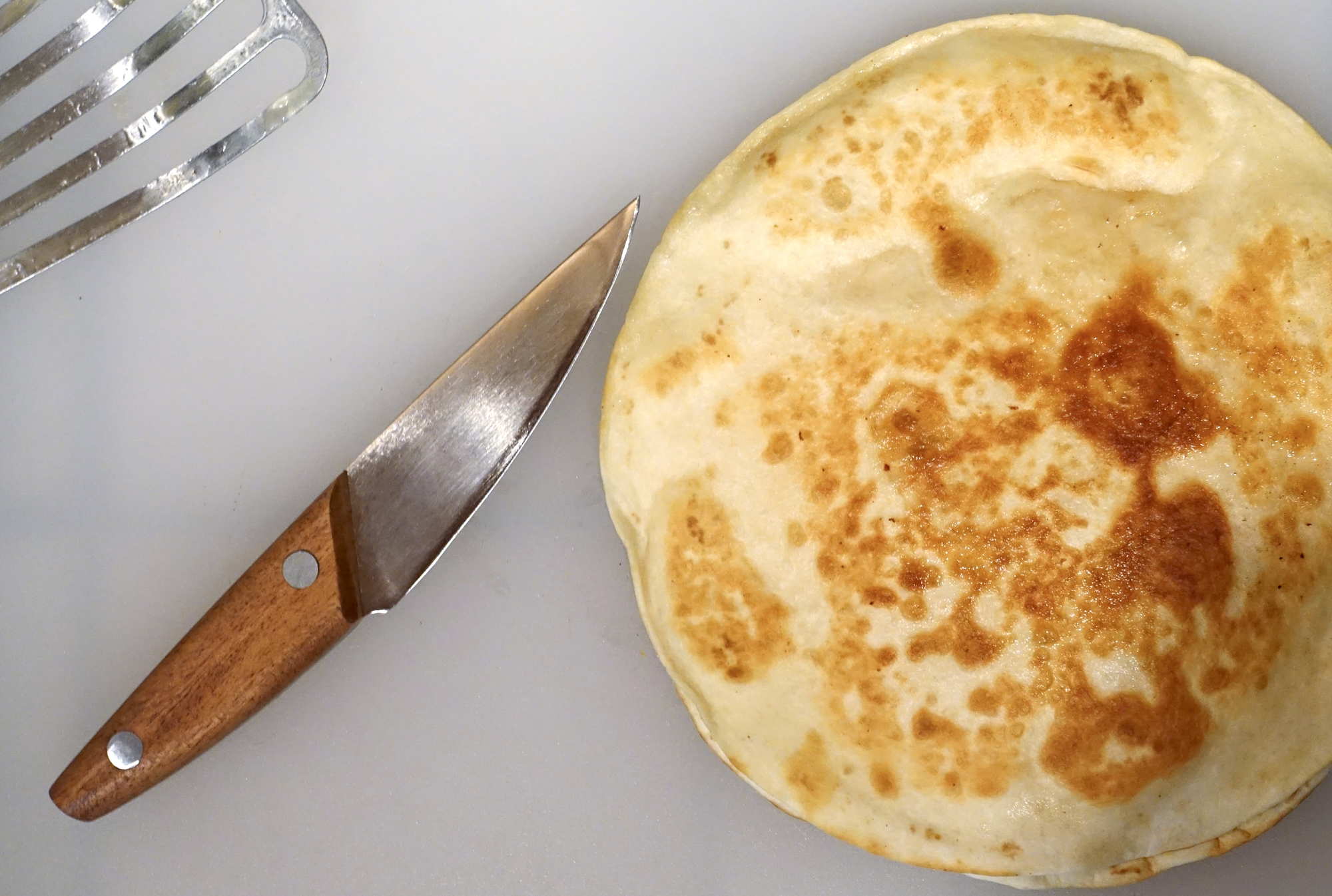 The Fave handles food ok, but not nearly as well as just about any of the other kitchen knives I own. It’s an odd mix, and the phrase which comes to mind is: “designed to do many things, but do none of them well.”

When slicing tomatoes the knife was plenty sharp, but didn’t have enough of a drop to the blade relative to the handle, in order to allow me to fully slice through before my knuckles were abruptly smacking into the cutting board. Even peeling apples, something most of my pocket knives do well, is a challenge. The blade shape lends itself to constantly cutting a tapering strip of apple skin instead of a nice and even stripe.

Another use listed is for Amazon packages and it indeed can cut through tape just fine. So, there’s that.

However, every outdoor use I tried the Fave with ran into one problem or another.

Look, at this point I am just piling on and I can keep going. Most knives have a compromise in some way, it just so happens that the Fave was marketed along the lines that it was attempting to be the do all knife. It certainly is not, but in trying to achieve do all status, the knife doesn’t do well in any conditions that I used it in.

To be fair: I don’t have any fixed blade knives, which are not “kitchen knives”, that do well at cutting food in the kitchen. However, none of them were marketed to be able to do that either. I think the marketing here is very misleading.

I have no issue with the blade steel chosen, but I do have issue with the handle itself as well as the sharpening done from the factory. First, another quote from the Fave KickStarter page:

With that in mind, here’s a picture of what the blade looked like when I received it: 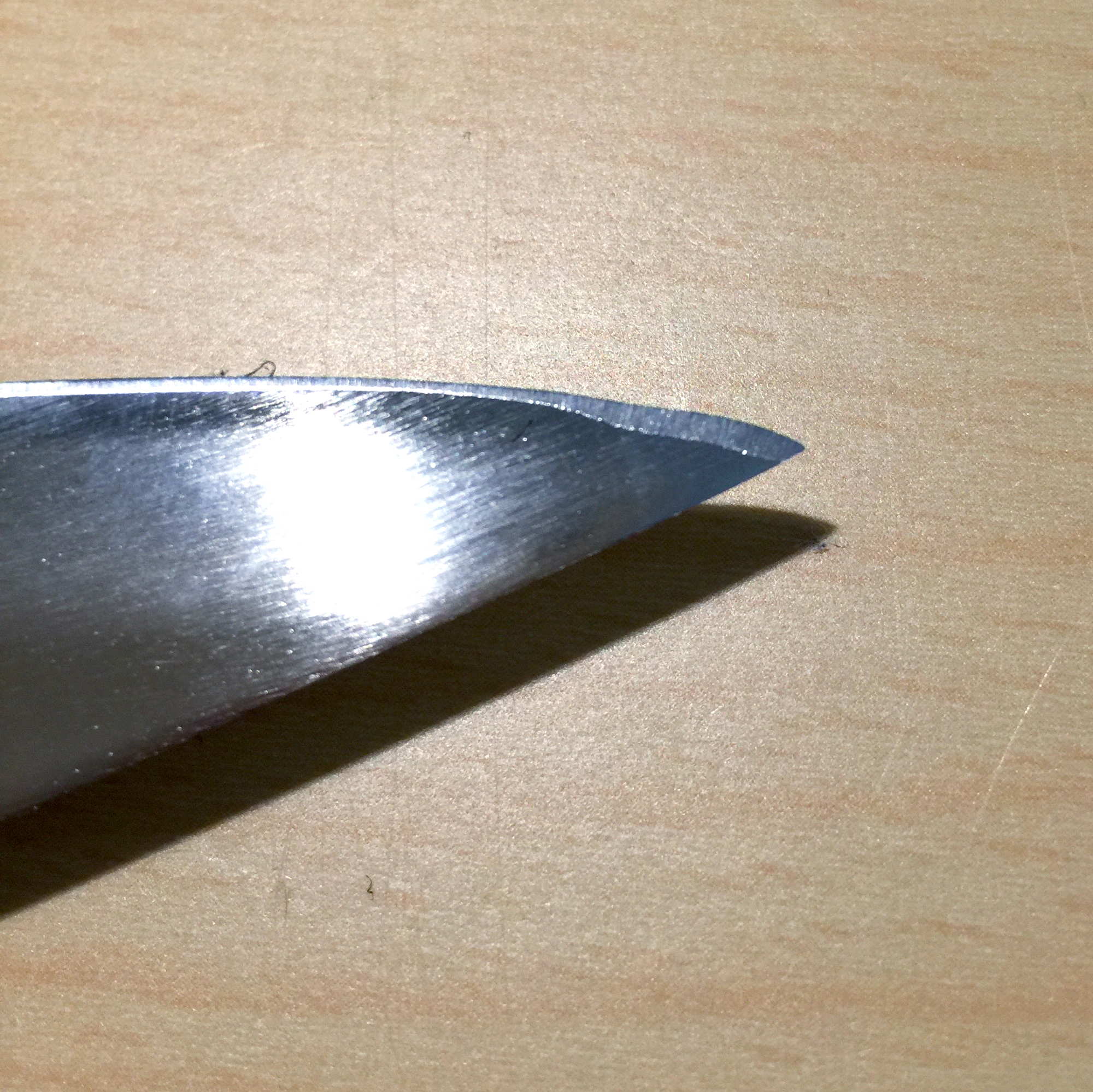 It’s extremely hard to photograph, but what you are seeing is a dip in the edge of the blade before it gets back to the point. Likely a slip when the knife was being sharpened, but a defect and crappy job nonetheless. I don’t know if all Fave knives look like this, but mine did. (I have since sharpened it correctly to remove that area as much as possible.)

So, I am not impressed with the sharpening of the blade. However the finish of the blade and the handle are very well done. So quality seems like it is fine and I maybe got a bad run.

Then we talk about durability: the handle just doesn’t seem to hold up. Remember they talk about this knife being used in the kitchen, and so I washed the entire knife after cutting some greasy food. The moment the wood handle got wet it became rough to the touch. You aren’t likely to get a sliver, but it doesn’t feel nice anymore. 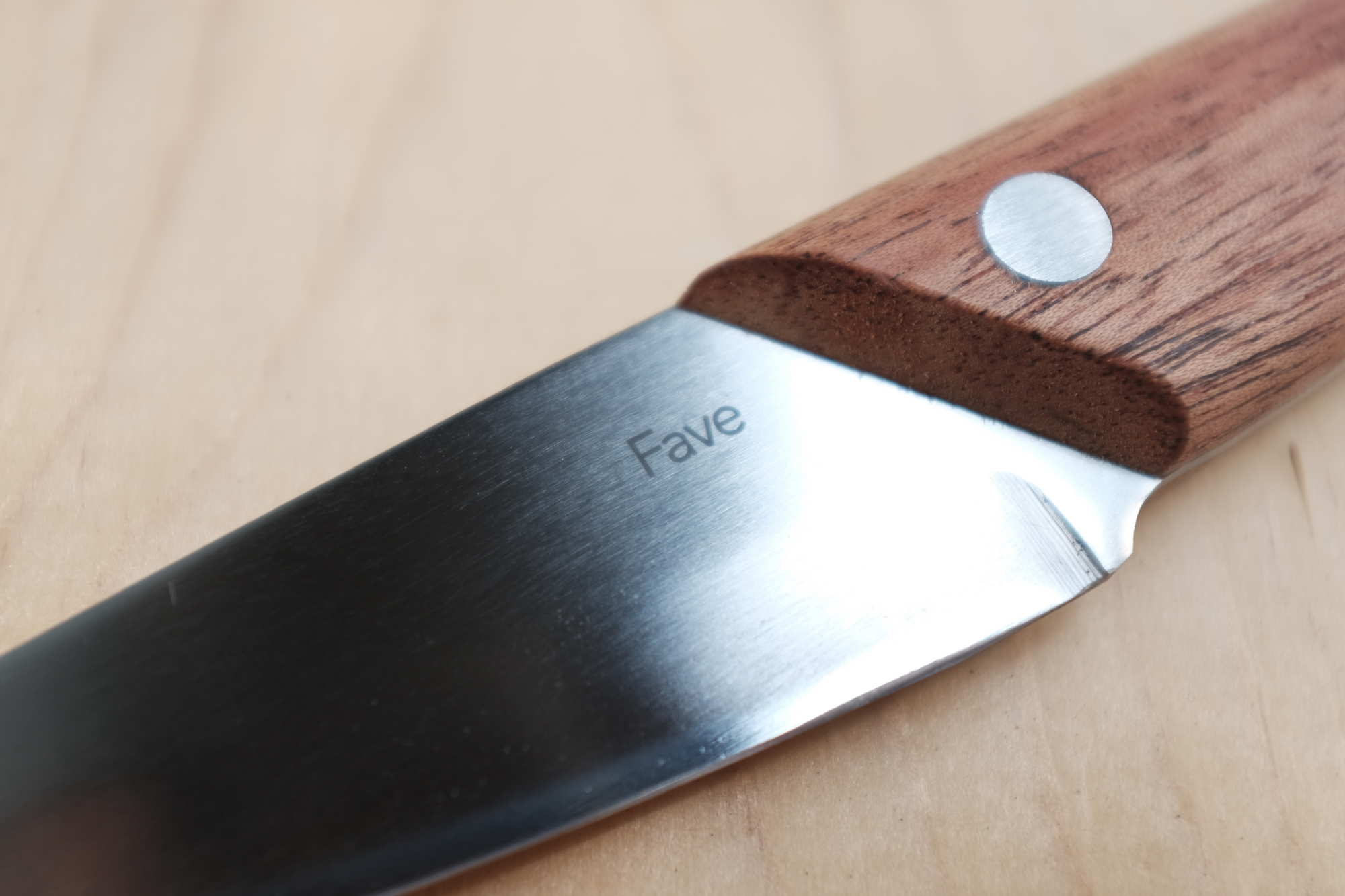 I put some Boos Block Oil on it, and that usually helps — but it didn’t seem to do much in this situation. What this tells me is that this handle isn’t going to hold up well long term, especially if used in wet weather, or for things that require the handle needing to be washed off. 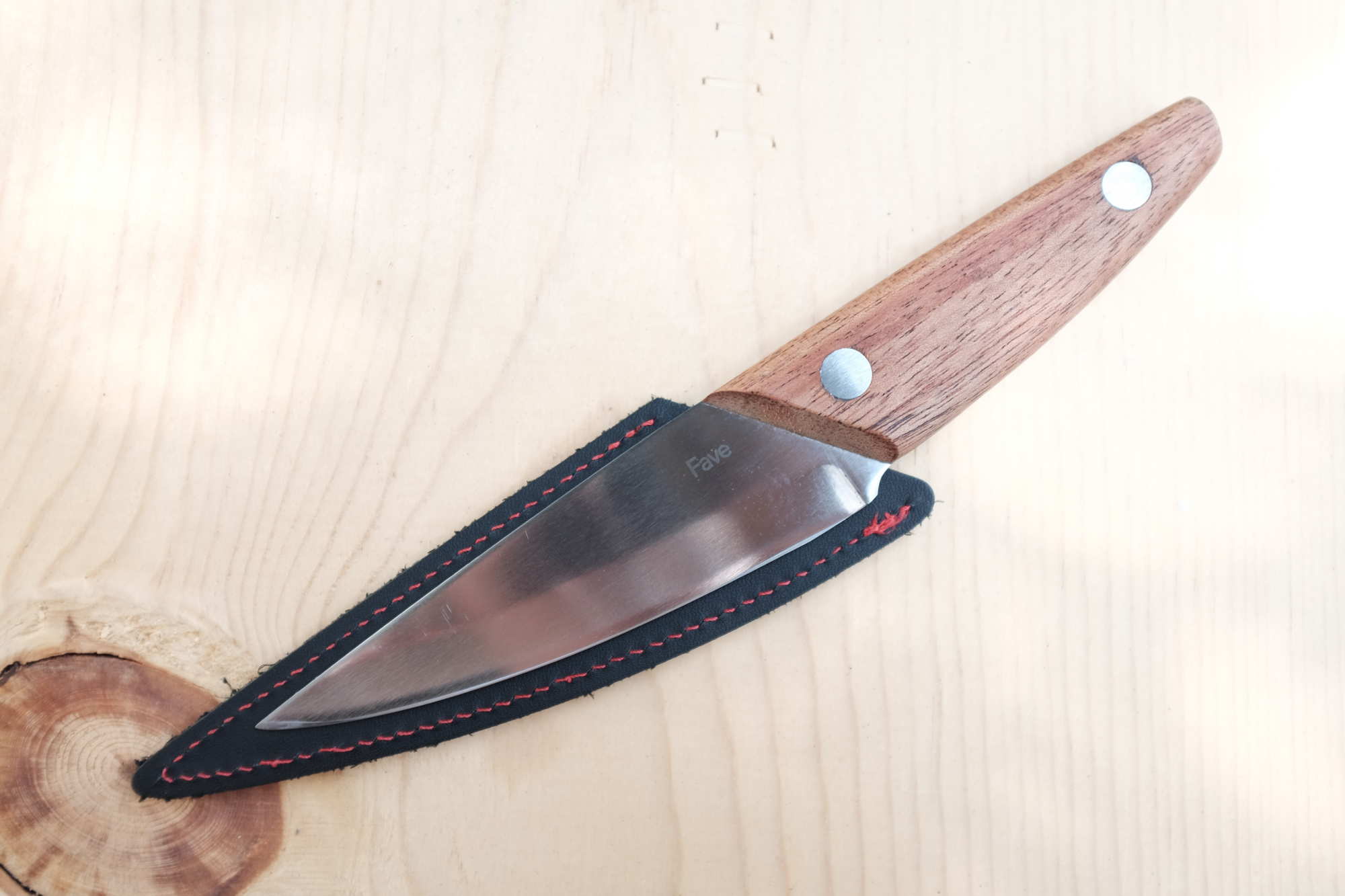 I can’t recommend this knife for anyone. It is pretty and well intended, but in the end the overall design of the knife, from the blade and handle shape perspective, make it a knife ill suited for most things — and frankly overpriced for what it is.