You think it sucks when you get on a flight and see little kids? Try being the parents.

You walk onto your flight, and the first thing you instinctually do is to scan the seats around you for kids. Little bastards can and will prolong the hell that is flying and you really don’t think it is fair if they are next to you. Yeah, we all do it — even parents.

This past summer I found myself on two separate trips, non-stop, from Seattle to Florida. Both times with my wife and kids. My kids are 3 years old, and 21 months old. I was terrified each time of what the flight may hold for us. Our youngest was a lap infant too, so she didn’t even get her own seat. (Because that makes sense for safety, FAA.) 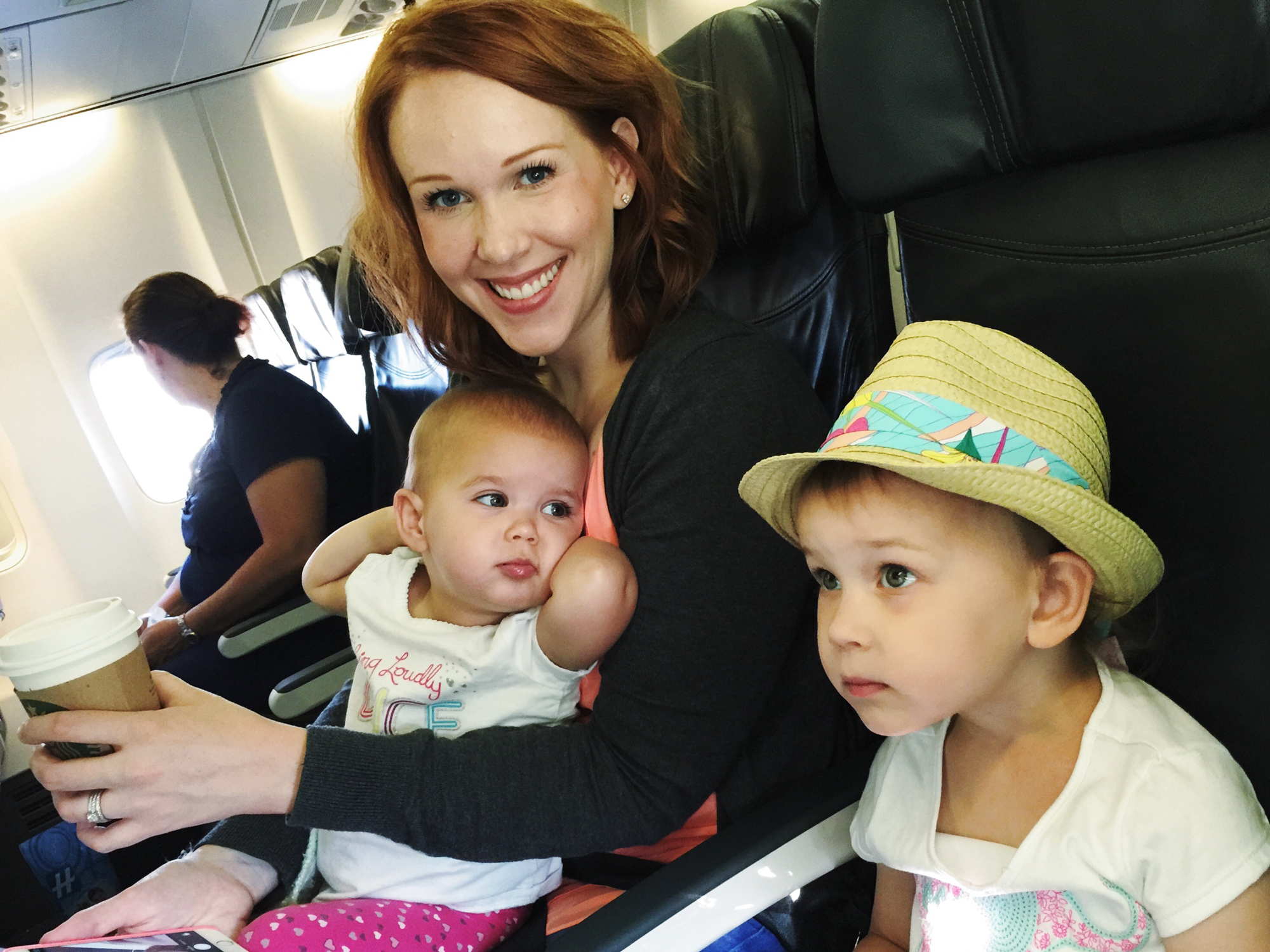 Flying with kids sucks more than it does if there is just one near you, or even next to you, on the plane. Because when they are your kids, you are in a constant battle of keeping them happy, keeping them quiet, and trying to be fucking comfortable.

Each flight we took was non-stop to try and limit the amount of time the kids would be cooped up. Two of the flights were practically all day: 8:30am to 5:30pm (local times), and the other two flights were 6:00pm to 9:00 pm (local times). So we’ve done the fly during the day routine, and we have done the fly at night so the kids can sleep routine.

I’d describe our experience as an overall success since the kids didn’t completely melt down, but I’d also describe it as incredibly uncomfortable.

So you now have a quiet and sleeping kid, whom you desperately want to keep asleep, so you don’t dare move a muscle. I had one sleeping on my chest, the other resting her head on my leg, and my body twisted 30° in the seat because — that’s how I got them to sleep.

That lasted for two hours and it was agonizing.

I joked with a friend and told him I had already taken Advil before I got on the plane, but that truly was not a joke — I think the preventative Advil was all that kept me lasting in the crazy positions. I’m not a doctor, but yeah, Advil.

The hardest part of each flight was keeping our kids fed. The flights always threw off their routines, and so they would never eat before we got on the plane. And it doesn’t really matter what the plane is serving for food, because your kids aren’t going to eat it — you don’t even want to eat it.

So you pack on a tremendous amount of food. I had half a GORUCK GR1 full of food with me. Think about that for a moment. I’m not even sure I go hiking for 2-3 days with that amount of food.

And that food — it’s going to end up all over you, the floor, and your kids. So pick it out wisely.

On our first flight I was woefully unprepared for how much food we needed, but I learned quickly. Never again will I go without a metric ton of food on hand. It also didn’t matter what the food was, they ate it very slowly and we got to smell it for a very long time — sorry other people on the plane — but they stayed quiet didn’t they? Our best bet was to grab a ton of snacks from home, and then buy something like a sandwich or burger/fries at the airport to carry on with us.

The food the plane serves is usually not something our kids would want to eat anyway. Plus it is usually served too hot for them to sit and stare out for 10 minutes. Also it usually will not come at any time remotely close to when the kids want to eat. In a nutshell: fuck airplane food. It’s not a good option for kids.

The planes also don’t have milk. Which is fun.

I am actually quite shocked that airlines don’t stock kids meals on flights, as it would be the best way to keep every kid on the plane quiet and happy. So the next time you are on a flight, and a kid is screaming, assume it is because that kid is hungry and the parent is out of snacks. And then instead of giving the parent that look — believe me they are stressed about the crying enough — send an email off to the airline chastising them for not having a couple snack boxes for kids on hand for fucks sake.

I’d even pay for a kids meal thing. Anything to keep them at bay.

I figured this would be a walk in the park. Our kids both love playing on their iPads, and they could play them the entire flight as long as they were quiet. In reality they played maybe a third of they flight with their iPads.

I have no clue why this is, because if you give them an iPad at home it is a battle to get it back from them. We even purchased kid headphones for them, but only our oldest would wear those, and even she would get fed up with them after a while. 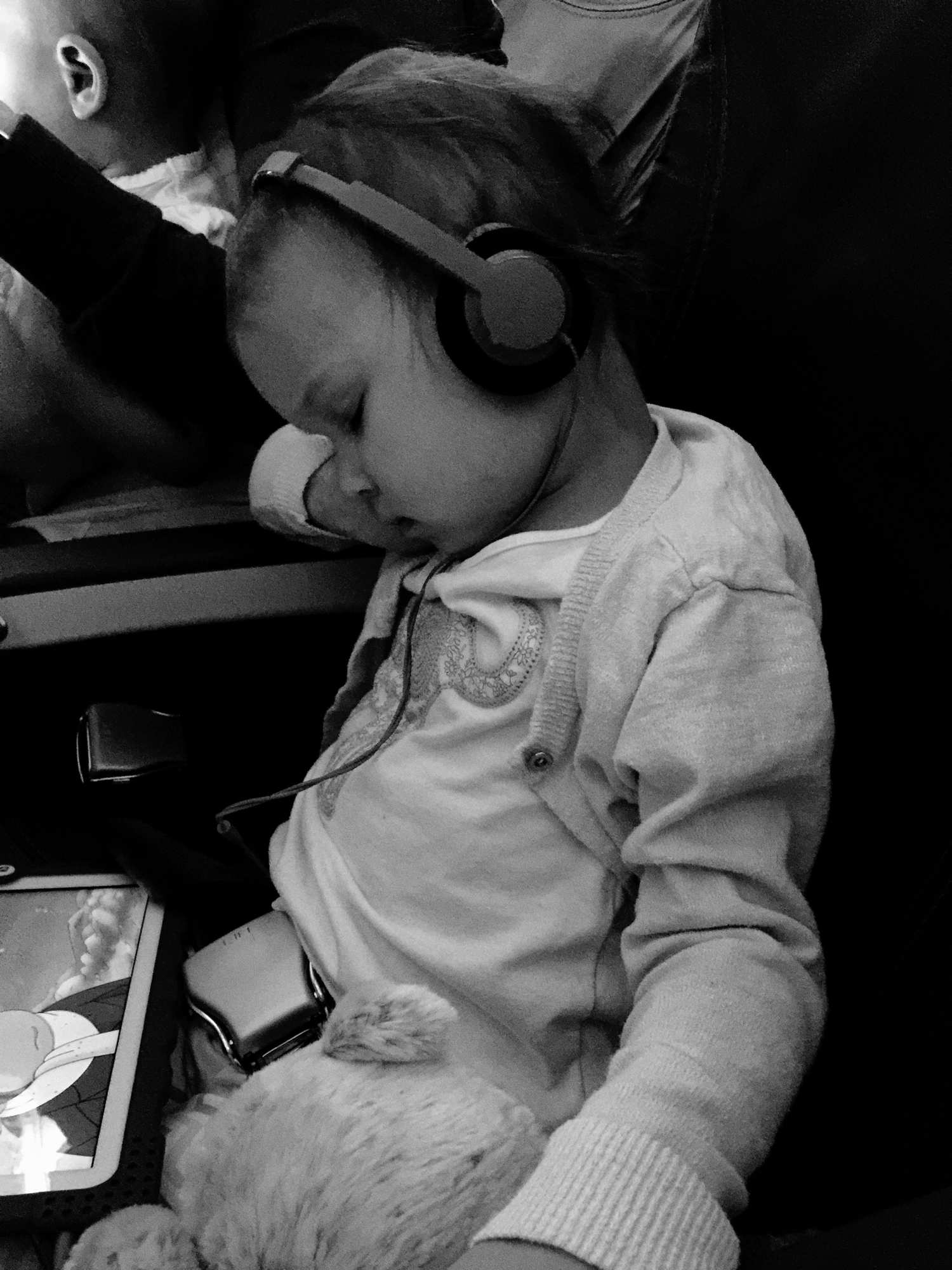 Eventually our oldest would relent and play her iPad for a few minutes before trying to doze off, or stare off into the distance.

A little boredom never hurt anyone.

The best way we found to entertain our youngest was with the window. Not looking out the window, mind you, but opening and closing the window shade. Yeah, that was fun…

Our youngest just could not find a comfortable spot on the plane no matter what she did. She was crammed on our laps and wanting her own seat. I can’t really blame her. If she had her own seat I think she would have been fine, but that’s an entirely different set of challenges (how do you split up a family of four when the aisles are groups of three).

I honestly have no advice how to keep kids entertained and only a warning: an iPad is not enough. Even with Frozen loaded up on it, with Frozen headphones — not enough I tell you. Not. Enough.

I have TSA pre-check, which allows me to take both the kids through the pre-check line with me. No crazy scanners or pat downs for them. Three of the four times through TSA went flawlessly. My oldest walked through the metal detector each time without incident, and my wife carried our youngest through.

Except on that fourth time. We had a TSA officer who simply didn’t know what the fuck was going on. Luckily there was a helpful TSA officer nearby.

It boiled down to this one TSA officer wanting our 20 month old to walk through the metal detector all by herself. Which is stupid. Yes, she can walk. But you are asking her to walk through something weird and towards someone strange. Not going to happen dude.

So she walked into the metal detector and started smacking the sides of it, which of course does not go over well. I was past the metal detector with the bags and our oldest kid, when I shouted at the TSA officer that she is 20 months old and there’s no way this is going to work.

There was a TSA officer near me who saw the look of “I am going to beat the shit out of that guy” that I had on my face and jumped in. Telling my wife to carry her through. And then they got selected for secondary screening, which the first officer was going to have someone pat down my 20 month old.

I didn’t have to say anything, because officer-my-best-friend looked at the guy and said “no, they are fine”. Then he turned to me and apologized and told us to be on our way.

Thank god for him.

Like I said, TSA was mostly fine, but I assume a lot of that is because I paid for pre-check (well worth it). Hopefully you never get the idiot who ‘helped’ us that day.

I Hate Flying With Kids

If you want to know what it is like to fly with kids here is how you picture it: you are in the middle seat of a row, with your carry on in your lap and it is constantly wiggling and you are not allowed to use your devices for more than 5-10 minutes at a time. That’s about 70% of the way to how it feels.

It is the worst.

But, amazingly, it is not nearly as bad as I fear it will be each time. I won’t say I look forward to it, but it wasn’t the end of the world either.

We will see how the next time goes, as our youngest will no longer be a lap child. Yikes. Just don’t forget the snacks and anything at all you think will entertain them.