After a year of iPad Pro usage, here’s some thoughts about using it as a desktop machine.

As I write this, it is a frigid Saturday morning, the type of morning where you just don’t want to think about going outside but you also kind of do want to go outside just to feel the piercing cold on your lungs. It has been over a year of full time iPad usage for me, and in that year I have had my iPad in a plethora of configurations. From the simple Smart Keyboard Cover to nearly duct taping it to the wall. What I have come to realize over this past year, is how portable and manageable the iPad as a desktop machine is. 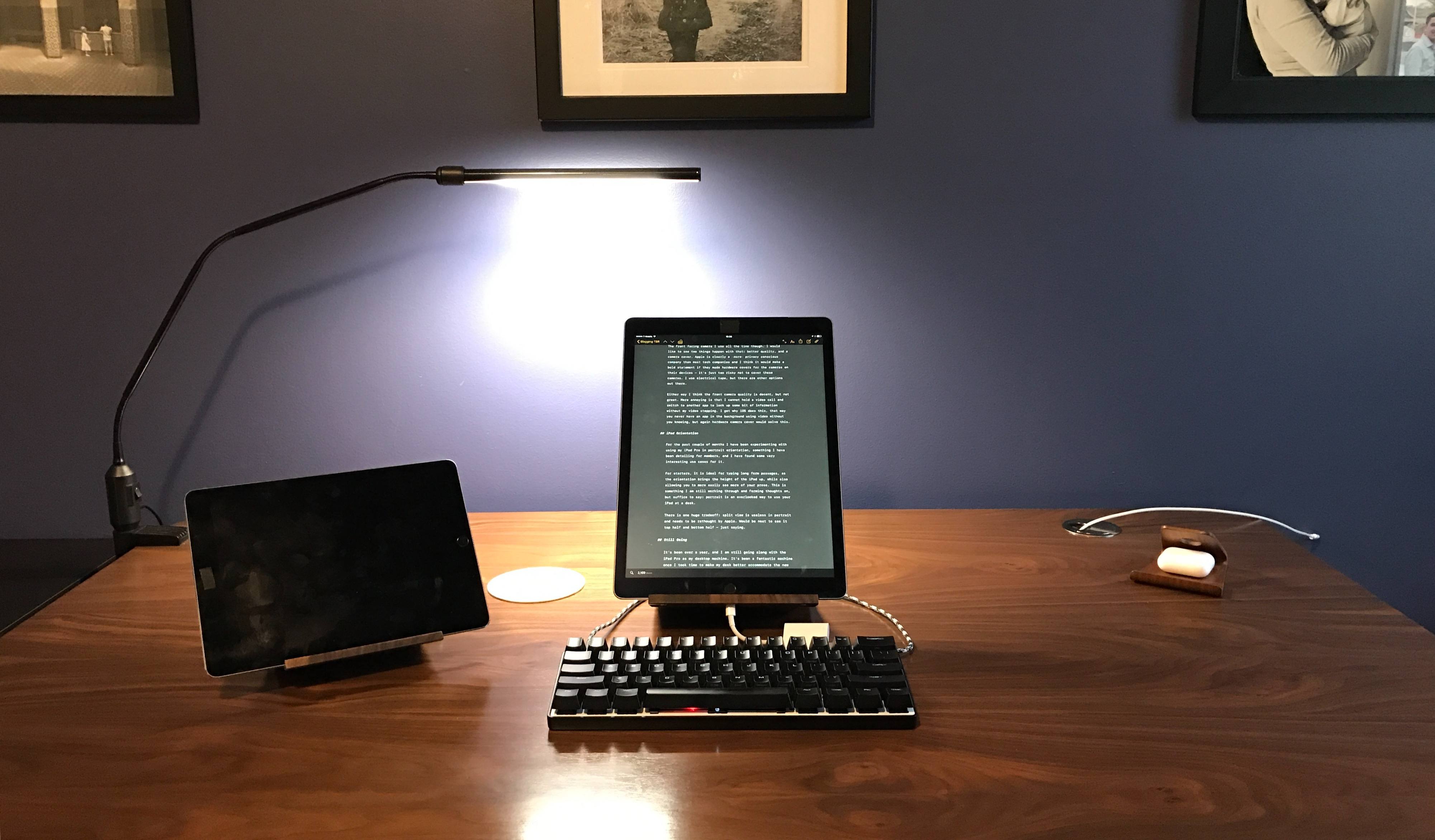 That is a tad odd to say, that a desktop can be so portable, but I am also writing this in the kitchen right now with a mechanical keyboard in tow, and none of it seemed overly cumbersome to move out of my office. When I am done with this writing session I will lift the iPad out of the stand it is sitting in and move over to a comfy chair. There will be nothing to unplug, and what was my makeshift desk this morning, will go back to a kitchen table. Not unlike it would for any laptop user, except my iPad is a chameleon of work conditions. Adapting to me, not causing me to find a comfortable arm of the couch to rest the laptop on.

I mention all of this because I suspect a lot of people have a hard time working at an iPad Pro for extended periods of time, because they never take the time to setup up their desks in a way to accommodate using the iPad. It can be hard to spend a hundred dollars on a stand, except when you consider you are often replacing a $2,000 setup with a $1,100 setup, so you have budget room to buy some niceties for yourself. With this in mind, here is a smattering of thoughts I have about using the iPad Pro as a desktop machine.

I wrote about how the Compass 1 is a superior stand to the Compass 2. But I’ve also been testing review units of the Yohann wood stands — which are fantastic. But I want to make another point: there are very few stands for iPad Pros.

What I mean is that most stands seem to assume you want your iPad to sit like a laptop — when what you might want is for it to be on a nice articulating arm. Or perhaps you still want a Surface style kickstand (I mean how has this not been made yet?).

You would think there is a rich market for this stuff, but it appears that no one is bothering with it. To say this bums me out is an understatement. My top suggestion is to start with the Compass 1 stand as it is fantastic and inexpensive. Second to that, of the stands I have tested, the Yohann is the best of the stands. They look like they wouldn’t work well at first glance, but in reality they are among the nicest stands I have ever used.

No matter what you do, you will likely end up needing to lift your iPad higher for longer sessions and for that I actually recommend finding a nice box to set everything on. I know, it sounds crazy but that is actually the best solution I have found. I am working on making my own stand out of wood, but that is a post for another day, and well — I still have to make the damned thing.

I spent most of the year using my Smart Keyboard cover, but about a 2 months ago I had two things happen:

Both of those led me down the path to find a good mechanical keyabord for the iPad. I settled on the Pok3r from Vortex. I think it is awesome, but I also bought a used MiniVan for an even smaller option when I travel. I am still figuring out that MiniVan, but the Pok3r is already something I miss when I work away from my desk.

I made fun of buddies for a long time who were all about mechanical keyboards before finding one I loved. Since then, everytime I come back to a mechanical keyabord I realize why I love them so much. Yes, I could get the Razer thing, but I don’t want a case on my iPad — I want a stellar keyboard. To me a case is a compromise, and the Razer is a comprise of a keyboard. I’d rather use the Smart Keyboard than the Razer as I see the Razer as compromising on both size, portability, functionality, and typing. The Smart Keyboard cover only compromises on typing.

I think using the iPad Pro higher up on your desk with a fine mechanical keyboard like the Pok3r is about as close to writing nirvana as you can get. It’s been my setup for well over a month now and I like it so much I’ll keep refining it for months to come.

Over the past year I have really taxed my iPad Pros, but one thing remains true: needing to charge mid-day is a rarity. Yes, video calls really wear down my battery, and yes my iPad Pros cannot make it all day. However, my 12.9″ iPad Pro usually can end the work day with around 5-10% battery left — with most of the wear being from video calls.

I also tend to kill my 9.7″ iPad Pro battery about the time I go to bed, but I often am playing music, TV Shows, and video games (in the evening) on it and all of that takes an extra toll on the battery.

This is a big change from my Mac using days. I used to always charge my Mac when I was at my desk, now I just make sure to charge my three iOS devices when I go to bed, and from there I don’t worry about the battery life. It’s a very rare occurrence for an iPad battery to die and leave me in the lurch.

I mentioned how this has caused me to not only never carry a charger when I go to work from somewhere like Starbucks, but I also no longer carry a battery back up on my trips. They just aren’t needed — charge at night, work all day.

If I only had one iPad Pro (as I did for a little over half a year) then I tended to need to top off the battery in the evening to get a full day use — I did this during dinner/bath/bed time routines with the kids — and it was never an issue.

This is the biggest and most often asked question I receive from people: “aren’t the ergonomics of working on an iPad terrible”. My answer has always been along the lines of: yes, but it’s no different than working on a laptop, maybe slightly better since you can hold it up when you read. I also commented that I was prone to neck issues with dedicated laptop usage, but hadn’t noticed anything with my iPad usage.

That is, until I hurt my neck — then shit got real.

I have since began propping my iPad up higher on my desk for the majority of my work day, leveraging the dual iPad setup to use the smaller one for tasks where I need to use more than the keyboard. This has helped greatly with the healing of my neck.

I believe the best response to this is: like any computing setup, you need to adjust your environment to accommodate the new computing system. New stands, new arrangements, and other things to protect your body.

I will note that there is not nearly as many resources and stands to help with this. Like with any computing setup, nothing is ever ideal.

I’m not really sure how to go about this, I have hundreds of apps on my iPad, so instead I’ll just list out a bunch that I use a lot:

I bring these apps up not because they are the absolute list of what I use, but rather they are tools which I could not use the iPad full time without. The thing about these apps is that as with any other set of tools, there are many great ones apps out there to help with almost any line of work.

When I posted the Pok3r review, many of you commented on how gross my iPad screen looked. That’s just how it always looks. I can clean it, but then I look at it and it’s that dirty again. For whatever reason, the iPad Pro screens collect fingerprints at an exponential rate. They also have a lot of glare on them.

As you can tell, I’ve clearly given up on trying to keep the screens clean. I have, however, rearranged my office a bit to make sure that the lights and windows don’t cast glare on the screen. I really do hope Apple updates the devices with screens less prone to glare — as this can be a real problem. (Also better coating to resist fingerprints would be welcomed.) So beware, if you have a desk under a lot of overhead lighting, you might need to move the desk.

I really would be fine with iPads not having a rear camera, especially if it meant no camera bump. I still think it is stupid to take photos with it, and I’ve only ever used the camera for “scanning” things into Scanbot.

The front facing camera I use all the time though. I would like to see two things happen with that: better quality, and a camera cover. Apple is clearly a more privacy conscious company than most tech companies and I think it would make a bold statement if they made hardware covers for the cameras on their devices — it’s just too risky not to cover these cameras. I use electrical tape, but there are other options out there.

Either way I think the front camera quality is decent, but not great. More annoying is that I cannot hold a video call and switch to another app to look up some bit of information without my video stopping. I get why iOS does this, that way you never have an app in the background using video without you knowing, but again hardware camera cover would solve this.

For the past couple of months I have been experimenting with using my iPad Pro in portrait orientation, something I have been detailing for members, and I have found some very interesting use cases for it.

For starters, it is ideal for typing long form passages, as the orientation brings the height of the iPad up, while also allowing you to more easily see more of your prose. This is something I am still working through and forming thoughts on, but suffice to say: portrait is an overlooked way to use your iPad at a desk.

There is one huge tradeoff: split view is useless in portrait and needs to be rethought by Apple. Would be neat to see it top half and bottom half — just saying.

It’s been over a year, and I am still going along with the iPad Pro as my desktop machine. It’s been a fantastic machine once I took time to make my desk better accommodate the new ways I work.

The iPad Pro as a desktop machine, is a fantastic decision.