Is that a flashlight in your pocket?

Finding a flashlight which my life can depend on is a lot easier than this part: finding something to carry everyday everywhere. A robust, solid flashlight, is easier because size doesn’t matter — all that matters is that it always works and works well.

With an EDC light, there are a lot more factors:

You also have to value appearance here, because it’s something you are going to be using a lot and you want it to not look dorky (for lack of a better word). I mean, it will, because you are the person with a flashlight, but still.

If you search around for EDC flashlights you are likely to be shocked by how big some of them are — I personally don’t understand how people carry some of these. For me a good EDC light should fit comfortably in my pocket, not clipped to my pocket, but in it. It also needs to be around 100 lumens or so, and offer a basic low and high mode.

Surprisingly, this encompasses a lot of flashlights. Deep breath here’s what I have been testing:

They all have stupid names, so let’s move on. 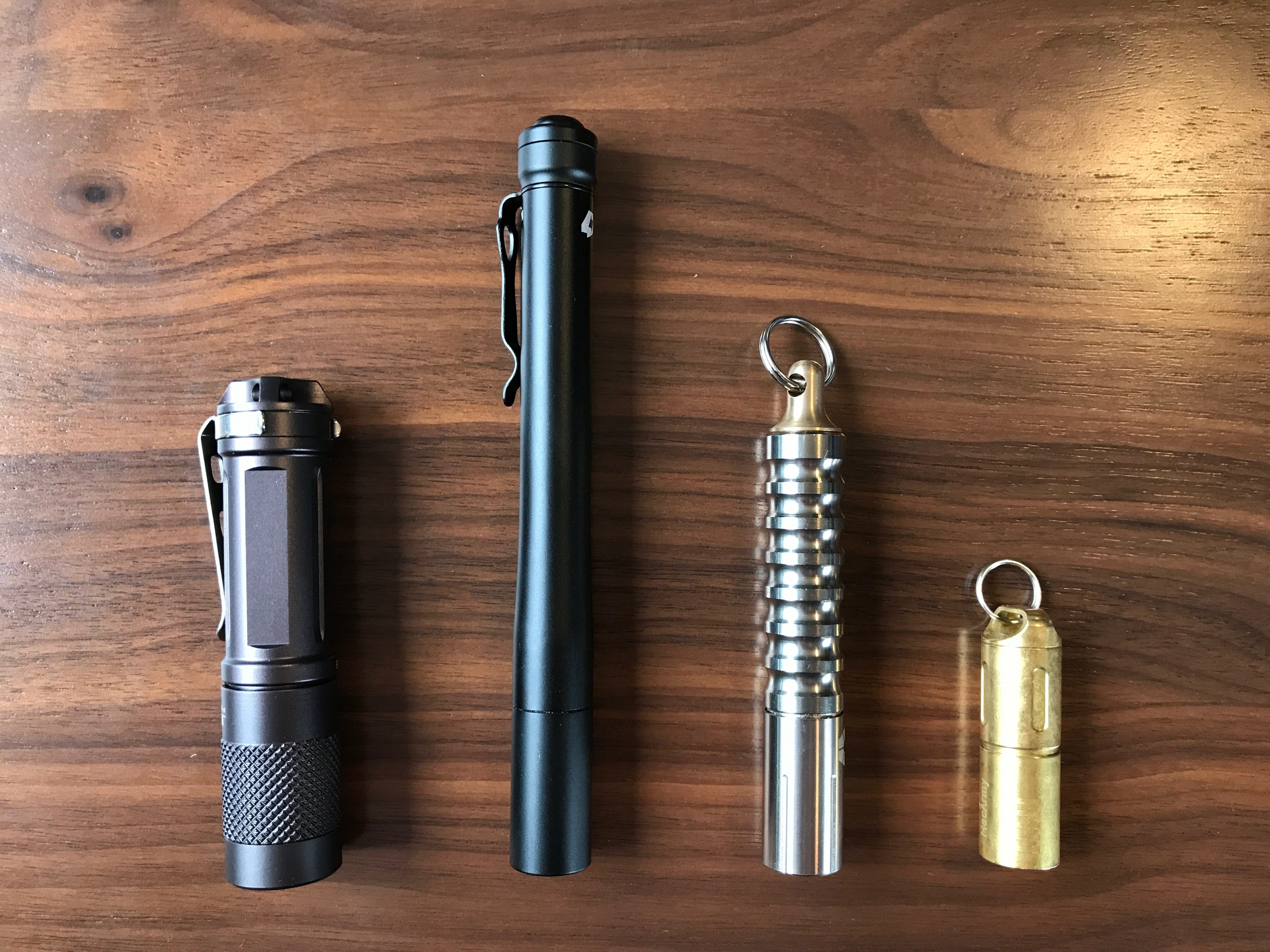 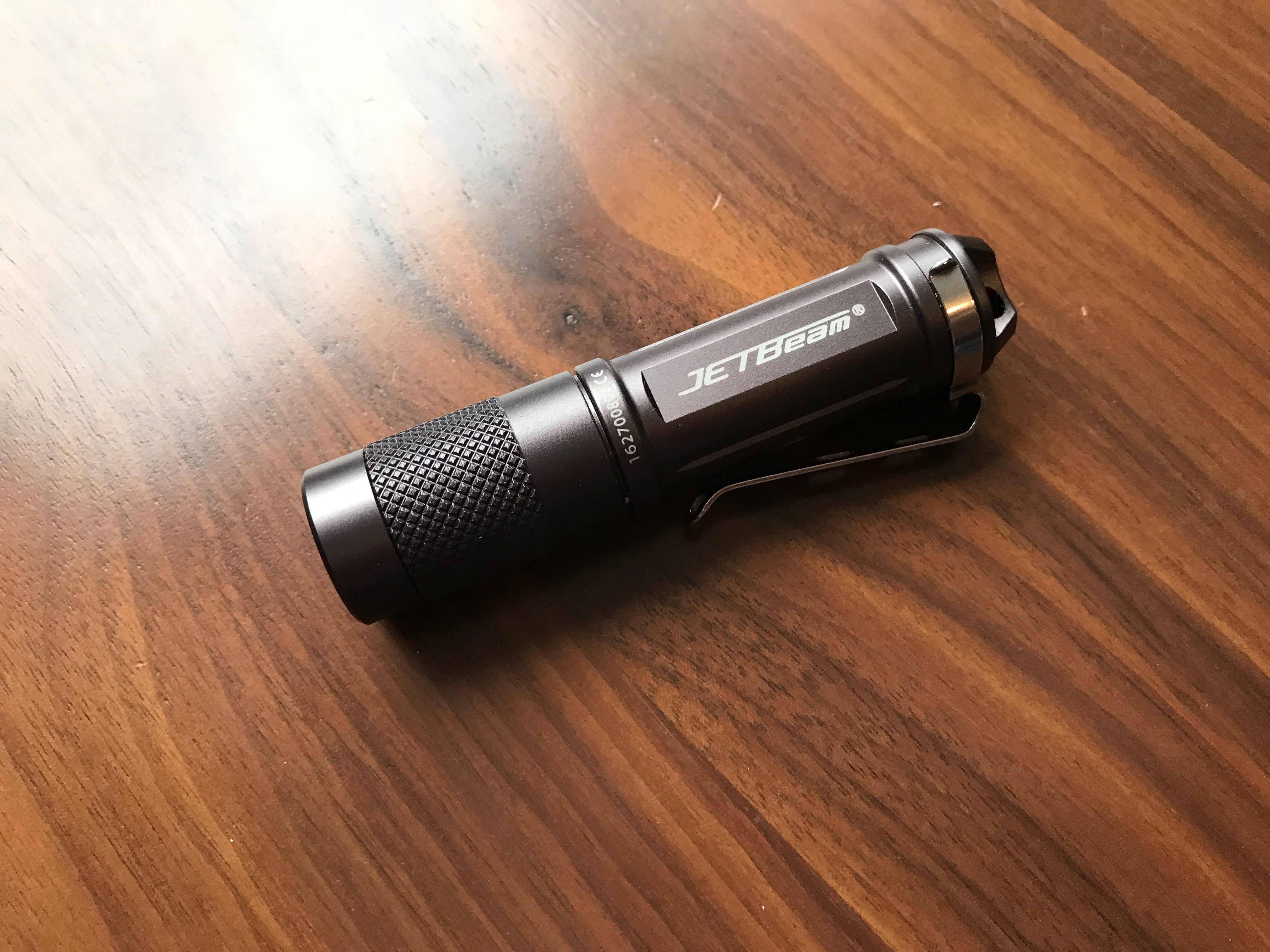 At around $20, the JetBeam is one hell of a good deal. It puts out around 480 lumens with a three stage memory UI. Let’s move around all that crap though and talk about the size.

It’s powered off a single AA battery, so that’s the size of the light, plus the LED head. It’s around 3 inches or so. The light comes with a pocket clip, but that’s removeable. You control the light by twisting it on and off, and turning it on and off within a second or so will toggle to a different output setting on the light. What’s really nice though is the light will “remember” your last brightness for the next time you turn it on — a favorite feature of mine.

Overall the deal breaker with this light is the size. While it remains smaller than my EDC pocket knife, it’s just too much to add to my pockets. I do really like this light though, and I own two of them. One is in the bug out bag I made for my wife, and the other is used around my house all the time. Fantastic little light, just a touch too large. 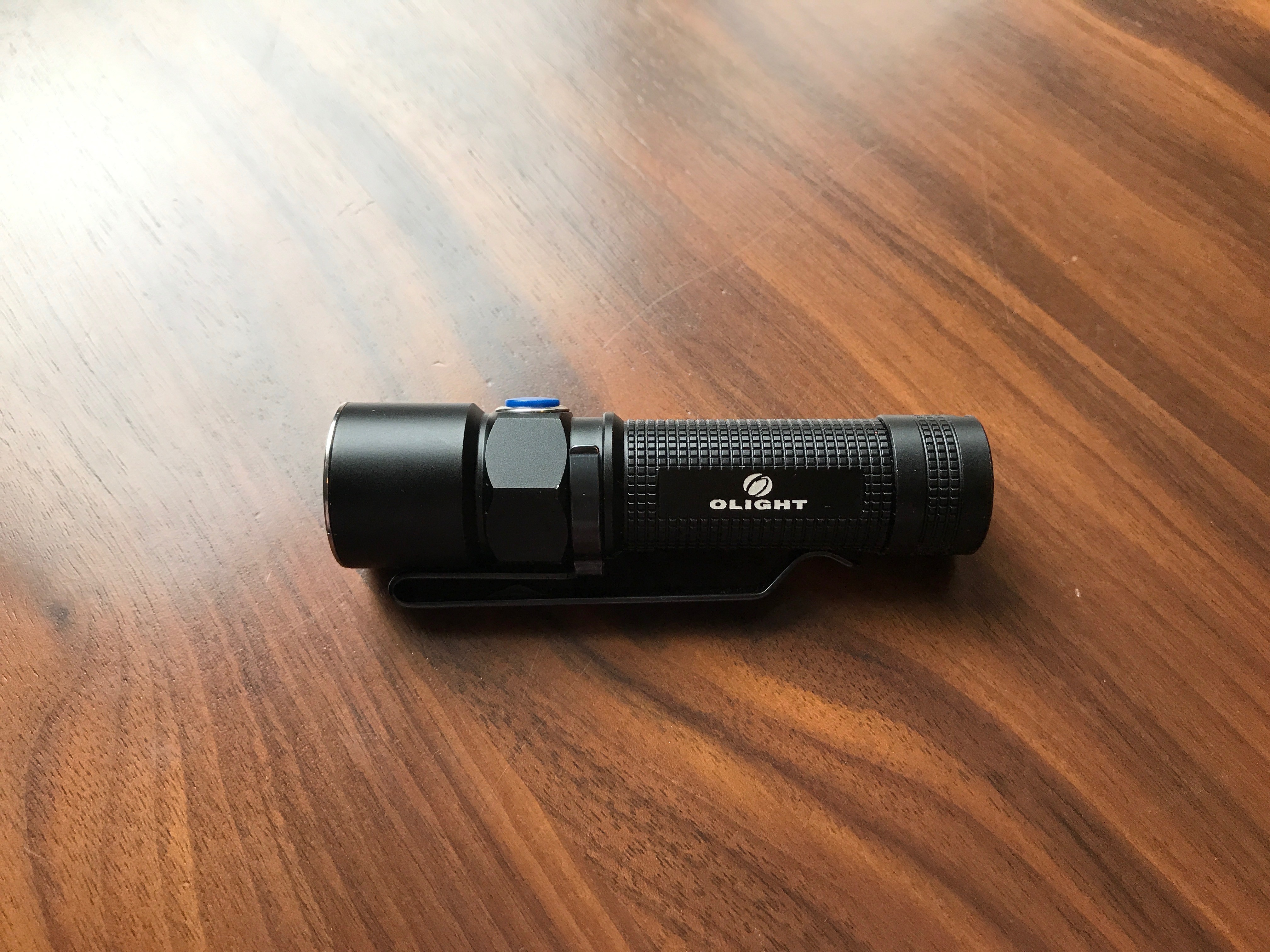 Olight simply makes some amazing lights, and as far as I can tell, you cannot buy the S15 model any longer, but the S10 is a very close substitute. This is another AA light, so the height is almost identical to the JetBeam, but the light is bigger and larger in diameter too. This light is controlled by a single button on the side, but still offers 5 modes in total (four differently powered modes, and a strobe mode). The light also offers a full lock out, so that you don’t accidentally bump the switch and turn it on.

Like the JetBeam this is IPX8 waterproof, but has improved impact resistance at 2 meters. Unlike the JetBeam which is 480 lumens, this light offers only 280 (likely because it is older).

The Olight has some really great features though among those stand outs being:

All joking aside, this is an amazing light. It costs substantially more than the JetBeam, but if you want to feel what a good light is like, I’d easily recommend it over the JetBeam. For me this is what stays in my EDC pouch and goes on day hikes, I trust this light a lot. (For overnight hikes I pack a Surefire from the last post.) 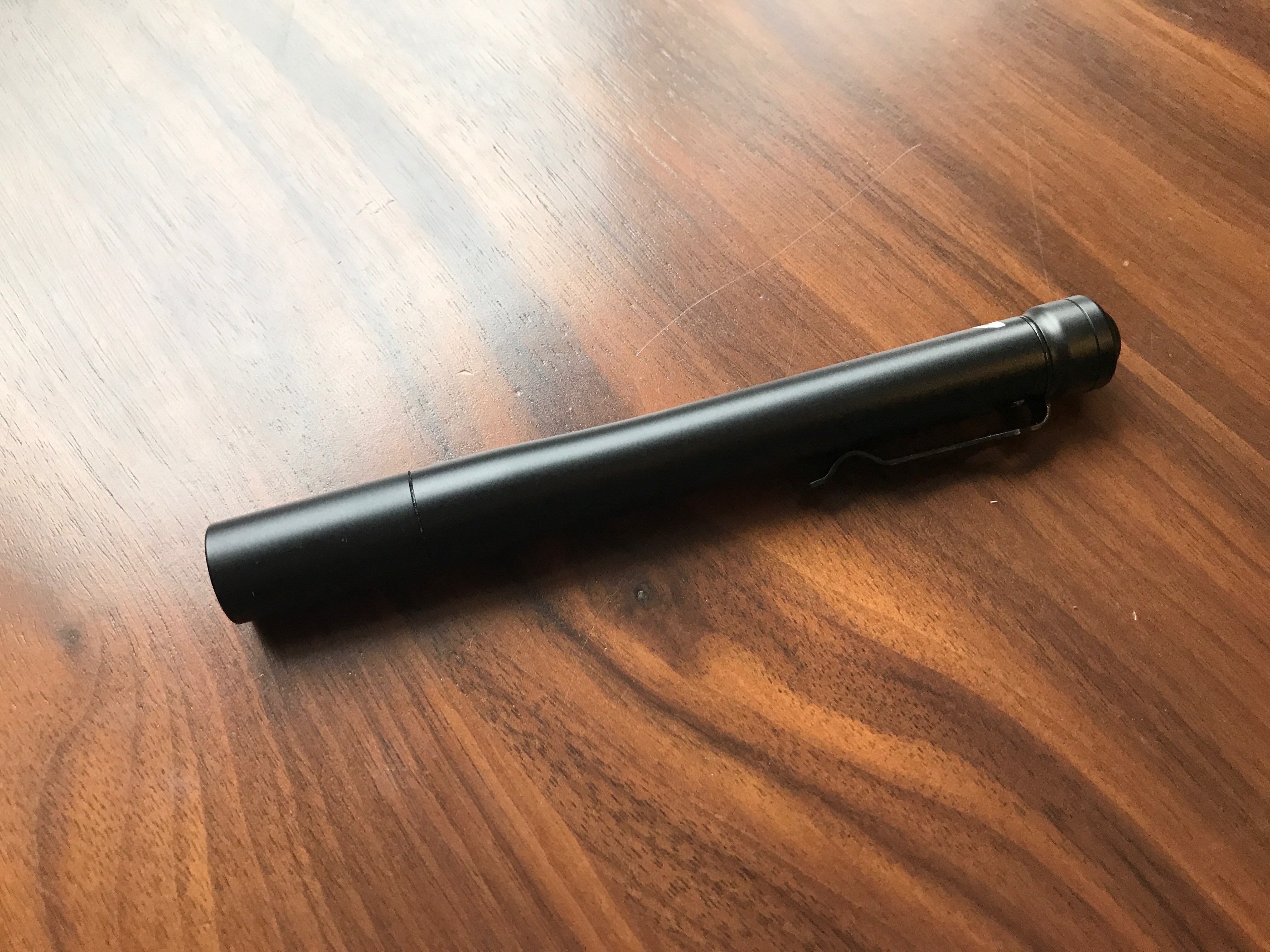 My Preon is a much older model than the current, but the form factor, function, and size are pretty close. The output is the major change. This is a pen style light, and as you can see it is long and skinny. It will not, however, fit in most pen slots in bags — it needs to be an oversized slot. If a sharpie fits with room to spare, then this will fit. This light as been with me a long time and something I used to take everywhere as it stayed in my bag.

This is as simple as you get, with a tail click switch: one click for low, one for high. It has some specialized strobe modes as well, if you do some half clicking jujitsu.

This light is obviously too large and thus I don’t use it. I do include it though because when I rarely went anywhere without a bag (commuting) this was a near perfect light for me as it easily fit in my bags with my pens. These days the light doesn’t see much use, but there are a lot of people who prefer a light in this form factor and I think this is a solid option — but the price is out of line for what is offered. 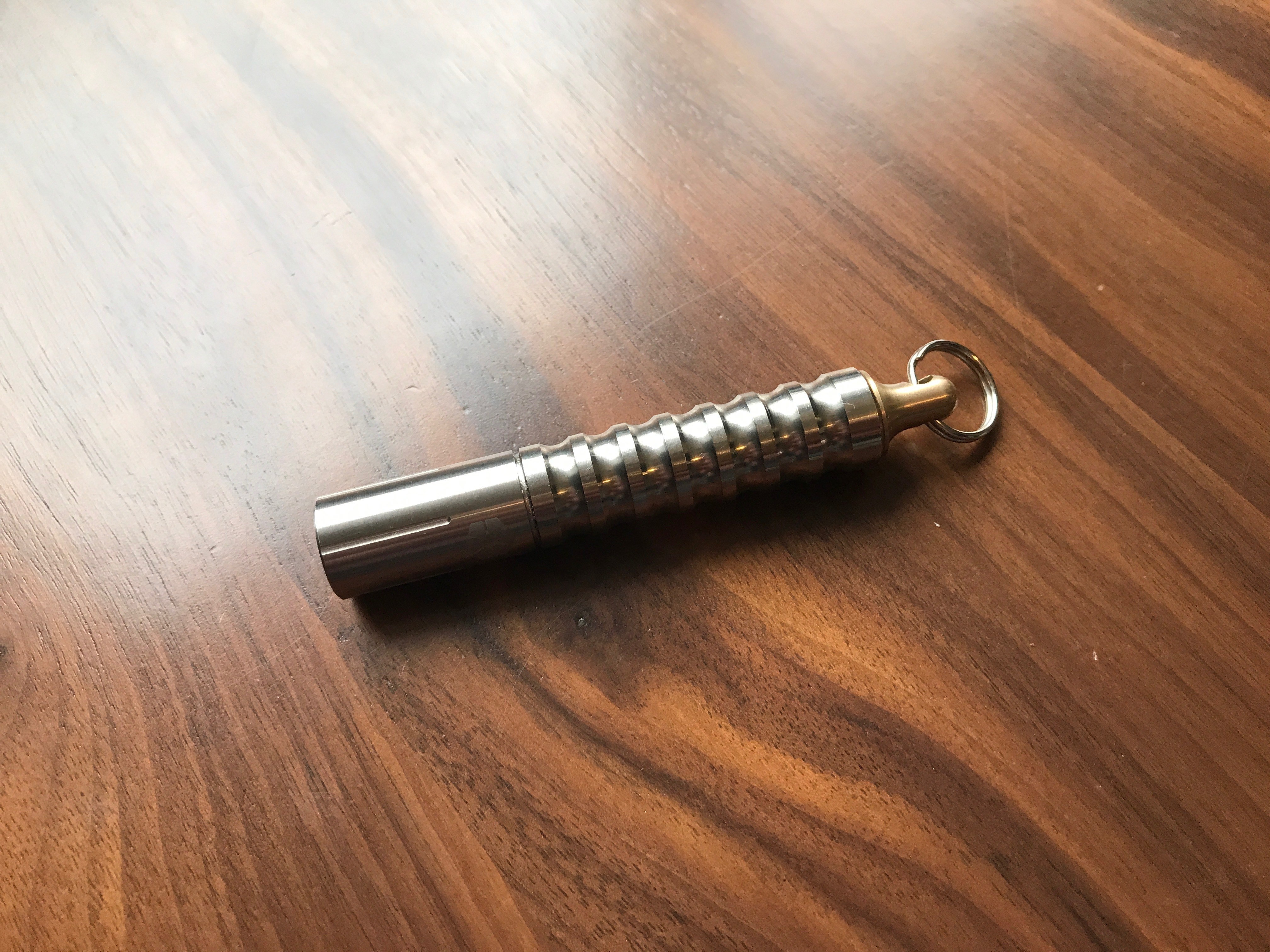 This is one of my favorite lights that I own, and I have a model with a Nickel finish. Prometheus has an amazing web URL as well, “darksucks.com” which could not be more perfect for a flashlight company. Here’s the thing about this light though, it’s a two stage twist on light but the highest output is only 60 lumens (this is another model which pushes that up a little higher).

This light is a AAA light and thus is very small. It comes with a spring controlled quick release so you could put it on your keyring and pull it off. This requires 10lbs of force and thus your light is likely to never fall off on its own. The light is twist on, twist off, and repeat that again to get access to the higher output.

When I mentioned above that your light needs to look cool, this light is what I had in mind. This light is just awesome looking.

At this point you are probably wondering why one of my favorite lights is also one of the lowest powered lights. Well, Prometheus feels strongly about this, because they chose Nichia LEDs instead of the CREE LEDs in every other flashlight I talk about. What’s special about Nichia is that they focus on CRI — specifically the ability for the light to accurately reproduce color. Long story short: when you shine the Beta-QR on something you will see an accurate color on that something. With CREE LEDs that’s not necessarily the case.

Here’s what Prometheus says: “A High Color Rendering Index (High CRI) LED is designed specifically to work in concert with the human visual system, providing the maximum possible color accuracy when compared to sunlight. For example, daylight scores a perfect 100. The Nichia 219 used in the Beta-QR is typically 90+ CRI. It’s currently the highest CRI per lumen in the industry…and the light quality is stunning.”

It’s noticeable to say the least.

The downfall of this light is the same as every other one on this list: too big. That’s the thing, even at this small of a size, how do you keep it, keys, and a knife in your pocket? Assuming you don’t want a metal light rubbing against your iPhone in the other pocket. Many people will find this light plenty small, but for me it’s my bag light. It stays in whatever bag I am carrying at the time — because it is just too much to be in my pocket with everything else.

That said, this light is awesome. My only complaint is that it should have a very low mode. 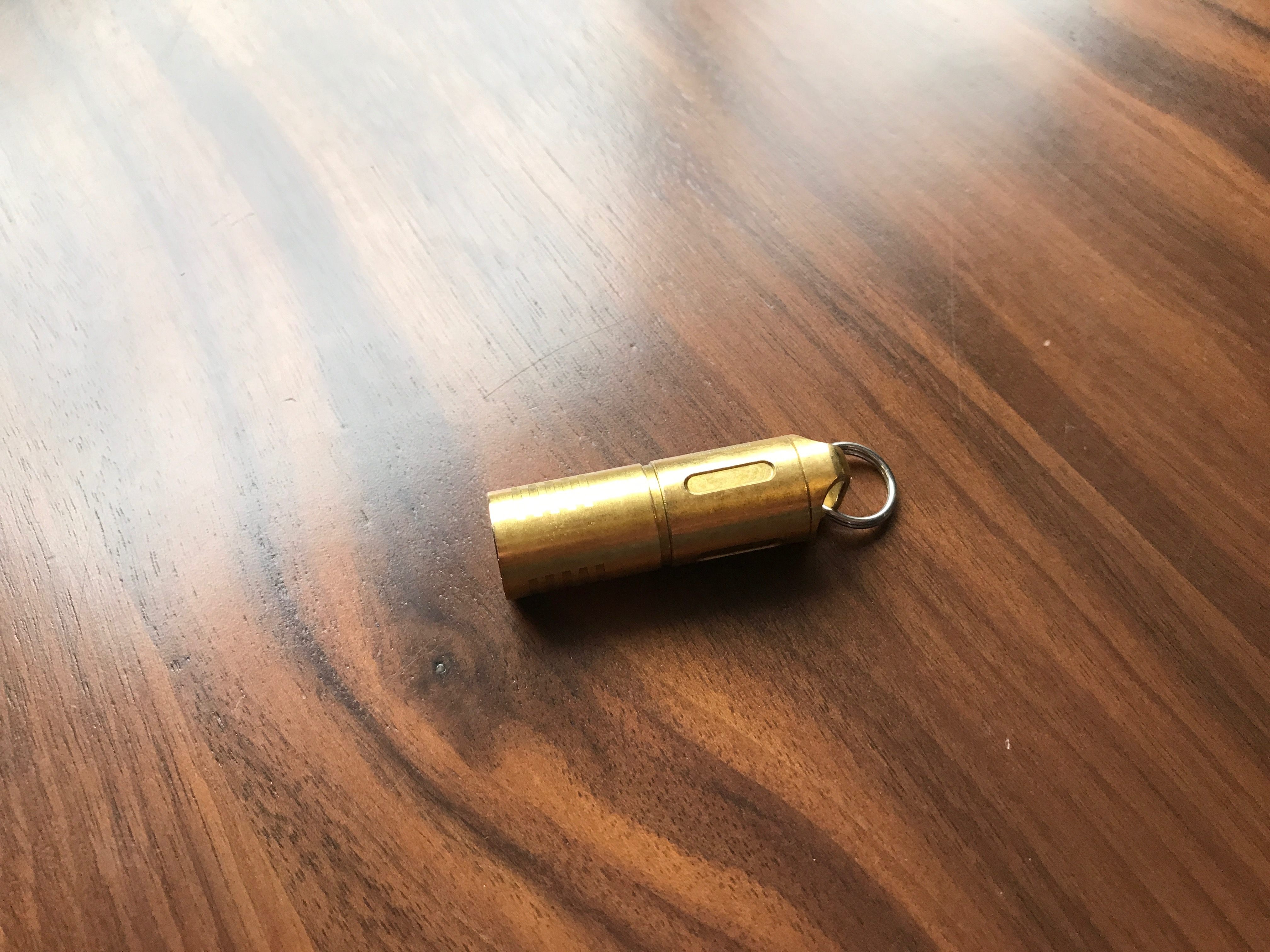 But, umm, this light is awesomer. We’ve been moving towards this light steadily, talking about smaller and smaller lights. This light is absurdly small — I actually didn’t believe it would work. Here’s a picture of it next to a standard house key: 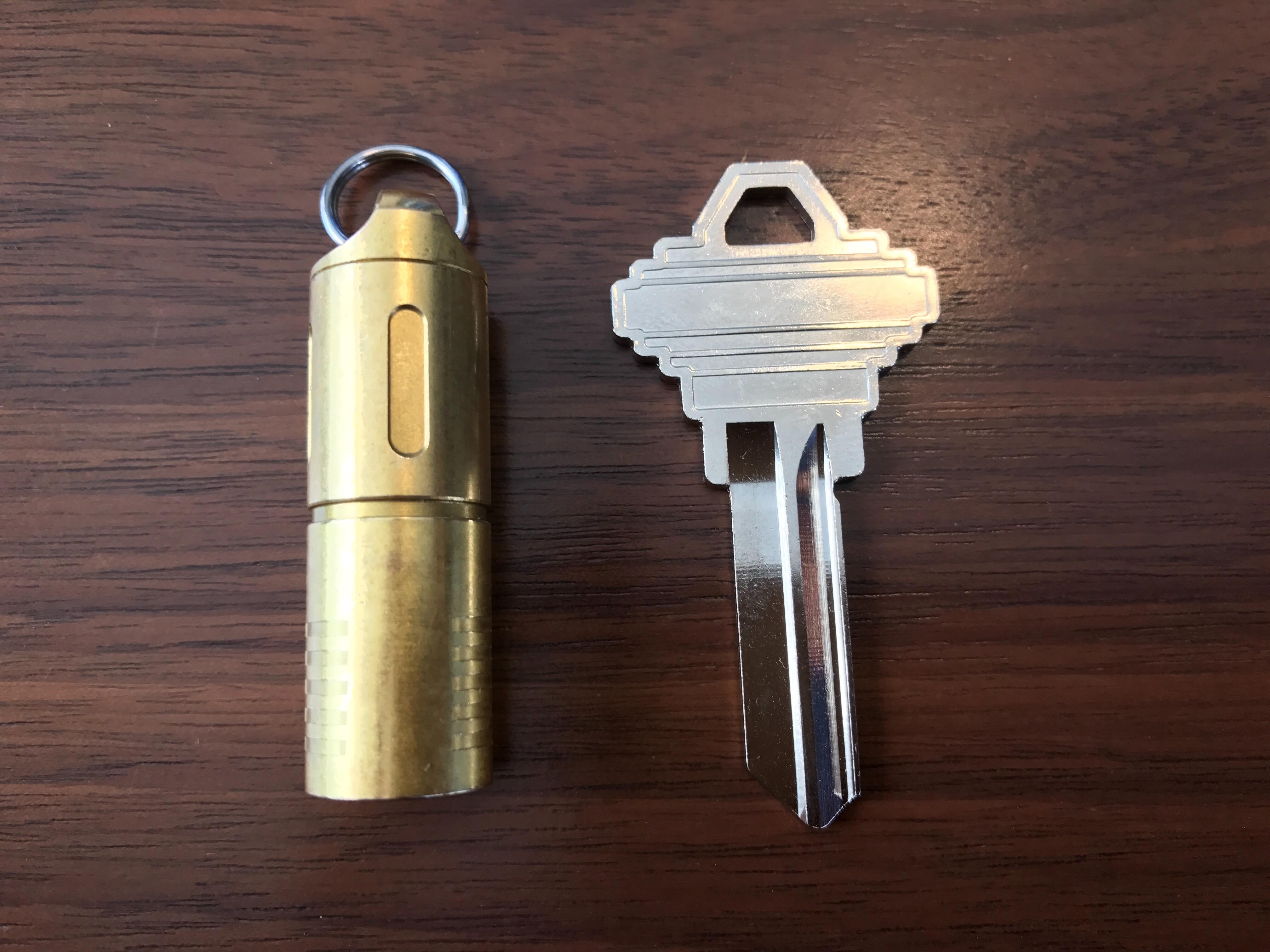 Yeah, really small, right? Insane. The model you see there is the brass model, and good lord this light is great. It’s 130 lumens, but has a low mode at 8 lumens. It offers a rechargeable battery, which lasts for 6 hours on low. It weighs nothing and takes up no space. It looks pretty neat too, and it feels fantastic.

My only complaint is with how you control the light. It’s a twist on/off, but it’s a two stage twist. That means that if you twist the head all the way down, it’s brightest, but partially down is when you get low mode. In practice this can be very frustrating to always nail the low mode.

That’s my only complaint. You are really paying for size, but at 130 lumens, this is a bright little light. This is one of those lights where you do a double take: how is that little thing putting out that much light.

In fact I did something I never thought I would do: I attached it to my house keys. Now it goes everywhere with me when I leave the house. And I absolutely love this little light. The “4” model can be had for less money, but it’s not as good looking as the “3”. (Huckberry typically has the “3” for sale.)

When I started this search, I did not think I would find a light I would be happy with. But in the MecArmy I have found the perfect EDC light for me. For others this light won’t be right, but I think it is outstanding — it would only be better if it had a different UI and the Nichia LED in it.

While I carry the MecArmy on my keys, around the house I shuffle between the JetBeam and the Beta QR — both solid lights. It’s also amazing how handy it is to have a flashlight around the house at night.

Up next, at some point, “flashy” flashlights — sorry…