The todo app for real people.

For the majority of the life of this site, I’ve been a staunch OmniFocus user. Detailed and meticulously maintained systems for doing. I didn’t have, nor did I want, a list — I wanted platform from which I launched my projects.

That’s a fancy way of saying I scheduled time — I made tasks — for managing all my other time and my other tasks.

Over the last few years I’ve sought to simplify my systems, not because something was broken, but because something simply felt “off”. I moved from a Mac to iOS, and yet my task manager was heavy, and not light — it wasn’t of the same philosophy that my iPad was. I tried and liked 2Do, but moved to Todoist for many reasons I told myself would make things better. Each time, I was gaining simplicity in some form, but not reaching that intangible thing I couldn’t verbalize, but wanted.

When Things 3 dropped, I went all in. It was, it is, near perfect. It had that intangible factor and I knew it did because I had long ago sworn off using Things, and version 3 had me eating my own words. I’ve been putting Things through its paces, trying to figure out how to verbalize what I like about it.

Simplicity? Minimal? Hidden power? Those all felt like they were striving towards the right answer, and they feel true on the surface, but dig deeper and that’s not true.

All the power of Things resides at the surface. It’s not hidden in the way as it would be in OmniFocus or 2Do. Minimal? Hardly, people misuse that word too much for me to fall prey to that trap. Simple? Perhaps in design, but I would go no further than that.

There’s something about the usability of Things which leads you to a state of happy-contented-ease. The app moves you from one thing to the next in the most elegant manner possible.

When the topic of a humanities education for software developers came up, it struck a chord. There’s such a thing as too much logic in an app’s implementation, and it’s that fact which was bothering about all those other apps. They lacked a soft touch. They lack personality, calm, and care — all stifled by logic.

That’s not to say they are not good, at times of great crisis it is logic that we should turn to. However, most of my task management isn’t in crisis, it’s in providing me with the calm that there’s a place where it is all recorded.

I can tell you all about the features Things has, and what it’s missing (like fucking keyboard shortcuts on iOS), but none of that matters, because none of that is the reason why you should use Things.

There is, in fact, only one feature I need to point out to show you the humanity of Things. When you go to set a due date, you get this view: 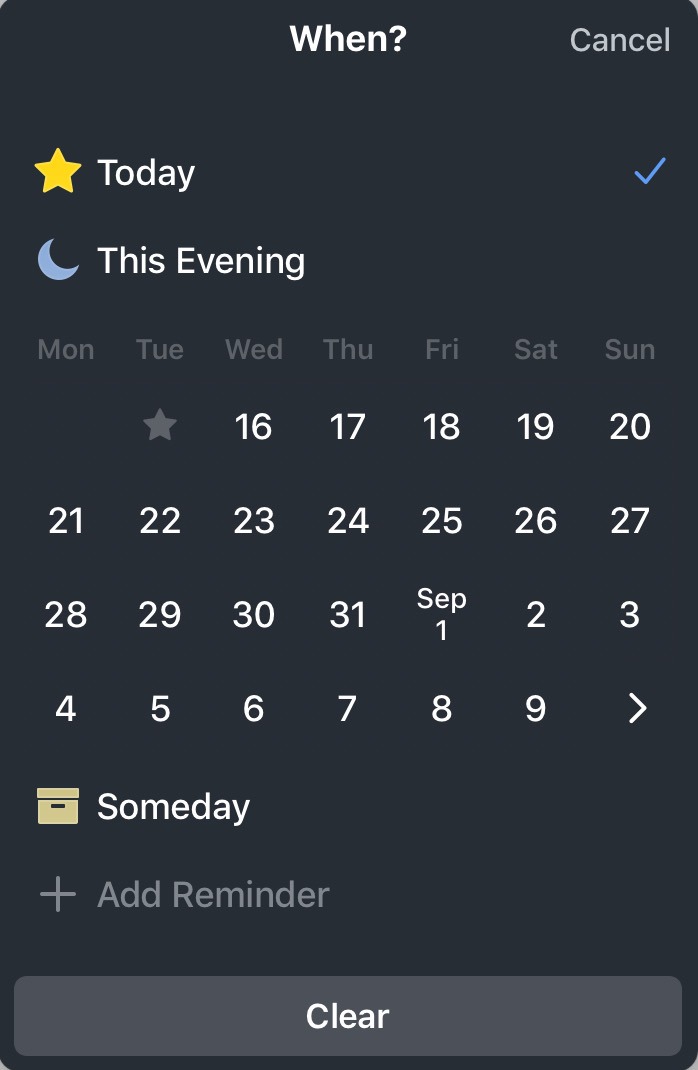 Take that screen in for a moment and look at the lack of logic which exists there. The lack of precision. Today? This Evening? Someday‽ I mean David Allen would shit himself.

And yet, it’s perfection. It’s what we need. Sure you can set a “real” date, or even a “reminder” for the item, or you can just toss it into a general bucket. What does “this evening” mean? Does it matter? Because we all know what it means, and it’s so good. Why isn’t this in every app?

And that Someday bucket? Without even telling us, we are creating a literal bucket list within our task lists, so that we can remove the weight of trying to remember that item, while simultaneously never having to see that item again. I’d love to see a psychologist, or perhaps an anthropologist talk more about this, because Things feels like it was designed for the human psyche first and foremost.

Things doesn’t make you jump through hoops, or follow a logic tree to set about doing things with tasks. At it’s most basic level, it’s like telling a personal assistant to remind you to do something. You simply would not tell him “remind me to take out the steaks at 7pm” — who does that? You’d say later, this evening, or someday. Things gets that.

While the app immediately clicked, and was at once dead simple to get started in, it’s taken me quite a while to realize what actually makes it so good. It was simply designed with the understanding that real people are going to be using it for real life.

What an amazing piece of software.