Another brass pen, but this time it writes in space.

A new brass pen, that uses a Space Pen refill and just might be far more durable than the Space Pen refills themselves — which is saying quite a bit. But it’s quite heavy, so let’s start by talking about that. 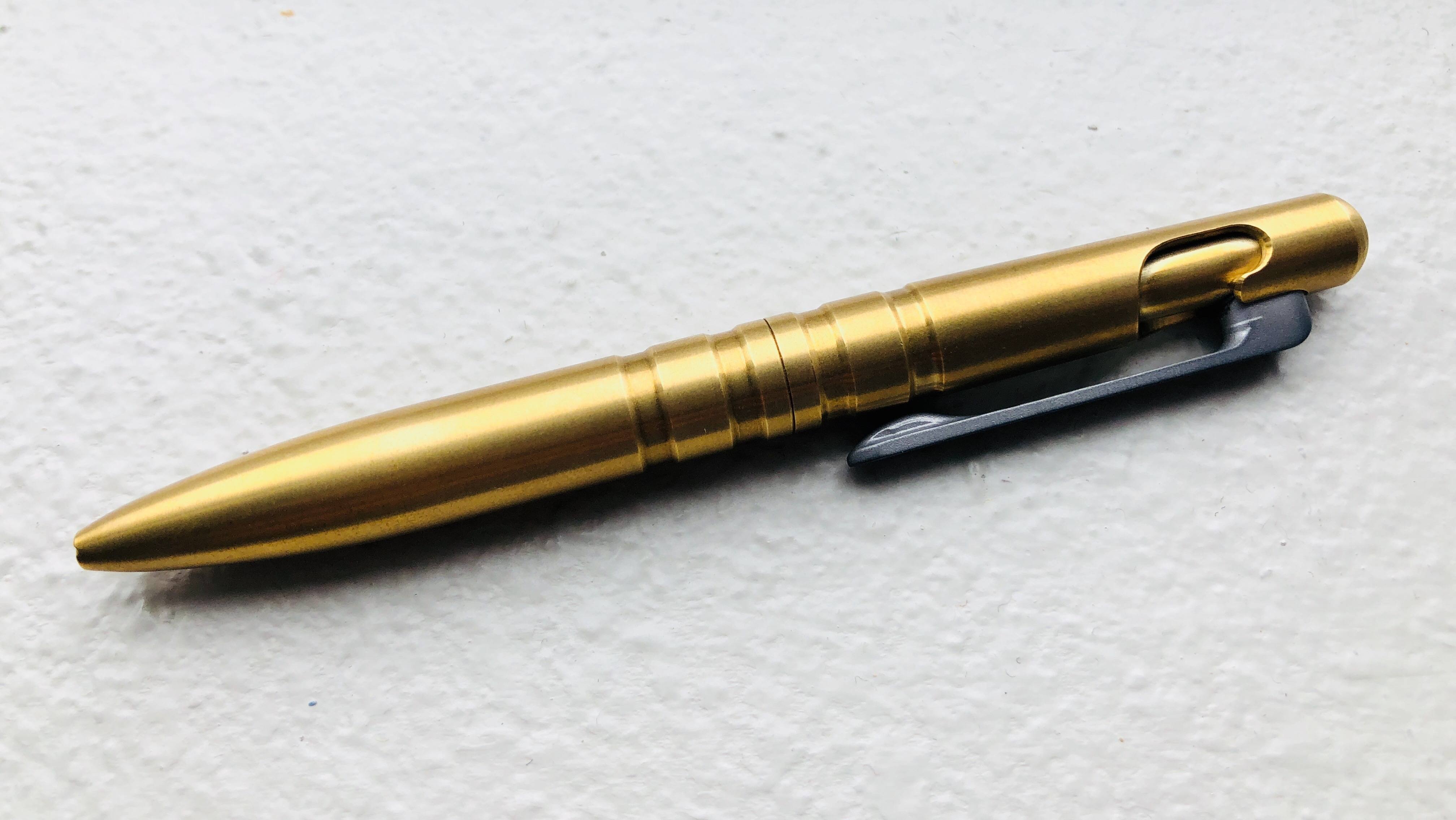 This isn’t the heaviest pen I have, but it’s certainly one of the heavier pens. What is very nice here is that the weight is actually well balanced and very comfortable. If heavy pens aren’t your thing, then I could see you passing up the original Machine Era pen, or the Namisu, but that shouldn’t be a reason to pass this up (and they make other variants as well).

Overall the weight feels just about right in this pen.

This is my first go with a quasi-bolt-action movement. On the Field Pen the retaining clip slides down, over, and slightly back up. It’s incredibly addicting to play with and I really enjoy it. I do find that as a lefty it took a lot of getting used to, perhaps a lefty version of the deployment would be a very nice touch here, with the mechanism being reversed.

This is also one of the few deployments where I never accidentally deploy the pen, nor does it recede back when I’m not intending. It’s very intentional, which is great. (I loathe most pens that twist to deploy the tip.)

This uses standard Fisher Space Pen refills which are nice in that they work on just about any surface, don’t leak, and are rock solid. But are also shitty because they don’t dry fast enough for lefty writers and aren’t the smoothest cartridges out there. I am sure people have hacked in other ink cartridges, but I have not.

I wish it uses a nice gel roller or something like that, but it doesn’t — intentionally so. For what it is, the refill is perhaps the biggest let down of this pen.

At fist I was sold on this pen, and started looking at buying more. But I can’t recommend it in the end. While it looks nice and feels nice, it’s too heavy to carry on a regular basis, and the lack of a cap means it’s not for your pocket. I much prefer the BigIdea Design Ti Pocket Pen to this for a carry pen and that has a much better ink cartridge.

So you can’t pocket it, it’s a bit too heavy to carry in your bag, ok. As far as around my desk, the ink cartridge is not good enough to warrant me using it because after a month of trying, I can’t stand the ink smears on my hand — lefty problem I know — but I have far too many other options to consider this for the desk.

So while this is an extremely well made pen and one I enjoy using and fiddling with, I don’t think it’s worth the rather steep entry price, and a pen that I likely will find myself using much less now that this review is written. Perhaps a non-brass variant would make it a better pen to carry, but then you would lose some of the heft which makes the pen quite unique.