I ran another round of content blocker testing for Mobile Safari in order to take a look at which ones are the ‘best’ right now. To be fair: it’s really hard to find these content blockers on the App Store now, so I grabbed the ones which looked the most popular to me (top lists, and top search results) and then did the testing to see which was the best.

Now, I am using a particular word choice here: best. In the past I mostly evaluated on speed or website size reductions. This was problematic because a content blocker could work out to be very fast, while still breaking the usability of the site. To that end I redid my testing parameters to evaluate the following:

From there I set on overall rating on each blocker. I used Ben-scale. Ben-scale is a descriptor system with things like:

And other scales of that nature. For instance: what does a grade of C mean? Who the fuck knows! But we all know what a grade of “meh” means. Here’s the apps I tested: Purify, Distilled, BlockBear, AdBlock, Wipr, Better, Weblock, Crystal, 1Blocker X, and Firefox Focus.

Of those, I disqualified: AdBlock, and Weblock for trying to setup bullshit DNS proxies for your devices. They both ended with an overall rating of ‘fuck off’ so I recommend not using them.

Of the remaining I further do not recommend:

That leaves us with: Firefox Focus, 1Blocker X, and BlockBear. Of those, 1Blocker X is leagues better than the rest.

The good is that you can trust Focus. I did profile most of these with Charles Proxy running to see if there was anything nefarious to see, but Mozilla is an organization I think we can mostly trust right now. And they likely will keep this under active development. Something which appears to not be the case with many other content blockers.

End of the day, I don’t see a huge advantage to using this over either of the next two, but its popularity makes it an app to keep an eye on.

This is the content blocker I personally use, but I honestly had no clue at all if it was still close to the best. In my raw speed tests it was tied for first (three apps were within the margin of error for testing, but way faster than the rest at above 40% faster than nothing). There’s one major flaw with 1Blocker X: it can be confusing to configure.

There’s a plethora of options in the app, and though the onboarding makes it a bit easier, having to toggle on SEVEN content blockers inside Settings.app will be confusing to some. The app works by turning all seven on, even if you aren’t going to use all seven. Which is something I only know because I was part of the beta testing for the app. Otherwise I too would be confused. To toggle off features you don’t want, you do that inside the app. This, and this alone, is my only complaint about the app.

Not only is 1Blocker X among the fastest, it also has far more customization than any other app. There is no shortage of options, and an immense amount of power to be done in the share sheet. For instance you can easily configure 1Blocker X to block all Facebook URLs, something I recommend. You can also use a visual editor to block specific items on a site you may not want to see again, it looks like this: 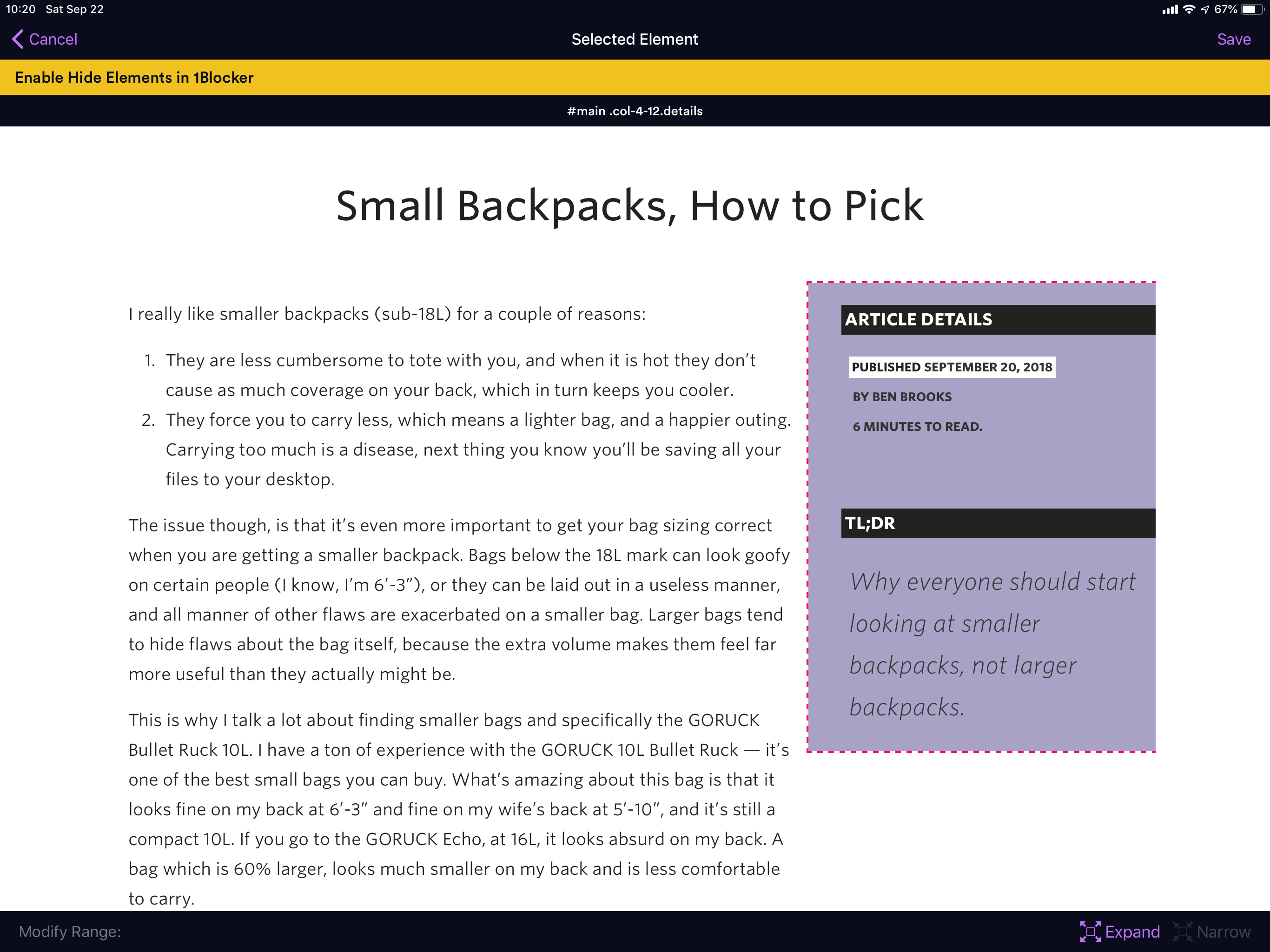 The purple area would then be hidden on any future visits to the site. Now, it’s not perfect, because it is looking at the underlying code, not what you see. So I couldn’t select just the tl;dr section, but only the entire block. Some of this will depend on how well architected the site is. But, it’s there, so if there’s a site you visit often with stuff you can’t stand, you can really start slicing and dicing at it.

Ultimately, I use 1Blocker X because of the customization, which syncs via iCloud to all your devices (so you only have to tell it something once), but it’s great to find out it is still among the fastest.

My overall rating on this was: quick, not perfect. If I needed to tell a non-technical friend or family member which content blocker to use, this would be the content blocker I would tell them to use. The setup is “cute” and dead simple. The entire app is dead simple actually, and it worked pretty well overall. No customization, but it does have whitelisting if that family member keeps having trouble with a site.

And it is fast, as it is tied for the fastest of the group. It’s not what I recommend for most people who regularly read this site, as I suspect you’ll want the features of 1Blocker X. That said, I can understand why you would use this. It’s simple and easy. And that you can whitelist from the share sheet in Safari, only makes it an even better pick for those who want ease of use.

During my testing I did notice a few oddities going on with blockers in general. Here’s what I found:

Lastly, no content blocker was perfect in my extended testing of the above three. They each eventually broke some site in an unexpected manner. My suggestion is to whitelist those sites and move on with life. Content blockers aren’t about being perfect, they are about making the web suck less.