Let’s just be honest about the fact that we are addicted to escape, and phones offer a convenient way of escaping.

I saw an article recently, which shared a ‘new tip’ for dealing with distraction in the digital age. The tip: keep your phone near the entrance/exit to your domicile — and if you need to use your phone walk to it and stay in that area while you use it. This, they say, is a great way to keep yourself from being distracted.

It’s also incredibly stupid. There seems to be this idea that tech itself is addicting and that many are handcuffed to tech by way of their phone. And so often the advice, like that advice above, is along the lines of eschewing tech during some part of your life. It’s bad advice, it’s avoiding the hard questions and finding a scapegoat.

Some advice I see over and over again from people (probably some of it I have tried, or espoused at some point too):

There’s so many more, but the truth is, if that is the route you are going to take, then why have a smartphone? Why not not have a smartphone? Because you can’t function in this world without one, right? Yeah, so then why do all that bullshit above? All of that above is like buying a Ferrari and then stripping away your use of it until it is no better than a golf cart. Like, just get a bicycle at that point.

What this type of advice fails to do is to do the increasingly hard work of figuring out what people are actually trying to curb, and why. Most times, people want to curb the feeling of constantly having new stuff to check, and notifications, and the like. Most people are trying to curb not the act of looking at a screen, but rather the act of looking at a screen when it isn’t necessary.

When I first tried to define what I wanted to change with my smartphone usage, I simply stated that I wanted to read more. But the more I dove into it, the more I realized that I was forgiving myself by saying that nearly everything I do on the screen is reading. So then I revised and decided: I want to read to learn things or to cause me to think. Doesn’t matter what I am learning, it’s the act of that thought that was/is important to me.

Here’s where I have landed: 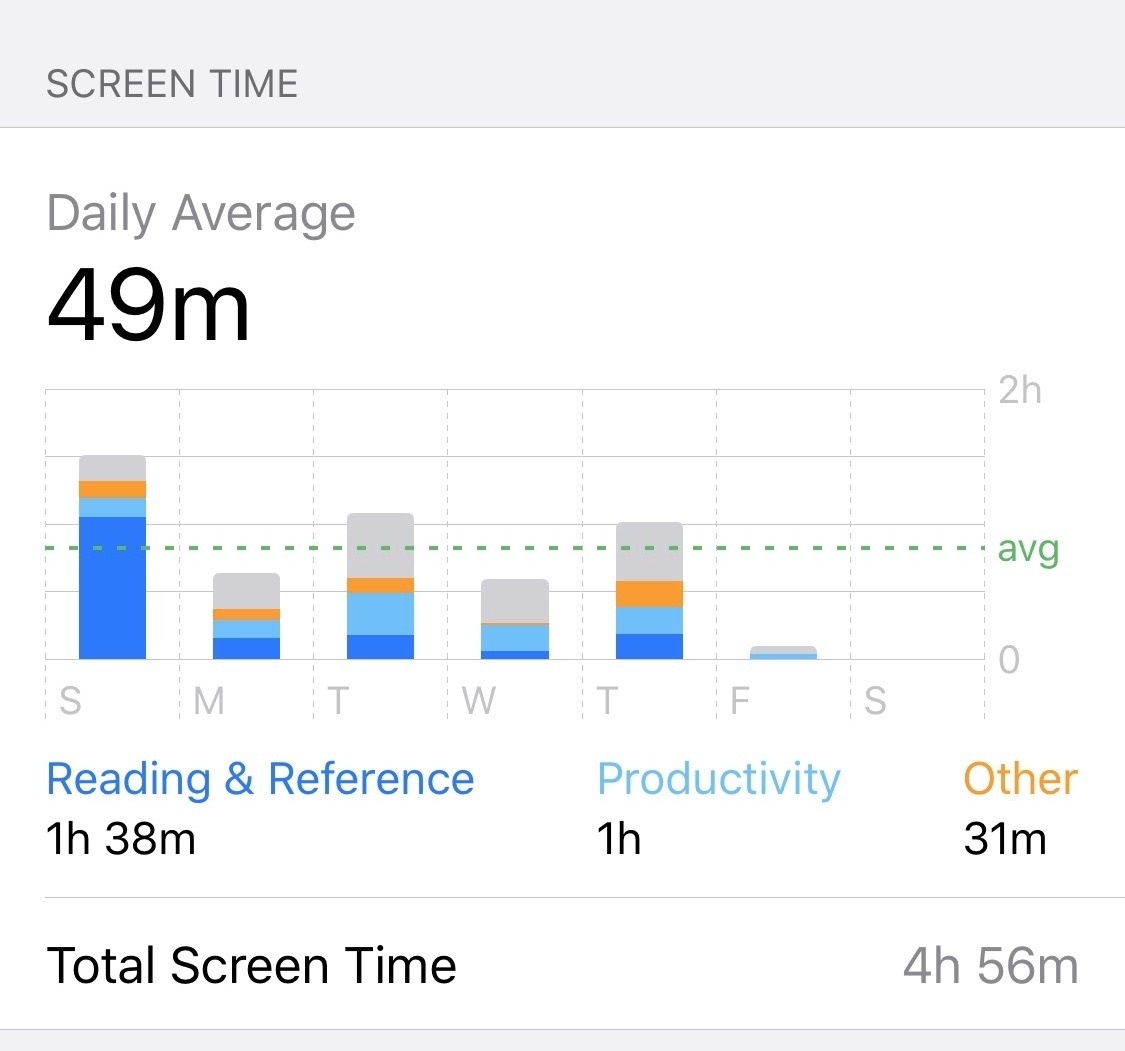 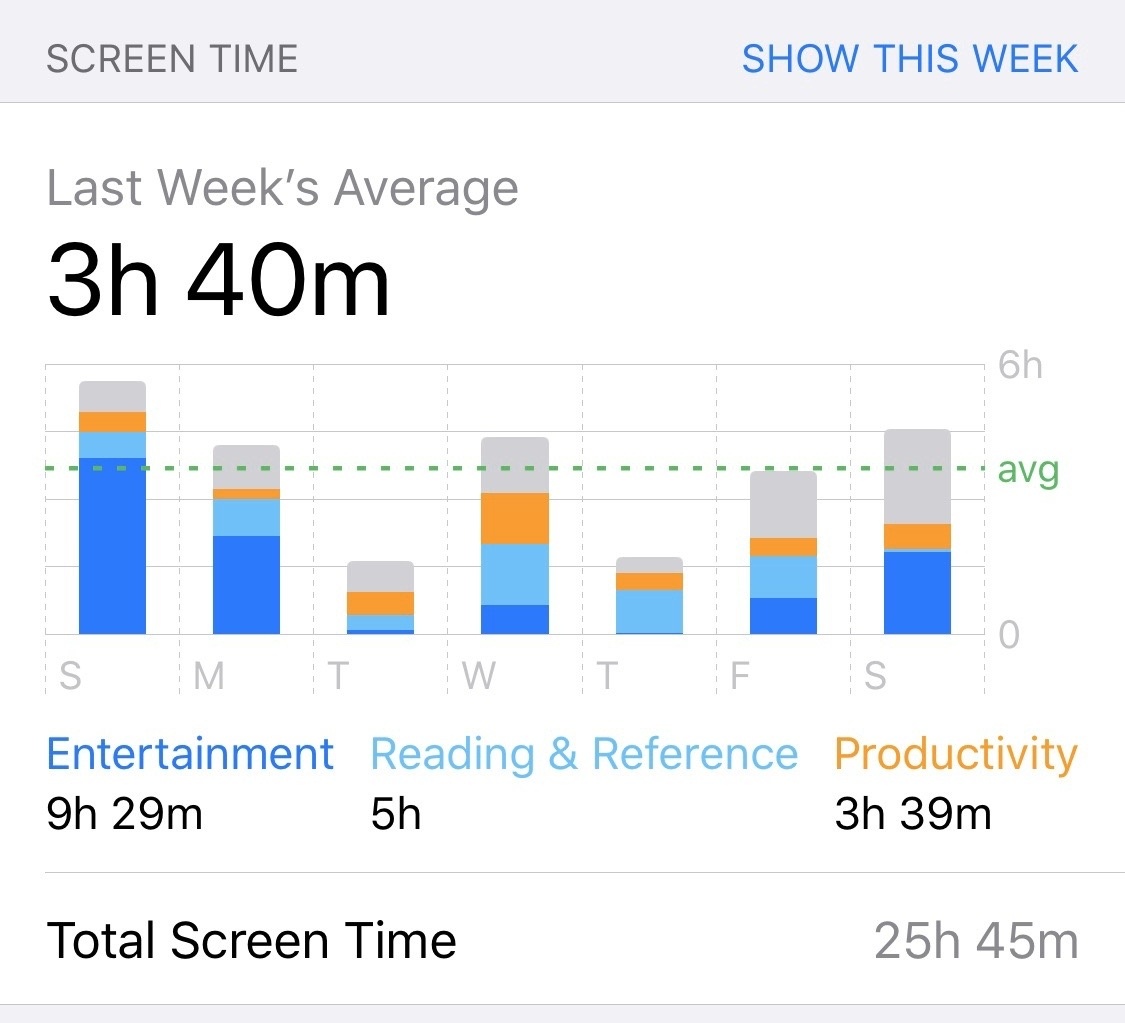 So on that note, here’s how I handled certain things…

I deleted Facebook in 2010, Instagram at some point, so keeping myself off of both of those is dead simple. With Twitter I have Screen Time set to 5 minutes and I only use the app inside Safari. The key with Twitter is that I only look at the mentions tab, nothing else. This works 98% of the time, and it’s only if I am tracking something major or chatting with someone over DMs when I go over that time allotment.

Reddit is the biggest for me, as I spend a lot more time there. I don’t have a good solution if you waste time on Reddit. My solution has been to only look at the 1-4 subreddits which I am interested in, and bluntly acknowledge to myself that the rest of it is a complete waste of everything. Which doesn’t mean I don’t use it, it just means that at least I don’t hide it. I guess. Ain’t no high horse here because r/tifu is gold sometimes.

Prior to this month I kept my reading like such: News, Flipboard, Reeder, Email all funneled into Pocket. And occasionally Apple Books. In December I choked off everything except Reeder and Email, funneling still to Pocket. Now I read a ton in books. I still don’t have a good daily habit, but I read about 6 out of 7 days a week for at least 30 minutes, in an actual book.

What’s changed the most though is what I am reading. Even if we leave aside the books, I am mostly reading longer posts and less “13 tricks” type of articles. I also read fewer reviews on items, as I have massively limited the sites I track.

When I first started this I had major withdrawal, as I felt like there was too much time with nothing great to read. But after about 7 days I was quite refreshed, and now I even forget to slog through RSS at times. I feel blissfully unaware of the moment to moment travesties I should be outraged about.

I am getting more done, and reading more interesting things. This alone is my top recommendation. I find that most aggregation services simple serve clickbait nicely wrapped up to look like they were human curated. Looking at you Flipboard and Apple News.

One thing you might notice above is that my screentime is really low for my iPhone as compared to iPad. You likely rolled your eyes, thinking I was making some point — but that was probably the first time I looked at any of that by device in a half a year. I could tell you that I for sure use my iPad more than iPhone, and I suspect that’s not true for most people.

But I can also tell you it is a conscious choice, and something I attribute a lot of my lack of iPhone distraction too.

I have, over the years, forced myself to rely on my iPad for most of my tech needs and rarely my iPhone. If my iPhone only did Navigation, Messages, Phone, Calendar — it would take me a while to notice that’s all it did. That’s what I use it for, everything else is basically on the iPad.

I am not saying switch to the iPad (I’ve said that enough already), what I am saying is that every time you feel compelled to pick up your iPhone to do something — instead force yourself to pick up an iPad or laptop. And if you find that inconvenient, well that’s kind of the point. Eventually you’ll form a new habit, and start to shift your time away from your phone.

There’s only two tools I really advise, because the rest of it is just removing stuff from your life. The fist tool is Screen Time, but not to track usage, instead to limit the usage of things you want to curb. Perhaps you think you ‘can’t’ dump something like Facebook, that’s fine, set a limit on it for yourself. And not a limit that you think is the ideal, set a limit that you guess is how much you use it already.

Most people tell me they don’t use things ‘that much’ so when they define that they will say ‘maybe 30 minutes a day’ — ok set a 30 minute limit on Facebook. I am not even saying stop using it when the nag comes up, keep using it all you want. The nag is what is important, because it will tell you how honest you are being with yourself — you can’t fix it if you don’t see it yourself. Most people use these things way more than they think.

Next, use reminders. Not to schedule things, but as a way of again keeping yourself honest. For instance, one I have is ‘Read Book’ which repeats everyday. I check it off everyday regardless of whether I read a book, but I do so knowing whether or not I actually did that thing. I would be careful about having too many of these, one at a time is ideal, but I find them powerful for forming a new habit.

It used to be people were addicted to emails, but now it is 190 character updates on every moment of other peoples lives. We are addicted to escape. Which is tricky stuff.

But stop blaming your phone.