You are going to see me carrying this around, and this might be the most affordable thing I have reviewed in a long time.

Note: Lochby provided this item for review at no cost.

Lochby, the rebranded BOND Travel Gear, produces something which I really wanted to give a try: the Field Journal. I have this idea in my head, and that idea is that the A5 sized notebooks are roughly the perfect notebook size for carrying around and still being able to happily be used at a desk. But, me being me, I also wanted to know how you might accessorize such a nice little notebook.

I am not alone in this thinking, as Lochby produces both the Field Journal, as well as A5-ish sized notebooks for it which utilize the coveted Tomoe River paper. I’ve been trying one out now for sometime, and long story short: this is a really good product which moves to incredible when you factor in the low pricing. 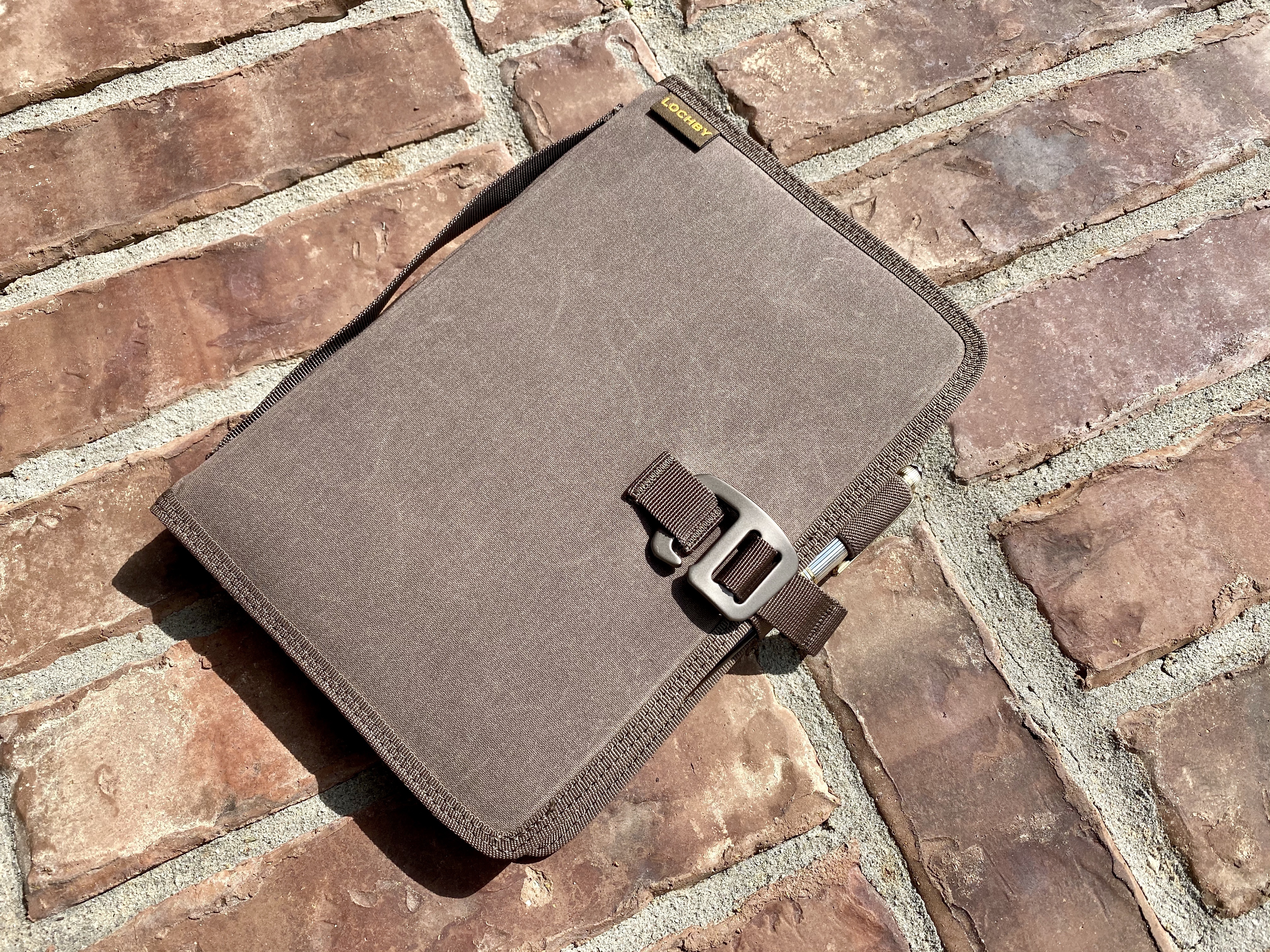 First let’s start with the material, which is a brown waxed canvas. It doesn’t feel waxed to me, but it does patina and wear like a waxed good — which is kind of the best of both worlds. You don’t need waxing on a cover like this, but the patina is a great win. 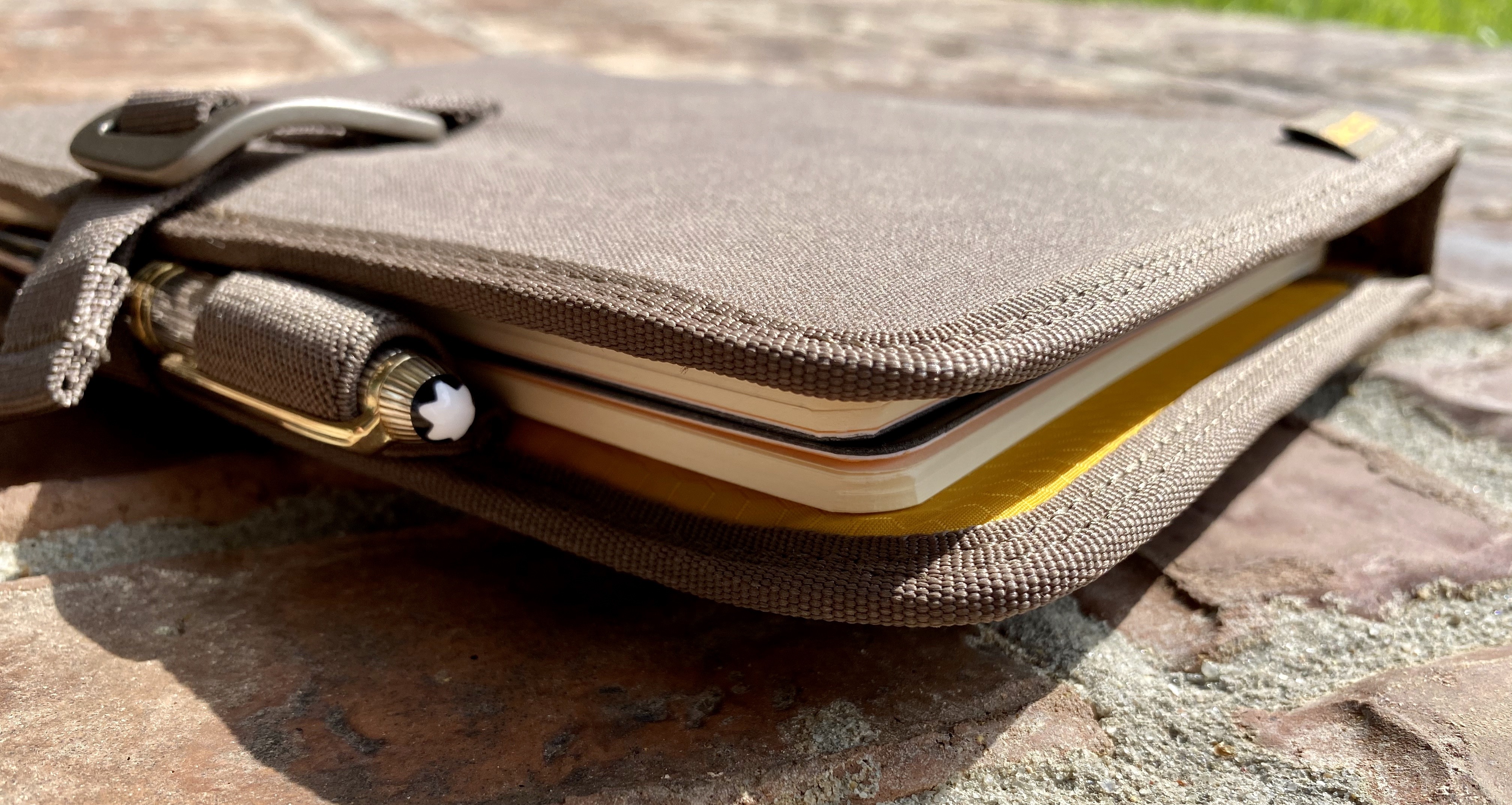 Handling the notebook I find that it is very nice feeling and something that I do enjoy holding. The wear is nice and scuffs fade out over time, as does the memory of getting them. It’s all very romantic, at least for a notebook cover. 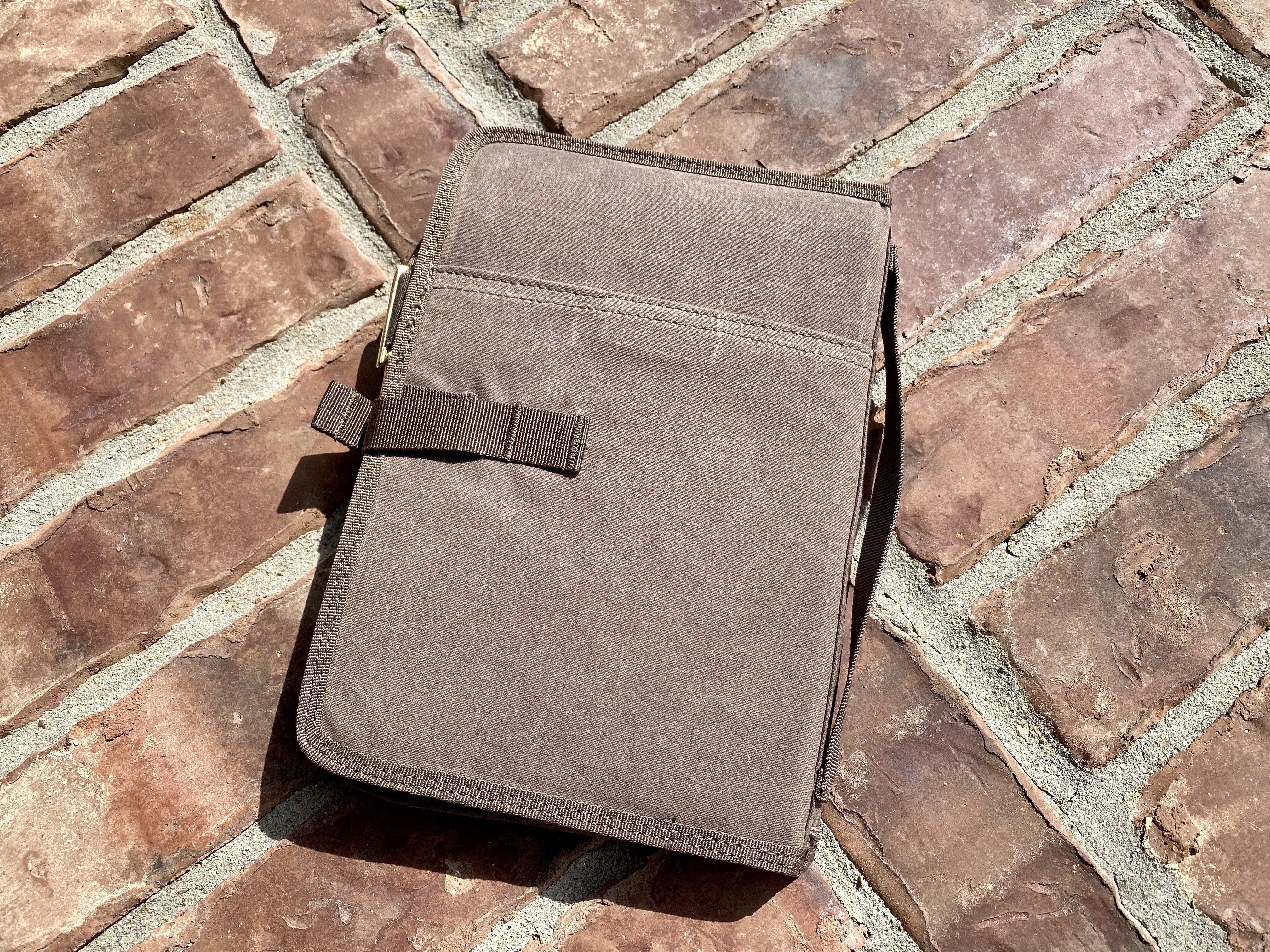 Yes, the concept in raw form is that this is a thing to carry notebooks things in. But I do think it is a bit more than that, and worth talking about a little bit. For one, this very much feels like a cover made to be carried by itself. Not inside something (though nothing stopping you from doing that) but rather designed first to be carried solo. 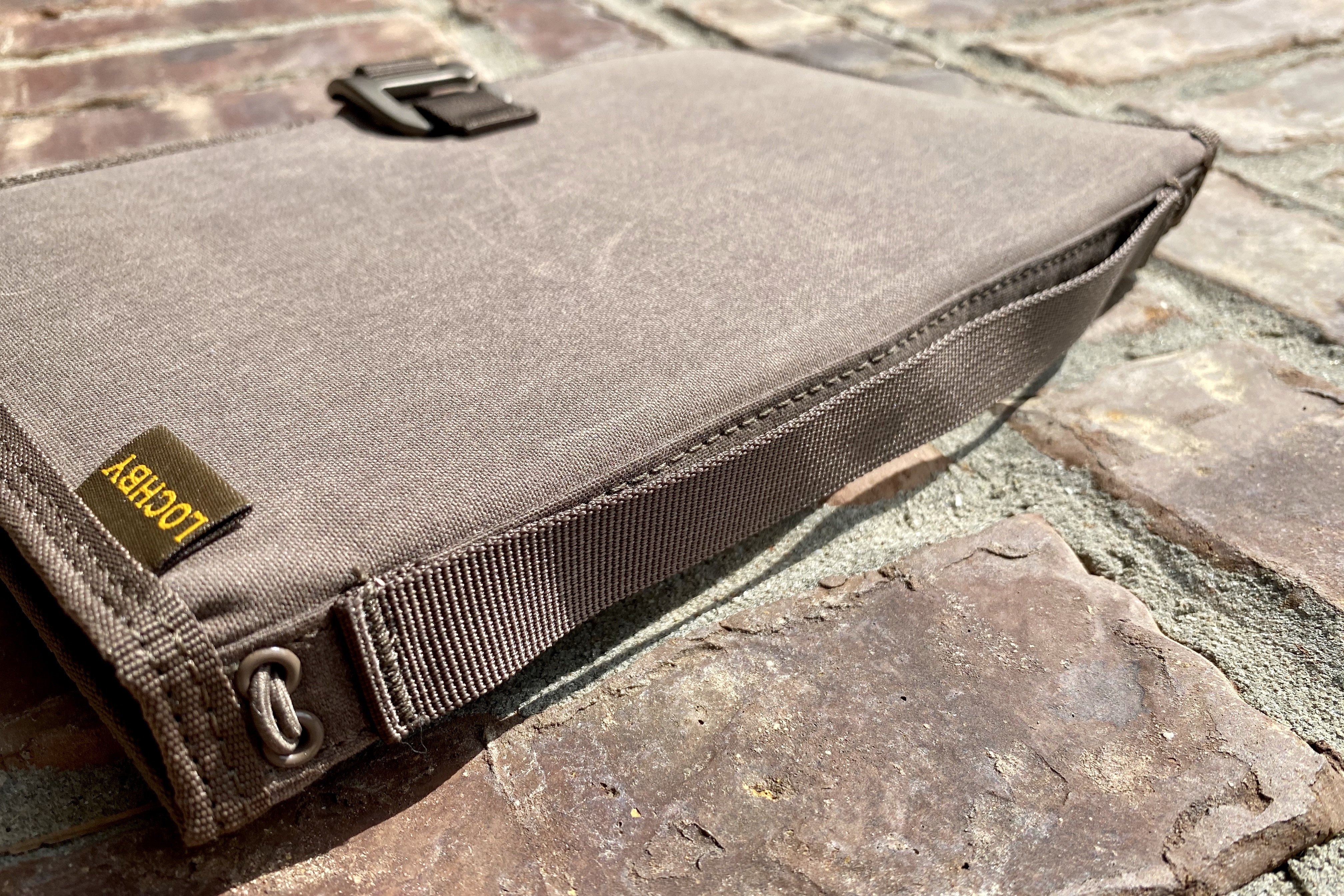 With that in mind the cover has a nylon webbing handle. It has a secure clasp to close it, an elastic loop to secure a pen and various smaller compartments inside of it to carry yet more things. There’s also a handy pocket on the back to stuff more things into. Overall, it can carry many flat things, but just one pen. Which, I don’t know, seems like a trade off I would not want — that is I would prefer pen loops on the inside of the cover, rather than spots for more flat things. 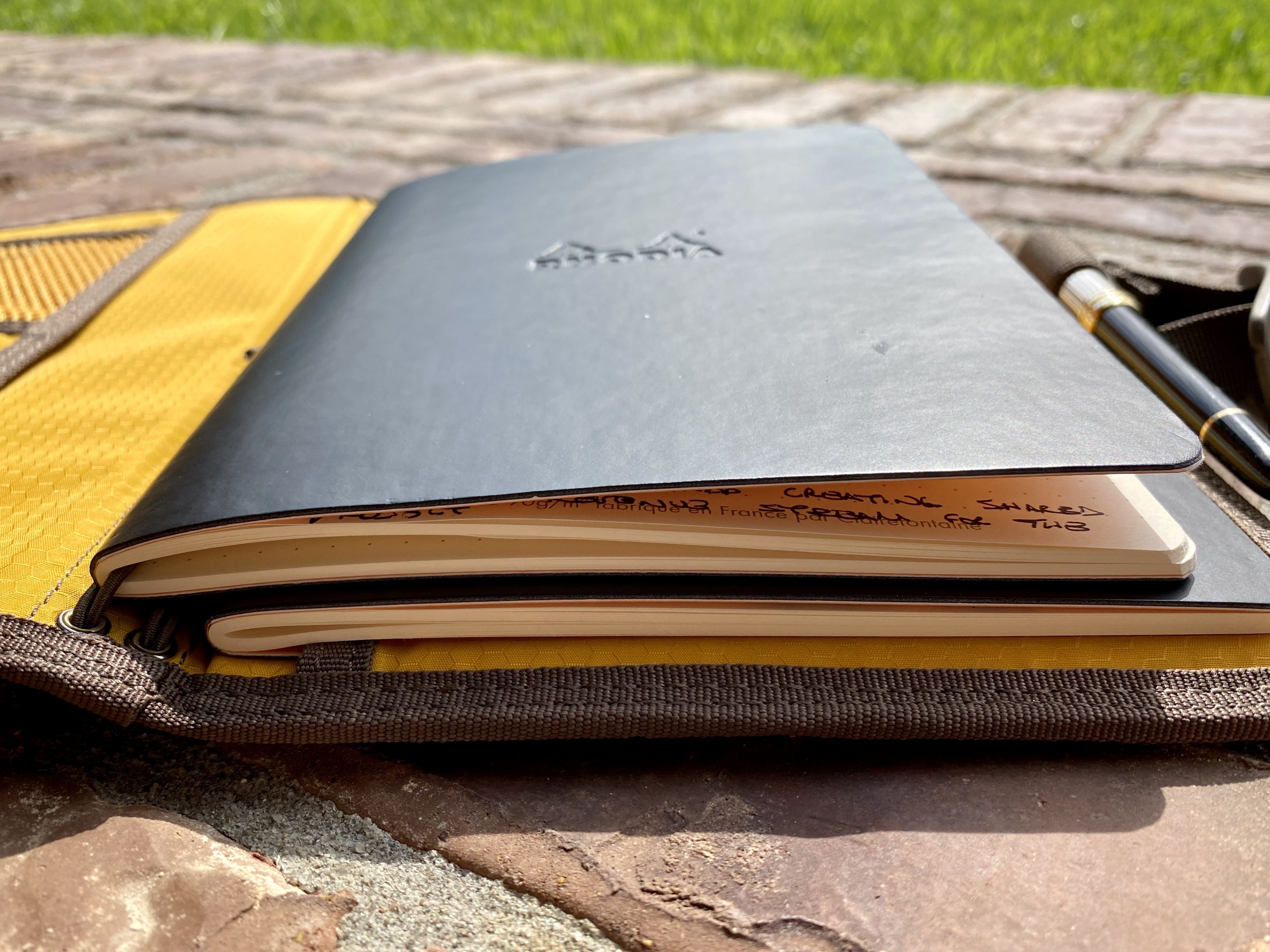 Perhaps the more important concept here is that it is also made to carry multiple thin notebooks. With elastic straps running through the center and a sleeve at the back, you could easily carry 5 thin notebooks, and have all of them be usable at any time. That’s impressive and handy.

As it is, I carry two notebooks: one for work and one for personal things. I love that separation, even if it adds a touch more weight. It’s a great feature and something many will love as it also means you can carry different types of notebooks for different uses. Or just stock up on notebooks and take a long trip with it. All good stuff.

All of that brings us to actually using the journal. In summary: I enjoy using it, but it is not without its quirks.

There are a few things that will annoy some: like how the attachment point at the back for the clasp causes a bump in that one spot, keeping it from laying flat. Or how it is rigid, but maybe not rigid enough for all writing contortions you may want to do. Or the pen loop which is both too big for my smaller pens and too small for my bigger pens — so it lends only towards a certain few pens I have, or those with good pocket clips on them.

All of that is very minor, and trivial. Because in truth, it works well, and there’s really only one big complaint I have: the clasp is annoying. The hook type is just too fiddly and while secure — it has no reason to be that secure since the sides are open. I would much prefer something faster to close, as opening the journal is very easy. And you cannot simply leave this journal open, as the clasp is metal and bangs into everything. 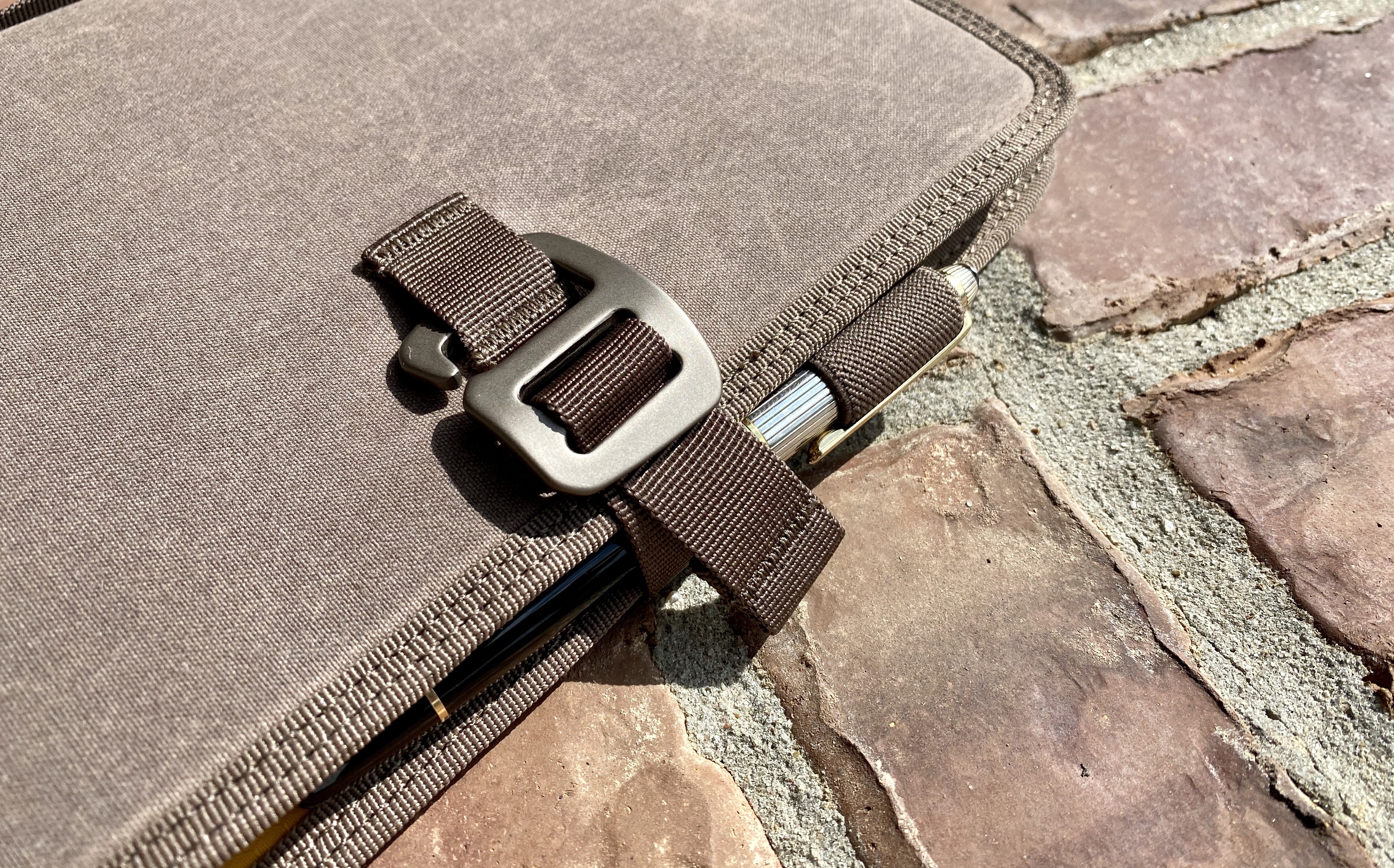 That said, whether I was traveling, in my office roaming from meeting to meeting, or simply here in my home — I’ve been very glad to have this journal as part of my kit. Yes, it adds bulk to my bag, but bulk which I happily accept.

I mentioned at the outset that the Lochby inserts utilize Tomoe River paper, which is a super thin paper, smooth has heck, and which doesn’t allow much ink bleed. For true pen nerds, this is a paper most love — or at least have strong opinions about. I actually like the paper a lot, but you might notice that the Lochby notebooks looks like this: 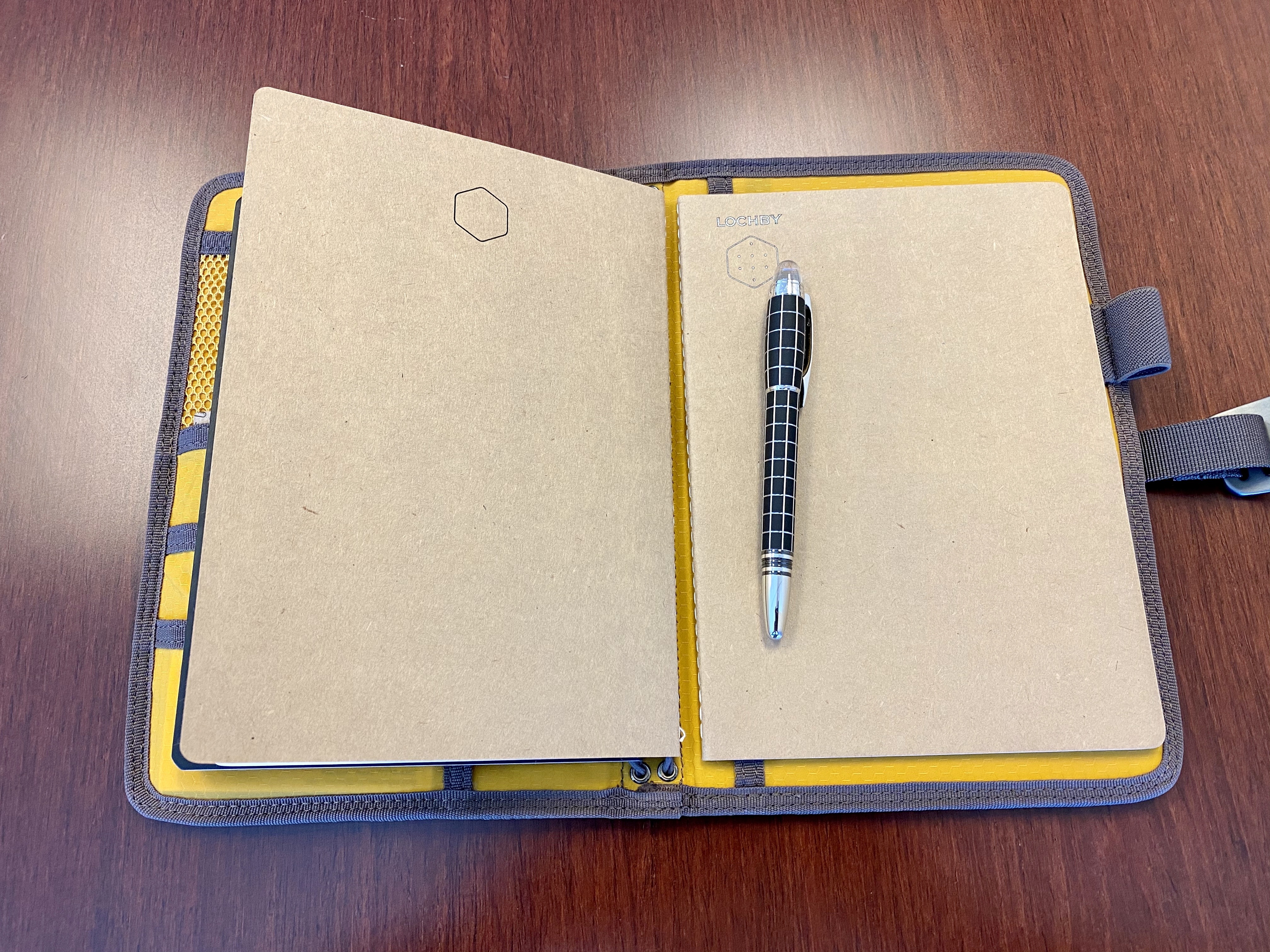 And, well, the ones you see in the pictures say ‘Rhodia’ and look like this: 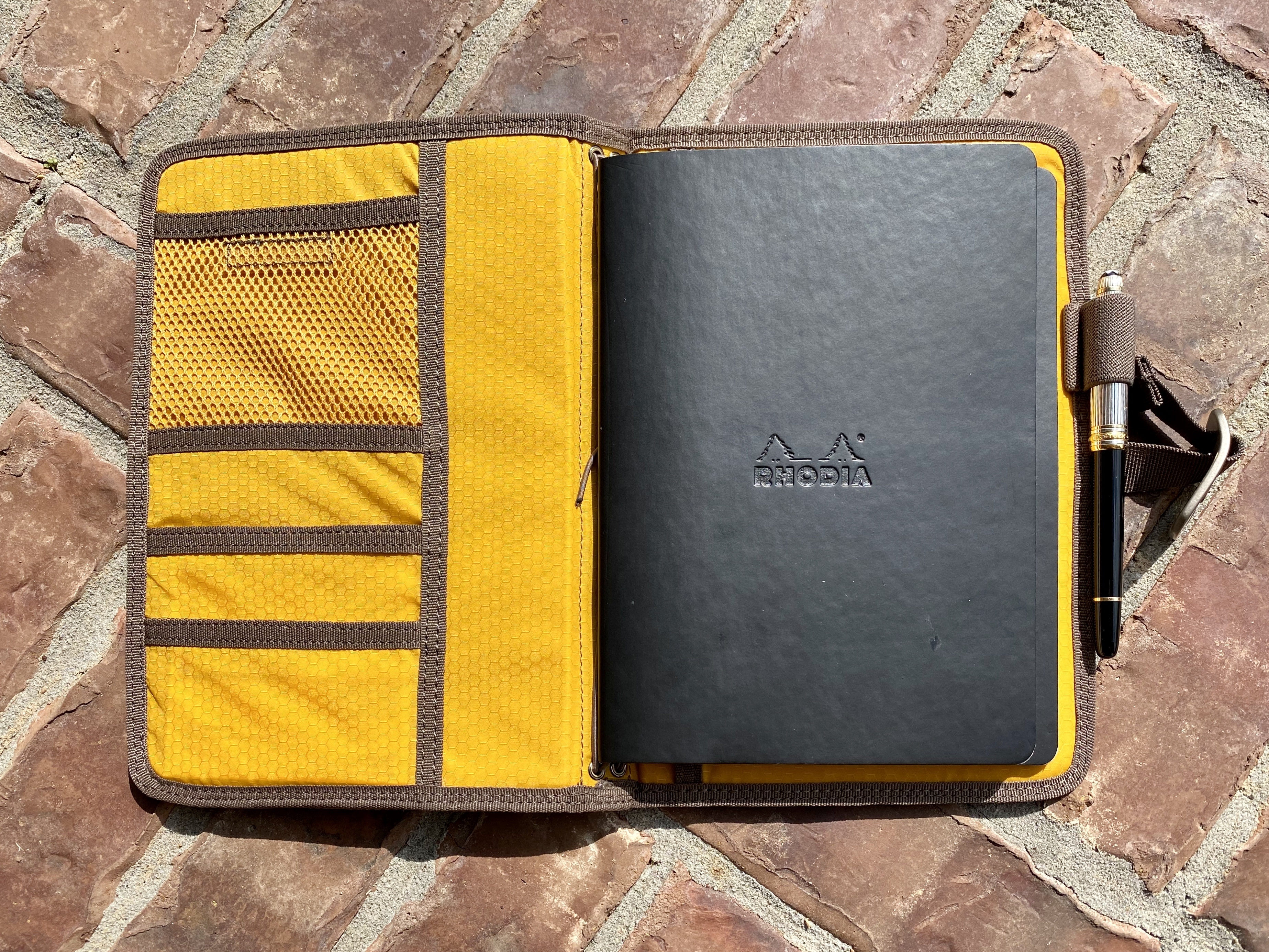 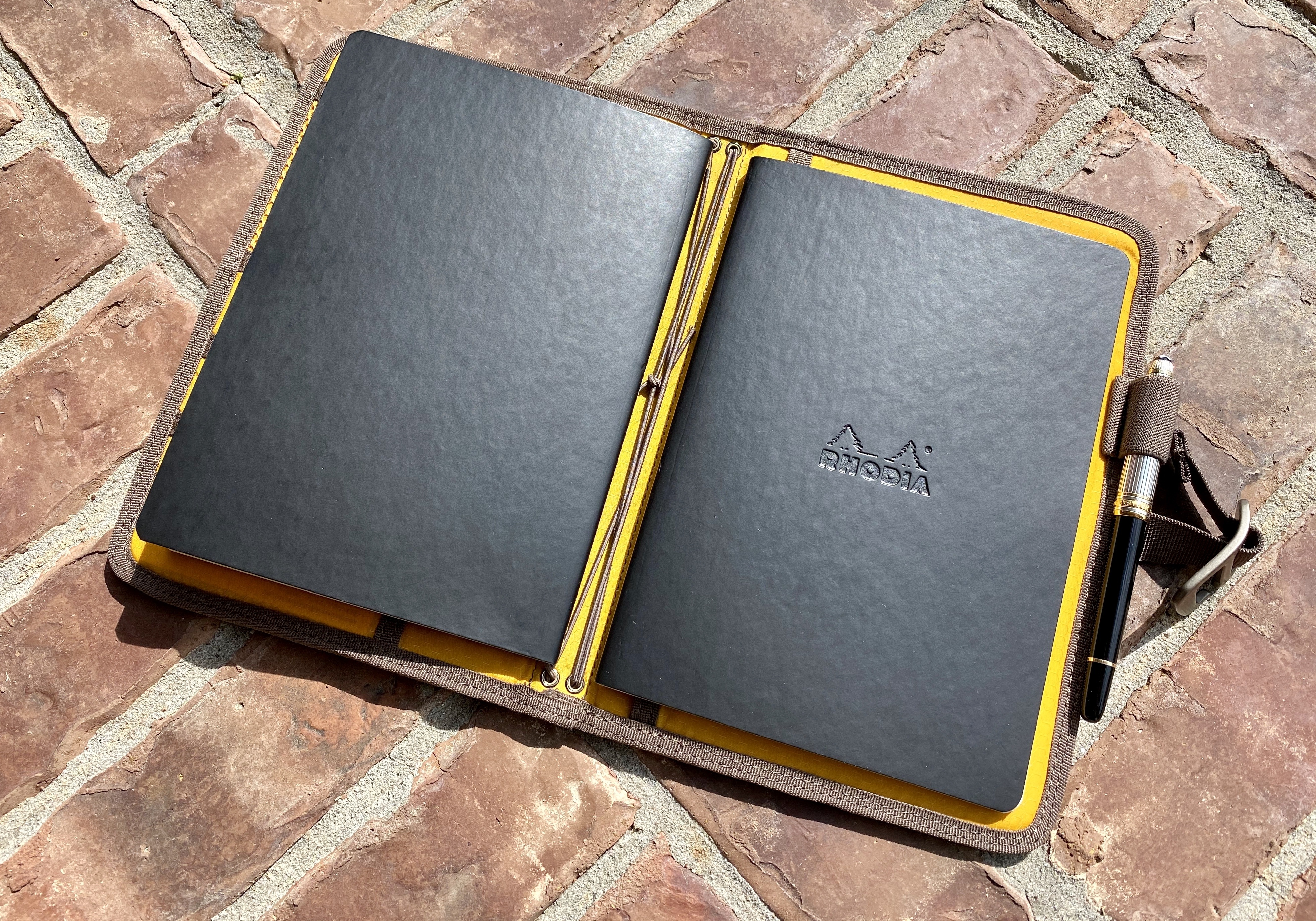 The thing is, the Tomoe Paper doesn’t work with the combination of me being left handed and the Montblanc roller ball ink I prefer and always write with. It all becomes one big smear and my hand ends up with the most ink on it. All lefties will know what I mean, and it sucks because the Lochby journal inserts are fantastic.

But the Rhodia and Totebook paper works significantly better for me.

In short, I like it. I think it could easily be your only item you carry on a day bouncing around meetings — whether that is in the office, or from coffee shop to coffee shop (when those reopen). While there are things which aren’t for me, the fiddly nature also speaks to the style. I like fiddly as long as it seems to point towards something.

That blend is hard to pull off for most companies, and I think Lochby did well with it here. But then you get to the price, it’s $39 — which is absurd, because I could see this at $75 and it would still feel like a solid price. At $39 it makes no sense not to get one, it makes no sense that it is this good at that low of a price.

Personally, mine will see use for sometime to come. Literally the only other option I have even entertained out there costs $199. That’s just nuts, and while the paper doesn’t work well for lefties using Montblanc roller balls, the rest of the journal is nicely agnostic about which hand you write with.