This is more or less a perfect knife.

When Benchmade launched this knife it was everywhere — the distinctive bright blue handle and silver blade. It was loud, and those buying it were even louder. Everyone loves it, the only complaint seemed to be that maybe the handle couldn’t survive (insert contrived extreme example not likely to occur). But the thing is, I resisted getting this knife because it was large, and despite people talking about the low weight, I was unconvinced I needed it. 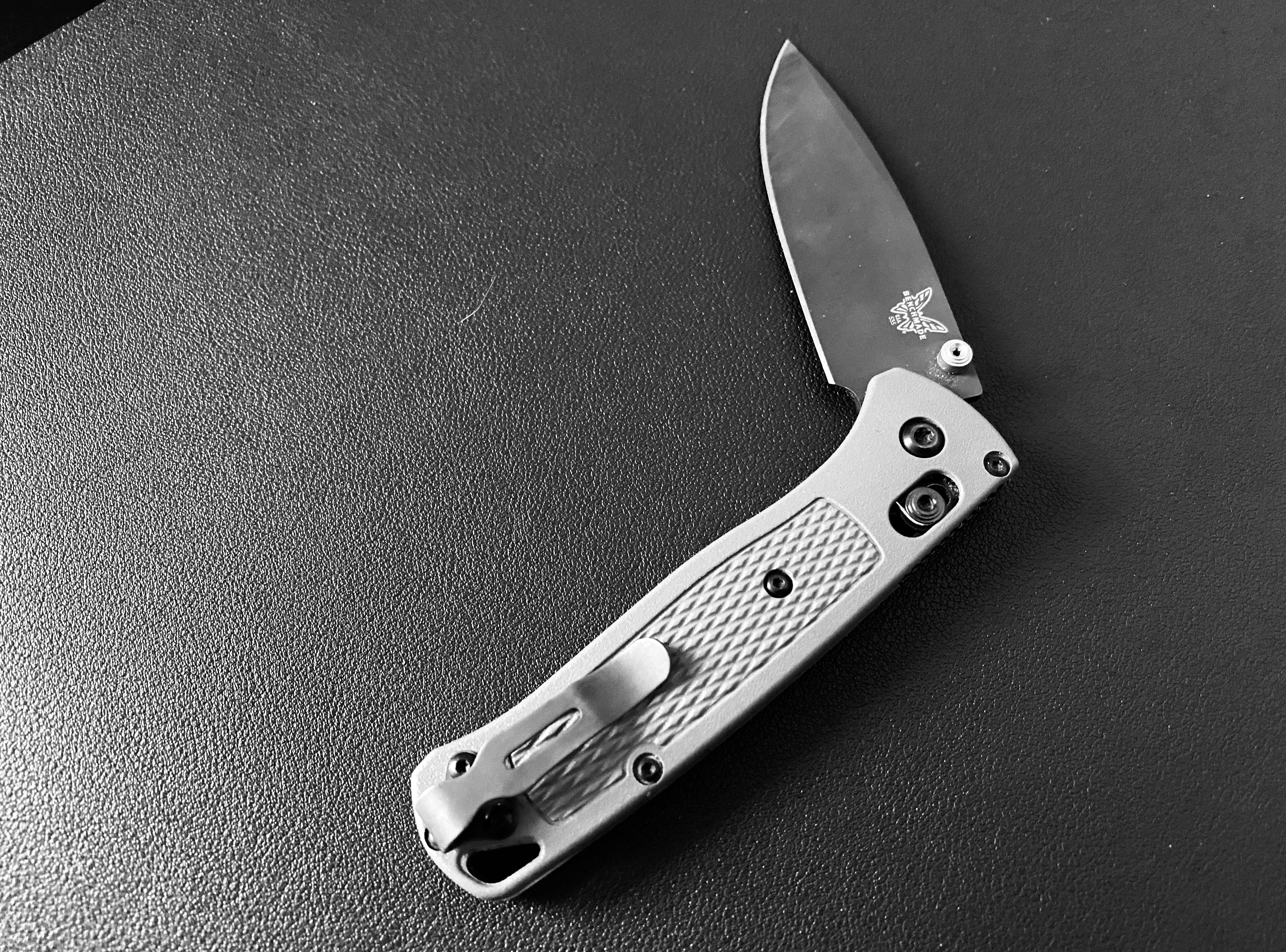 If you are going to carry a large knife, it should be a beast, right? Something that feels like a large knife, and does large knife things. But, people still loved this knife, so much so that Benchmade took the framework for this knife and not only released more colors of it, but recently also released a mini version for those (like me) who wants a small knife, and also made a mad max version called the Bailout (which is 100% tactical, so cool, and yet completely unnecessary for me so I will probably buy it).

I picked this knife up in a new color way, the olive drab handle with dark gray coated blade. I have been using it since this lock down started and I will just say: believe the hype. 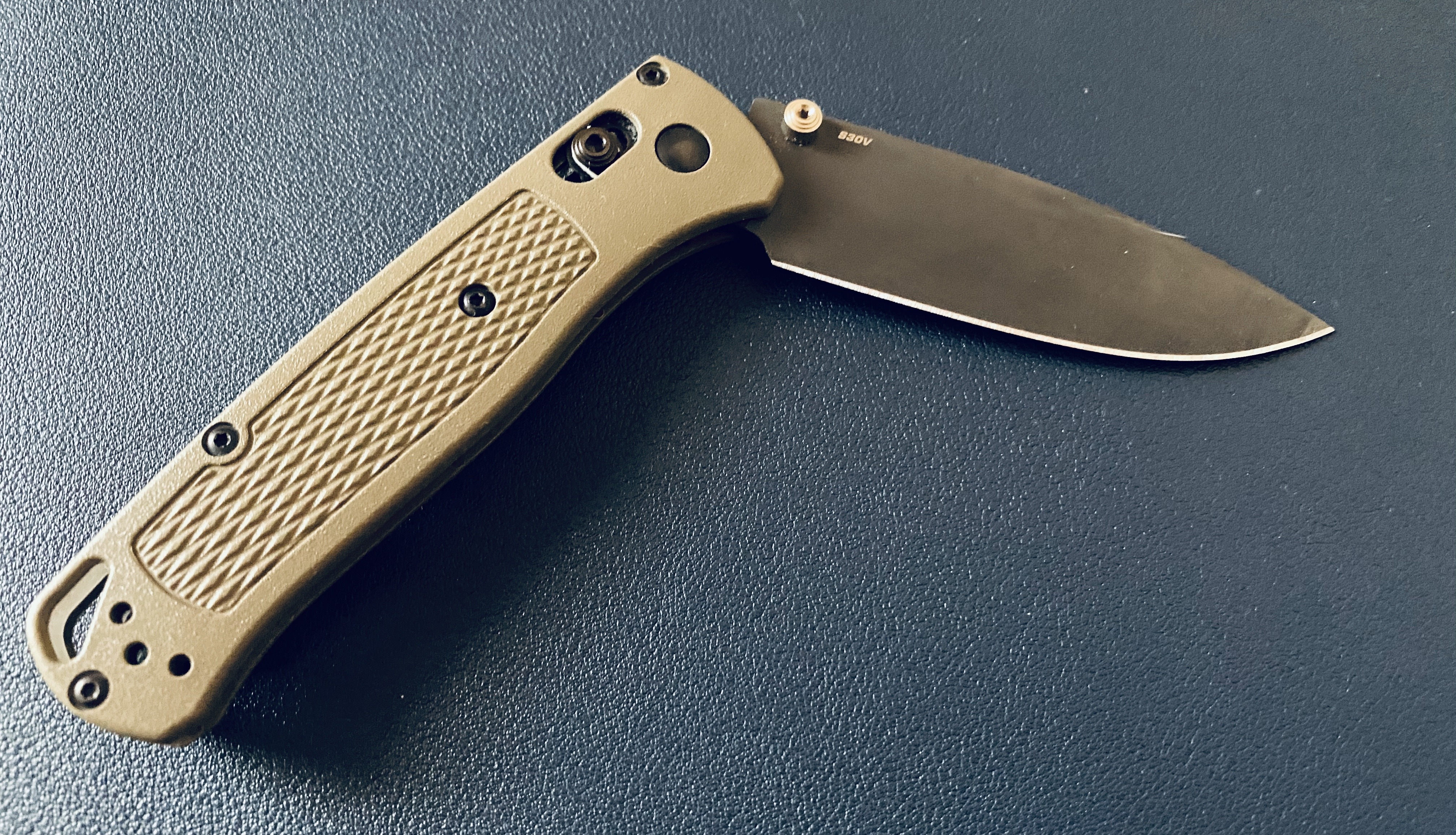 This is one hell of a knife.

I want to start out a bit backwards and talk about how I have been using this knife. As I mentioned I generally don’t like larger blades — I tend to like knives around the 2.8” length mark as that is enough blade for almost every task, and still easily pocketable. The Sebenza 21 I carry is just under 3” in blade length, the Propers I carry are 2.86” in length — but this Bugout is 3.24”. 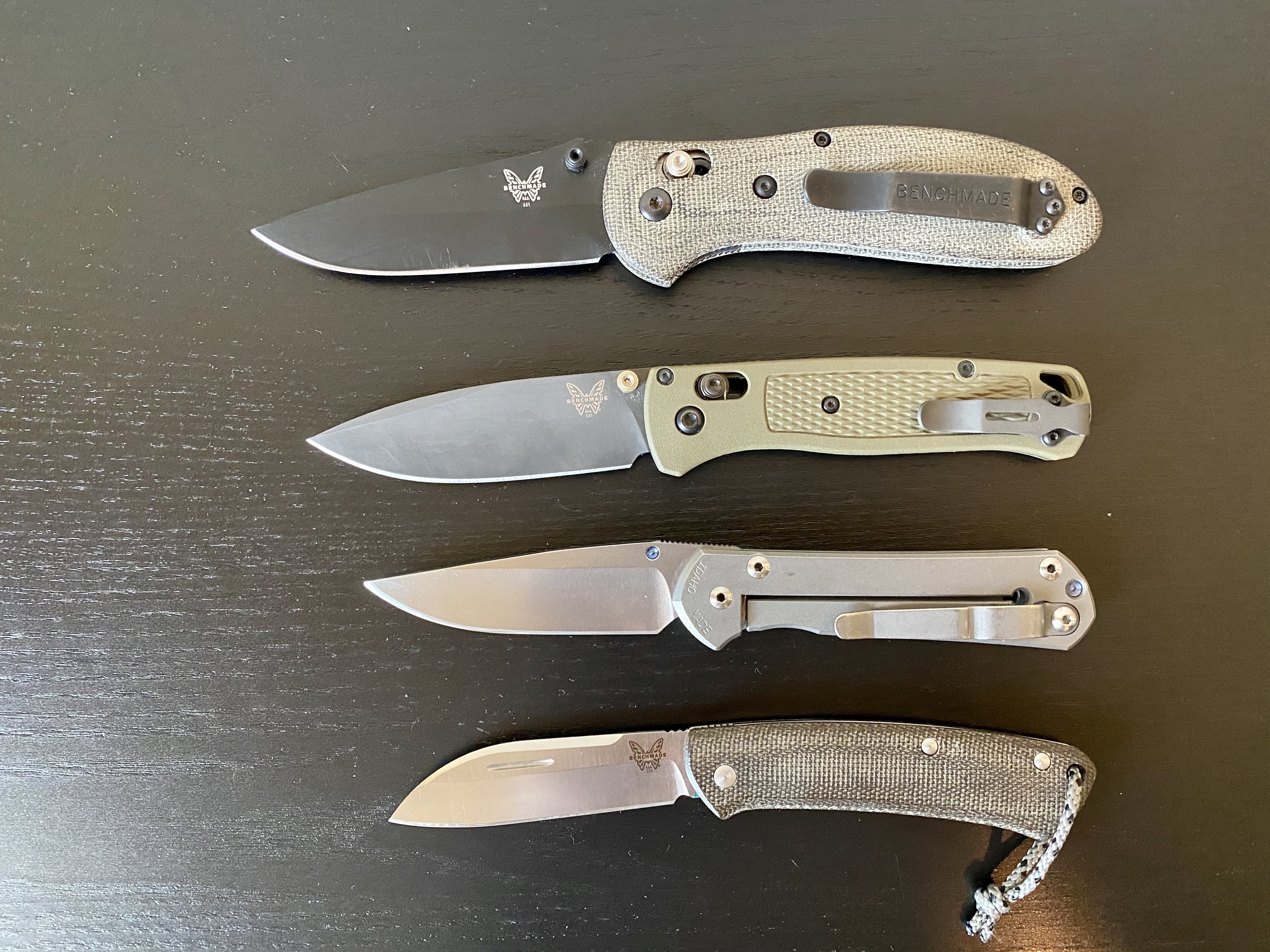 While that might not seem like that much larger of a knife, it is important for a couple reasons. First, many knife laws hold a 3” blade as a turning point — so you need to be aware of that if you carry a larger knife. Second, that’s almost a half and inch larger than the Proper I carry most days — and it is very noticeable in use.

Which is why I also have to say that this knife is really well balanced. It is thin, and light. Which means that so long as your pockets are not oddly shallow, it disappears in your pocket. Whether you use the pocket clip or just drop it in your pocket. When you pull it out to use it, the weight means that the knife doesn’t feel unwieldy in use, it just feels nimble. Something rare for a knife of this size.

Benchmade has struck a near perfect balance. They have made a big knife feel and carry small, while still being able to do big knife things. Amazing.

This is Benchmade’s standard drop point blade, a near perfect shape in my use. The steel is Benchmade’s tried and true CPM-S30V and if anything we know that not all steels are equal even if they are called the same thing. I find that this steel punches above its weight and is otherwise fantastic. 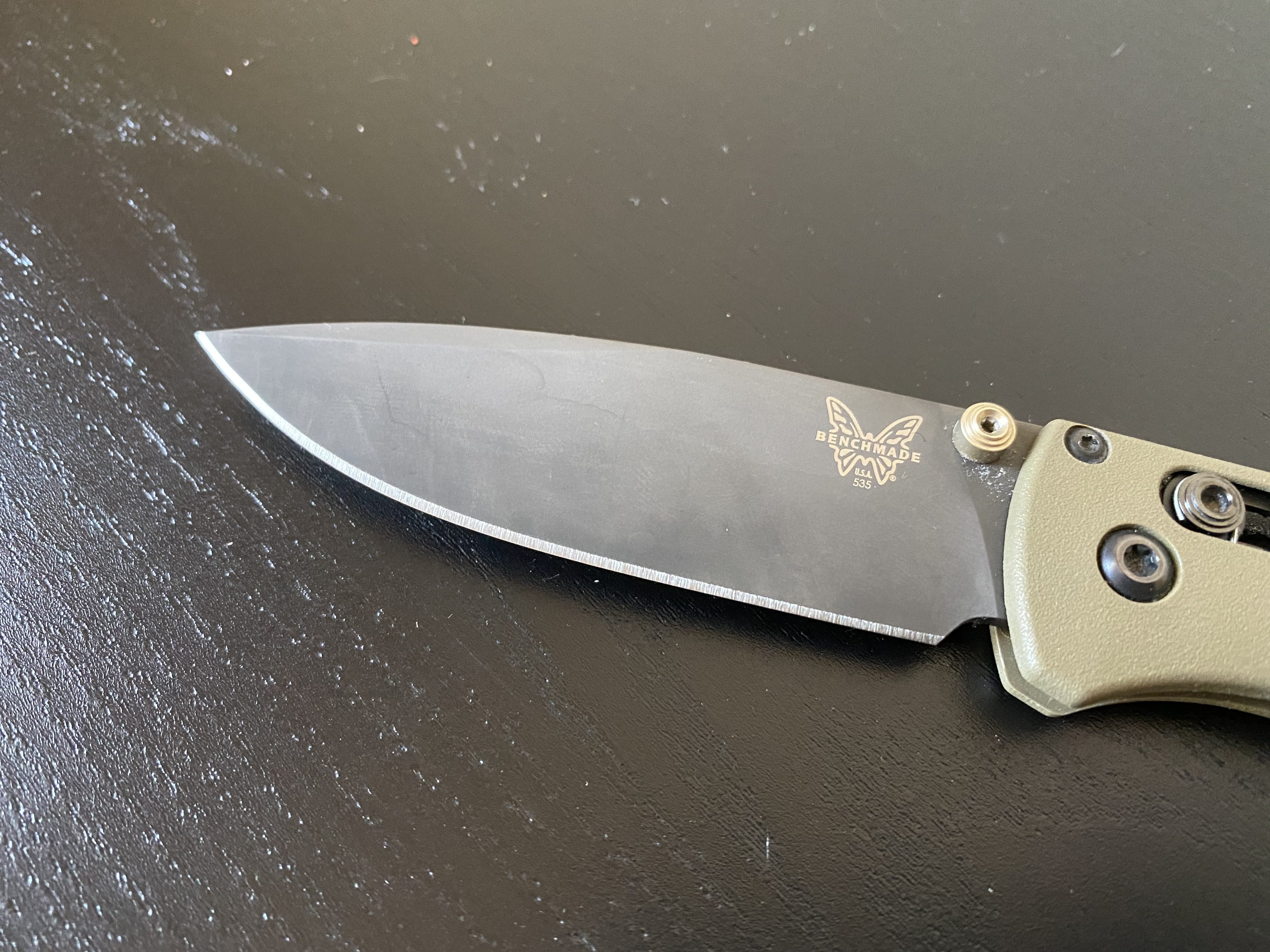 The big thing about the blade on this knife is that it is thin at 0.090” thick (2.9mm) — it is made to slice. You read any Bugout review and they are going to talk about how this blade is a slicer. Some blades are, some blades aren’t this shape lends itself to that.

And in fact when I use it, the weight and nimbleness combined with the blade dynamics do make this blade slice like a mother in limited circumstances. Because this thing is, I made a mistake, I got this olive drab model which has a gray coated blade. And this coated blade is matte, and it adds a lot of friction with certain materials.

If you try to slice an apple, it won’t go that well. It seems to cling to the Apple’s flesh. It makes a sound/feeling like nails on a chalkboard. It is god awful. If I had gotten an uncoated blade (which you should, don’t be stupid like me) then I would probably give high marks.

For going through cardboard boxes, the knife slices the hell out of them. This blade is fantastic and holds a hell of an edge.

And I don’t really regret the coated blade because it looks really awesome.

Benchmade’s AXIS lock system is top class, best on the market and my favorite. It’s the only one I’ve used that is truly ambidextrous and as a lefty this is important. The dual thumbstuds are perfect. The deployment is crisp.

It took about two weeks before the knife felt broken in, but after that it’s been fantastic. The handling and deployment leaves you wanting for nothing.

The biggest thing to know is that the extra length of the blade means that you get a larger handle, which means it fits in your hand like a dream. The handle material is very nice, and doesn’t leave me looking to upgrade the scales. Top marks.

Everything is comfortable and nimble. I feel like I could go into the woods with this and be fine, and likewise I do know it’s all I need for everyday use. And that it carries like a much smaller knife is icing on the cake. 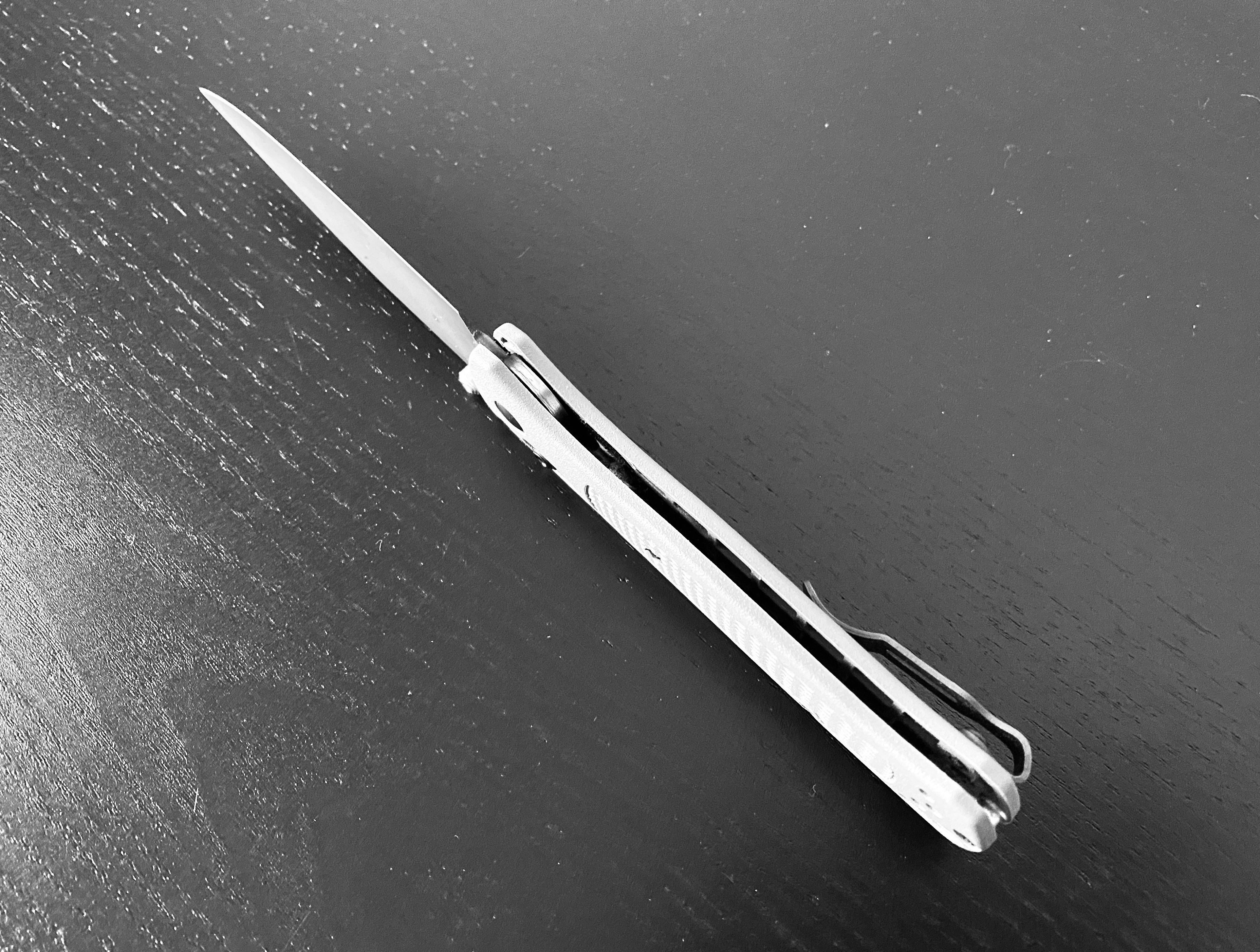 So to recap: the weight is insanely light, the blade profile is fantastic, the blade coating sucks, but overall the performance and pocket-ability of the knife is sublime.

Here’s the thing, this knife is basically perfect. If someone told me this was the only knife they would ever need, I would believe them and not fault them. That’s the thing, Benchmade found an amazing size/weight balance here. Yes, you can fit it in your pocket and carry all day with no issue, and then head to the woods and have a serious knife.

All of this means I will definitely need to be getting the Mini Bugout, but without a coated blade. (Though let’s be honest the stormtrooper model is damn hawt. HAWT.)