I said you should have one, but probably not carry one outside a larger bag — surprisingly Swiss Army rules the roost here.

I don’t love wading into these waters, but it must be done. multitools are super useful, but only if you manage to wade through the crap that dominates the market to find a good one. Most multitool companies completely miss the point. And since there is constant debate around whether or not multitools are worth it, and they are, I took time to test a bunch to see what really makes for a good multitool — to see if I could find one.

After testing over a dozen multitools, I will summarize as: most are not ‘worth it’.

Most of the plier based multitools (think classic Leatherman) are not worth your money. The best true multitool I found is, comically, still a good old Swiss Army knife.

When you talk about multitools you are going to get people roughly filing into one of three categories (if they have an opinion on such things):

I fall into the middle, typically carrying a knife plus a flashlight. But I still like to have a multitool nearby, usually in my different bags.

Important Tools to Have in a Multitool

Where I run into issues with multitools is the tool offerings on most of them are complete crap. Are these designed by people who only watch TV shows to determine what you might have to do in a day? I don’t get it.

Pliers on multitools are typically needle nose pliers, which are the least useful of all pliers for all but a few specialized use cases. Ideally, these should be linesman style, channel lock style, or traditional pliers — any of those would be more useful for everyone but say fishermen. Regardless, if you are going to equip with needle nose, the hinge should be strong enough to resist twisting torque on the pliers — such that they still align after ‘improper’ use. Of the eight pairs of multitools I have with needle nose pliers only 2 of them faired well in this test. The rest failed in predictable ways.

The knife blades are generally bad on multitools. Most use low grade steel which dulls fast, and even more use non-standard blade shapes to make the blade fit in the handle. Equip a standard drop/clip point and use at least 154CM or S30V (I know some have this, most don’t). A knife is already hard to use well on a multitool, a dull one just adds to the danger. Make your multitool safer by using better steel. Or give me something else than a knife blade that won’t last past one Amazon box.

Phillips screwdriver, I could spend all day on this. But most multitools have such a shitty Philips driver that they are not worth using at all, as you are likely to just strip the screw. (Side note: philips screws are the worst screws, and the USA needs to stop using them.) A good Phillips driver is symmetrical and round. But most multitool drivers are flattened, and thus shitty — this is done to fit it into the tool in a more compact manner. To use a flatten phillips driver well, you need to hold the driver square into the screw head and you need to apply good pressure, anything less and you will destroy the screw. This is nearly impossible to do given the shape of multitools and that is why a good Phillips driver is absolutely critical.

Scissors, well I don’t think I need to expand on those. Very nice to have.

Thus, in my hierarchy of multitool needs, I grade the tool like this:

I think you can fail a combination of 2 or 4, but failing the first one brings me to the: why bother? There is no good reason to carry a multitool if the Phillips driver is shitty.

Pros and Cons of Carrying Multitools Over Anything Else

Why carry a knife if you could carry a multitool?

Pros:
– Can be all you need to survive/thrive.
– Can be niche or specialized to your specific needs.
– Something is sometimes better than nothing.

Cons:
– Not particularly great at any one thing.
– Big and heavy to carry around, or too small/weak to be worth carrying around.
– Often having nothing will allow for easier, or creative problem solving.

You can make the case for, or against, these all day long. I will take a true knife over a multitool given a choice forced between them. However, I will almost always have a multitool nearby, because they are damn useful.

Let me state one more closing thought here: Alone is perhaps the most realistic survival show we have on TV and there are people on Alone who forgo knives, but there are not many people who forgo Multitools (in the later seasons I am not sure anyone skips these). Even though they don’t often need many of the items on the tool, I would say you see people on that show using their Axe/Saw the most, then the Multitool (needle nose for fishing, knife blade for carving) the second most.

I can’t think of a better argument for a multitool than that.

Enter a Few Select Ones

The problem is that most multitools are not worth owning. I have tested a ton, and I got so frustrated with the standard lot that people talk about, that I had to branch out to find something I would actually want to use.

What I learned in testing over a dozen multitools is that the vast majority suck. And almost every single model leaves you wanting for something better. 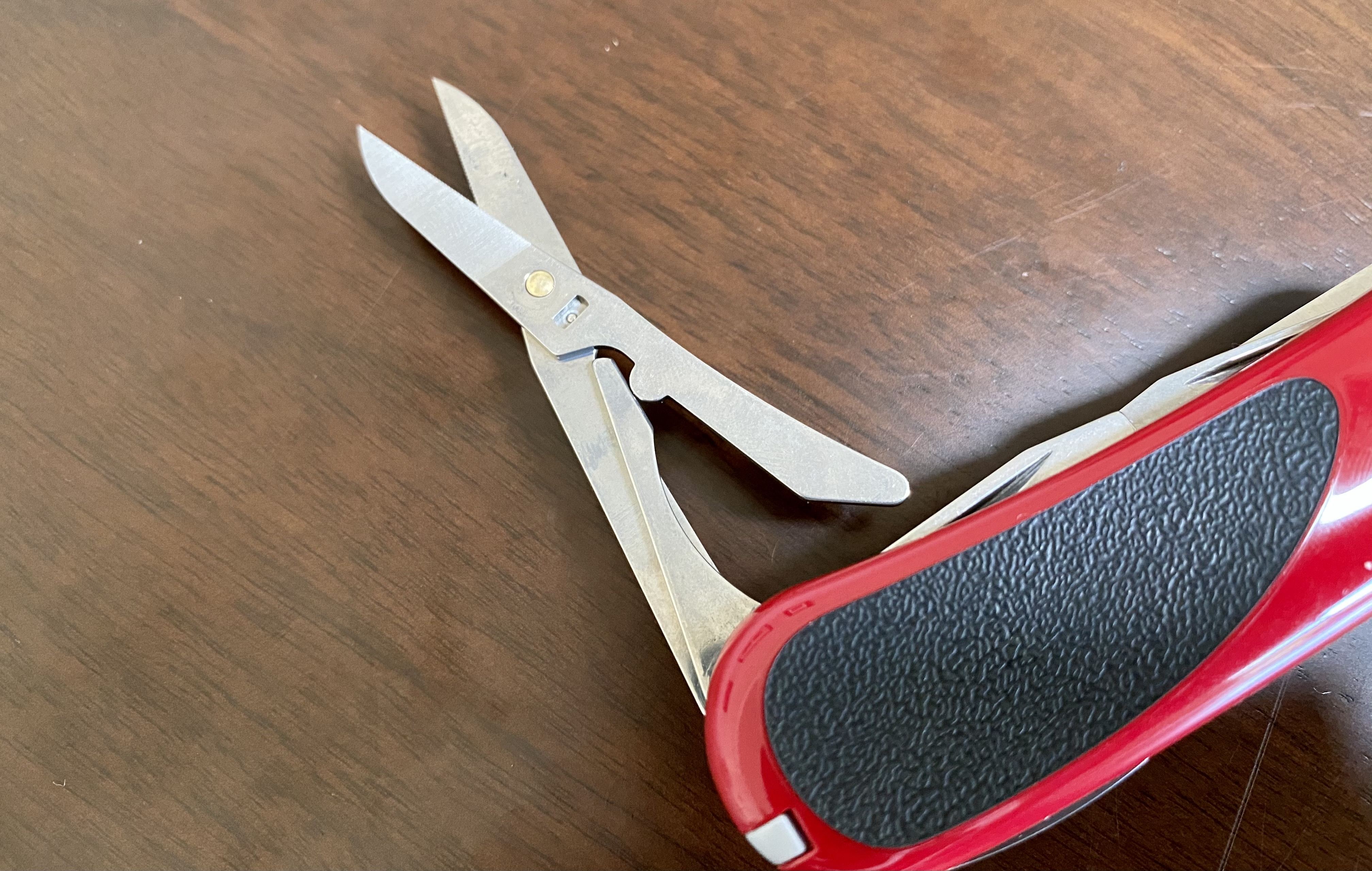 These are the best scissors of any multi-tool.

To test I did four things:

After all these tests, I can tell you a few things:

Ok, so after all this testing, here is what is good: 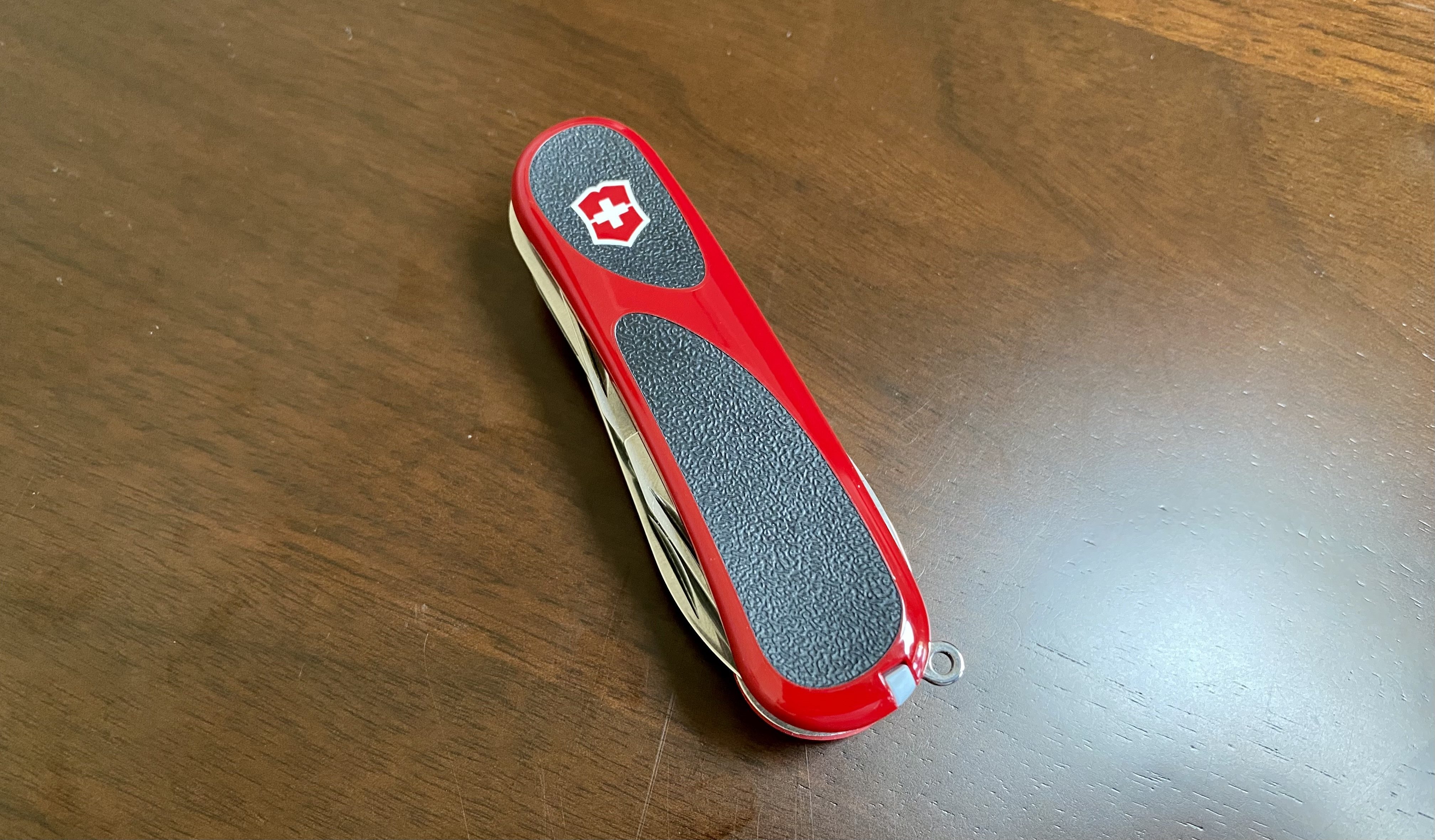 – Knife: standardish Swiss Army here, with a slightly modified shape. I would describe it as more teardrop in shape. I doubt this makes a huge difference, but it is slightly annoying to me. Is it the best steel? No. But it is easy to sharpen, is very durable and well I have one from like 28 years ago that still is very serviceable. More than all that, it has an excellent blade shape. And two blades! 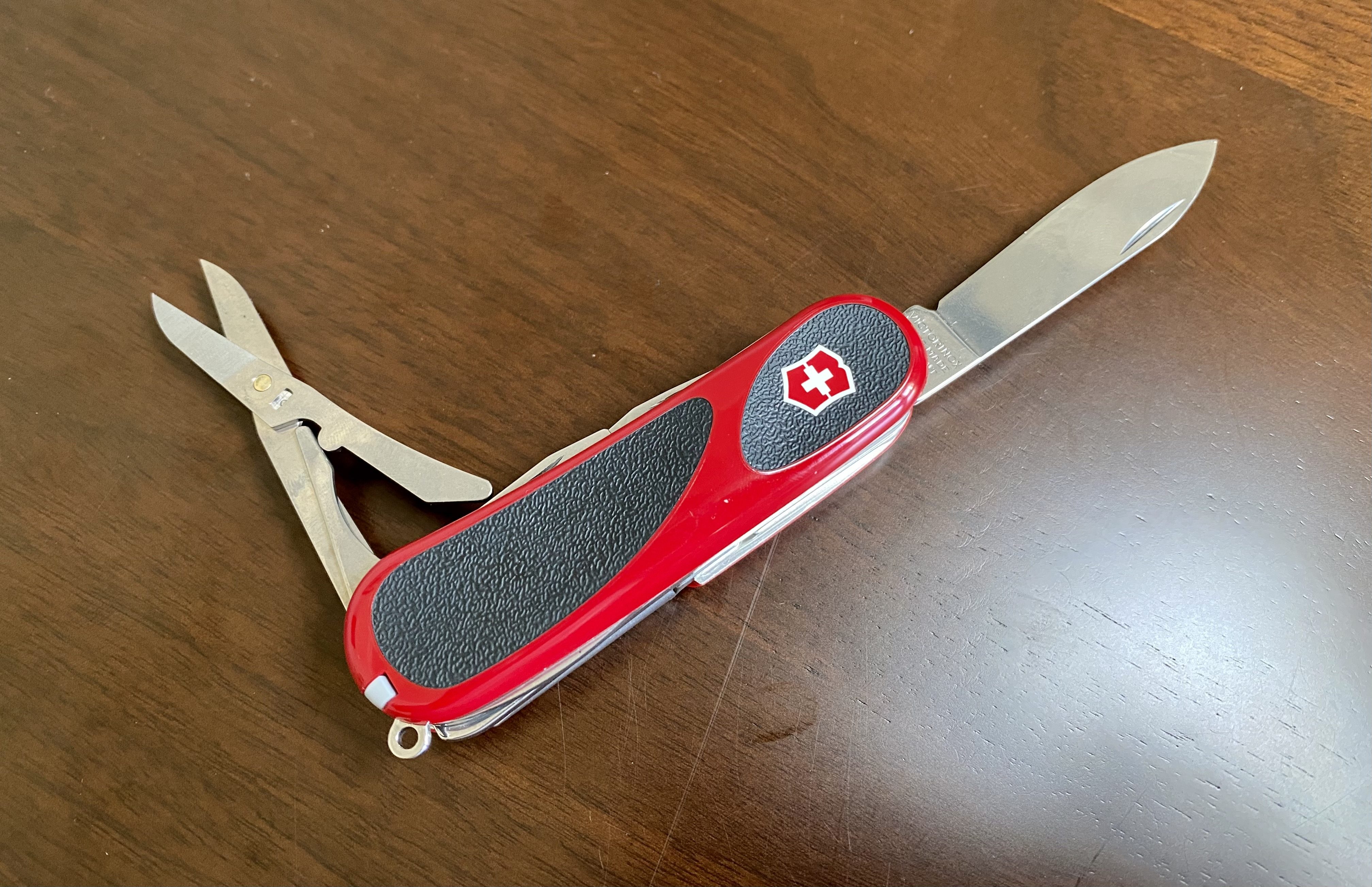 – Pliers: none.
– Scissors: these are not the standard Swiss Army scissors, they are some kind of compound upgraded magic. They are sweet. They also have a micro-serrated cut to the blades, which should make them cut better over a longer period of time. But I bet you can’t sharpen them.
– Philips: yesssss. This was just amazing to use. I drove the pan head screw flush, didn’t damage it, and my hand never felt any hot spots. 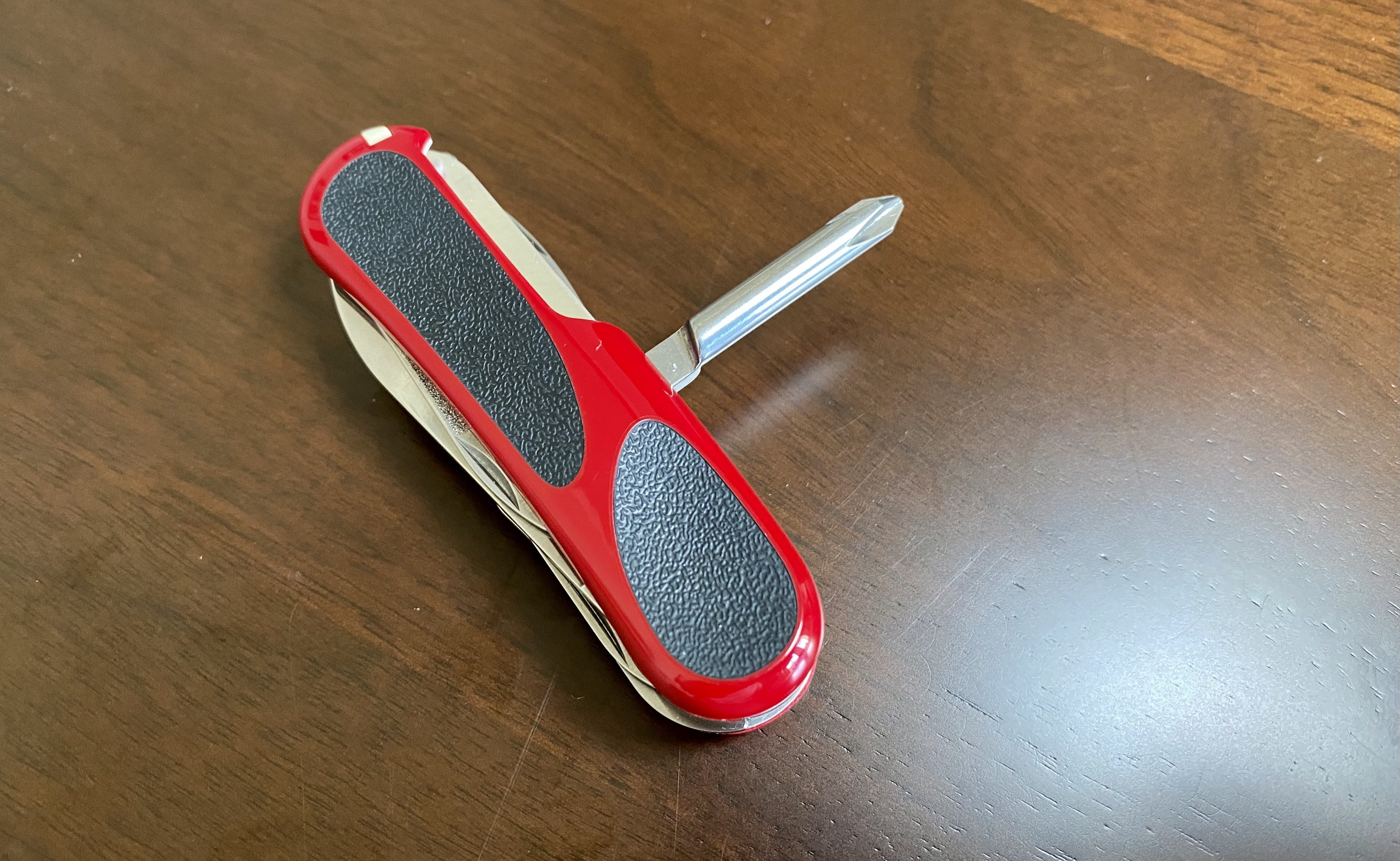 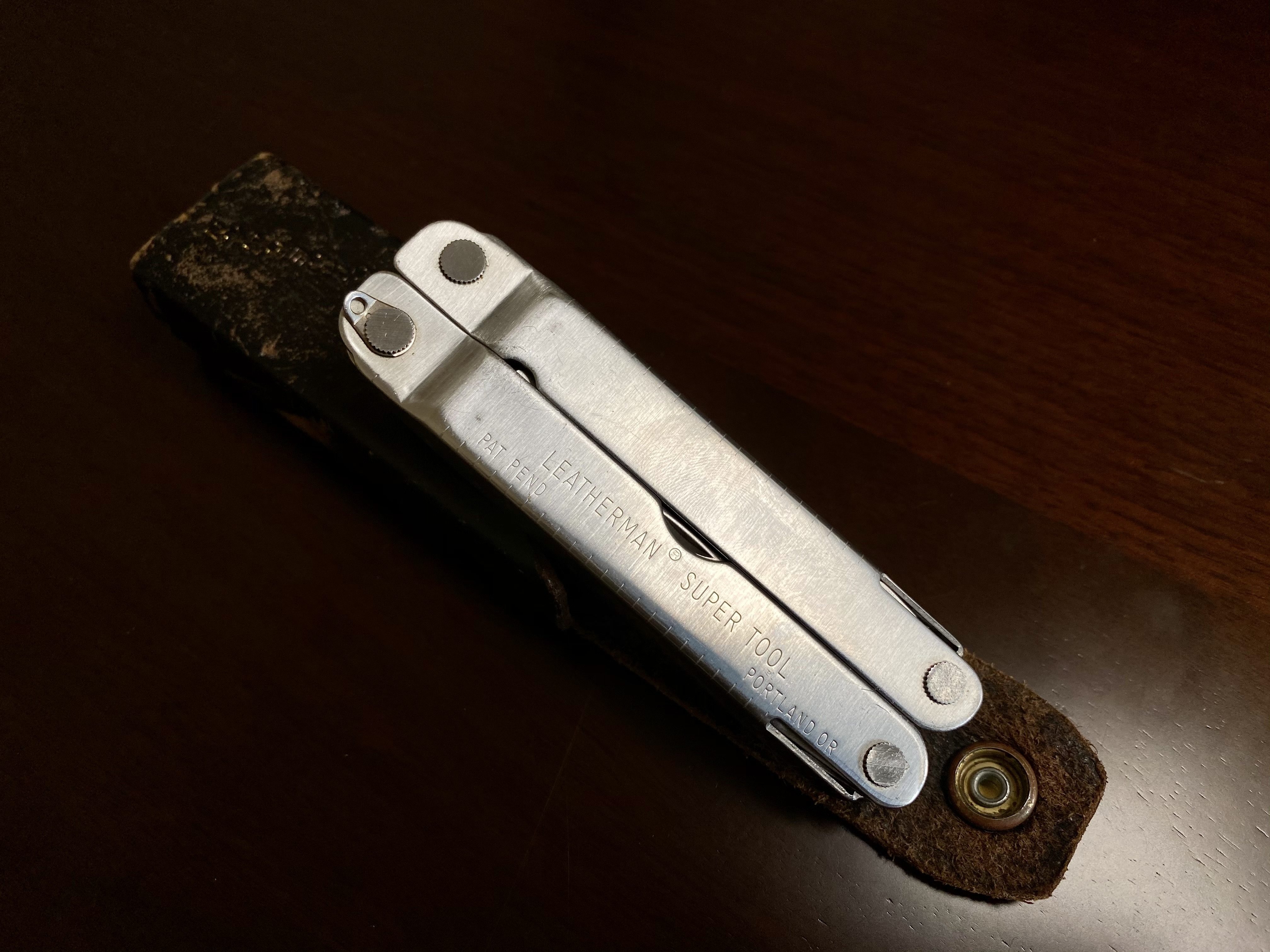 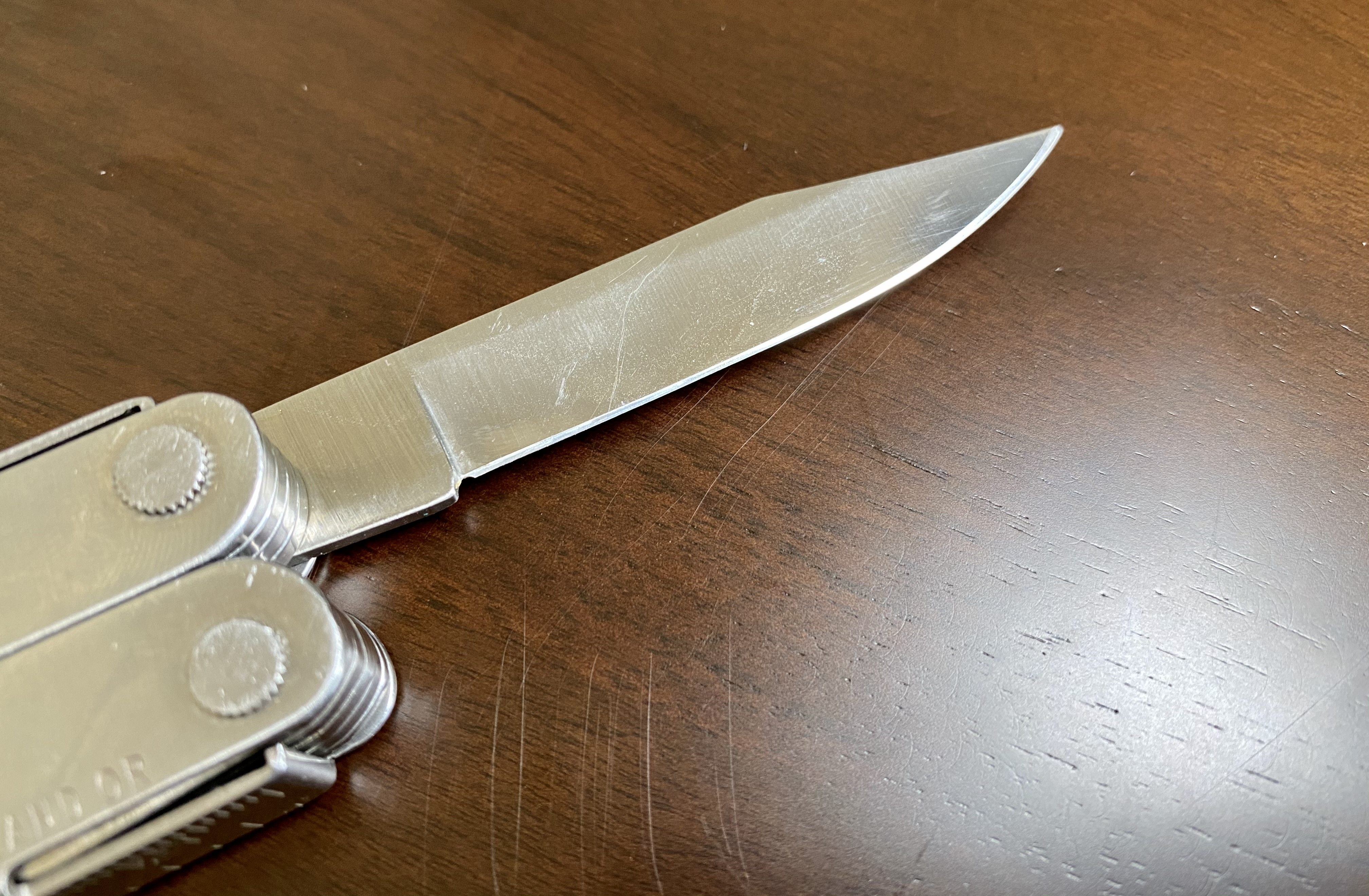 – Knife: solid, just a touch below the Swiss Army. Takes a knock down because of how clunky the tool makes it to use the knife. 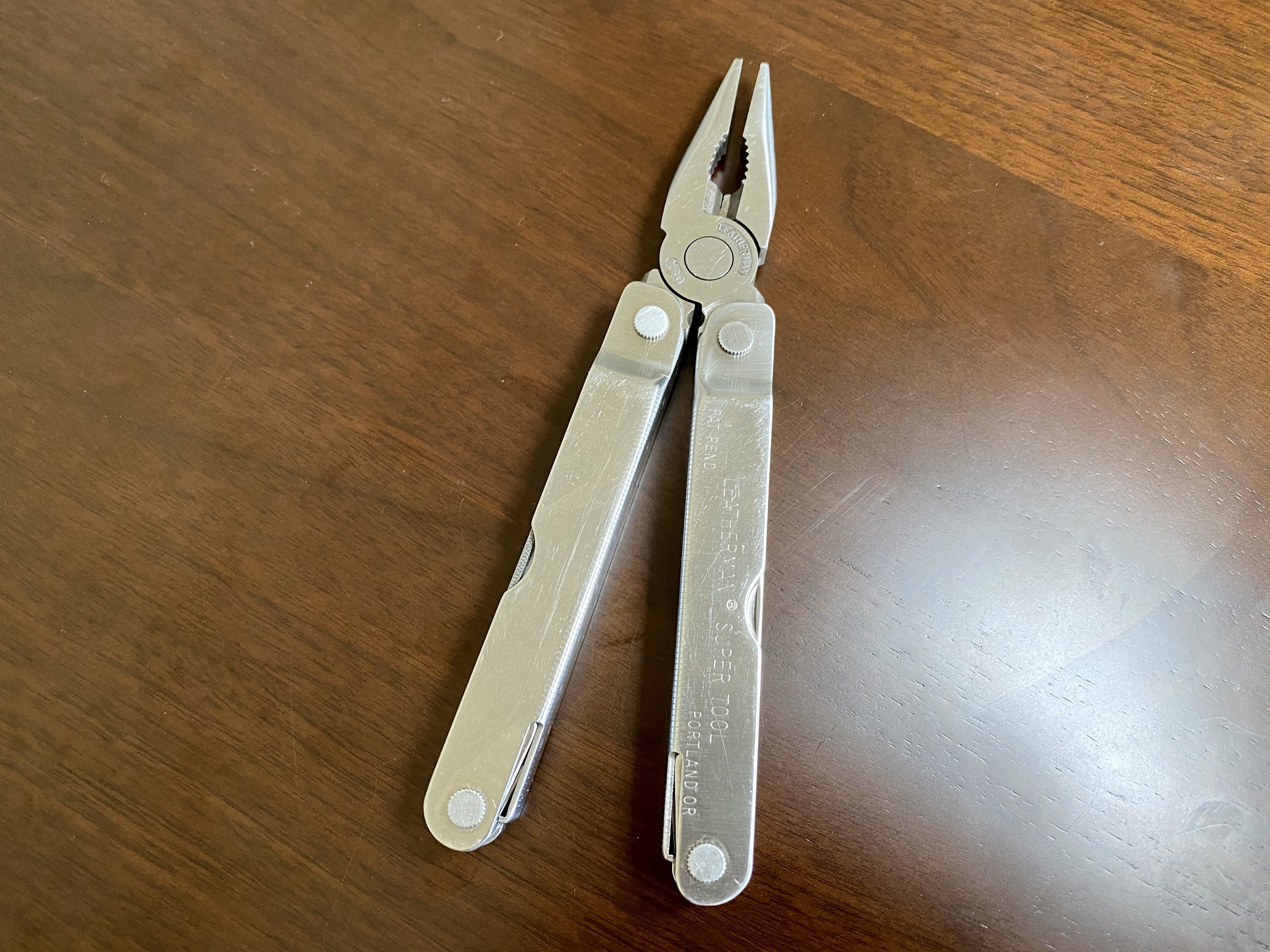 – Pliers: the best of the bunch. I am not really a person to often say “they don’t make them like they used”, but that feels like the case with this one. This was my first Leatherman, and it’s still the best one I have ever owned. The pliers are just amazing, and incredibly durable. I used this for years on a construction site too.
– Scissors: none, so sad. 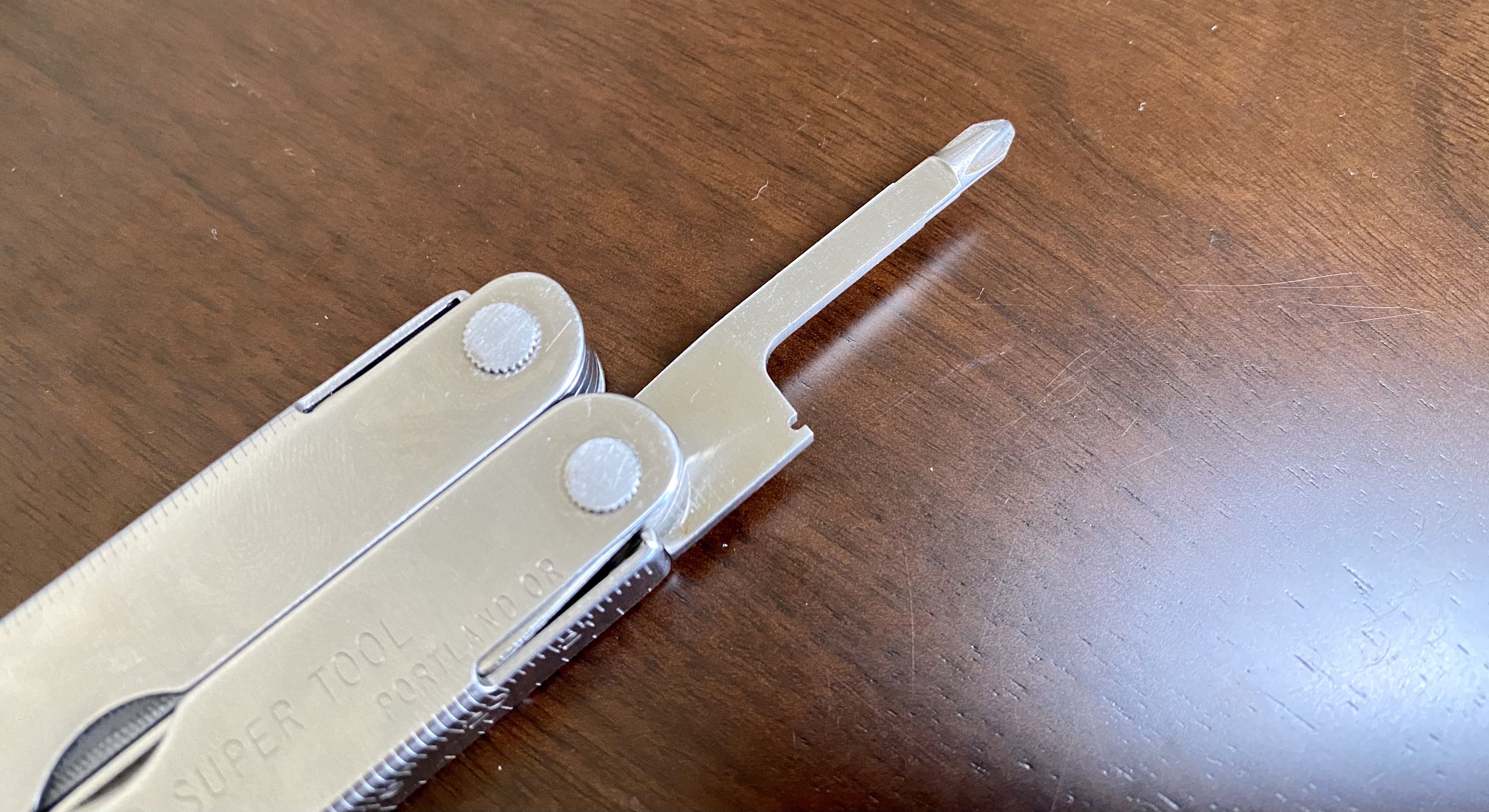 – Philips: unlike most new Leatherman tools, this one has a fully rounded philips head. It was not the most comfortable or most uncomfortable in the lot, but it did do a really good job not damaging the screw. 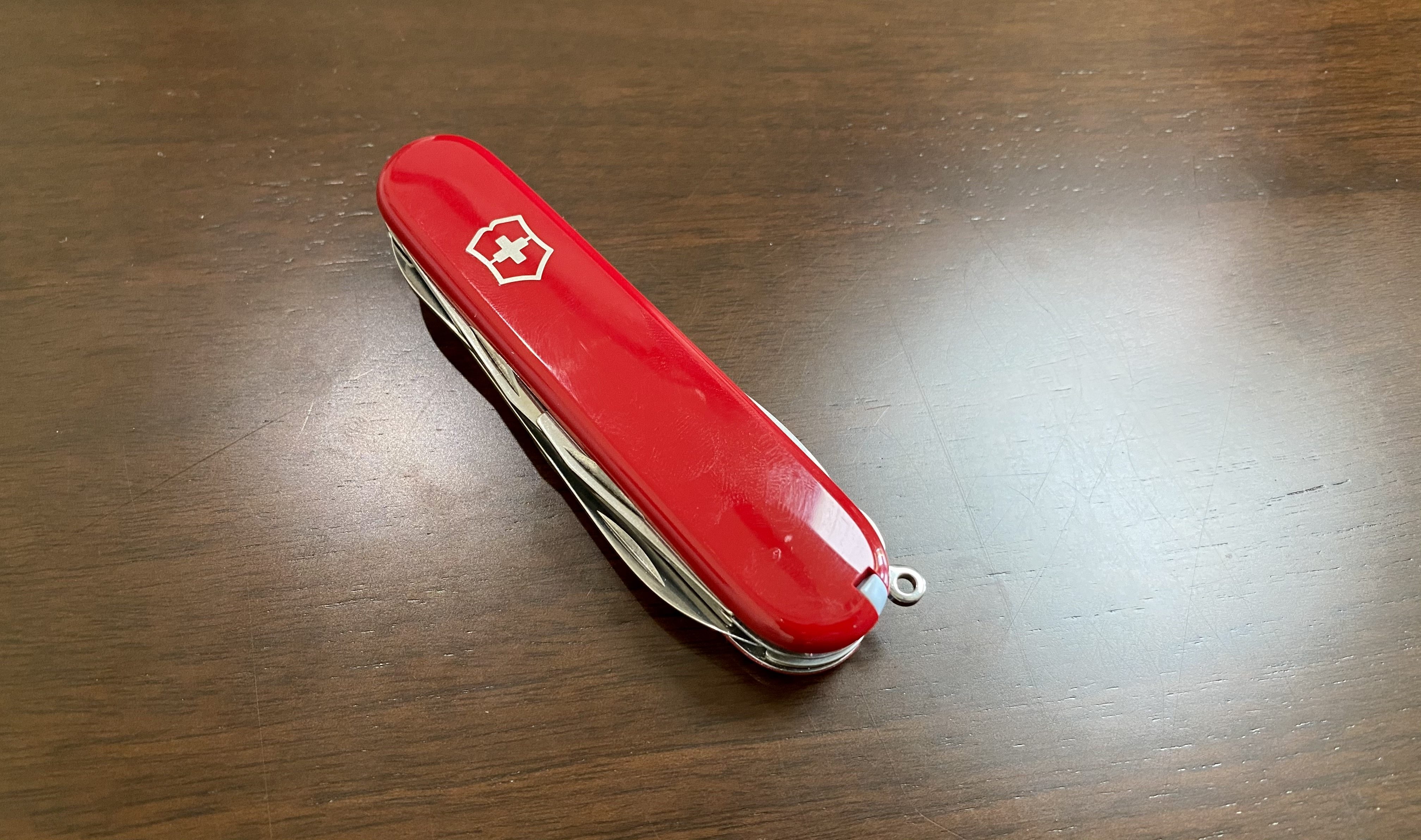 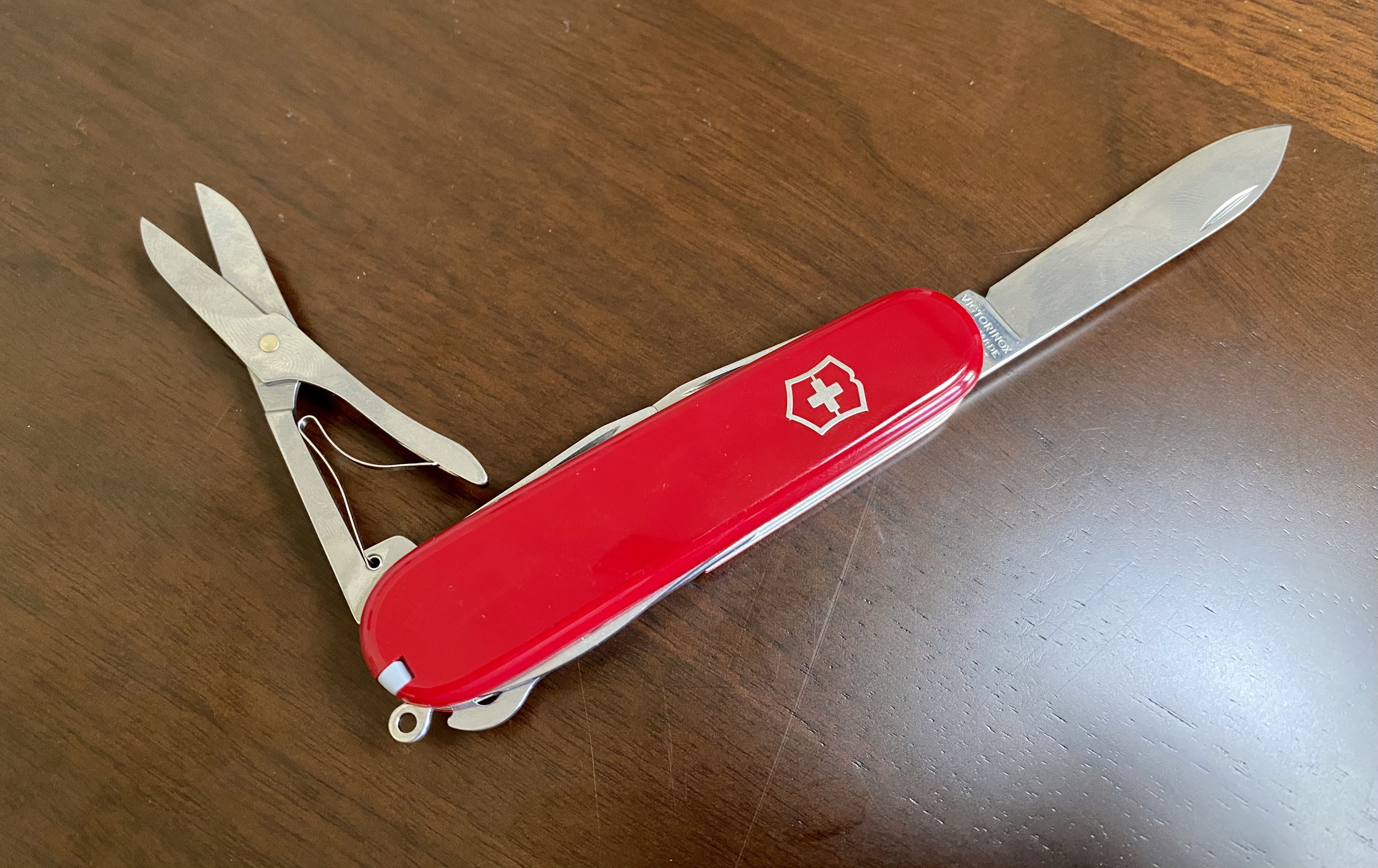 – Scissors: step down from the one at the top of the list, but still very good and useable. These are the classic Swiss Army scissors, and they get the job done. 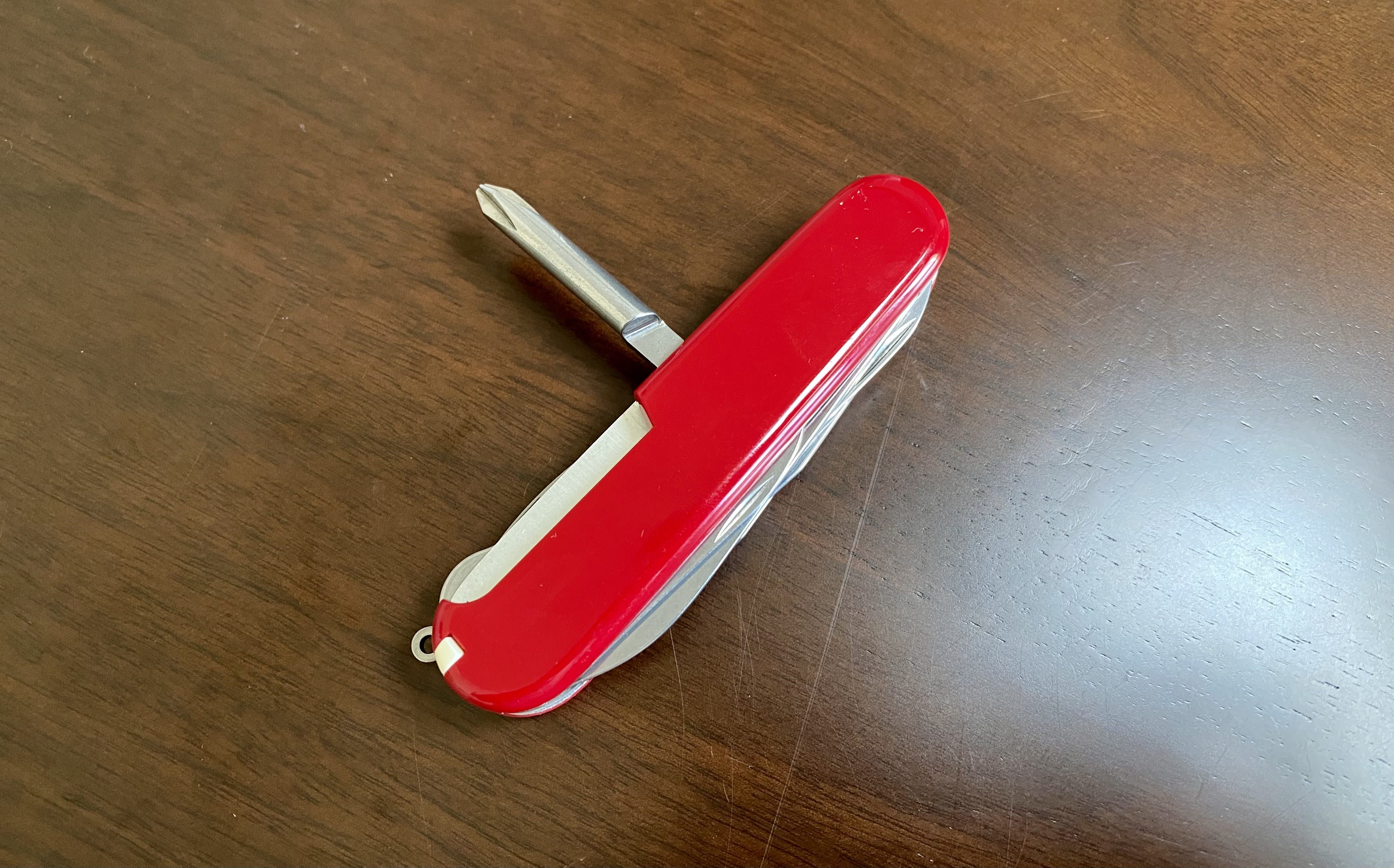 – Philips: same as above, but a little smaller of a tool makes it fit in my hand not as well. Those with a smaller hand might like this better. 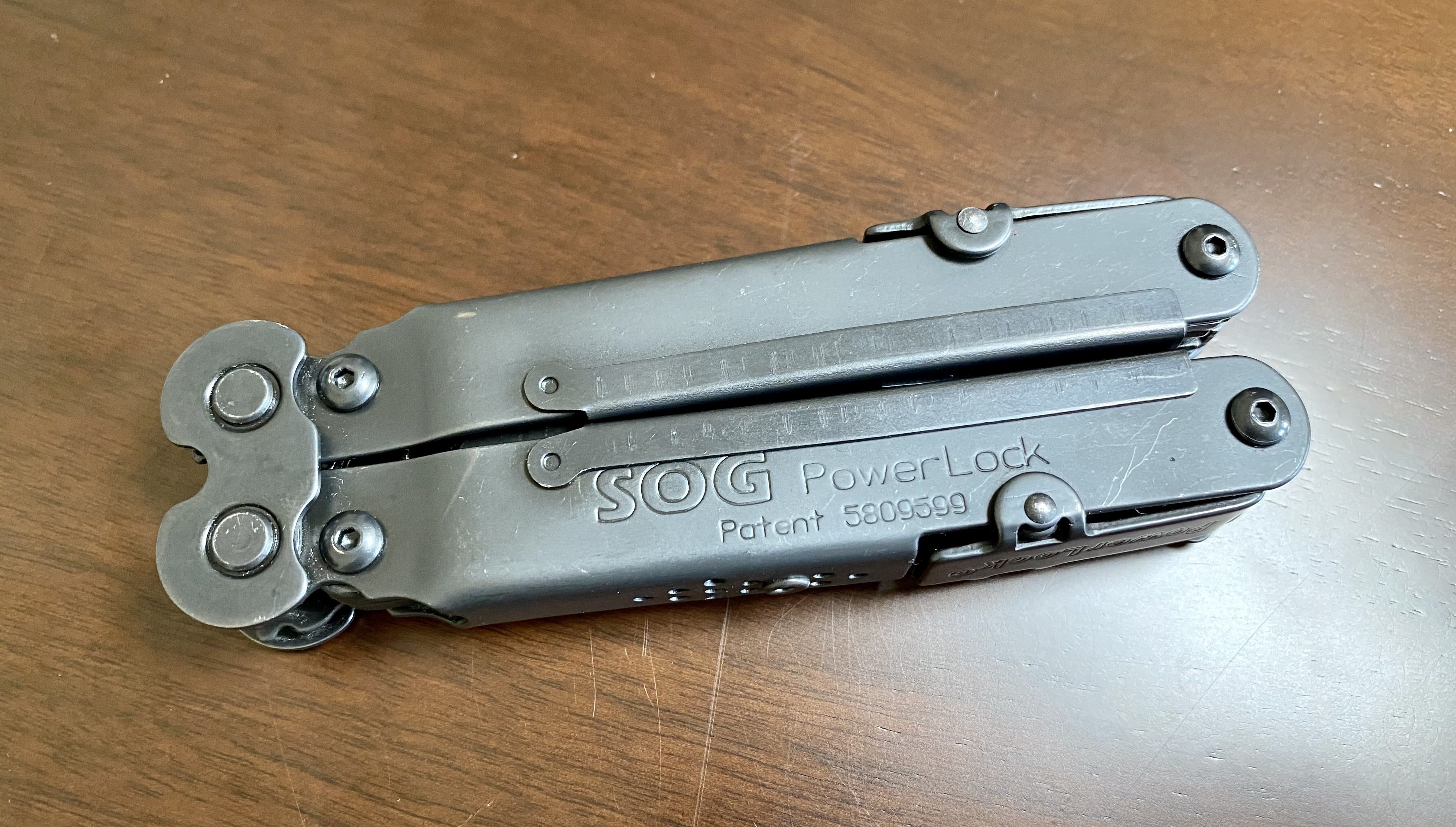 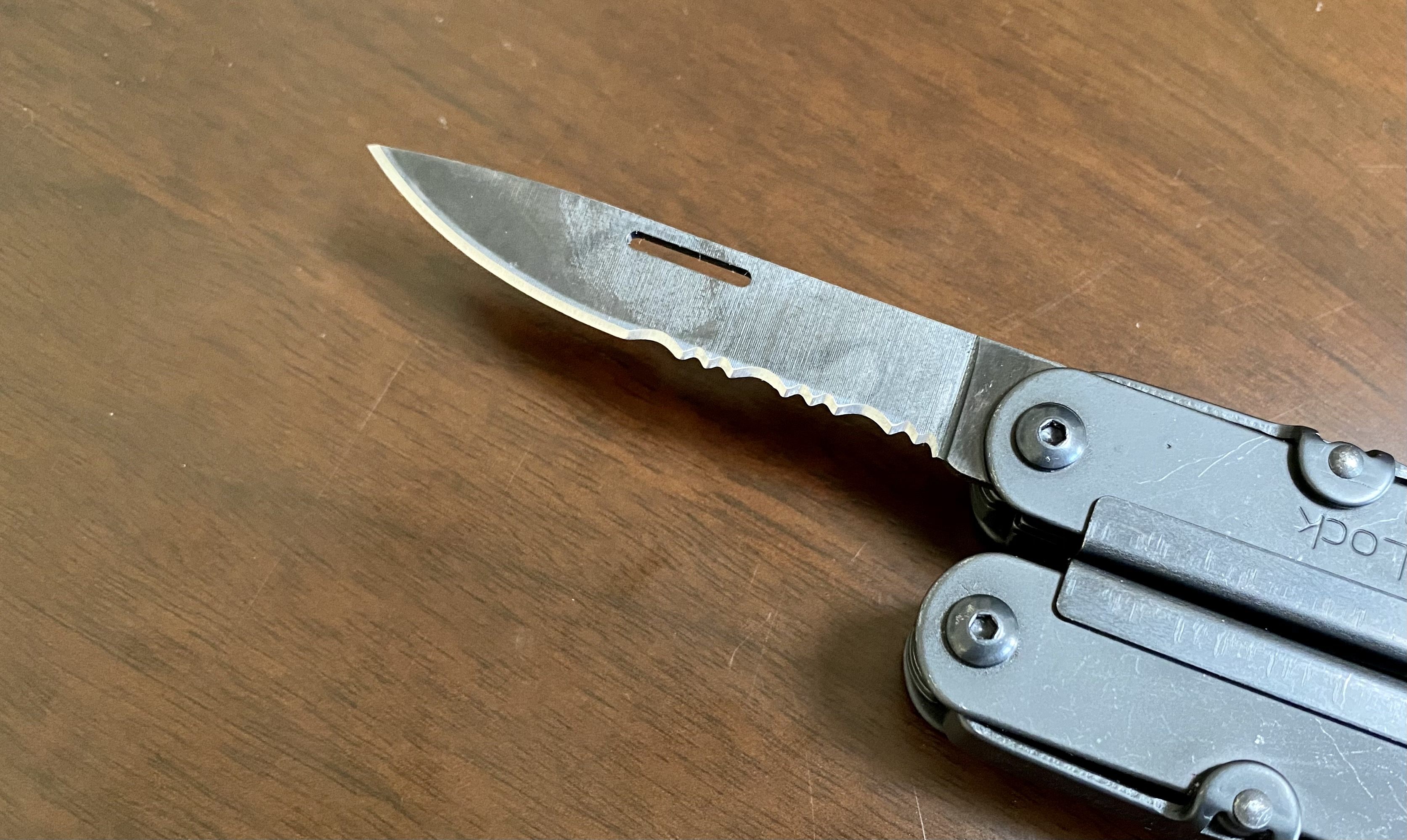 – Knife: It’s ok. The weakest tool on this is the knife, as it is partially serrated, but it does have a classic drop point design so it is at least useable. The bigger issue is that it only has a bevel on one side, which means it is by far a tool that can cut, more than it is a knife. Last resort if you will. 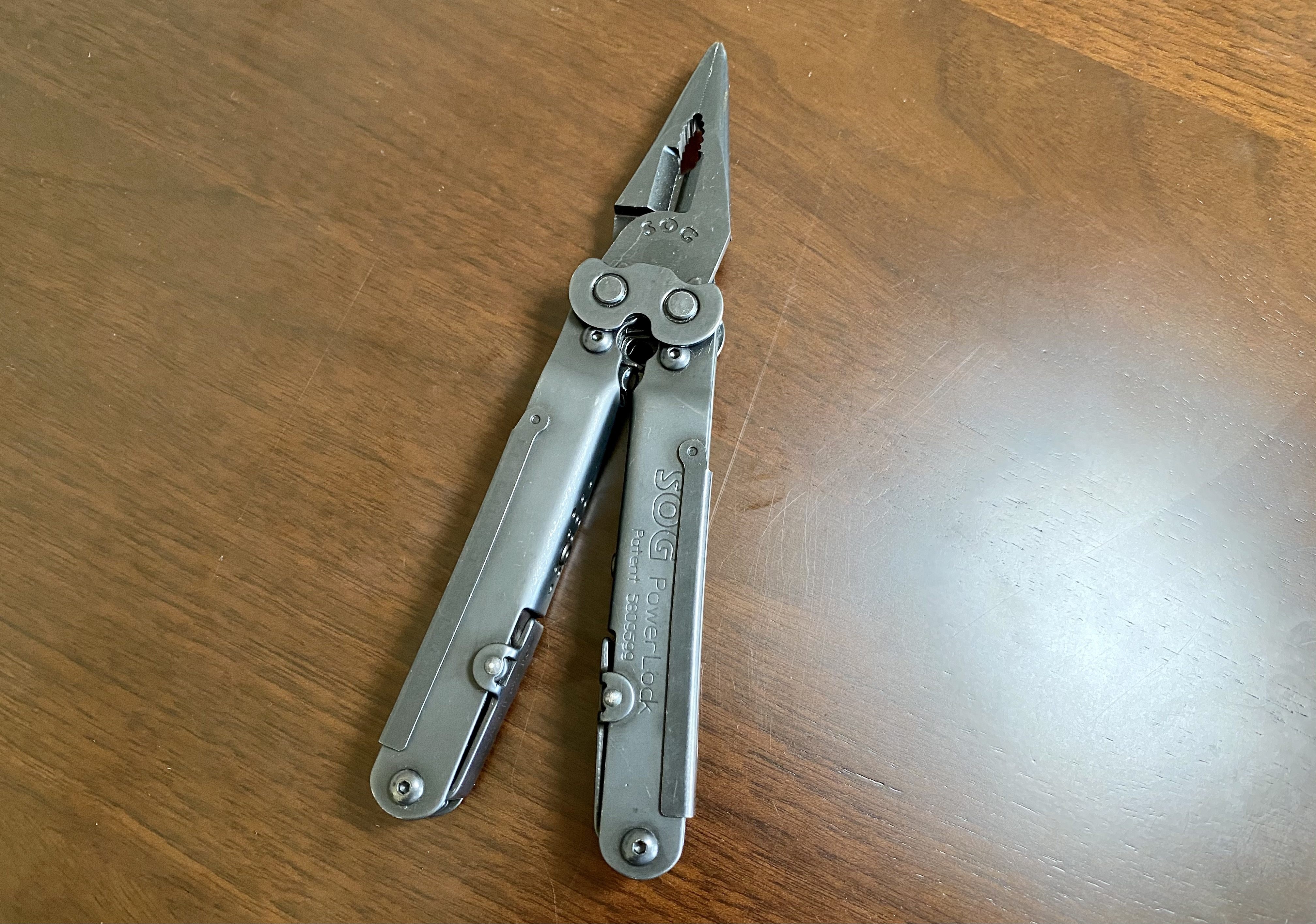 – Pliers: These are just a touch below that Super Tool above. They have a littler finer tip to them, and slightly more flex. That said they are better for working smaller items, and the compound leverage system is nothing to scoff at. These too have lasted me on many a construction sites.
– Scissors:none. 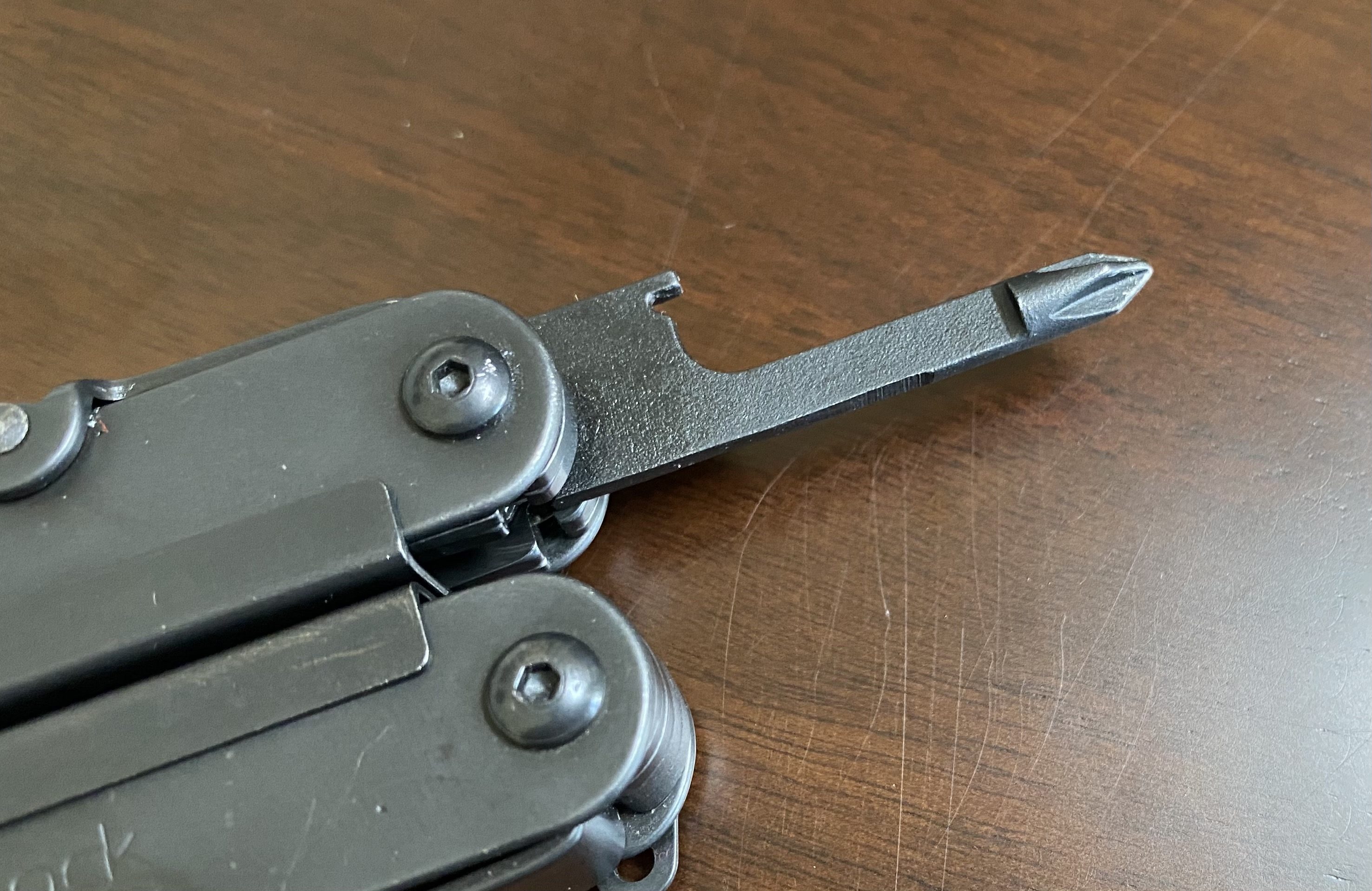 – Philips: the tool was a little cumbersome to use with a few hotspots on my hand from using it. But there was very little damage to the screw head and it was pretty fast to work. Additionally the longer neck on the driver will allow you to get to more screws easily.

Those are the four best, and honestly I would stick to one of those as there are too many trade offs with all the other models I tested. But flat out I will say: both GERBER multitools I tested made me want to toss them in the garbage by way of comparison to the others.

What To Buy: The Ones You Can Actually Buy 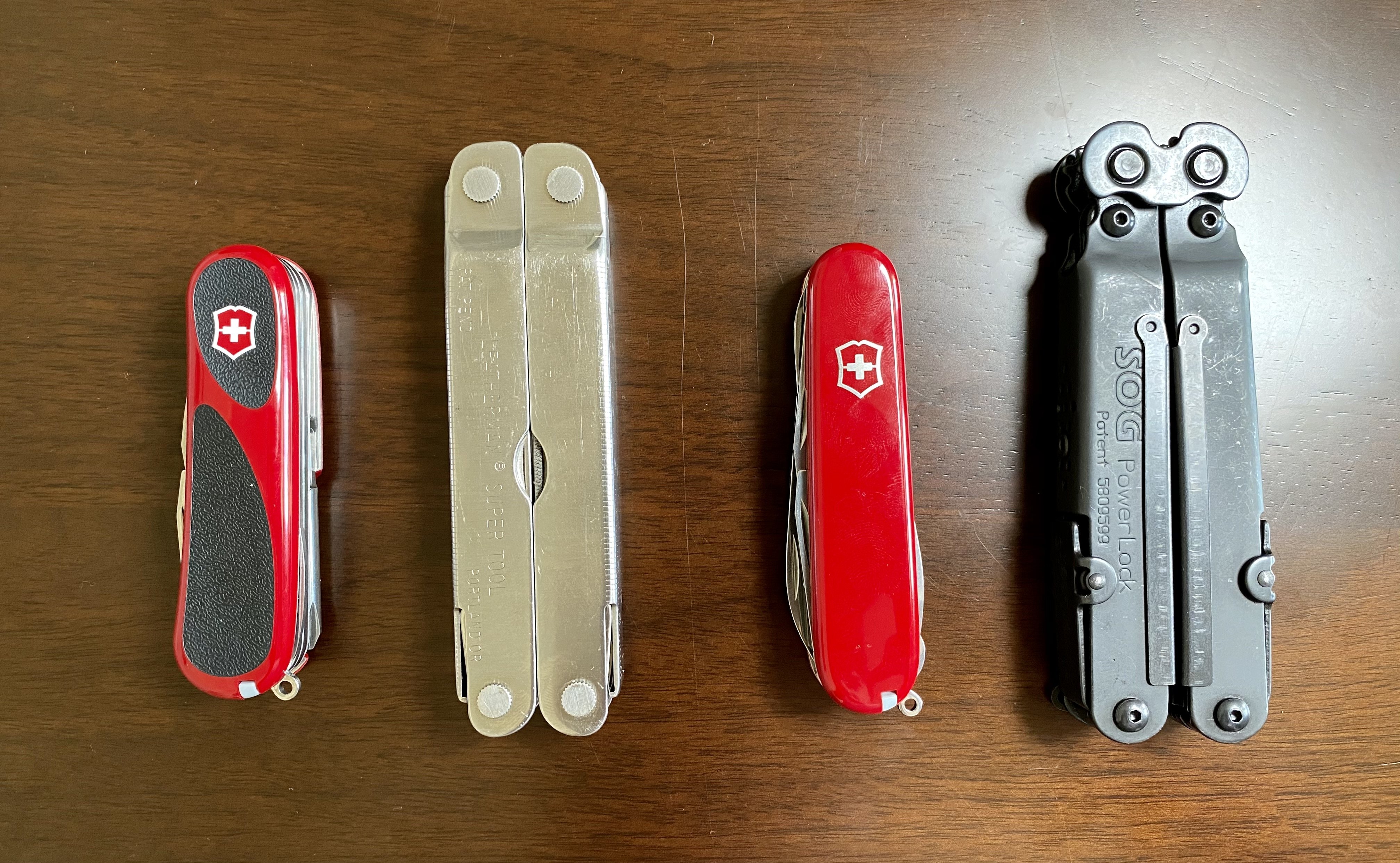 Here’s my recommendations in order of ranking:

After all my testing, here is my advice:

For me, that Evolution Grip 18 is astonishingly good. If I didn’t now have three models of Swiss Army knives with excellent screw drivers, I would be looking to get more of those. As it is, I shall keep my eye on the pricing of the Evolution Grip 18, because it is worth it.

I just don’t see the size of a pliers based multitool being worth the trade off at the end of it. Swiss Army has this figured out, and the size doesn’t limit the use of the tools, nor does it mean you can’t easily slip it in your pocket or bag. They are perfection for what they are.

I will keep carrying my pocket knife, but all my crap multitools are getting tossed in kits I hope to never need or use. The Swiss Army knives have all been promoted to my daily bags, where my two top pliers based multitools are being put in my emergency bug out bags.

So go and buy the Swiss Army knife you like best, they are cheap, effective, and pretty damned great.