One heck of a good looking knife, which does not even come close to living up to its looks.

Benchmade has been on a roll with the Bugout lineup, and something which has become ever popular the last couple of years is the Benchmade Osborne family of knives. People seem to love them, but I’ve always steered clear as they are higher priced (start at $200) and they have a rather large blade for an everyday carry knife, coming in at 3.4” long. The combination of both, making it a losing proposition for me. 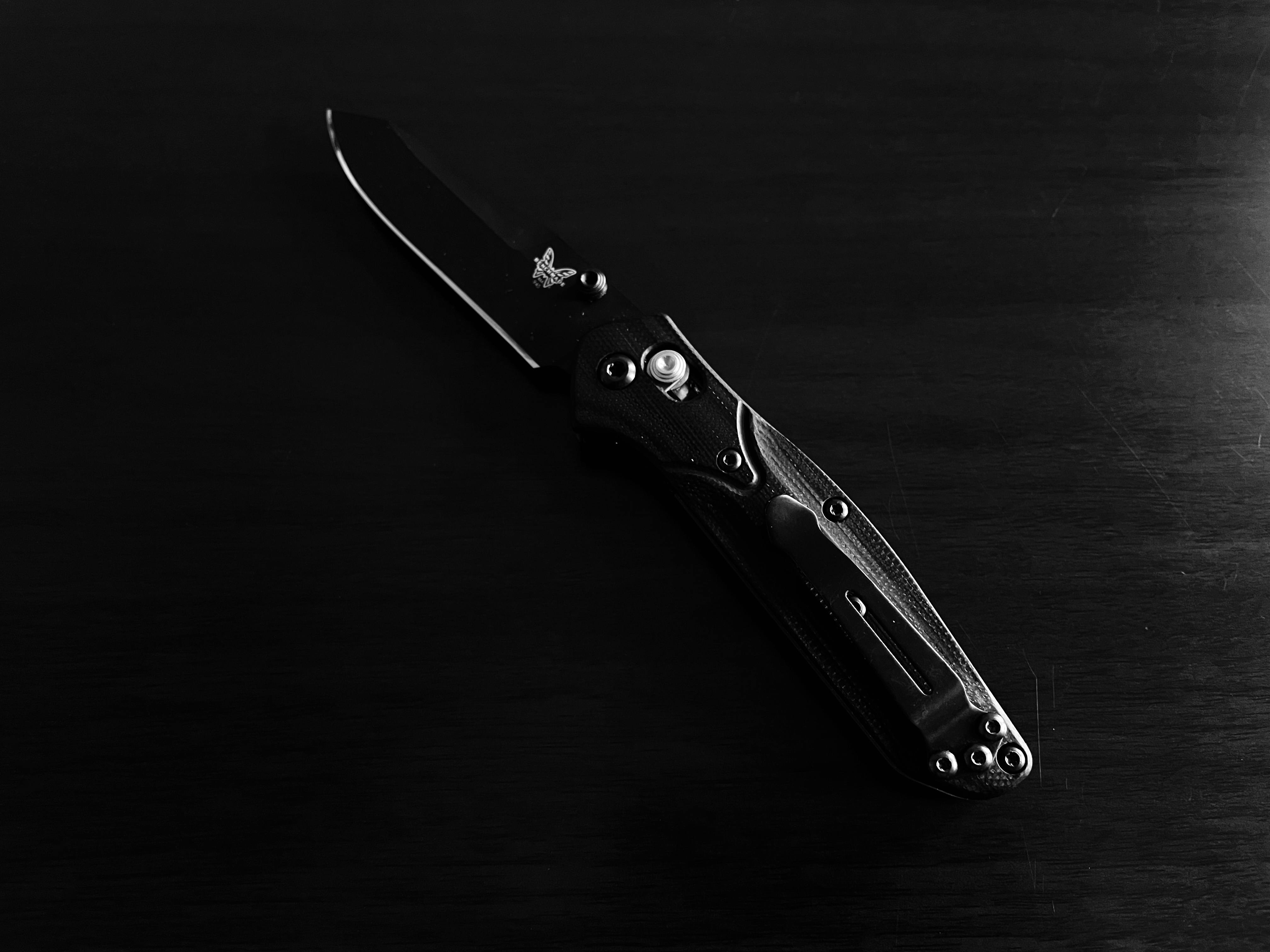 So when Benchmade announced the Mini Osborne (945BK-1) I placed my pre-order and waited. I have liked almost every ‘mini’ model Benchmade has made and the Osborne, being as popular as it is, seemed like a good gamble.

I’ve had the knife for a while now, putting it through its paces, and while it is a very good knife, it is also decently underwhelming. Allow me to explain.

Let’s start with the hallmark of this knife, the blade. It is what Benchmade refers to as a ‘plain reverse tanto’. Which is really meaningless. Here’s what it looks like: 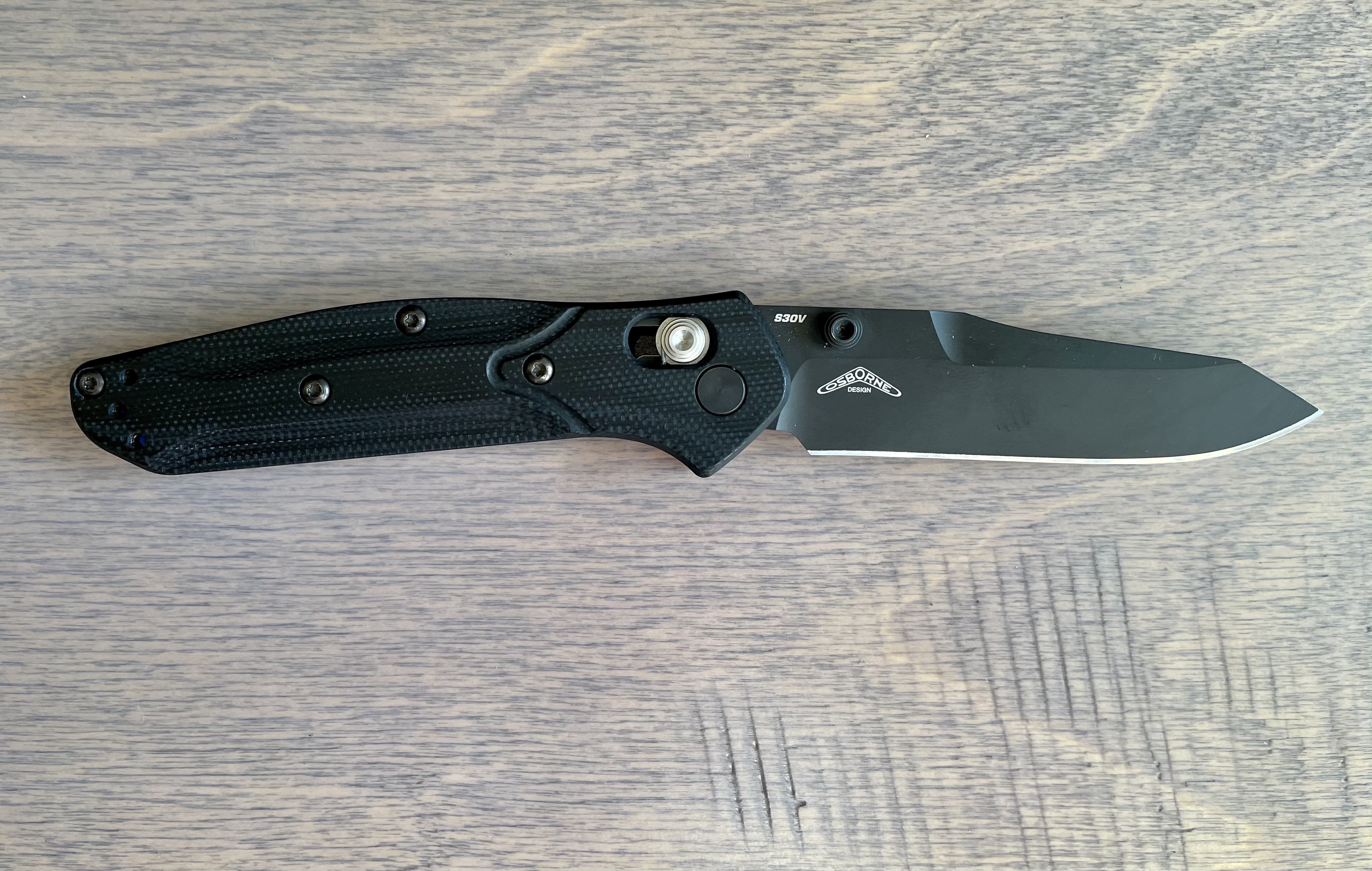 The big thing about this is that the blade has a very large flat area to work with, and fast curve to a decent point. All in all a fairly well laid out blade shape for many tasks. It is certainly cool looking, but (as I will talk about more in a bit) kind of not great to use. 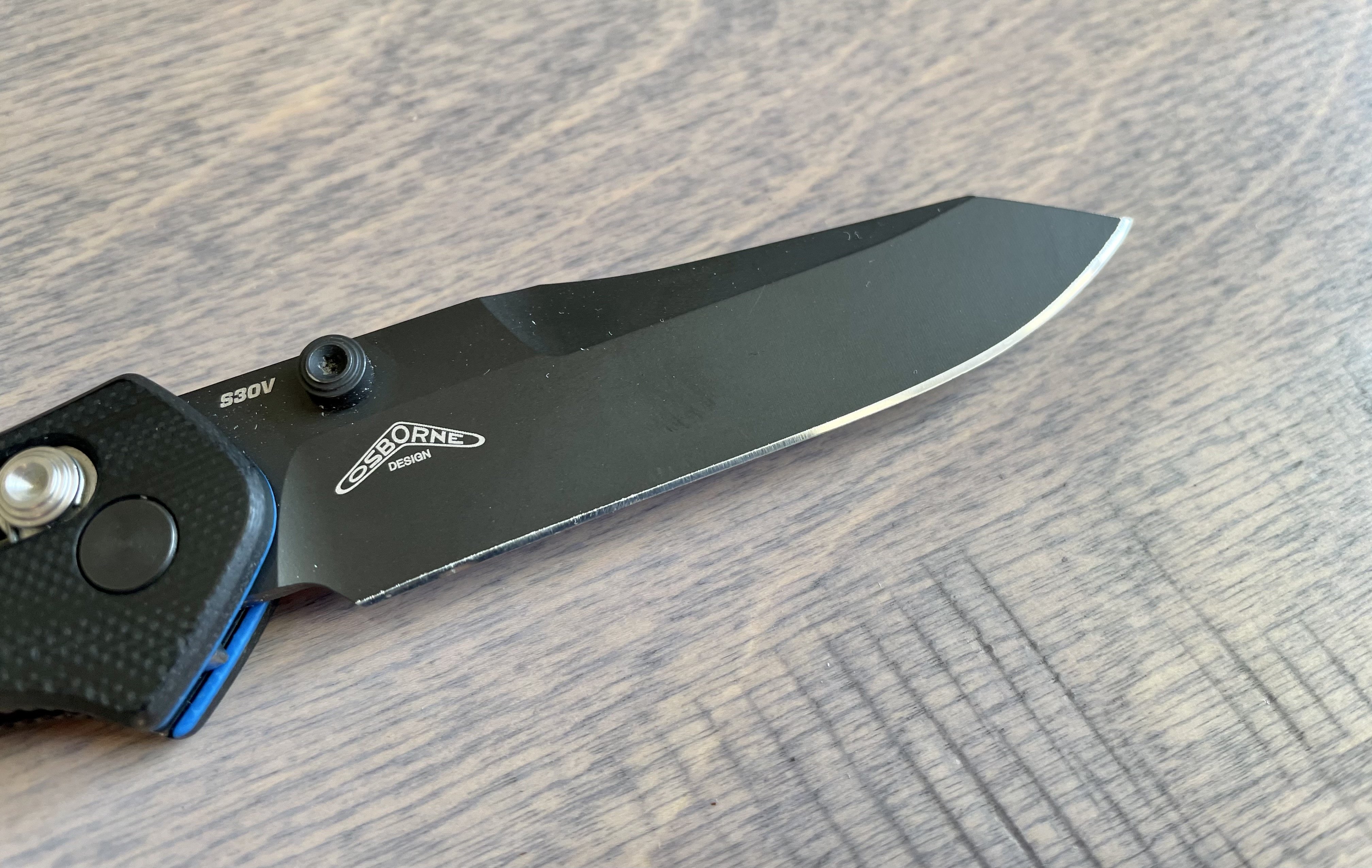 Lastly, the blade is made from Benchmade’s now stubborn refusal to leave behind, in S30V. And while I think Benchmade makes an excellent S30V, that works as an argument for knives sitting around the $130 mark (though many would argue that is still priced too high for that steel), but since this knife starts at $205, you are paying an awful lot of pretty low grade steel. Most knives at that price point will at least have something closer to M390 or better. Is S30V bad steel? No. Is it worth paying this much money for: not unless everything else is executed perfectly.

The blade, then, is a lot of ‘meh, really?’ for me. I cannot say it is bad, because it is not, but I can also say there was no wow for me. And look at the back of the blade from the top down, it goes: thick to thin to thick at the back edge of the blade. Weird, right? I don’t think this matters practically, but visually it drives me nuts. It makes the knife tip look heavy, when really it isn’t.

Alright moving on to the handle. Here we have a G10 handle, black on the outside with bright blue lining it. It’s not very tall, has nice contouring and is decently thick. Overall this handle works really well. 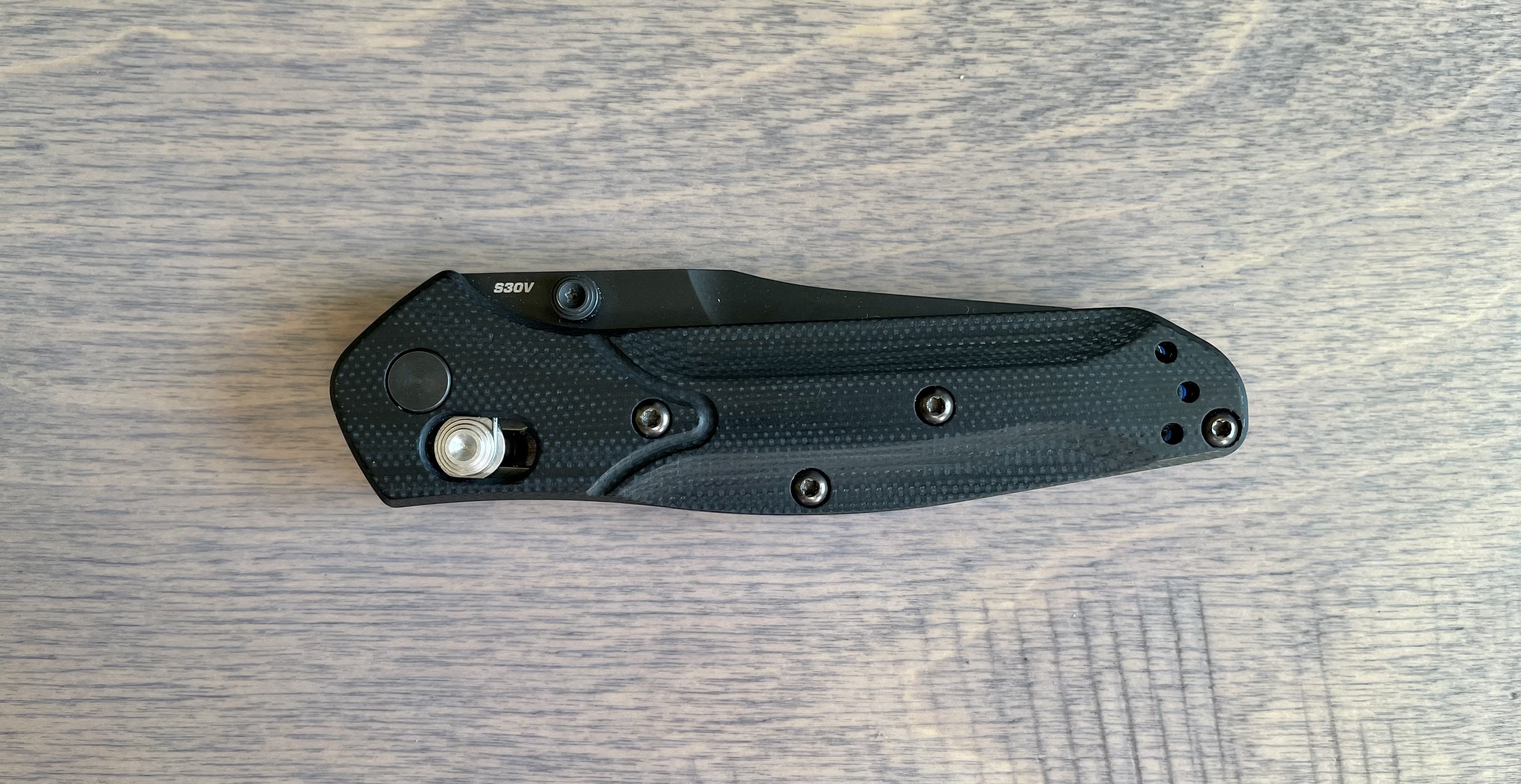 It feels incredibly solid, with no real flex in it. The lack of height is offset well by the thickness, providing a reassuring grip overall. I really like the handle, it’s quite nice.

Ok, this is what matters: what’s it like to use and carry? It’s a whole lot of “I have better.” While the size is excellent and the overall ergonomics of the knife are decent, it can be frustrating.

None of this has to do with the action. It has the typical Benchmade Axis lock and thumb opening, which after broken in is fast, snappy, and locks up well. No, that is all done extremely well.

But the first issue is the pocket clip. The stock one is simply not great. I ordered an aftermarket clip from LynchNW, and it didn’t really help the situation. The only way I was able to resolve this is without a pocket clip all together. This does make snapping the knife open a little riskier since your finger tips have less to secure the handle on, but it makes the entire knife feel better in hand and pocket.

Ok, so remove the pocket clip, and off we go.

That brings us to the next issue, the primary use for the vast majority of pocket knives in the world today: how well does it destroy Amazon boxes? For the Mini Osborne, I do not like slicing open packages with it. This knife does poorly at slicing boxes compared to other knives, and the tip is so weirdly shaped that locating the center on a tape seam to run the blade down it is not easy and the blade often jumps right out of the track. Leading to the blade feeling dull, when in fact it is razor sharp.

In almost every situation where I use a knife, this Mini Osborne is not as good as the other options I have on hand. I really hate saying that, because I am a huge fan of Benchmade and I love the way this knife looks. But I can’t find a use for this bade shape and this knife.

The only time I was impressed and happy with this knife was when I was hanging up some string lights and cutting/finagling zip ties — it worked very well for that as the beefy blade and stout handle gave confidence in cutting through tough plastic. But I can’t say that is a big enough part of my life that it would weigh on my love of this knife. Perhaps for hard use tasks, this knife will be better suited, but then wouldn’t you want the larger version? I would.

I am just not wowed. I like it, because it looks killer. But at almost twice the price of a mini Bugout, it’s about half as good. It’s not as good as a Proper either, and I think the entire package is a bit of a let down.

If you like the full sized Osborne, then this is something I bet you will like too. If your applications are more tactical, or hard construction use, this might be better than some of the more delicate blades I review here. But, if you spend most days trying to get into boxes or blister packages — this is not the knife you want.

And because of all of that, I do not recommend this knife, you are far better off with a Mini Bugout.

Now, what in the heck should I do with this…