How to keep your knives sharp for a really long time, without breaking the bank.

For quite some time, I have advocated either waterstones, or the Spyderco Sharpmaker for sharpening your knives. It was the exact setup I used, and it was only recently that I realized there was something much better which is still cost effective out there. This is that story…

Watching this video, I really got thinking about whether I was getting a good edge on my knives or not — I suspected not. In the video a bunch of sharpeners are tested to see how sharp they are right after sharpening and how well each retains the edge after a very consistent amount of wear is put on each blade.

The video confirmed something which had been bothering me: when I sharpen with a water stone, or use a factory edge knife the sharpness lasts much longer than when I used the Spyderco Sharpmaker. The video has the evidence to back that up: that while the Sharpmaker gets edges very sharp, those edges dull much faster. Whereas the videos shows that the water stone and the Wicked Edge has edges which last substantially longer than any other method.

I have been referring to this as a two fold matrix:

You want the first to be long, and the second to be low effort. That’s effectively what you get with water stones and guided sharpeners. Not what you get from the Spyderco. Hmm.

So what gives? How in the world do two things get an edge sharp, but one of those edges doesn’t last as long as the other edge. This was driving me insane, I hated it. My theory is that the Spyderco is simply putting a micro bevel on the blade which then dulls quickly. But whatever, I am more of a ‘forget the details, get the results’ type of guy.

So I tossed away the Spyderco — and I know I have been recommending it for a while so apologies, I am in the same boat. I had to get to the bottom of this and move on from the quick and easier sharpener to something that was still quick and easy, but also something which lasted. The change for me has been drastic — for the better.

Let’s start with my Chris Reeves Small Sebenza 21 — it was dull as hell when I started this process and add to that I chipped the very tip off a long time ago the blade was a trainwreck. So I set out sharpening on water stones and because those require constant practice to be good, well I failed to get the razor sharp edge I wanted. I don’t use those stones enough (nor have the time to use them enough) and thus I can’t get a good consistent edge. But I need a good clean edge, I want one, so I evaluated a ton of the guided systems and the top three I summarize as thus:

There is no doubt in my mind that the Wicked Edge system is the best out there (staying away from the powered sharpening systems). There’s also no way I am spending that amount of money on the Wicked Edge — and you know when I have trouble justifying it, yeah… so I bought the Edge Pro Apex 4 (the ‘4’ just means it comes with all the things).

Listen, I am about to tell you why the Edge Pro Apex is a game changer. Absurdly good, so if you want to save $300 get out now and go get that Lansky.

Ok, so here’s my really fucked up Chris Reeves Small Sebenza 21 knife edge before sharpening with the Edge Pro Apex: 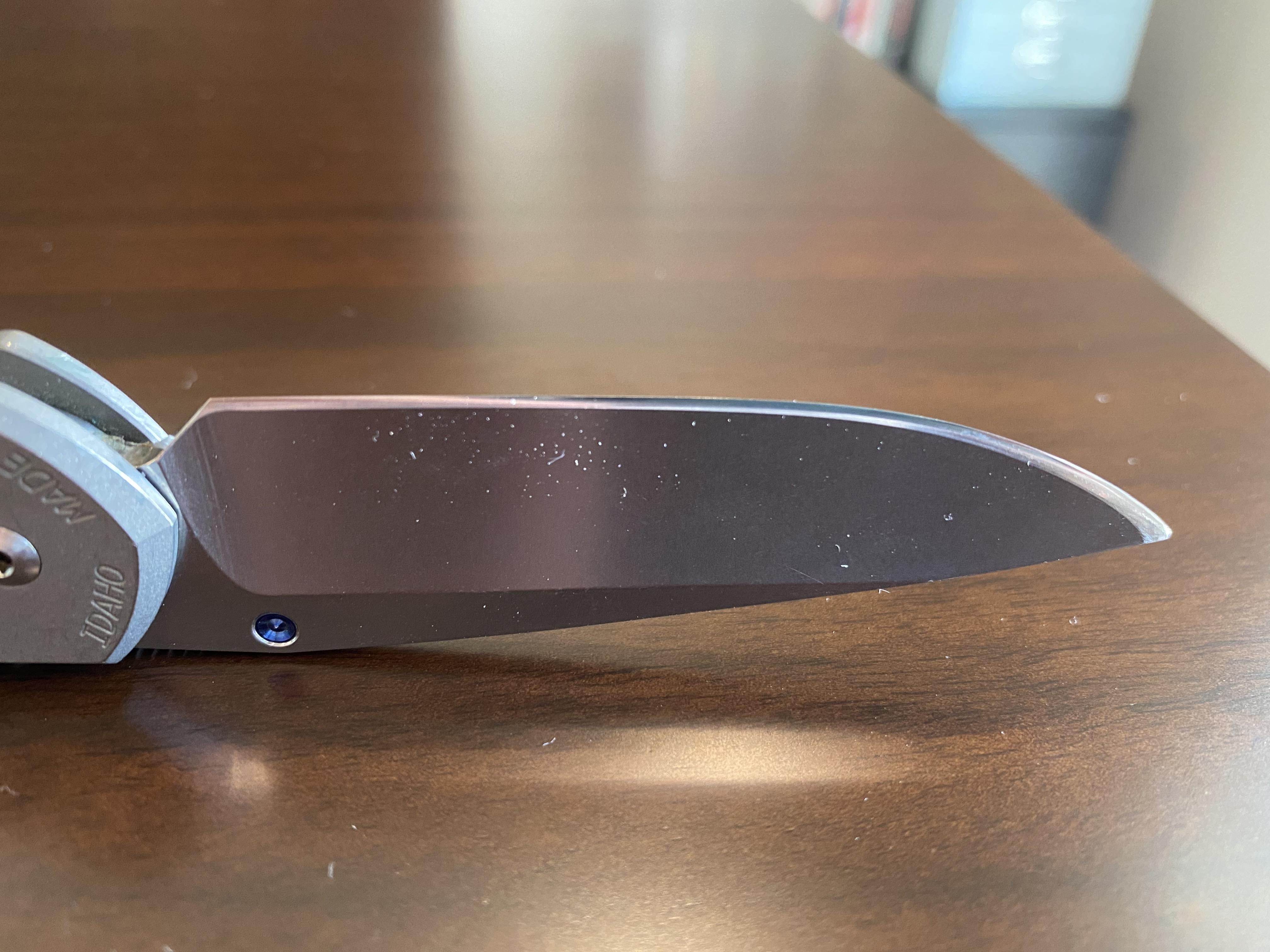 Keep in mind, that’s a $350 knife and it is really messed up. Like to the point where I could not get it sharp by hand, and the entire thing needed to be reprofiled. Typically you would not start a new sharpener on your most expensive knife, but it was pretty messed up and I was considering sending it in to have the blade replaced. I still might, but I wanted to see what this would do for it. The bevel on the blade had become very convex, the tip had been poorly reprofiled by me, and generally it was a really inconsistent angle across the blade.

However, because this was my first go, it’s not nearly as good as my later attempts to get a sharp edge, even on badly profiled knives. Even still, it’s saved the knife enough for it to be something silly (I’ll explain in a moment).

Here’s the finished state for the Sebenza:

As I have been using the Apex, I have fallen in love with it. It is fast and easy to use. I have gotten to the point where I am starting to really put some wear on the stones themselves. All of my newer knives I have managed to maintain the factory angle for the most part but add a mirror finish to each blade.

In short, this sharpener is amazing, I know the Wicked Edge will out perform it, but goodness I cannot imagine how anything could. I love this sharpener.

Argument for the Wicked Edge. One thing I have noticed is the trend to make the tip of most blades a little fatter on the bevel. Like how the bevel is wider on the Sebenza. To combat that, Edge Pro sells a ‘small blade attachment’ which is worth the money and what I use most of the time. I think the Sebenza would look better if I had that when I sharpened it.

My guess is that the Wicked Edge system would do a better job keeping that from happening. But really the Worksharp or the Tormec is what you would need to really get closer to factor bevels. To me, my Sebenza not withstanding, it’s mostly a cosmetic thing.

Now, mirror edges are cool and all, but what about edge retention? After all that is what led me down this rabbit hole.

That’s the insane thing here, once I put an edge on the blade with the Apex, it lasts for an absurd amount of time. Most of my knives have not needed to go back on to the Apex once I sharpened them with it. And the reason for that is a couple of things: the mirror edge lasts longer with only minor touch ups, and I have learned how to better touch up the blades to keep an even better edge.

Thus, for the most part once I get a nice mirror edge on a blade, they don’t go back to the Apex, only to a leather strop and that takes fewer than 3 minutes to get back to razor sharp on all my knives.

Goof Off, Hone, and Stropping — The New Routine

There’s a large group out there which simply says the best way to maintain and actually sharp knife, is by stropping it with a leather strop and compound. So I bought one after watching this guide. I only use the green compound and the leather strop — and about 90% of the time I feel like a knife is getting a little dull, the strop will bring the edge right back to razor sharp.

In fact, most knives from the factory don’t require using the Edge Pro Apex at all, I just strop them when they get dull. The only reason I put them on the Apex is to add a mirror finish to them, which is then even easier to keep sharp.

As the title alludes, the way to keep a knife sharp once it is already sharp is with Goof Off Gel Spray, a ceramic honing rod, and a leather strop loaded with green compound. The Ceramic hone I use came with the Apex, and it’s good for a blade that is a little more worn than the strop can handle quickly. The Goof Off is only for cleaning the blade, especially tape residue off. With that combo, my blades are basically all razor sharp, and quickly/easily maintained in under a few minutes each.

How I Sharpen Now

Here’s the path I take now to maintaining a sharp knife, which will remain sharp for a very long time:

All of this means that in about a minute I bring back most edges if they are factory, or set by the Apex. So not only does the knife stay sharper longer now, but it sharpens back much faster with much less abrasive methods.

I now remember what it felt like when I had the time (before kids) to only use water stones. Except now, the Apex is better than those and just way easier and faster. For the price and the results, I don’t think you can beat this sharpener.