This is my favorite fixed blade to date, and the only one that has worked for me to EDC if I wanted.

I’ve never owned a Winkler before this one, but I’ve long wanted one so I was really excited to get this. And when it came time to snag one — I was torn between getting a larger knife first, or one that I might actually carry. I went with something smaller that I could carry, and really this could be the only fixed blade I own and I would never be left for wanting.

The Winkler Standard Duty 2 (SD2) is fantastic in every way. And it’s one of the best looking knives I own. 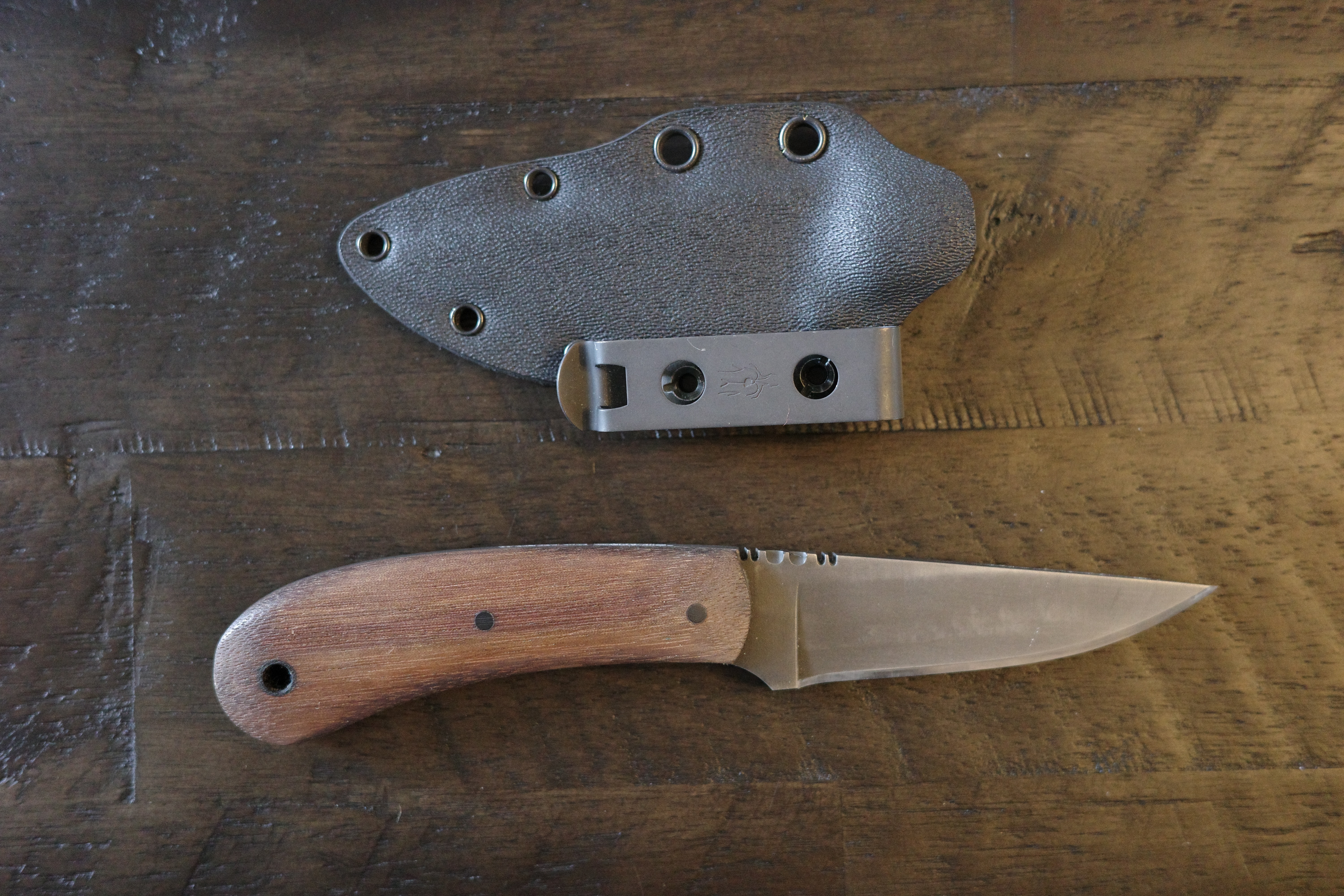 This is a drop point blade (the difference between the SD1 and SD2 is the blade shape) which measure at 3.25” in blade length and an overall length of 7”. This is a thick blade at 5/32” and it’s coated with a black oxide finish, which Winkler notes has no glare — can confirm. 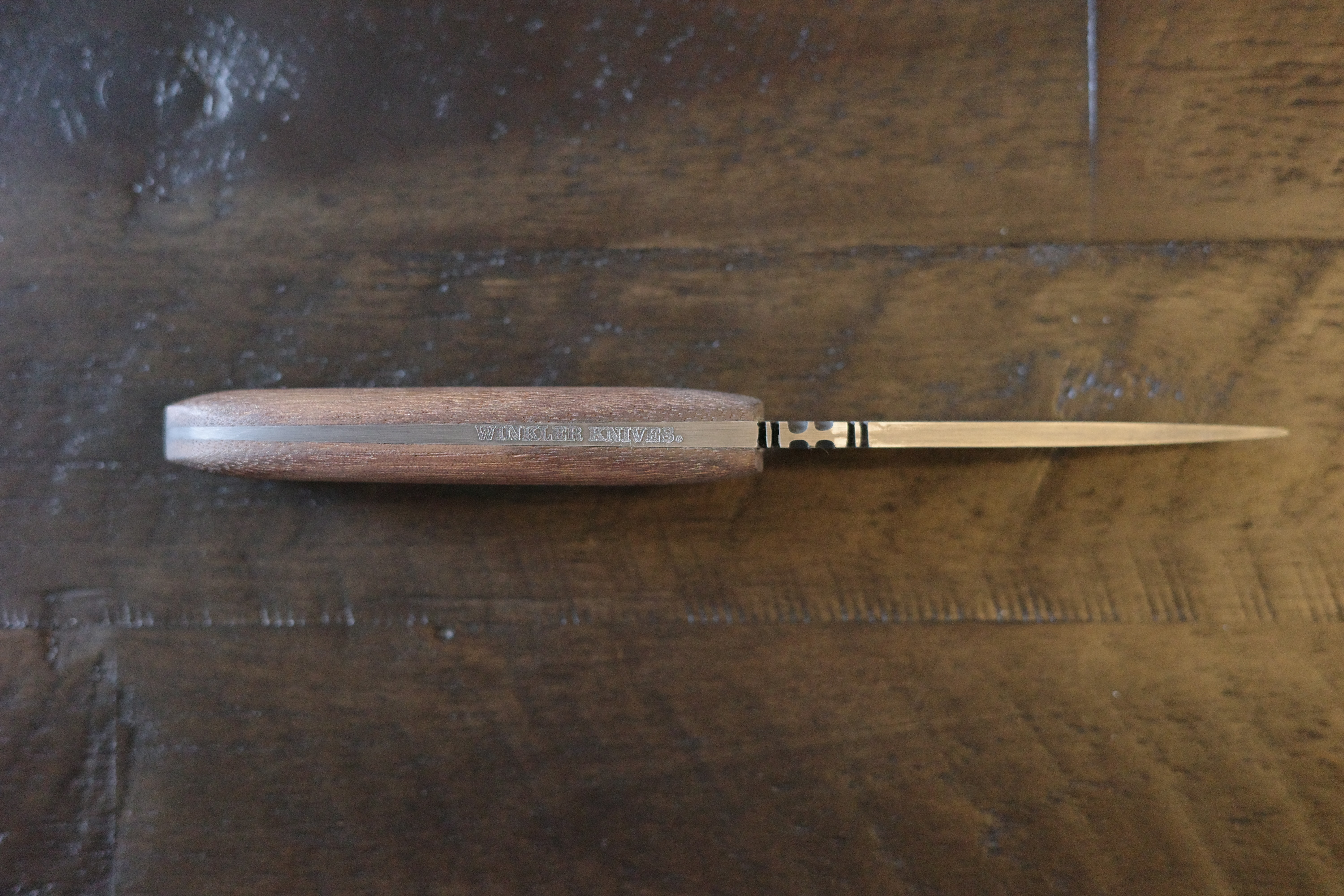 The metal itself is a rather scarce 80CrV2 and I didn’t know much about it, but KnifeArt summarizes it well here:

80CrV2 knife steel provides a cutting tool with extreme toughness and edge retention; provides a high value for performance vs. cost to manufacture. Due to its toughness, hardness, and availability, it is prized in the construction of tactical knives, hunting knives, tomahawks, and everyday carry designs. 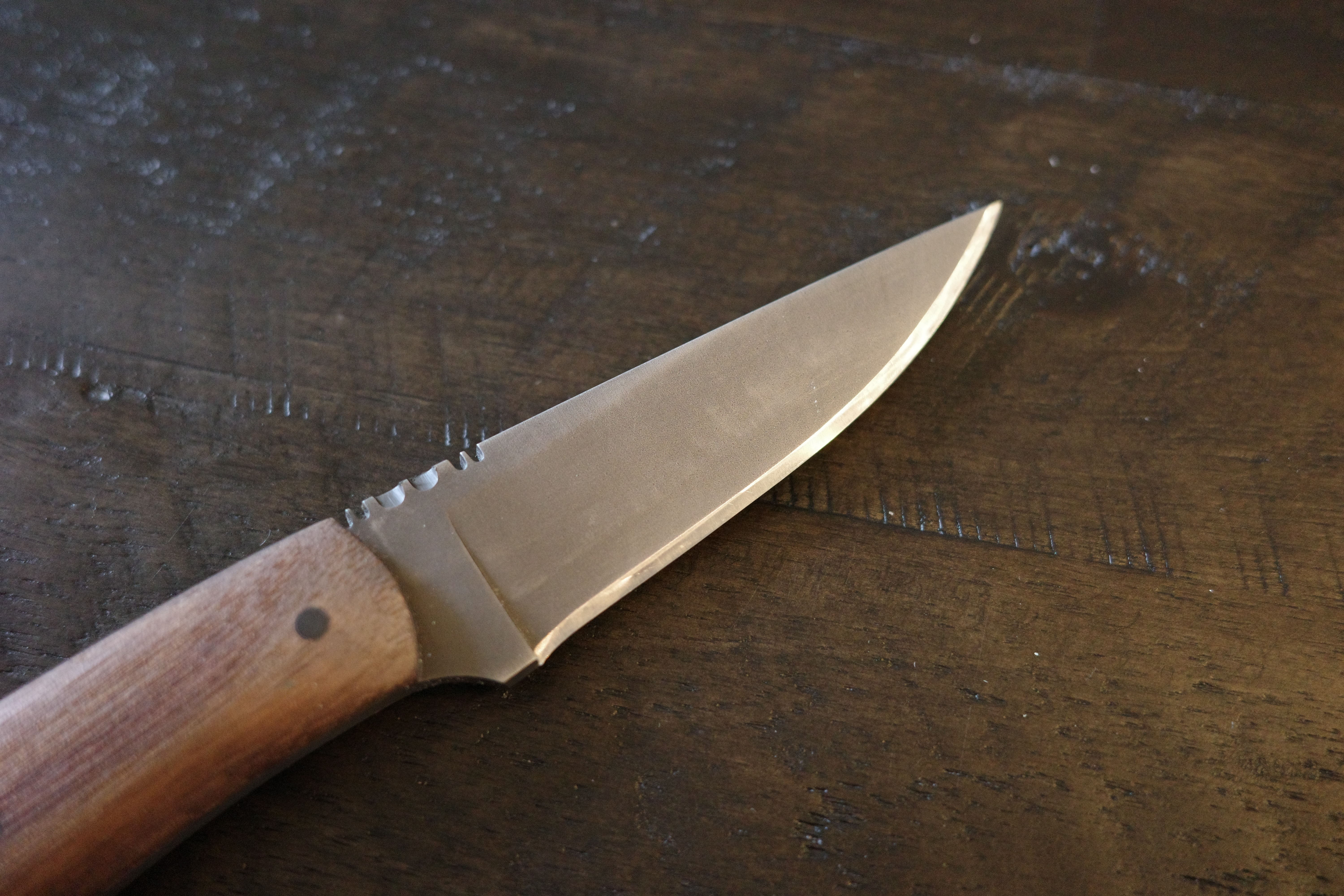 For what it’s worth, I’ve only found this used in Winkler knives so far. This knife feels tough as hell, and it’s proven so (as much as possible) in my use too. I actually didn’t love the angles on the knife when I received it, so I reprofiled it and messed that up the first go — I never was able to get it sharp on that first try. It was a chore to reprofile as well, but hitting it once more resulted in an insane edge. And that edge has some serious durability and wear resistance. I destroyed a huge amount of cardboard with this, and after I finished it was still nearly razor sharp. I even slipped out of my cut a couple of times and hit the very pointy tip on harder surfaces with no damage — something more brittle might have chipped or broken the tip in some way, not so here. 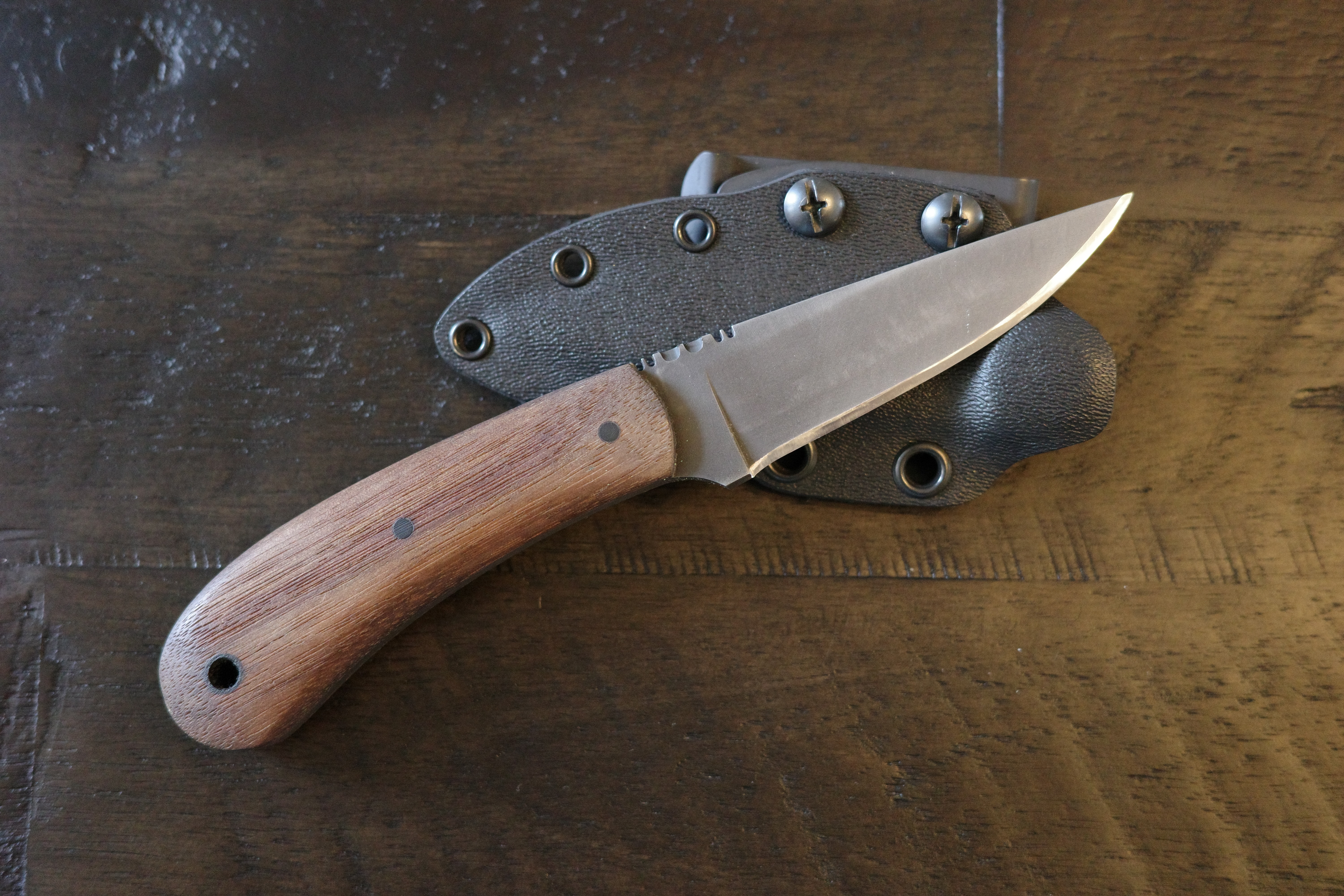 The handle is walnut and it looks great — there’s many handle options to choose from. Winkler ships it with a nice pancake style Kydex sheath which has a robust black oxide finished clip on it — all of that is a pretty trim package and the sheath is felt lined. It’s a nice touch given the price of the knife for the sheath to be something slightly better than standard.

A big reason I picked this knife up, was because I have a strong desire to carry a fixed blade when I am not going into the office. But to do that I needed something that was the right size, but also which worked well for what I wanted. The Bradford Guardian 3 is perhaps a better EDC fixed blade, but I love the way the SD2 looks over it. I also wanted something in a tough steel so it could be a small, less threatening, knife to take with me on day hikes and such — get the job done, without scaring the tourists out of Texas. 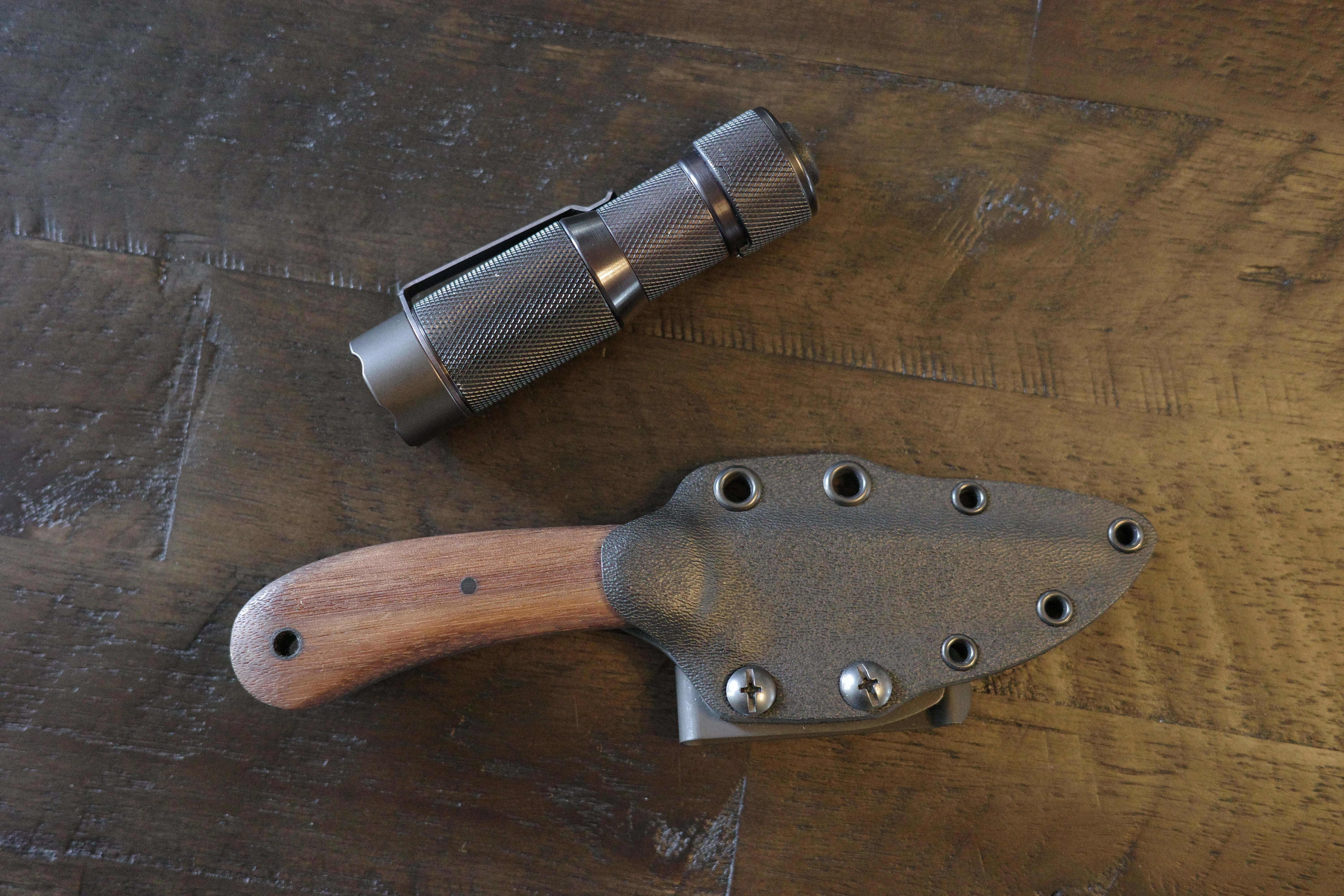 So, in carrying it and using it for my around the house tasks, I’ve found this knife to be pretty stellar. It’s a little tricky to carry as setup. It rides too high in the pocket if you use the provided clip on the top edge of your pocket. It also rides too high on a belt for me as well. I tended to carry it in my pocket with the clip secured to a Ripcord pocket organizer which held my flashlight. This put it in a discrete spot, but also gave me something easy to access. The issue with this is that it’s not advisable to put away the knife without removing the sheath from your pocket — too much room for disastrous error. 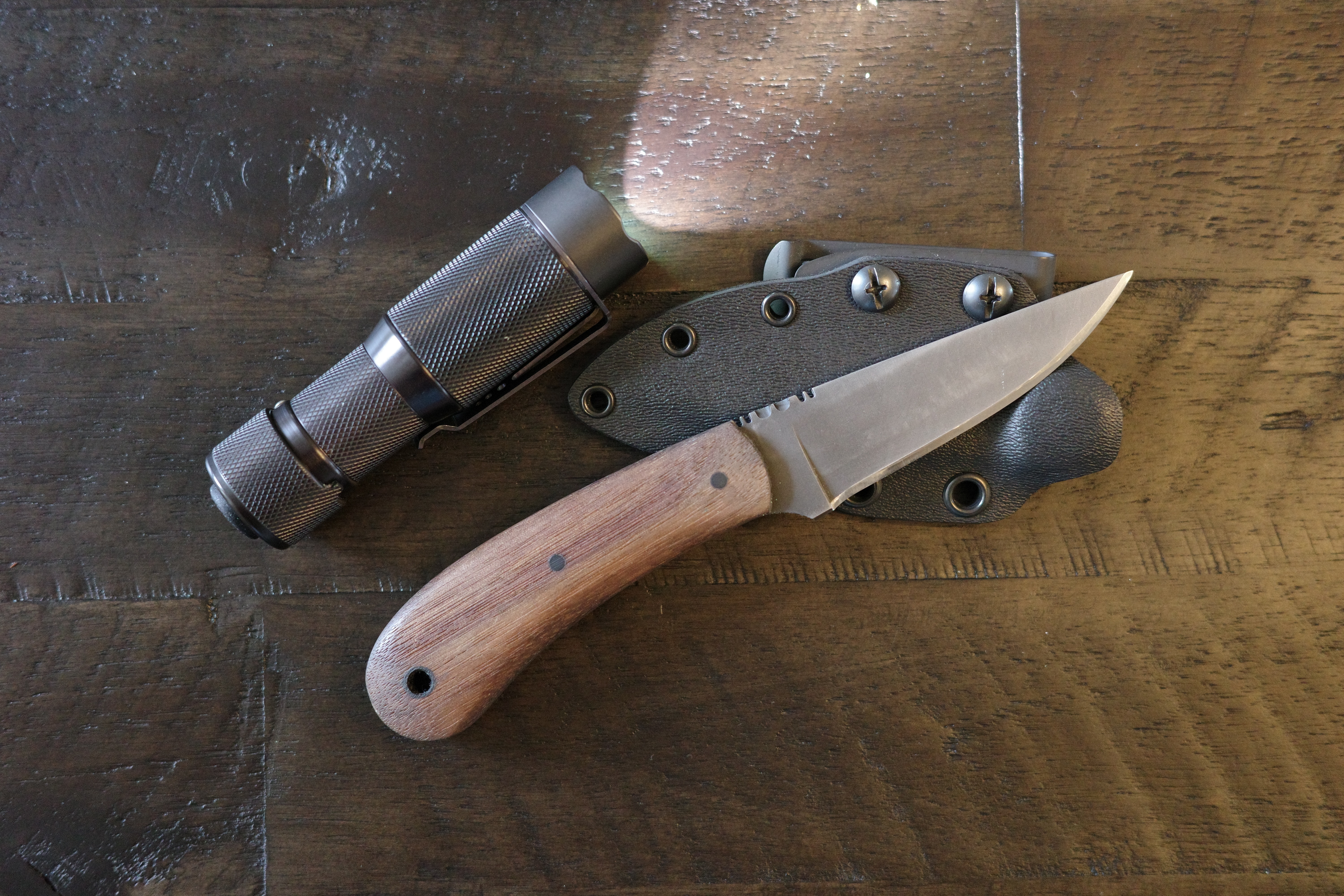 So it does carry pretty well, and the sheath allows you to roll your own favorite carry option pretty easily with a couple mount points on it. The knife is very light, as I have pocket knives which weigh a lot more than this. So you are dealing with bulk, not weight and bulk. In hand is where this knife excels. It feels great. The handle is small, but substantial in your hand and the shape allows for a very secure grip on the knife no matter the task. The Walnut is not only lovely looking, but has held up well for being in my pocket a lot, as well as being used all around the garage with dirty hands. 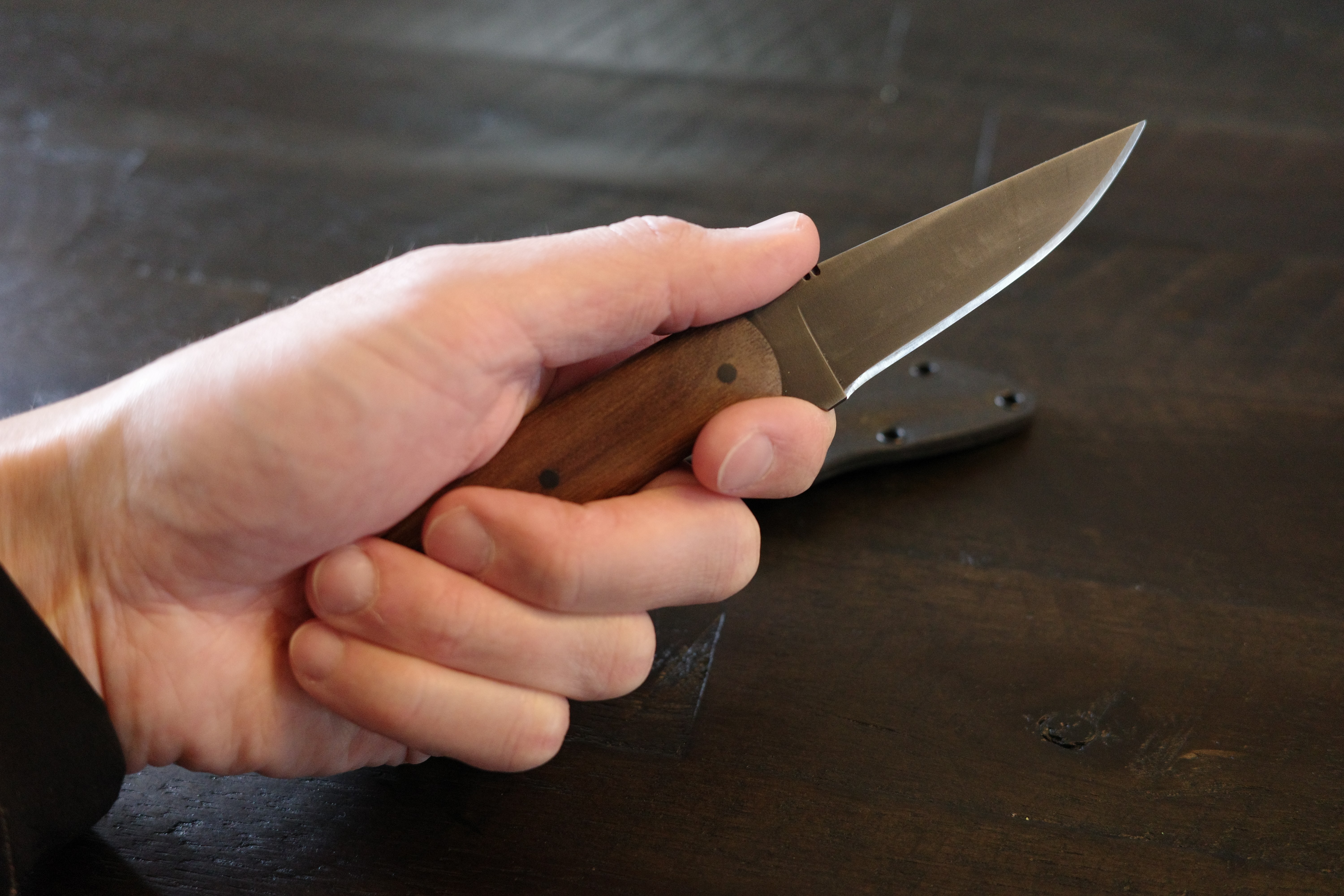 The balance is also nicely done, and the jimping on the spine is very aggressive (and good looking) so you have a great spot to leverage the blade with your thumb. But the big thing is the blade. It’s thick, but it is thin enough that it easily can dive into whatever you are cutting — though keeping the spine out of the cut is a must if you want to make a smooth slice down anything. Because of that slicing is best done very controlled, or the knife will tend to bite too far into the cut and the thick spine often would get wedged — not typically an issue with most things, but for cardboard it is.

That said, it does slice well, especially given the rather chunky spine. More than that, this steel has proven excellent. It really is a hard wear steel, but also the edge retention is particularly surprising for me in use. I cut up enough boxes with this knife that I typically would have needed to toss the utility blade at the end of it. The knife started from a razor sharp edge I could glide through phone book paper. And it ended with an edge that still cut through it phone book paper with ease, but slightly less than gliding. A half dozen passes on a leather strop later, and we were back to where I started. I’d imagine that if you used this knife primarily in the outdoors with wood and such — you wouldn’t need much sharpening of it. 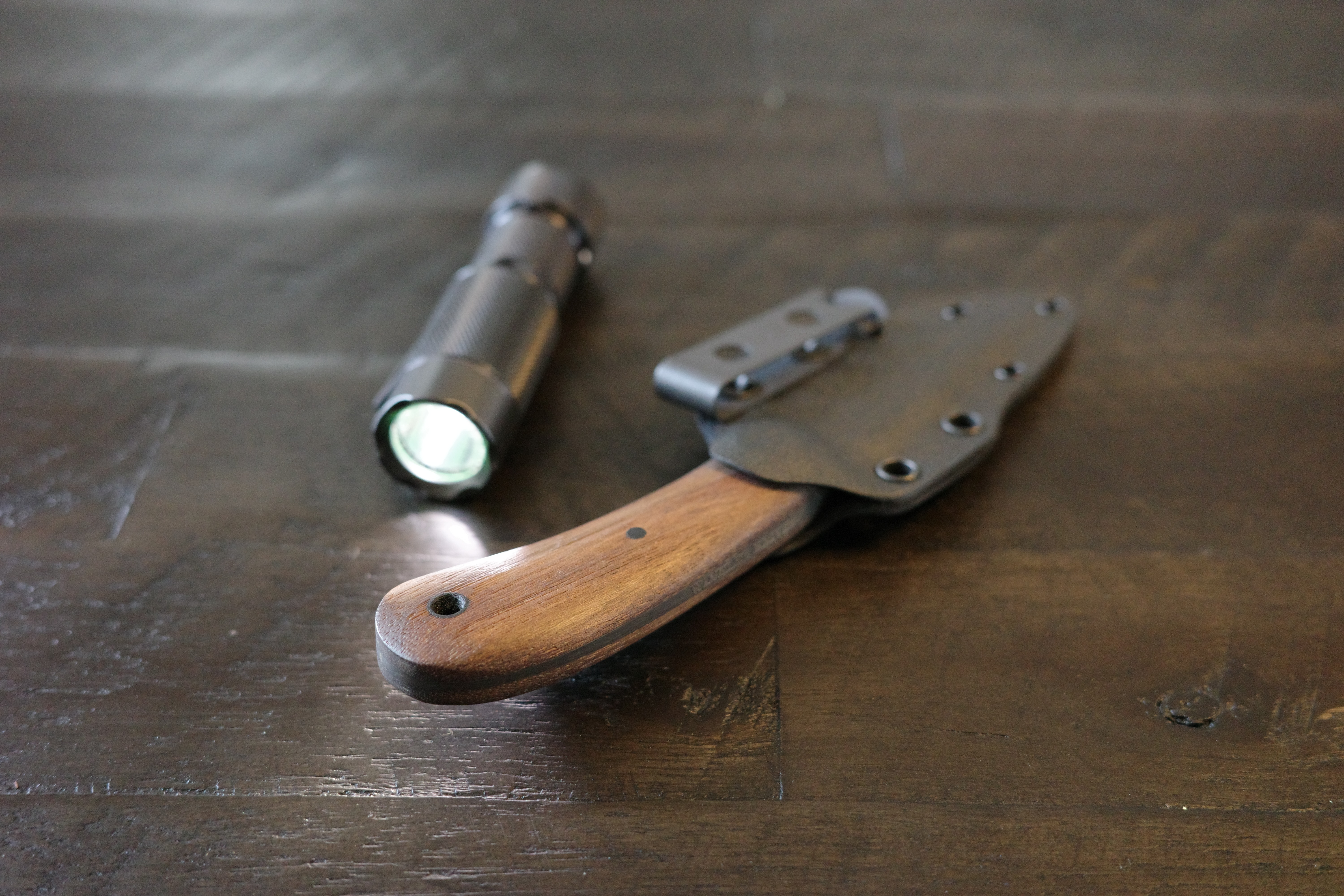 Even around the house, on Amazon boxes and other things, the edge retention is great. I love using this knife for EDC tasks.

The only caveat is the finish on the blade. It’s not as hard wearing as the rest of the knife itself. The black finish looks amazing. It’s very matte and as they say not reflective at all. But where the sheath rubs on it has started to fade to the steel below. And because I didn’t tape up the knife when profiling the blade angle, the finish started to wear substantially from the slurry. That was a lesson learned for me there, but the damage is done. I do think the patina this blade develops with this finish only makes the knife look better, but it isn’t highly corrosion resistant so you’ll need to keep that in mind. I would prefer them to have used something more durable to coat the blade. 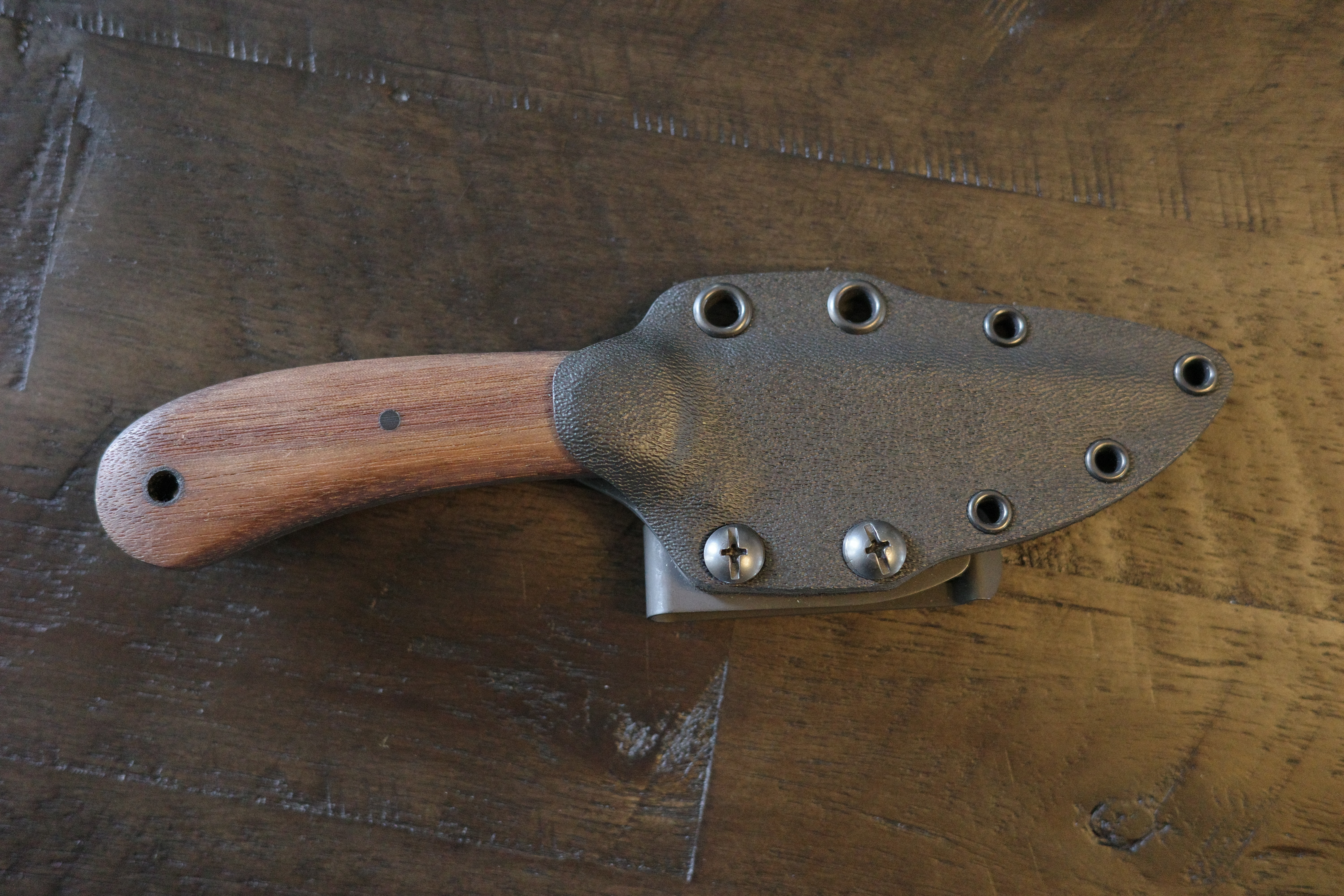 I love this knife. It’s my favorite fixed blade I have ever owned, and I fully intend on buying more Winkler fixed blades because of this. It’s a stellar overall package, and while I need more time with the steel — what I’ve seen from it so far impresses me. 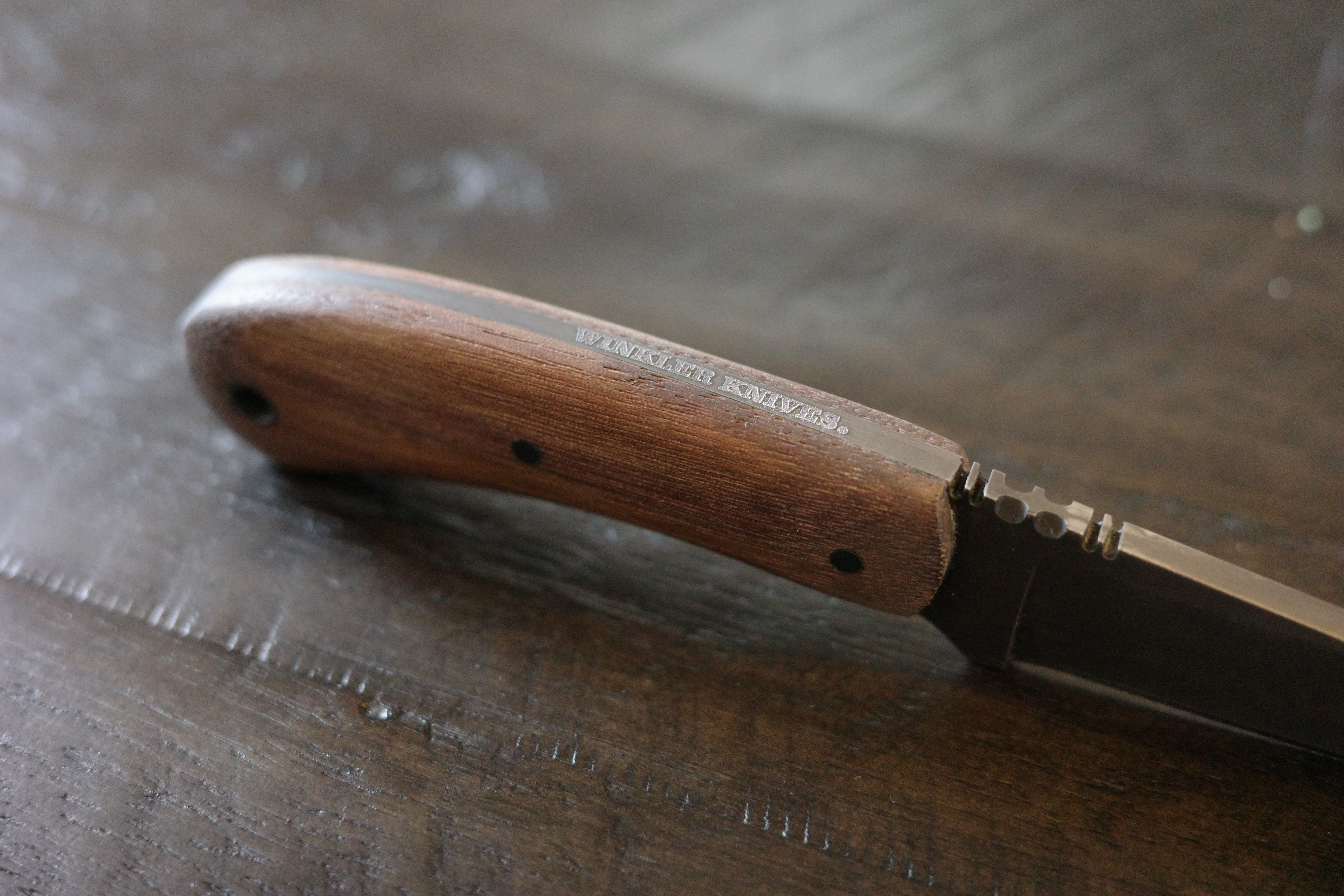