A classic duffle, with amazing materials, and intangible things that make it great.

Of the more iconic duffle bags on the market, Filson is probably the most prominent with the Rugged Twill Duffle Bag line up (three sizes). Once you note the design details on this bag, you’ll see it all over media and generally everywhere. Being a bag nut, I’ve always wanted one, and my wife surprised me with this Small Rugged Twill Duffle Bag in Otter Green over the holidays.

This bag is classic Filson, made from their 100% cotton Rugged Twill which is a very dense and heavy material — on the original breifcase I have it is only showing wear now after 6 years of my owning it. This stuff is made to last, and while the cotton will start to get a little fuzzy in high abrasion points, it will also fade out a touch over time. Filson applies an very light amount of wax to help, but keeping it waxed is the end user’s decision — I don’t wax the twill myself. All of the handles are made from Filson’s Bridle Leather, which is an amazingly sturdy but supple feeling leather. It’s outstanding, and I rarely say that about bag materials — it’s worth all the money to get their Bridle Leather. 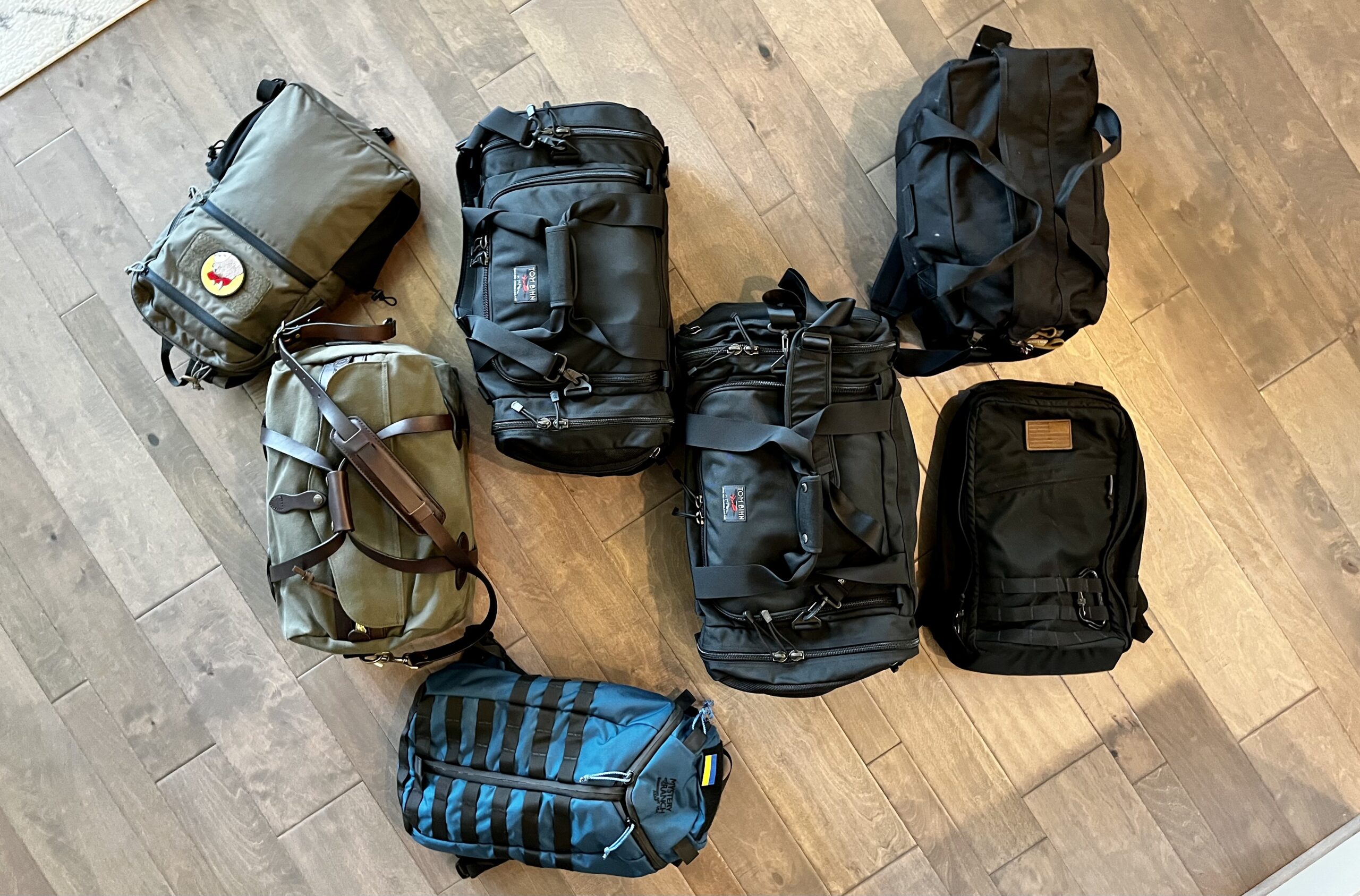 Compared with many other bags.

The bag itself is a 33L duffle, single compartment, which measures: 18″L x 11″W x 10″H. I would describe it as small, but stout in nature. The bag has a single zipper across the top with a flap to cover it — the zipper is classic Filson brass, with high abrasion to the teeth — you could scratch your hand on this stuff easily. 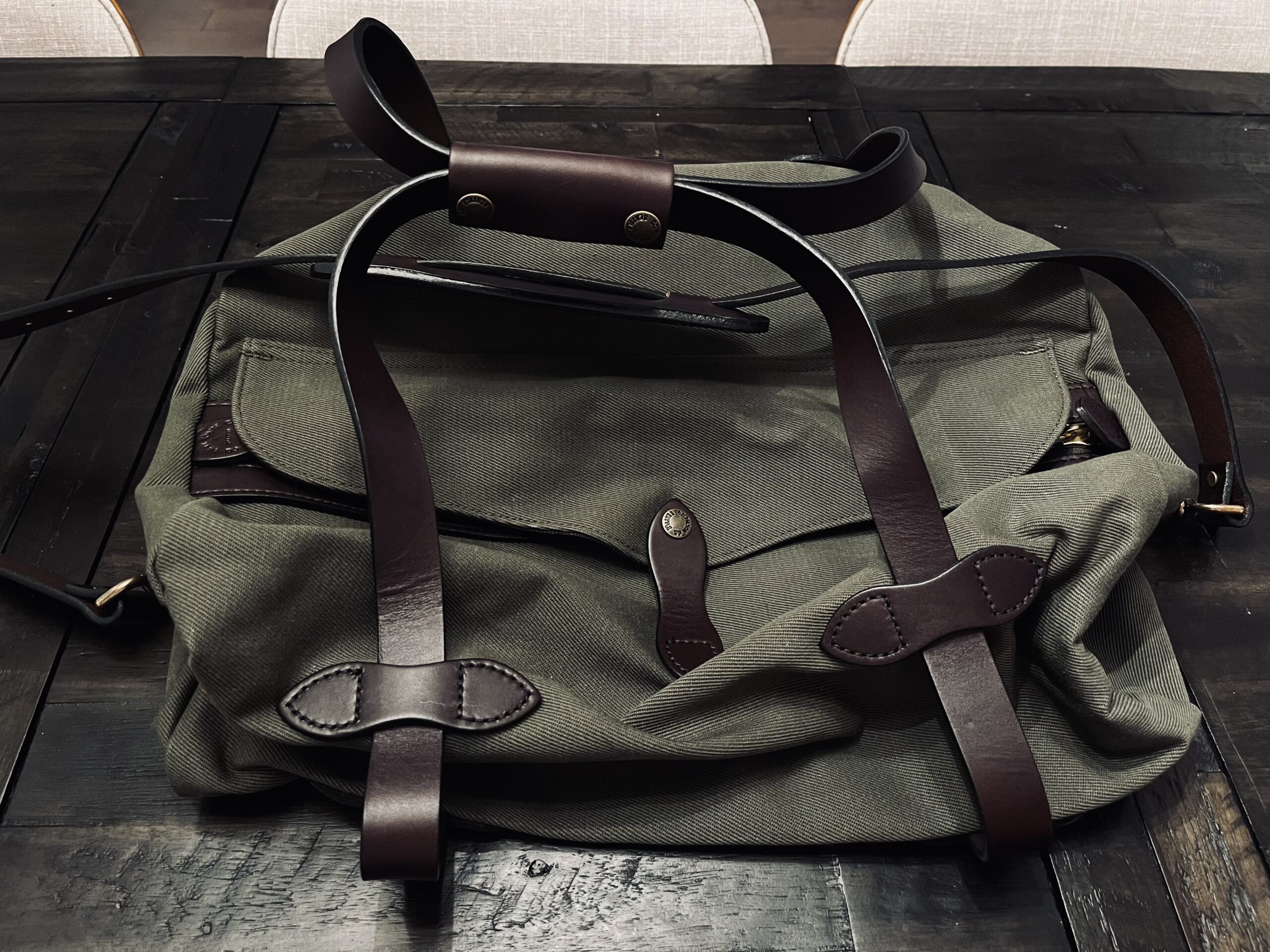 The materials, the entire kit, top notch. The sizing is excellent for most people, and is one of those very versatile sizes for weekends and shorter trips.

I’ve been able to use this now on a few of short trips, here it is with my ASAP stacked on top, both fully loaded:

I’ve found that the opening of the bag is tricky, and at times can feel like it doesn’t open quite enough. Thus if something on paper should just fit the dimensions, it might not actually be able to sneak inside, past the zipper. Add to that the abrasive nature of the brass zipper teeth, and a little care is warranted. 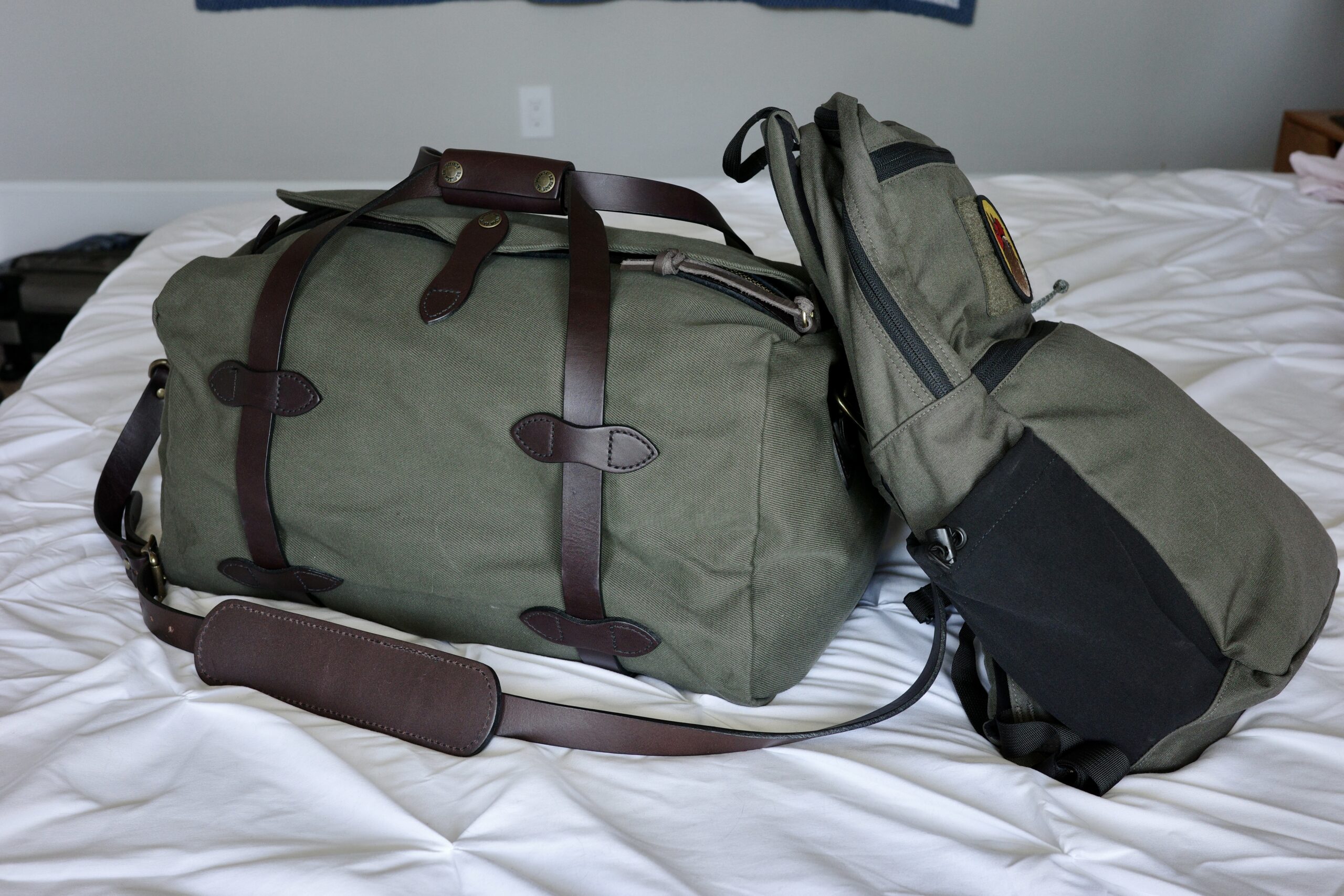 Once packed, this bag really hits its stride. It is a great size to fit in most cars and move about many places. The shape makes it sit a little flatter like an oval, so that it stays put without rolling over on itself. The bridle leather handles feel great to carry, and have the right distance from the top of the bag. The leather shoulder straps is essentially the same as my briefcase, and over time as it breaks in and molds to my body it will only get better. At first it can start slightly stiff and a little slick feeling, but after a year or so of use that should subside. 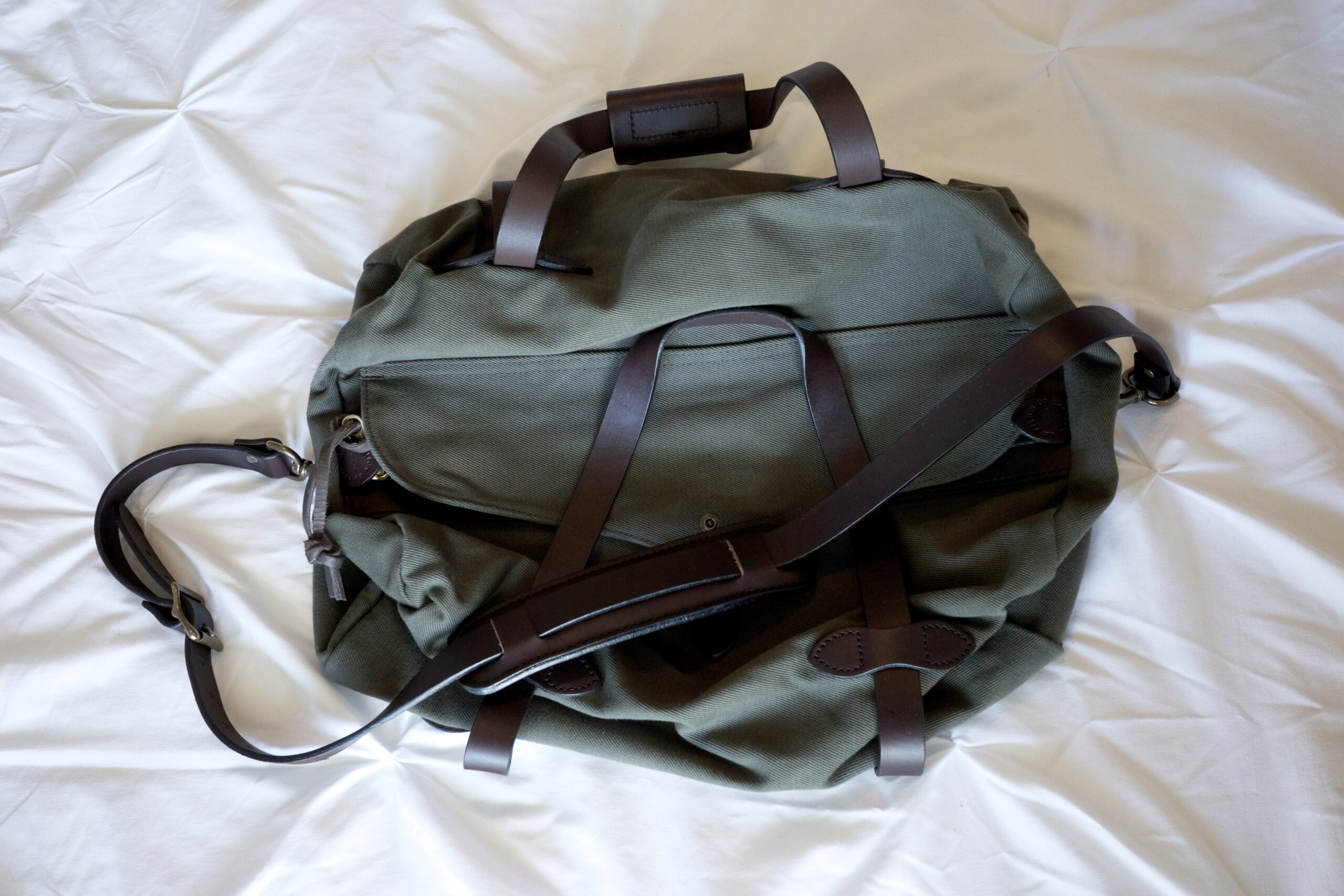 I thought the flap that goes over the zipper to protect that area from the elements was simply an aesthetic element of the bag, but it’s more than that. It’s a hidden gem on this bag. It makes the bag easier to stack, as the zipper isn’t rubbing against other things. And because of the rather oversized nature of the flap, it will easily flip out of the way and stay out of the way, but likewise it is sufficient to keep things in the bag if you button the flap down and leave the zipper open. While I thought this was a rather silly addition initially, I quickly began to appreciate it as I used the bag more and more — it’s one of my favorite parts of this bag. 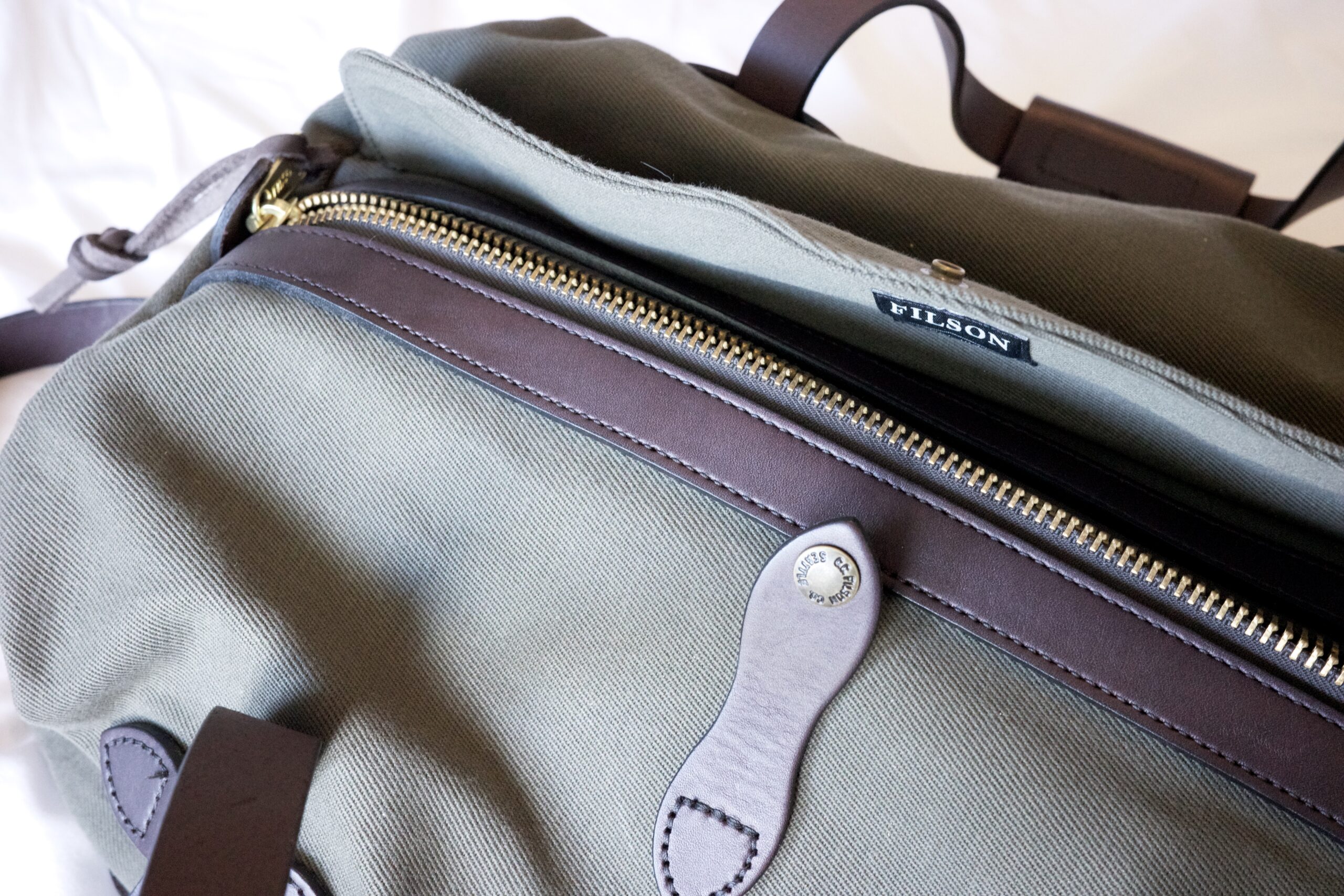 Like all Filson twill, this is extremely rugged stuff, and while the bag is expensive and looks nice, it feels made to be tossed about. Made to be used, and not worried about. It’s a collection of great materials which look nice, but turn out to be very durable as well. 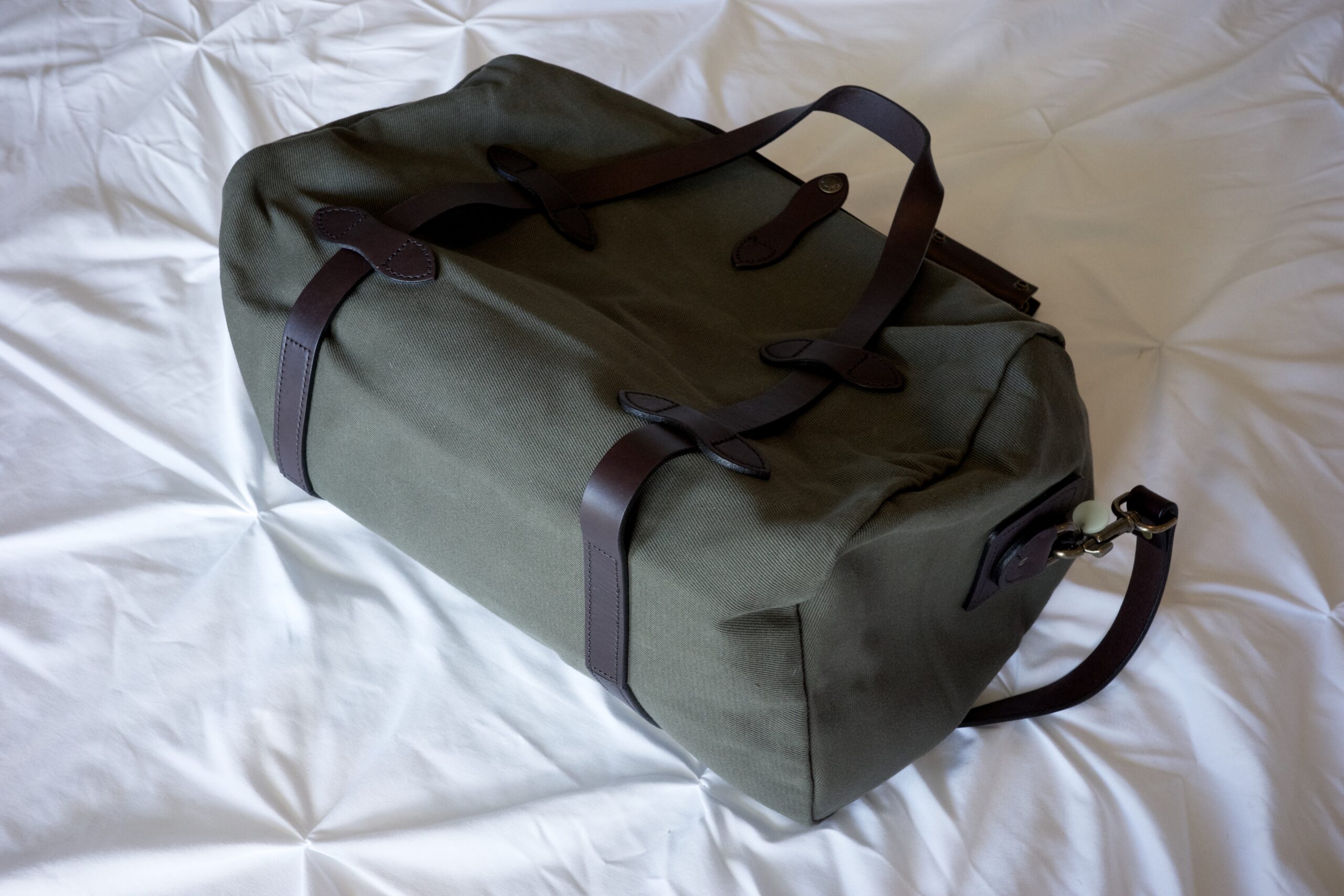 The handle straps are stitched in place at the bottom, but on the sides they move freely between two leather guides, this gives a compression effect on the bag.

For a 33L bag, this looks too small. But it packs pretty large, and remains easy enough to carry. It’s best carried stand alone, and not while wearing/carrying other bags. It is a bulky bag, which feels bulky to carry — however with the proper strap adjustment you can carry it across your back to help flatten the profile. And the not-round shape of the bag, makes it a little easier to pack and utilize all the space available. 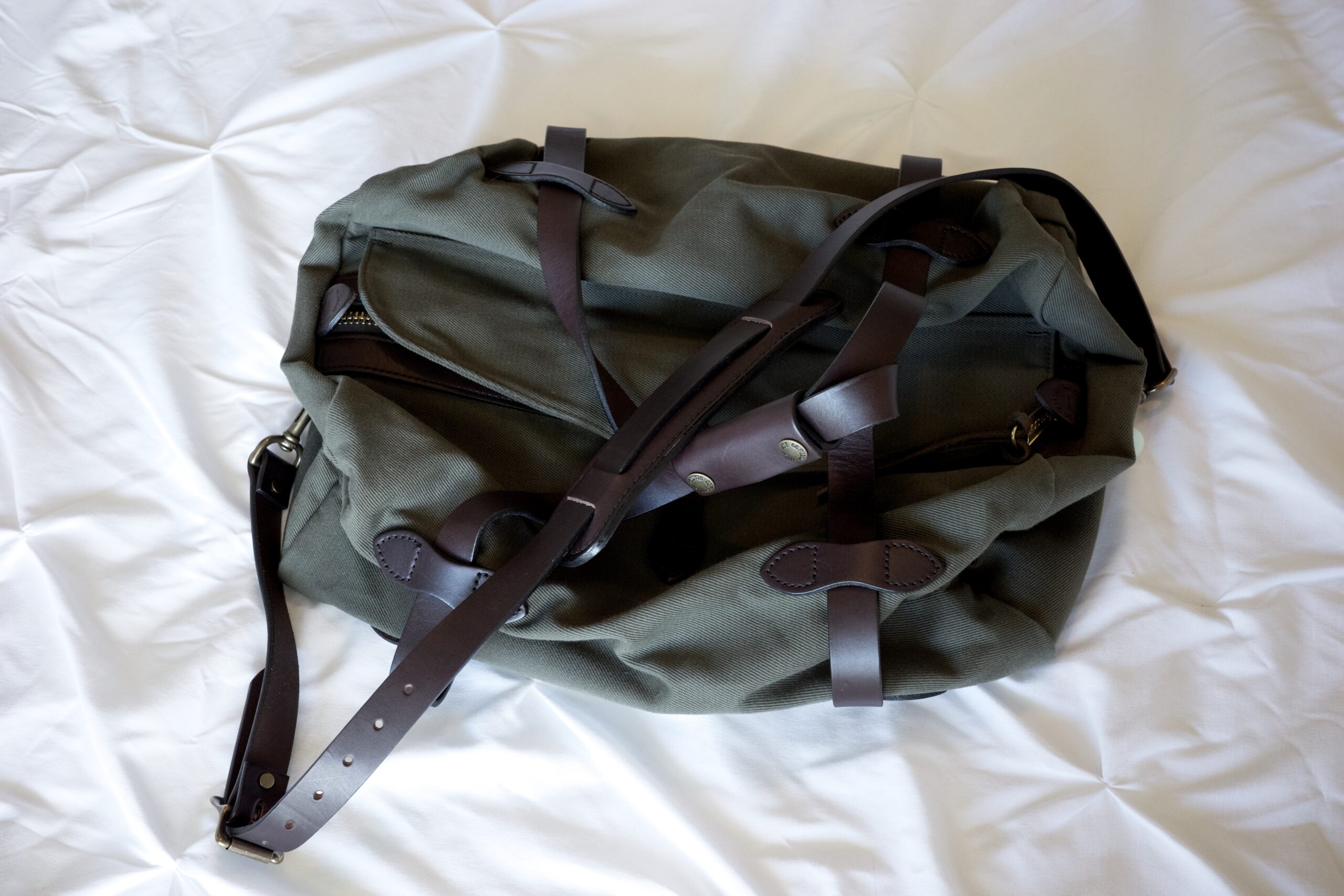 On the trips I’ve taken it so far, I’ve been exceedingly happy with it.

I love this bag, but it’s not without caveat. This is a barebones duffle bag, and there are many out there which offer the same durability and carry at a much lower price. There are few that look this good. I’m a big fan, to the point where I want the next size up as well — maybe another time. As of right now, I sometimes wish I had about 10-15% more capacity on this bag for my needs, but I also have many bags in this size class because it is among the most versatile of sizes you can own and generally I find that if I do end up with the extra space I am more annoyed by the bulk than anything else. 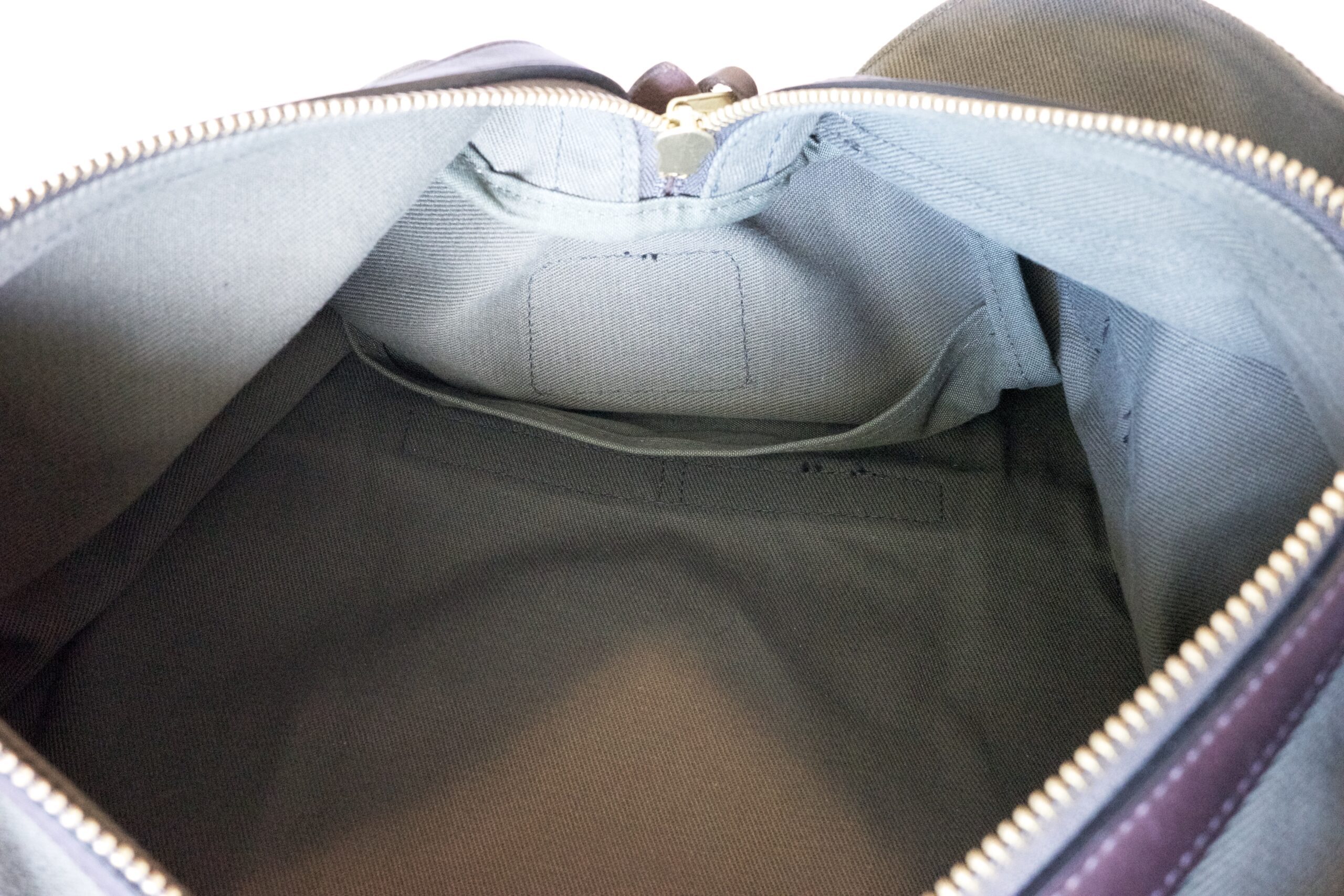 The opening of the bag could be better, and this is a trade off which comes with a classic design like this. 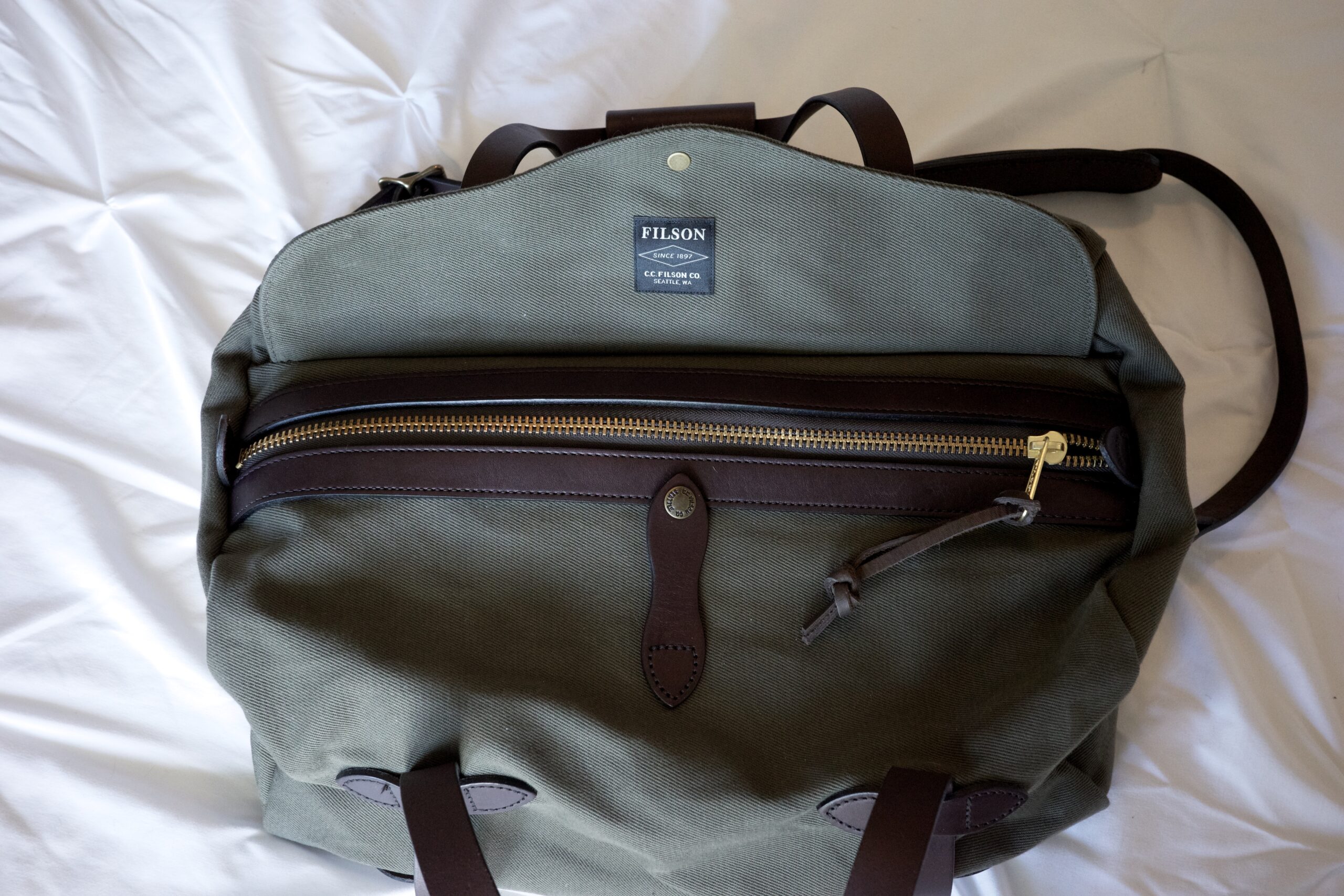 I get asked which is better: the 48hr Duffle, or the Small Rugged Twill. If I were to pick between them, I would choose the 48hr personally. But I think most people will find the Small Rugged Twill easier to pack and manage, while also being easier to care for. They are both exceedingly good bags, so as always, might as well own both. One note is that when I fly with the 48hr in the overhead bin, it often gets smashed about because it looks much smaller and people try to stack shit on it — this drives me insane. That is not the case with the Small Duffle as it neatly fills up its space in the overhead bin, so in that case the Small Duffle is a little better.

There’s where I am at, I highly recommend this bag as well.