This is one of the more comfortable, and rugged field watches I have used, and a really solid offering.

Boldr made a wave in the ’micro brands’ pool when it launched the Venture lineup of watches. A small, titanium cased, field watch with dive watch levels of water resistance — all for a very attractive price — a hard proposition to ignore for any fan of watches. I snagged a Boldr Venture Sandstorm to give a try and see what the watch and brand are all about.

It’s a very compelling watch, but quirky at the same time. 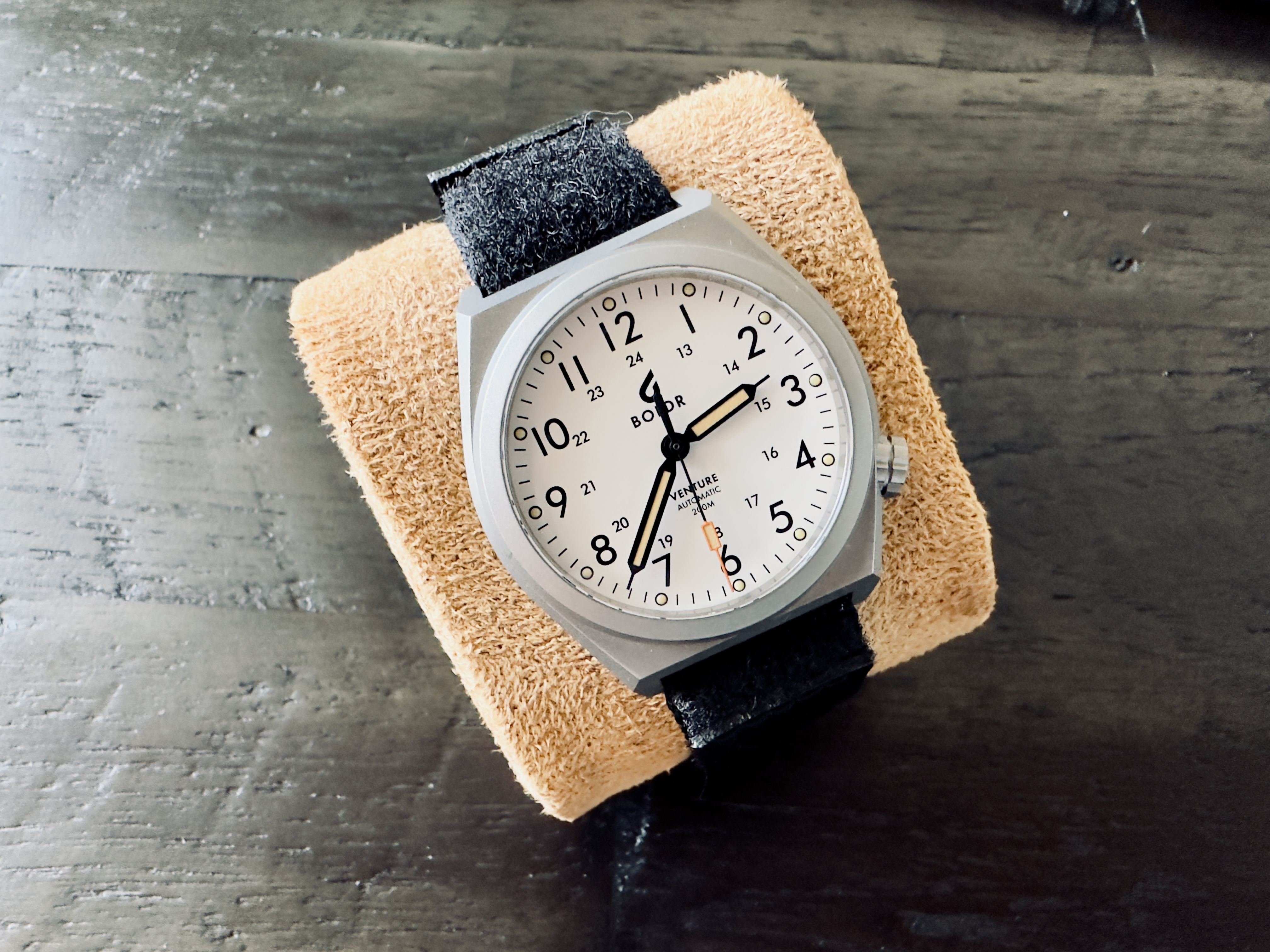 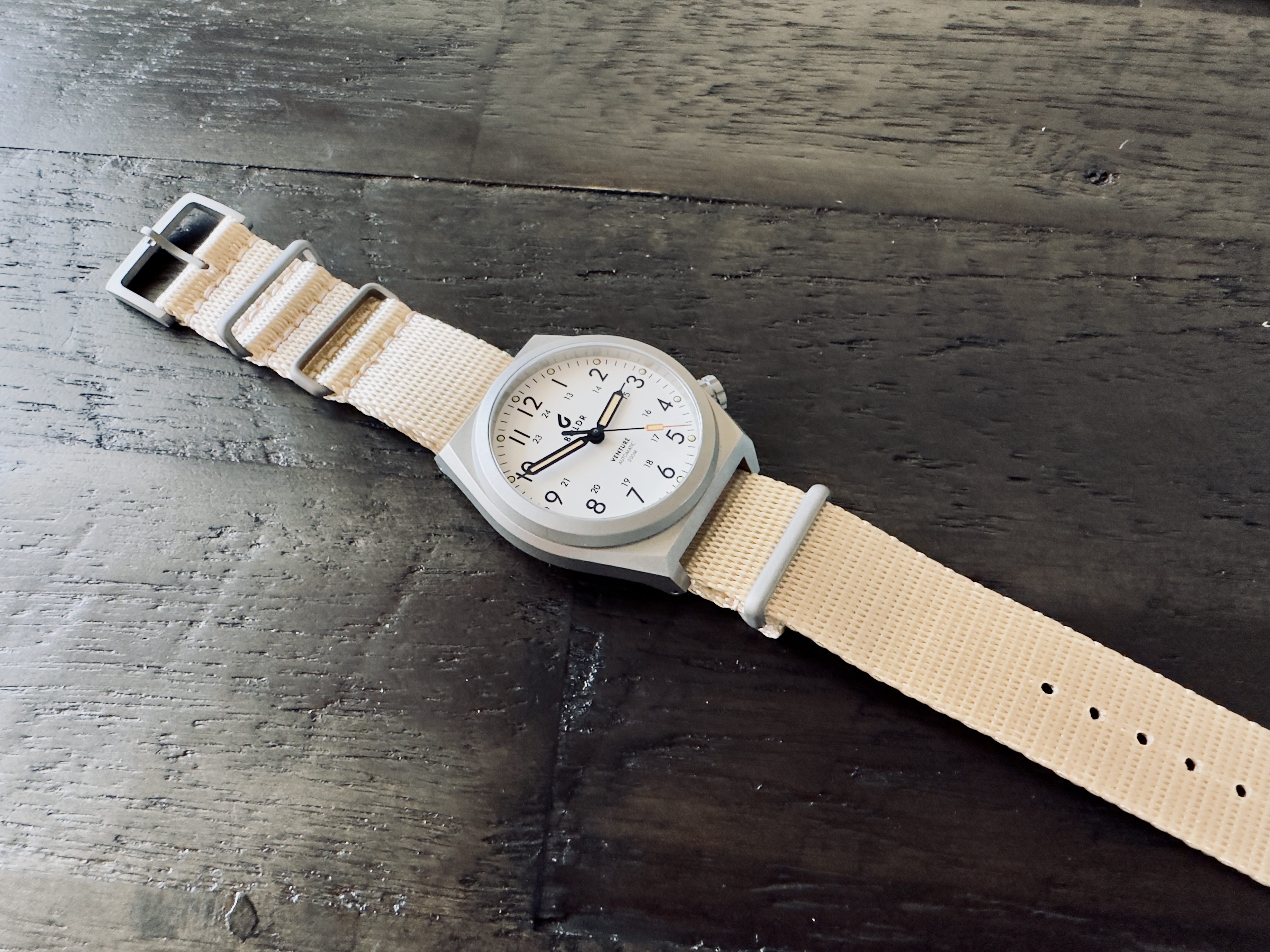 There’s a lot going on with this watch, so I’ll run through it in bullet points instead:

What this translates to, generally, is one hell of a workhorse watch for about $300. It can be worn in almost any non-dive situation, as the water won’t impact it. The crystal is sapphire, the movement is tried and true. The case weighs next to nothing — it’s impressively (and at times off putting) how light this watch is the first few times you pick it up. 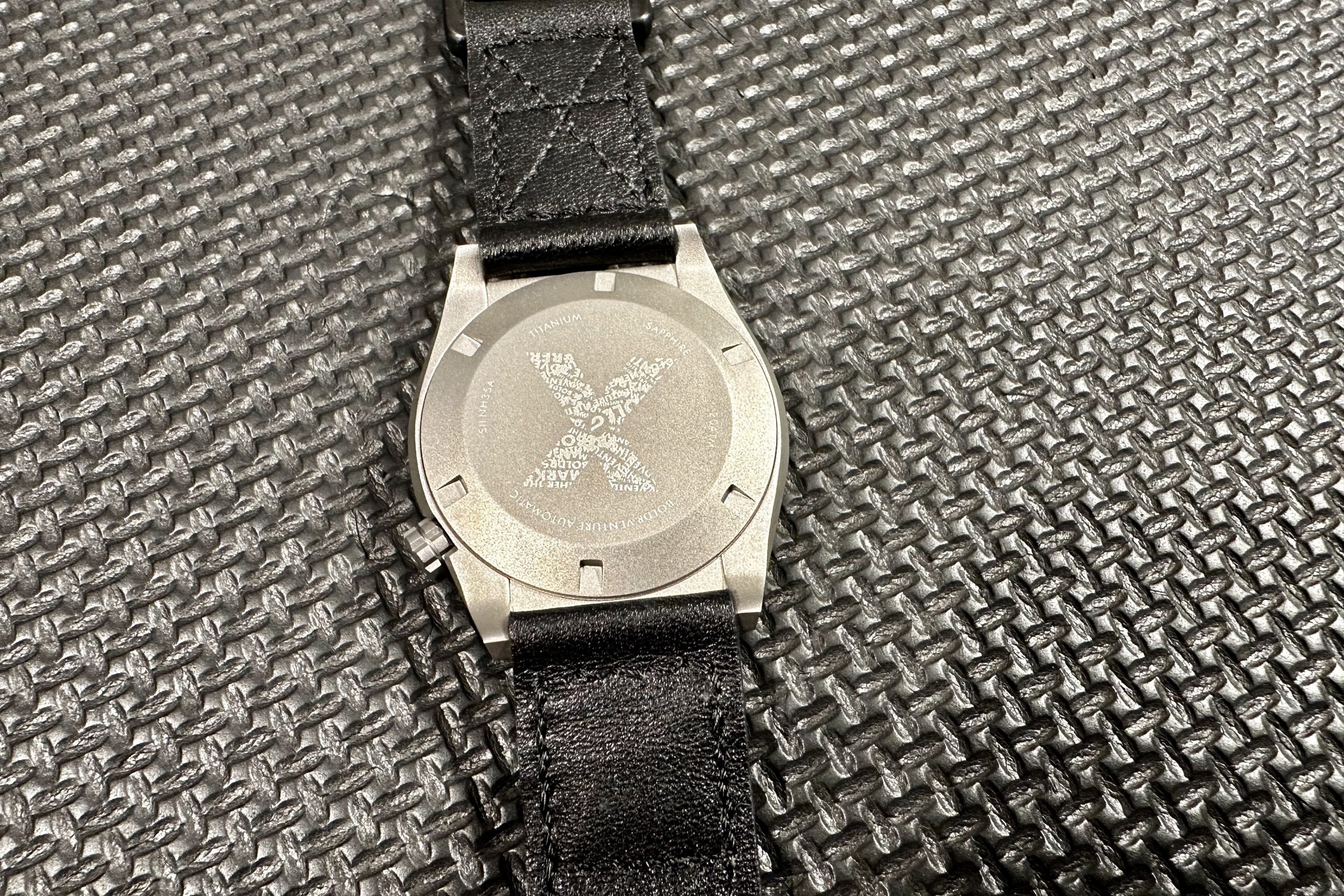 As is common with this movement class, there’s a slight rattle which can be heard when the watch is tapped or moved in certain ways. It is not nearly as pronounced as other watches, but it is there.

From where I sit, the only odd thing about the specs on this watch is the ratio of the diameter to the thickness of the case. It looks a little chunky just because the case is cut with sharp angles, and rather small — as 12mm on it’s own is not an overly thick watch. This watch does visually look chunky because of the design of this case, especially the sharply terminating lugs. 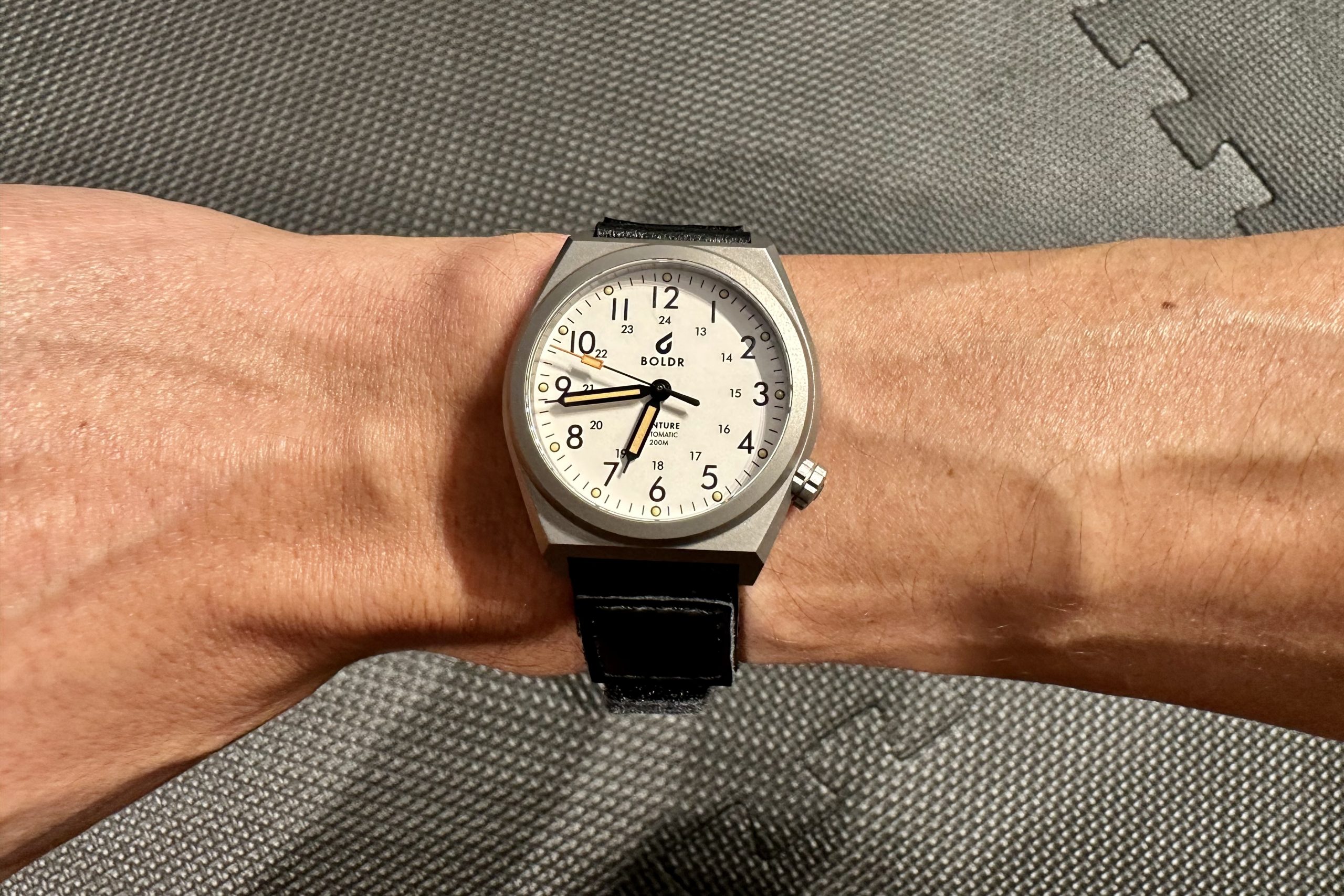 First, I need to confess: this watch ships with a lovely NATO strap that is made from soft and smooth nylon webbing, and has custom titanium hardware to match the case, but I immediately removed the strap. There’s two reasons for this: I loathe NATO straps as they make stuff too bulky; and secondarily I found the light color of this particular variant to be not a great color in general. Instead, I equipped this watch with a variety of straps, my favorite of which is the velcro strap from Uncle Seiko you see in most of the images. 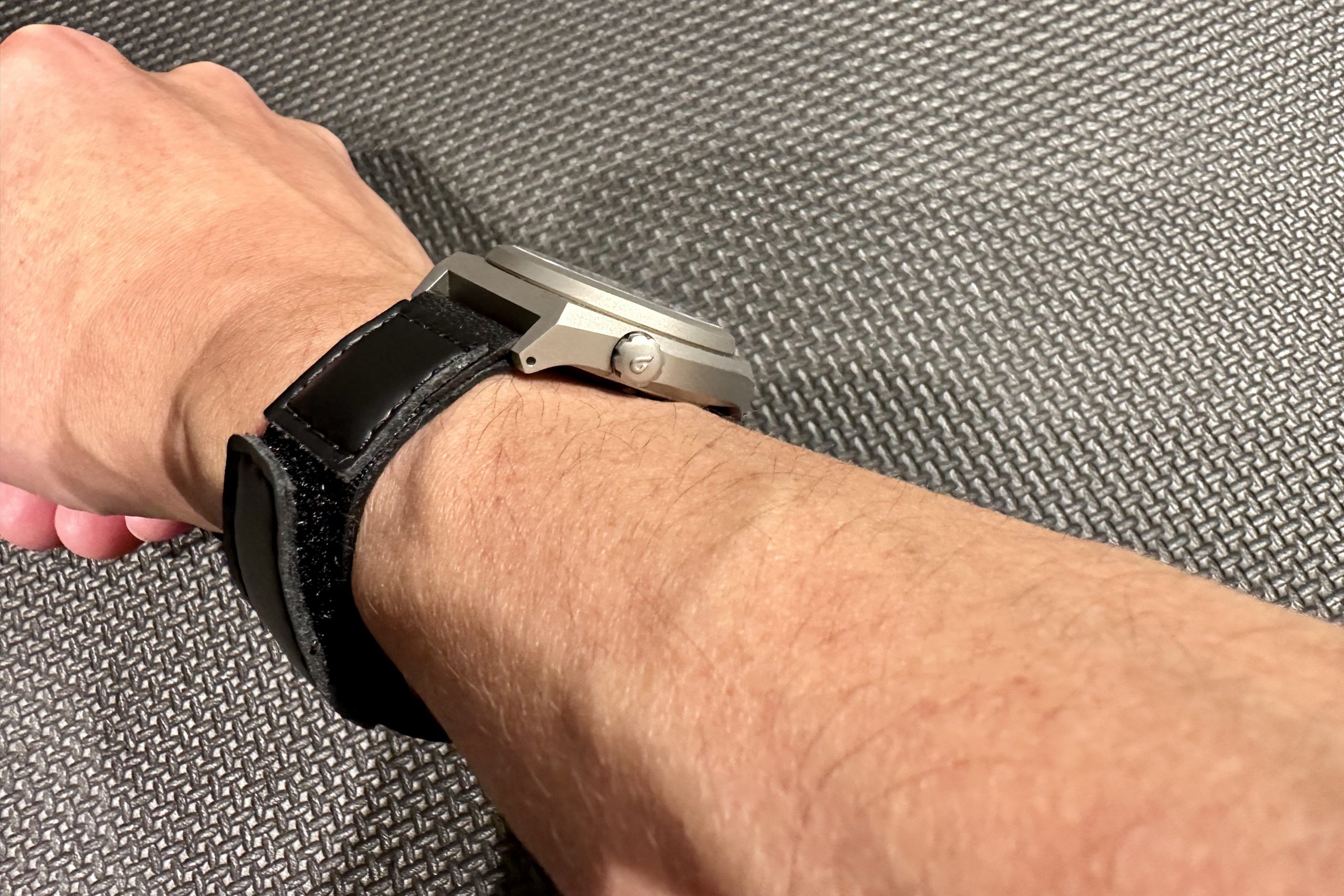 That said, the strap almost weighs as much as the watch case itself. I’ve found that there’s three states of watch wearing that you can talk about when looking at the wrist feel of watches: 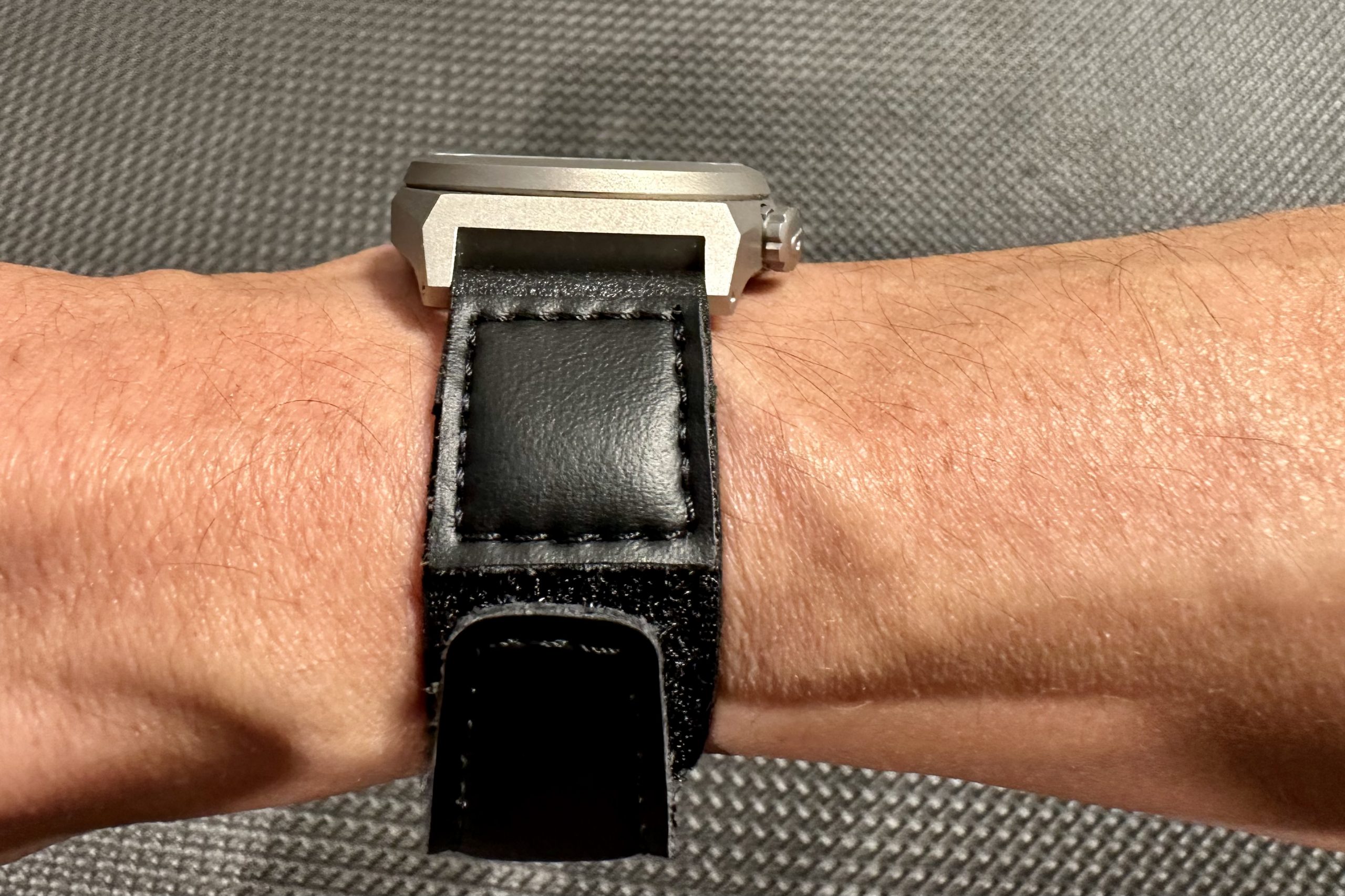 The Venture is fully in the first category. A small watch, which weighs nothing, and almost certainly will wear small enough to be contained on most men’s wrists. I wore this to sleep in several times, and it is among the most comfortable watches I’ve ever tested. In fact, that is across the board, not just sleeping — the case size and weight combine for an amazing wearing experience. 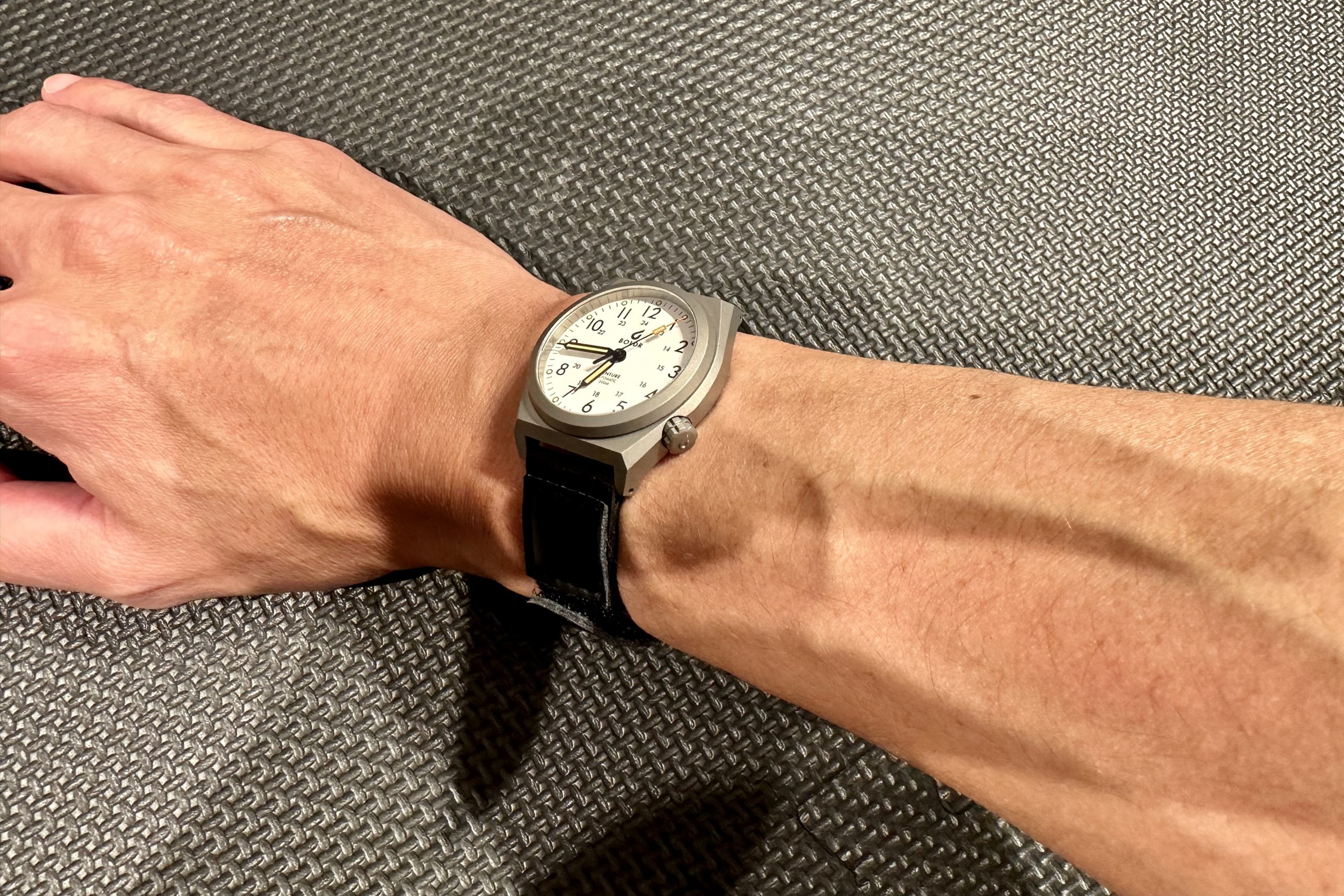 Next, let’s talk about the dial. I specifically wanted the white dial to give myself something a little different. In person, it’s stark. If what you want is very high legibility across any environment — that’s this dial on this watch. It’s instantly readable at a glance. The lume is very good, even with the hour marker lume being only small dots, those retained my ability to read them upon waking in a dark room. (I test this by charging the lume with a UV flashlight for 20 seconds before bed. When I wake up in the dark room in the morning, I assess how readable the watch is.) The lume on this watch is deceiving, because it is far better than you expect, and overall just highly readable and holds a great charge. Impressive. 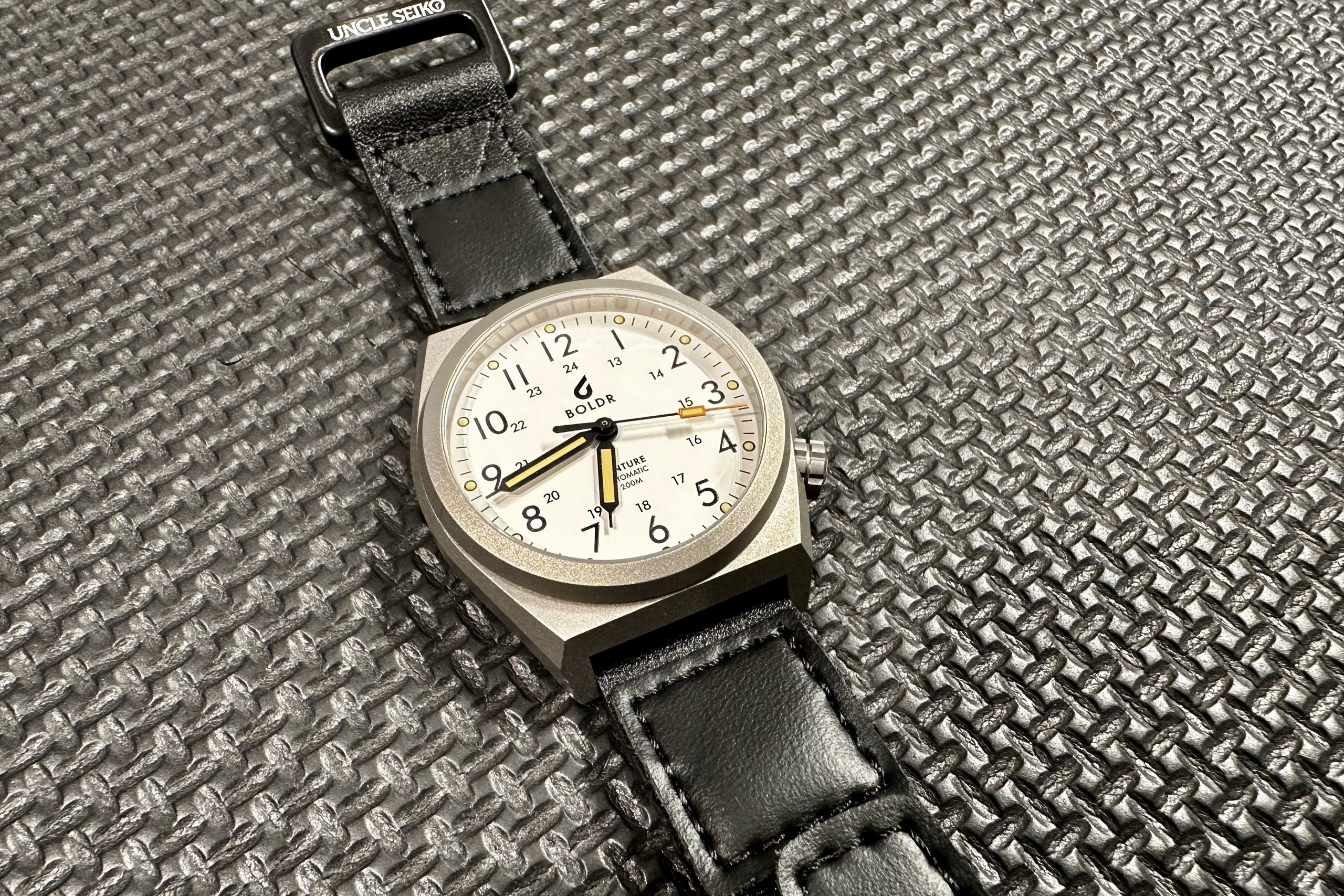 However, the dial is busy, and because of the small case size, it can be a little too busy. To my eye, the lack of breathing space on the dial cheapens the overall design aesthetic of the watch. There’s too much crammed in there. Large lume pips with a a minute track, then the large numerals, then the smaller 24hr markers, then a three liner for the model information and the large Boldr logo and text — drop a couple of these and I bet things start to look more balanced on a whole.

There’s two further downsides to this watch. The first being the power reserve, as this movement offers a scant 41 hours of reserve — it’s simply too low for me. You have to wind this everyday if you are not wearing it, as you won’t make it two days. The amount of times I have had this watch stop was annoying — but that’s also a factor of this being one watch among many I am testing at the same time. Thus if it were your daily wear, taking it off only when going to bed or something — you’ll be absolutely fine. 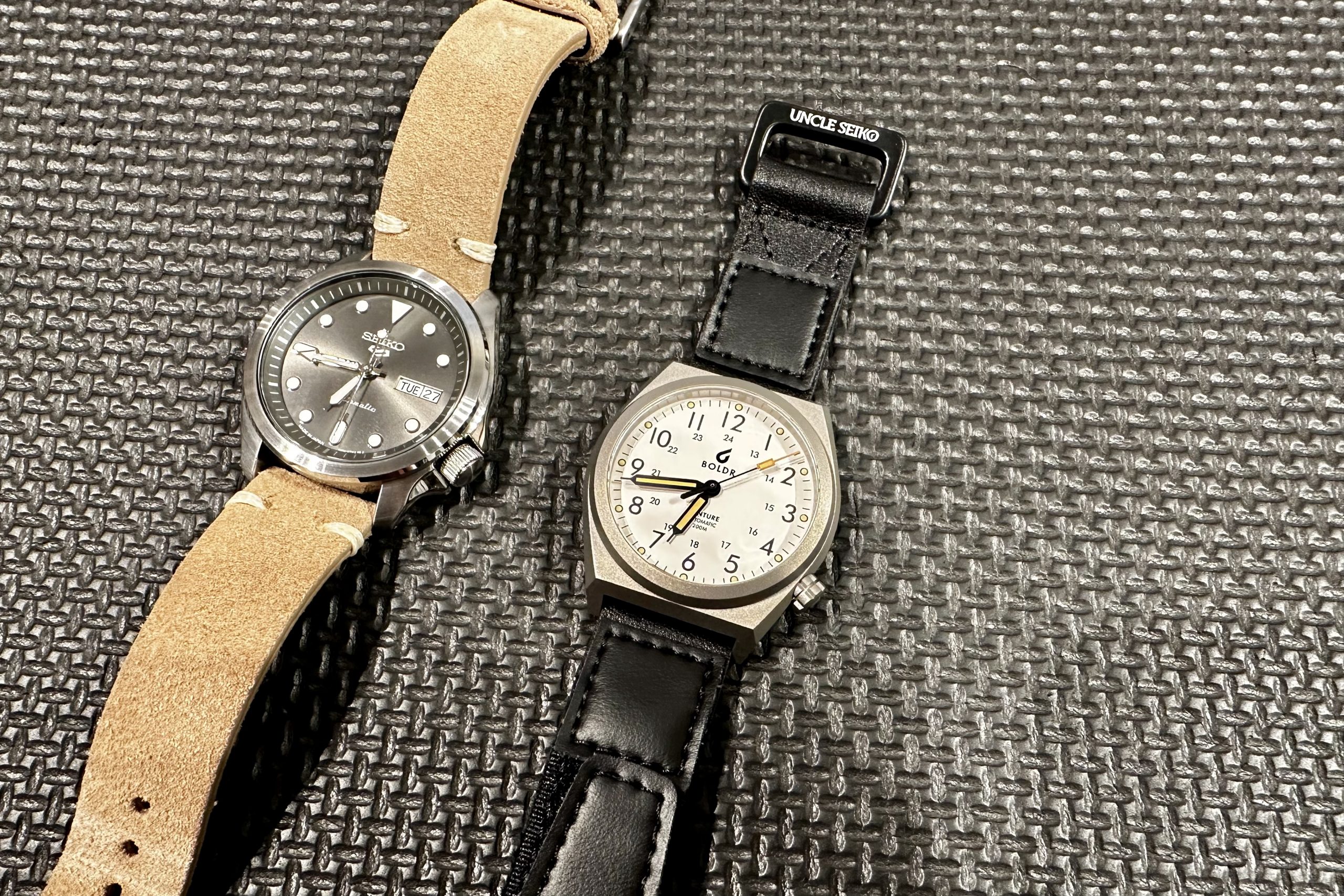 The movement is simple, robust, and unlikely to cause you issues. But by the same metric, it’s not likely to wow you with precision either. My watch example is running at about -5 seconds per day overall, but a lot of that is sitting in a watch box or on a winder. When wearing it, I’ve found that the range varies widely, a condition of the movement not being regulated through multiple positions. What this means is that you’ll likely want to adjust the time on this every week or two, otherwise don’t worry about it too much. I’ve had it run +6 seconds one day, and -7 the next. So while the average can look good, the wearing accuracy varies much more widely once you are living your life with the watch on your wrist. If anything, this is the one spot where the costs are being kept down — and that’s probably the correct spot too.

That’s not to say this is a poor watch at all, in fact I think it’s quite compelling. There’s 200m of water resistance, you can put this watch on and never take it off, and it will be fine. The screw down crown is at the 4 o’clock position, which is annoying for a lefty, but great for the other 80% of the world. I will note that I do find the crown a little difficult to screw back down, something I don’t have issue with on any other watch. However, because it has no date complication on this model, you shouldn’t need to worry about the crown too much.

Where I’ve found the sweet spot on this watch, is with a strap that does not sit under the case, this helps lower the overall profile of the watch, and makes it look more proportional on the wrist. This is my favorite way to were this watch, and I think it makes the watch much better overall with no real downsides here. 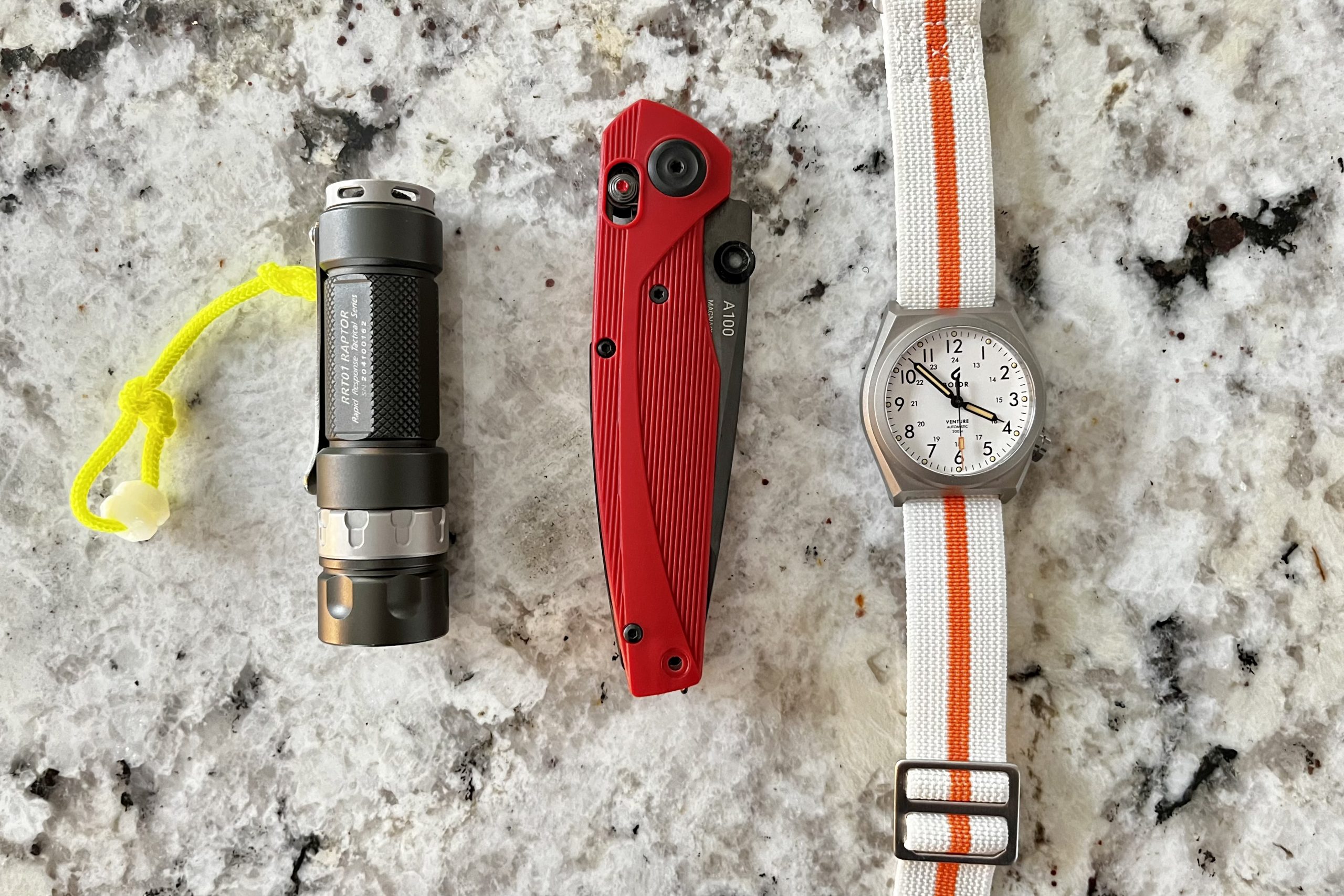 (Note on the bracelet: Boldr sells a matching titanium bracelet, and I am a huge fan of bracelets. However I didn’t get it here, the price for it is a little high, and I read more than a few reviews which stated it was nice, but not very comfortable. There’s also an argument to be made that a field watch shouldn’t be on a bracelet, but that could be another post on its own.)

My summary here is that it is a very nice overall package. Boldr offers a really rugged and robust field watch, for a really good price. If you need a workhorse watch, which doesn’t get in the way — I would be hard pressed to think of a better option.

For me, and my taste, the Venture sits slightly too small on my wrist. It feels like a 36mm watch on my wrist, not a 38mm. If it were a touch larger, I would be liking it a lot more — those with a smaller wrist should take note.

This is a good value for the money. It’s well made, and rugged. I’m a fan.