Congratulations. By updating to iOS 5.1 your iPhone 4S suddenly got 4G! Except it didn’t really, because as [Brad McCarty explains](http://thenextweb.com/apple/2012/03/08/att-apple-hspa-lie/): >The iPhone didn’t suddenly become an LTE-capable capable device by simply upgrading the version of iOS that it’s running. AT&T is defining its HSPA+ network as 4G, but by the very definition of HSPA+, […]

Congratulations. By updating to iOS 5.1 your iPhone 4S suddenly got 4G! Except it didn’t really, because as [Brad McCarty explains](http://thenextweb.com/apple/2012/03/08/att-apple-hspa-lie/):

>The iPhone didn’t suddenly become an LTE-capable capable device by simply upgrading the version of iOS that it’s running. AT&T is defining its HSPA+ network as 4G, but by the very definition of HSPA+, theoretical speeds aside, it doesn’t qualify as 4G.

So what the hell, Apple? McCarty sees this as Apple caving to AT&T — and that may well be — but more worrisome is that this move is pretty hypocritical and deceitful. [Here’s Phil Schiller at the iPhone 4S launch as quoted by GDGT](http://live.gdgt.com/live-apple-iphone-4s-event-coverage/):

>“Where have I heard these numbers before? This is what our competitors call 4G… the iPhone 4S is just as fast as all of these phones, even faster in real-world use.”

Yet, Apple refused to call the speed `4G` and many people (myself included) applauded them for that decision.

Now though? Now we have the *same* iPhone 4S and suddenly also get the bullshit `4G` moniker — that would be bad enough, but it gets even worse for users that don’t know about the difference.

AT&T is pretty horrible about this because if you viewed their coverage map when deciding between your shiny new 4G iPad on Verizon or AT&T — you immediately saw that AT&T appears to have a pretty robust 4G network. [Everything in the darkest blue is 4G according to AT&T](http://www.att.com/network/?wtSlotClick=1-006S2O-0-1) (also note that this is *not* the coverage map that Apple links to on the iPad buying page): 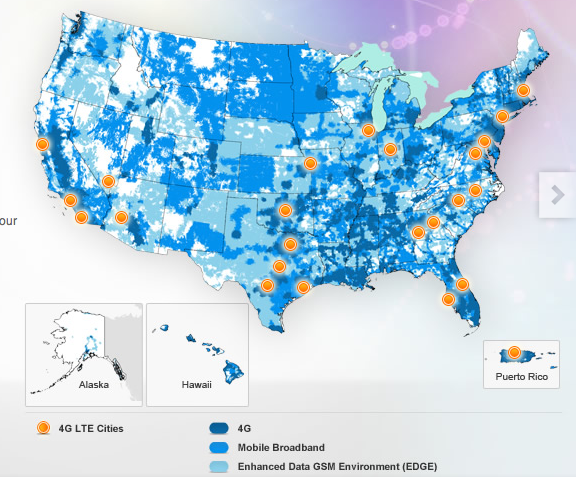 So the average person is likely going to see that AT&T has `4G` in just about every major city on the two coasts. That’s fantastic — I was almost fooled by this.

Then you read the map and see that `4G LTE` is by cities, denoted by the large orange blob. Fantastic: no LTE in the Pacific Northwest. So when you look at this map to determine 4G coverage, you really just need to be looking for giant, inaccurate, orange blobs.

Now, compare that to how [Verizon markets `4G` service](http://www.verizonwireless.com/b2c/CoverageLocatorController?requesttype=NEWREQUEST&zip=94531&city=Antioch&state=CA):

Everything in dark, dark, red is 4G LTE — every other red area is simply 3G. Now it is true that Verizon doesn’t have the faux-4G that AT&T does, so they might not be as good as they seem. One thing I can tell you for sure: Verizon has more 4G LTE areas (and a zoomable map).

Long story short: `4G` and `4G LTE` are not equals, and shame on Apple for misleading iPhone users with the `4G` tag that AT&T so clearly loves to toss about.