So [this is Writer Pro](http://writer.pro). It looks nice enough, but not nearly as stunning as the original Writer (a tool I used exclusively when writing for quite a while). Still, $40 for a new writing application — one that has no Dropbox support — is bound to draw criticism from many, so is it worth […] 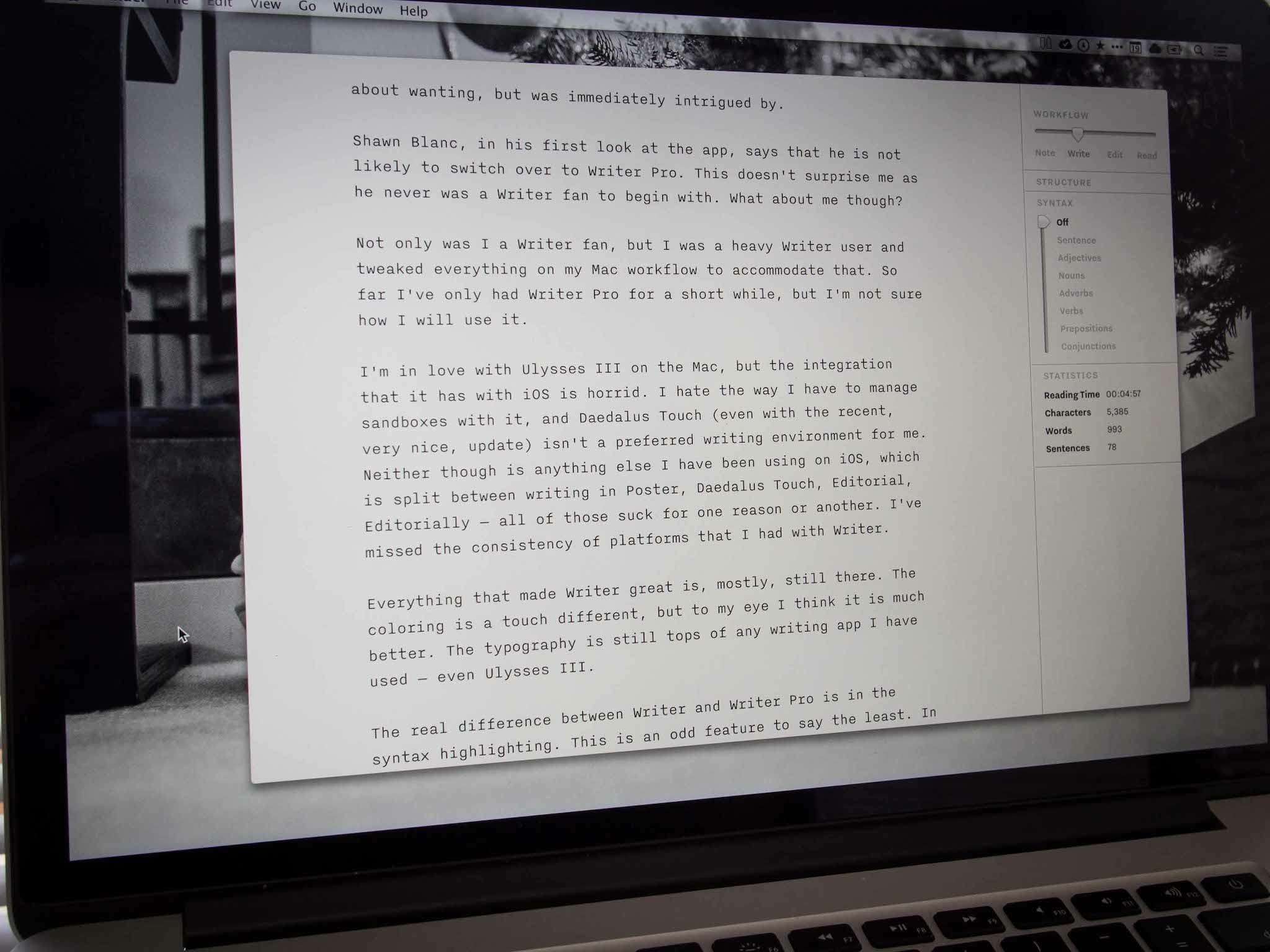 So [this is Writer Pro](http://writer.pro). It looks nice enough, but not nearly as stunning as the original Writer (a tool I used exclusively when writing for quite a while). Still, $40 for a new writing application — one that has no Dropbox support — is bound to draw criticism from many, so is it worth it?

There’s of course new features, the hallmark feature being the syntax highlighting mode. (Something I’ve never even thought about wanting, but was immediately intrigued by.) But otherwise it looks the same…

Shawn Blanc, [in his first look at the app](http://shawnblanc.net/2013/12/first-thoughts-writer-pro-ios/), says that he is not likely to switch over to Writer Pro. This doesn’t surprise me as he never was a Writer fan to begin with, but what about me?

Not only was I a Writer fan, but I was a heavy Writer user (and tweaked everything on my Mac workflow to accommodate that). So far I’ve only had Writer Pro for a very short while, but I’m not sure how I will use it long-term. I’m not immediately enamored or blown away by it like I was with the first Writer.

I’m in love with Ulysses III on the Mac, but the integration that it has with iOS is horrid. I hate the way I have to manage sandboxes with it, and Daedalus Touch (even with the recent, *very nice*, update) isn’t a preferred writing environment for me. Neither though is anything else I have been using on iOS, which is split between writing in Poster, Daedalus Touch, Editorial, Editorially — all of those suck for one reason or another. I’ve missed the consistency of platforms that I had with Writer. 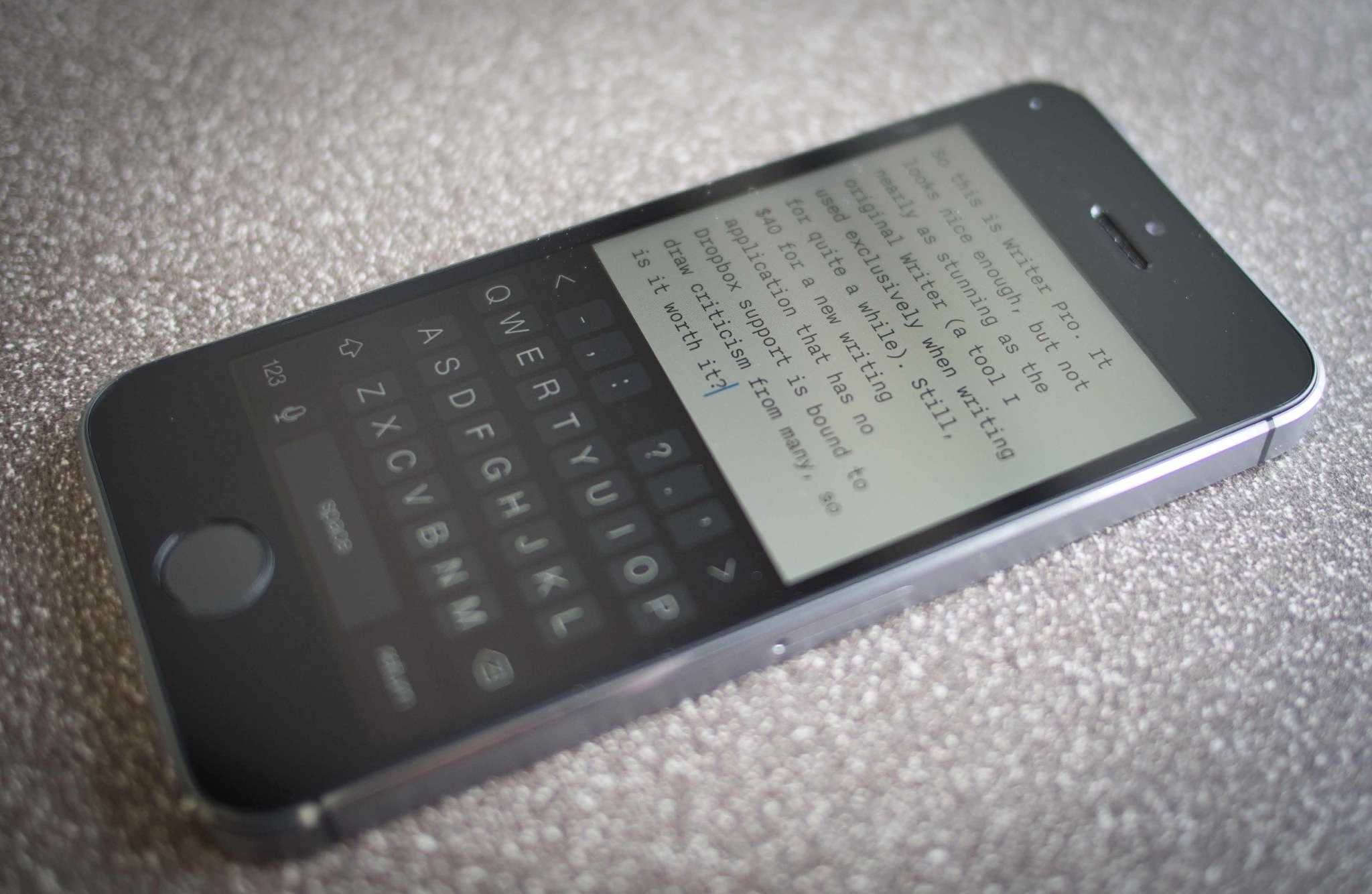 Everything that made Writer great is, mostly, still there in Writer Pro. The coloring is a touch different, but to my eye I think it is much better. The typography is still tops of any writing app I have used — even Ulysses III.

The real difference between Writer and Writer Pro is in the syntax highlighting. This is an odd feature to say the least. In Writer you could enter a focus mode where all text except the sentence you are currently working on is faded back a bit. This is now part of the new syntax mode and is labeled as “sentence” (shocker). However Writer Pro brings some additions (as you have likely seen), adding: adjectives, nouns, adverbs, verbs, prepositions, and conjunctions to the mix. Toggling between them effectively does the same trick as with sentence mode, but highlights *all* words in the selected categories.

Clearly I am not a trained writer or journalist. I couldn’t tell you the last english class I took. ((Makes sense now, right?)) But honestly I am not sure if there is some underlying logic I am missing with these highlight modes, or if it is all marketing. I have been flicking them on and off to see what I can discern and I am still not sure of the value.

I *assume* the benefit is to help show how stuffed and repetitive you may be, but again this is lost on me. So if syntax highlighting is the premier feature of Writer Pro, then I see no reason to be enamored — certainly I will use it to see if it makes my writing better, but I still don’t get it (and I won’t pretend to get it either).

For me the best feature of Writer Pro is the four states of working that it offers: note, write, edit, read. From the videos I thought this was a way to keep versions of the same document, and then in someway move between them, but that’s not the case. When switching between these modes you are actually just toggling a view/style change in the app.

Each mode has a different font (though I think Edit and Read are the same fonts) and a varying cursor color. And if that was all these modes did it would be another underwhelming feature, but it does a bit more that I find pretty neat.

A lot of people have been, and will be, complaining that Writer Pro lacks Dropbox sync. In fact, Writer Pro lives in iCloud — I am a big fan of iCloud over Dropbox — so for me this wasn’t an issue. The documents are nicely presented in iOS with the four workflow states acting as lists of sorts, which allow you to view all documents in note mode together, while stashing away those you may have in edit mode. It’s a nice way to keep your app from overflowing with documents — something that I have always had trouble with. It seemed like Writer Pro was just attaching some metadata to detect which file was in which state, but that’s actually not the case.

It wasn’t until I installed the Mac app that I saw the power of this tool — and saw how this is a great feature. When you open Writer Pro on the Mac you get the standard OS X iCloud file picker — except you will see four “folders” in your iCloud account labeled: Note, Write, Edit, Read. 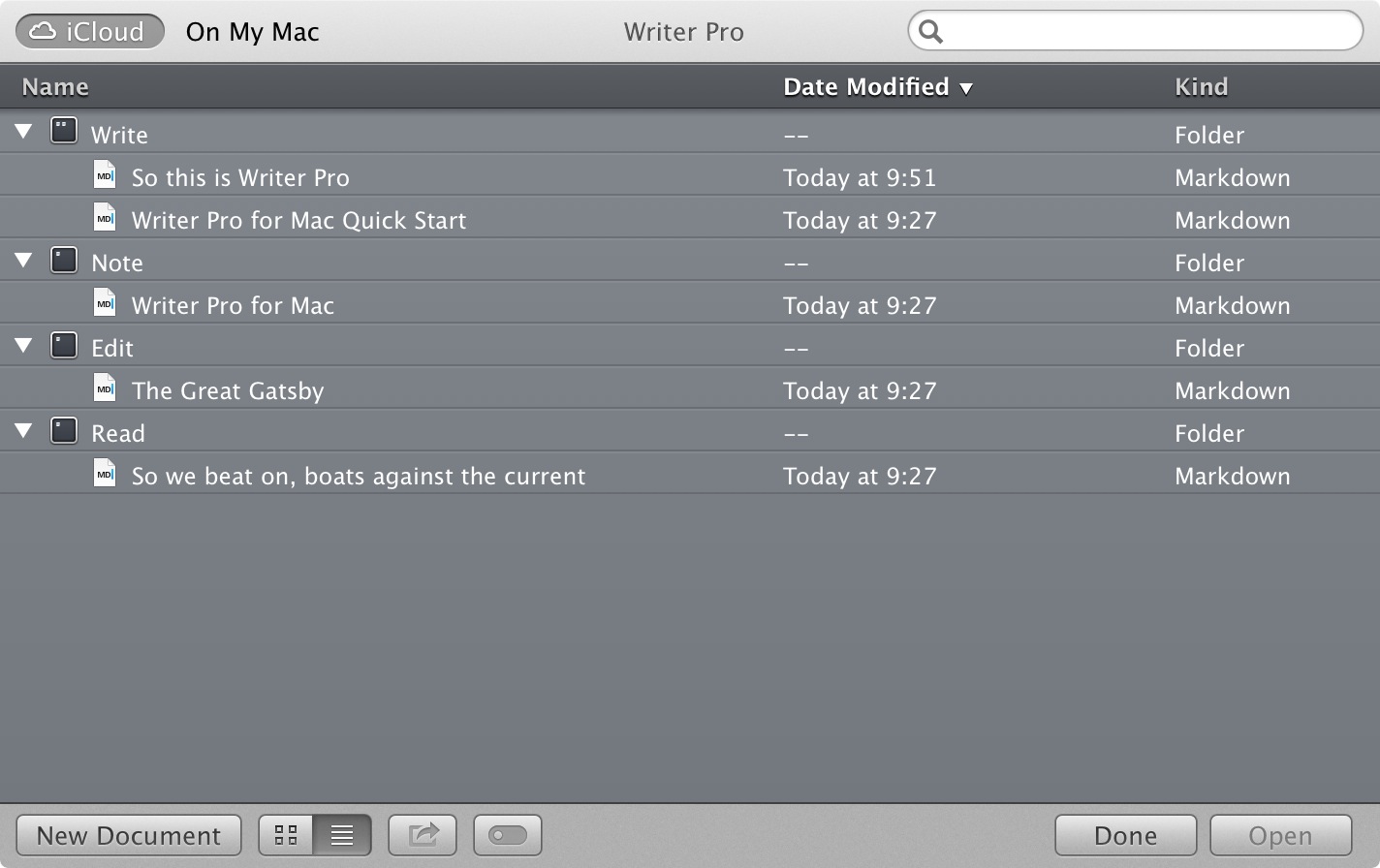 Managing files in folders, and using tags, has always been cumbersome for any user, but what Writer Pro has done is exceedingly clever: they have created a slider for each document that moves the document location for you. While the user moves a documents from note workflow to write workflow — the app moves the document to the corresponding folder in iCloud. To me, that’s a bit of magic — and the outside the box thinking that I expect from iA.

These moves are seamless and unseen to the user so effectively iA has recreated the hidden folder system that they use on iOS, on OS X. It’s a very slick setup. 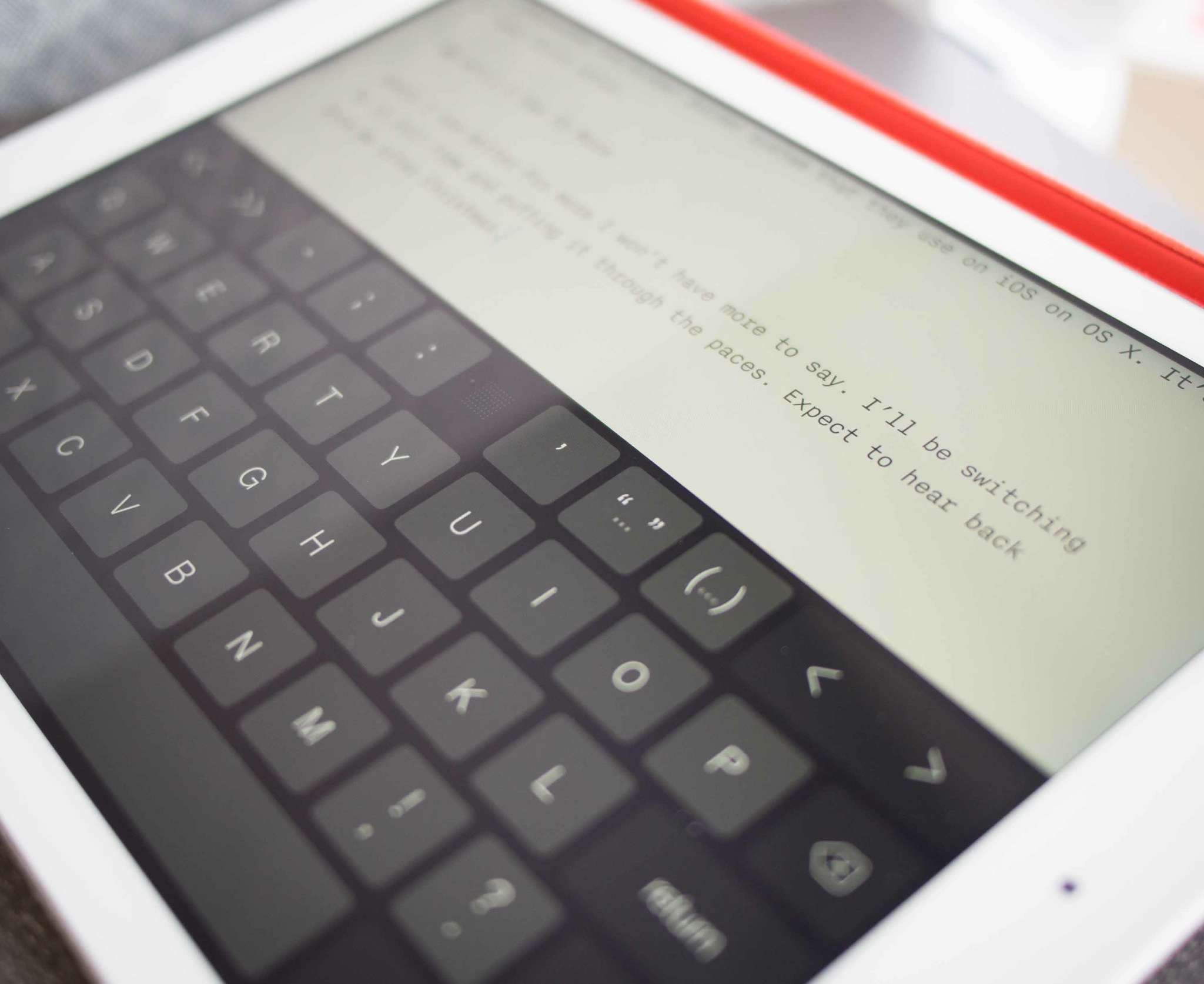 Until I use Writer Pro more I won’t have more to say. I’ll be switching to it full-time and putting it through the paces. Expect to hear back from me after Christmas.

– I’d guess that Dropbox support is forthcoming, if I recall correctly they did the same thing with the original Writer app. This is purely a guess.
– There’s no internal versions within the app, so that’s a major bummer if you were hoping for track changes.
– Likewise there is no collaboration feature, so Editorially is still your best bet by far.
– There is no publish feature, which I find silly to omit at this point. What’s the point of a writing app if you can’t do anything with those words once you are done?