I hadn’t touched my contexts inside of OmniFocus in, well, years. There was a ton of cruft in there stemming from various different techniques and ideas that I have tried over the years. Device based context, person based context, time based contexts, and location based contexts. For the better part of a year, all of my new tasks in OmniFocus simply went under the Mac context and — well — that’s not really using the tool very well.

But I struggled, because dicking around with my contexts is not productive, is tedious, and frankly it is quite annoying. More than any of that: I didn’t have a single idea of what to change it to.

And then Shawn Blanc showed me the light:

Urgency in and of itself is not a problem. The problem is when we find ourselves craving projects, work environments, and scenarios where there is a fire to put out. And thus we never have the time to do the important task which doesn’t have to be done today.

(Do read Shawn’s entire post, it’s hard to get a sense for it in just one block quote.)

All of a sudden it clicked: I should just have two contexts. One would be Urgent and the other would be Important.

Obviously that was rather ambitious, but I took my 30+ contexts and whittled them down to just six: Important, Urgent, Goal, Writing, Minutiae, and Waiting. Some of these may seem like they overlap, which is why I want to explain them a bit further. 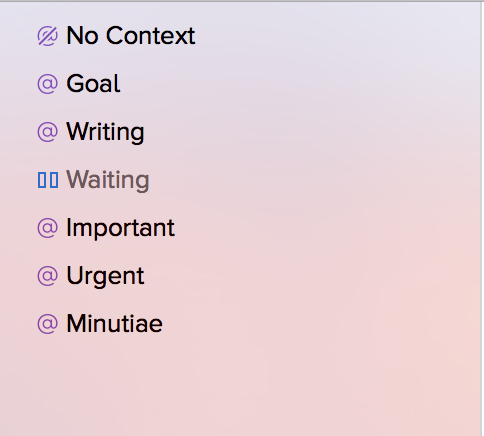 Before I dive into each, it’s important to point out that the end goal of this entire setup for me was to create a system where I was forced to make harder decisions about the things I put into OmniFocus, so that I can better grapple what to do next. I wanted to put the thought into the task importance when I input it, and not when I went to do it.

This is the stuff that matters.

Important and urgent are vastly different things. To me urgent means: “calling for immediate attention”. Whereas important is: “carrying or possessing weight or consequence; of valuable
content or bearing; significant; weighty.” ((Both definitions from Webster’s 1913 edition. Should note that important also carries the same meaning as urgent as defined on it’s 4th meaning.))

Such as: send out TPS reports.

That’s a non-insignificant amount of work, must be done otherwise I have to come and work on Saturday, not to mention for me to keep my job. So, it is urgent because I have to do it, but not important because I certainly don’t want to do it.

Now, not all goals are that grand in nature. I have a list of books I want to read, each as a Goal. I have items around my house that I want to fix, all as goals.

In short: things I want to do, but not that will ever have a timeline associated with doing them. If I accomplish them: awesome. If not: no big deal. ((You can argue that’s not how I should look at goals, I would argue back: reality.))

This one is pretty obvious: it’s for anything I want to write. The real question is: why isn’t this just under important?

The answer: if I want to see all my writing tasks, I don’t want to be overwhelmed with all the other tasks I labeled as important. So I added this context strictly so that I can get better sorting.

I could add this as a sub-context of Important, but that looks too untidy in the OmniFocus UI for my liking and slows me down when adding new tasks. You’ll notice that almost all of my contexts don’t start with the same letter, making adding contexts to tasks much faster.

This is more or less those annoying little things that have to be done, maybe you don’t want to do them, but also the world won’t end if you don’t do them. Whew

This is another context that exists just for sorting. If I assign out a task, but still want to track it — or if I can’t start a task until I get something — it gets this context. That way I can look at the entire list to see who I need to bug and about what.

It’s what keeps things from slipping through the cracks, as they say.

This entire system is part of a larger refocusing that I have been working through the past year. More than that, this focusing of my context system is a direct result of having taken Shawn’s Focus Course.

These changes may seem small, but I can assure you they are very powerful small changes. I still look at my tasks mostly from the forecast view, but now I don’t have to question what is the priority of things, as the context gives me that — wait for it — context.

DROPS MIC, it rolls off his soap box and kills an ant. Poor ant.