If publishers would have known what they do now when they started on the web, it would be a better web.

There has been a lot said over the years about publishers trying to make money in the changing landscape that is their online world. It is also no secret that I loathe advertising. Where advertising was once an exciting art form, it has now devolved into a creepy data driven model which is unapologetic for its invasive nature. But that is not what we are hear to talk about today.

We are here to talk about the fact that publishers never really took the Internet seriously, and so they made bad decisions which ultimately cornered them into using a foundation which was unstable at best for building their business on. And now publishers only focus on making advertising better, instead of tearing everything back down to its very foundation and starting over.

Which is why they continually struggle.

Advertising has been a corrosive force for journalism in general. I can picture the scenario at early meetings over newly formed journalism websites.

“How do we know if the website is worth it?”

“Well we have a system which tells us exactly how many people visit the site.”

“And you can sell advertising based on that, as advertisers will pay per ‘impression’.”

That all seems harmless to think back on, but if this is the foundation you build a site based on then it can lead to disastrous results down the line if the thinking doesn’t change.

What happens is executives become obsessed with the numbers and begin to lose site of the offering. The sites shift from catering to the readers and what they want, to catering to the advertisers who pay the bills. What this looks like in practice is less original content, more short snippets of things. List posts, syndicated content, and of course opinion posts.

Opinion posts? Think about how easy they are to produce. They require no fact checking, they require no investigating, no confirmations from sources. They can be written by anyone who can form somewhat coherent sentences. This is cheap, unique, and fast to produce content. Which is why it is preferred and why it is everywhere.

The foundation of most websites is page views in exchange for money. Readers won’t come back if there isn’t new content. So there must always be new content regardless of whether there is reason to push new content. But how do you get that much new content when your history is using reporters on the ground to report on the day’s news? And to form opinions through deep investigative journalism. Where it could take days, weeks, months, or years to produce one outstanding piece of work, how does that work in the face of needing content now?

You can’t support that type of content any longer, not on the foundation you have laid out for yourself. Which is why we move to AP content, opinion articles, lists, and smaller and smaller content. Regurgitation and bullshit, instead of reporting and investigating.

It’s a failure of service to all readers.

And so the readership begins to fall across these publications. Both online and in print. The content is no longer there to justify the expense. You can find it anywhere else, for free. And what you cannot find elsewhere, the opinion posts, are of such low value the reader doesn’t even factor them into the decision.

With declines in readership comes declines in page views and declines in revenue. So what do you do? You look at metrics and realize that the shorter posts get more readers, and page views per reader could be increased with more short posts. Now you don’t have to gain readers, you just have to better leverage the current readers you have.

More content of lesser quality comes flooding in. And for a while this works. Then it falls flat on its face once readers realize they are being duped into reading ever shittier content.

Ads aren’t broken, because they never actually worked well to begin with. The entire model is broken. Everyone has always taken the easy way out of either paywalls or advertising.

Advertisers want sites which draw the smartest, most wealthy readers possible. Sites want to to draw whatever advertisers want, but with little risk and little expense to them. Readers, especially the smart and wealthy ones, want the best content they can find — wherever they might find that content.

Let’s take The New York Times and the recent tragedies in France and see what the Times is doing. The NYT made a big deal out of dropping their paywall so that everyone is able to stay up to date. But what does that really mean?

It means you are greeted by this page: 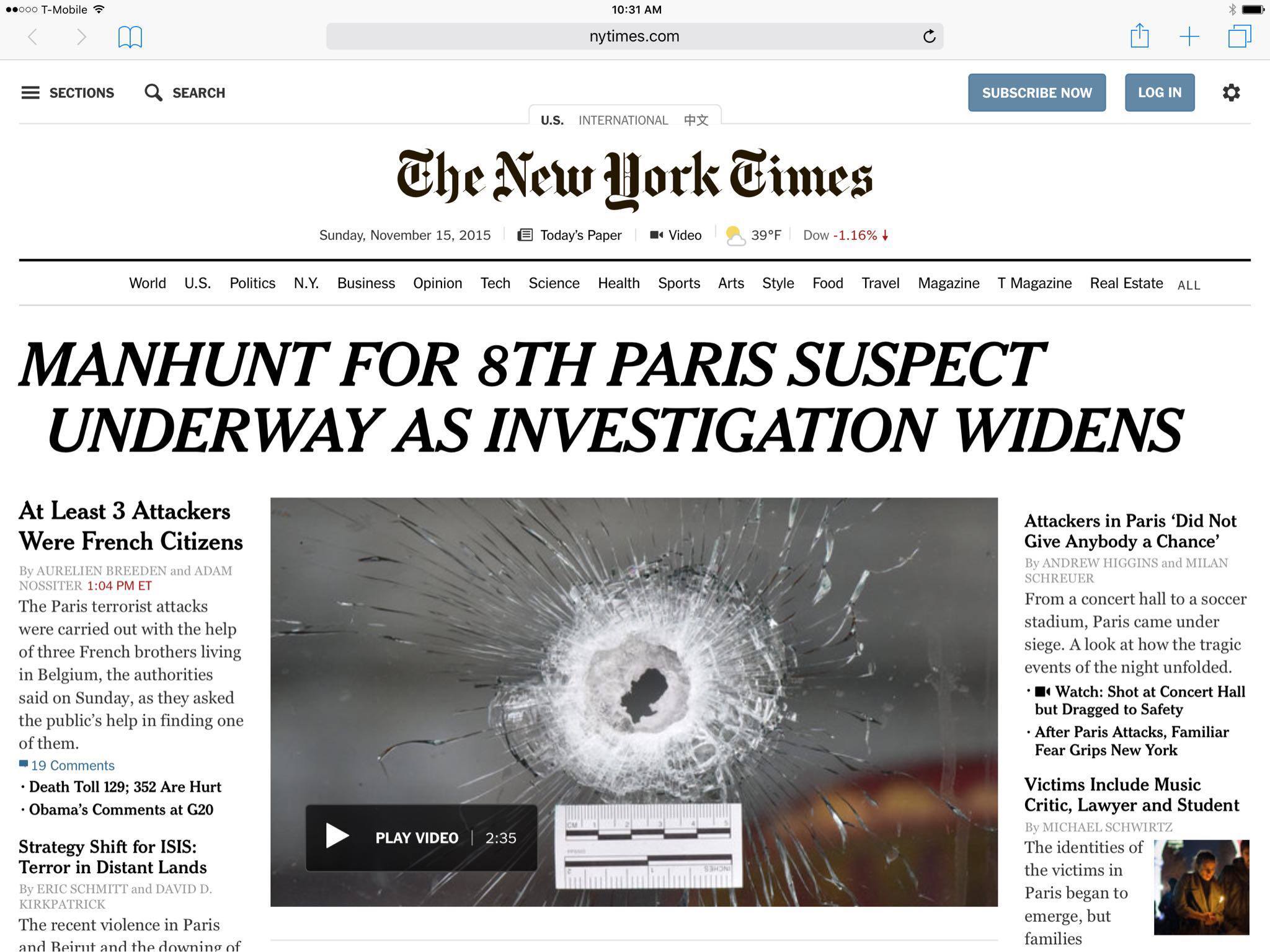 Where do you go here? What’s the definitive article on this page to cover the tragedy? All I see is a ton of articles telling me one piece of the overall story. It feels broken apart in an attempt to not only fill the page, but to drive page views per reader.

There are 11 articles to open and read about the attacks, three of them are clearly labeled as ‘fiction’, whereby I mean ‘opinion’ articles. And then there is a small note reminding readers of the charity the NYT is doing by having removed their paywall temporarily — spoiler if a charity has to remind you that it is a charity, then it is very much not a charity.

Anyways, what do we learn from these articles if we take the time to read them all?

If you trudge through the posts, you begin to see that even those not labeled as opinion, are largely opinions about the political aspects, and terror aspects of the attacks, with some talking about ISIS. And after you wade through the mess you are left with just three posts which are actually informative and not mostly bullshit regurgitating the other posts. So three posts, and they are each very different.

The first is a very short, fast read, which walks you nicely through the raw events. 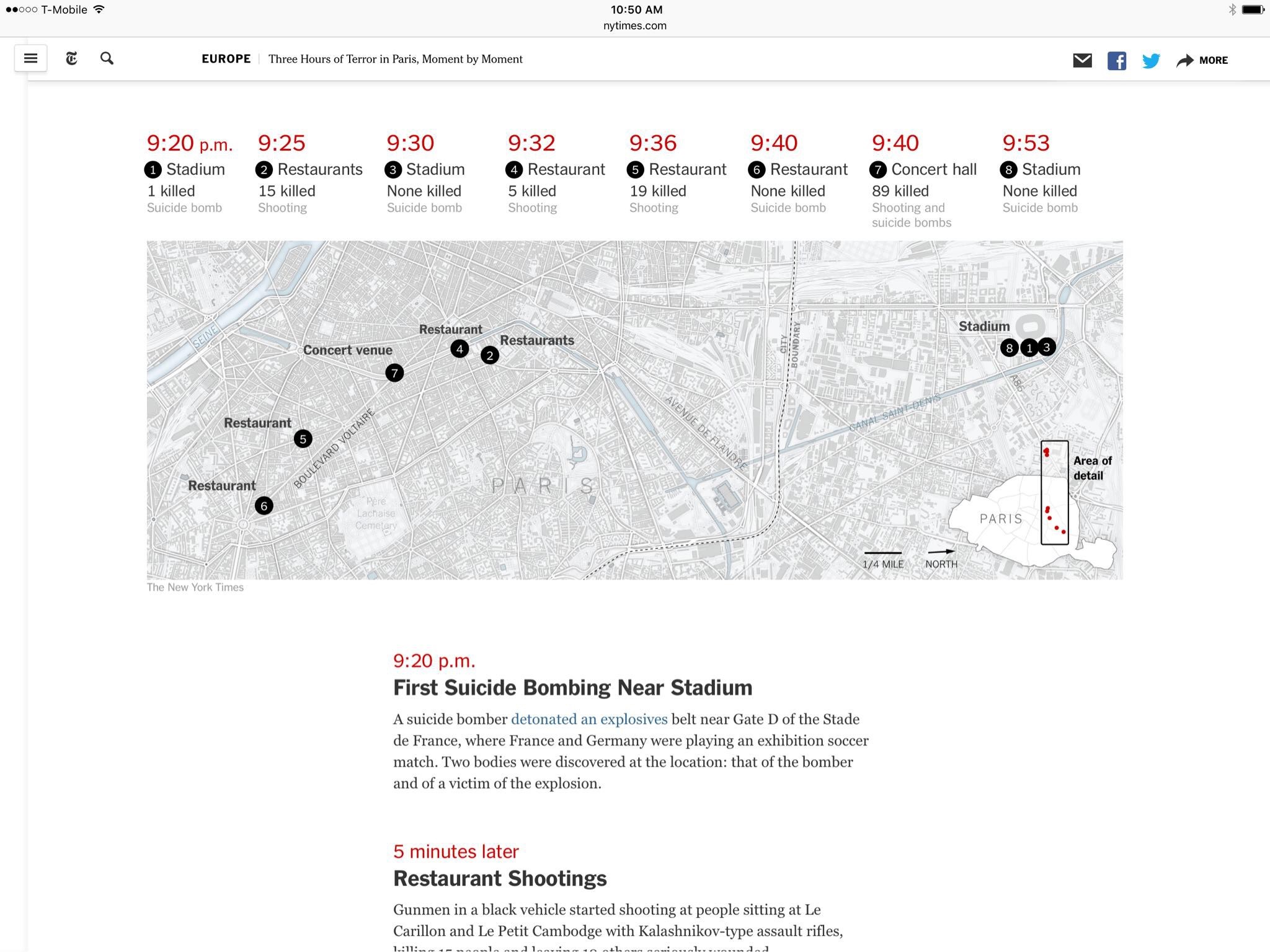 This is an informative and short post and a great example of providing a reader with facts.

The next post is another excellent primer walking a reader through what facts are known, and which are still unknown.

The third post is the weakest of the lot, and is typical of most news articles. Here facts, interviews, and opinion is all wrapped into one tidy story. 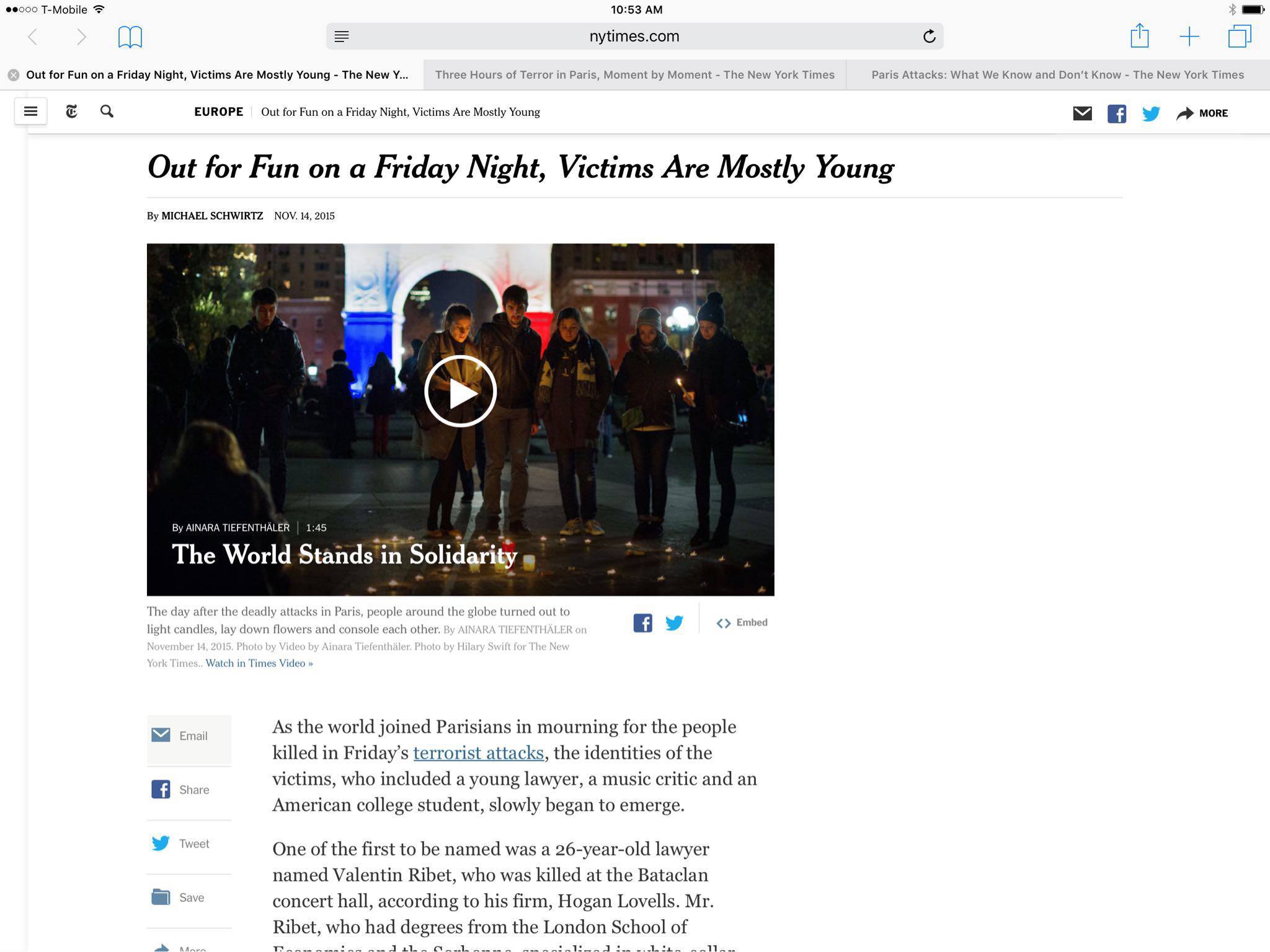 Each of these posts contained many ads which the Times very much did not suspend for charity (but which cannot be seen in my screenshots because of ad blockers). Out of the 11 which were on the front page for the publication, we were left with 3, maybe even just 2, which were actually helpful and the type of content savvy readers are looking for.

This is the problem. I would not have taken the time to find the good amongst all the shit if I had not been writing this article. And I am a news junky.

Instead I would just wait another day for a smaller site to publish a well reported piece on the incident. It’s not that what the Times had was bad, it’s that the good stuff is buried beneath and between a bunch of other crap. Had they put those two or three pieces front and center and told me to start there, I would have been hooked right away, instead of confused and wanting to leave the site as fast as I could.

The way the information was presented, and is presented on most websites, is to prioritize nothing but the newest information. Letting the reader click around to find what they really want, because this drives more page views ((Essentially people will always find new things to click on when they show up.)) and makes advertisers happier.

Or so goes the logic.

Imagine if the main page of the Times was really charitable. It would have consisted of two main articles, provided front and center, and in full: the timeline of events, and what is known and not known. That would be followed by the typical shorter grid layout of all the surrounding articles the Times is producing about the tragedy.

Imagine how compelling this would be: 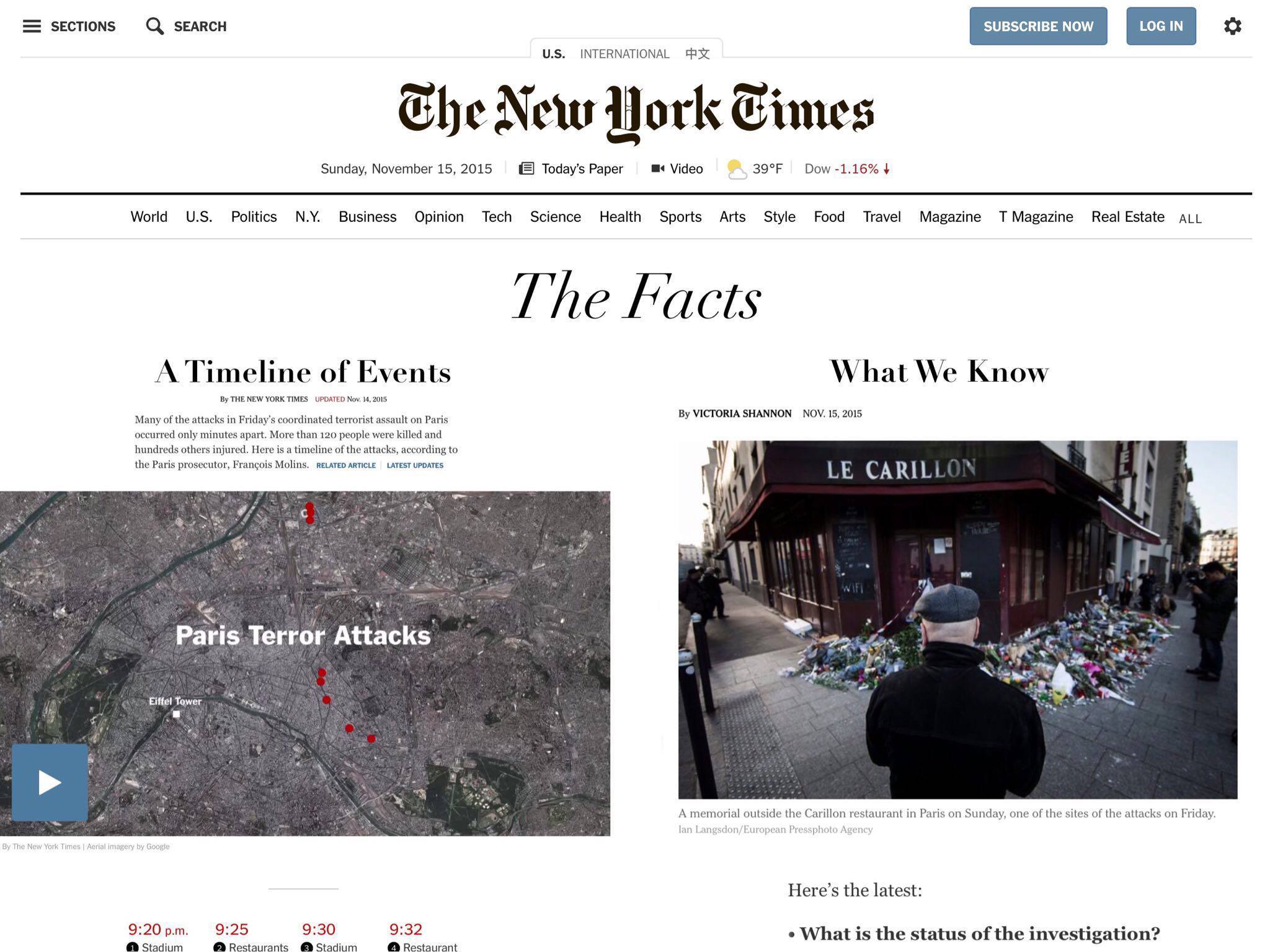 This type of layout clearly puts the readers first. It offers respect for their time. It tells them to read these two things to be informed, and there is more further down if you still want to keep going.

I would pay for content consistently laid out like this. With priority on accurately informing me, instead of overwhelming me with all the things you did in the last hour. I suspect I am not alone in being willing to pay for something like this.

I won’t deny that making money online is difficult, but you also cannot say that it is impossible. There is also not one magic solution to this problem. There’s a myriad of different options, which may or may not work for any given publication.

What we can all agree on is the model as it currently exists is broken. At a very basic level it is pushing publishers to publish things which no one wants to publish or read. It needs to change, and the best way to do that is to tear it back down to the ground and start with an entirely new foundation.

We would all be better off for it, even the fucking advertisers.