It’s a solid knife, but nothing revolutionary.

It’s likely no surprise to readers of this site that my love for knives is not just limited to pocket knives and survival knives, but also to the two kitchen drawers I have stuffed with kitchen knives. I want to talk about the Misen knife, which had a well funded Kickstarter campaign. The sell is this: it has better steel, it has a better edge, superior design, free sharpening for life, and all at a very affordable price of $65.

It’s a really good pitch, and I backed the campaign because I wanted to see if the knife really lived up to the hype. I know a lot about knifes, but not as much about kitchen knives. I did, however, immediately recognize the steel this knife is made from: AUS-8. Let’s just say that as steels go, it is middle of the road and a steel I would personally stay away from in pocket and survival knives because of its rather run of the mill qualities.

But a kitchen knife is more delicate and used differently, so perhaps it is better for that? I actually don’t know because information on this subject is scant — further, other knife manufacturers don’t really specify what steel they use as clearly as pocket knife companies do. Some just seem to make up some name for the steel they use and claim it is amazing. I found this research frustrating at best.

But why does this all matter? If a knife is sharp, that’s all that really matters, right — but that’s not true at all. The actual sharpness of a blade is only one small component of a blade. A far more important attribute is edge retention. In other words, it doesn’t matter how sharp a knife is, as much as it matters how long a knife stays that sharp. If a knife slices through a tomato like butter on the first cut, but doesn’t on the second, then it’s a terrible knife.

Now, kitchen knives (if handled properly) tend to dull much slower than a pocket knife. You simply don’t cut things which are that hard. There are other things which play into this including knife shape, and handling, but edge retention is always a big deal. Which is why the overall lack of information on kitchen knife steels is frustrating to me. 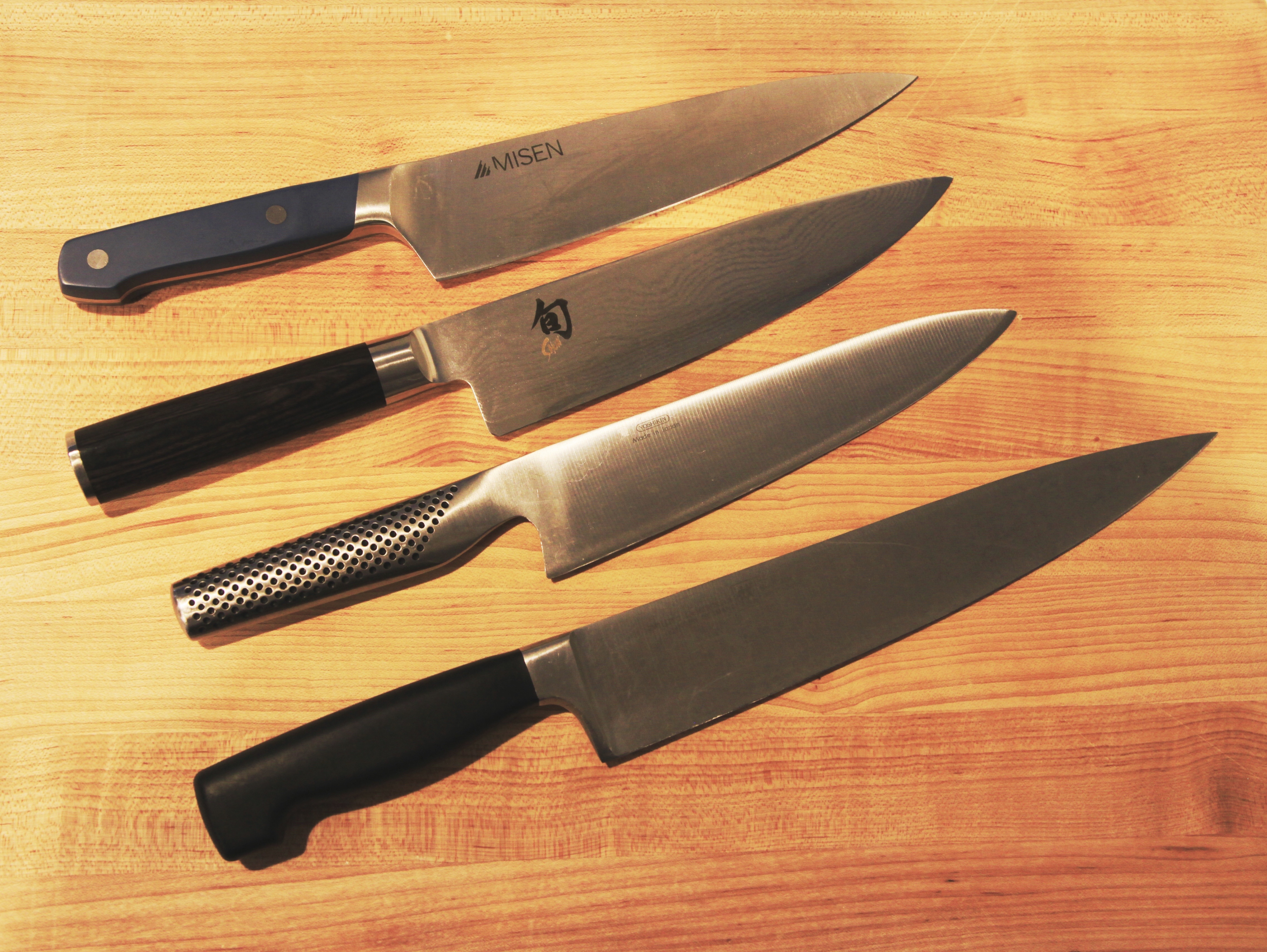 Before we go any farther, I need to lay out some comparison knives — lucky I have a few. Here’s the list of the knives we are going to be talking about:

These are all the classic chef knife shape, and the same size, with the exception of the Henckels which I oddly own in a 10″ variant. I do a fair amount of cooking and knife work in the kitchen on a daily basis, so I simply rotated through all the knives over the past two months to get a feel for each.

Of all four knives I greatly prefer working with the Global knife. Both aesthetically, as well as weight and handling, I think it is the best knife in my drawer — certainly the one I gravitate towards whenever I cook. All of the knives seem to hold an edge just as well as any other — I could not discern any difference amongst them.

But what about the Misen (it’s $65 and thus cheaper than any of the knives on this list)? I felt it was round about average among the knives, and I was torn between ranking it last, or ranking the Henckels last — likely because the Henckels is just too large for most activities.

The Misen is as classic and plane Jane as you get in a kitchen knife. Misen can wax poetically all day long about superior design, but I didn’t notice a single thing about a better design in use.

It’s a good solid knife, but nothing special. 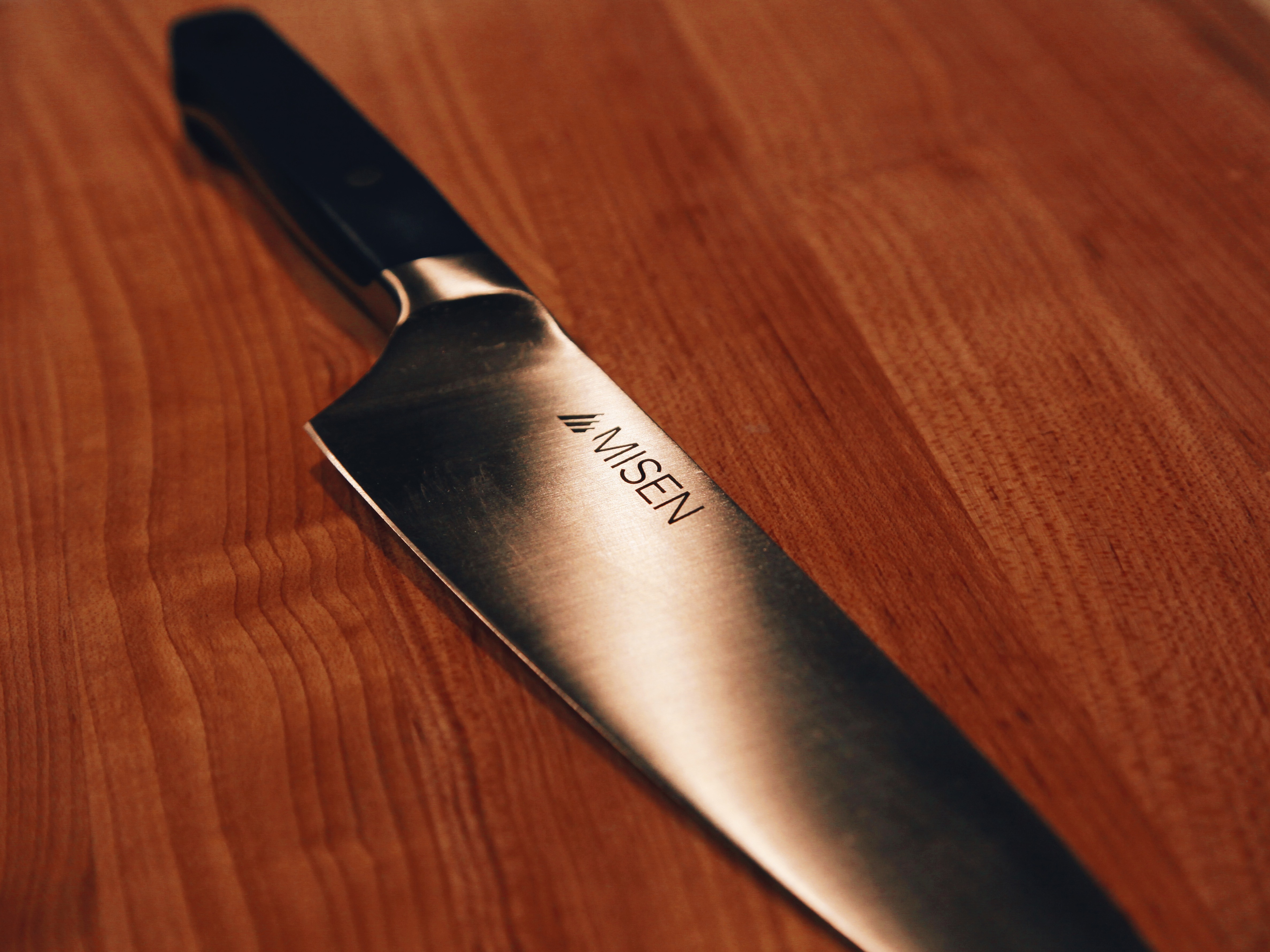 If you don’t have much interest in cooking, or you have nothing in your kitchen — then the Misen is a really good option. Don’t put any stock in their “free sharpening” plan though — that’s a gimmick a lot of companies use. At the end of the day you aren’t going to ship off your knife for a week to be sharpened, it’s just not practical. (They have not actually detailed out a plan for this, but typically you mail in the knife, they sharpen it, and then mail it back.)

If you have nice kitchen knives already, move along. There’s nothing to see with the Misen. Your money is better spent on knife classes.

I know a lot of people love the Shun knives, but I honestly think the Globals are better, and they are certainly cheaper — they are what I would recommend if you want to have a nice set of kitchen knives.

As for the Misen: it’s a starter knife for someone building up their kitchen tools, but it’s nothing to write home about. I would guess at that price point, it’s probably one of the better knives you could get.