Testing the latest version of one of the best small backpacks out there.

I’ve long been a huge 10L Bullet Ruck fan, as it is a fantastic backpack for the size. Well made, and sized to both be small, but not look stupidly small on a person’s back. This is such a hard balancing act that the Bullet Ruck is the only backpack I have found under 20L which can pull this off for me. That includes GORUCK’s own Echo too.

So, naturally I sold my version 1 Bullet Ruck.

Why? Oh, because it has two compartments, the Internet thinks it is better than the new one compartment model. So I sold my 10L version 1 and bought a version 2 and pocketed $20 extra. Sweet deal.

This is my review of the version 2, 10L Bullet Ruck, in my main use for the bag: day hikes with the kids. In short, I think for most people the latest version of the 10L Bullet Ruck is the better ruck to buy.

The Changes aka Why There is Controversy

Ok first things first there are three major changes to the new 10L Bullet Ruck that we should go over, since r/GORUCK thinks this really matters. The changes (what version 2 changes from the first):

The item which has everyone hot and bothered is the first one: the move from two compartments to one. In version one, the compartment closest to your back was for your hydration bladder with a hydration port coming from the back top of the bag. This compartment fit the 12″ MacBook Pro really well, but limited the bag because it took away from the size of the main compartment. What people like about this, is that your bladder would never sweat or leak on the other items in your bag, because it is self contained.

The second change is the strap mounts, moving from the system used on the GR models to a far more common direct connection. In the grand scheme of things, this doesn’t matter, but for consistency between GORUCK packs this is an odd move.

The last change I think is a big one: as the bag can now roughly stand up right by itself. The bottom fabric is more robust, and like the GR models it holds the bottom shape a lot better. The trade off is that the bag cannot be flattened like the version 1 bag can be. Which makes it harder if you wanted to pack this bag inside another bag.

There are a few other minor changes like the hydration port being moved to the top, and the zippers no longer having a weather flap over them — even the front pocket got a little larger. But the three changes above are the big ones which brings us to…

Why I Was Drawn to Version 2

I was clenching on to my version 1 bag like there was no tomorrow, but each time I tried to use it, I just put it away and moved to the Outlier Quadzip instead. The problem: I never carry a water bladder, and I don’t use it to carry a laptop or iPad. I wanted a bag that would be a great “dad bag” something I could use to haul kid crap when I go out and about with them.

The dual compartment system of the first Bullet Ruck is not good for this as neither compartment has enough room for “stuff”. The version 2 appeared to resolve this without compromising on the perfect size of the bag. So I sold the version 1 and went for the version 2. 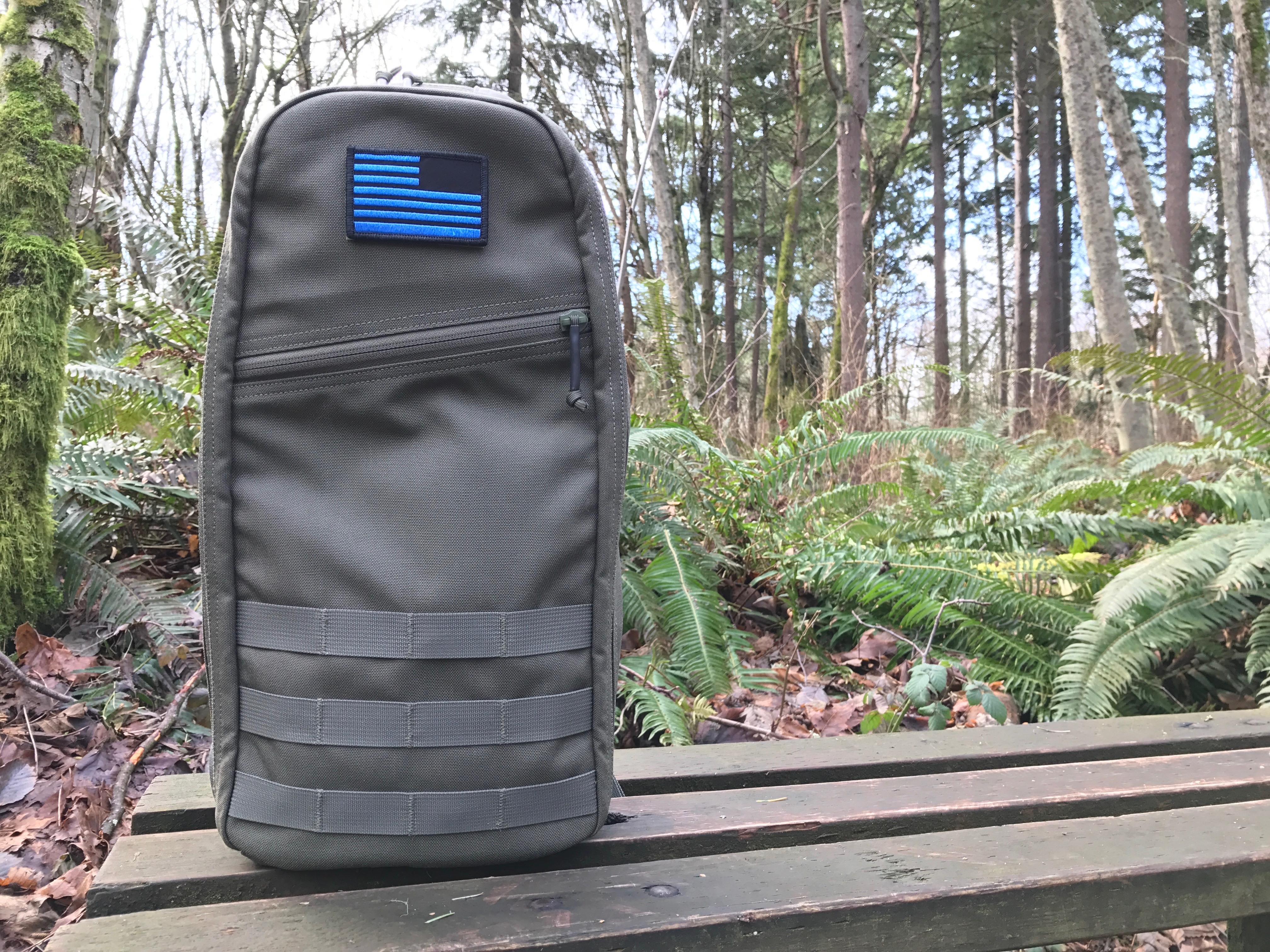 I personally really like the change to the bottom of the bag for day to day use, but I know I will lament this change the first time I go to travel with the pack. I loved that I could flatten the old bullet ruck into a larger bag and take it with me, with this new model I will need to rethink how I pack the bag. But overall, it’s very nice to have a bag with some ability to stand up on its own.

The strap change is only mildly annoying and I think overall the bag looks better in version 2 than it did previously.

The second version is simply the more versatile bag.

As a small backpack goes, I’ve yet to see anything better than this second version of the 10L Bullet Ruck. It is simply a near perfect bag, well made, and well sized as a small pack to carry around. I’ve carried both the original Bullet Ruck and the Outlier Quadzip through crowded Disney parks and I have to say: I wish I had this Bullet Ruck instead. The Quadzip was too big, and the original 10L Bullet just barely had enough room as I was always struggling with the two compartments for organization.

I want to make special note of the color I chose, as it is “Ranger Green” and not the normal black. I’m not a fan of any camouflage style designs as I like to be able to see my ruck, but I did want to try out something else this go around. Ranger Green is a newer color GORUCK has been using and I think it is fantastic.

I really love this shade of green and think it is both versatile and a nice change from black. As I mentioned in my GR1 redux-love-fest, I am now wanting that color in the GR1 as well.

As I mentioned, the 10L stuff got dusted off for me because I want to do more hiking with my kids. We recently moved, and our new home has a large state park next to it with some great wooded hiking trails. My kids are just now getting to the ages where I can really take them on a worthwhile hike (1.5 miles is typically doable). 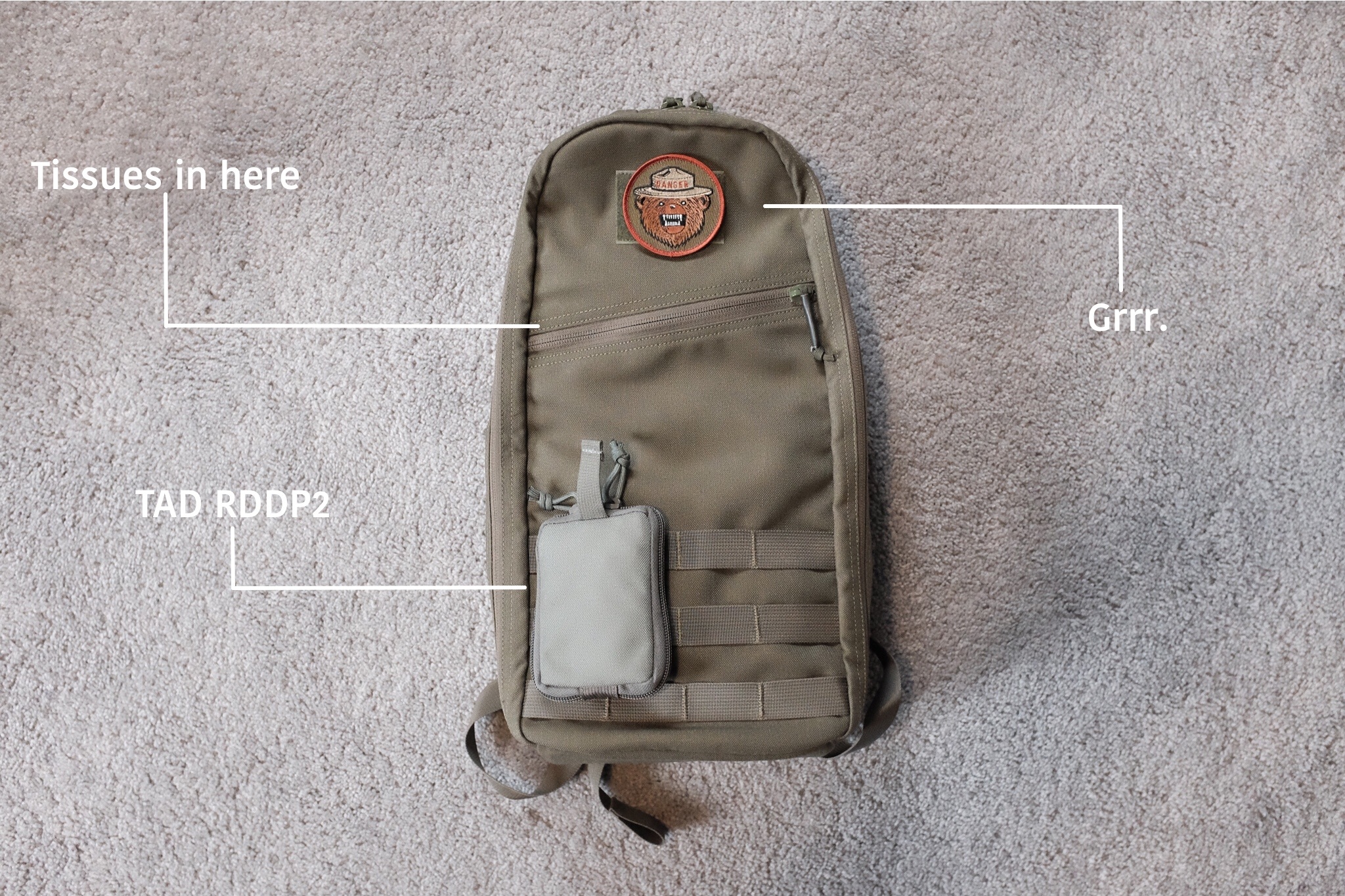 But as any parent knows, it’s not as simple as that. Aside from needing to pack a few survival items like a first aid kit, flashlight, and knife — I also need to pack in stuff to keep the kids happy. Those include chem lights (what kid doesn’t love a glow stick), snacks, water, and hand cleaners. 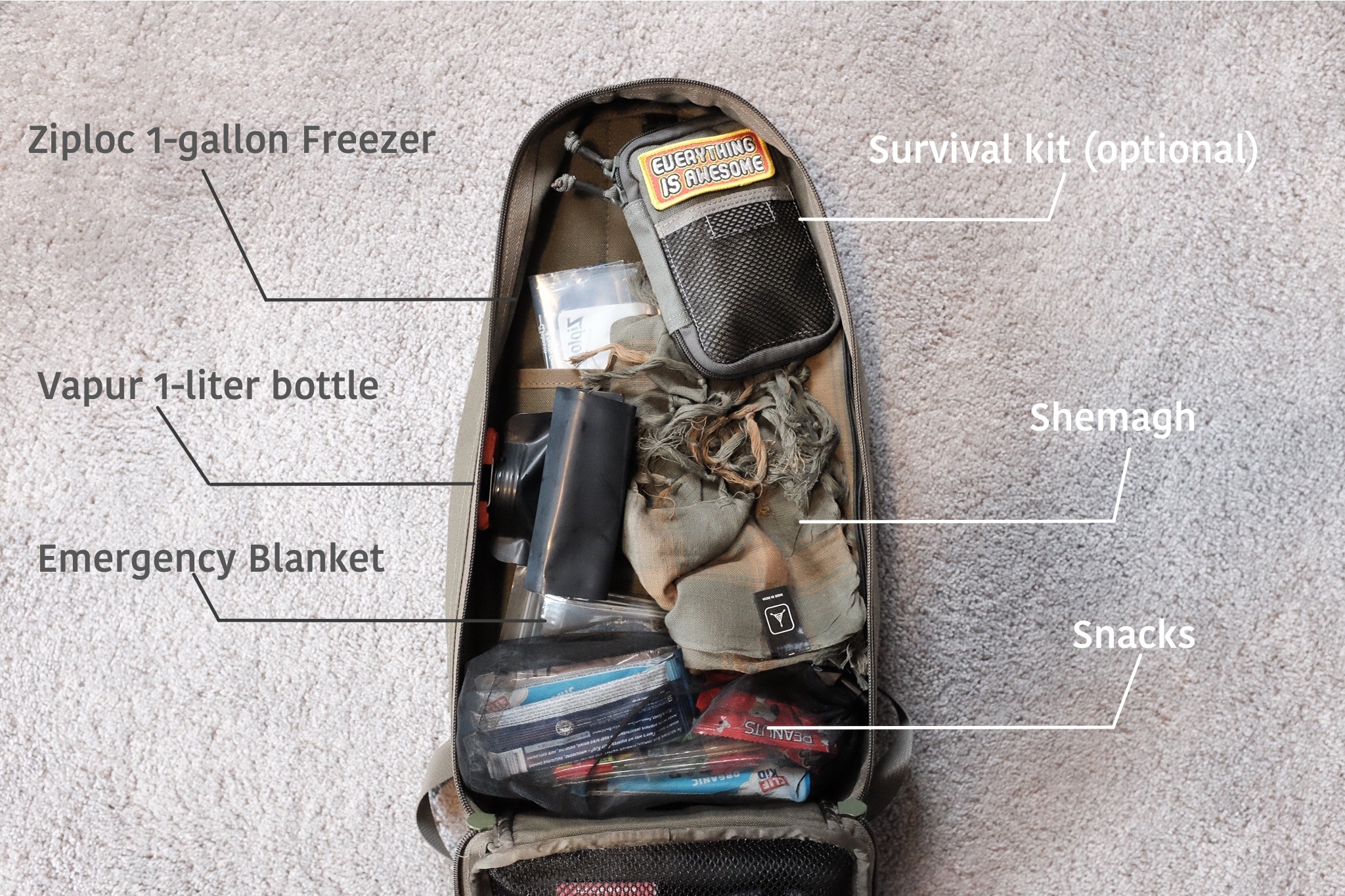 I also need to be able to carry their coats for them, and anything else they might have snuck with them that they find themselves no longer wanting to carry. There isn’t a whole lot in the pack, but that’s also the point: that I mostly need the carrying room not the stuff in the bag. Though the snacks have been used on every hike thus far. 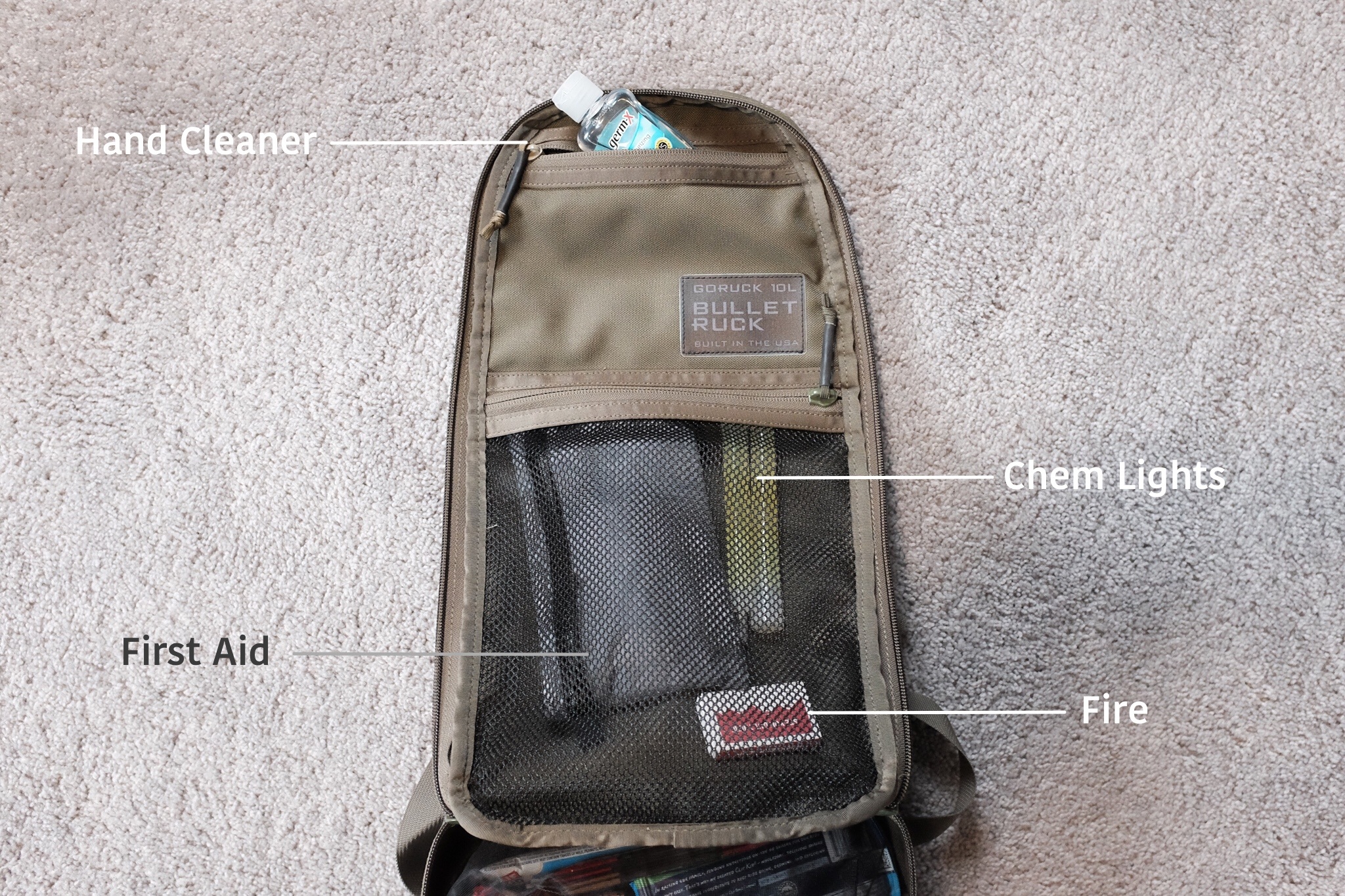 I liked the first version of this Ruck a lot, but this second version is better for every use which isn’t primarily carrying a water bladder. Even then, I remain unconvinced the version one would be better, but I can see the argument for it.

I’ve been recommending this bag already to people emailing me and asking for a good “dad bag”, because I honestly love this bag. Initially I was torn over it, but the more I use it, the more I appreciate its versatility — which is one of the very reasons the GR1 remains the best general backpack you can buy.