The iPhone X has one hell of a camera system in it, I suspect, much better than Apple leads on.

If you read this site, then you know what Apple announced about the iPhone 8 and X models. But did you catch how they described the cameras? With the standard and plus model iPhones, it’s always been a “yeah the Plus has a bigger camera”, which allows us to do something like: optical image stabilization, and then later, dual cameras. Apple always side stepped the which camera is better debate, by not saying one was better than the other, but rather that since one was larger they could add more features. But the truth was always that the Plus had the objectively, and subjectively, better camera. Hands down.

With the X, there’s an issue. It’s size is between the two devices, and it is being launched just a month after the iPhone 8 models — which are “top of the line”. So Apple can’t really say: it’s the most amazing camera ever, and they also can’t say “well because of the size it has more features”. Hell they really can’t even say that because of the price it has more features.

As far as I can tell the rear facing cameras are notably better on the iPhone X, with two important offerings: 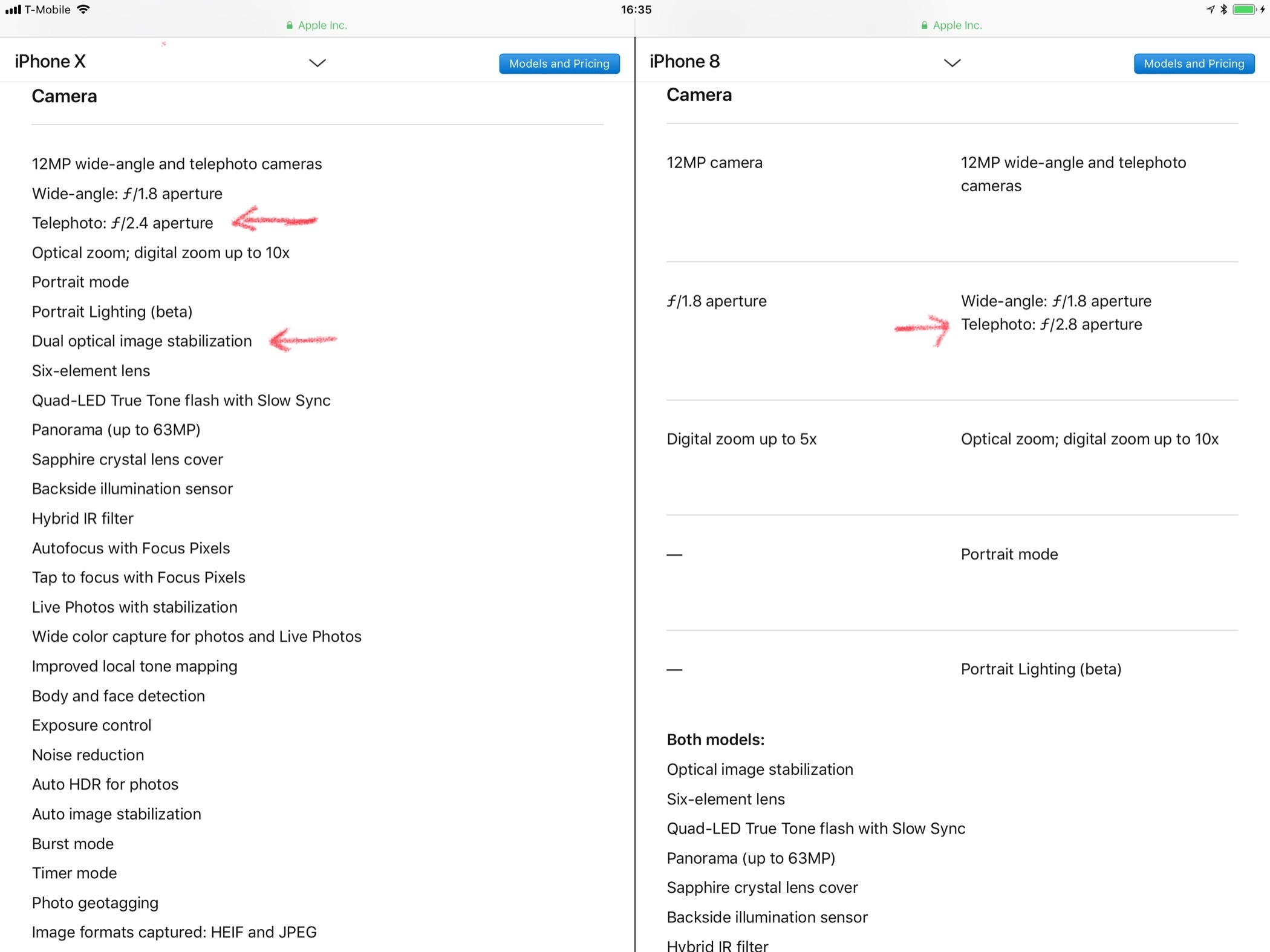 These seem like minor updates on paper, but I suspect it makes for a drastically better camera for taking photos of people, in all situations. And makes the telephoto lens on the iPhone X, useable in itself, instead of really only being useable in Portrait Mode as it stands right now.

Of course the huge camera leap comes in the front facing camera, as it gains both Portrait Mode and Portrait Lighting, but that’s far less important to me than the changes in the rear facing cameras.

All in all, Apple put themselves in a spot where they made a better camera for the X, but they can’t really say the camera is that much better without answering the question: why not put it in the 8 Plus too? Had the iPhone X been the only model announced, those new cameras would have been touted as the best cameras to ever grace a mobile phone, because they certainly are. Instead, Apple has had to dial back the narrative, while still talking about them.

Should be slightly entertaining to watch that play out.

Update: The reason, which I think I failed to properly spell out, that this is such a problem is because the iPhone 8 Plus, effectively becomes an obsolete device the moment the iPhone X was released. Normally Apple only does this yearly, but in this case they did it in the same hour. I see this a lot like the MacBook 12” and the MacBook Air 13”. You know the Air was the older-soon-to-be-obsolete option, but Apple still had to “sell” both of them. Hence, the issue.