Taking a look at a new gear organizer, which is quite a bit larger than you might expect.

I’ve been looking for a solid organizer to use in place of my other options for carrying everything in my EDC kits. The idea being that if I can keep my standard gear all in one thing then I can have only one set of gear. As it is right now, I keep an entire set of gear in each bag, since I don’t have an easy way to move it from bag to bag. Thus I either spend a lot of money buying the same gear, or I have one kit of gear which is my favorite and the other kits made up of lesser goods (which is the reality).

I’ve tried GORUCK Field Pockets and a few Maxpedition pouches, but today I take a look at Triple Aught Design’s latest offering the Context Organizer. The Context Organizer is fairly unique in this admin pouch realm, as it is expandable, able to hang with built in straps, and yet has tons of organization abilities in it. And it’s huge. 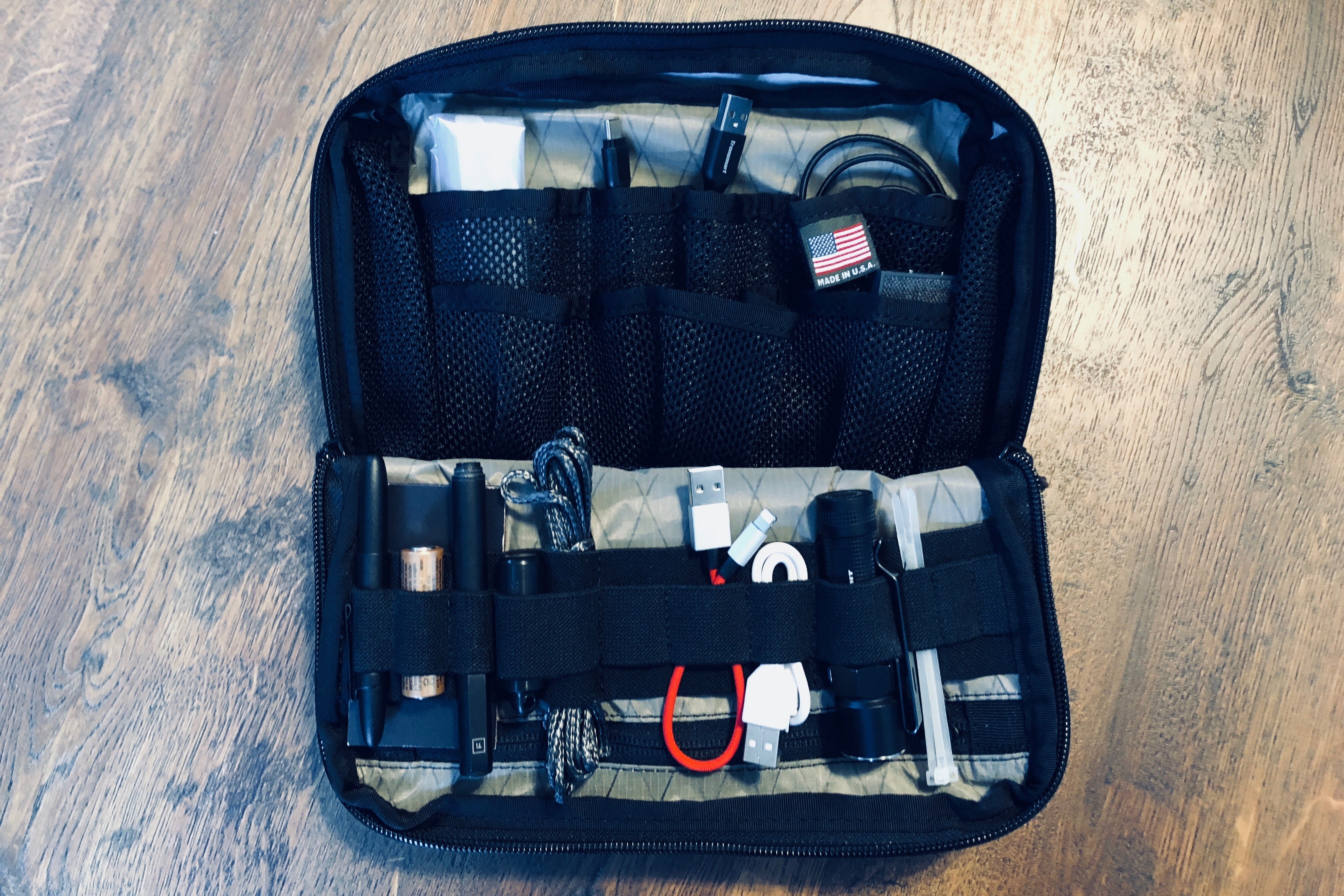 What immediately drew me to this pouch was all the elastic loops and mesh pockets — it’s a organizer which is made to work out of, instead of simply storing your kit in it. The difference is massive, but the benefit is obvious. When you’re working out of the storage container, there’s less opportunity to lose stuff or forget to put it back.

The elastic loops are fantastic, they aren’t overly burly, which means they accommodate things much better than most Maxpedition pouches I’ve tried. The sizing of the loops are also equally nice as they offer a large variety without forcing you to just have a bunch of wasted loops. One odd thing here is that the loop side is meant to fold open of sorts, but if you put something too long in those loops (which is easy to do) then the opening of the pouch is hindered. Depending on how you will use the pouch, that can be quite annoying.

On the opposite side of the loops are a series of two rows of mesh pockets. These are nice to have, but the mesh is so rugged that often things which fit end up riding too high and are prone to falling out of those pouches. These seem geared to hold multi-tools more than to hold lip balm or USB chargers. I’ve struggled to find things which stay in these pockets, which really is a fundamentally poorly designed pocket if you think about it. That said, packing those pockets with heavy items works well.

From an organizational perspective, I’ve not found a better organizer than this.

While it’s slim, it’s very large in footprint. One of the issues with GORUCK Field Pockets is how much the material takes up, so while those pockets are large, they don’t carry nearly as much as you might expect. Here, the Context Organizer is very large, but carries far more than you might expect. 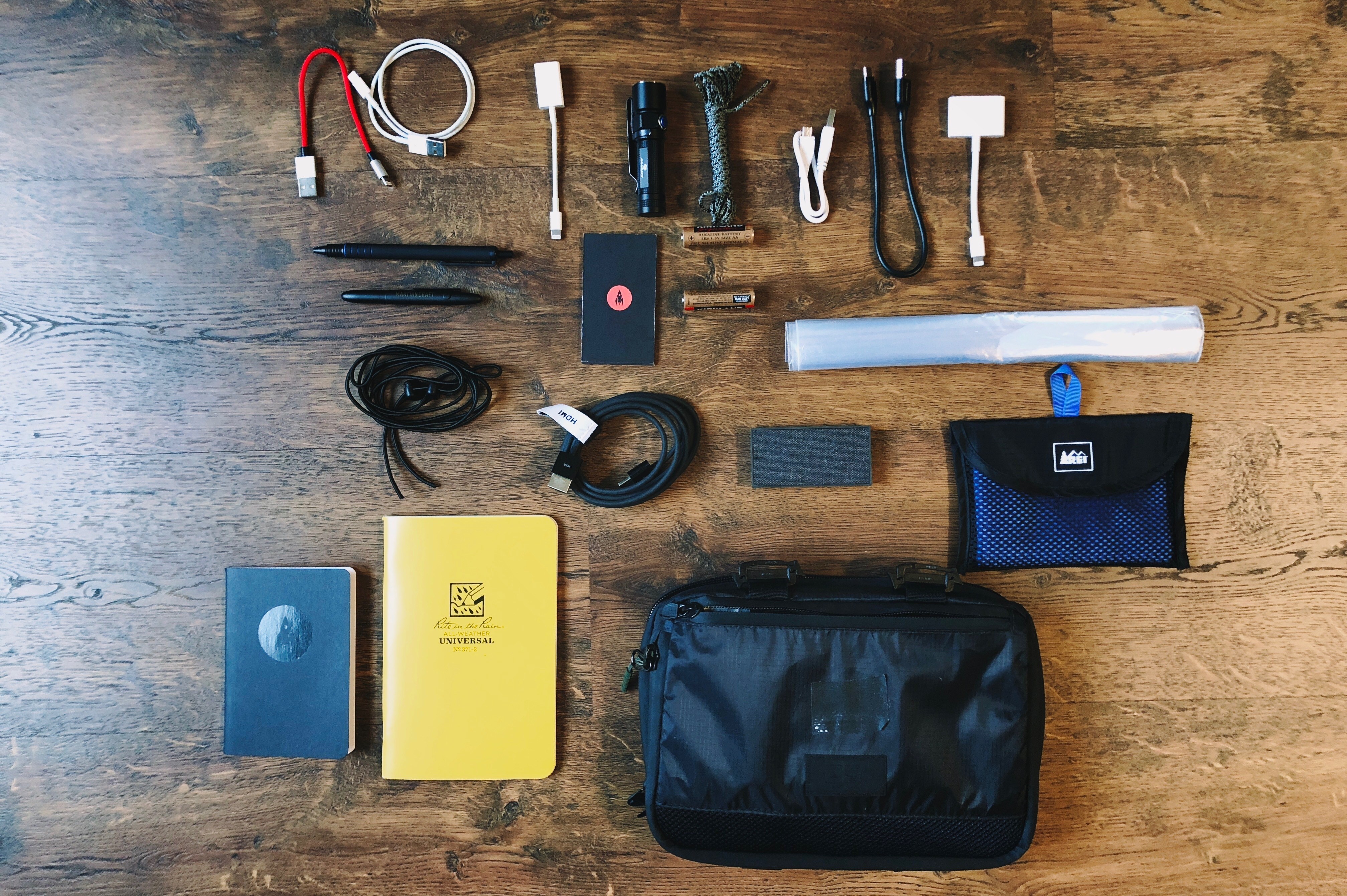 The issue is that it almost carries too much gear, and takes up a ton of space even when you don’t carry too much gear in it. Because while it is slim, the footprint is so large that it will consume a large area in any bag.

This is only exacerbated when you expand the bottom of the pouch to carry more goods (thus making it a wedge) — once you do that, you have something more like a GR2 Field Pocket, which is simply huge. The difference being that it’s not as unorganized as a field pocket, but at that point you’ve got a really large pocket.

The Context Organizer uses Triple Aught Design’s VX-03 ripstop, which is smooth nylon. It’s thin and tough, but it doesn’t feel tough like 1000D Cordura does. What’s nice is that the material lacks bulk, and holds a ton. What’s not nice is that the pouch can often look very lumpy when it’s stuffed full of gear, as the organizer tends to telegraph what’s inside of it.

The zippers are weather sealed, and very nicely done. The bag also has mesh spots, and a mesh bottom when expanded. All nice touches if you’re working in a wet environment (carrying unintended water in something like this is never fun).

There’s a rear exterior pocket where two straps come out and loop back to the clips on the pouch — this is done so the pouch can hang from a towel bar, or any other location which might be convenient to you. For me, I’ve found this is the best way to attach the bag to MOLLE or PALS webbing if you want to keep the organizer higher up in your bag.

The overall design is sleek and from the outside looks decidedly non-tactical, which is a godsend.

What I Use It For

Since getting this organizer I’ve massively struggled with what to use it for. Originally I wanted to put all my best kit into it, and use it between bags, but after using it like this for a month, it’s too large to do this. Make me one just like this, half the width, and we’ve got a winner. Until then, it’s too large for me to want to carry it most of the time — even if I barely fill it up, it takes up too much space.

Since then I’ve been using it as a purpose driven carry, and outfitting it for particular trips, but that’s grown tiring and tedious. I’d much rather keep my gear ready to go than keep filling it. (One more note here, is that one benefit of something like a GORUCK Field Pocket is that you could attach it to the outside of the bag in a pinch, but with the Context Organizer I wouldn’t trust it being secured in that fashion.)

So I’ve moved it to my Bug Out Bag, and before you think that’s a death sentence, allow me to explain. I keep one kit in my B.O.B. which doubles as my kit for hiking in the woods. It’s what I need for survival, and the one pouch I’d grab if I could only grab one. I’ve found the Context Organizer to excel for this, as the GR1 Field Pocket I had been using always felt too stuffed. This can be heavy, so the disadvantages of the size isn’t a factor. Overall, in this usage I like the Context Organizer, but for an EDC piece of kit, it’s way too large.