A new favorite light comes from an unexpected brand.

I ran into a small issue a few months ago. While going through TSA in Seattle my bag was flagged for additional screening. It was the first time in quite a while that I had this happen, so I was really curious as to what it was that set it off. Luckily, the TSA person was super nice, and she explained there was a dense metal cylinder that they wanted to inspect. I knew what it was, it was my Reylight Brass AA light.

That’s a beefy light, and she took a look at it, flicked it on and rightfully commented: “that’s a nice flashlight”. Goddamn right it is. But she also told me it was likely to get flagged more and more often now as it looks like it could be a gun part. Well, fuck. I had traveled with it before without issues, but TSA is constantly changing, so I was not surprised to hear this, and knew I should probably pull it from my travel kit.

But then, what do I replace it with? I thought about the Massdrop AAA light that I love, but I already keep that in a particular spot, and I would want to buy another one. And if I am going to buy something, why buy another of what I have? Additionally, while a great light, it’s not really a good light for serious usage as it is rather small to hold in your hand for long periods of time. I quickly settled into wanting a light powered by a single CR123 battery. These are typically robust and powerful lights, but still pretty compact.

I ended up deciding on the SureFire E1B-MV Backup. Let’s dive into this light… 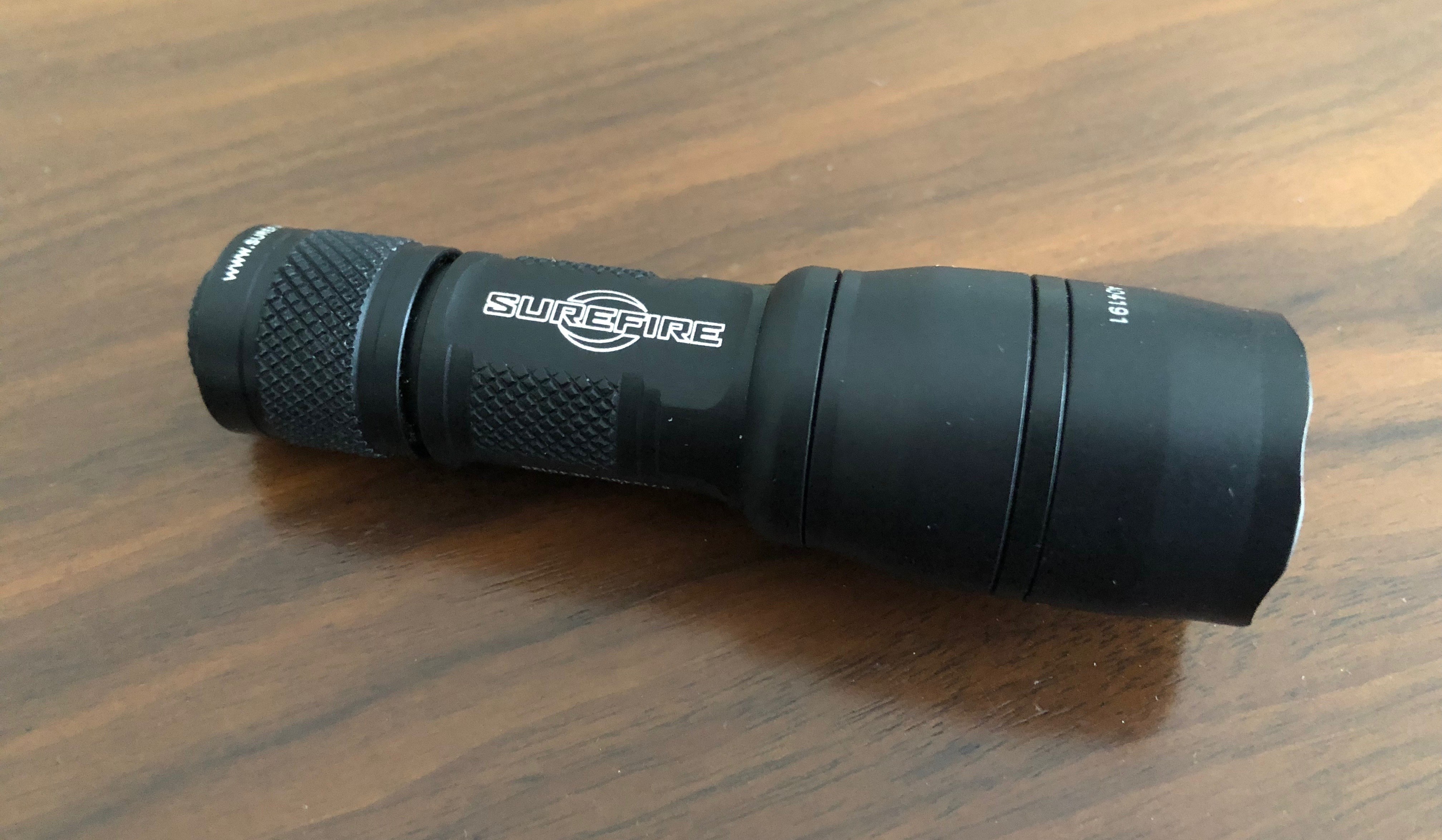 First things first, I want to address the brand. SureFire is a brand that ‘light’ enthusiasts seem to either hate, or tolerate. The best I can tell the marks against SureFire are:

Whereas the pros are:

So here we have a rather classic situation of being able to get a “better” light for “less” money from other brands, but the reputation of the quality of lights that SureFire has sold over the decades is almost unmatched. That doesn’t mean other lights aren’t as durable, it means that SureFire lights are typically more dependable then even other very durable lights.

I actually looked into this quite a lot, as I already owned a couple of SureFire lights, and here’s what I can tell you. I found my oldest incandescent SureFire light in a box in my garage. It’s probably been 4 years, I pulled it out, and it actually turned on. I can promise you that no other light I own can do that. Armytek makes fantastic lights on the bleeding edge of technology, but if I let one sit for as long as a SureFire, the SureFire would work more often than the Armytek and for longer. That’s my personal experience and yours may vary.

SureFires are expensive, but I think the cost can be justified if your needs call for it.

A small but powerful flashlight which is not as heavy as the brass light it is replacing. I also wanted something which could take a lot of abuse, and be used as my only light for most of the situations I use or need a flashlight for. 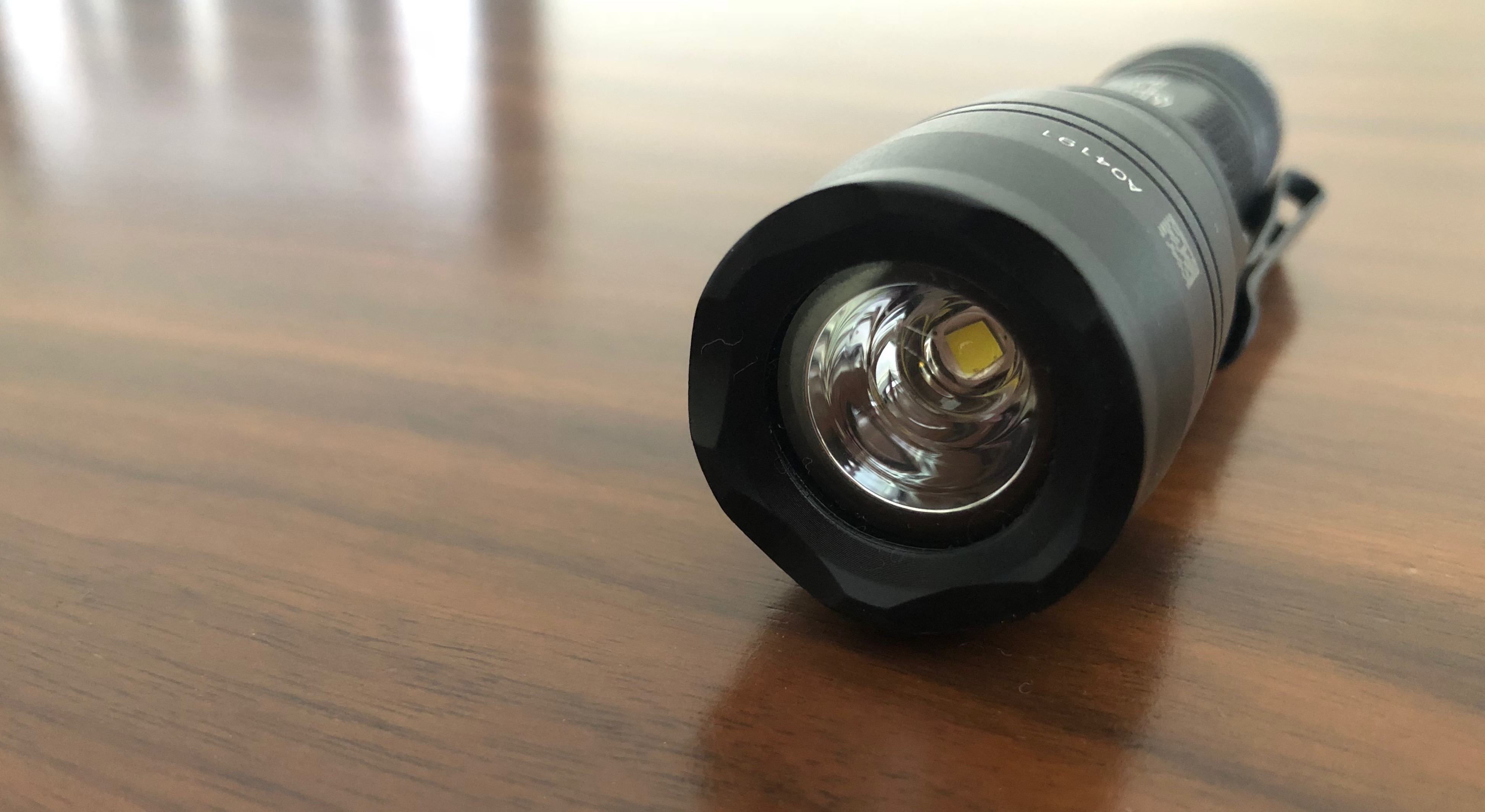 In the end, the E1B-MV was the closest to what I wanted. The ArmyTek was very tempting, but I wasn’t drawn to it.

I’ve really put this light through the paces since getting it. I’ve used it as my nightstand light, I’ve used it as the primary light for camping, as well as taking it basically everywhere with me. It’s very lightweight and incredibly durable. More interestingly is just how bright it seems. 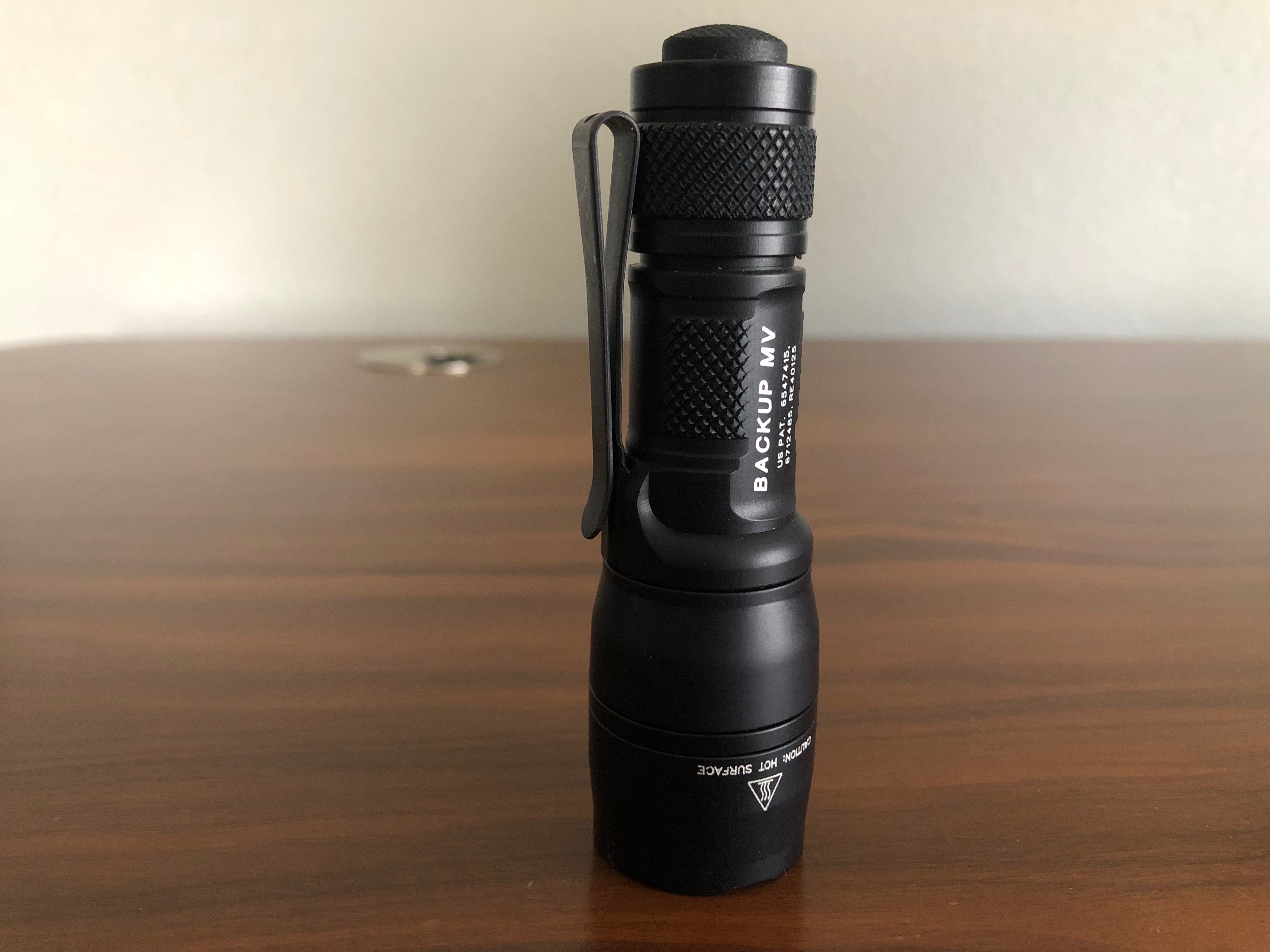 For a 400lumen light, it feels much brighter than that. I think this can be attributed to the MaxVision system (that’s what the MV stands for) where SureFire was making sure the beam of the light is wide and very evenly dispersed. I certainly find that to be the case when using the light. If you light up a room in the dark with this light on high, then most of the people in the room are going to be fucking annoyed. 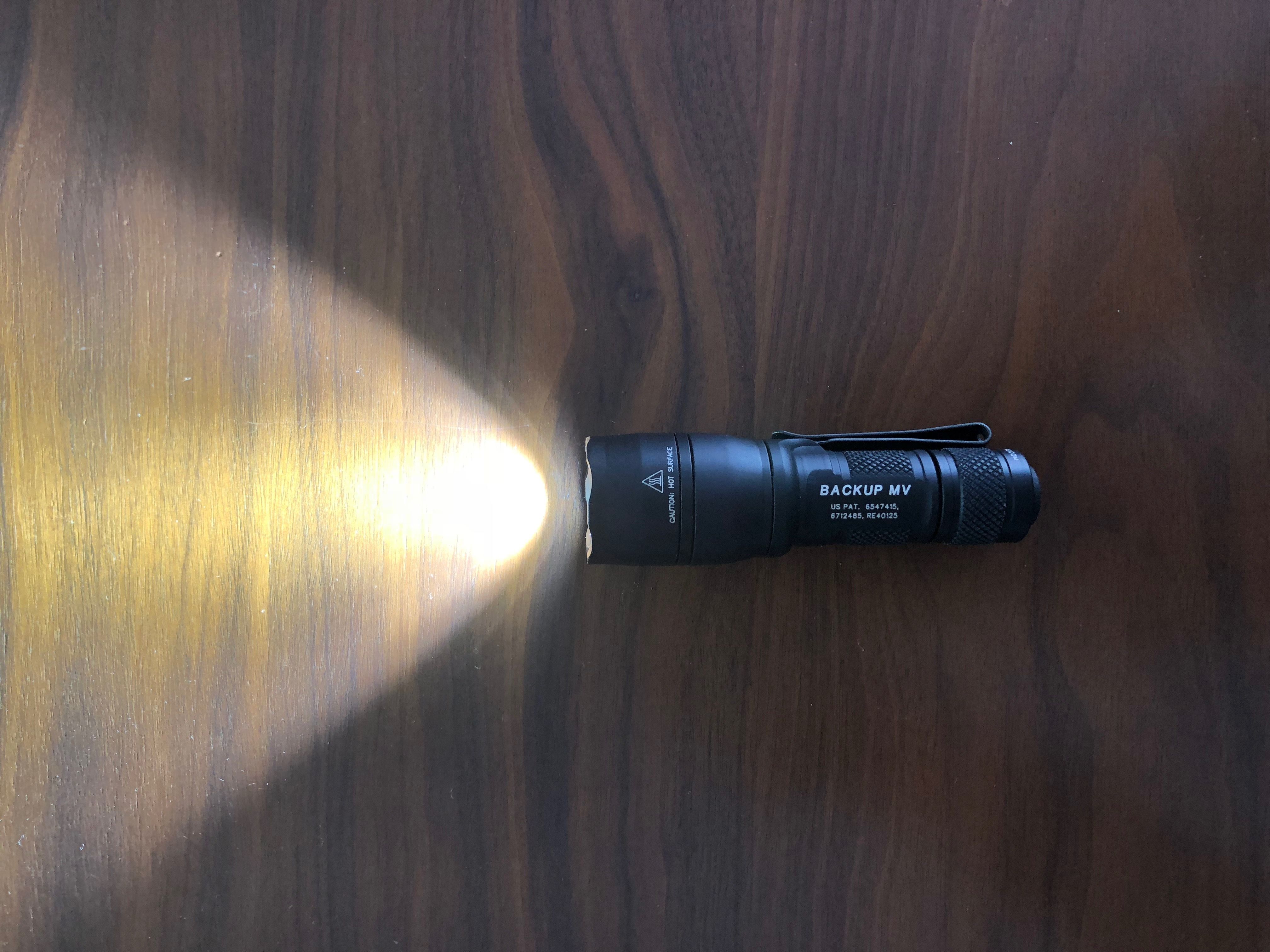 That said, it doesn’t reach too far, just about far enough, as it is more of a flood light than a search beam.

I wish the lower output was actually lower, but it’s just low enough to still be useable. Even the high output could be a bit lower, but that’s for my use which is decidedly non-tactical. I think for what this light was designed for, it’s the right output. For camping this light was superb. I coupled it with a red filter over the top to reduce the output later in the evenings, and though that was a bit clunky, it worked really well.

All in all, I really think this could be an ideal all around light. Too large to carry on your person as an EDC, but otherwise really well sized between being small enough and light enough, and still large enough to be comfortable in hand for longer periods of time.

Compared to Other Lights I have

Of course I have tons of other lights, so if I compare this light to all the others, I get something really interesting. I love the feel, design, and output of the Reylight Pineapple AA the best — it’s really quite perfect. But that light is heavy and problematic to travel with, and too low of an output to take camping for me. I love my older SureFire 6PX Pro and ArmyTek Wizard quite a lot, but they are both much too large and thus problematic to take anywhere but for dedicated uses.

That’s where this E1B-MV fits in. Large enough, bright enough, and durable enough to take out in the woods with you as your only light. And yet small and light enough to pack around a lot of places. The low output could be a bit lower for checking on the kids at night, but I have other flashlights which will always work better for that.

Compared to all my other lights, this is second only to that Reylight Pineapple for my preference of use. However, if I had to choose between the two, I would choose this light — the SureFire is better all around than the Reylight.

Highly recommended, but so is the old 6PX Pro dual output. Here’s the thing with lights, for the most part you don’t actually need that much light. And that’s where I struggle with this, because I pulled out a bunch of older lights I had stashed away, and that older 6PX Pro with dual output at 320 lumens max, may actually be a more perfect light. It’s bright enough you could easily make do in the woods, around the house, or for anything else. And yet, it’s not too bright. 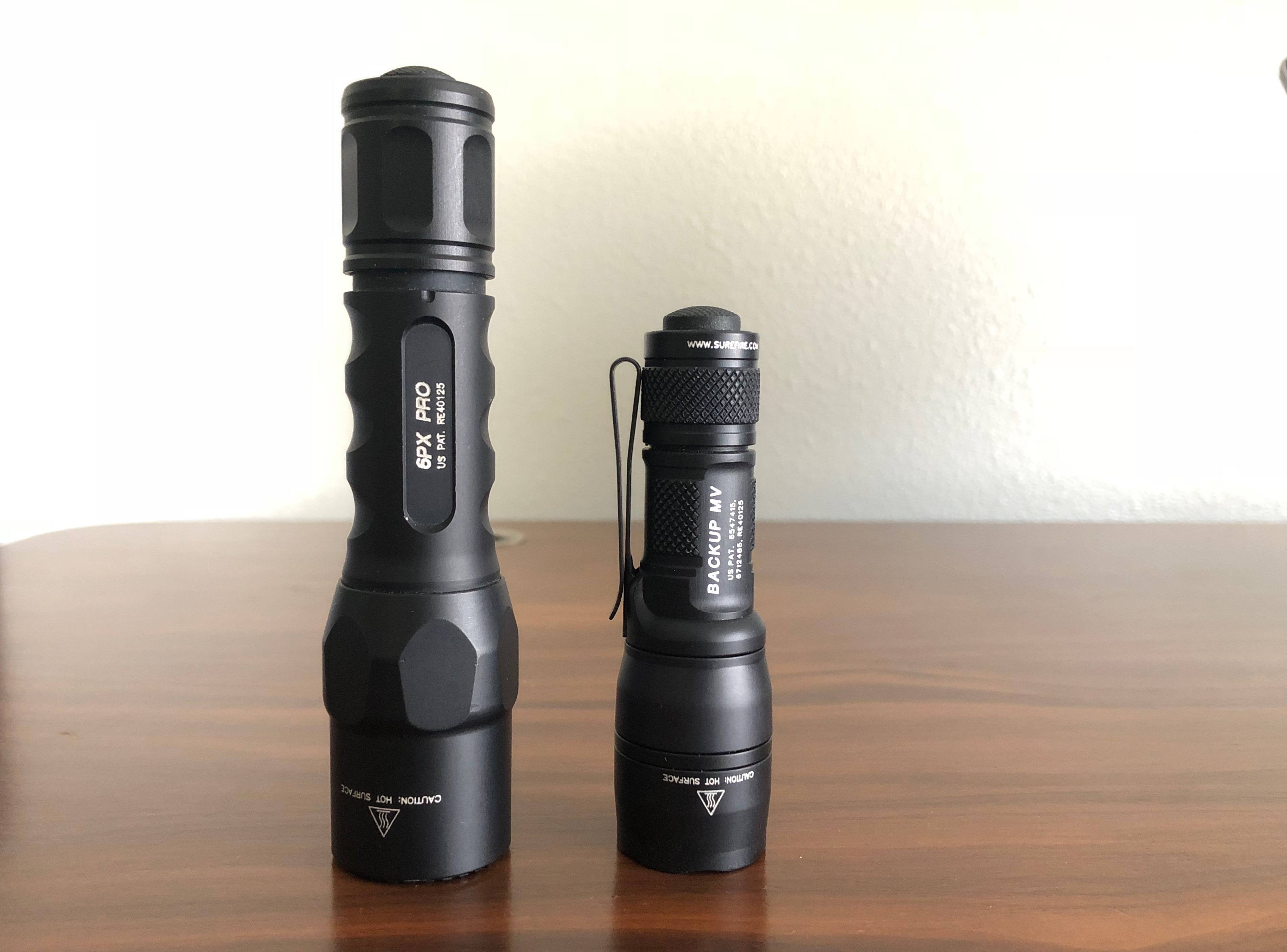 Moreover the older 6PX Pro fixes the fatal flaw of all new SureFire lights: it starts on low. New SureFires now start on high, so when when you click the E1B on, it’s at 400 lumens instantly, then you click again to drop it down. The older SureFires worked in reverse: starting low and going high. Yes, other brands like Olight have much more sophisticated ways of handling this, but those are more complicated lights and not ideal. 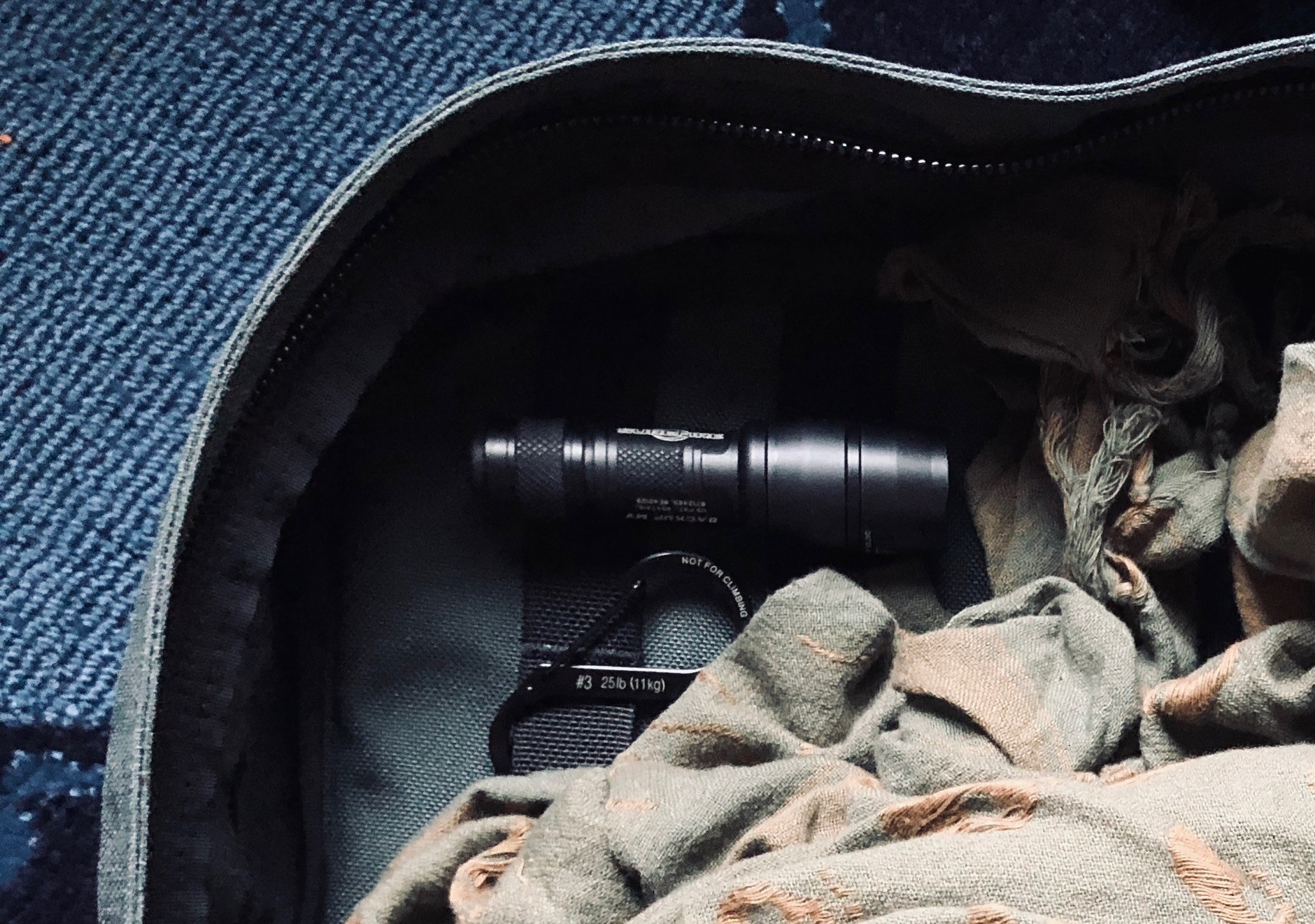 With the E1B, it would be perfect if it started on low and moved to high. I think for most people getting the 6PX Pro, if you only want one really good light, the 6PX is a better option. It’s half the price, and bigger. It works how you want it.

But if you want something smaller, the E1B-MV is quite good and has become my most used light.

Side Note on Camping

I know most people swear by headlamps when they camp. And I really like the Wizard Pro, but I find headlamps to feel, look, and work dorky. I really don’t like them. For all but the most specific tasks I prefer to hold a flashlight.

That said, when I took the E1B camping, I did need to switch to a headlamp to deal with something, but only for one of the nights and only for 15 minutes. I could have made do without the headlamp. I think I’ll find a better/different headlamp for that type of usage. So if you want to buy and Armytek Wizard, let me know.