Something which I was incredibly excited about with iOS 12 was the launch of the Screen Time utility as a native part of iOS. Being able to see how much time I was using the device, impose limits, and break this all down without having to jump through all the hoops other apps made me jump through to see this — well it seemed like Screen Time would be great. Add to that interesting metrics like ‘pick ups’ and notification counts — I hoped that this would encourage many developers and product owners to change the way they juice ‘engagement’ metrics.

Alas, this tool has changed nothing for me. And is fundamentally flawed — falling into the same trap so many Silicon Valley ‘solutions’ fall into: lots of noise with little impact.

Now, there are good parts of Screen Time. But most of it bears the same burdens as all analytics software: you can see what happened, but it is up to you (the user) to take action on these items if you want to change things. There is no answer, just data. For instance, on the notifications section, you can tap on any app there and modify the notifications — this is good. 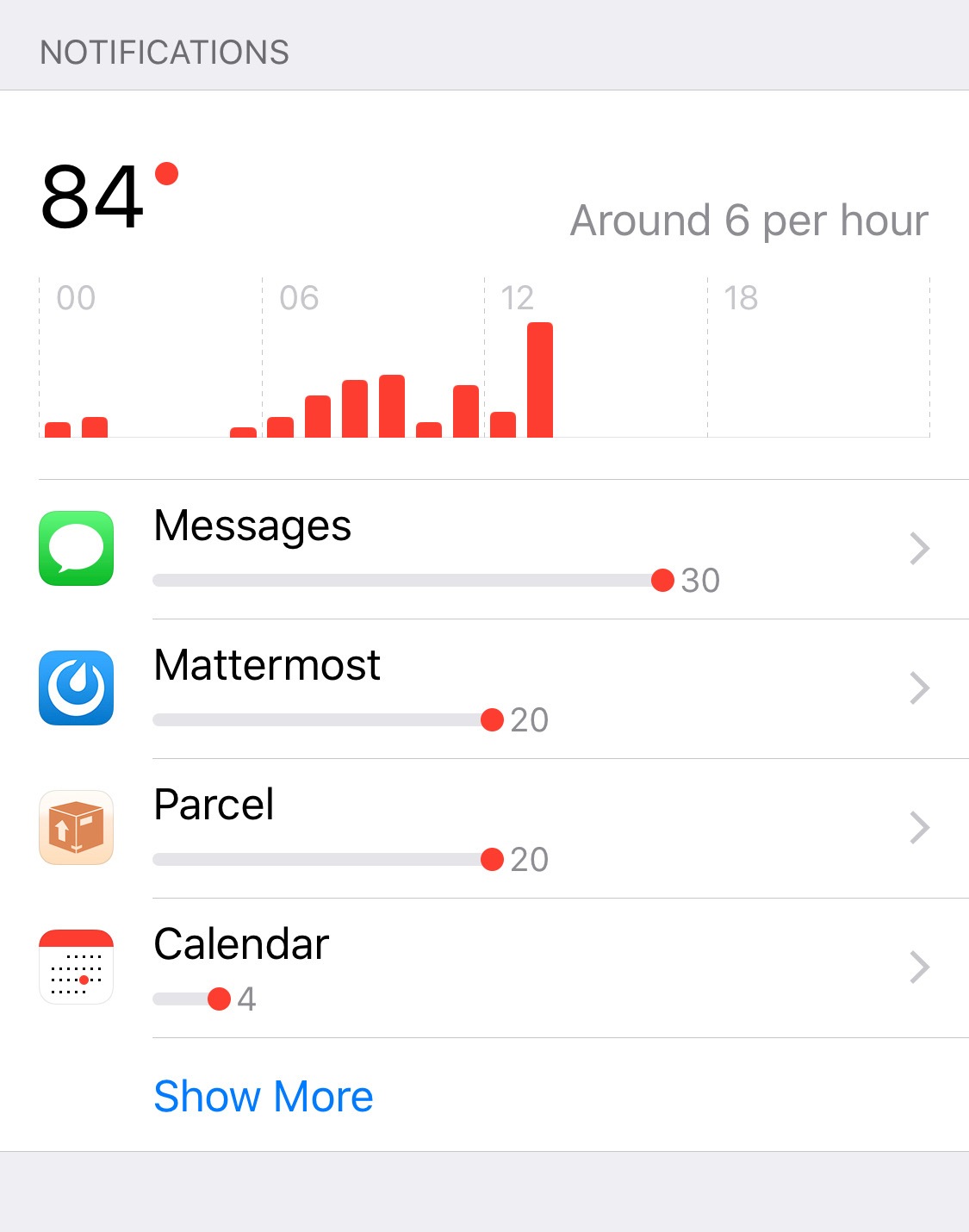 However, if you are getting a ton of notifications, then simply turning them off solves no problems at all. Because presumably you are only getting notifications you want at this point (having turned off the ones you don’t want). A couple of things which would be good additions to this section:

More granular settings would allow you to truly take back control of the device. It would allow you to reasonably effect change, without going full smartphone hater — which is really the issue at hand for makers like Apple. They cannot afford a revolt against smartphones, and users are struggling to manage utility and distraction with this tool.

App Limits are great, because they really allow you curb your usage (or monitor your kids). DND is also great, as are the other restrictions. Downtime however is nearly useless.

The idea behind downtime seems smart, right? You choose some apps always allowed like FaceTime, Phone, Messages, Maps — and during ‘Downtime’ you cannot use any of other apps. Well, you can, but you’ll feel bad when you tap to ignore downtime, and the Apple comically uses the world’s slowest animation sequence to further shame your decision making.

What we really need is more granular controls and a ‘work time’ where during work hours you restrict access to only a subset of apps, and only get a subset of notifications from those apps. Granular, it’s my word of the article.

That got confusing really fast. So let’s break this down more like a schedule for just Messages and say Instagram.

The crux of the issue is that life is messy and full of exceptions — so hard a fast on or off tools like Downtime really don’t work outside the design studio.

Back to Screen Time

What is missing with Screen Time is Apple giving you analysis. What if Screen time simply asked: what’s your goal? And gave you some options like: use my phone less, be present when at home, not get distracted at work, etc. Then from there, the OS helps you setup very granular rules to be able to reach those goals.

Imagine Screen Time being less about analytics and data, and more about a guided wizard to walk you through regaining control of your life with a series of questions. That would be a solution people could get behind.

It’s a far better, and more useful, way to approach all this. Because the reality is: notifications are the issue above all else — but we simply need some notifications.

For example: do you whitelist all your travel apps right now? I sure as shit don’t — I didn’t even think about doing that until I was writing this. But what if your plane is late, and you don’t get the notification because it didn’t make sense to whitelist that app when you set up the tool, and now it’s currently downtime or whatever and you head to the airport way too early. That’s fucking annoying. You’ll be cursing at your device asking why it can’t be smarter — and yet it can be, which only pisses you off more.

With proper integration across the platform, that annoyance should never be an annoyance. Likewise I shouldn’t have to decide who may or may not be important enough to get through — but yes the OS should decide that. If Postmates isn’t on my whitelist, but I use the app to order something during downtime, I should get notifications from that app until the order is delivered — then the app should be put back in the holding cell. Let’s forget about using machine learning and AI to do useless shit, and use that tool to make small decisions for me so that my smart phone actually feels fucking smart.

Apple should do that.