Could this be an HR approved EDC knife?

Note: WESN sent me this sample for review.

The WESN TI Micro Blade is one of those knives where it should have a cult following because of exactly what is shirks. It’s small where everything is large, it’s inexpensive in a category overflowing with overpriced crap. It uses better than average materials, and oh, it is minuscule in size and yet can replace most EDC blades. In other words, from the specs alone, this should be the ideal blade for office workers everywhere.

It is big enough to get shit done, and small enough not to threaten any HR department. But, the first version I got had a major deal breaker.

Everything else aside, the deal breaker with the knife is the opening action. It has both a thumb stud, and a flipper tab. It’s nearly impossible for me to be able to open the knife with the thumb stud. 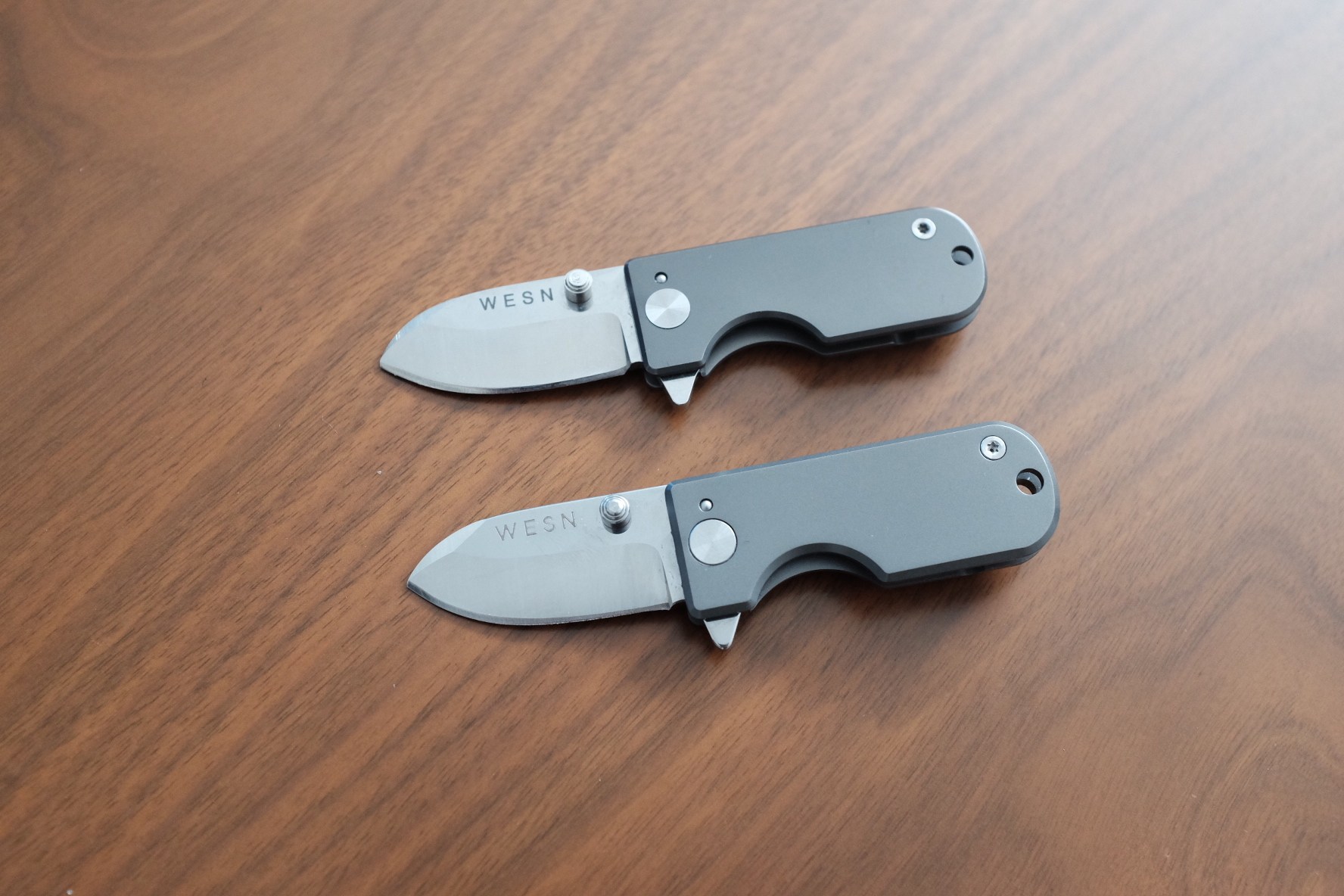 The issue was, while it was everything it claimed to be, it was very hard to open the blade in order to use it. And so it was always stunted by this. Then, a few months back I got an email from WESN and they asked if I would be up for taking a look at the new revision, which I am calling Rev. 2 for clarity, and they further stated that they felt they solved every issue I had with the knife. A tall order, so I promptly wanted to check it out. 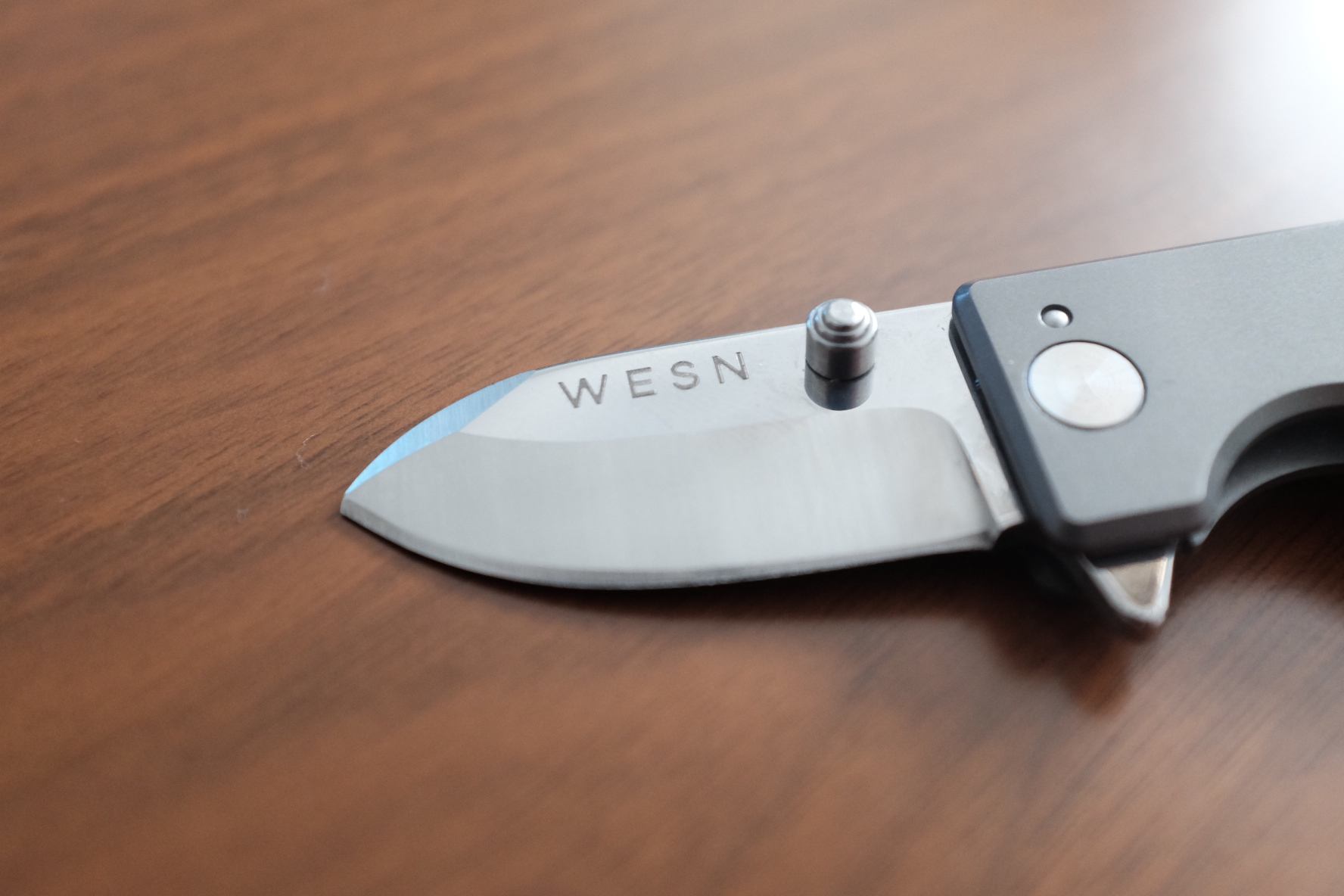 And it lives up to the hype and now fulfills the promise its design originally set out to fill.

The knife feels very high end, which is surprising given both its small stature and low price point of $50. Where costs are cut on this is the blade steel. AUS8 is, at best, an average steel. However, it doesn’t matter at all on this knife. With a short blade you won’t be using it for survival, this is a knife to survive an onslaught of Prime deliveries, and for that AUS8 is actually a great choice. Great because given the short blade length and softer steel, this knife sharpens back to hair shaving in under a minute on ceramic stone. 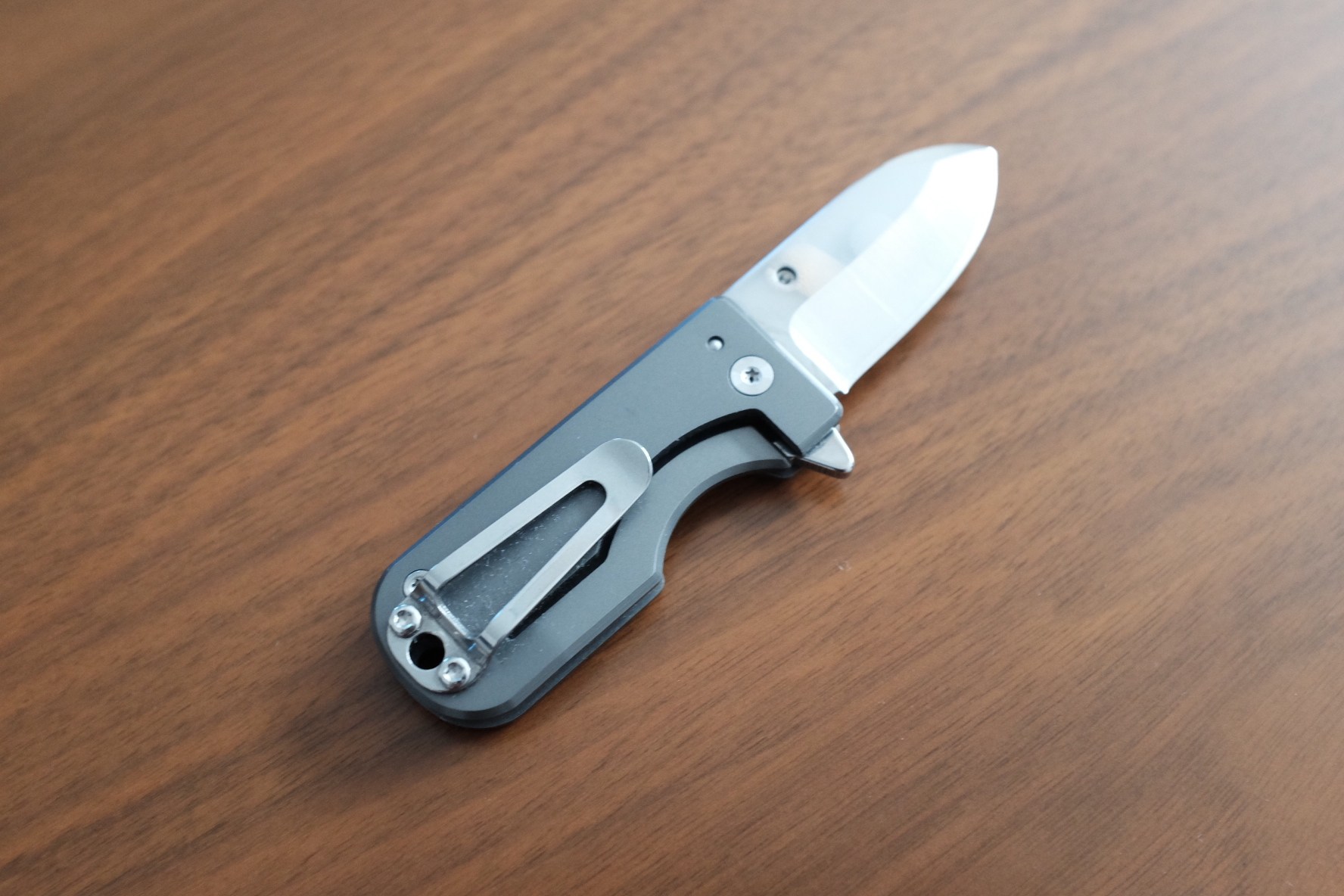 So while the blade steel may turn some off, I think it is an excellent choice for this form factor. Along the lines of why Victorinox uses softer steel.

My complaint last time was that I couldn’t easily open the knife, and they have completely fixed that. I still find the thumb stud very hard to operate given the low profile it has and the smallness of the handle, but the flip action is perfect. It is firm enough as to not worry you that it will fly out of your hand, but light enough that I can get full deployment on the knife almost every time.

I would never use the thumb stud on this simply because I am left handed, and thus would have to use my non-dominant hand, so for me the upgrades to the action are all that is needed. The knife opens fast and reliably hits the lock to stay open. I can’t imagine this was easy to dial in on this small of a knife, so kudos for the fix here. It makes a world of difference.

Given the size and weight, this knife actually disappears in your pocket. I thought I lost it for a full day, and later found it inside my wallet because it had accidentally got in there and I didn’t notice. I know that sounds weird, but it is a huge bonus with this knife. 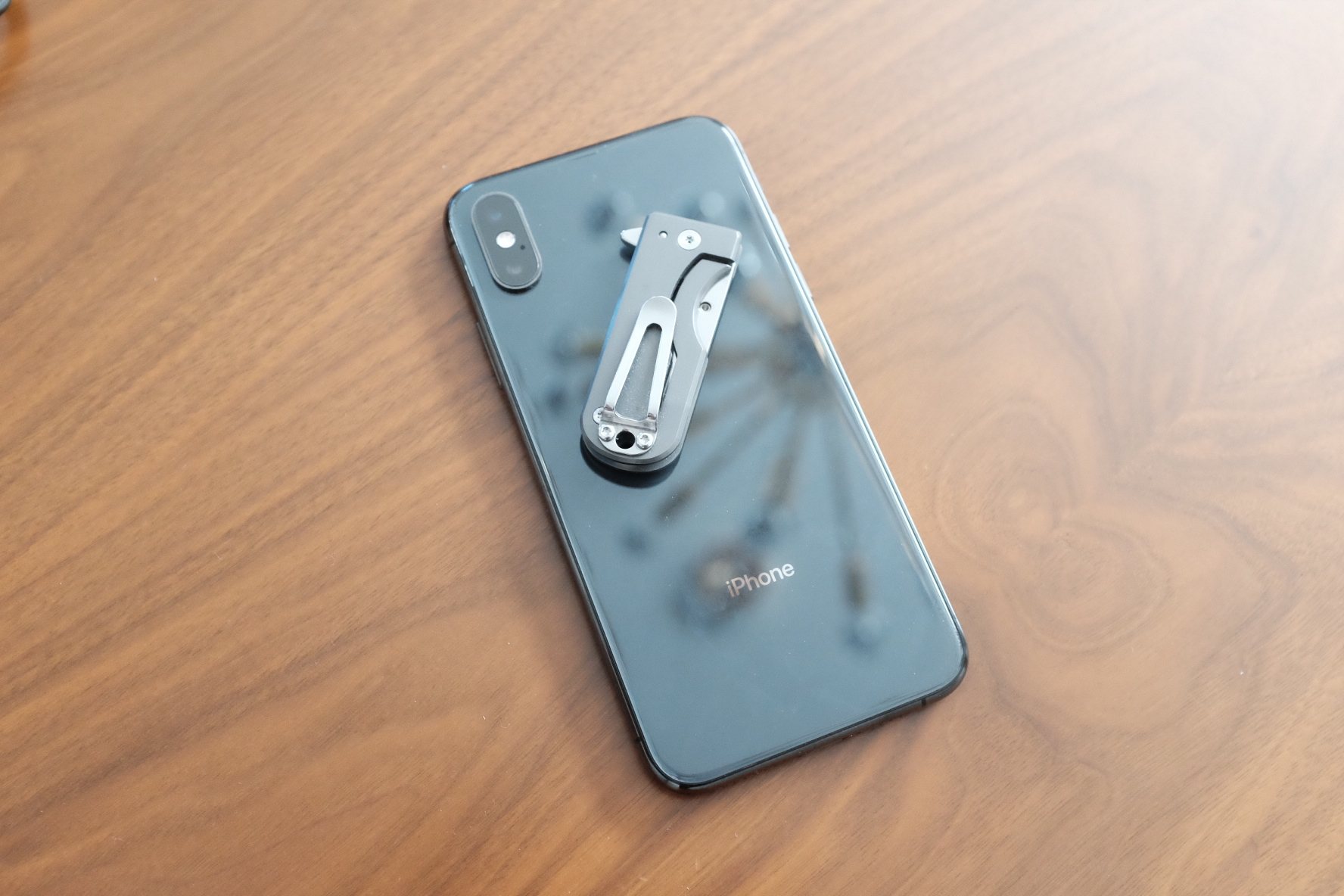 So it excels in carry, and as I mentioned at the top I doubt anyone would be threatened by this knife. So, how does it perform? Well, but it is also not the best. The blade is thick and squat, making it not the best slicer out there. It destroys boxes just fine, which is likely where it will find most of its use, but you are not likely to be slicing up an apple with it. Perhaps you could cut up some baby carrots.

Again, that’s not what this knife is made for. It’s made for someone who wants to be able to cut small things when needed, or to open packages. I give it top marks as a package opener, and as long as it is not gummed up by package goo, it will trim threads off any shirt nicely.

What does happen though, is that the entire blade tends to get gummed up with package tape goop at once. Whereas on a larger blade perhaps just the belly would get gummed up, on this blade the entire thing is basically the belly so it happens all at once. That’s not a deal breaker, as much as a trade off for a blade which quite literally disappears in your pocket. 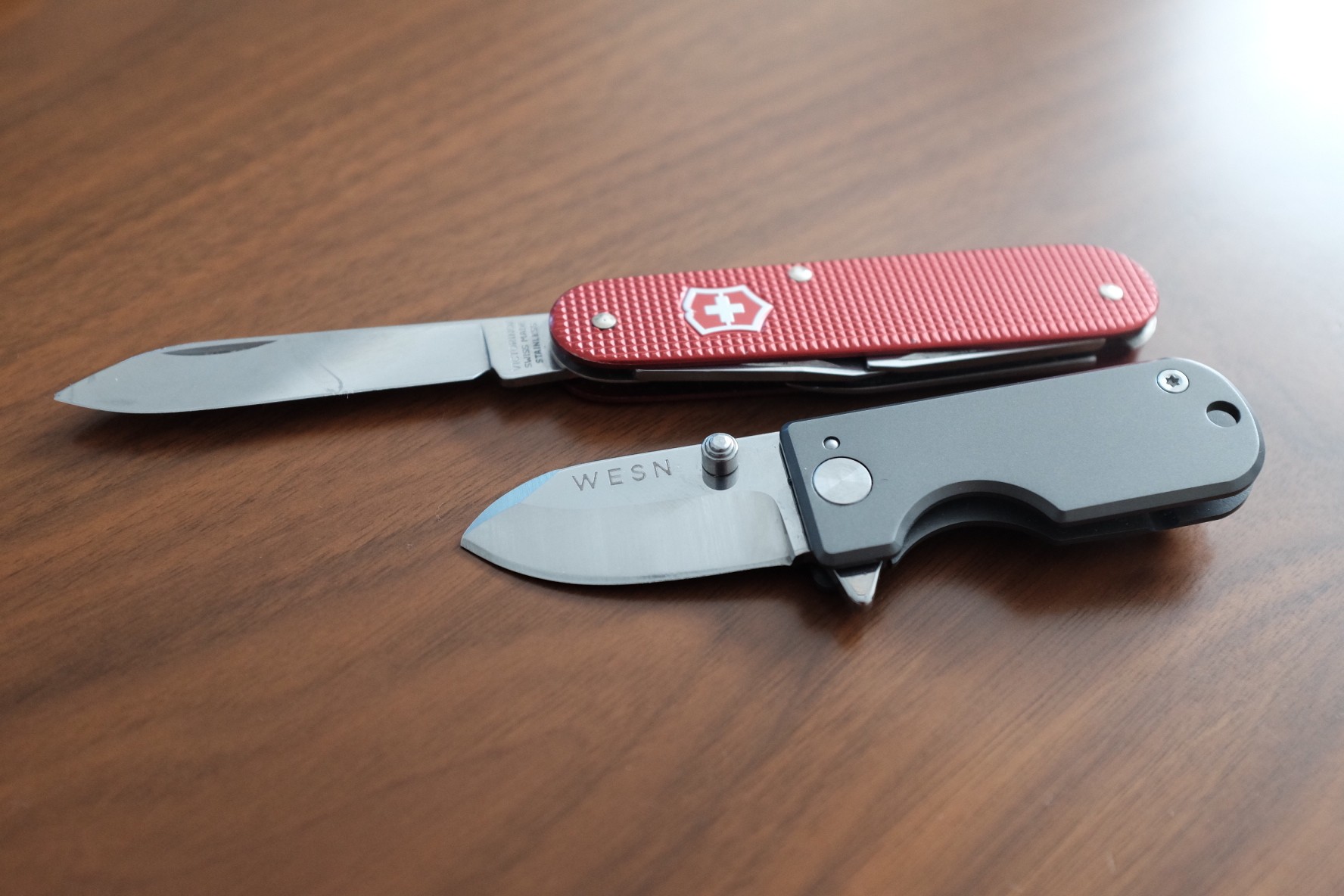 I can now fully recommend this blade. It is really great and if you are a knife person at all, this is one to add to the collection. If you are not a knife person, but would like to have something just in case, this is better than your average ‘Swiss army’ knife. Now, do you think I can convince them to try out this design with a sheepsfoot design?

Until then, go buy one, or two.