This is the keyboard I recommend for basically anyone.

It is funny to me that I feel like I have been talking about this keyboard from Drop.com for a while now, but I never officially wrote a review of it. The entire time I have been thinking I had reviewed this already, and yet I hadn’t. Allow me to rectify that oversight now.

The Drop.com ALT Keyboard is one of two primary keyboards produced by Drop.com: the CTRL and ALT. There are a few variants, mine is the standard ALT. This keyboard is a modern mechanical keyboard, and something which is highly extensible for the most nerdy of keyboard wizards, or as simple as plug and play for the rest of us.

It is, I think, probably the smartest/safest/easiest purchase you can get in the convoluted world of mechanical keyboards. It is one of my favorite keyboards.

This is a 65% keyboard, and the key features of the layout is that there are dedicated arrow keys, and DEL/END/PAGEUP/PAGEDOWN keys along the left side. I prefer 60% layouts, but it can be quite annoying to have to remember where your arrows keys are and how to trigger them — thus a 65% layout offers those dedicated keys and is generally a lot easier for most people to adapt to.

I’ve got no complaints about this layout, it is highly functional and overall great.

At $180 this is buy no means a cheap keyboard. The keycaps it comes with are pretty meh for that price — not bad for most people, but if you like custom keycaps you will be let down. I changed mine as fast as I could. But, you are getting a really nice board that is assembled for you, the key highlights are:

In other words for what you get, this is a beautiful and well put together keyboard. I think it is priced correctly. 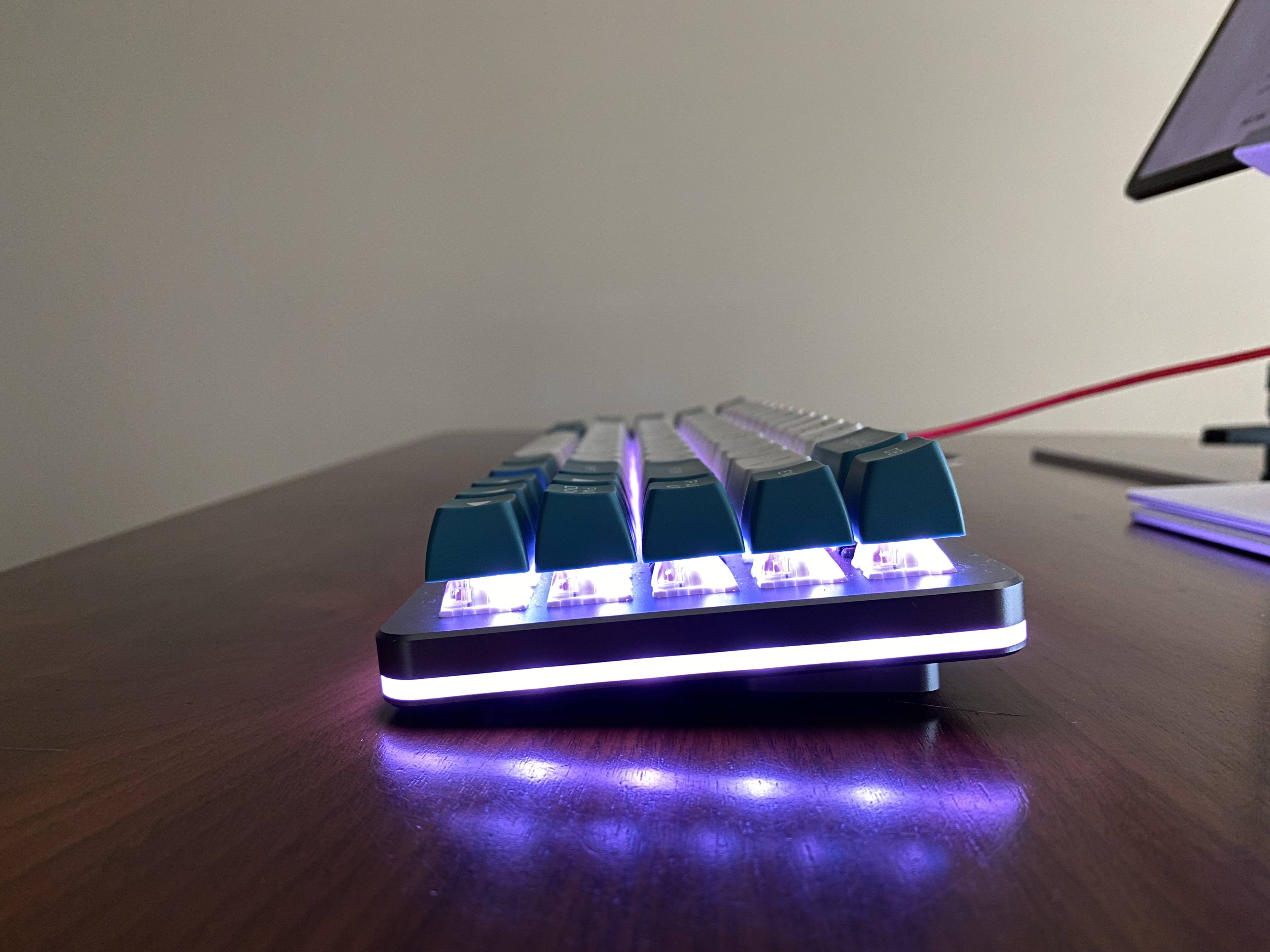 What you don’t get, is Bluetooth, and instead you get dual USB-C ports. This is super nice for iPad Pro and MacBook Pro users as you can use the same cable you would use for anything else, and plug it directly in. But, that’s about it. USB-C seems like overkill on this more than anything else, but it is neither awesome, nor bad. It just is. 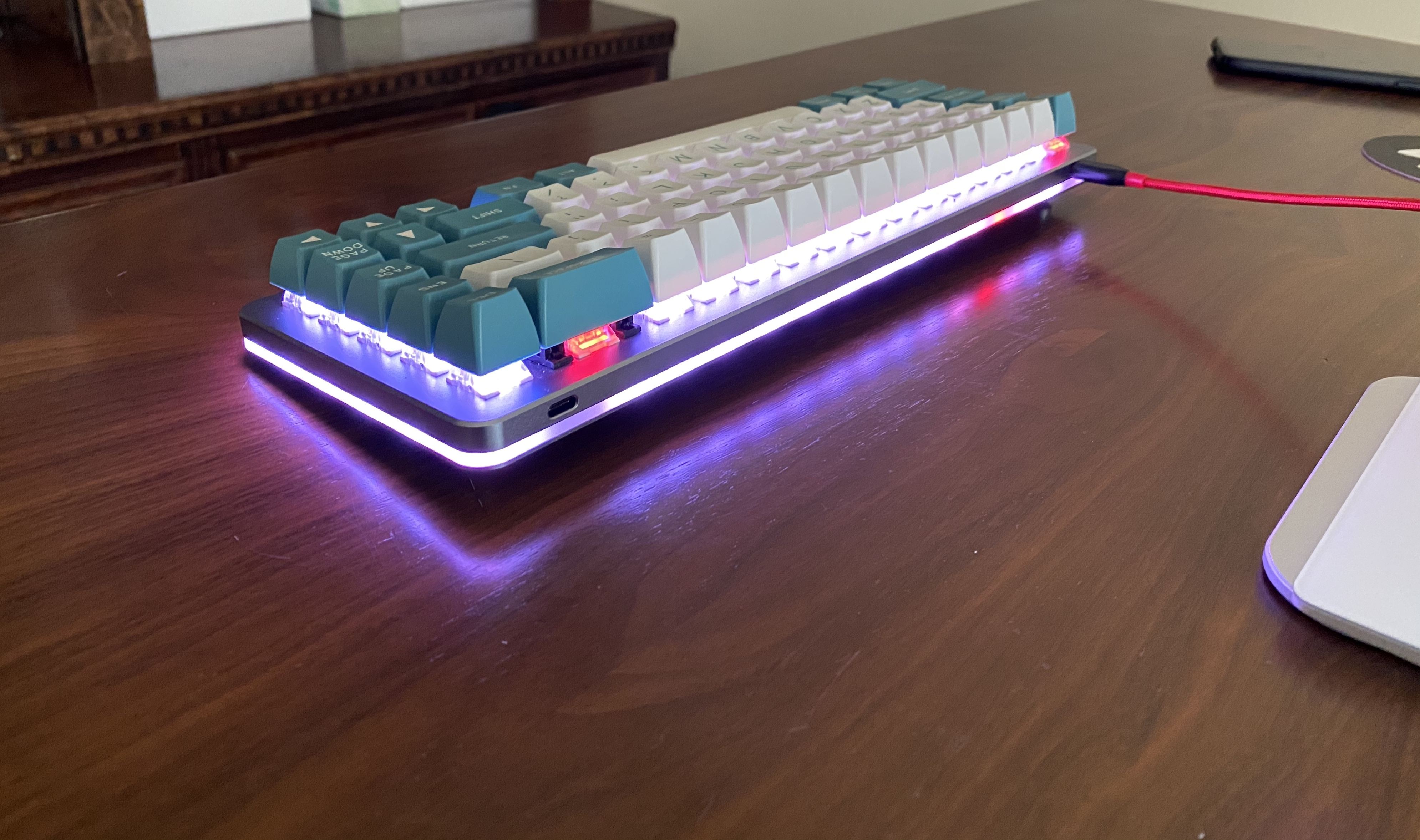 And the dual port nature: that’s just so you can choose which side the cable comes out of.

The big deal on this keyboard is the firmware which is QMK. For those not into keyboards, this is a very popular open source firmware — which makes the keyboard fully programmable. You can pop open terminal and do all sorts of stuff. 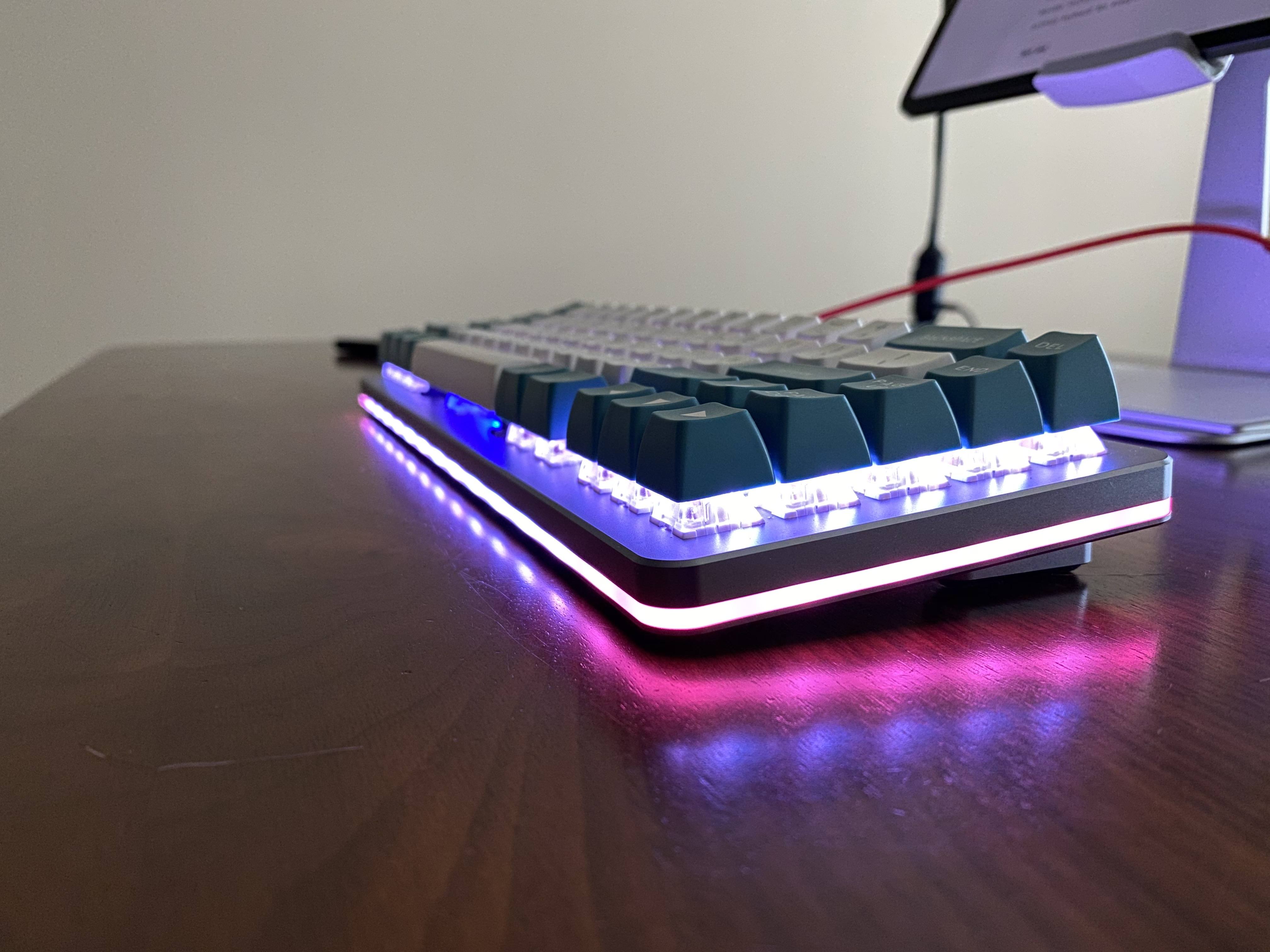 But you won’t want to, because if you wanted to do that, you would be soldering your own keyboards instead. No, you see, Drop.com has made it’s own web configurator for this keyboard. You just point and click and change the layout however you want. You’ll still need the terminal (not iPad friendly) to install the new firmware, but it works mostly as written in the directions. I’ve done it several times.

What this means is you can tell it that Page UP and Page DOWN are stupid, and instead shall now be volume up and down. That END means mute. That no one likes caps lock, so KILL THAT KEY. 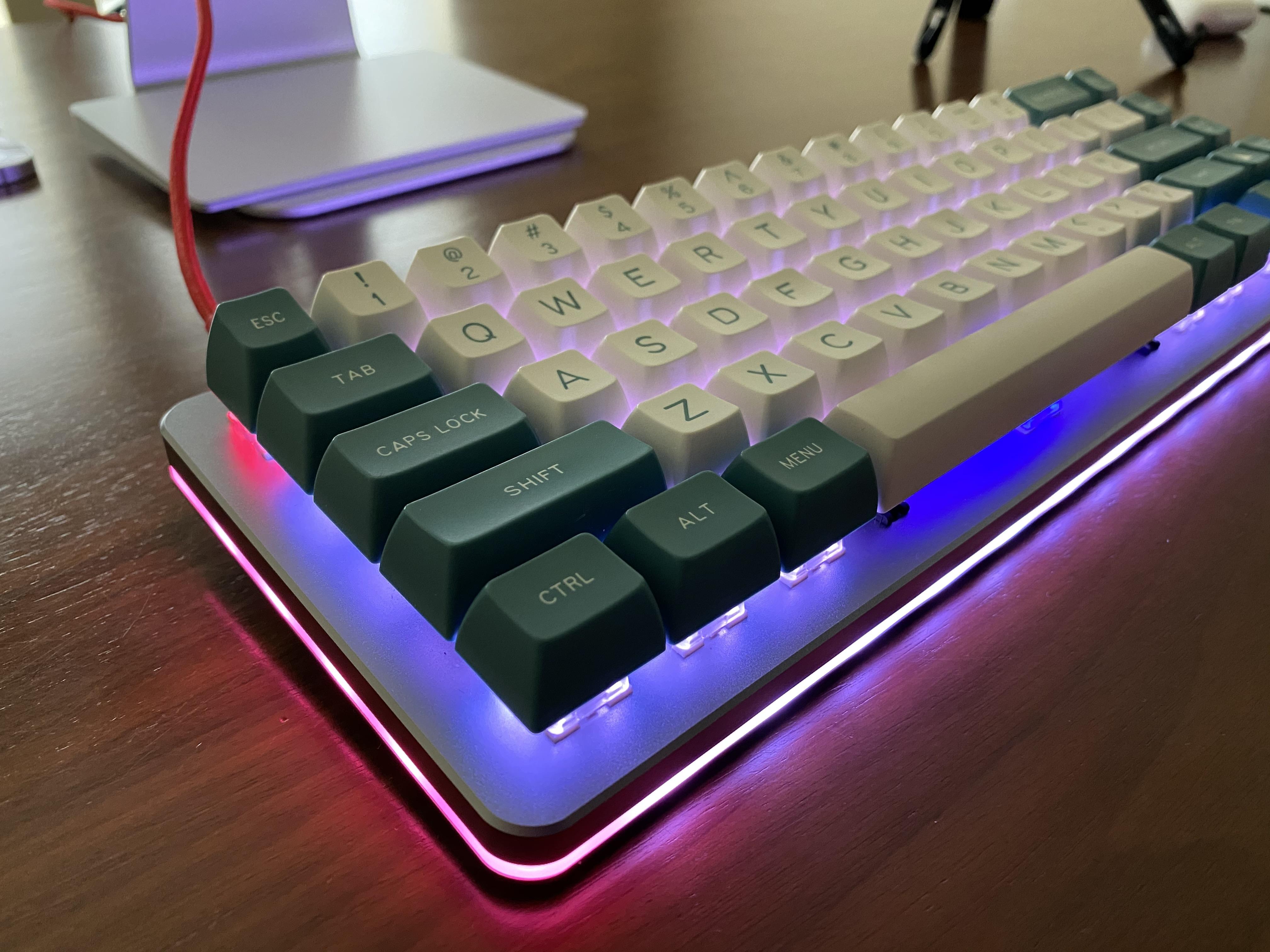 But even more fun? You can tell it exactly how you want the lights on the keyboard to look. I have ESC and Backspace glow red, the spacebar glow blue and everything else white. Oh, and to do the sliding red bar with white background for the LED strip thing on the base. I mean, why not?

There’s no limitations with this keyboard, as you advance it will keep up with you. 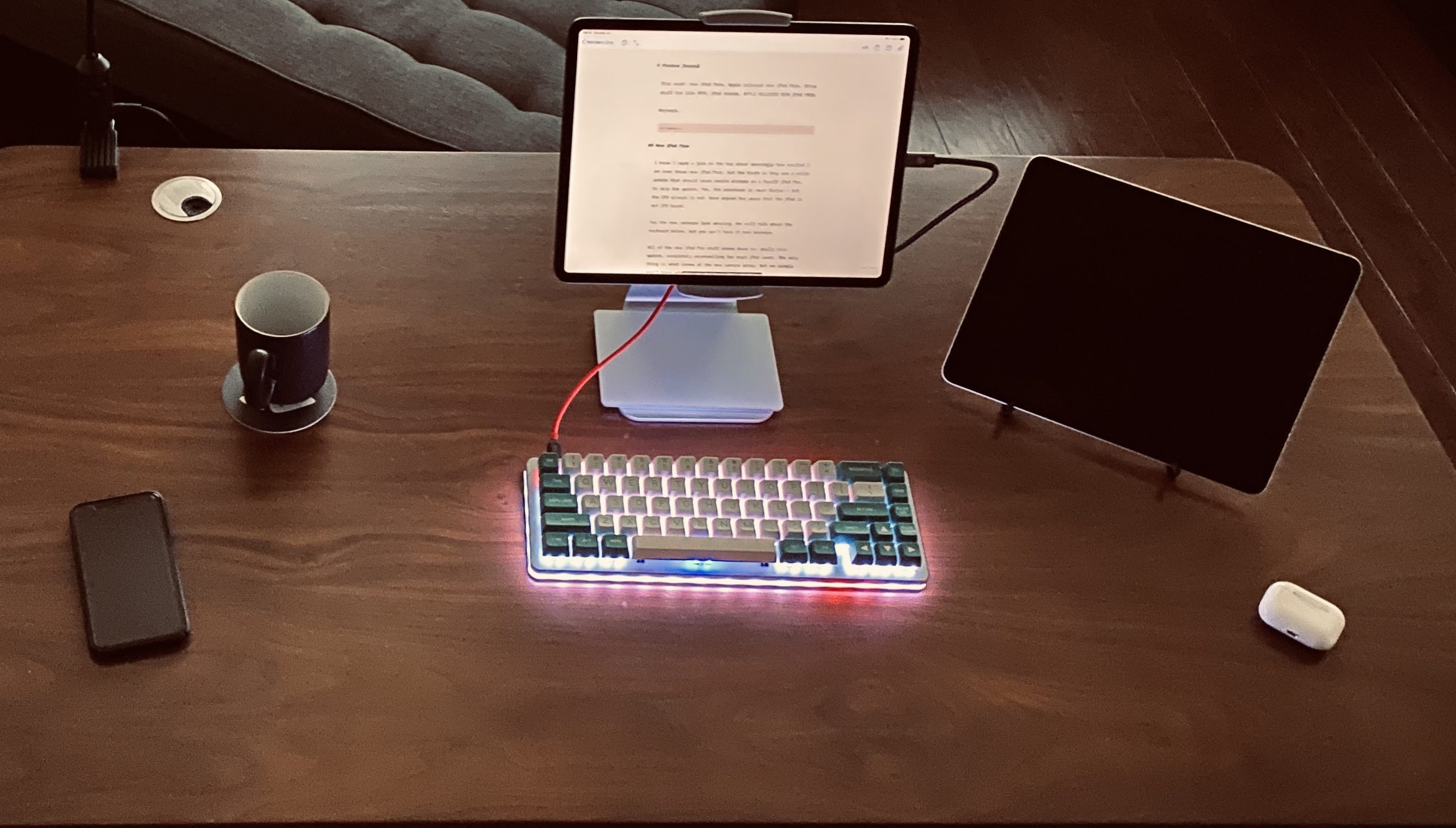 This is the perfect balance of huge customization, and ease of use for people who don’t want to know a ton. If you are wanting to get into mechanical keyboards, or you just want something that looks awesome to put on your desk. Get one of these, right now they are even selling them with custom keycaps included. You can’t beat it, this has become my primary keyboard for everything.