Two options for a good looking GR1, without a tactical vibe.

For a very long time, GORUCK has sold a ‘slick’ version of the GR1 in random spurts — the GR1 of course is the world’s best backpack. The Slick version of it was/is the exact same as a standard GR1 with four main differences:

Everything else about the backpack is the same. Originally this variant was called “SK” instead of Slick (you had SK26 for a GR1 26L, and SK40 for the GR2 40L), but the bag is the same as the GR1 and those which are labeled GR1 Slick (most commonly found on Huckberry) now days. I reviewed the SK26 here and a friend also reviewed it here — I always found that black SK26 lacking. I didn’t like the bland nature that these changes lead to. 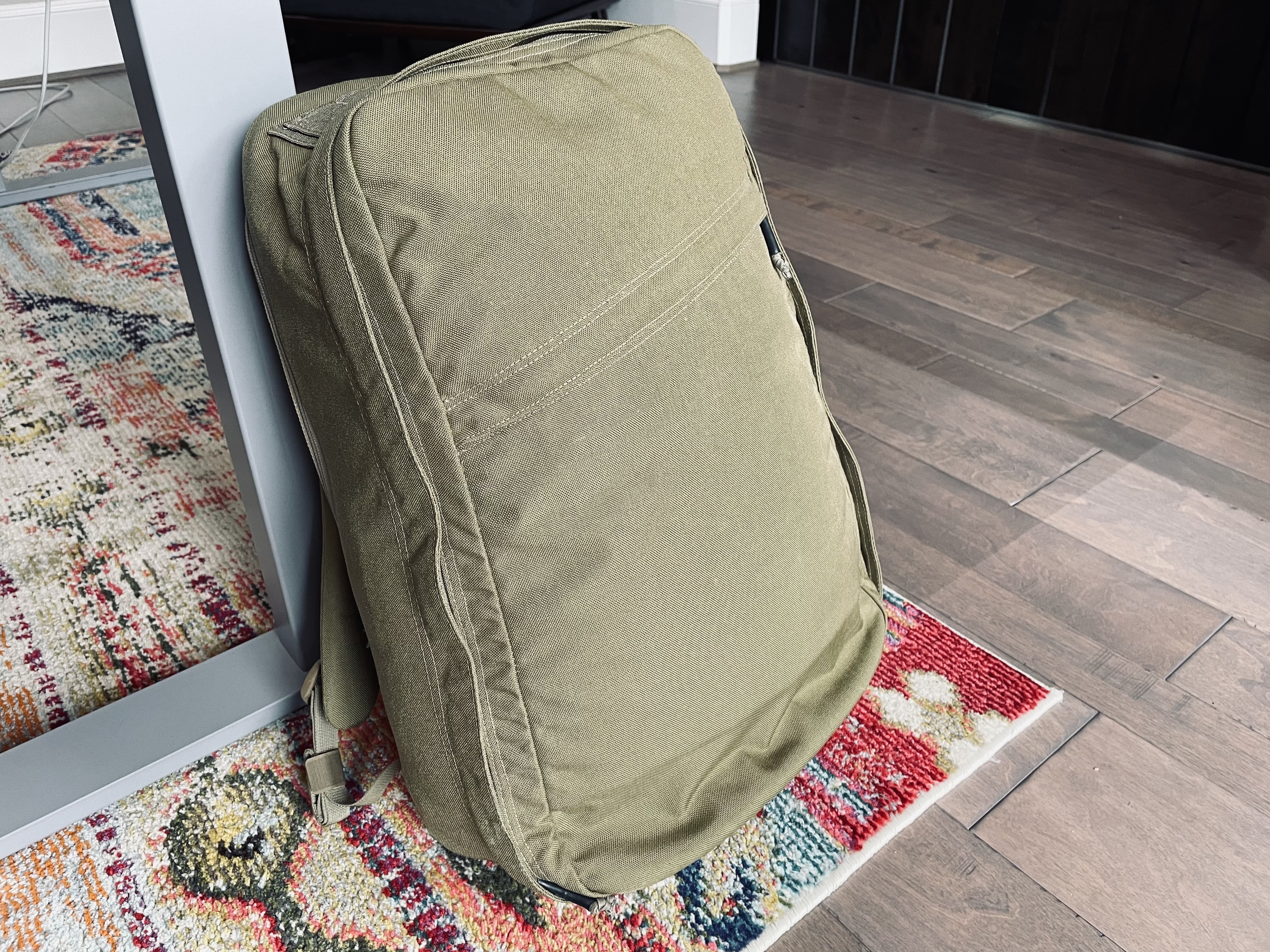 What’s hard is that on paper a slick GR1 looks like the perfect bag — the same but without the tactical vibe. In reality it is a bag with some issues. 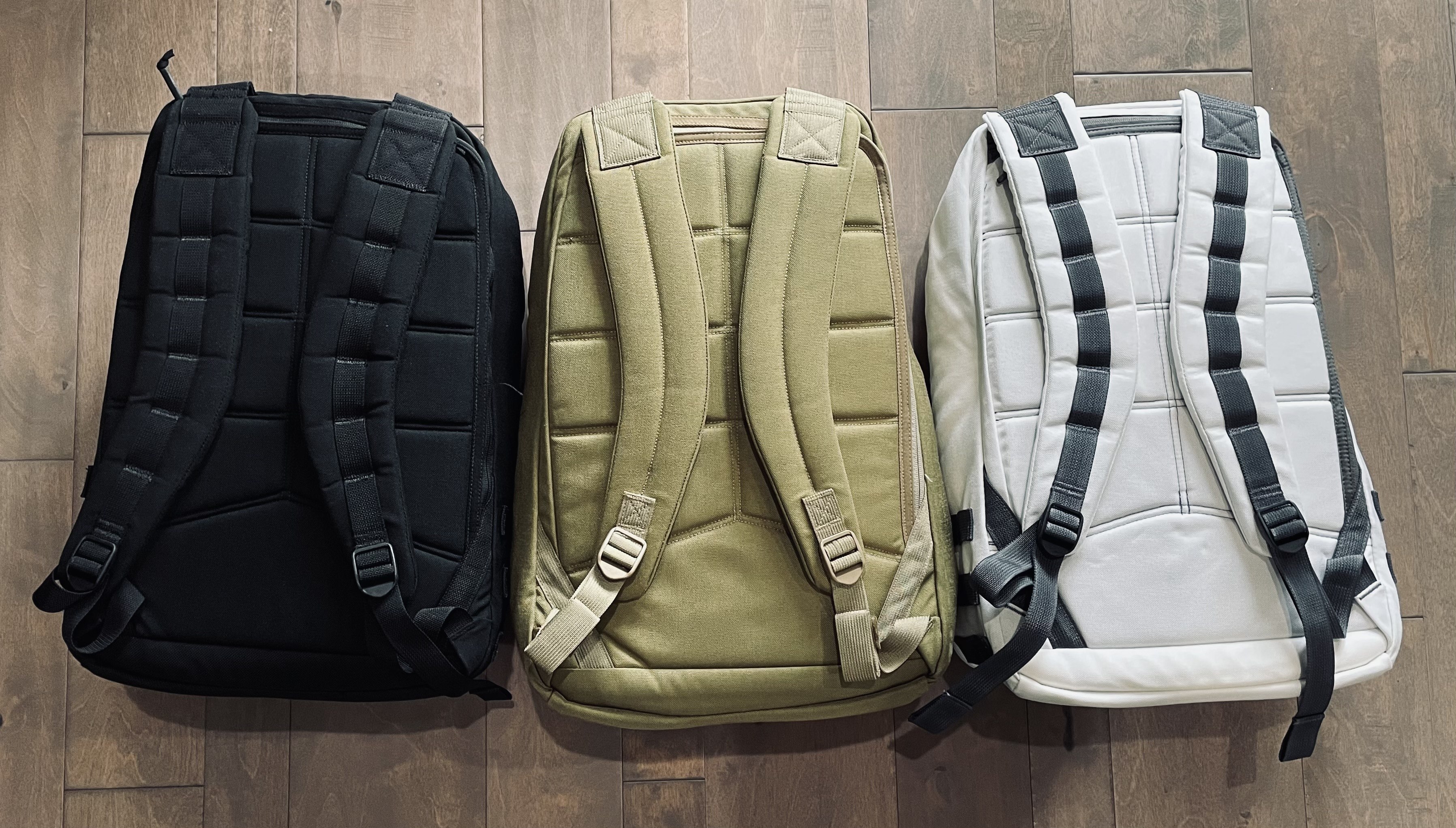 The lack of the vertical webbing down the straps causes two practical issues. The first is that the strap itself takes longer to break in and mold to your body, as the lack of dimpling from the webbing means it is more rigid to begin with. This is likely not an issue long term, and is short lived.

The larger issue is that functionally you no longer have an easy spot to clip anything to the straps. Either a sternum strap or sunglasses — there’s no spot to do any of that. For me this is the biggest miss on the slick version of the GR1 — losing this webbing reduces something that most people would find functional. In fact this isn’t even a tactical vibe removal, as most backpacks have webbing like this on the straps in some manner. It’s really a bad change to the bag.

I’ve always found the Slick GR1s to look too plain. For the original purpose (covert mission shit) this is ideal, but for the rest of the world this borders on boring. If GORUCK were to leave the morale patch velcro in place, you would get enough style to make this a great looking bag, while still ditching the tactical MOLLE vibe. 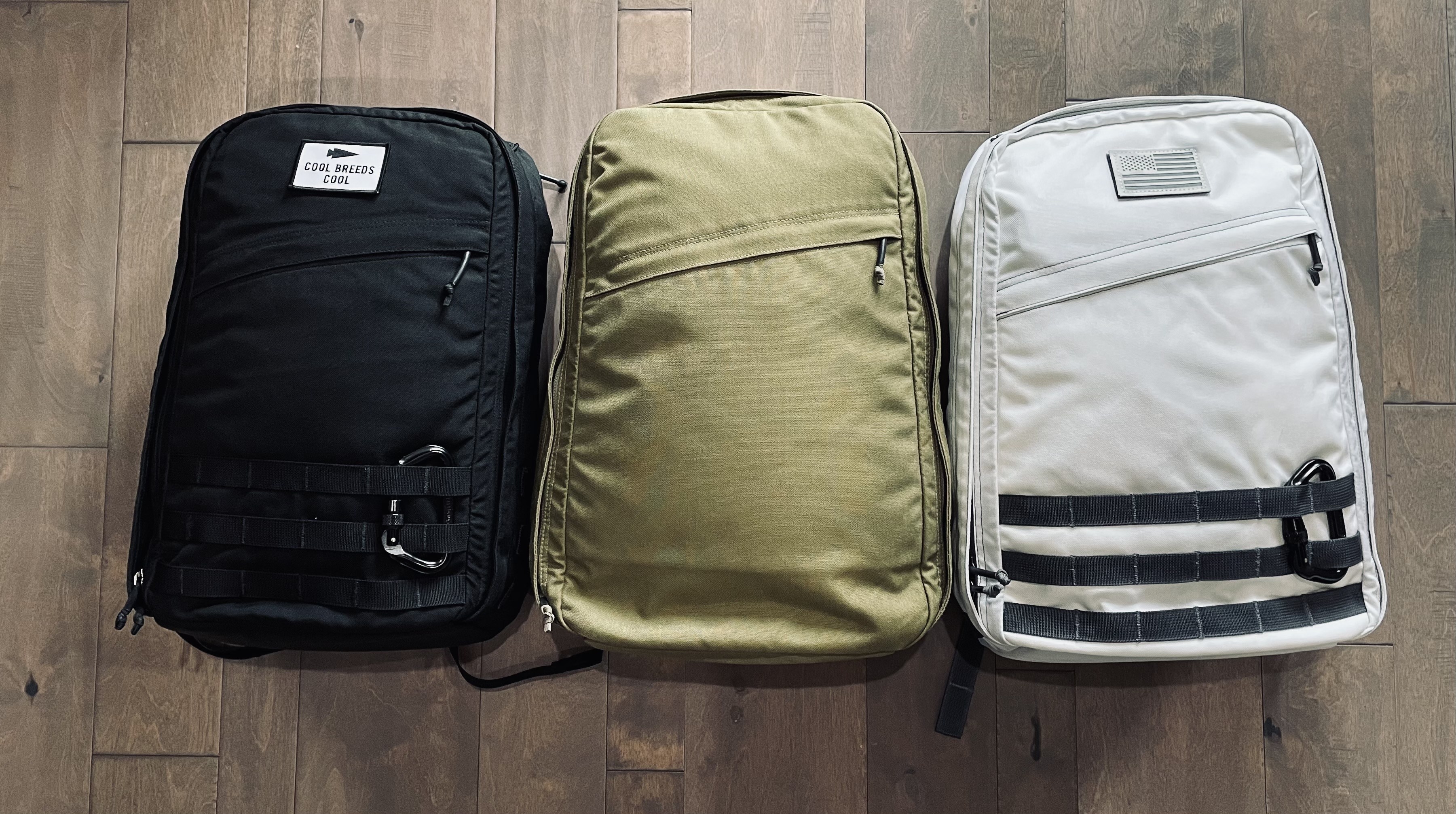 Either way, the slick GR1s are very plain looking. They lack the look and style of the classic GR1. And this is less about the lack of MOLLE and more about how large the area looks without anything but that single zipper to break it up. Add a spot for a morale patch, and that alone would be enough. (GORUCK actually has done this look before, but it wasn’t the same bag, it looks like this.)

On the standard GR1, there is a hidden pass through for water bladders. Underneath the handle at the top of the bag is a bit of velcro, open that and it reveals a slot to the main compartment of the bag — this is for a water bladder hose. It’s a neat feature that really detracts from nothing.

But for the Slick bags this is removed completely. Even though I don’t typically use this feature, it is something I love to have if I want to ruck with the bag, or hike with it. Meaning that this change functionally reduces the versatility of the bag — and that’s a shame. A smaller trade off than the two above, but something to keep in mind if you want a true one bag setup for travel/adventure. 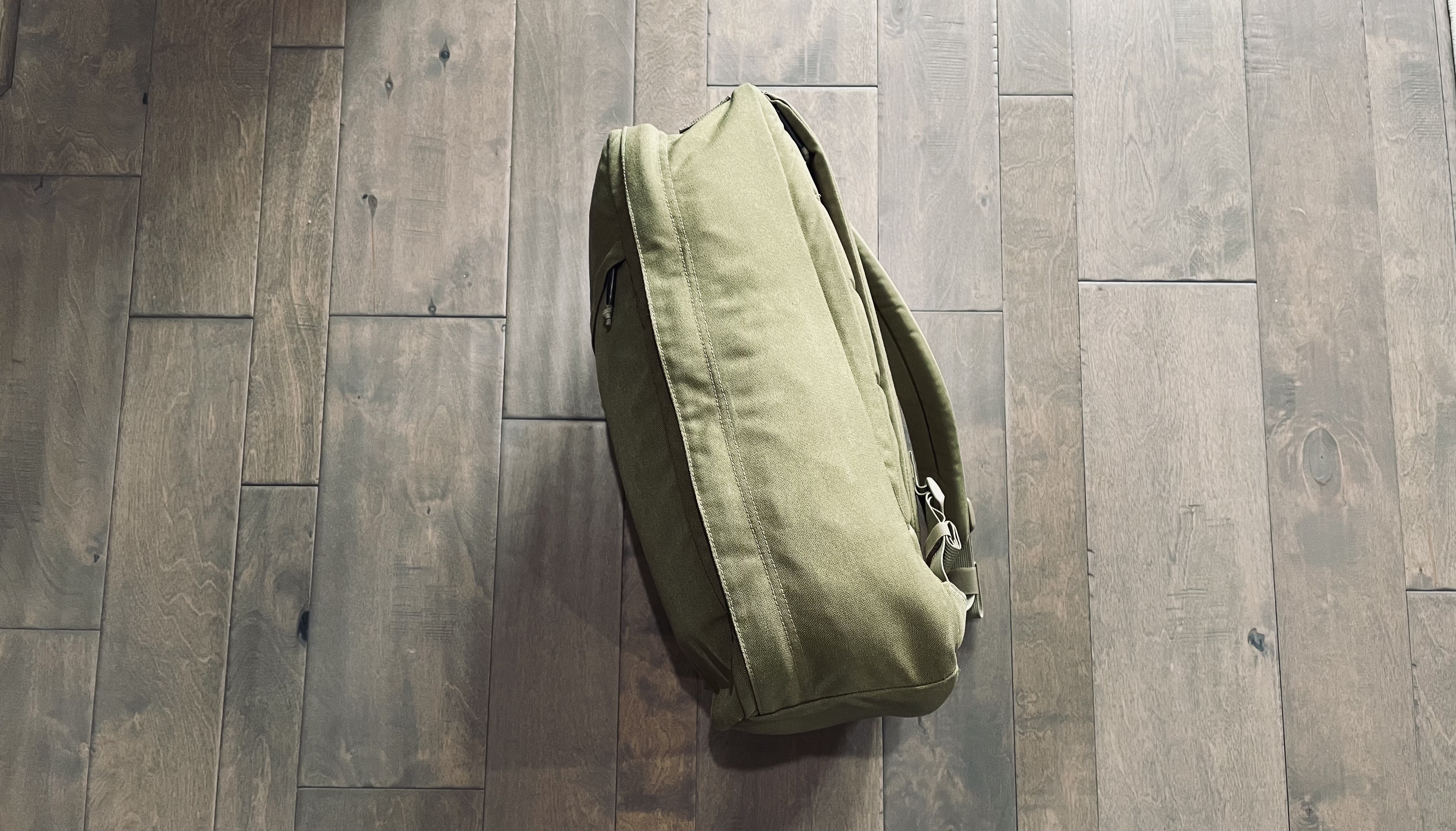 The reason people generally want a slick version of the GR1 is because they want a bag without tactical vibes. I get this, this was me in that first review above of the SK26. I wasn’t perfectly comfortable with the tactical vibes when I first got the GR1, and thought the Slick would solve it.

This I assume is also the reason people like Evergoods packs (which, again, I loathe their harness system and do not recommend their bags), as Evergoods are similar to GORUCK but without any tactical vibe. I get all of this, and can only say that I generally see more tactical looking bags than not, and never once have my bags been an issue for me. In fact, GORUCKs are among the least tactical looking of tactical backpacks. 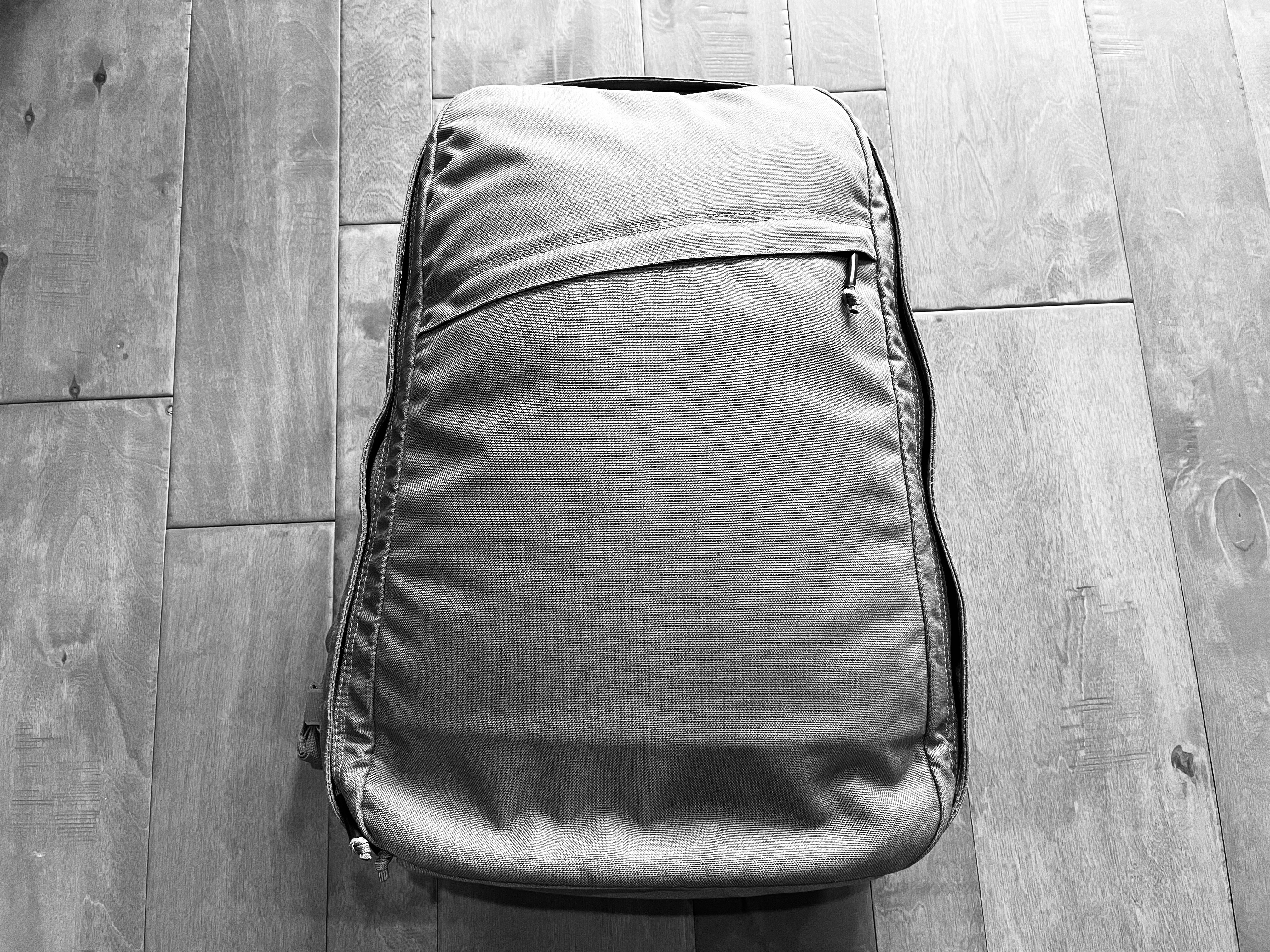 But for some that doesn’t matter.

Which is why I present an alternative option for you: get the GR1 slick in any color that isn’t black. You see that first SK26 review I did was of the black bag. But if you notice in pictures for this post there is a Coyote Tan Slick GR1 (actually an older SK26) — something I sought out and bought a used bag in like new condition.

Why? Because I think it looks great when it’s not black and achieves everything I want out of a slick GR1 variant. Right now GORUCK sells Coyote Brown which is a more modern color than Coyote Tan — that’s the one to get if you want a less tactical GR1. 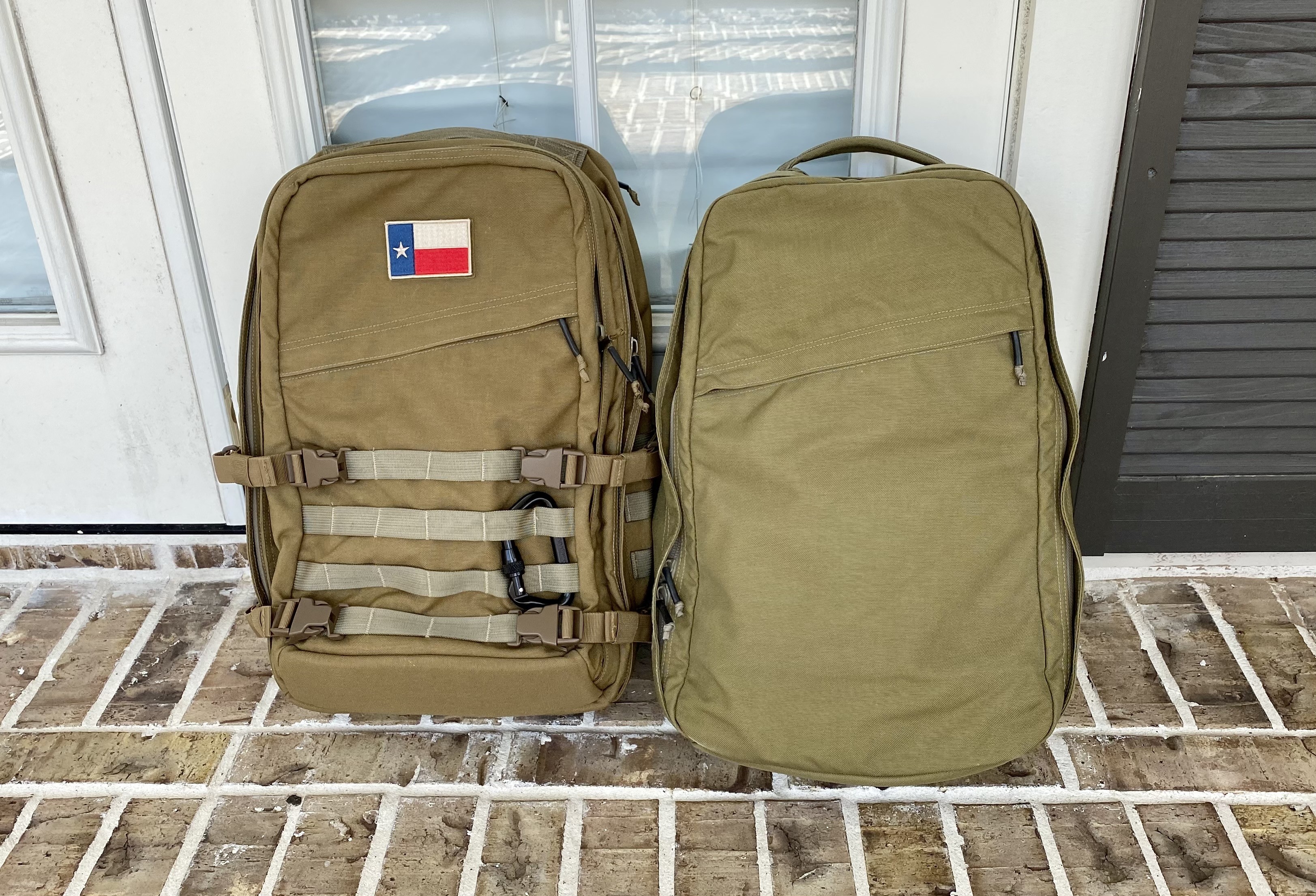 Except, you still have the trade offs I listed above with a Slick GR1 — and that might not be for everyone at this price point.

I got you though.

I present another option: get a standard GR1 in a crazy color. As you might notice these pictures also show my ‘Stormtrooper’ GR1 (Snow + Grey) and I really don’t think anyone will look at a white backpack and think “on no that is scary, it’s so tactical”. Right? Luckily GORUCK has made GR1s in tons of colors too, and a lot of obnoxiously bright colors too — find one used and you might stand out of a crowd, but at least not for being tactical.

Get a GR1 from GORUCK here, affiliate linked and ready to go.

GORUCK is now selling a heritage version of the GR1 with just this look. Awesome.