A super fun light, while still being useful — the new channel switching and tint ramping software is fantastic.

I am a big fan of the Emisar D4V2, but it has a larger sibling, the D4SV2 which is a chonky beast of a light that takes a beastly battery. I grabbed one as it was among the first ‘hank light’ to get the new channel switching / tint ramping version of Anduril in it. Let’s talk about both this light (it’s great) and the new tint/channel switching setups (it’s even greater). 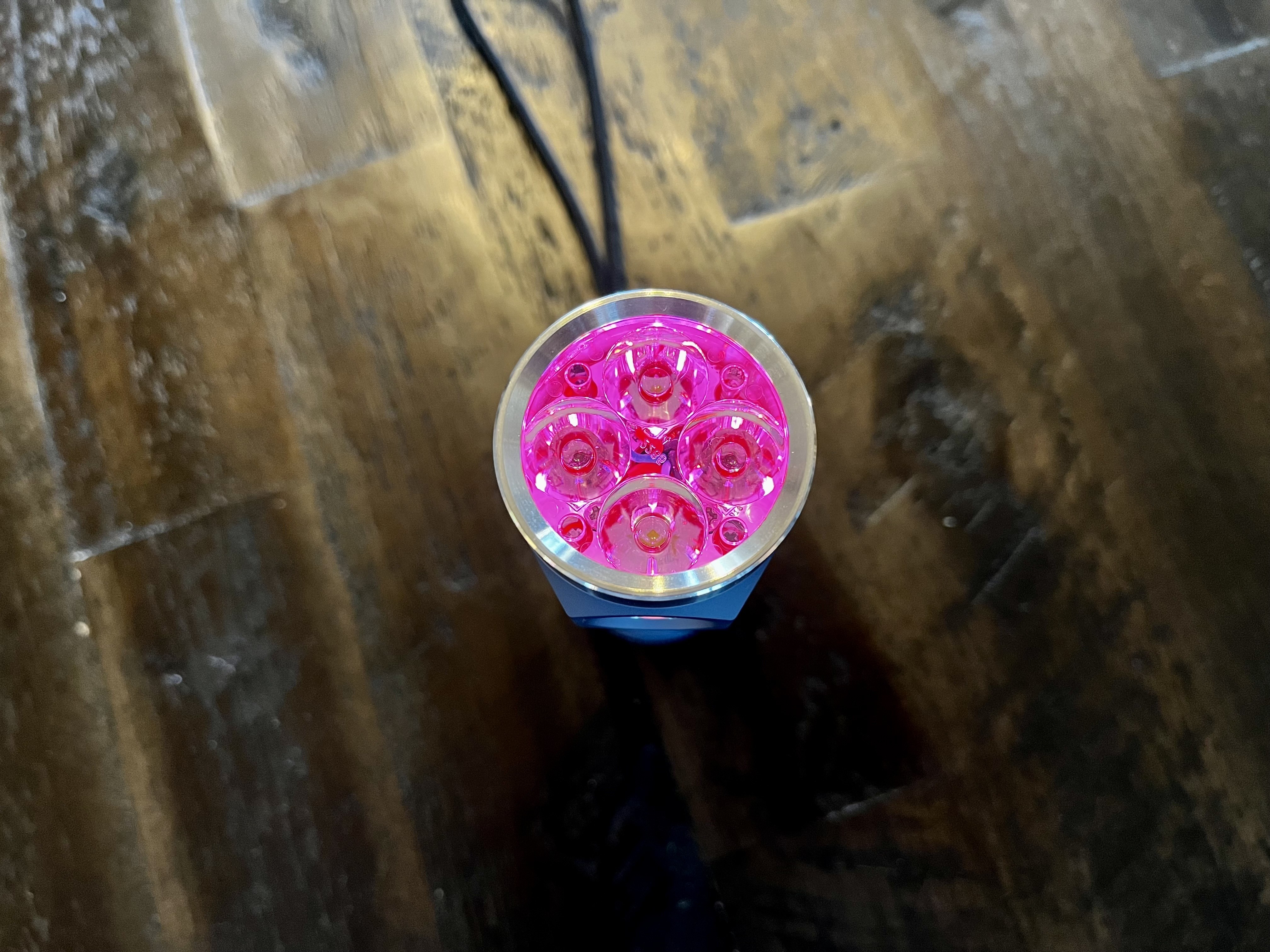 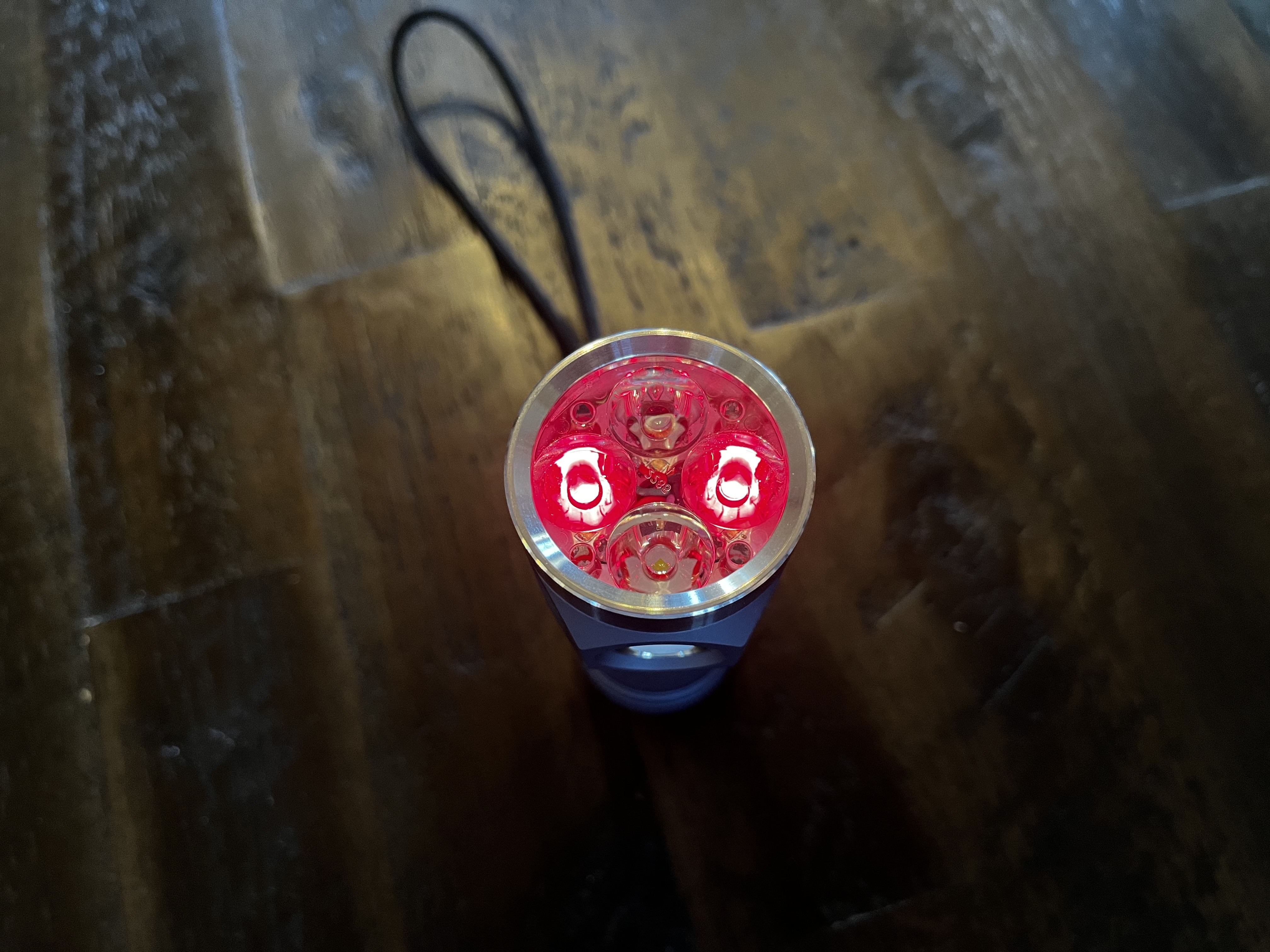 The D4SV2 is a four LED setup, just like the smaller D4V2, but much larger. Since I went with the channel switching version (which newer firmware supports both tint ramping and channel switching no need to choose and mine has since been updated to that) I went with two different LEDs: Channel 1 is the SST-20 in Deep Red; Channel 2 is the OSRAM W1 white. 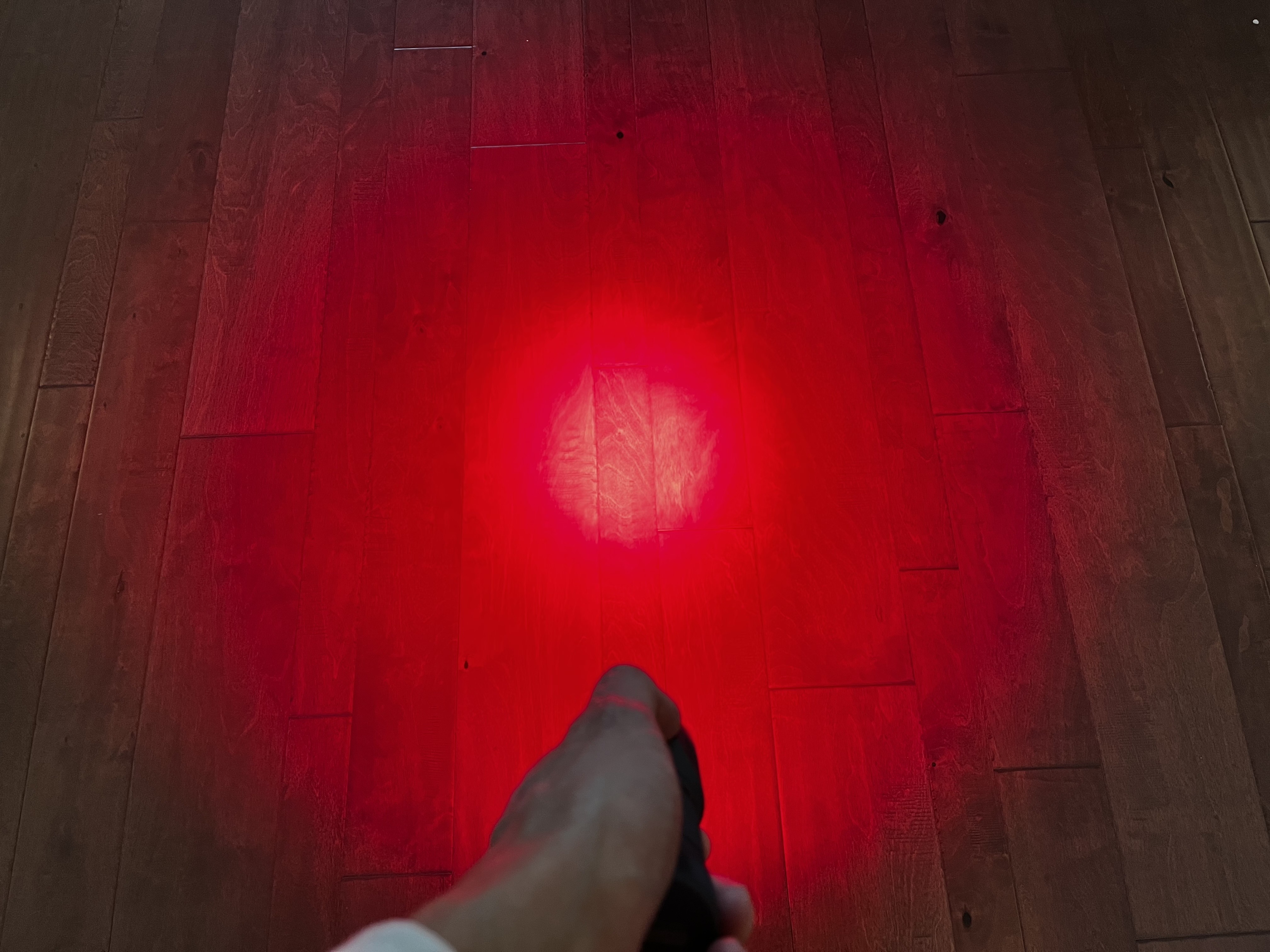 Deep Red, if it were any deeper, then, umm — it’s a great color.

The idea, or goal, with this setup is to make an ideal all around light that can handle close up tasks without too much light spilling over to bother others, while giving you a “wtf was that” mode. Essentially Deep Red offers you a very good close up seeing light. It helps to preserve your night vision while allowing you to run the light brighter. It helps to keep the light itself from traveling very far, thus not likely to disturb many around you when you are using it. 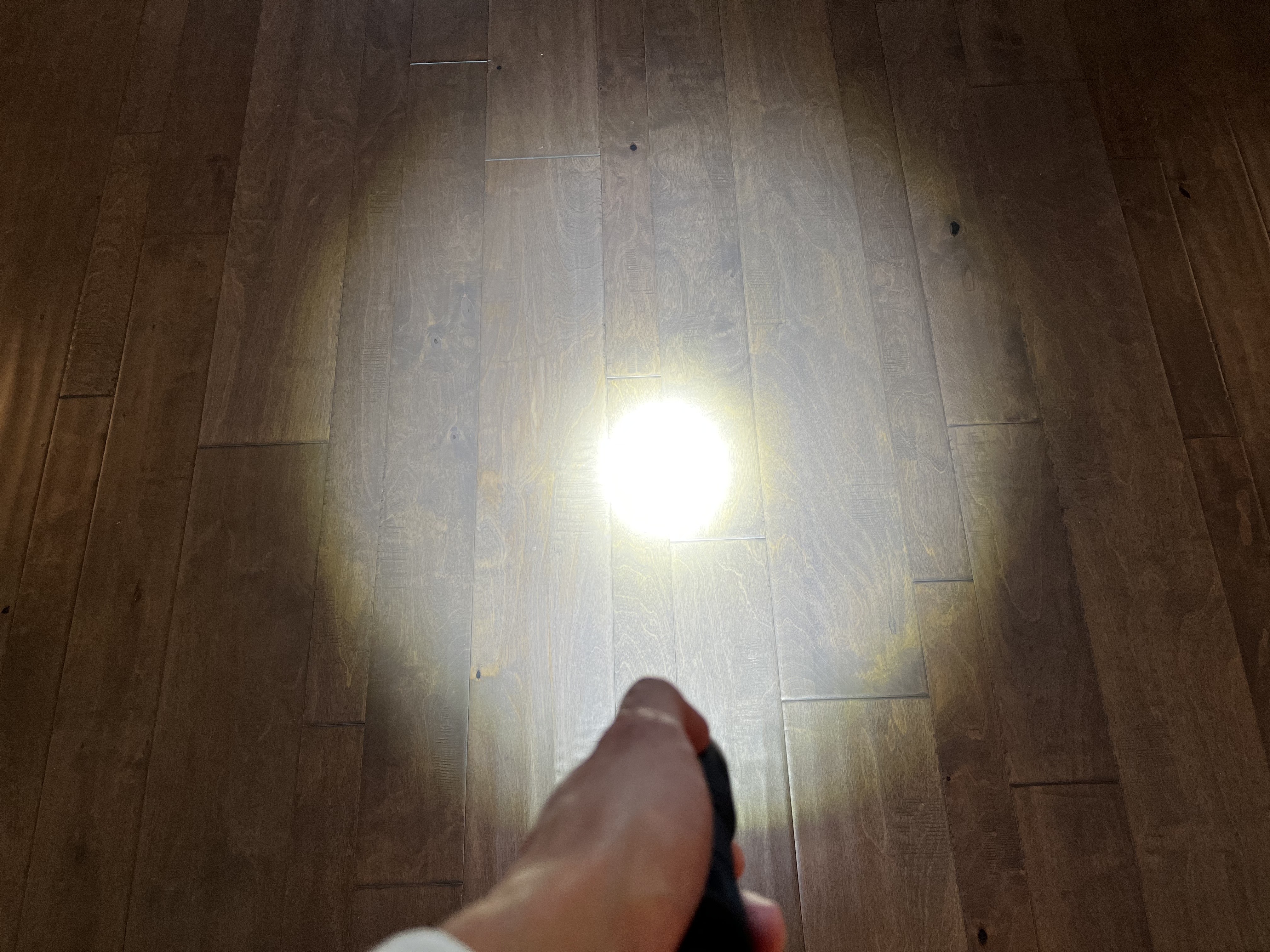 The OSRAM W1 6000k on the other hand is what the average person thinks a bright flashlight is. This LED produces a very white, and very narrow beam of light which travels and impressive distance, even when setup in an optic like this. I wasn’t sure what to expect from the W1, but I am overall happy with it. The light quality is very clean, and inoffensive. And it certainly performs well as a spot light type use. 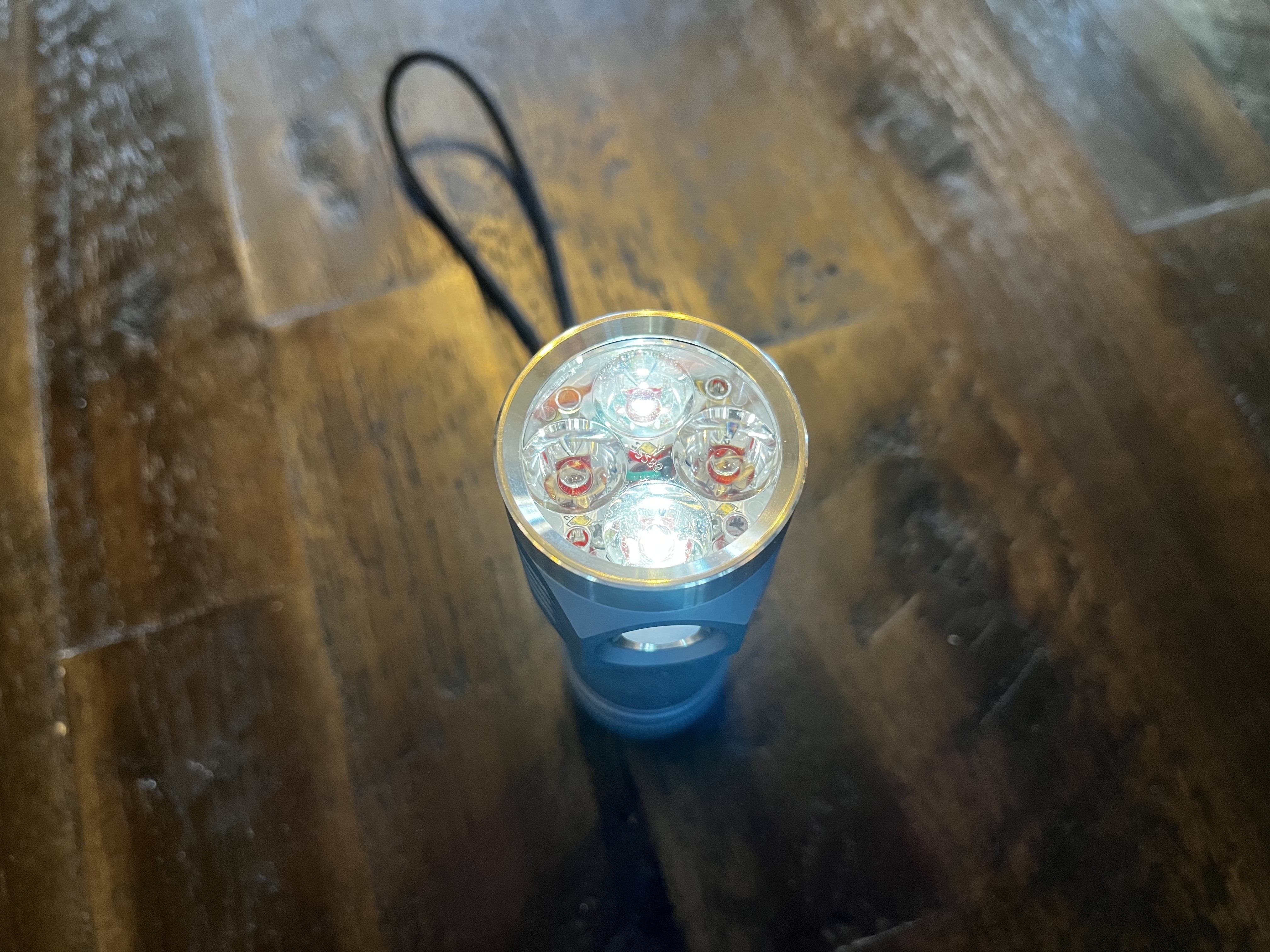 Both channels are powered by an unprotected, flat top, 26650 battery. This is a beast of a battery and can easily be had in 5000mAh and 5500mAh capacities. My only issue is that you can also readily find 21700 batteries in 5000mAh capacity and the 21700 sizing is much better than the 26650. In other words: for how massive this battery is, I would expect larger capacities than what I can currently buy. This is really the only downside for me, as even 21700 lights are not readily pocketable.

These lights come with a new version of Anduril which allow you to tint ramp or channel switch. Tint ramping is a method of mixing the two channels of lights, in the case of this light mixing the red with the white — which doesn’t result in pink here. On one end then you have full red, on the other full white. You can set the light at any point in between, maybe 20% red and 80% white? Something like that. This works best on lights using the same LEDs, but in different tints — so I’ll talk about this more later in another review. For this light specifically, if you tint mix the W1 with the Deep Red, you end up with something rather not useful. A red spill from the light, with a slightly pink white hot spot. Because these two LEDs have very different beam profiles, they simply don’t mix well. 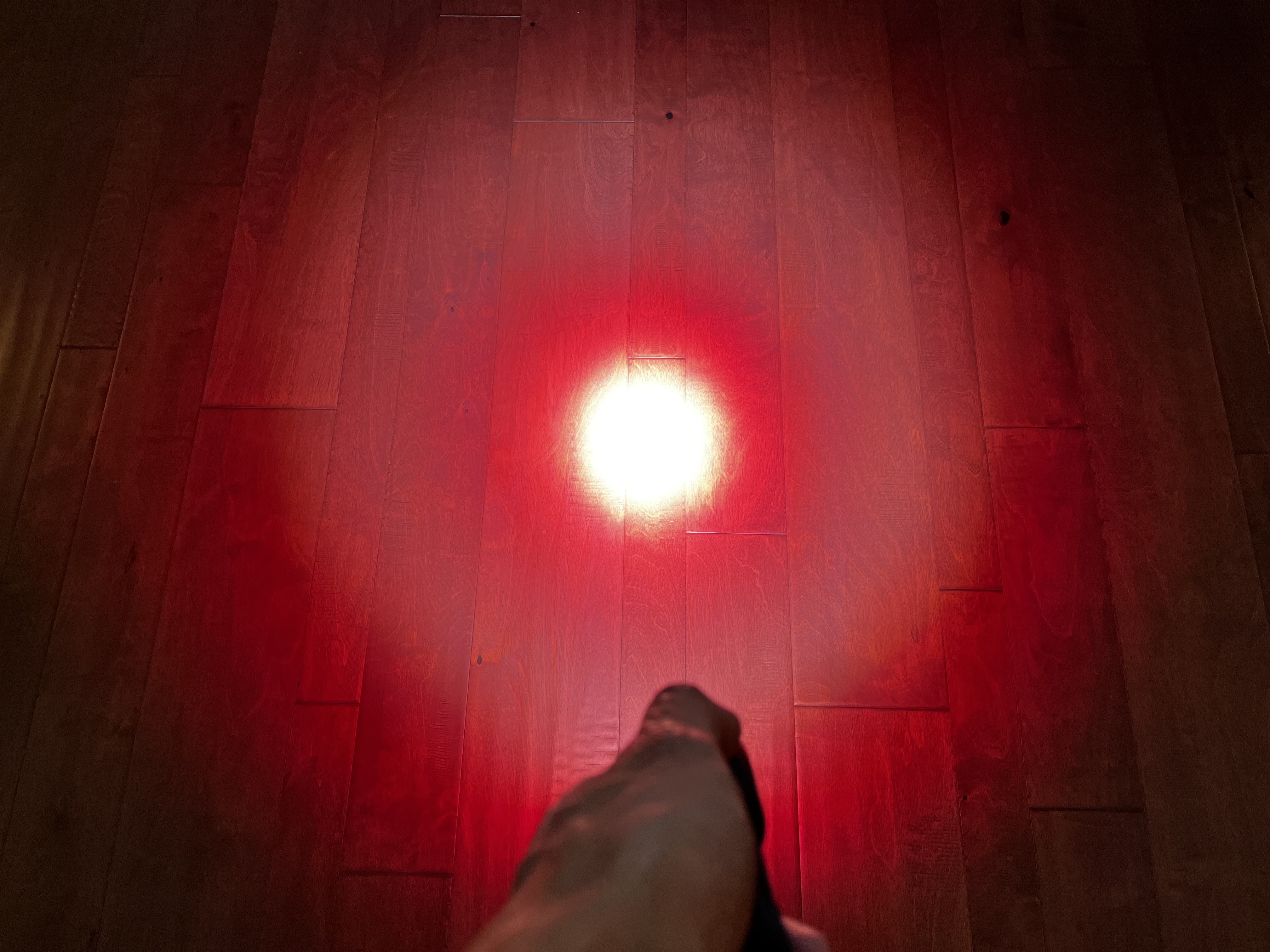 White and Red on at the same time. Weird.

Which brings us to the second part: channel switching. You can also set the light to be a channel switching light where you are only ever running two of the LEDs at a time. Thus the light becomes a Deep Red, or W1 light, and with a few clicks you can flip between those. This is useful if you are headed out to pee in the middle of the night when you are camping, using the Deep Red mode so as to not wake those sleeping in the tents at camp. But then as you are peeing you hear a disturbing noise, you can flip to W1 quickly and search out what made the noise. A very practical light.

For me, this setup is super handy. It gives me Deep Red, without handicapping the light to being only a Deep Red light. And instead of just tossing in another floody LED, it gives something pointed and different. It’s fun and handy at the same time.

Note that this UI control system, and the setups themselves, are really new and seem to be shifting around a bit. For instance when I bought this light, you had to choose if you wanted tint shifting or channel switching — if you buy now, you don’t have to choose. That said, you can flash these to get what you want if you bought early and have the tools and knowledge to flash them (it’s easy if you have an Android device).

There’s a few things that still need to be worked out, and are mostly firmware fixes:

I have hope some of these changes will get made over time, but right now it seems more feedback based on use is greatly needed. Should be fun in the long run, and it’s not bad right now.

As for the D4SV2 itself, I am a bigger fan than I thought I would be. It is quite a chonk, but it feels great in your hand. It’s very solid, and very nice. 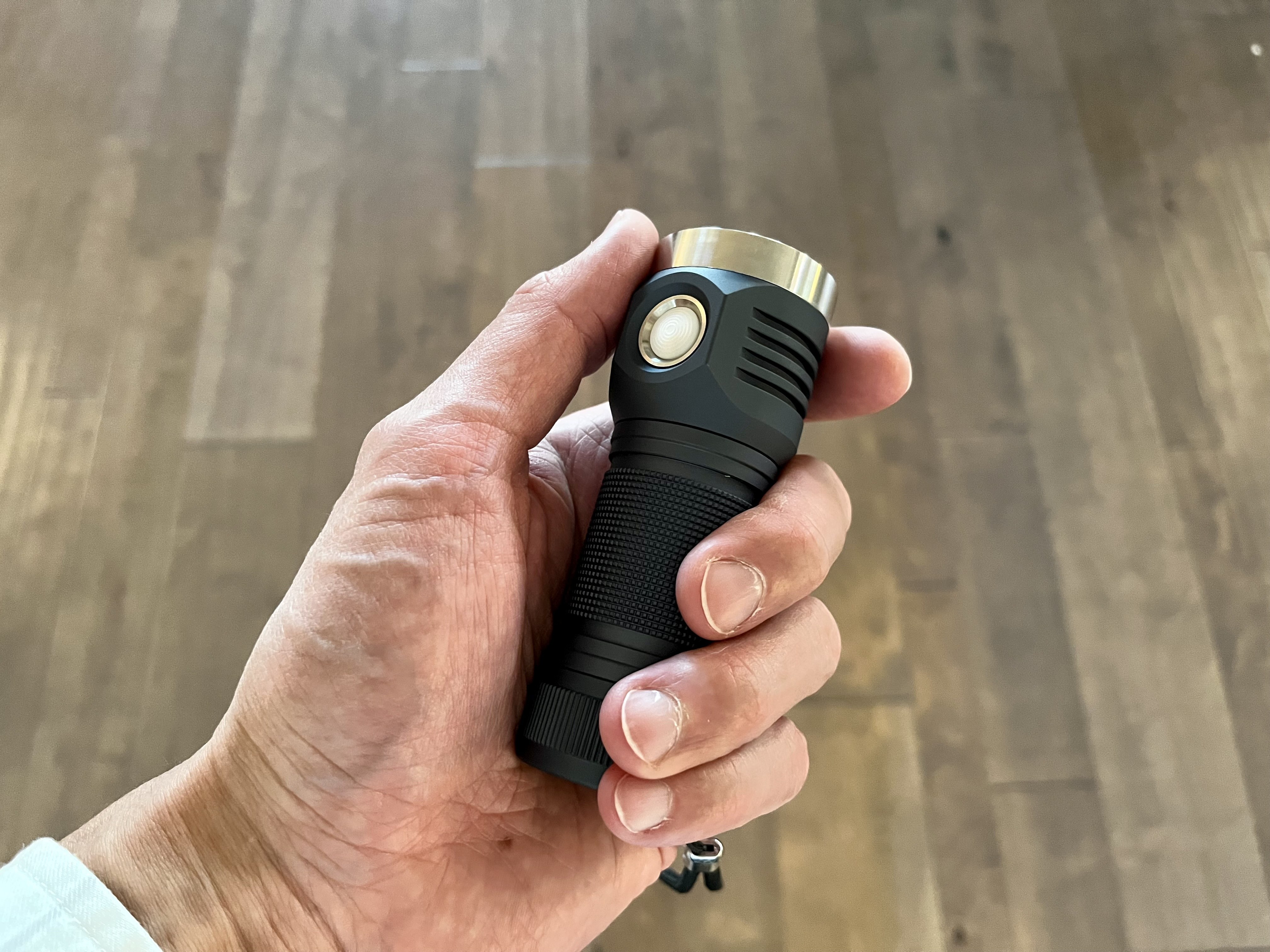 I got the stainless steel bezel for it this time, and promptly got it for many of my other Emisar/Noctigon lights — it’s a fantastic looking upgrade to the lights for a very low cost. 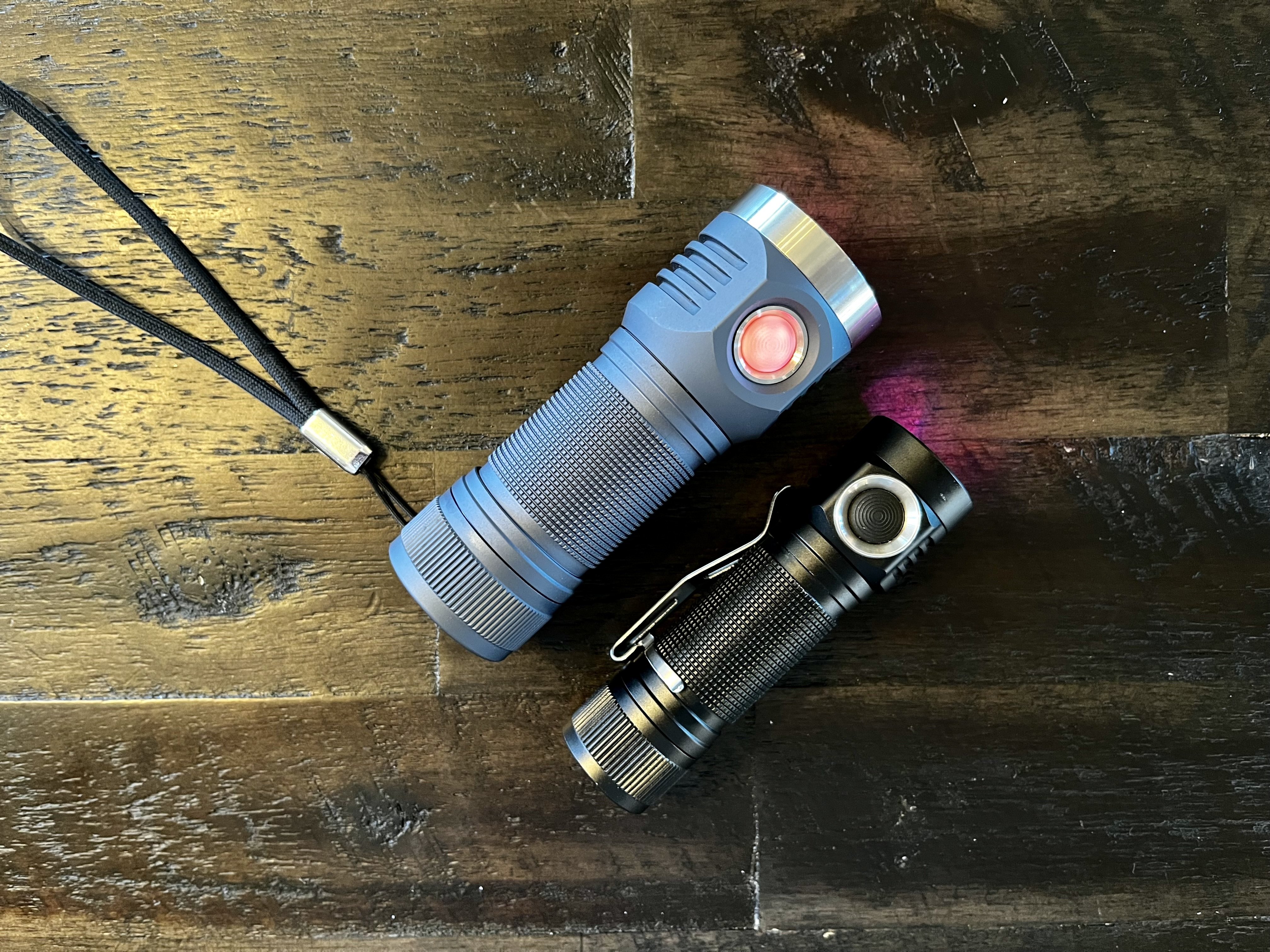 Compared to the D4V2.

While this light isn’t one you’ll be putting in your pocket, it does feel nice — reminds me a bit of a Maglite, though much smaller. Something I very much want to use, and is my light I keep readily accessible.

This light isn’t useful when you mix the two channels, but that’s my decision based on how I want to use the light. For channel switching, it is fantastic and really fun while still being useful. Having a light that still offers white, makes it something that is far more useful and being a ninja around my house in wee hours of the morning. 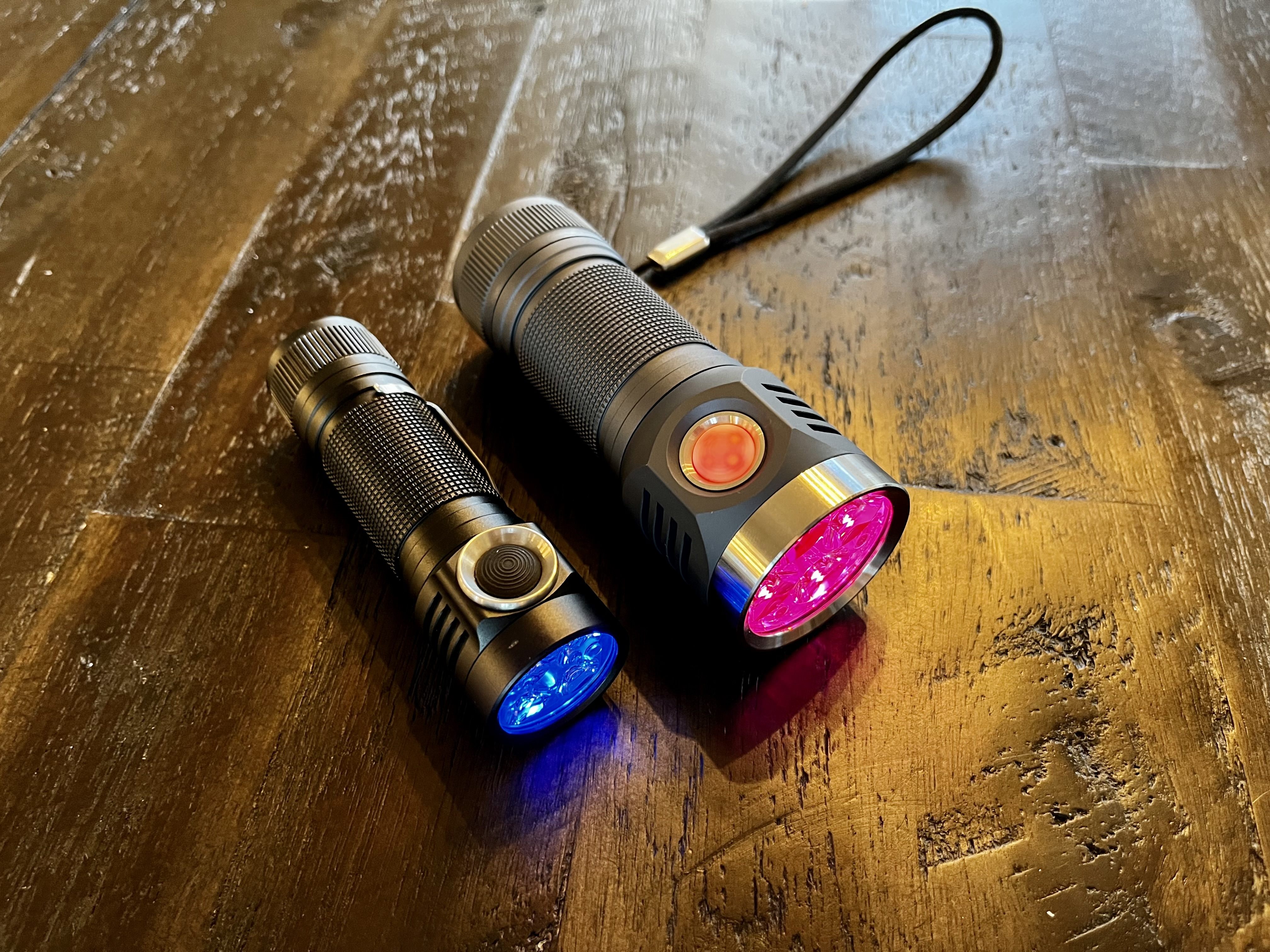 I thought I would regret going W1 on the second channel, but so far I have found it to be really great. The amount of distance you get out of those LEDs is impressive to say the least.

All in all, a pretty perfect setup especially if you are taking it outdoors.