Amazing fit and finish and an overall really nice knife — it’s a big knife though.

This isn’t my typical knife. When I go looking at knives I tend to focus on what I think I would use, and what I am likely to like the best — which means I buy a lot of knives that are increasingly similar to each other. Not a bad thing if you know what you like.

This knife, the WE Knife Co. Arsenal Frame Lock Knife in Gray Titanium/Green G-10 was a holiday gift from my parents and I have to say — not what I would have bought myself, but I am very glad to have it. This knife surprised me a lot.

This is a beast of a knife, but it’s quite good in a more than a few ways.

This blade is large, it clocks in at 3.56” and on top of that is the more aggressive tanto design. But at the same time, it’s a really great blade. 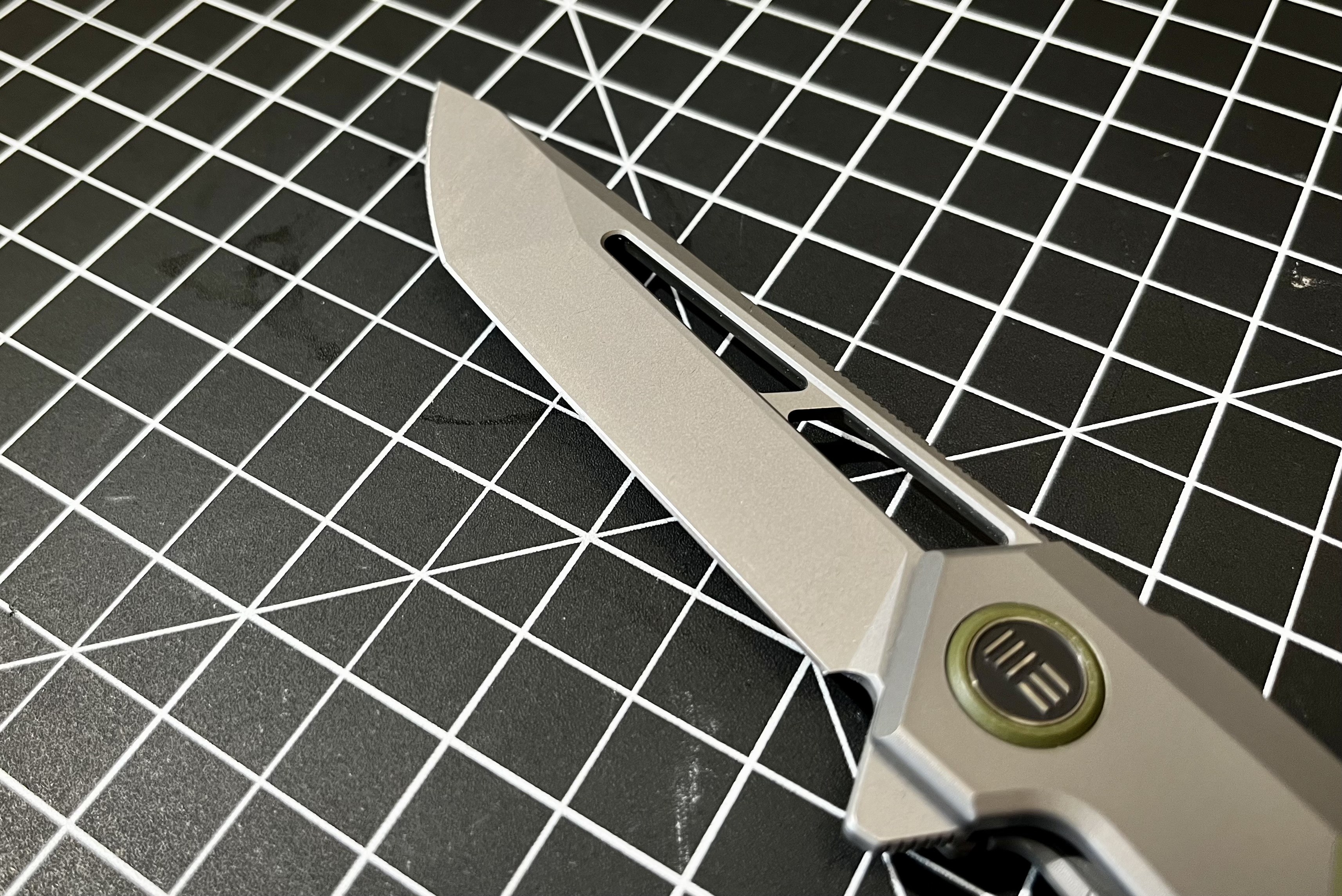 Made with CPM 20CV this is a high end steel, great edge retention and all of that. But the stonewash finish on it, and the shape of the tanto itself is what sets this blade apart for me.

If you notice on the picture above, the blade runs flat, and when it cuts to the point it does so not with a straight line, but with a subtle curve upwards to the final tip. That subtle curve makes all the difference for me with this design, and made that tip of the blade actually very useable for things like slicing open packages.

Which is a task that I typically find tanto blades to be lacking in, here with the Arsenal it makes quick work of Amazon’s attempts at packaging. This is easily the only tanto blade I have been happy with before, and I really know what to look for now.

This is a big knife, and the handle is big, and it weighs a decent amount. Here it is compared to the Benchmade Mini Bugout:

Yeah, it’s big no matter how you look at it. But that means it feels great in hand. It’s well balanced and offers a really secure grip. The G10 scales are well finished and sit nicely against the titanium. All and all, the handle is fantastic.

When you carry it though, well it can be tricky. The first trick is that the pocket clip attaches at the top with a little nut, seen here: 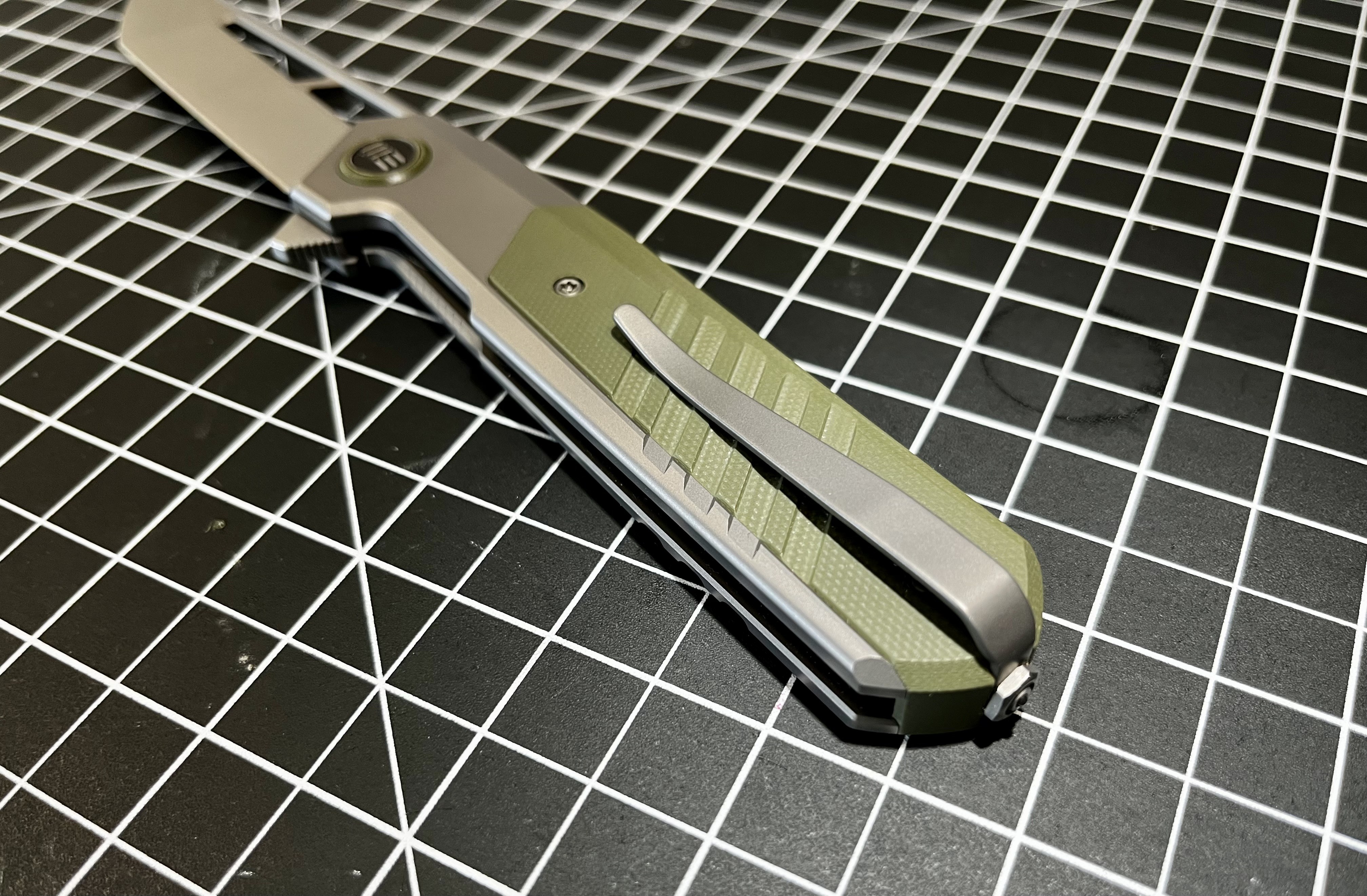 This method means that the heel of the knife that sticks up at the top of your pocket is anything but smooth. It’s got a slight ‘sharp’ edge to it. It was never and issue, but I always felt I needed to be aware of it.

However, even though that pocket clip looks a little delicate for the sheer size of the knife, it balances and works really well. Typically I can find a lot to complain about with a pocket clip, but this clip is solid. It offers good retention, easy to clip back into the pocket, and carries low enough.

But the size of the knife works against it. While it’s not too heavy to carry if you want to carry a larger knife, how low it ends up sitting in your pocket means your pocket might not be deep enough. On one pair of pants the knife needed to be canted at a forwards angle to seat all the way, and in another the bottom end of the knife constantly clanked against my car key as there was not enough gap between them, as there would be with a shorter knife.

It’s not hard to carry this knife, surprisingly, but it is a big knife to carry and you have to be ready for that.

Since I got this during the holidays, it is almost a super bowl like event for knives — there’s a lot to cut open. And I used this knife for almost all of it. It’s actually really good.

The flipper deployment is like butter to use, and is very impressive for the smoothness and ease to flick it open. And here’s the thing: like tanto blades, flippers are very hit and miss for me. But not here — this is excellent and I love flipping this knife open. Which is an issue because it’s a huge knife to be fidgeting with. 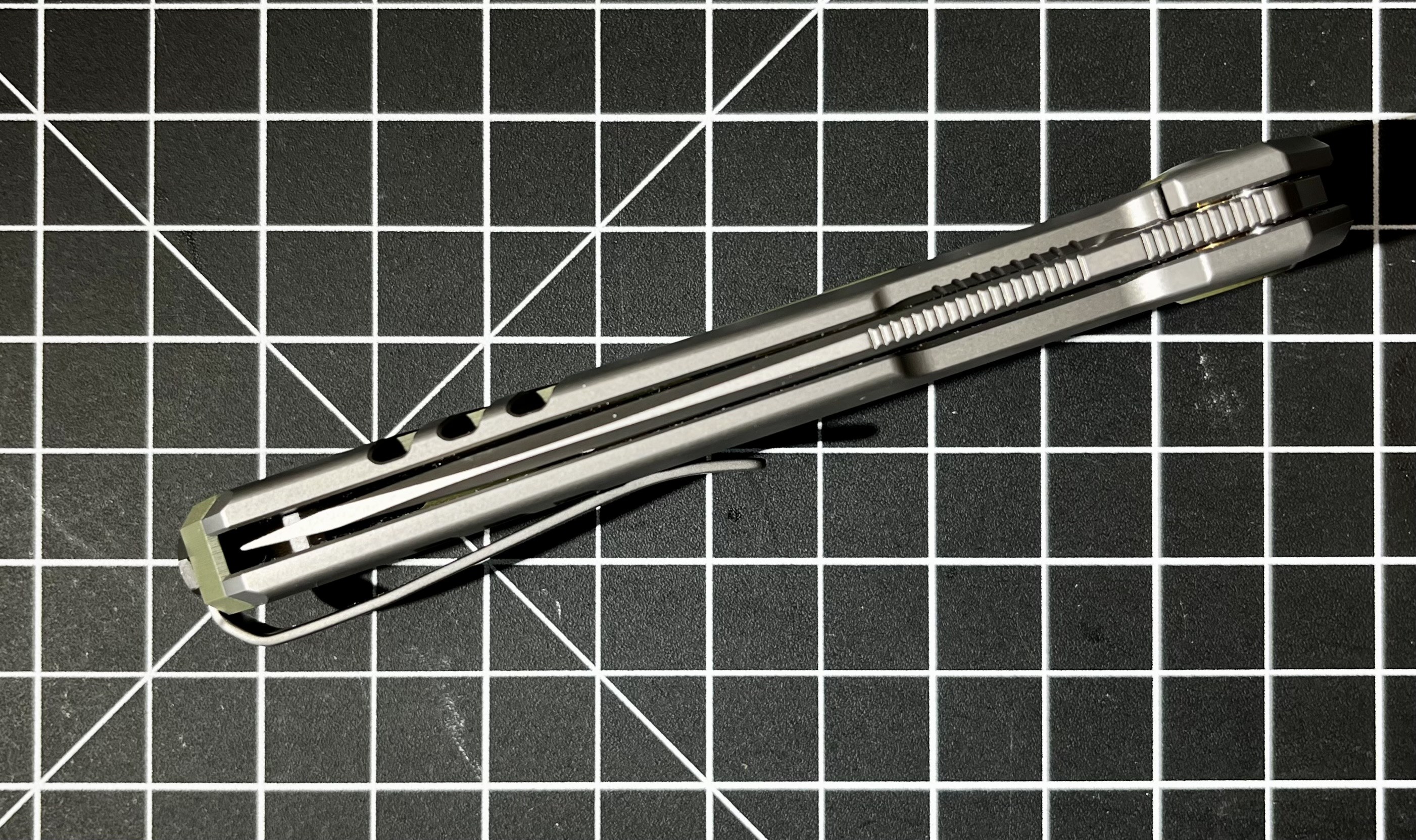 Perhaps more impressive is the fit and finish on this knife. It’s as good as any other production knife I have, and almost as good as any knife I’ve held. This is a knife that showed me I need to pay more attention to what WE Knives is doing, because they are making great knives. 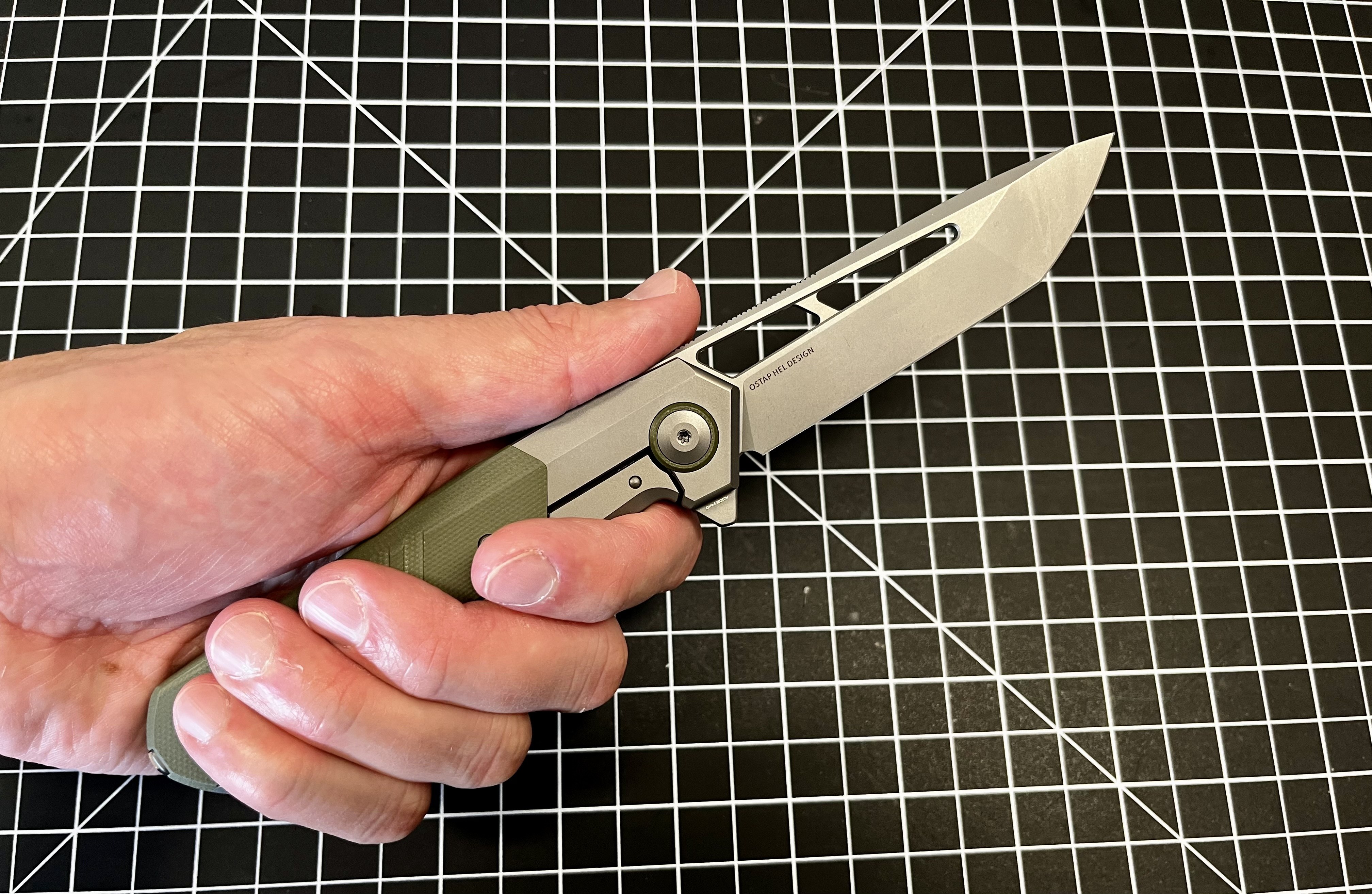 Tanto blades tend to not be good at box related tasks, as you rely heavily on the spot where the two angles of the blade meet to do this, but not so here. The curved front of the tip meant I could easily use the tip, controlled, to make most of the slices. For most that I did, the knife was too large, but I never went to change to another knife, which is a testament not to my laziness, but to the fact that this knife can get smaller knife tasks done when needed. 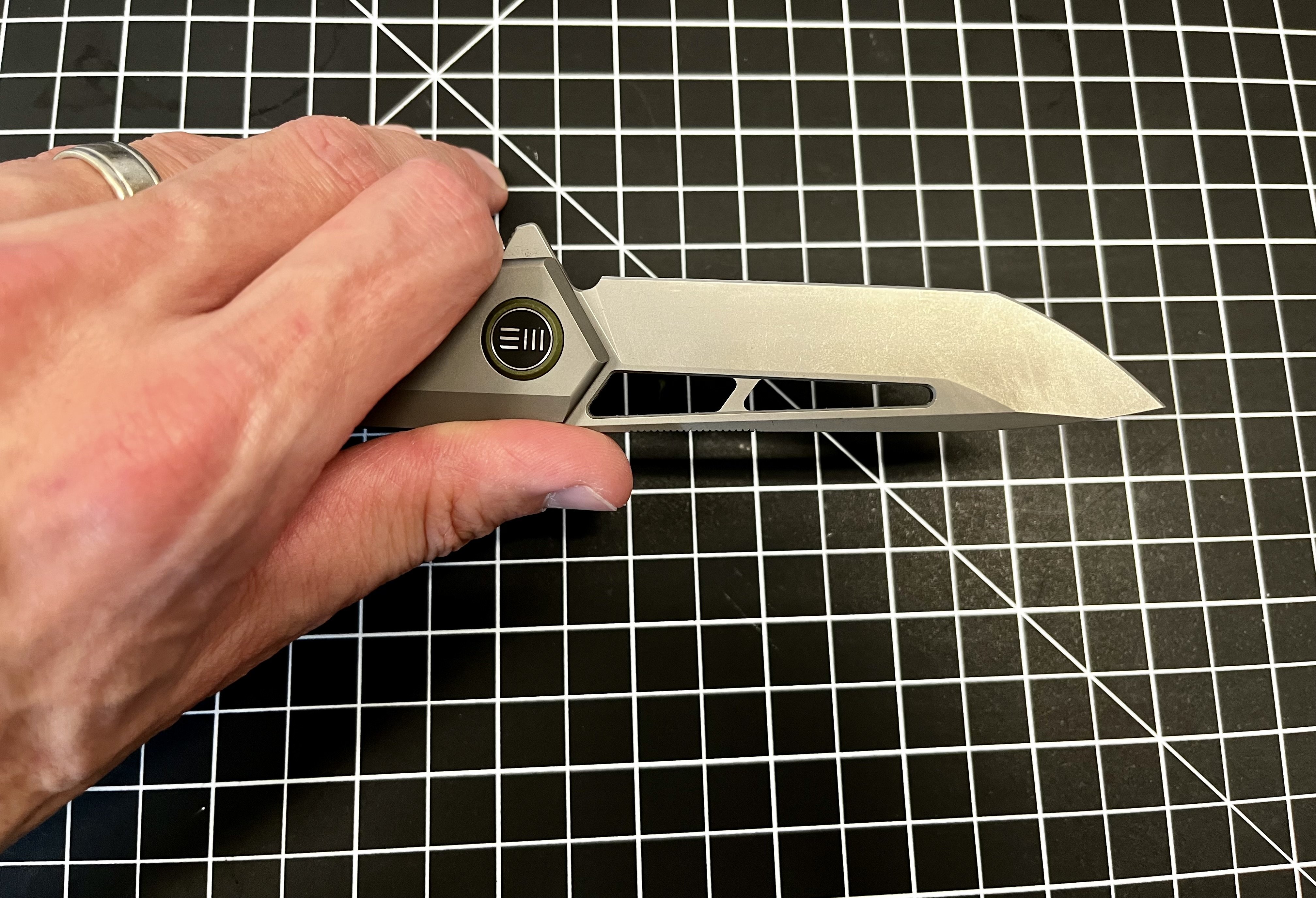 There’s nothing fiddly about this knife, and even the framelock being on the wrong side for a lefty, isn’t that big of an issue in practice.

I still don’t love tanto blades or flippers, but I do think this is an impressive knife and quite good as well. If it were smaller, I would be more than happy to carry this all around.

It’s an impressively finished knife as well, and when coupled with the high end steel — the value is there on this one. It’s in the collection for sure.

If you’re a big knife person, it’s worth taking a look at this, there’s a few different color combinations of it as well.