Could this be the best watch on the market? Possibly.

This watch is affectionately called the Casioak, or derisively called the Royal Broke — pick your pleasure — the real name is GA2100. There’s some watch enthusiast snark there, in that it feels like it was styled after the Audemars Piguet Royal Oak line of watches. But, the truth here is that this might be the best watch value out there, who gives a shit about why it looks like it does — it looks stellar.

For roughly $100, you get a watch which might be impossible to break under normal wear and use, and which still looks really sharp. There’s a wide selection of colors/models out there, I went with the non-USA market option which is all black with white indices (the USA variant has near black hands and the contrast is too low).

This is my second favorite watch right now, and neck and neck for my most worn — you can go get one and see for yourself or read on if you need more praise of it. 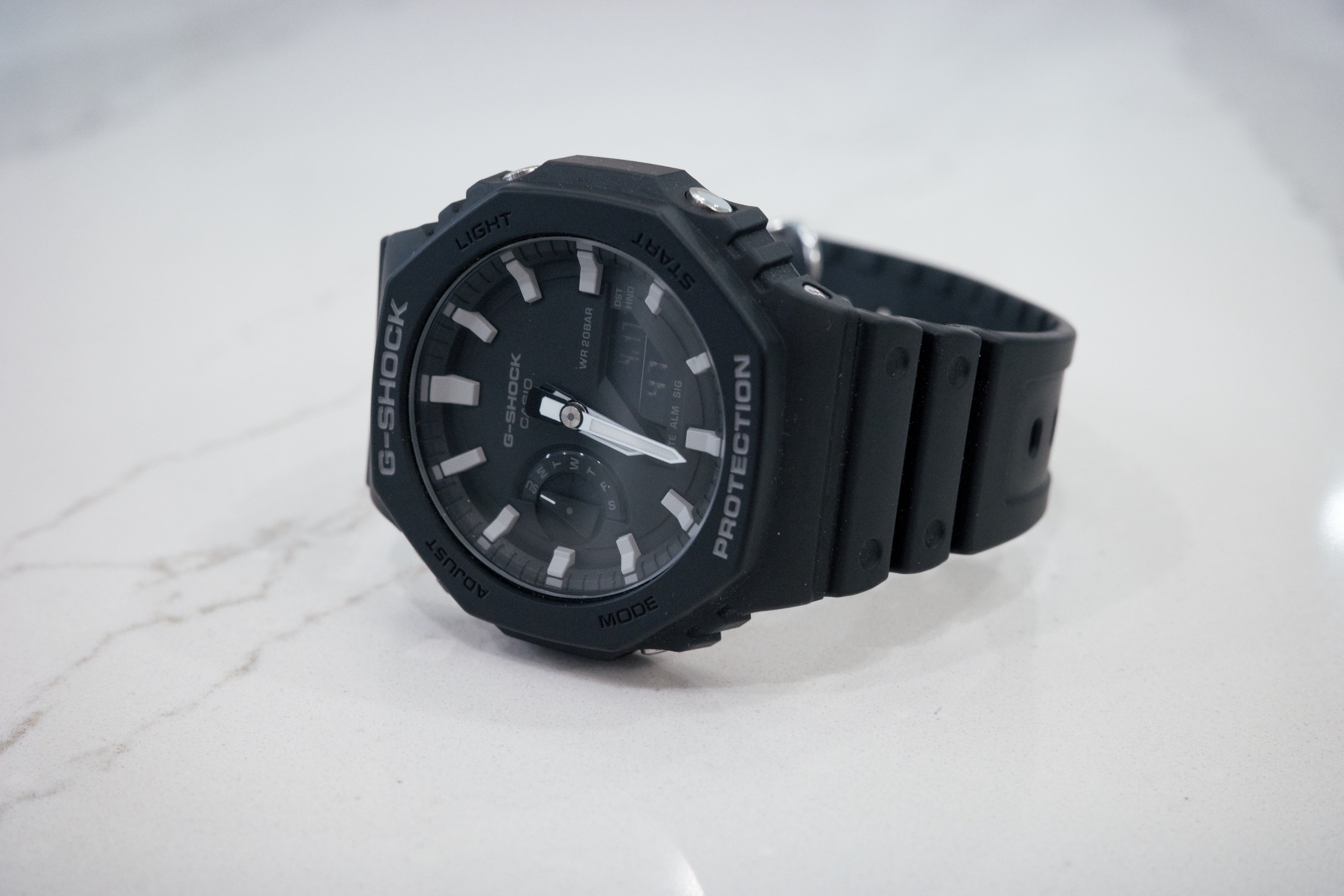 This is a quartz watch, which is protected by GSHOCK’s tried and true “carbon core guard” which is their way of daring people to be able to break it. It’s battery powered and runs at the standard plus/minus 15 seconds per month. This is quite literally the only downside of the watch: accuracy. 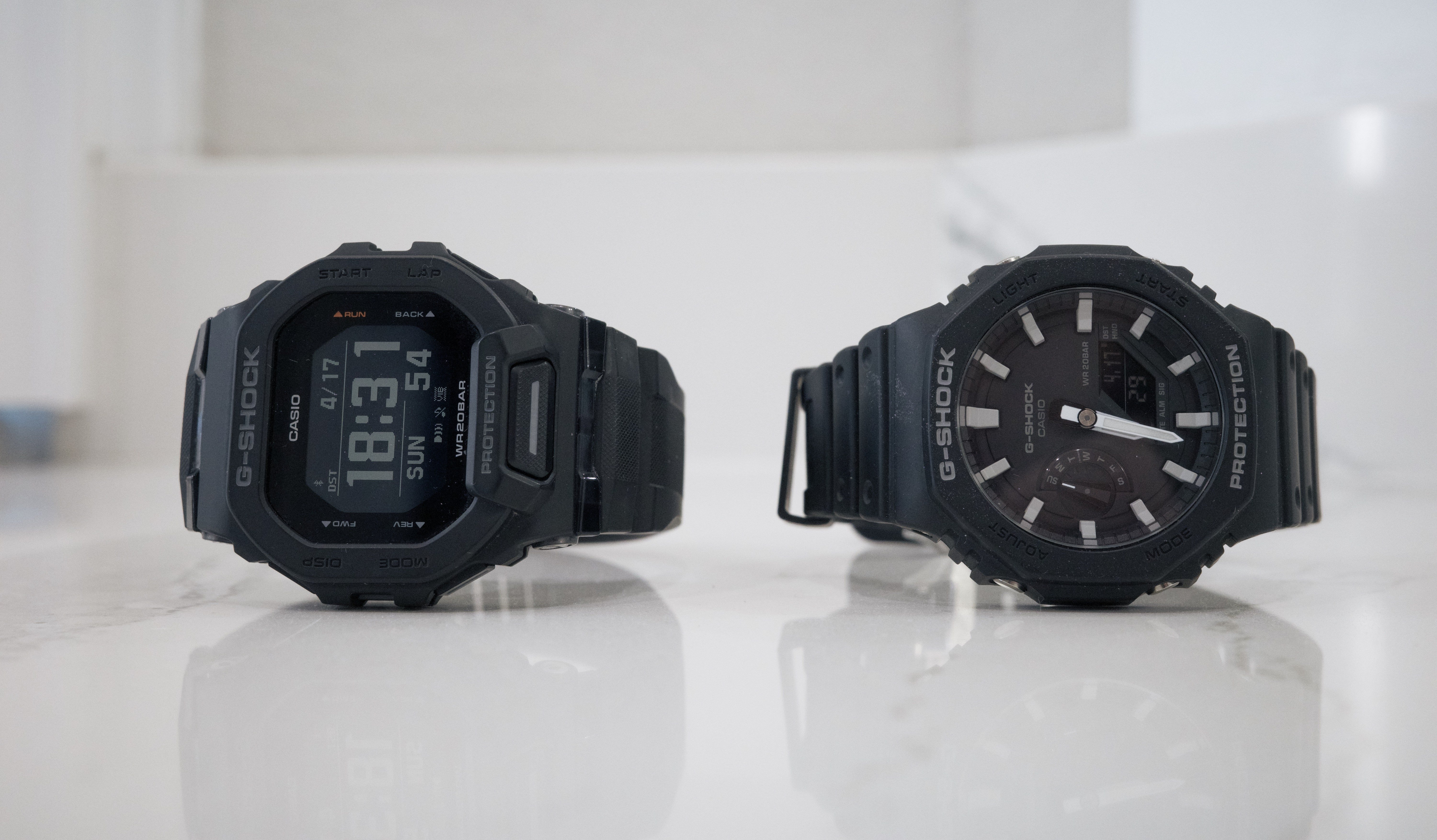 It’s a very thin watch for GSHOCK standards at 11.8MM thick — it easily slides under most cuffs. And even with the robust 45+mm case size, it wears much smaller — a trick GSHOCK often pulls off with great success (there’s a GMAS2100 model which is slightly thinner and at 42+mm case size). This watch clocks in at 51g — which the translates to it being very light.

The features of the watch are very tame by modern digital watch standards: alarms, LED light, world time, full auto calendar, stopwatch, countdown timer and that’s it. You don’t buy this watch for any of that, because it’s kind of hard to adjust all those things (stop watch is fine).

You buy this watch because it is shock resistant, looks great, 200m water resistant, and super comfortable to wear with the resin band. So let’s talk more about that. 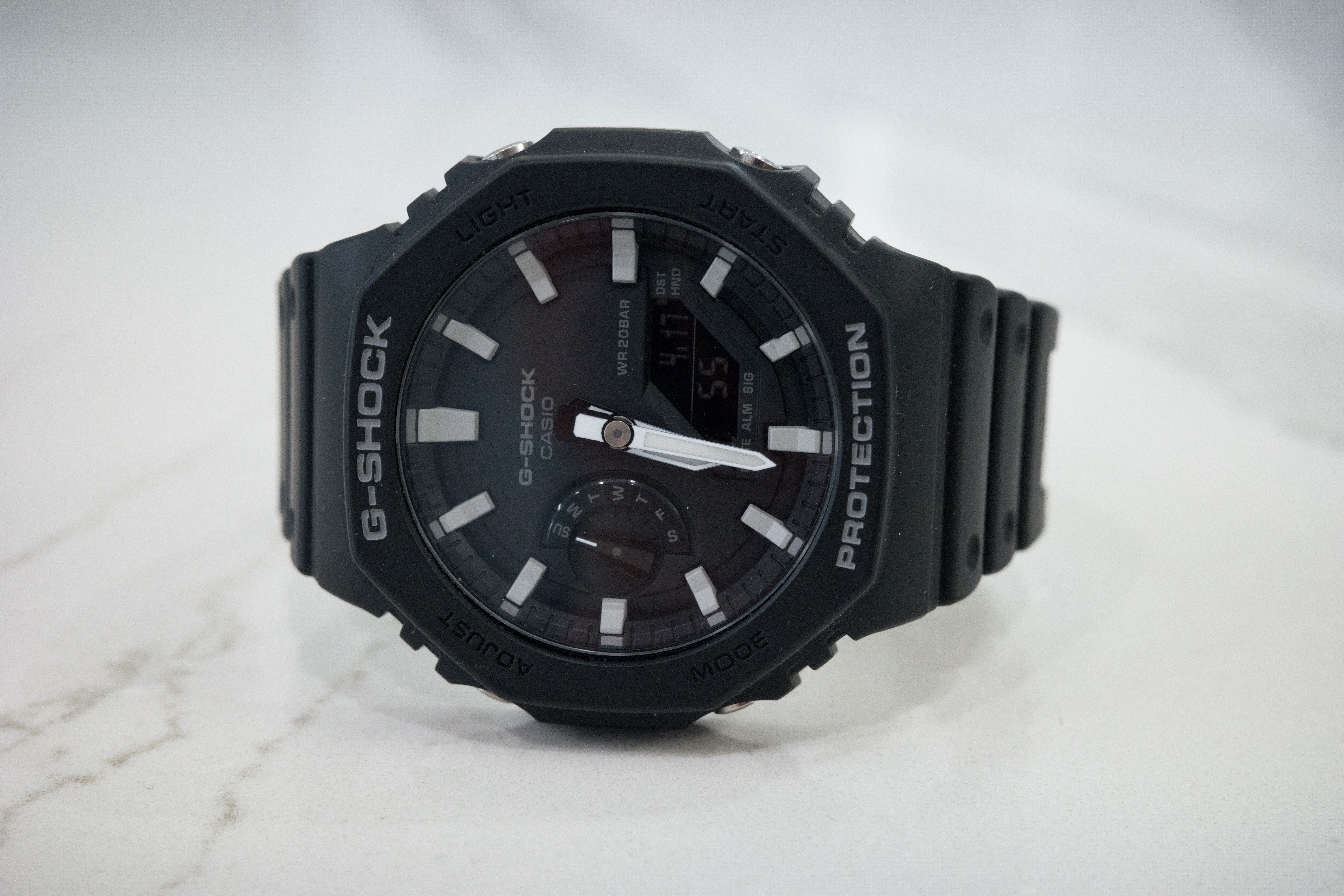 This is the most wearable G-SHOCK I have owned. The sizing is perfect on my wrist, and the slimmer nature of the watch means my shirt cuffs slide right over the top. The resin on this model isn’t quite as flexible/soft as some of the other G-SHOCK’s I’ve owned but it’s a minor nitpick. 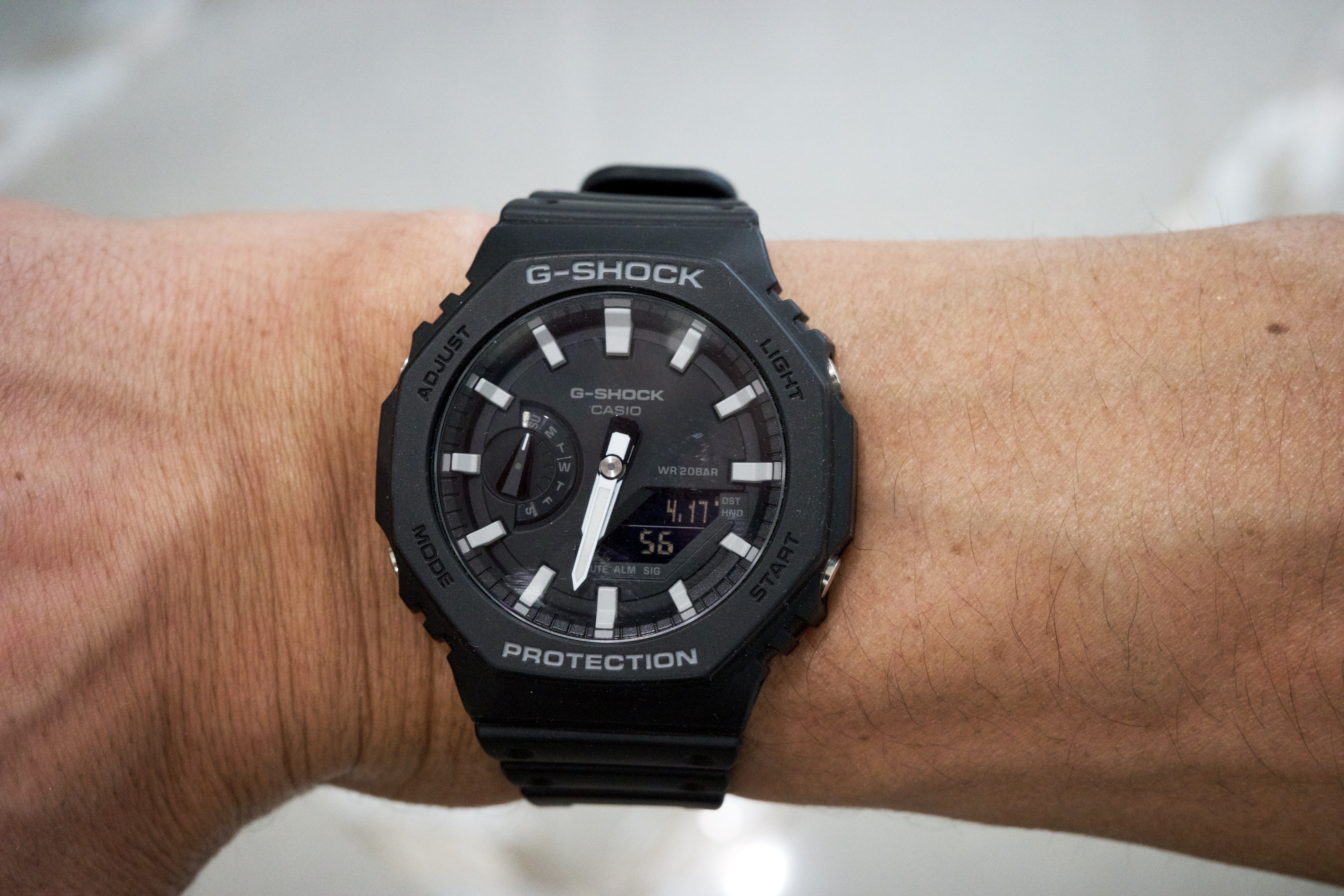 I do find the buttons a little finicky and small to reliably operate, which means it can be hard to get the illuminator to light up. That’s almost a good thing though, because I find the light on this watch to be entirely too bright. If you are in a dark room, it’s going to light it up — which is problematic for me if I wake up in the middle of the night and want to check the time without turning the room into sunrise. There are some aftermarket mods I have seen to change this LED to another color (red/amber being ideal) but I’ve not undertaken this yet.

The hands have ok lume on them, they aren’t going to last all night, but they will work for long enough that most won’t complain. However the indices are not lumed, which is a bummer. Again, there are aftermarket options for this, I’ve not jumped at any. 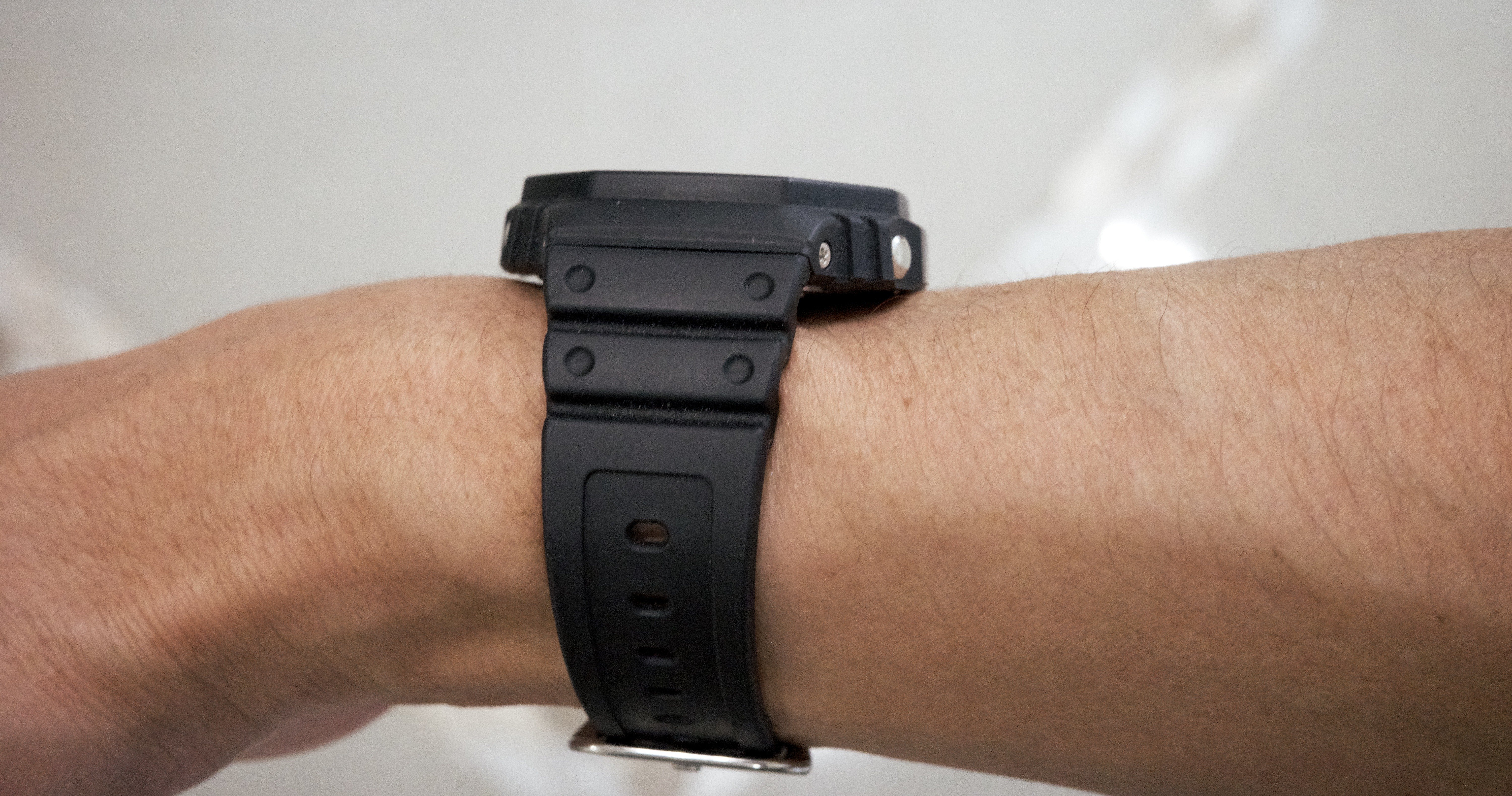 Because of the button issue, it’s harder to set the timer on the watch, and thus not really a practical thing to rely on if you need to quickly set timers. There’s really nothing else to talk about it: it tells time and date, and does that really well, with great simplicity.

I’ve struggled to write about this watch because I absolutely love it. It’s one of my favorite watches I own, and one of my most worn. That said, it’s also hard to say why I love it that much. It’s simple, and doesn’t do much, and that’s really the beauty of it. It’s everything people love about G-SHOCKs in a really lovely package, all for about $99.

I highly recommend it.

See them here, find them all over.