One of the best folding knife blades I’ve used, but there’s a few caveats to go along with that.

I saw a couple of these ‘Acta Non Verba’ knives show up on Reddit, and then while browsing through posts I saw that the ANV A100 comes in a CPM MagnaCut variant. It is quite a premium over the ELMAX variant, but MagnaCut is a fantastic metal. What I wasn’t expecting is, well actually I wasn’t expecting basically anything about this knife. 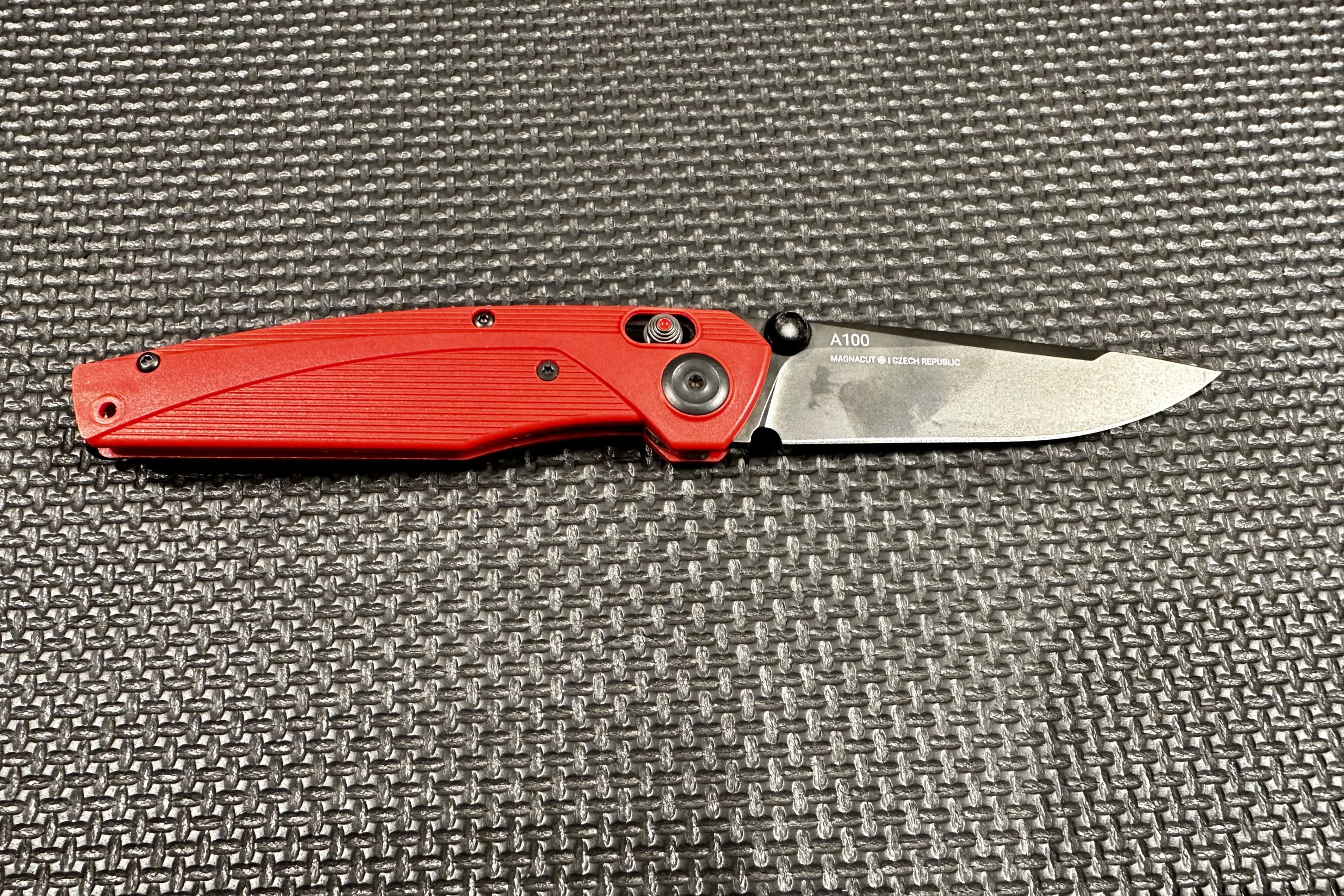 Before we dive too far into this, here’s what we are working with. CPM MagnaCut with a 3.5” blade length (3.375” cutting edge) and 4.75” handle length. The scales are Polymer and the lock is essentially the AXIS lock. 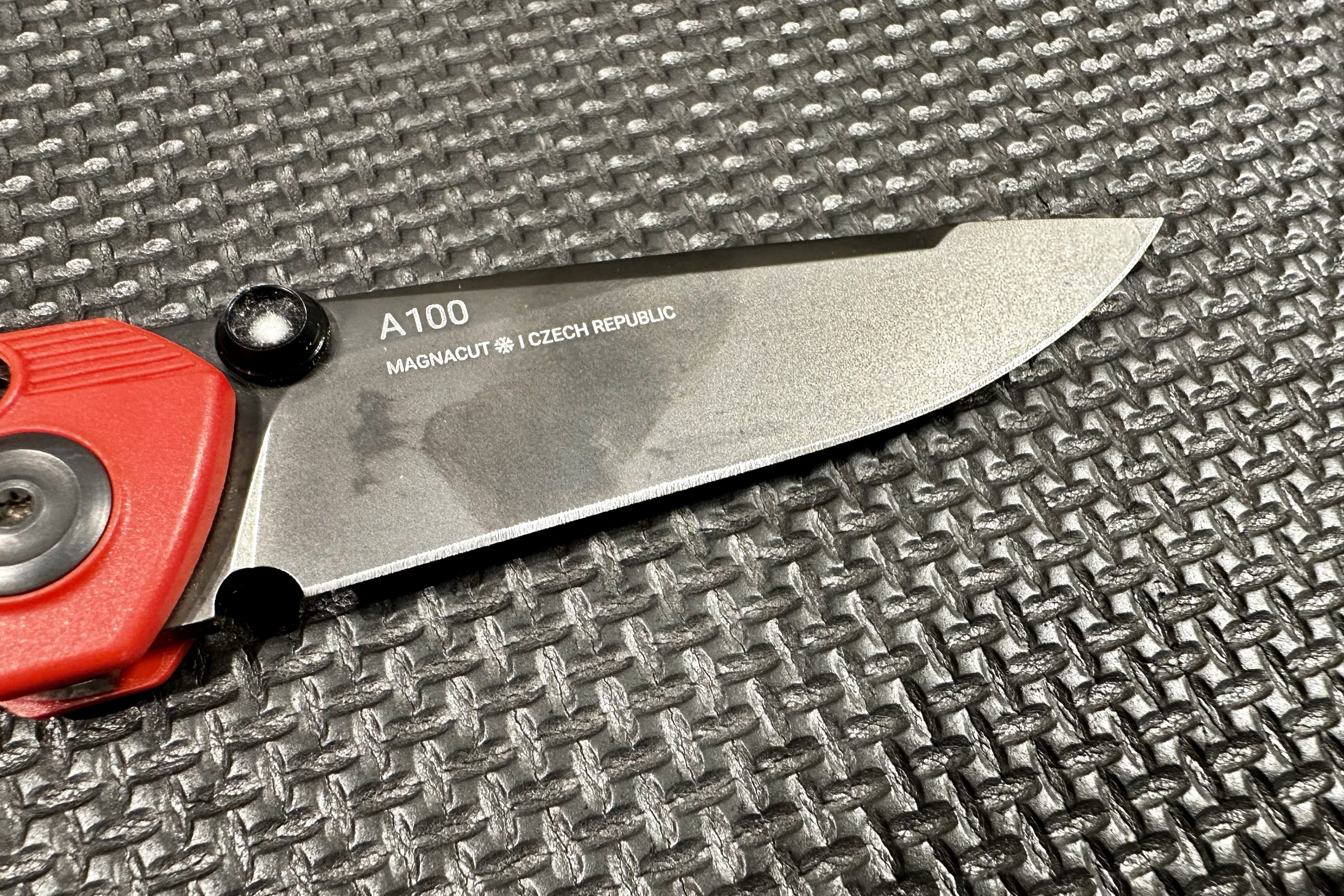 One unique trait is the oversized thumbstud, reversible, which has a pip of luminous material in the center of it. The knife has a reversible wire clip, for tip up carry. The blade is DLC coated, but it’s not like any other coating I’ve seen — it looks tremendously good and has yet to show any wear despite some rather hard use. 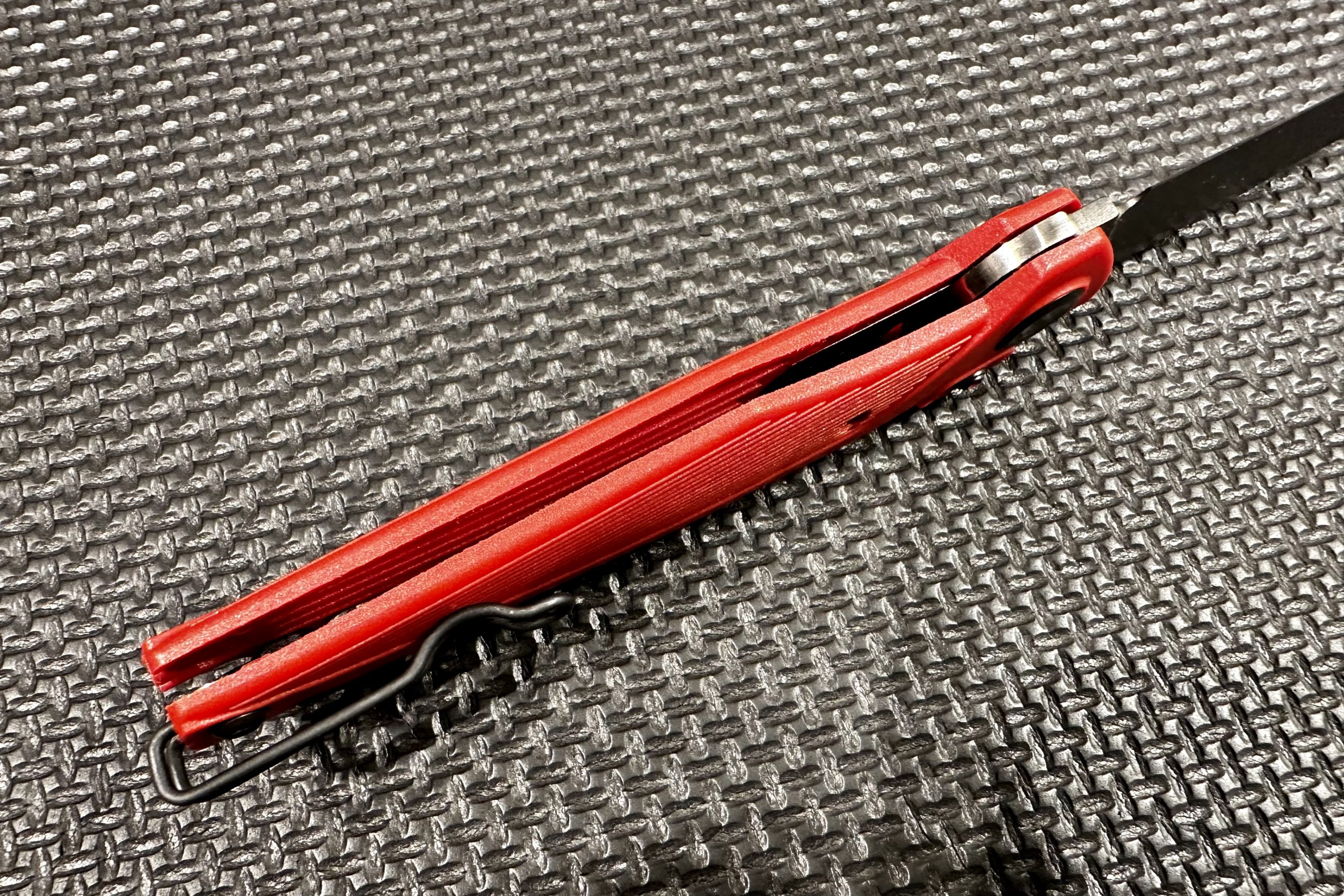 Finishing on the blade is top notch. The action, top notch. The large thumbstud, excellent. But the scales, well, they feel not great. They are the clear weak spot on the knife. 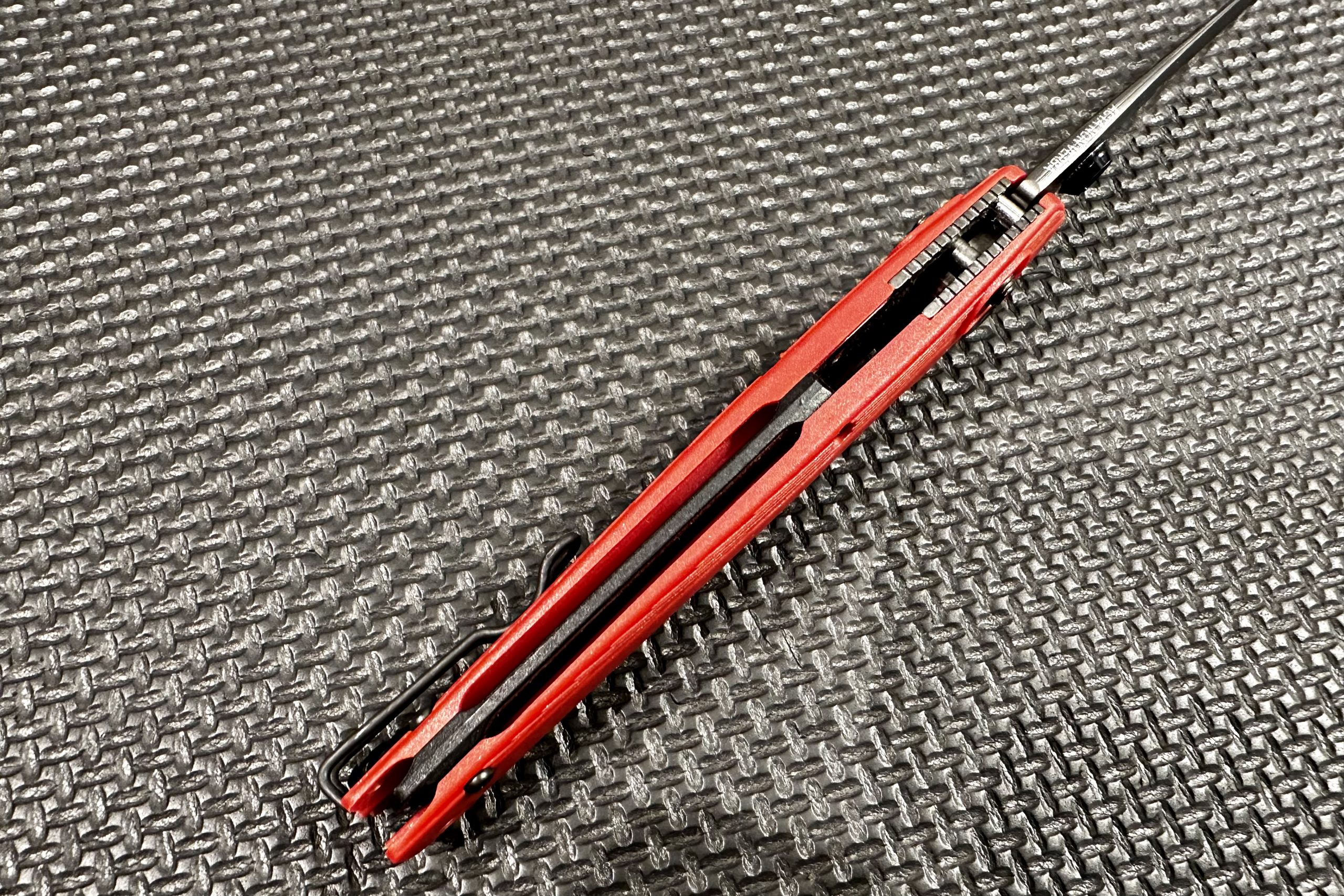 Oh, and one last note: I’ve literally never received a knife as sharp as this one shipped. The edge geometry is amazing on this, and I was absolutely blown away by how sharp it came. In fact, this knife has the bragging rights of being the first knife to draw blood from me in quite some time. That wasn’t ideal.

This knife has been a mixed bag for me. It’s simply too long for me to carry as an EDC out and about. Carrying it on my pocket edge on the weekends has been great though. It is a very stout blade, good slicing, and good control. There’s a lot of edge to work with, and I find the blade overall about 0.5” too long for most box cutting tasks, it feels a little too much. It feels longer than the specs indicate. 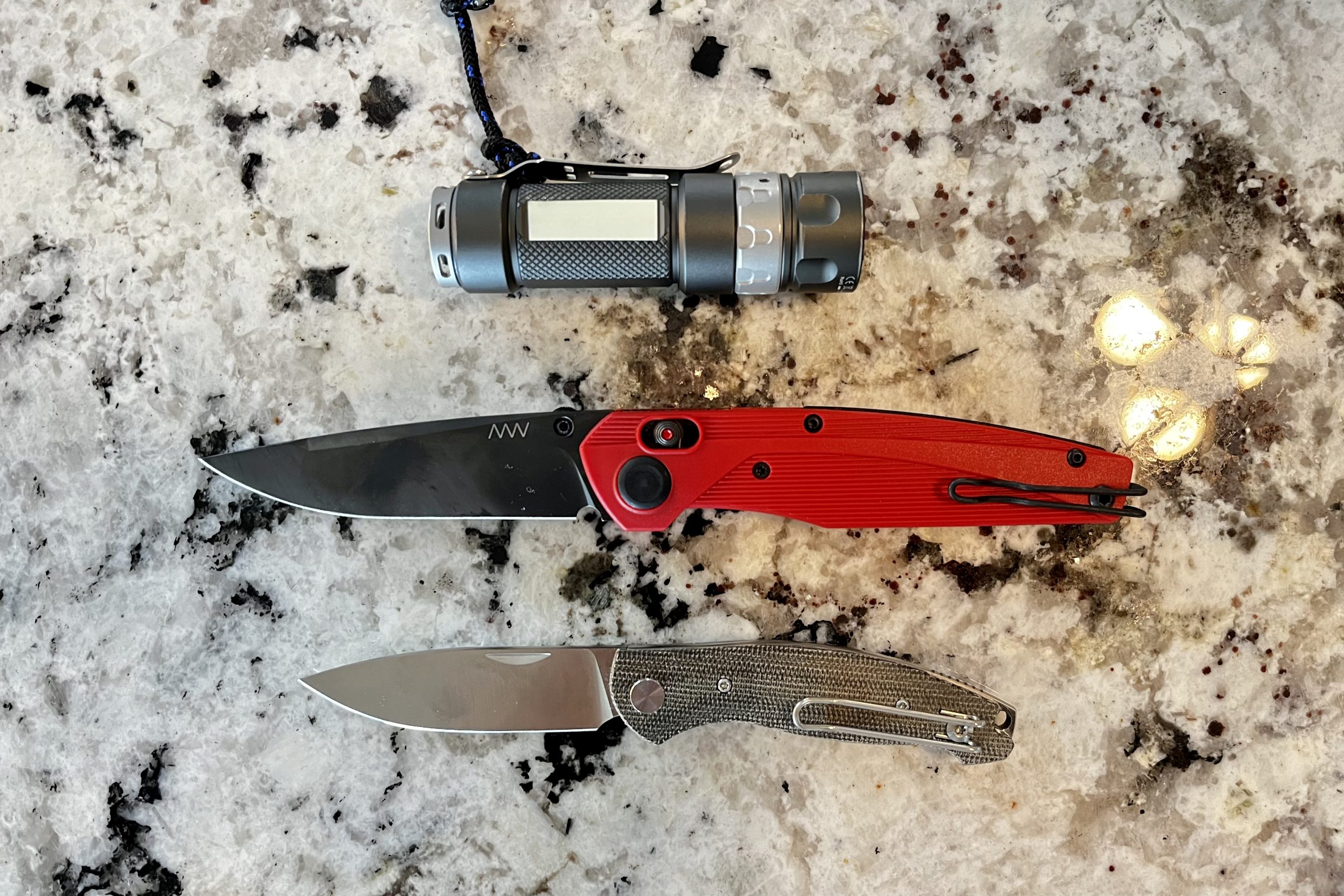 That said, I was going full machete mode with the knife in the yard to cut back a couple of vines, and it was making quick and easy work of the task. And then I nailed the blade edge to a metal tree stake. There’s not even a spot I can see on the edge of this knife where damage occurred, and a quick strop and slice across newsprint revealed no imperfections in the edge. 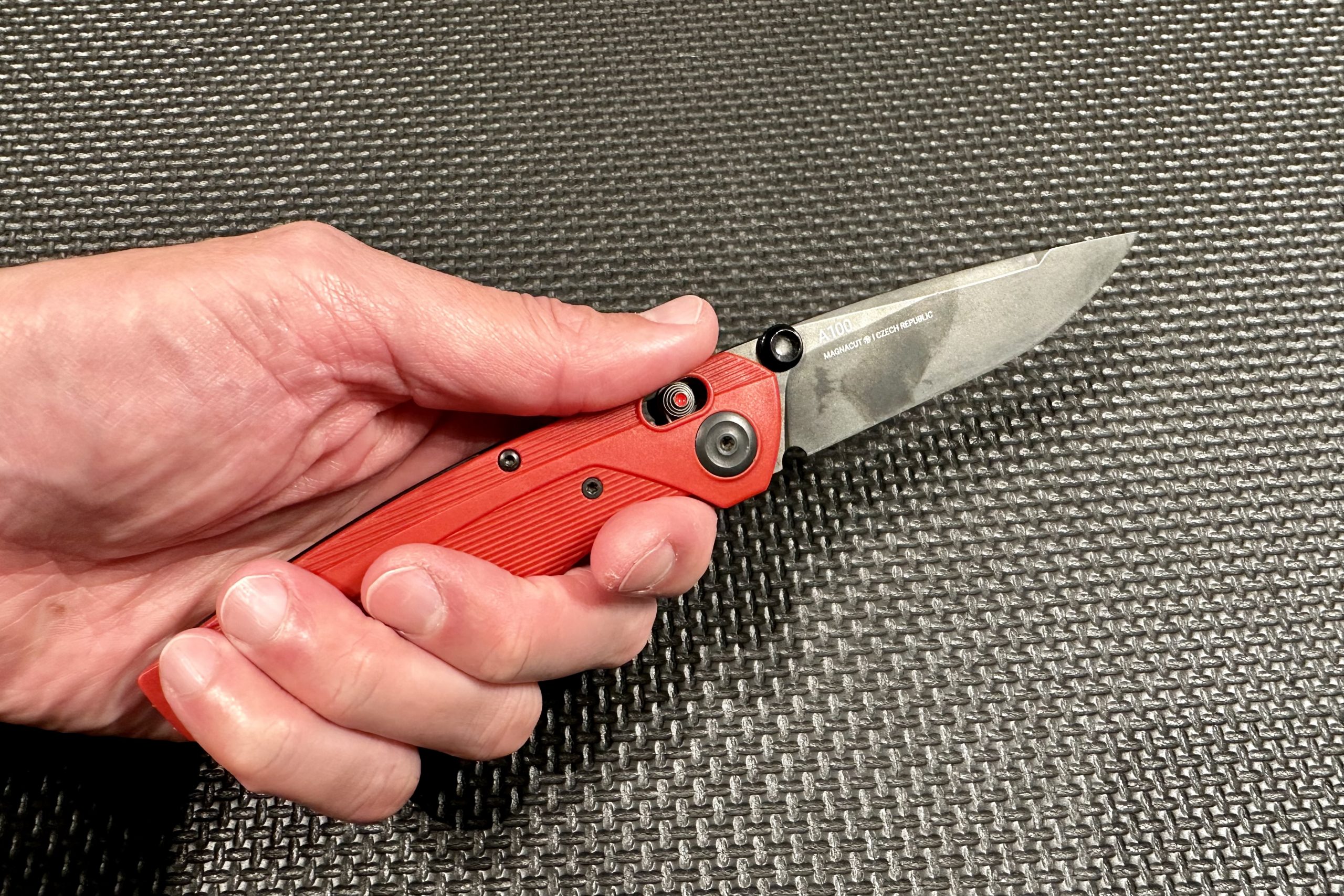 This fully sold me on MagnaCut, try doing that with M390. I think not. If you wonder why I am on the MagnaCut and CruWear hype trains — this is basically why. They are a game changer for being able to make thin and slicy knives, while keeping them tough and easy to live with. 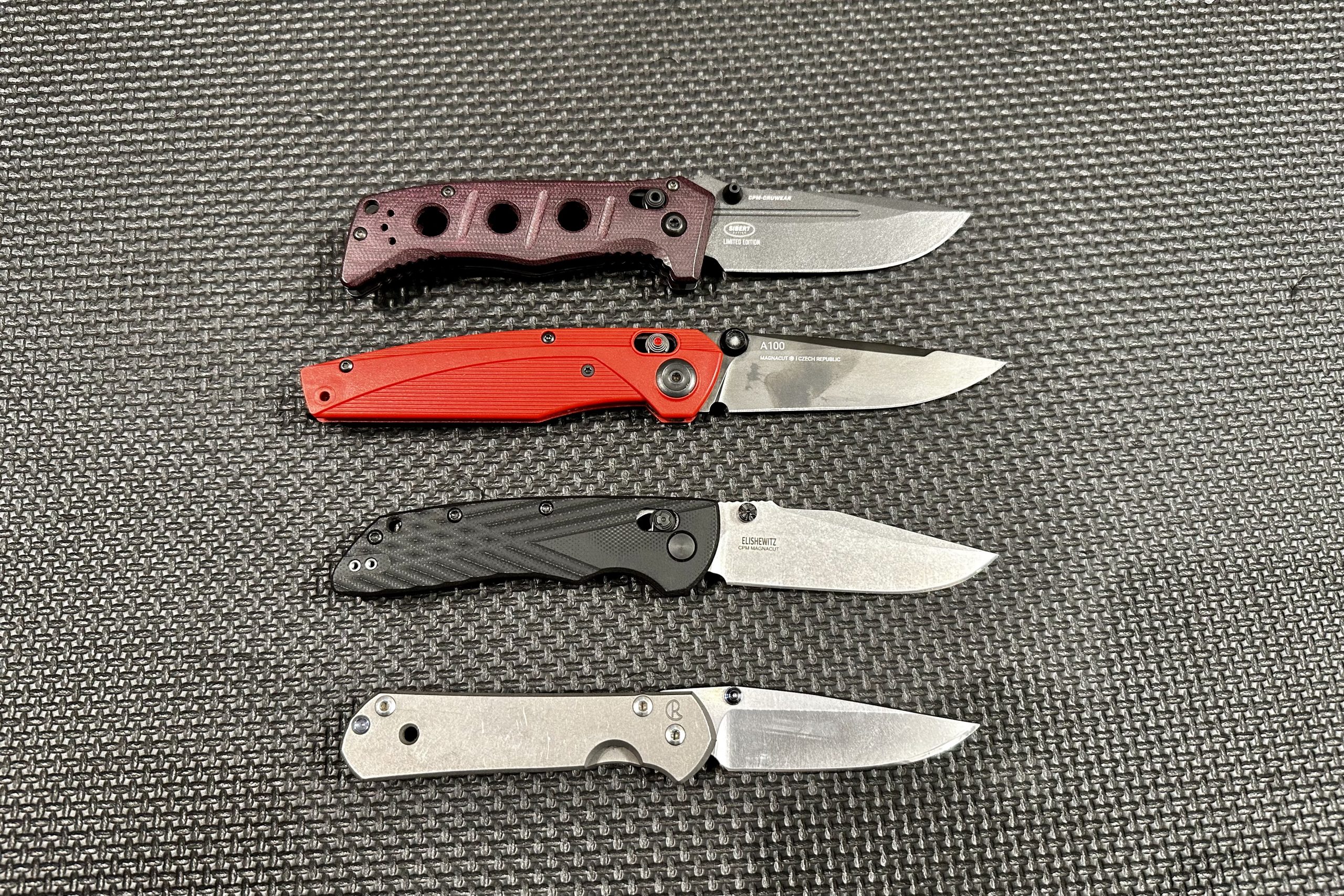 There is a thing though, those scales, when I slice through a tough cut in a box I can feel the scales twisting slightly in my hand at the tail of the handle. It’s not a great feeling. Have they broken? No. Have they pushed the scales in a way where the blade keeps going out of center? Yes.

The scales are a mixed bag for me, they are super light and help to make the knife feel nimble for its size. They are very comfortable in my hand as well, the texturing and shaping is really amazing. It’s a full hand grip with a strong stop to keep your fingers from sliding forward to the cutting edge. If they were made out of G10 or Micarta, they would be aces. But whatever this plastic is on the scales, I am surprised it has not snapped yet after the twisting I have felt from them. 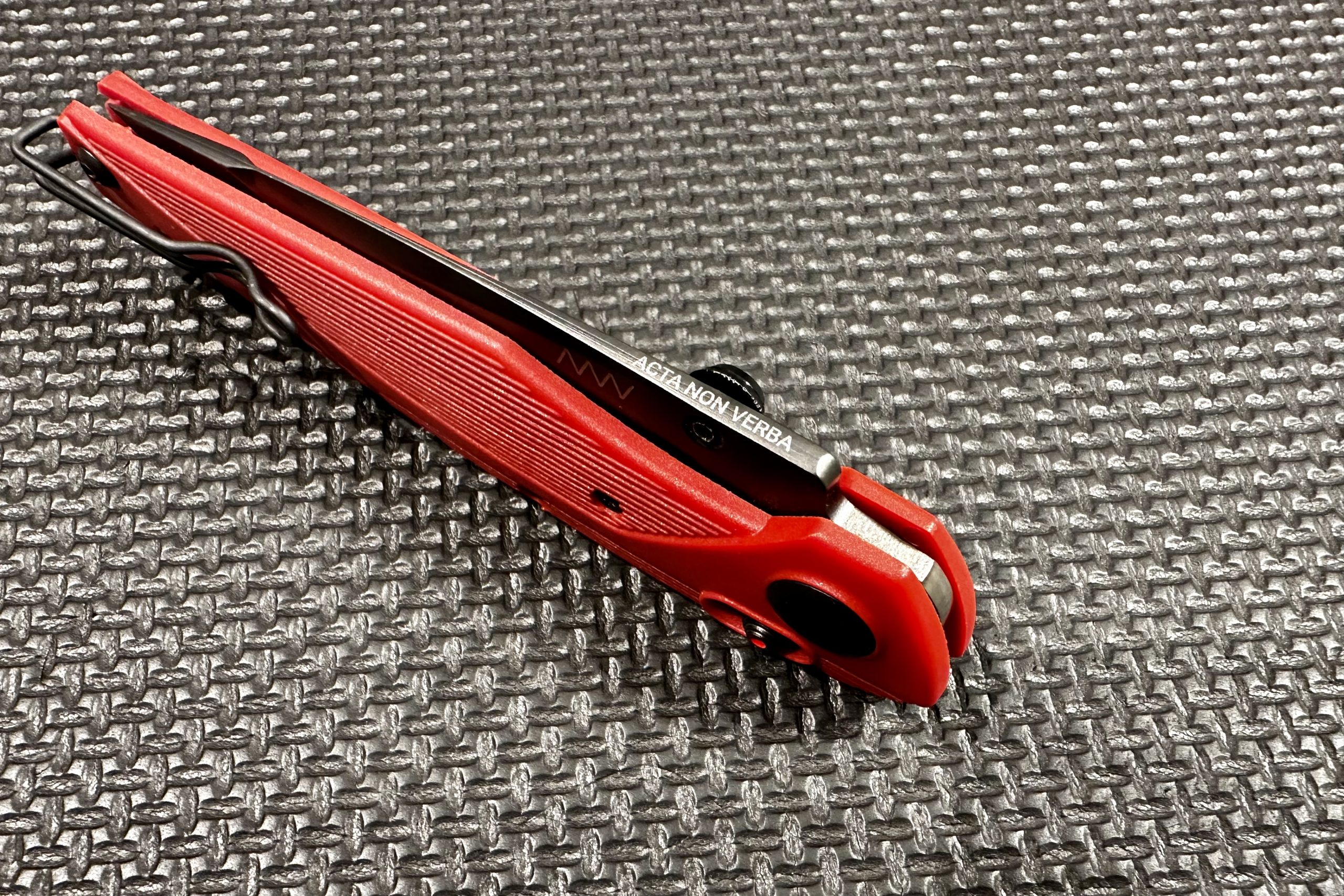 They move, they flex, and they feel weak. They are not weak, clearly, but you can’t get around that sensation that they are indeed the weakest point. And then you get to the reversible wire clip. It’s shit, no sugar coating there. 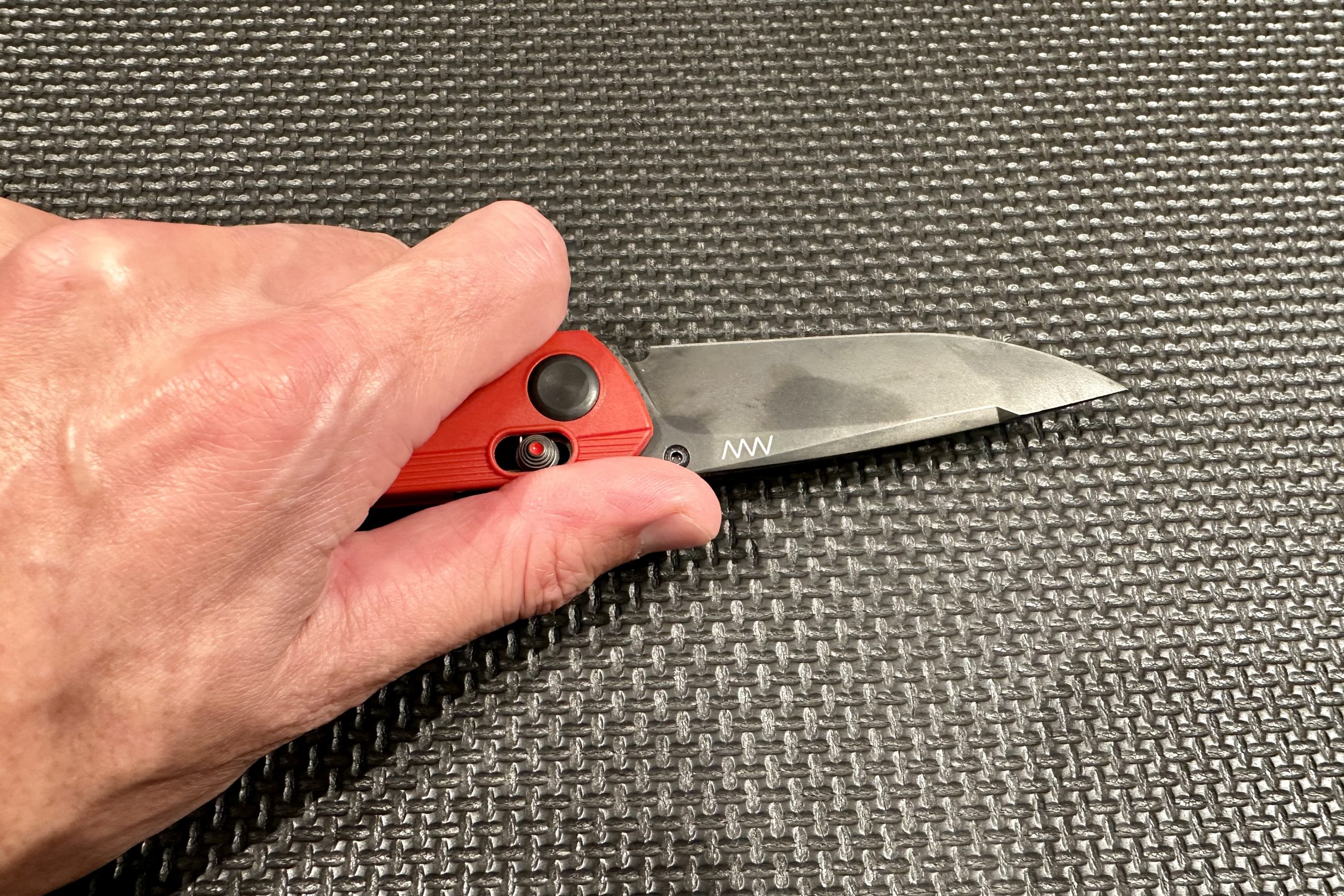 I needed to move the clip and thumbstud for my lefty ways, and in doing so, I found that even though the clip is listed as reversible, perhaps it’s not. It’s never been the same. It’s grippy, hard to slip on to things, and grips too much when trying to get at this knife. It seems like it is twisted and not wanting to be on this side of the knife — like it is in active revolt of my left handed nature. 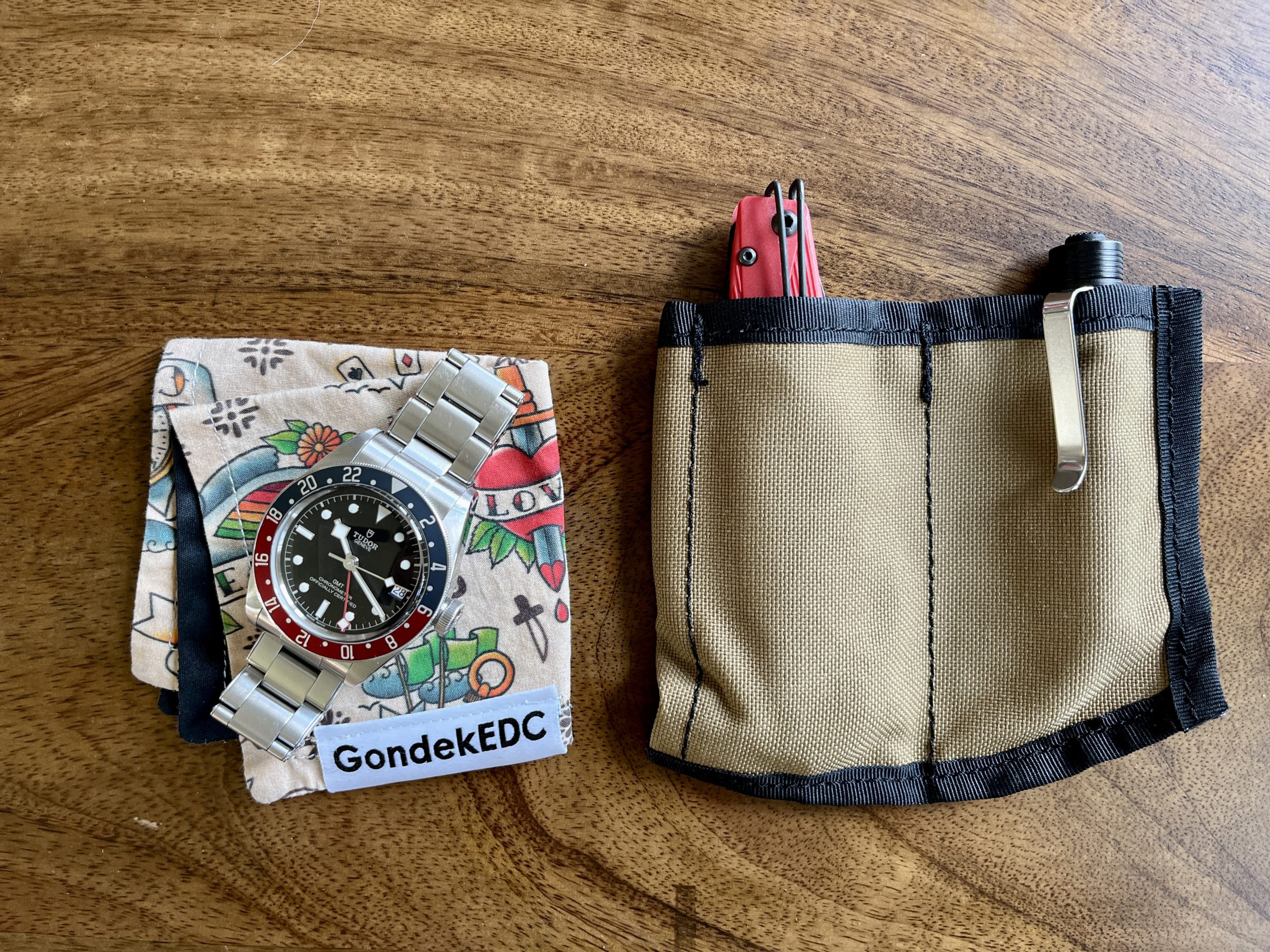 And the shitty icing on top here: it’s a huge pain in the ass to flip to the other side. I don’t know if there is an aftermarket clip, but damn do I hope there is one. Bad clip is bad.

Oh and the ‘lumidot’ inside the thumb stud is a gimmick. Even when hit with a UV flashlight before bed (like you wouldn’t do that either), it’s long since lost glow by the time I get up in the morning. I am not sure the purpose here, other than to make for cool Instagram photos. It sure looks cool.

(Side note, I thought the thumbstud was screwed on from the backside, and stripped that screw head. It’s not screwed on, it’s a screw post, turn it the other way to unscrew. Oops, that sucks. They do sell these by themselves though.) 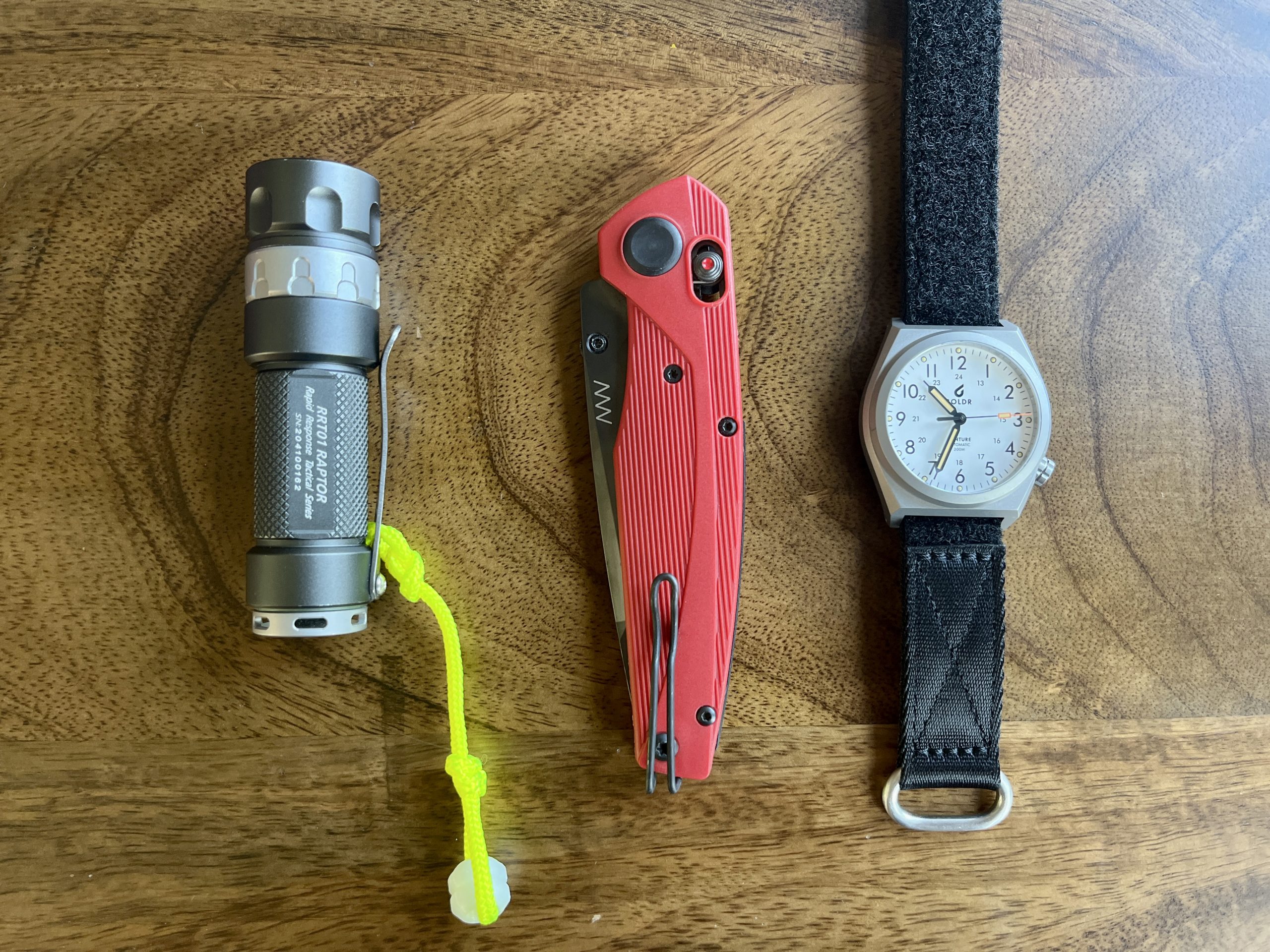 But I do love playing with the knife. The action is very smooth and snappy. The thumb stud is fast and easy to hit — no fatigue on your thumb pad from using it. And the blade deploys with enthusiasm to a strong lockup each time. It drops closed when the lock is released. And the blade geometry is near perfect for this knife.

This knife isn’t a clear decision for me, and I am struggling. It’s not in anyway bad in an outright fashion. The action is amazing, the lock up is strong. I love the oversized thumbstud. When I am using it around the garage, about 95% of the time I really like using it. But when I go to put it in my pocket, or pull it out of my pocket — I don’t like that. When I am needing a lot more pressure on the blade, I don’t like feeling the scales move.

The thing is, the blade on this is amazing. And for that reason alone, I quite like this knife. It’s been the knife I have grabbed every weekend since getting it, and likely the one I will keep grabbing. And MagnaCut, yeah, believe that hype — this knife has proved that to me. Given the scales, I think you are paying quite the premium for this knife…