A really nicely made watch, which is one of those ‘never think about damaging it’ watches — with a few caveats.

I snagged the Seatrek for a bargain basement $140 from Jack Mason, but I am going to be looking at it in the perspective of the MSRP listed — but know that Jack Mason does sales often during the year (and they seem to be replacing this model, however it’s still worth a quick look).

The Seatrek is a quartz diver, with a lot of subtle flair to it, and it looked like a steal at the discounted price (spoiler: it was/is). 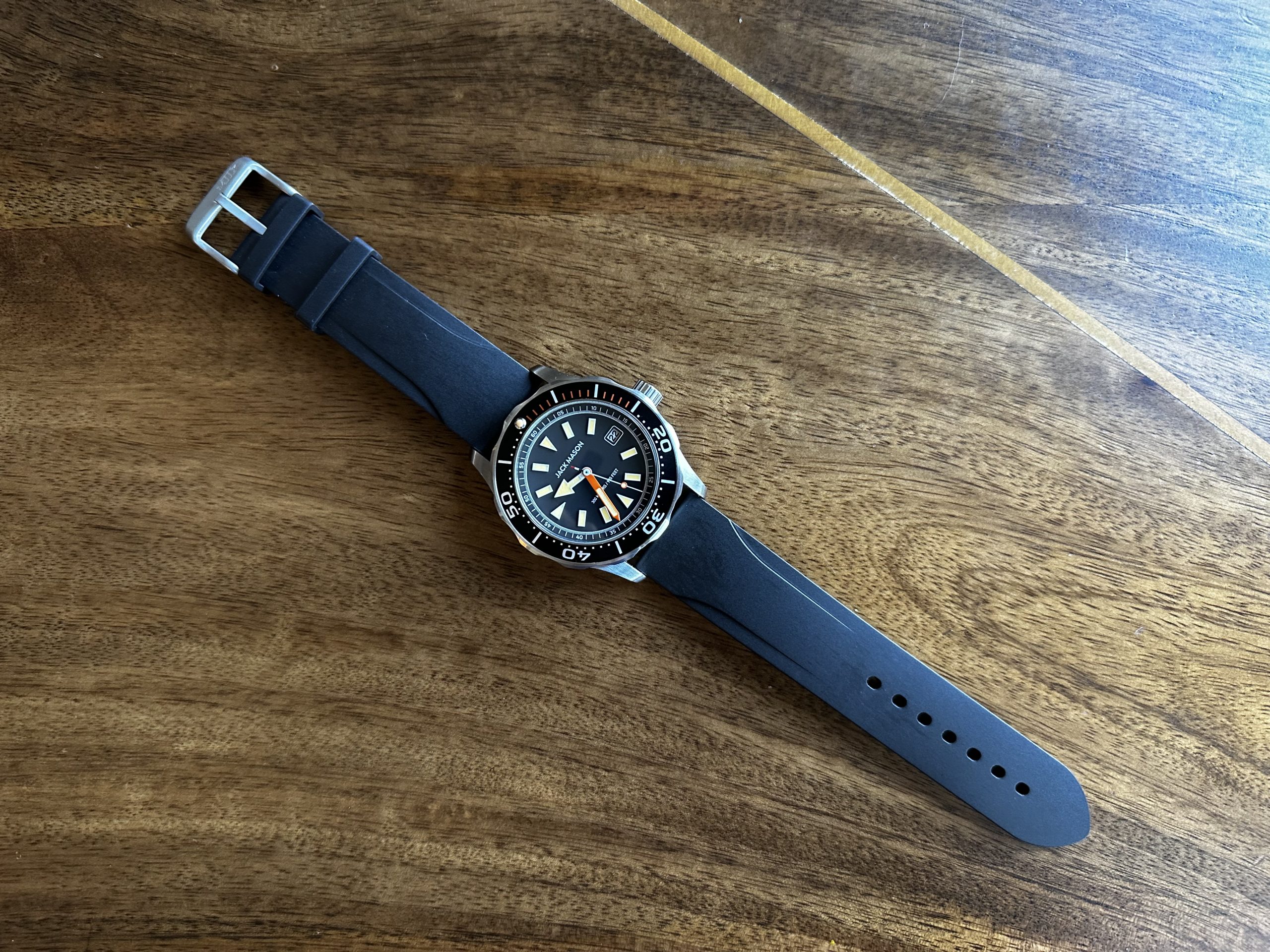 The first thing that caught my eye here (after the design) was the 300m water resistance — that’s not a common rating on a watch in the sub-$500 price point. It’s not unheard of, just not common. 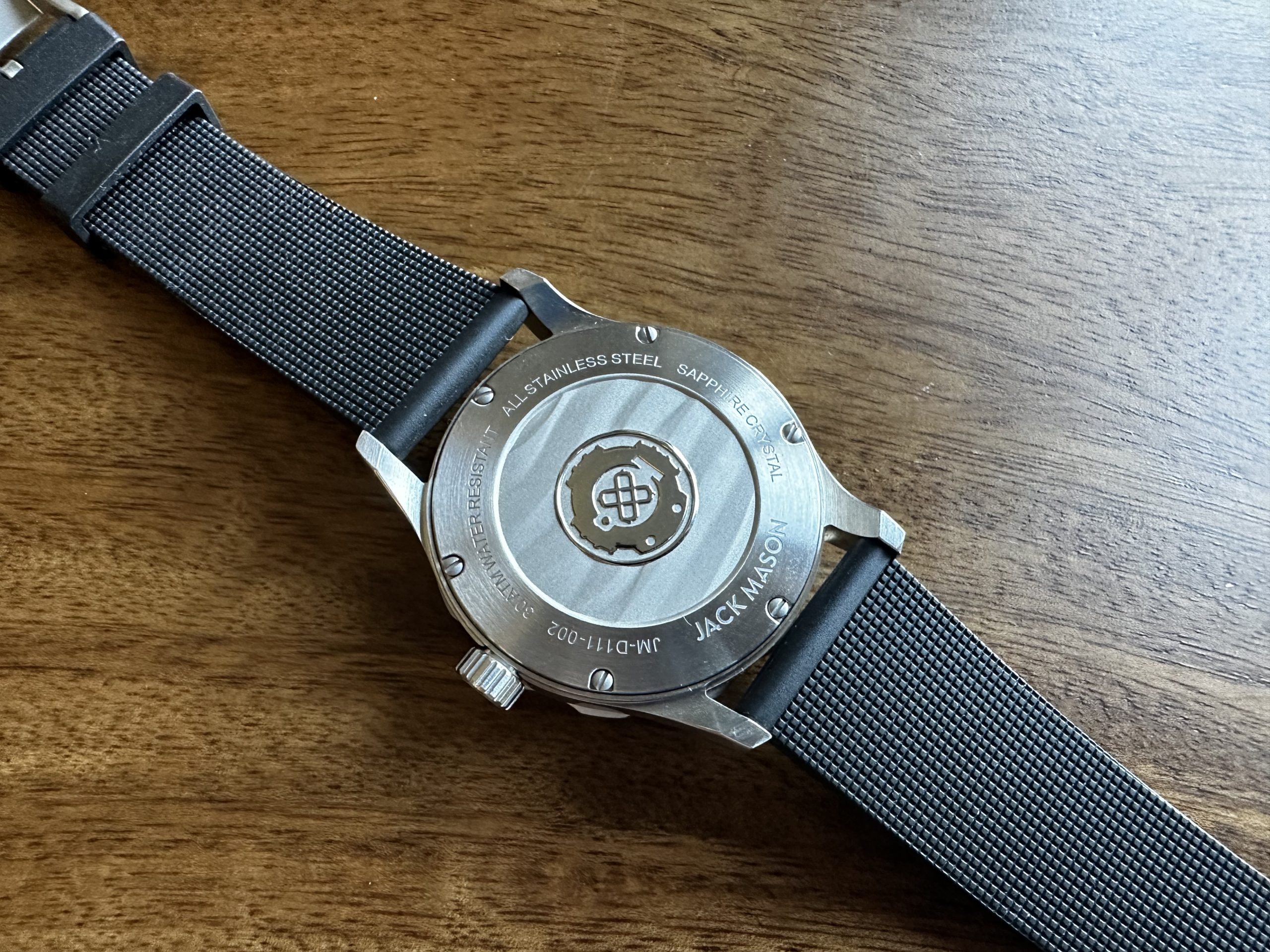 The movement is a Miyota 2315 which has a date complication and can be thanked for being nearly silent in this Jack Mason case. Beyond that point, it’s a bit of an underwhelming movement. 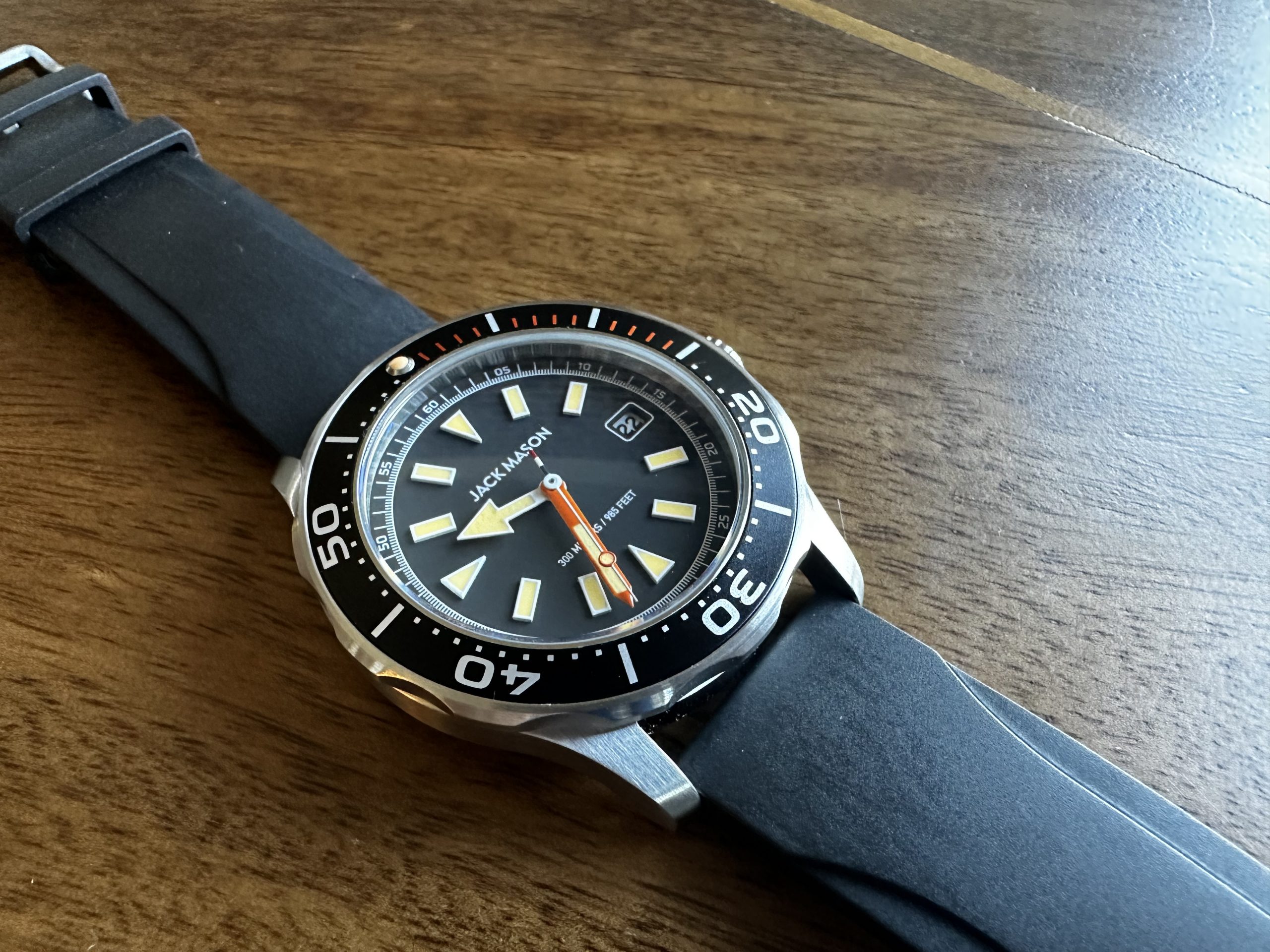 The case is a 316L stainless steel, with a screw down crown and sapphire crystal — it’s well finished too. It offers really nice lume on the indices, hands, and marker on the bezel. The lume passes my testing just barely, so it’s among the better applications out there. 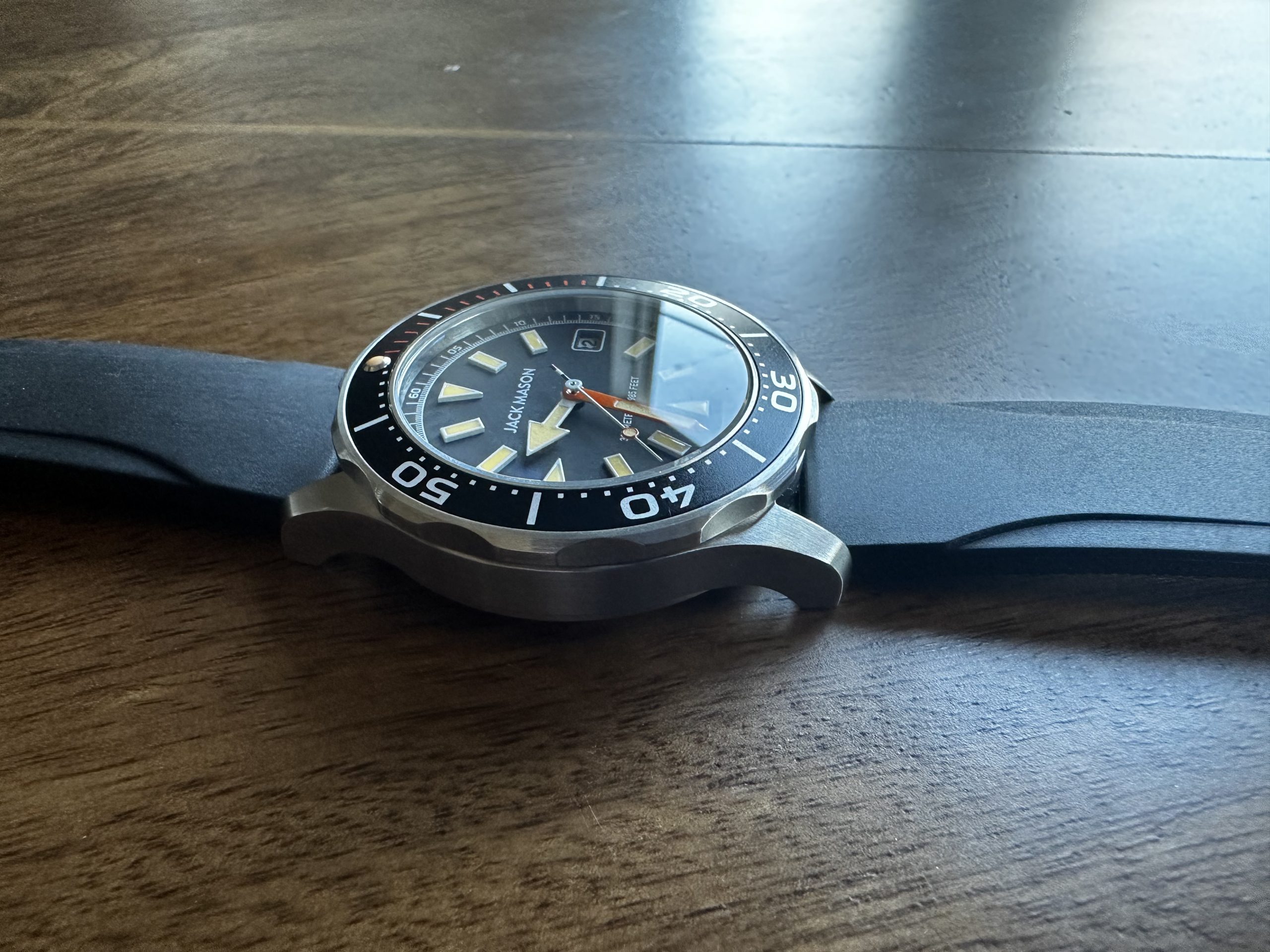 The case is a beast at 42mm and 51mm lug to lug with a 22m lug width. What keeps it wearable is the nicely downturned lugs, and the 12.2mm height of the case. Even on my wrists (which are 6.75”) it sits well enough not to be a bother with a sleeve dropping over it.

All and all: this is the type of setup you want if you never really want to have to think about your watch. It will essentially always be ticking away, never be loud, have solid lume, and more water resistance than your body has. 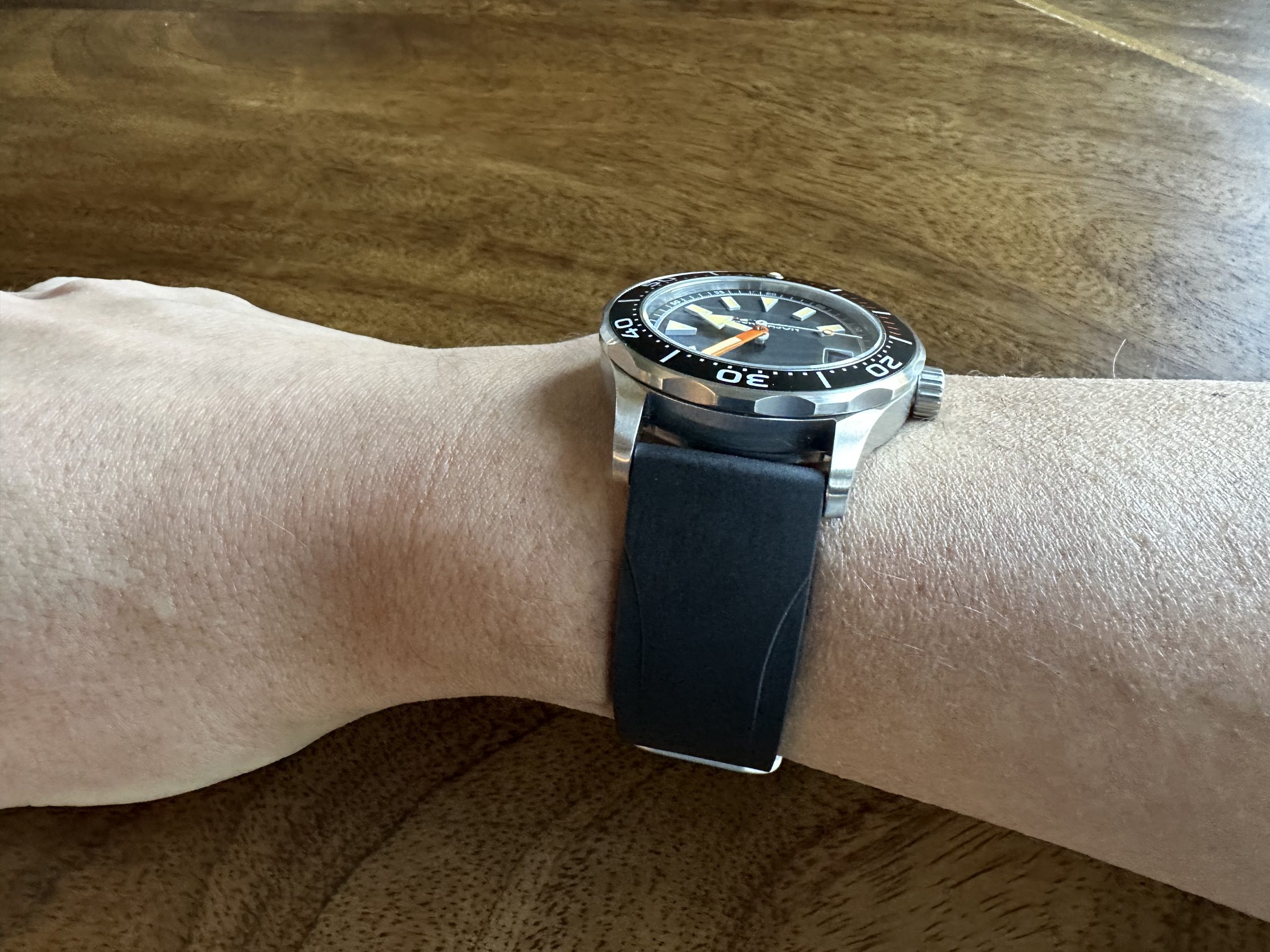 You’ll notice that not many images here have the Jack Mason orange strap on the watch — that’s simply an aesthetic choice by me. The stock strap is actually a really nice strap and super comfortable, but it’s quite bright and bulky. I wanted to trim down the watch, but in doing so I immediately hit the biggest issue with this watch: the lugs. There’s some sharp corners on the base of the lugs, corners you don’t feel on the stock strap because it is thick enough. On thinner straps it is annoying on my wrist. So a thicker/proper strap is needed for this watch — that’s an odd miss for how well the rest of the watch is finished. 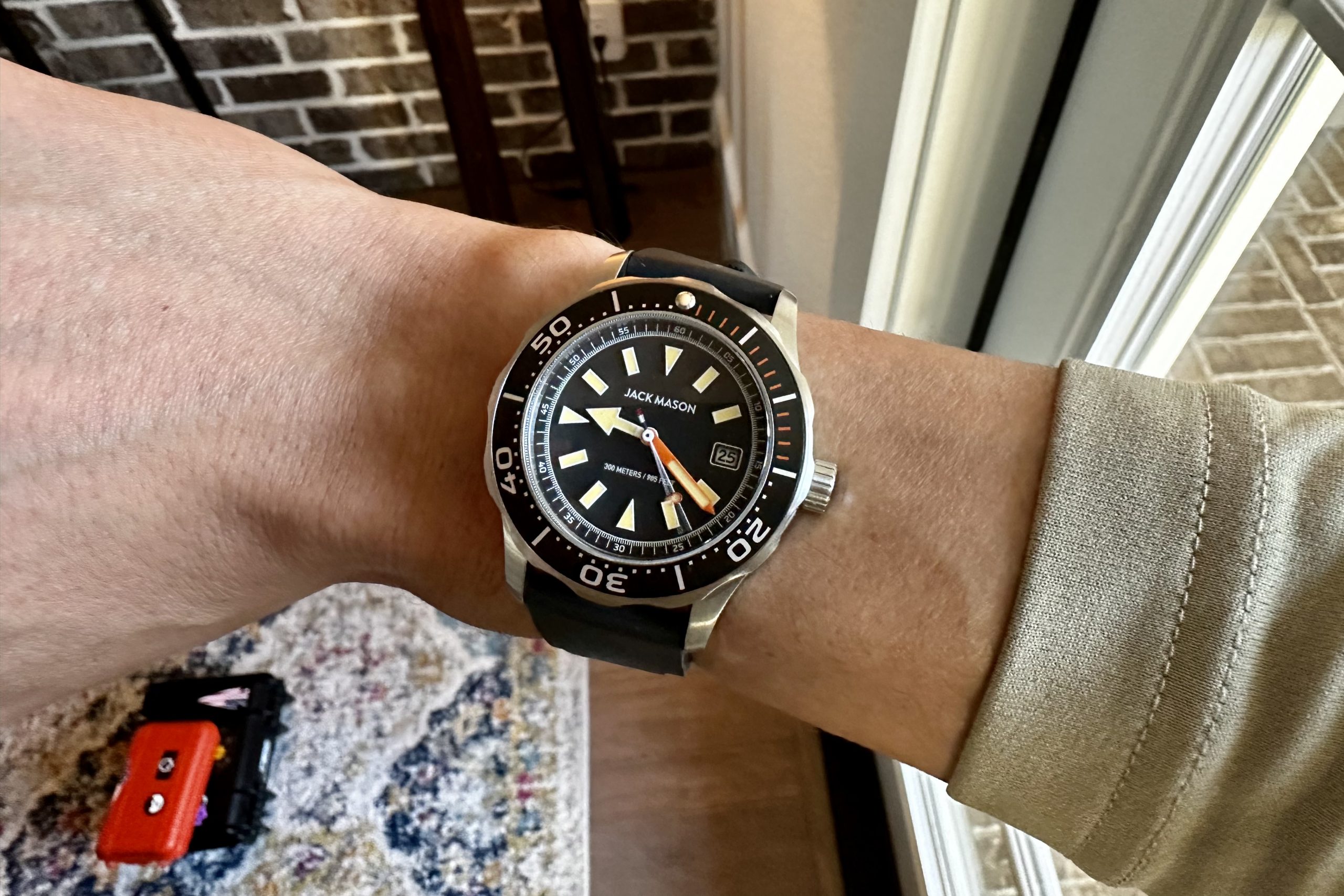 Visually, the design is really nice, and oddly the actual time telling face is rather small compared to the bezel and everything generally around it. It’s not something you notice day to day, but occasionally it gets a ‘huh’ from me. I don’t get that. 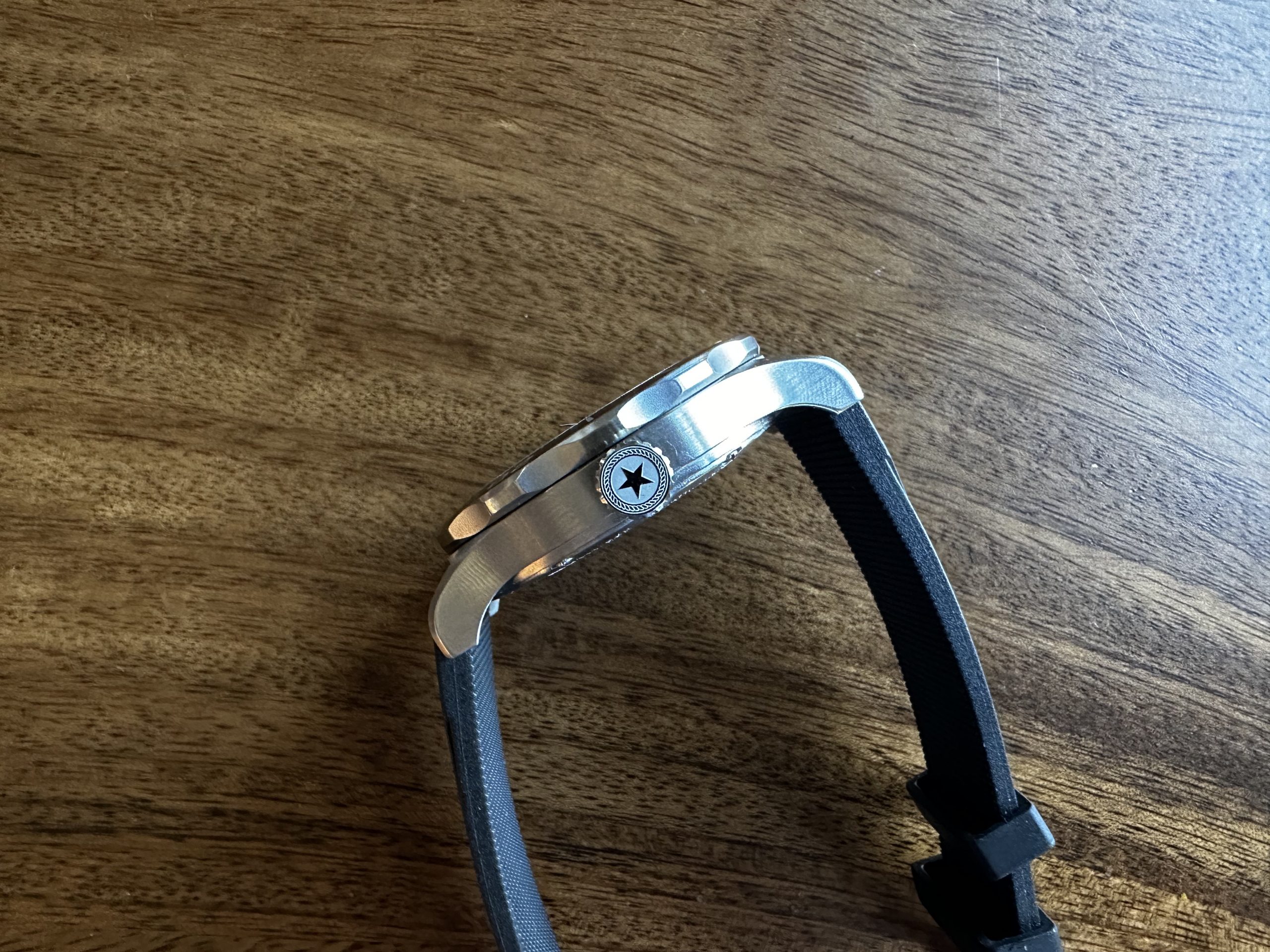 The entire aesthetic of this watch is a little funky, and very playful, for how nicely put together it is. I mark this down in the plus column, as it gives this watch a lot of character and keeps it from being ‘yet another diver’. 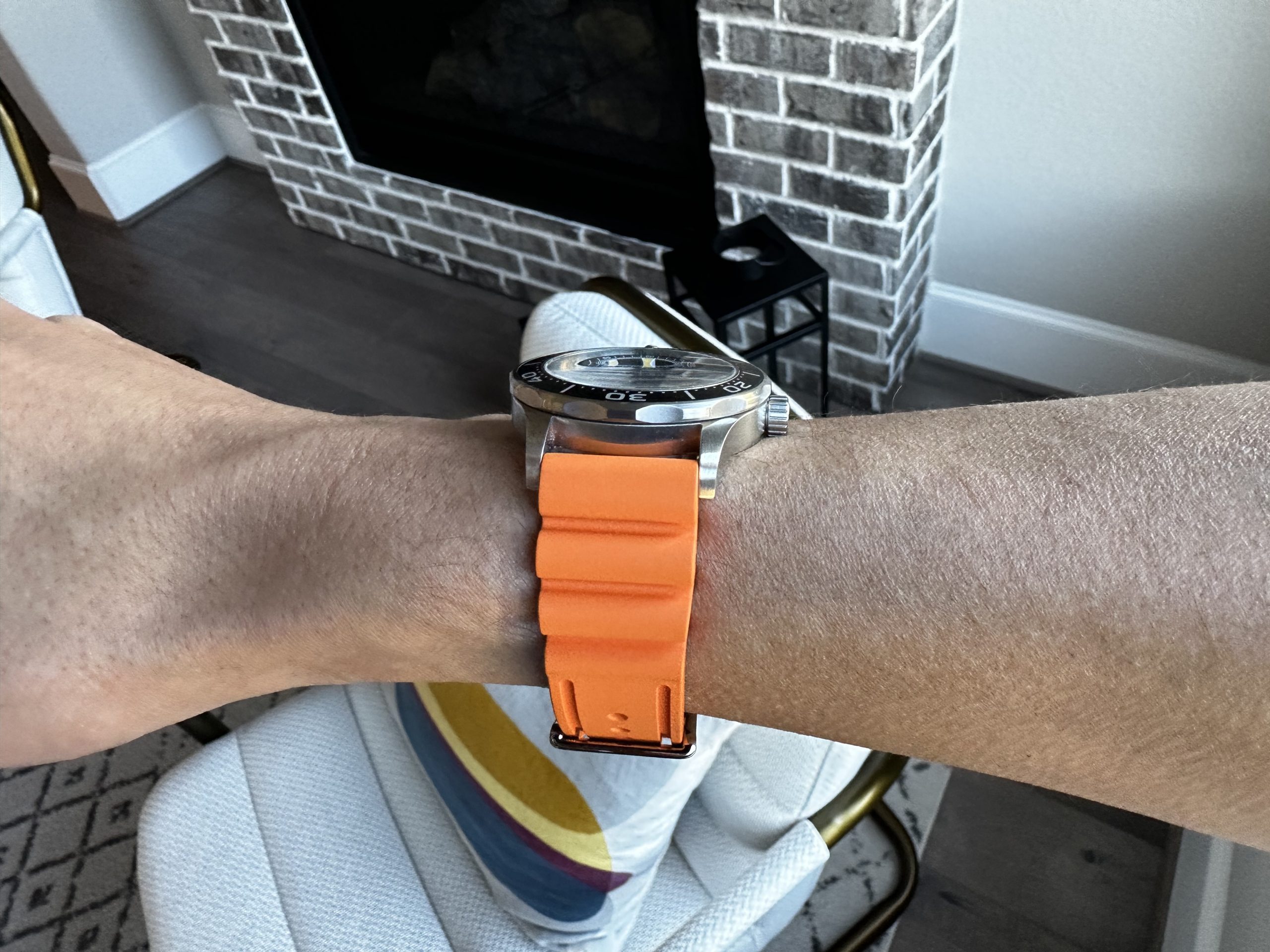 It feels like a casual watch to me, and feels like it is begging to be on a NATO or something of that nature. It’s not a small watch, not a delicate watch, and it’s best setup on your wrist to make a larger statement. That’s just not my thing with watches — I like them to catch your eye, but not because they are a beast of a thing on my wrist. 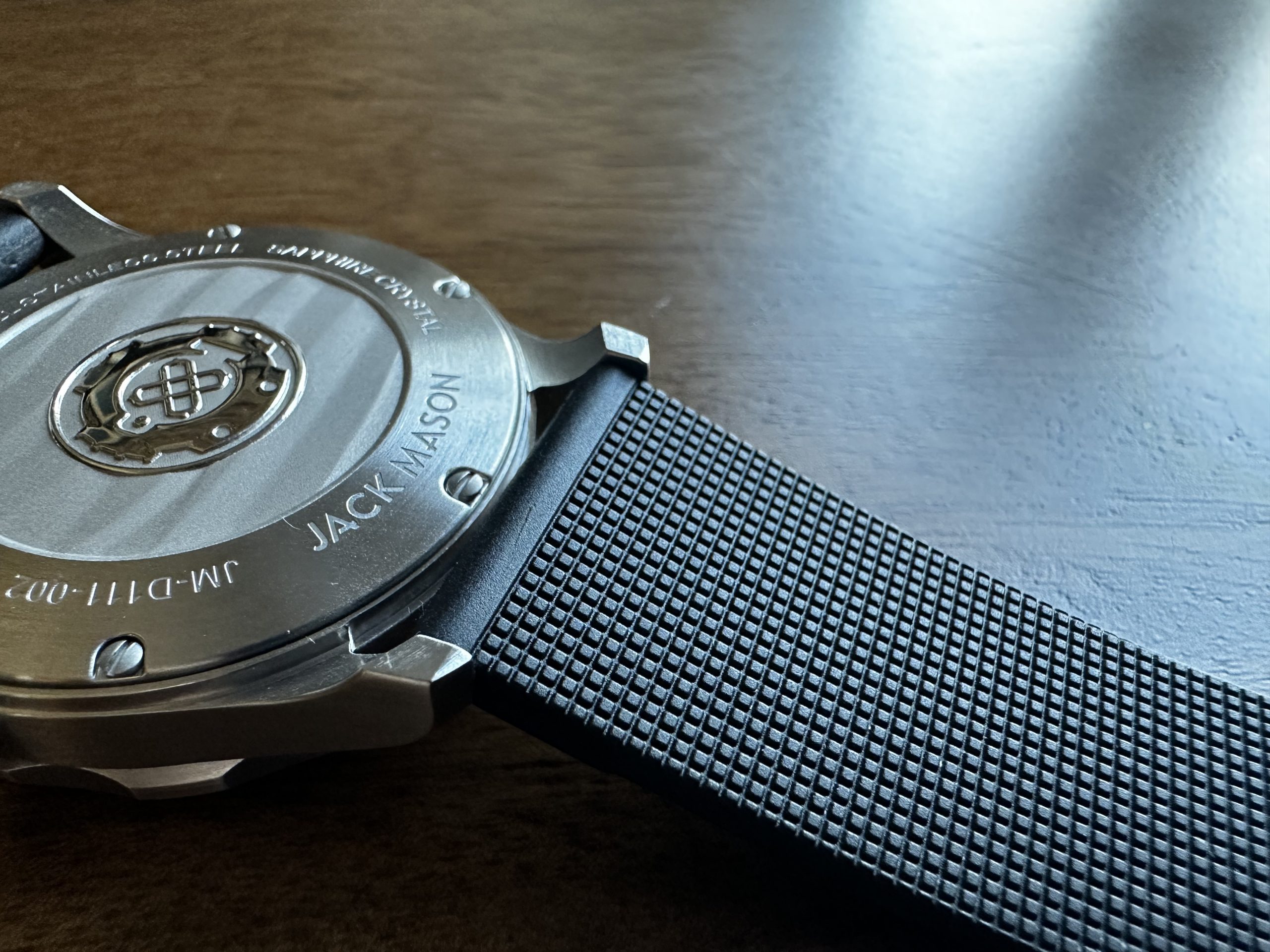 When writing this up, I went to check the original, non-discount, pricing, and the page was gone. In the Wayback machine I found it listed in October 2021 for $219, and in May 2022 for $399. My memory tells me it was listed as marked down to $140 something from $399. Not sure what is going on there, but I thought it worth noting because it makes commenting on the price difficult. 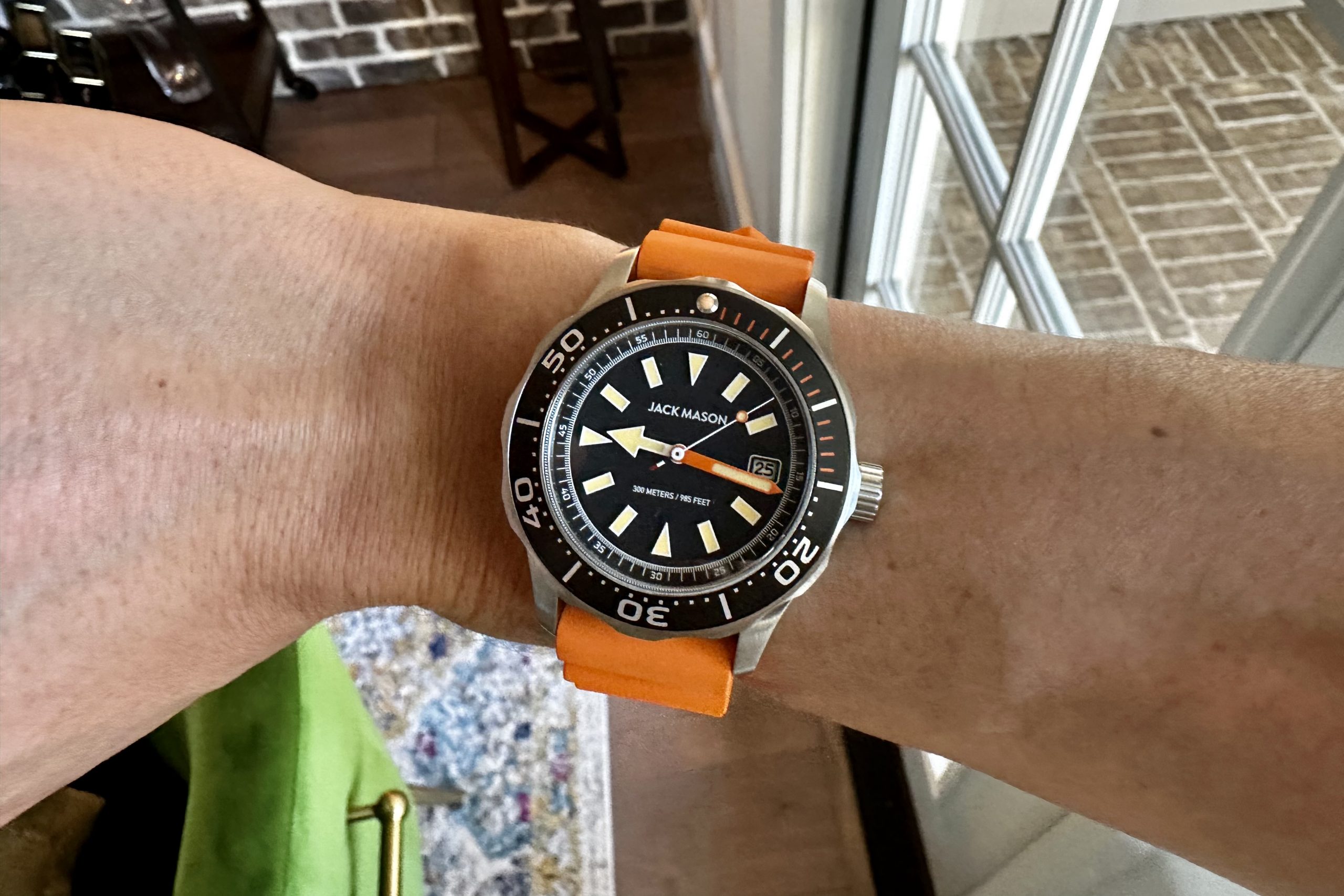 Jack Mason Brand is relaunching this watch, so I’ll be interested to see what they change and update. Hopefully they keep the playful nature, and upgrade the movement and smooth out the lugs. As it is, solid deal at about $200 or less for this setup as I got it.

I’m a fan of this watch, but not a fan of divers, so I’ll move on from this one.

Keep an eye here for what they launch next.