When you take a picture of you wearing a GR2 and then you test the two sizes and you have more to say on the matter. Get the 34L.

I’ve owned two 40L GR2s, and still own a 34L GR2 because the thing is these are huge backpacks, really good backpacks, but they are slightly cumbersome. Where the smaller more refined GR1 is a runaway hit with me, the larger GR2s are fantastically well designed, but when fully loaded they look like this on your back: 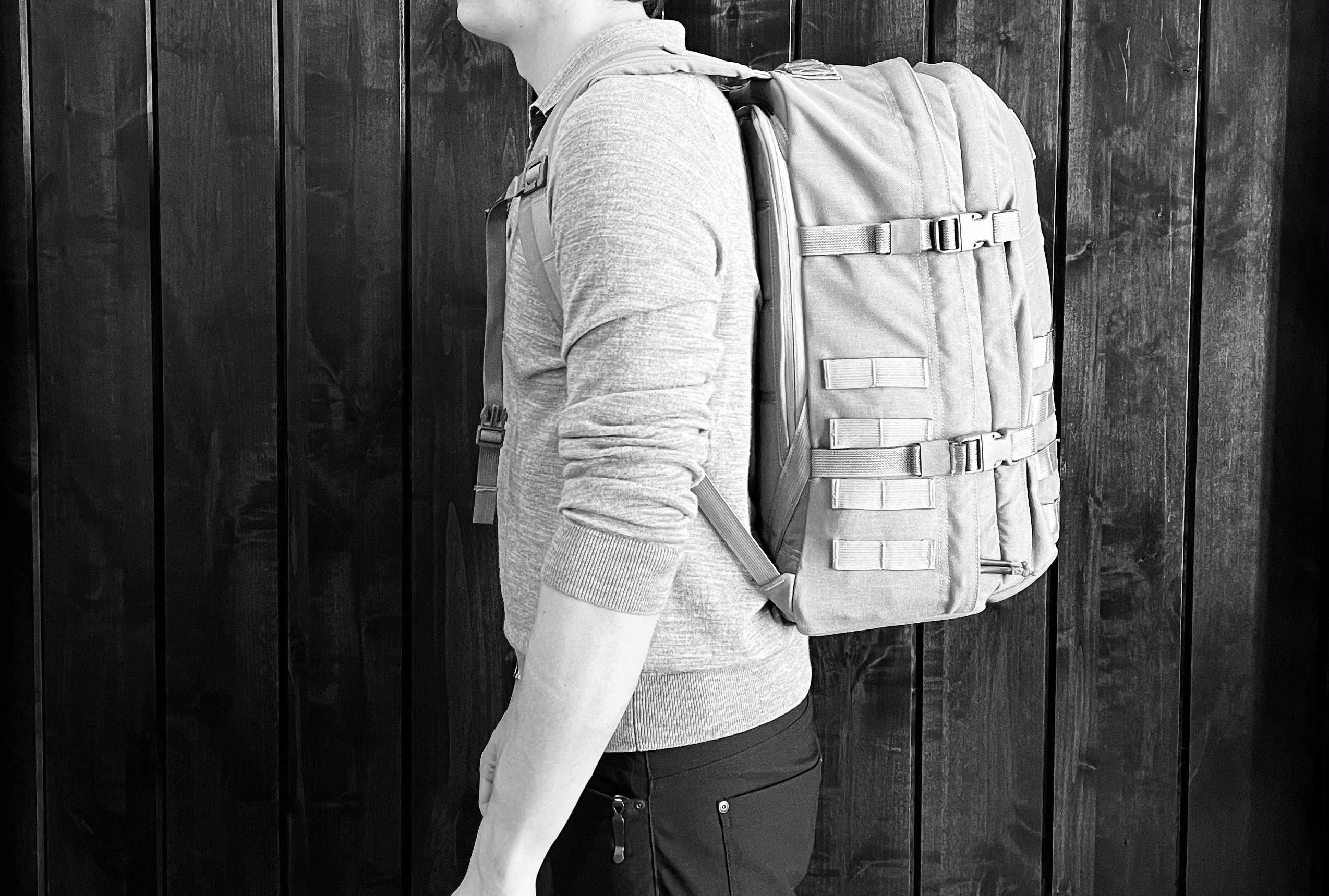 Yes, that’s fully stuffed, but it has added compression straps. It’s less obscene from straight on: 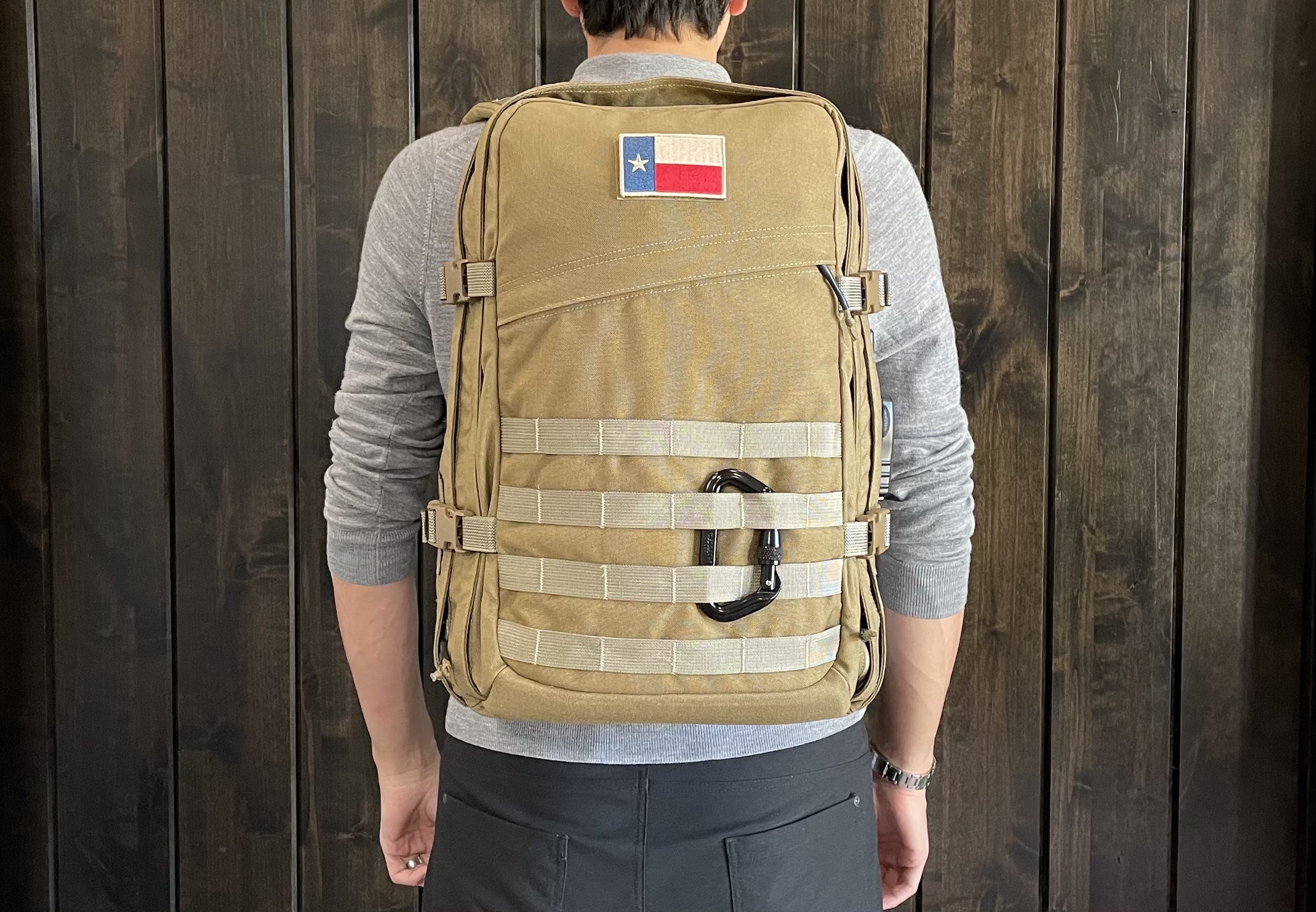 Oh, but that’s the 34L GR2, not even the larger 40L. As I was going through my last round of bag purges, the 40L GR2 parted ways with me, for the second time. Because while I fell in love with the 40L GR2 when I was first learning how to one bag, and then stayed in love when wrangling gear for very young kids — the bag has since become nothing more than a Bug Out Bag for me. Which is rather expensive to sit there when I really never use it for other things. 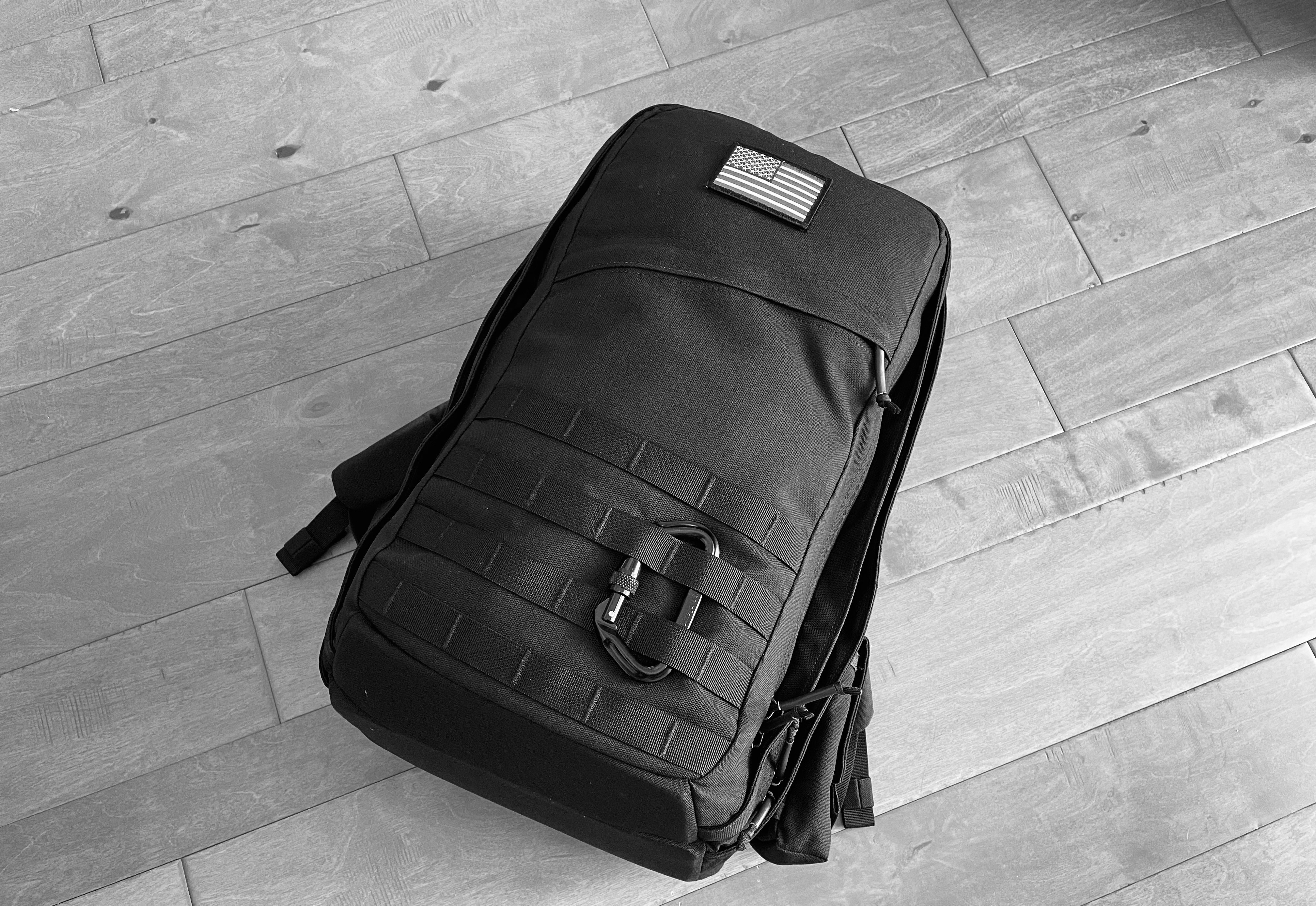 And the truth is, the size difference between the 34L and the 40L is really odd, which is why I wanted to revisit the GR2 in this post — because I am pretty certain the 40L is one you should not buy unless you have a very specific need for it. The 34L is better in every way, but still an odd bag, while really not giving up that much space.

Alright, so the first thing you need to know is that the overall size difference between the two bags simply comes down to 1.5” height difference. Which is really slight. Here’s the specific dimensions from GORUCK:

Since these are simple rectangle bags, calculating that volume difference is pretty easy: 2.76L. In other words the GR2 34L is roughly 2.75L different than the 40L GR2, despite the larger volum designations. There’s a lot of explanations as to why/how this is off — GORUCK is generally really close with their liter counts. Because the truth is the bags are not perfectly rectangular.

That said, I don’t think there is a practically a full 6L difference between the bags. Because what this really means is that my fully stuffed 40L GR2 filled with emergency gear, was transferred directly into the 34L GR2 — same gear, different bag, both fit. The fit was only slightly tight in the smaller GR2 and yes the 40L always felt slightly empty at the top bit of it.

In other words: I can fit everything I would in a 40L in a 34L because the only practical difference is the 1.5” change in height.

Which is why I said above, that unless you have a specific need, the 34L is a better option. And a specific need would be that you want the main compartment to hit that larger height fit specific gear.

The thing about the GR2 is that it is big. Not just dimensionally large (which there are larger bags than this, the dimensions are actually fantastic on this bag) but that the bag is visually very large. This is not something people will look at and ever think it is small.

Likewise the bag feels big on your body. It sticks out too far, and covers your entire back. But no matter how loaded it is — in typical GORUCK fashion — the bag carries heavy loads really well. It’s comfortable to wear on your shoulders and back. It doesn’t strain you, it works with you.

The issue is that it looks bigger than it is. So for as massive as it looks, it doesn’t hold as much as it looks like it should — or even perhaps as much as the capacity measurements indicate that it should. This is for good reason, a lot of the capacity is in the hard to utilize front compartment. Where there is a admin pocket and a series of inner pockets. This area also has volume outside of the pockets which is in a wedge shape, where there is far more depth at the bottom than the top. This makes it a little hard to pack to its fullest potential.

Because of this the bag packs smaller. But not all hope is lost, as I actually can fit a lot in this, you just have to be fitting compressible gear into the bag, as the design lends itself nicely to compressing more than you think would fit into the bag. The end result being a bag that packs close enough to it’s stated capacity for you not to fret over it. (Rarely do you hear people complain about these bags being too small.) The added front pocket really should be used for gear, while the main compartment used for larger bulky items like clothing and shoes.

In use the difference between the 40L and 34L is stark visually and on your back. Even on my 6’-3” frame, the 40L feels too big. It feels silly to carry. It’s tall, dense, and bulky. The 34L is big, but it fits well on my back and doesn’t make me feel like I should be hiking with the bag instead. I don’t see how shorter people like the 40L at all, but perhaps people have more tolerance for bags extending past the belt line than I do.

Bottom line: get the 34L GR2, not the 40L GR2 if the GR2 is a bag you want. It’s a fantastic bag, but can be tricky. With the 34L you don’t lose enough capacity to worry about it (meaning if you can’t fit it in the 34L then the 40L likely won’t be the solution for you). The only reason to get the 40L is if you have something long you pack which will only fit in that bag.

But, and this is my big caveat: I am not as enamored with the dimensions and carry of this bag as I once was. It is a fantastic bag that will last you many years of very hard use. But it looks and feels huge. There’s a time and a place for it, and there’s nothing that packs clothing for a long period of travel as well as this bag — at least nothing I have tested yet. But it comes at a cost, and the cost is that first picture, here it is again:

There you have it.