This is one of the coolest looking bags I own, but it’s not a very good backpack.

I’ve only used one Triple Aught Design bag before, mostly because there don’t exist a ton of reviews, and they are hard to catch in stock, plus they are expensive. Take the bag I am reviewing today, the Triple Aught Design Fast Pack Litespeed, even for this bag I snagged it used from someone on the Discord wanting to offload it — it is in stock by some miracle, but still it’s not really a bag you see a lot written about, and yet everyone seems to want/love/recommend it. 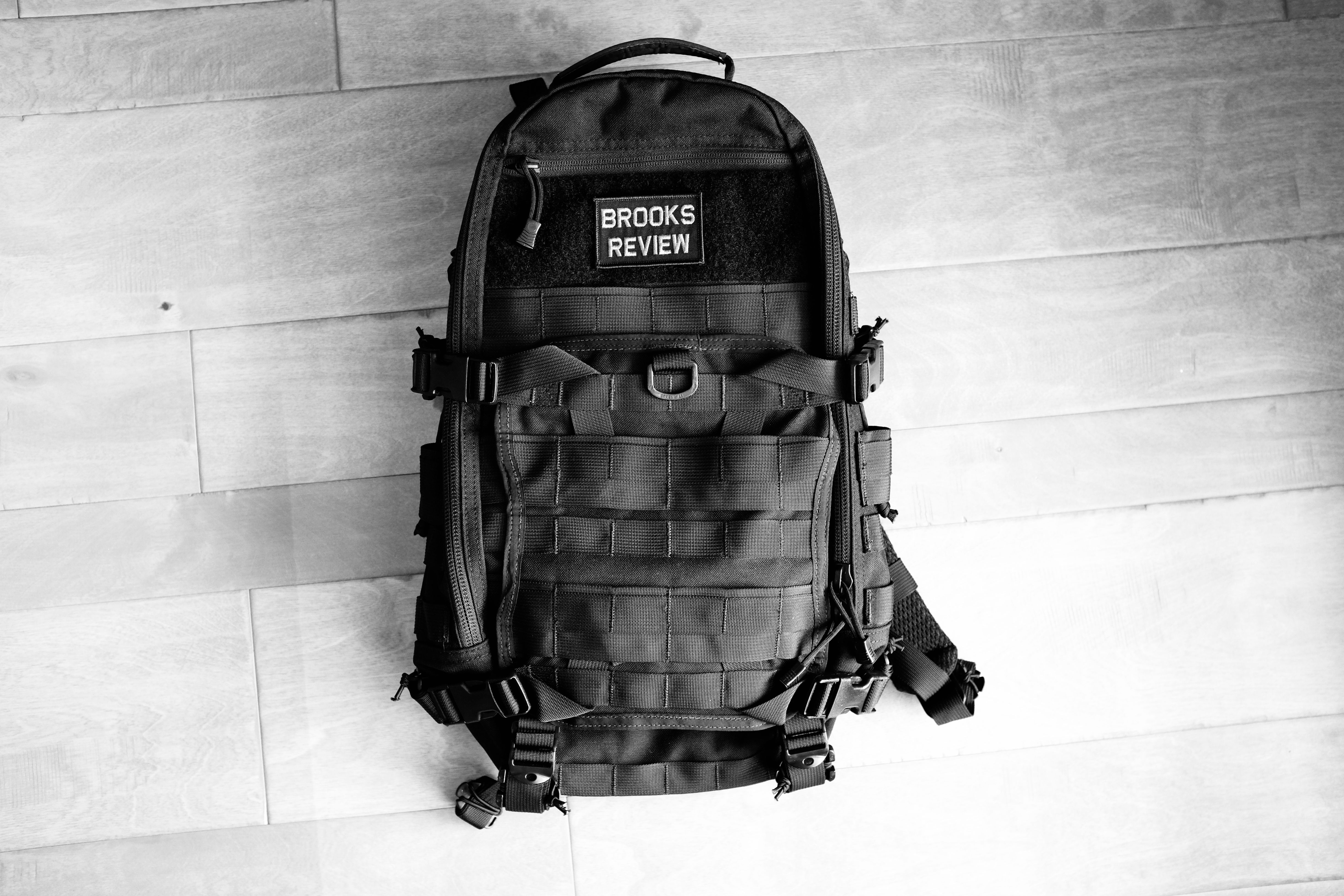 This bag is one every bag reviewer has to touch at some point, because it is recommend everywhere — but I have no clue why people love it so much. Maybe just because it looks cool?

This bag is 1000D Cordura, the same as many other tactical backpacks (note that Triple Aught Design calls it ‘Invista’ Cordura — where Invista as far as I can tell is the name of the brand that makes Cordura). From there Triple Aught Design does a most excellent job specifying the materials which are used throughout the bag. Most of which go unmentioned by other brands, making this list of materials hard to place in context of other bags. 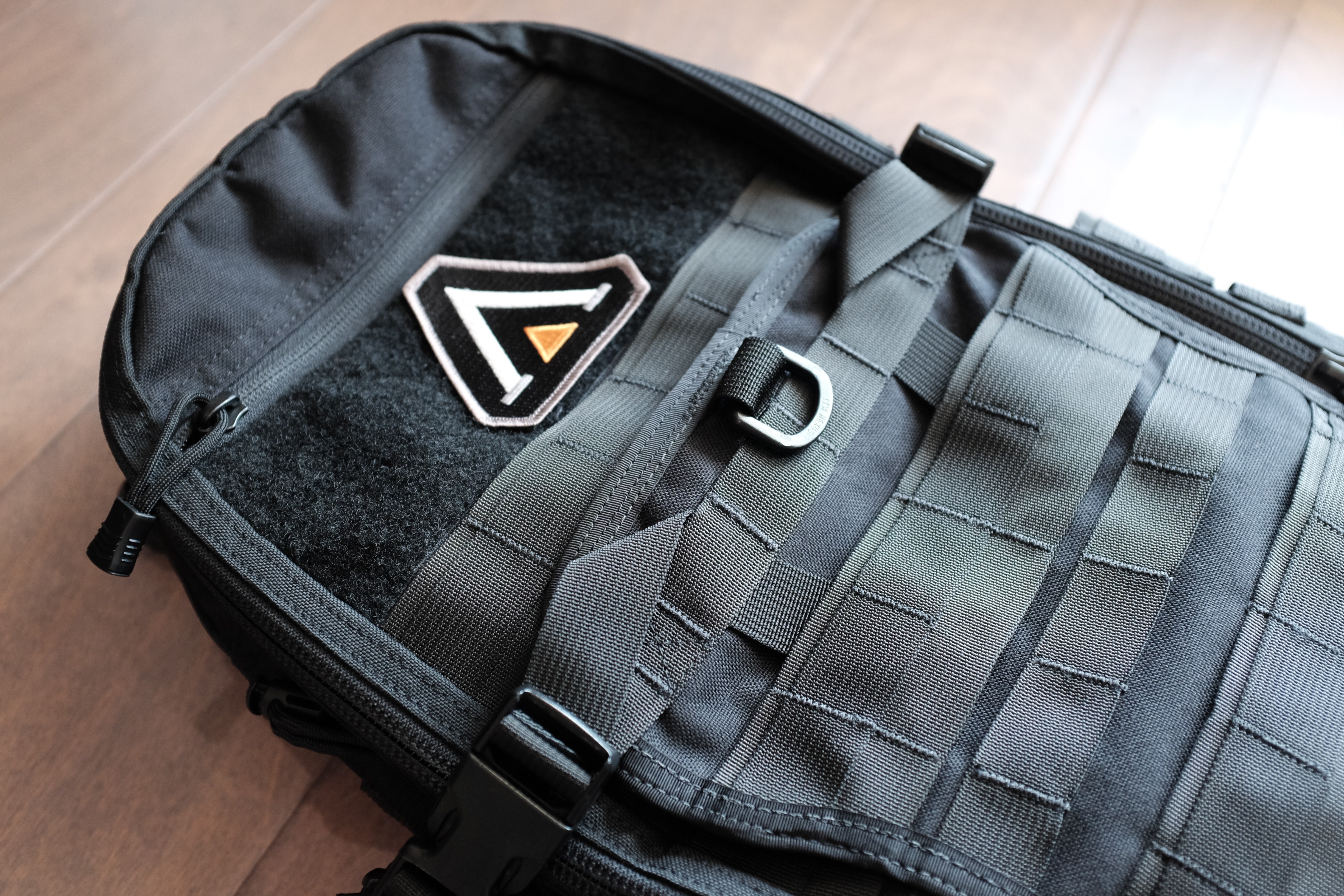 Material-wise, I don’t know that you could ask or want for anything better, this bag basically is the everything bucket of tactical materials. 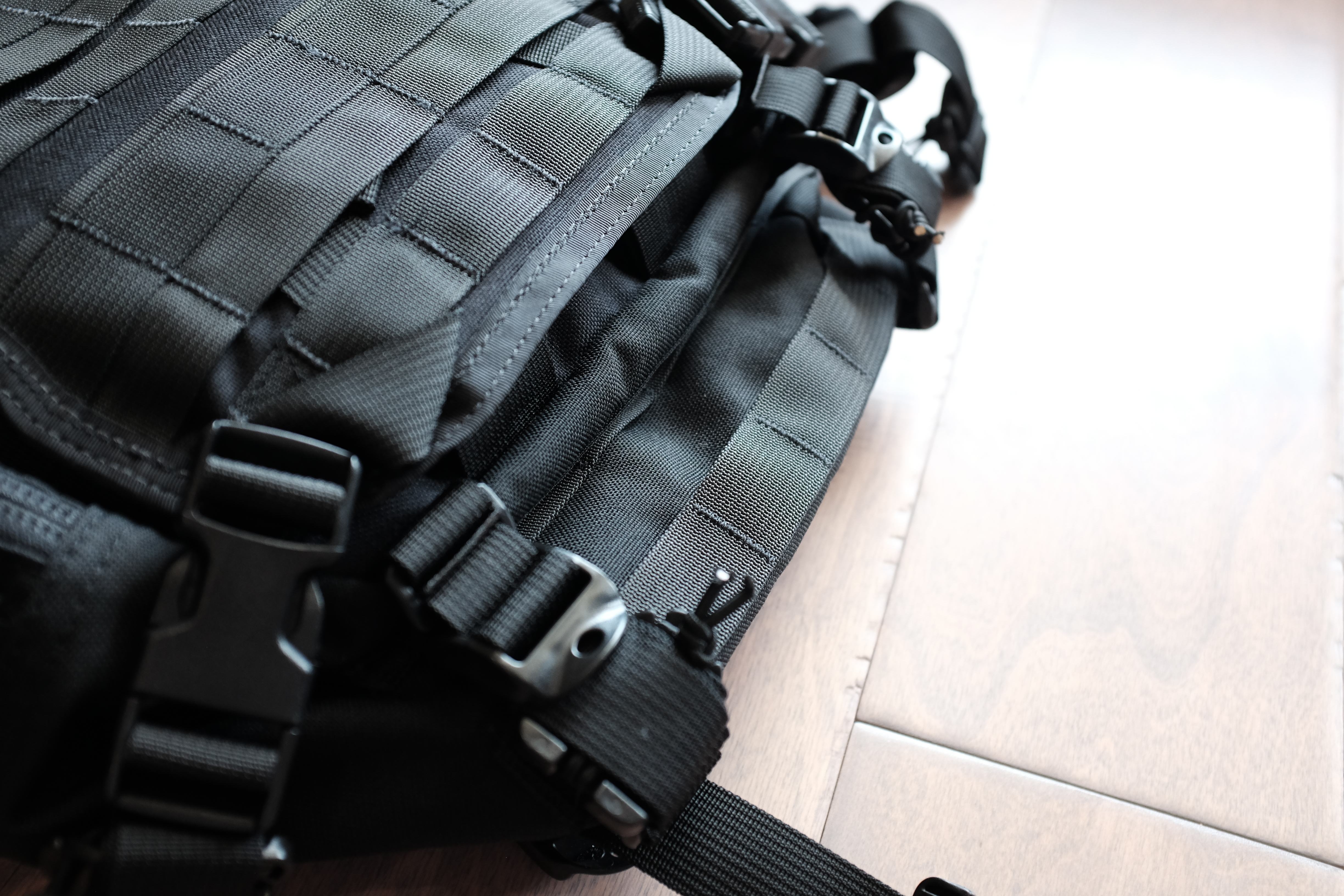 The downside to all of this is weight, for a 22L bag it weighs an insane 3.8lbs empty. As a point of reference the 21L GR1 weighs in at 2.9lbs and one of the biggest complaints I hear about the GR1 is how heavy it is when empty. When I first picked up the Litespeed I laughed out loud at how heavy it felt — I thought the person who sold it to me had left a gold bar in it for me — but no it’s just silly heavy.

There might not exist a more tactical looking tactical backpack than this one. I mean, yes, there are others with a ton of MOLLE/PALS but this bag doubles up on all that, adds copious amounts of straps, has paracord going around another bit, and then just sprinkles more MOLLE on top of this. Seriously, I think the designers over at 5.11 look at this bag and step back and go, ‘whoa, that’s pretty tactical’.

But then at the same time, the back looks sweet. I don’t love most tactical looking bags, but they nailed the look on this — if you are going to go for a tactical bag, might as well get the coolest looking tactical bag on the market — that’s definitely this bag.

Here’s my thought with this bag: it looks tactical as all hell, but it doesn’t look military. When I am looking at software designs I often can be heard saying “that’s movie UI” which is to say it would look really sweet in a movie where no one has to actually use it, but once you go to use it, the illusion falls apart (think Minority Report, Westworld, etc). This bag is kind of like that: it’s Hollywood tactical — it’s something you see in movies but not in real wars (see also ‘The Old Guard’ where the bag was featured). 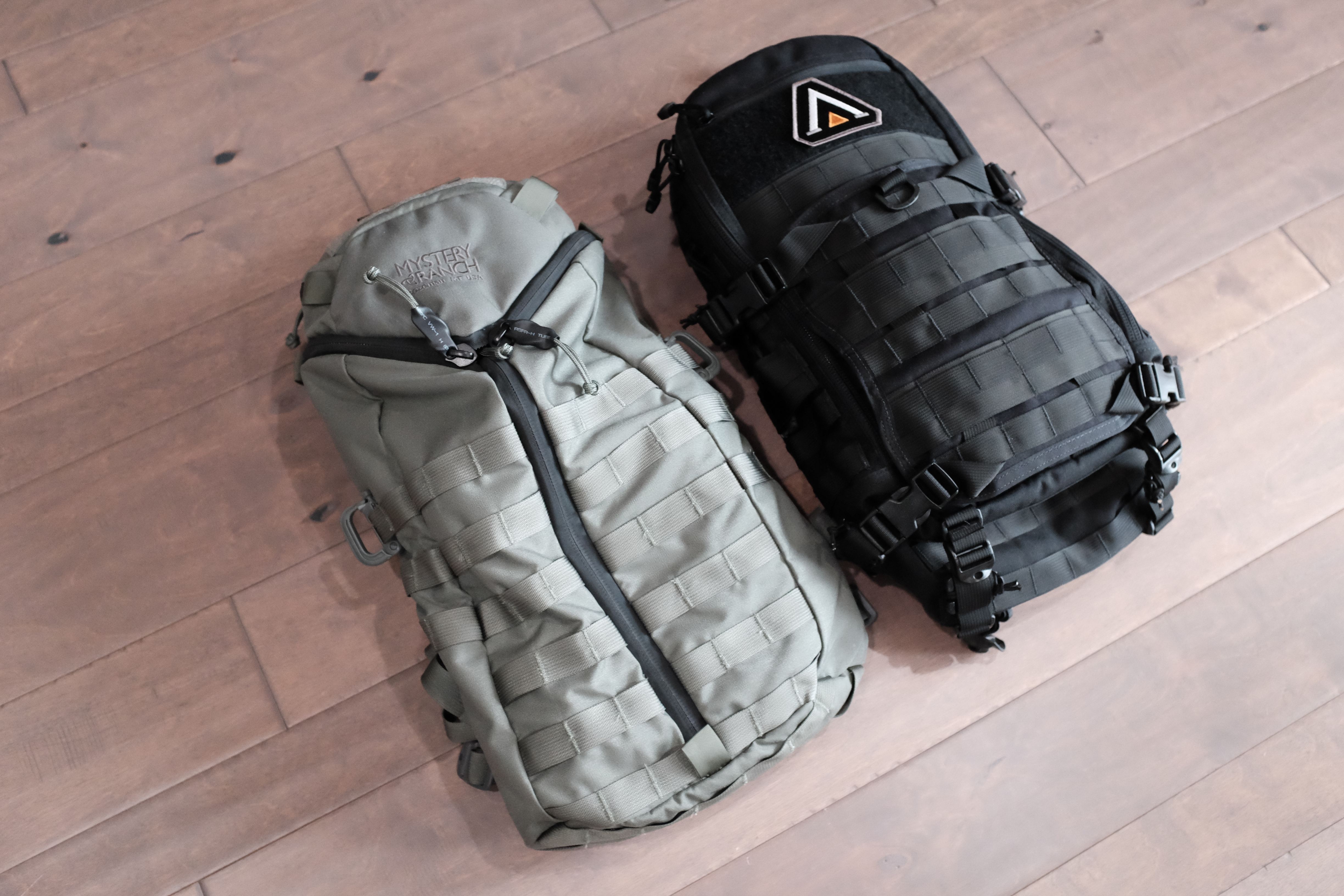 None of that is to diminish the utility of the bag, but it’s to say that while the bag looks tactical as hell, it’s more “San Francisco Tactical” than it is “oh no this person looks scary tactical”.

I like it, I don’t know if it fits my style well, but I do think it looks sweet. Even better in person than in pictures somehow. Triple Aught Design says they sell a ‘sterile’ transporter tail for the bag, which will subdue the MOLLE on the bag, but I’ve yet to see it ever be in stock so you could buy one to use.

Capacity and Load Out

For an EDC bag it checks all boxes on the sizing and capacity. Triple Aught Design lists it as a 22L bag — which is an ideal EDC size — but I think the bag is smaller in practice than that, closer to 20L of practical volume. Still a great size, but worth noting as that can be on the edge of too small for a lot of people. 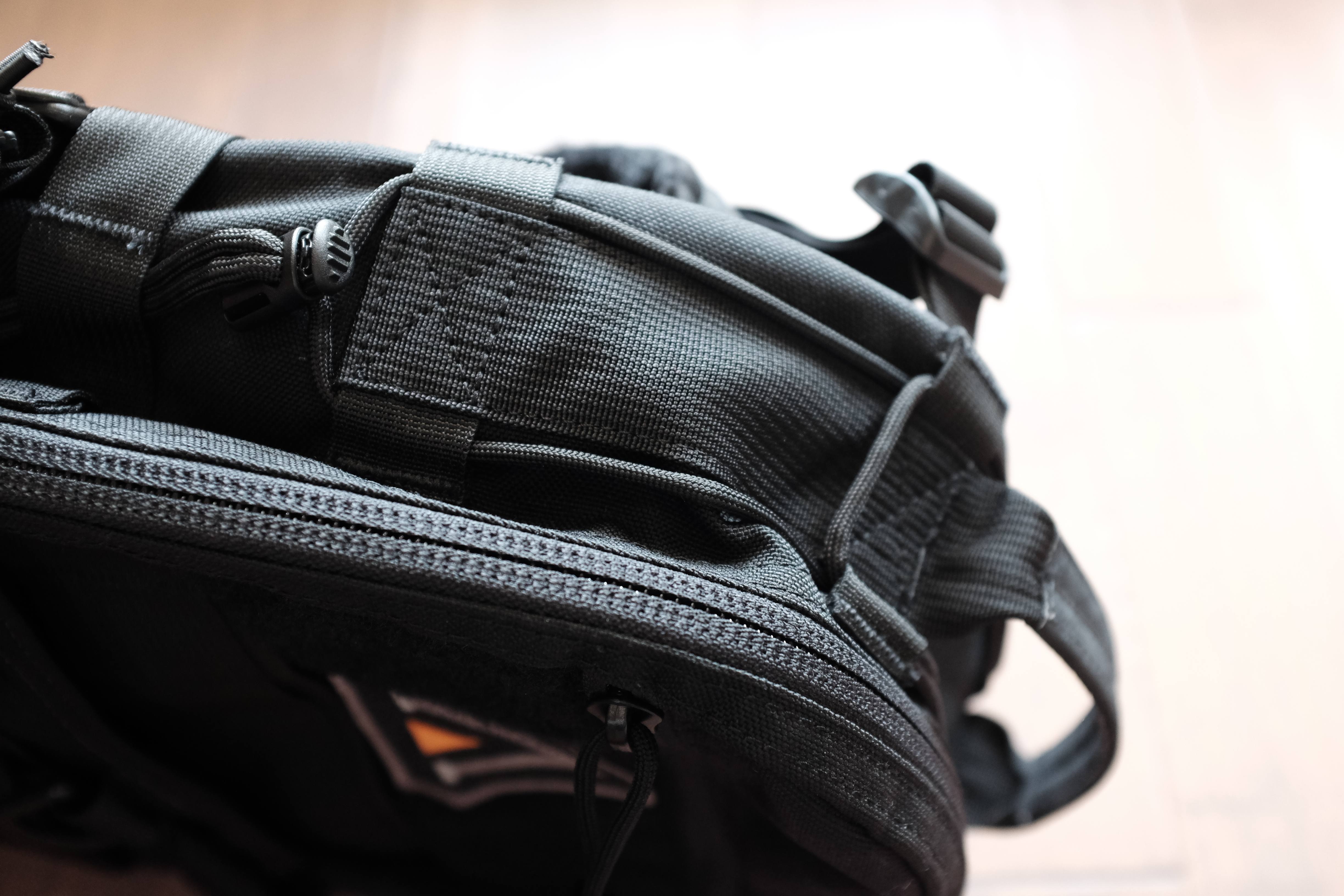 Paracord is configured around the top of the bag for storing clothing-type items.

Better still is the actual dimensions of 20” tall, 10” wide, and 6.75” deep. That’s perfect dimensions in my book. Tall enough to work for almost anyone, while being narrow enough to fit smaller frames. The depth is also ideal — slim enough not to be bumping into everyone. There’s also compression straps all over this bag to push that depth down when needed. 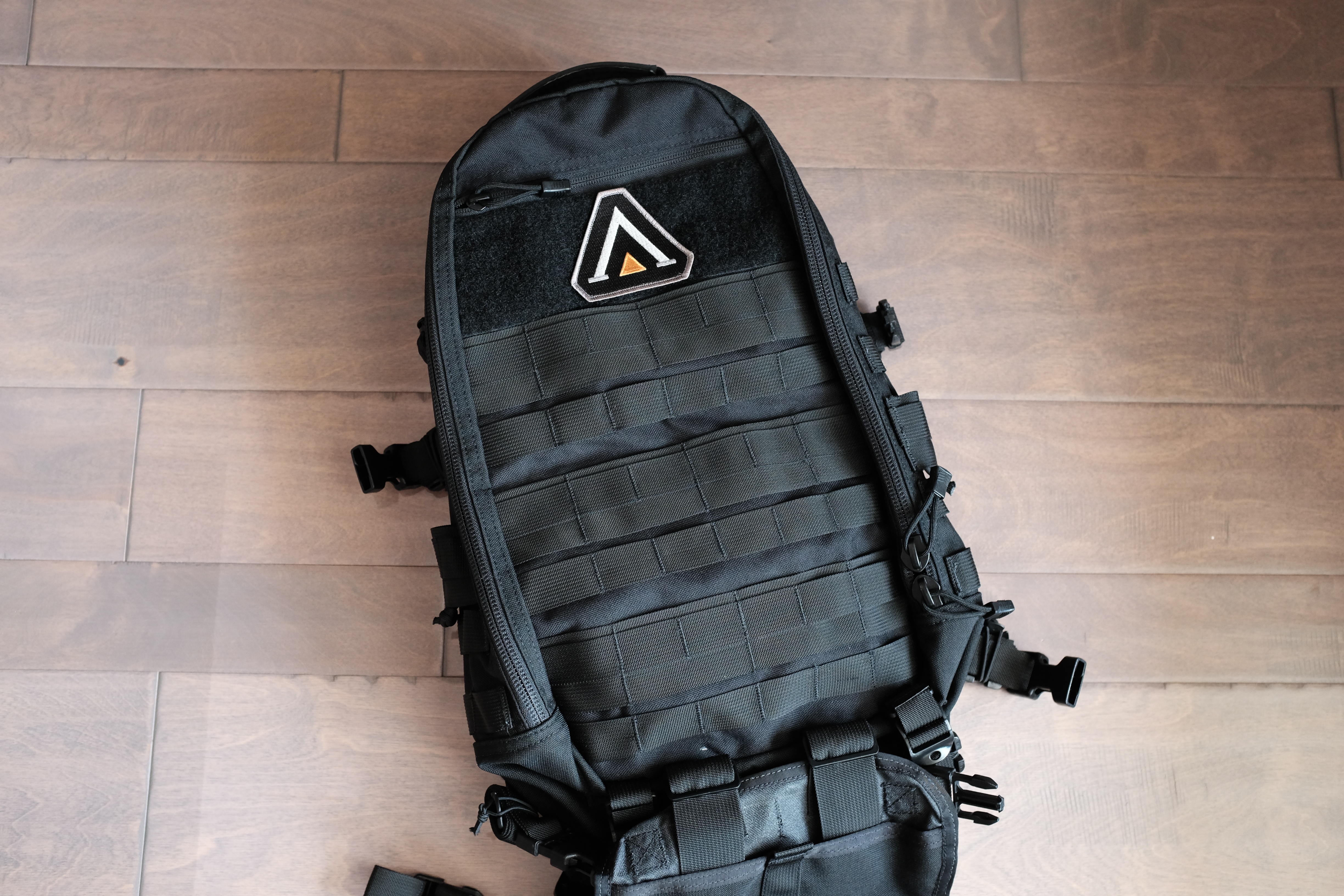 The bag comes with a “Transporter Tail” which is additionally MOLLE and additional straps. This is a Beavertail for the bag to allow you to store more gear on the outside of the bag (like a jacket or anything large), or to support something like a rifle or tripod depending on the war you are waging. This tail can also be taken apart and placed inside the bag, to serve a similar purpose in the bag since the interior is lacking organization. 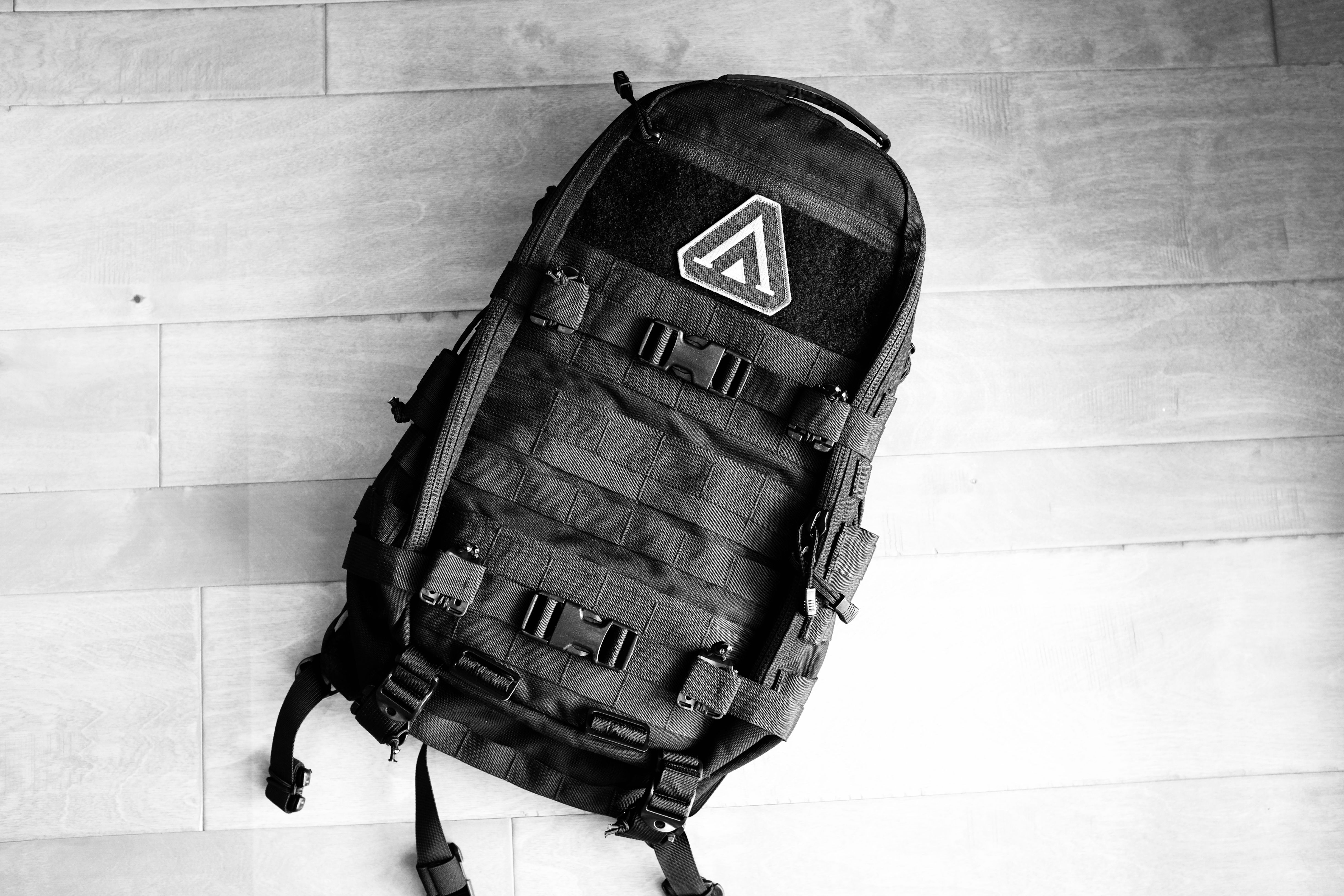 Transporter Tail removed, compression straps then extend across the front if you want.

If you have the constantly sold out Triple Aught Design gear like the Transporter Sleeve and the Control Panels — you’ll like the bag more. I have neither. Adding the tail into the inside of the bag is the most useful thing to do when you are lacking the other accessories and I assume most will be lacking them. 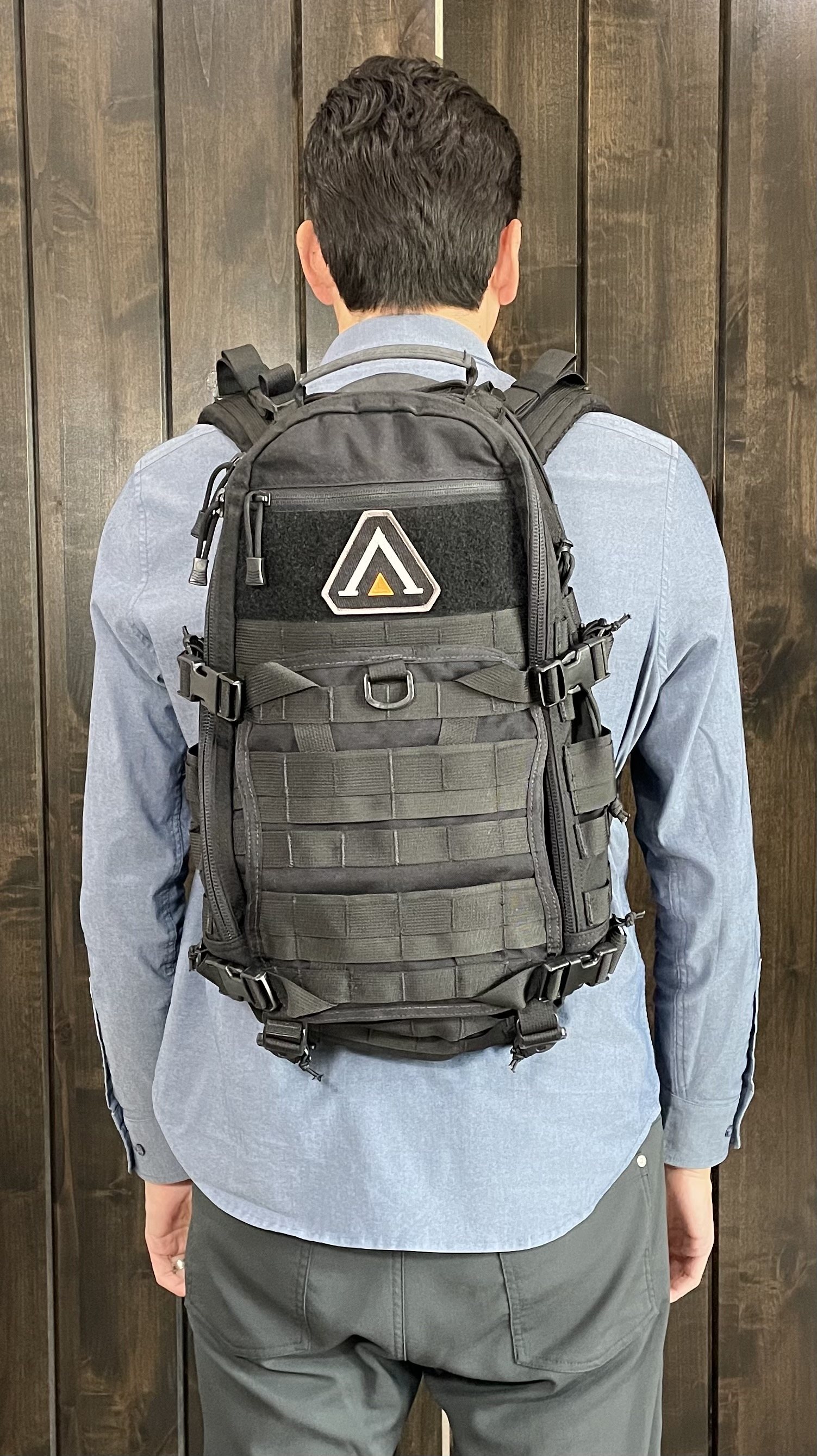 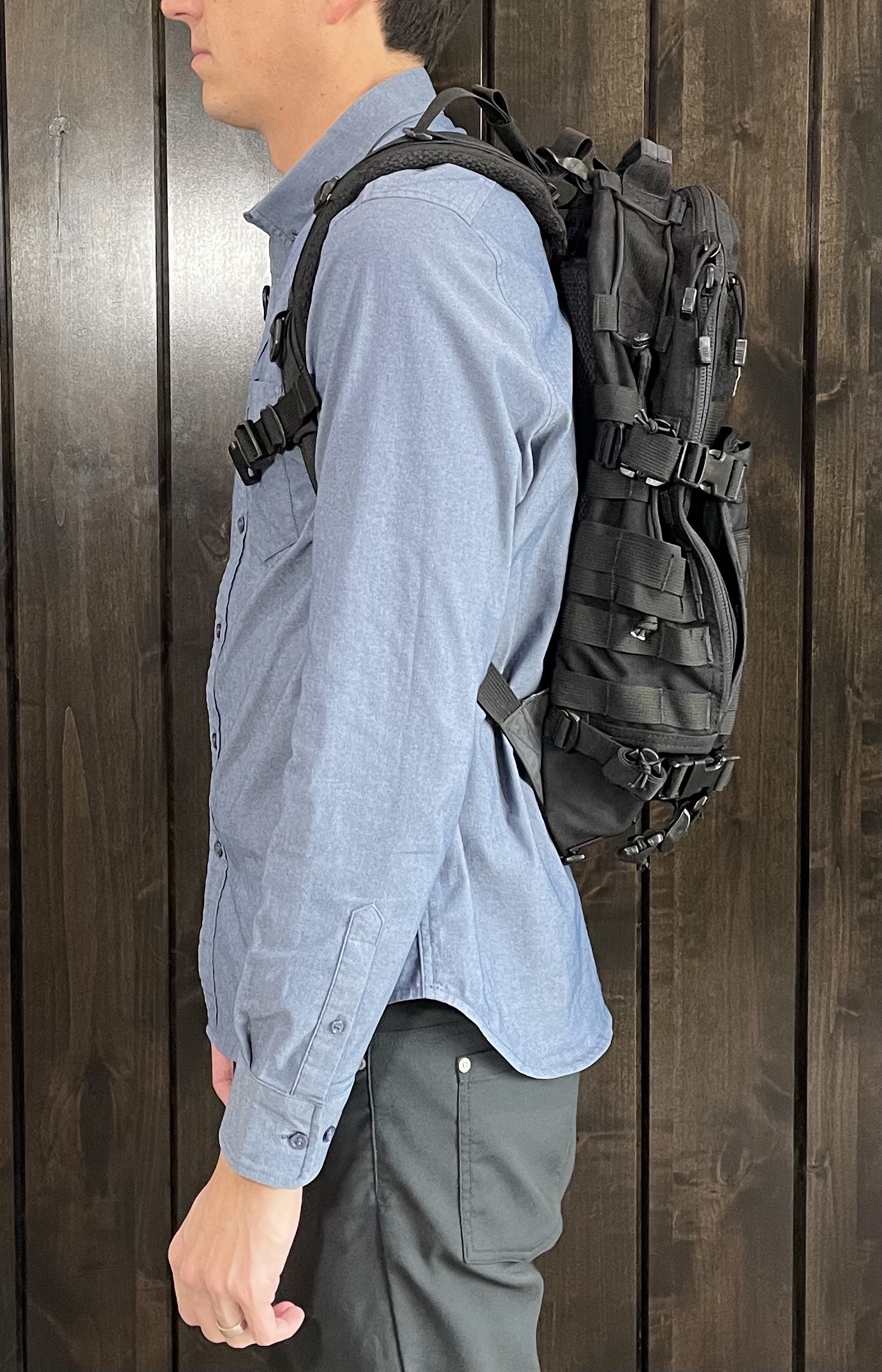 The bag is very close to a fully opening clam shell style, but it stops short. Why? No idea. But is is very annoying to use like this and needs full clamshell.

I tested this bag for rucking to see how the very narrow and not contoured at all straps hold weight. I suspected rucking with it would suck, but somehow it sucked more than I anticipated. I only rucked with 30lbs and, yeah, not good at all. 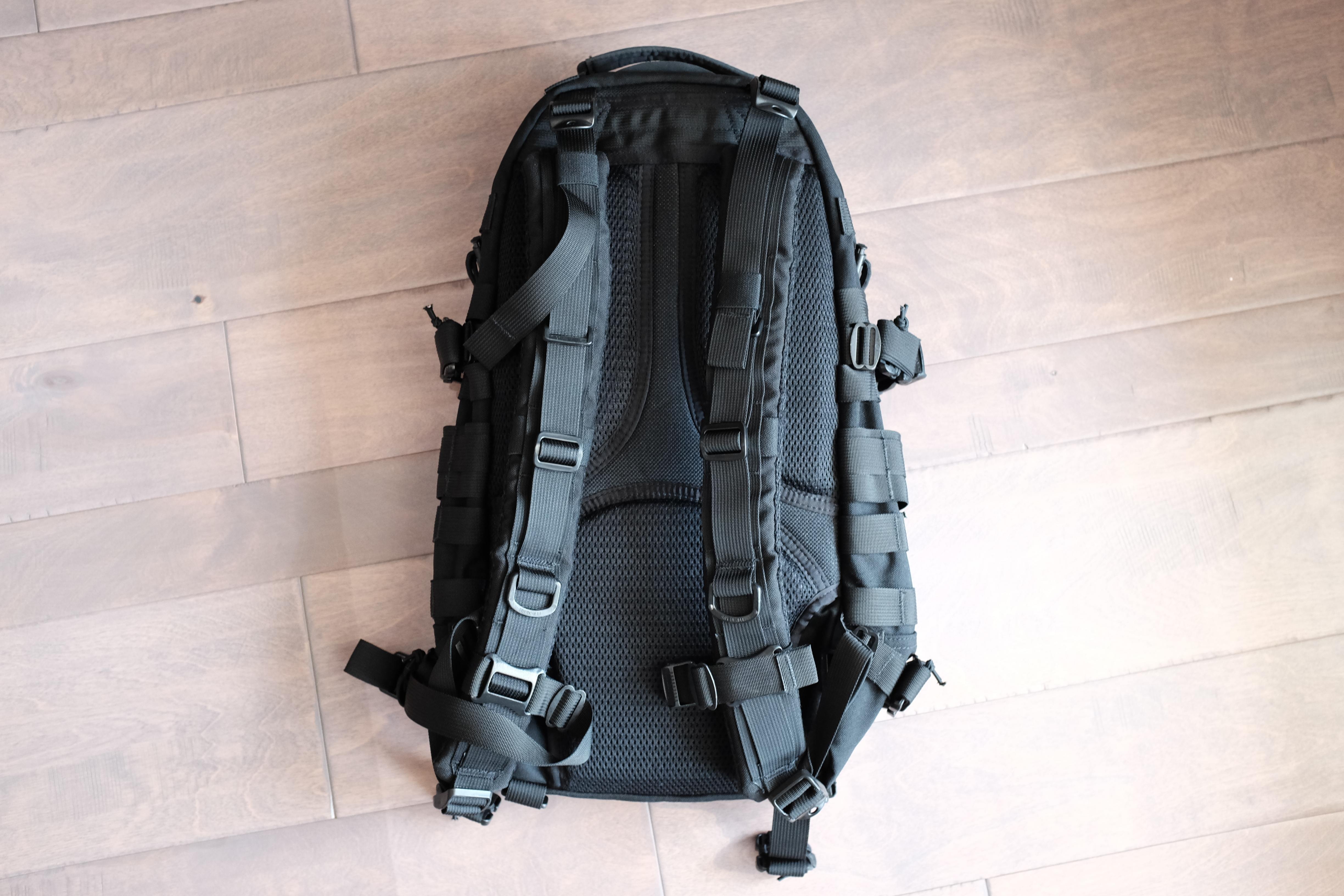 The bag held up without any major wear and tear, but you could hear the bag stressing when you picket it up by one strap or the grab handle. I do not recommend this bag for rucking. Further it was not comfortable in any way with that weight load, and given that the bag already weighs 4lbs, you are going to need to try and keep the total load under 20lbs if you want to be comfortable. These straps are silly.

20lbs sounds like a lot, but its very easy with a 5lbs laptop and a water bottle and a 4lbs bag to get to 20lbs very quickly. This is far from ideal. 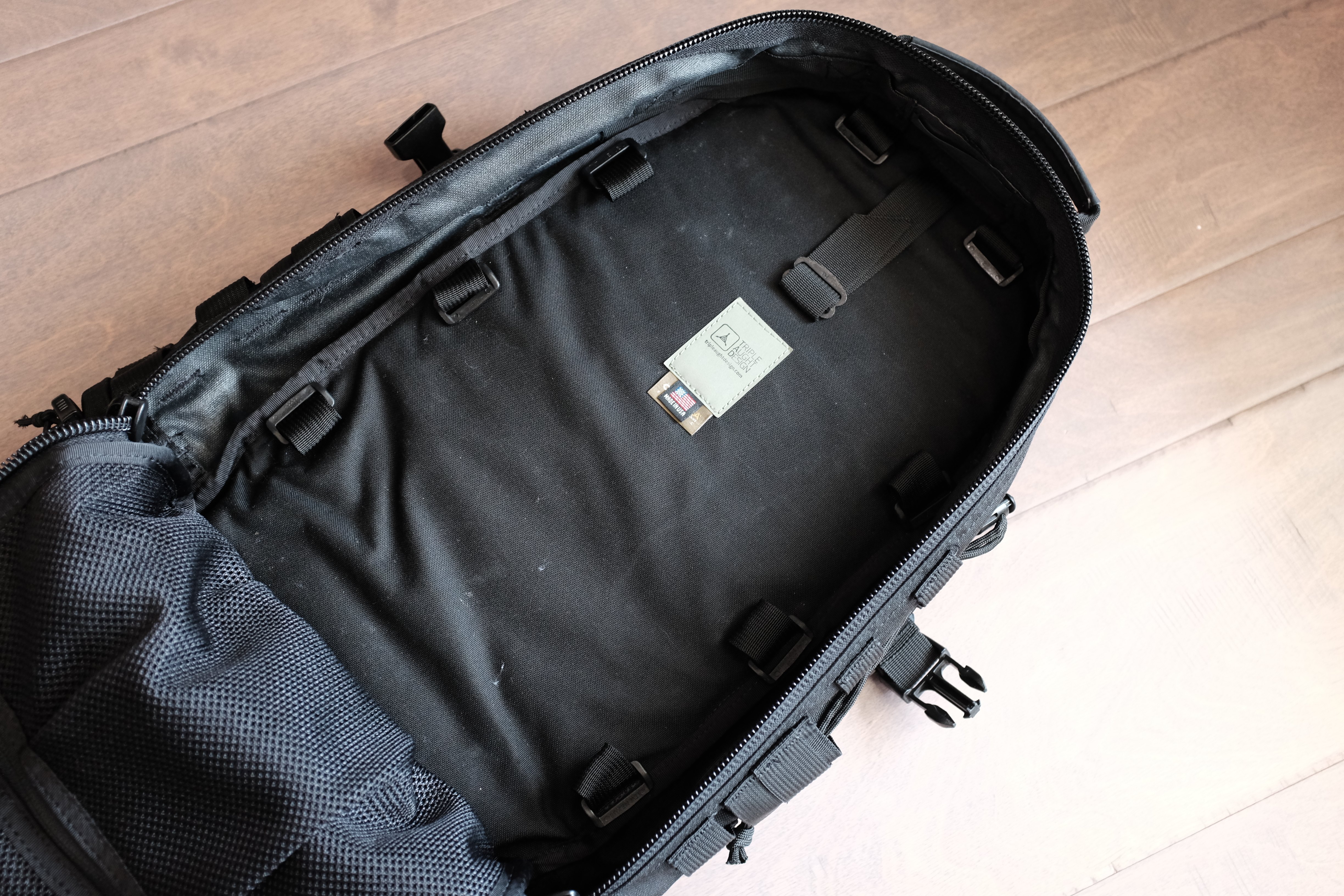 Without adding anything to the interior, it lacks organization.

It’s not ideal for this use either. There’s no laptop area, so you have to bring your own, and it’s a narrow bag so some laptops will be a tighter fit as is, especially if you snag a bulky laptop sleeve. (I recommend the Tom Bihn Cache sleeves.) 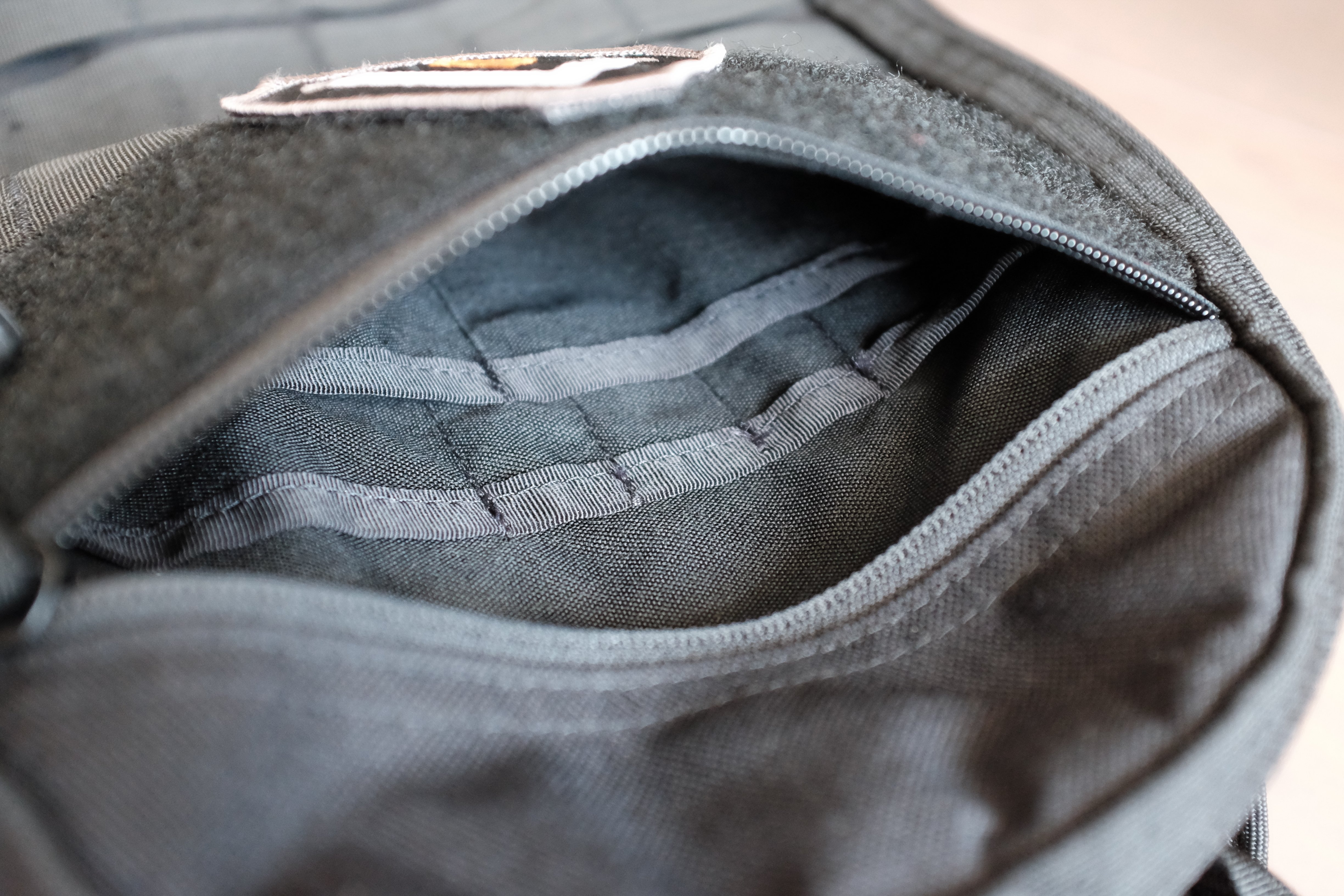 The one bright spot is the admin area in the front pocket of the bag. It’s cavernous and organizes stuff really well. The two inner mesh pockets inside the bag are also large and hold things nicely. The bag is really close to being great for EDC, but it needs a better laptop setup. Even with the Transporter Tail moved to the inside, with a Cache sleeve behind it — it is a process to get a laptop in and out of this bag. So much so I would say it is borderline not worth bothering carrying this bag if you need to carry a laptop. Which, makes it useless for most people for EDC. 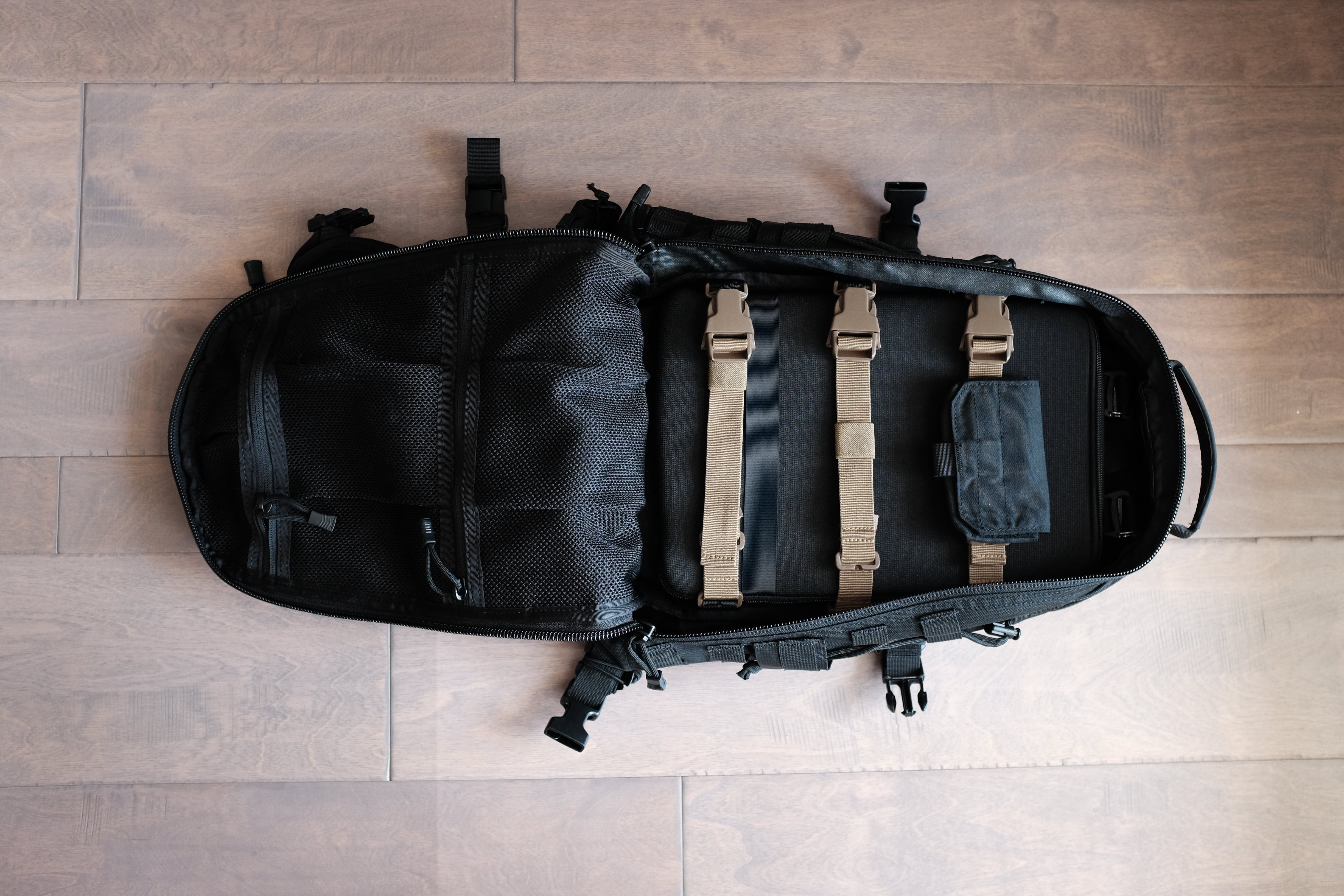 Tom Bihn Cache with some load straps helping to keep it in place.

Shifting over to day hiking with the bag, I found it passable. With lighter loads, and the more odd ball stuff I like to carry I found that this bag worked well enough. It wouldn’t be my first pick, or even my second, but it was fun to hike with. 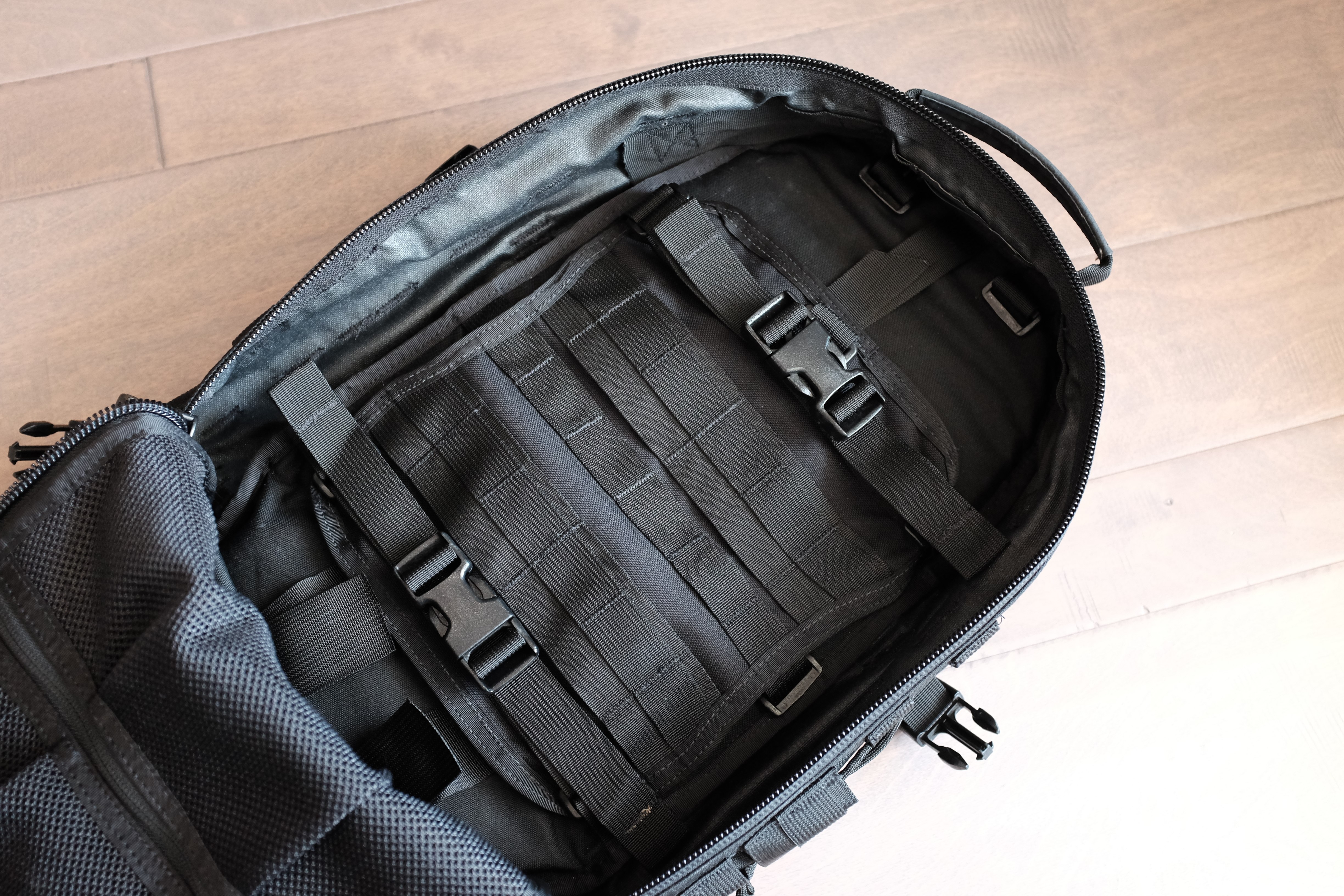 Transporter Tail inside the bag, takes about 5-10min to do this, silly.

The stand out features for hiking:

Aside from that, the shoulder straps were again the let down for day hiking — they are too narrow and lack contouring, and are therefor not comfortable. The straps either need to be wider, or stay narrow and gain contouring. These straps make no sense as is.

I just don’t get this bag. It looks cool as hell, but no matter what I tried to use it for, it wasn’t even close to ‘good’. I don’t recommend buying this bag until some of these flaws are fixed. It’s too expensive, and too limited in how it works. It takes a lot of configuring and reconfiguring to move from one thing to the next. Can it do that? Sure, I guess, but I didn’t find a single thing I thought the bag excelled at.

Until then, no thanks.

You can buy one here, but I don’t think you should buy one.