This light is really awesome, but that’s the LED not the body. The KR4 itself has questionable quality attributes for me to recommend it, but a D4V2 in Deep Red, heck yes.

This is kind of the tail switch version of the D4V2, functionally it’s the same but you are clicking from the back of the light instead of on the side. So I am going to focus this review on the LED itself not on the body so much.

Know that this is a great light, but made awesome by the LED option of Deep Red. 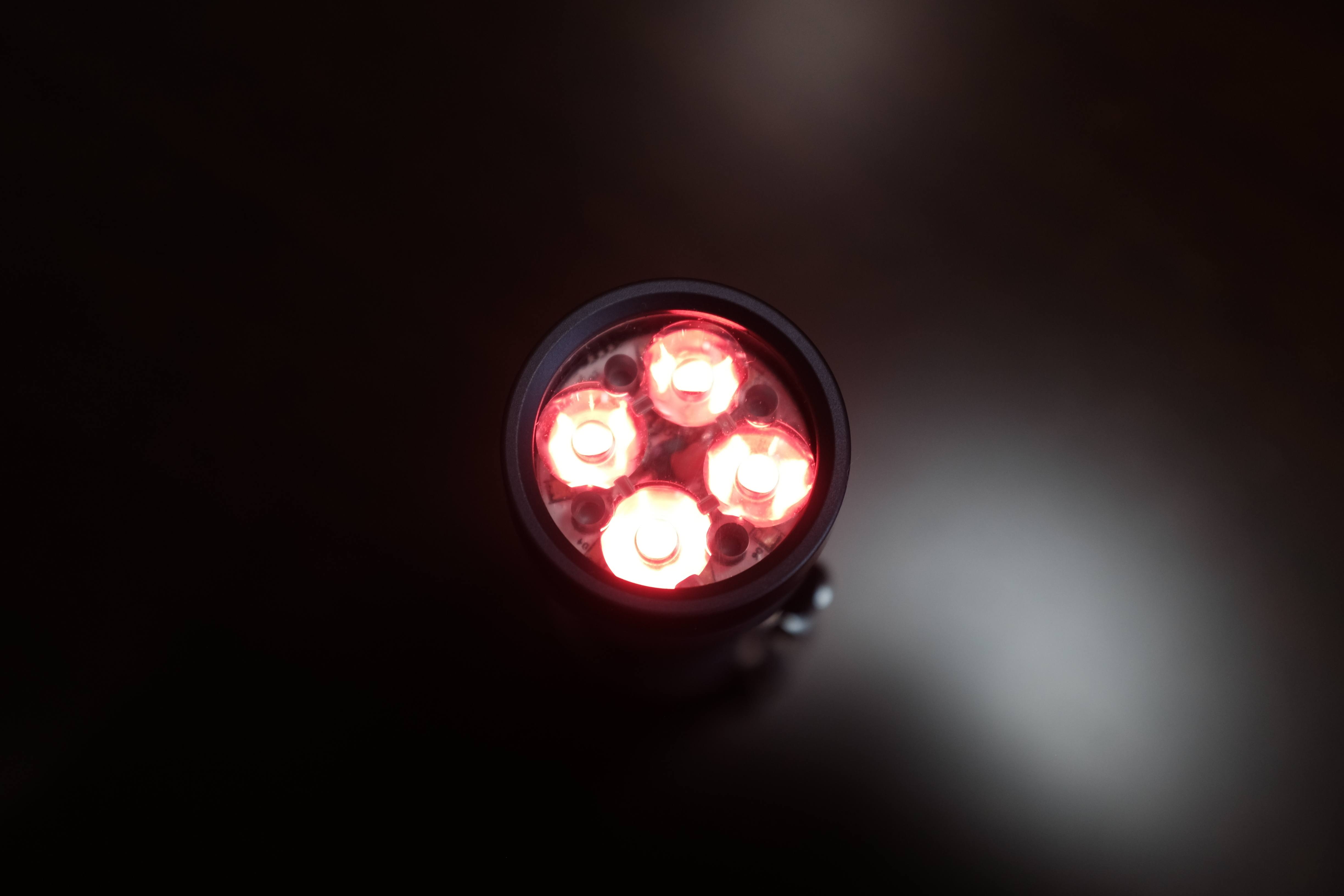 The heart of this entire light is the LEDs, I selected ‘Deep Red’ which is an SST-20 outputting red light at 660nm. That’s the extent of what I know about it. So let’s talk about the practicality of how hard this is to justify: it’s four super red LEDs that are the most fun things ever. The red is very rich and fills up the room. 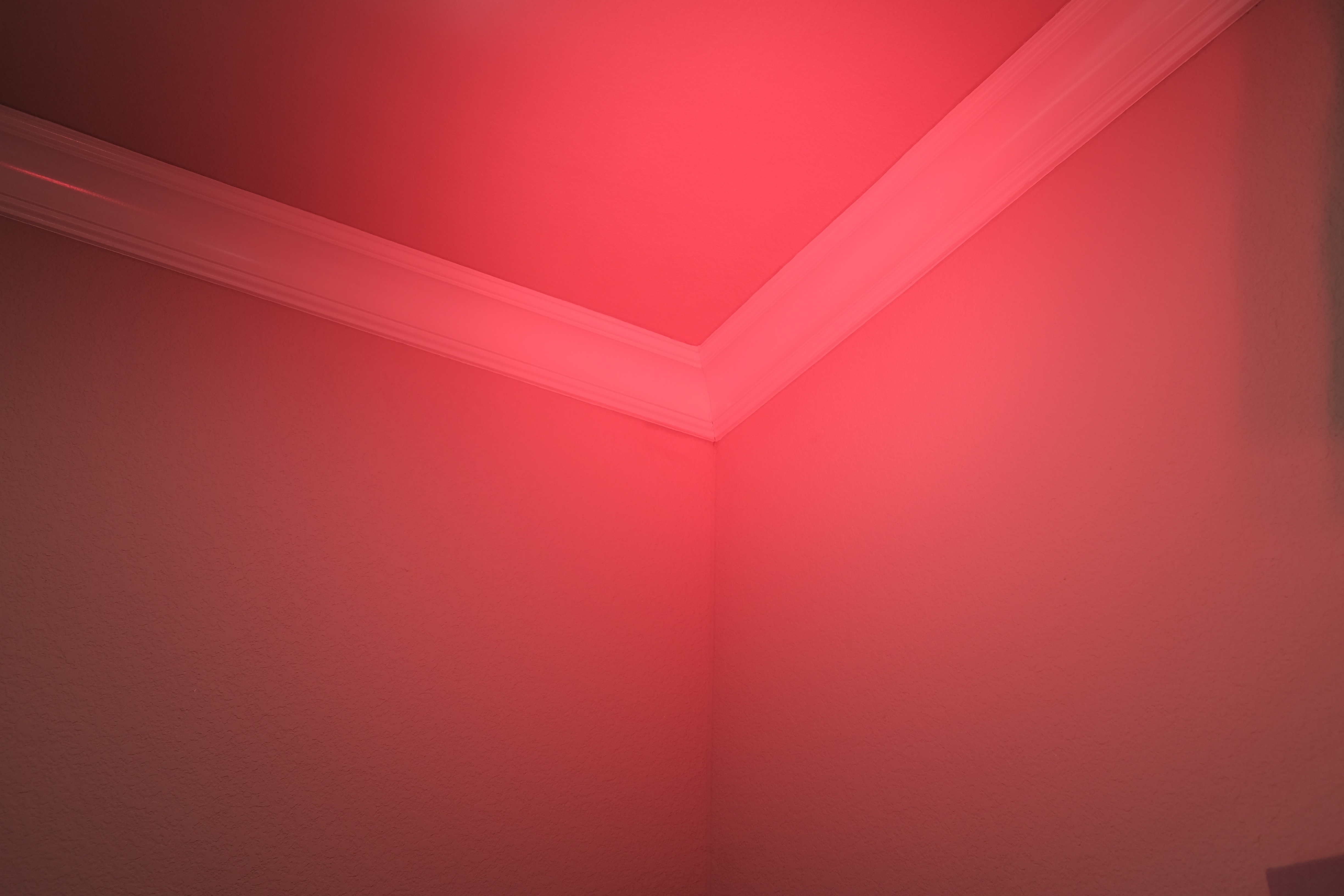 Weird picture I know, but that’s the corner of a well lit room during broad daylight. That’s full power, this is a lot of red light power in this package.

The why of this is simple: it’s cool. Wait, I think I should actually say that it helps preserve your night vision to use red light and all of that — except that this light can put out the red light at such a high power that it’s overwhelming to look at in the dark. 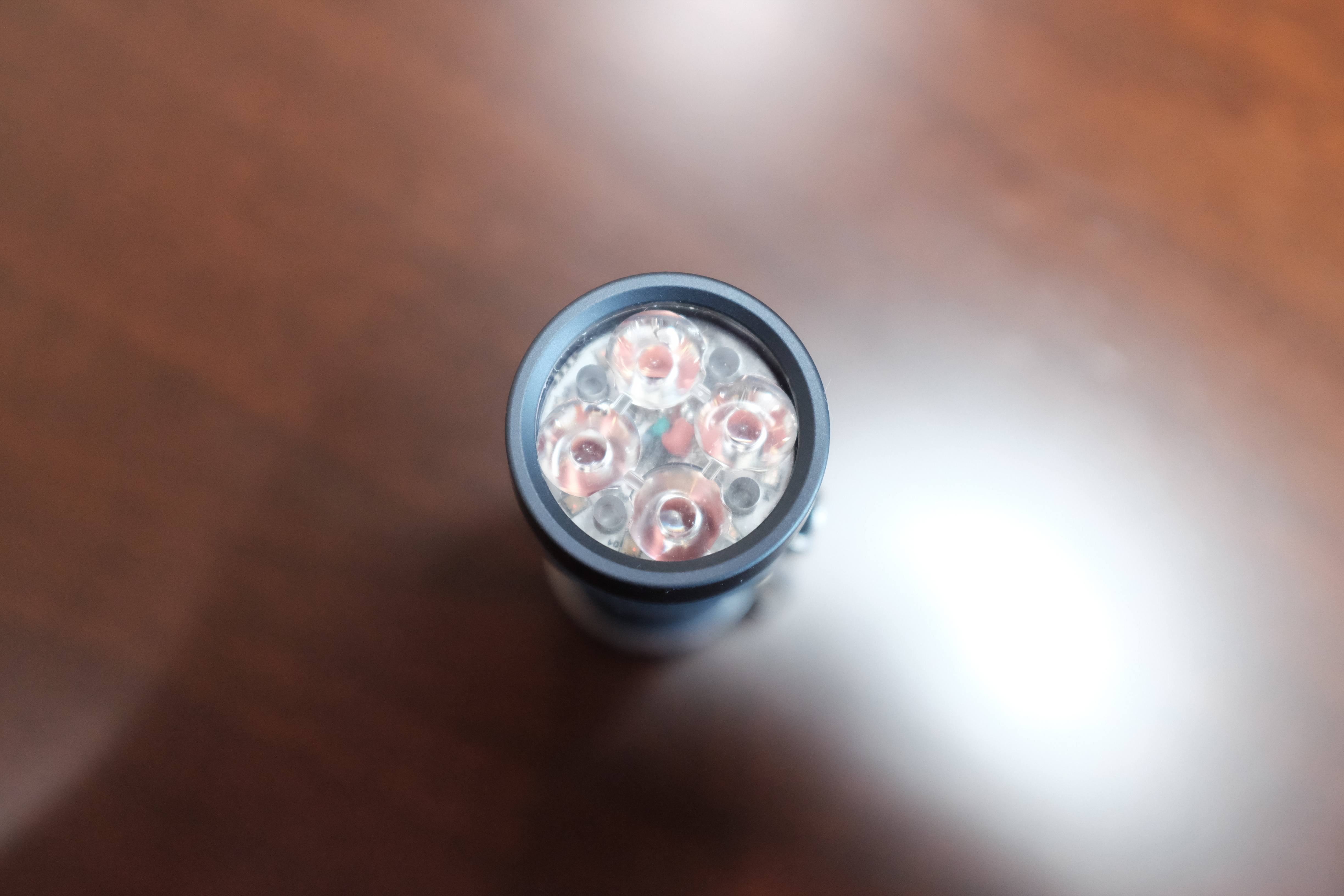 If I run it on turbo in the dark and my eyes are in pain. Keep it lower, and it’s fantastic. On turbo, my eyes hurt and really struggle. During the day, you can actually push enough power that you can use it as a flashlight still, which is a first for me with a red LED. That’s pretty cool too. Pointless things you can do with a red LED.

Which is why I will say it again: an all red output flashlight is my new jam and this thing is silly and I love it.

There’s one caveat to my statement above about how good this light is: the switch didn’t work well out of the box for me. And I had heard from a reader this was a thing that happens, a quick email produced a video back to me asking me to file off a little of the battery tube sleeve. 30 seconds later the light worked perfectly and has done so from here on out. That’s really silly and for that reason, get the D4V2 not the KR4 — that’s why I am focusing this on the LED not the light body. 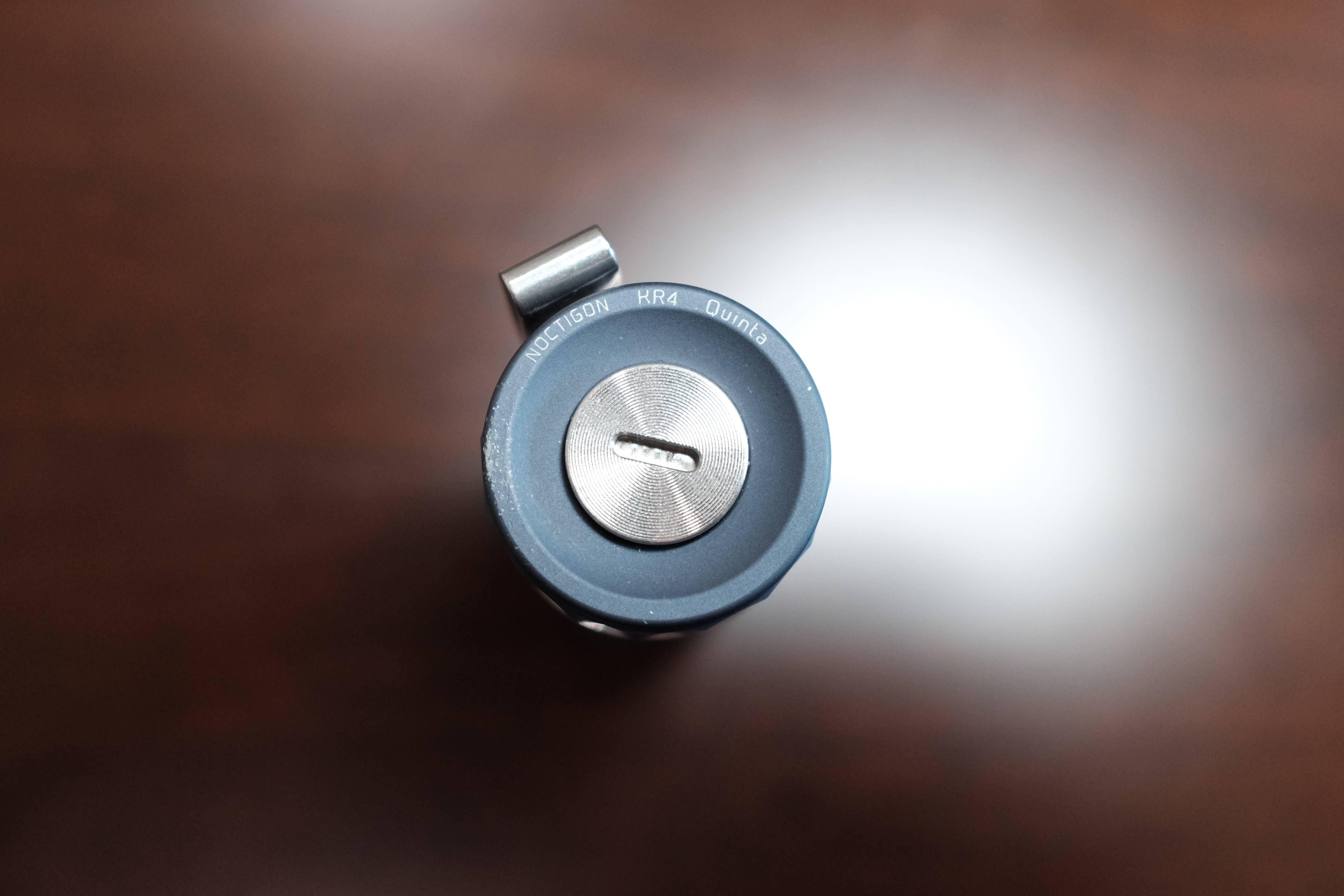 Back to the LED…

It’s deep red and that’s really cool. This has become my nightstand flashlight and for that it’s killer. I keep it setup to turn on at the bottom level (default bottom) power and that’s almost not noticeable during the daylight hours — but at night it provides a perfect amount of light for navigating through a dark room. 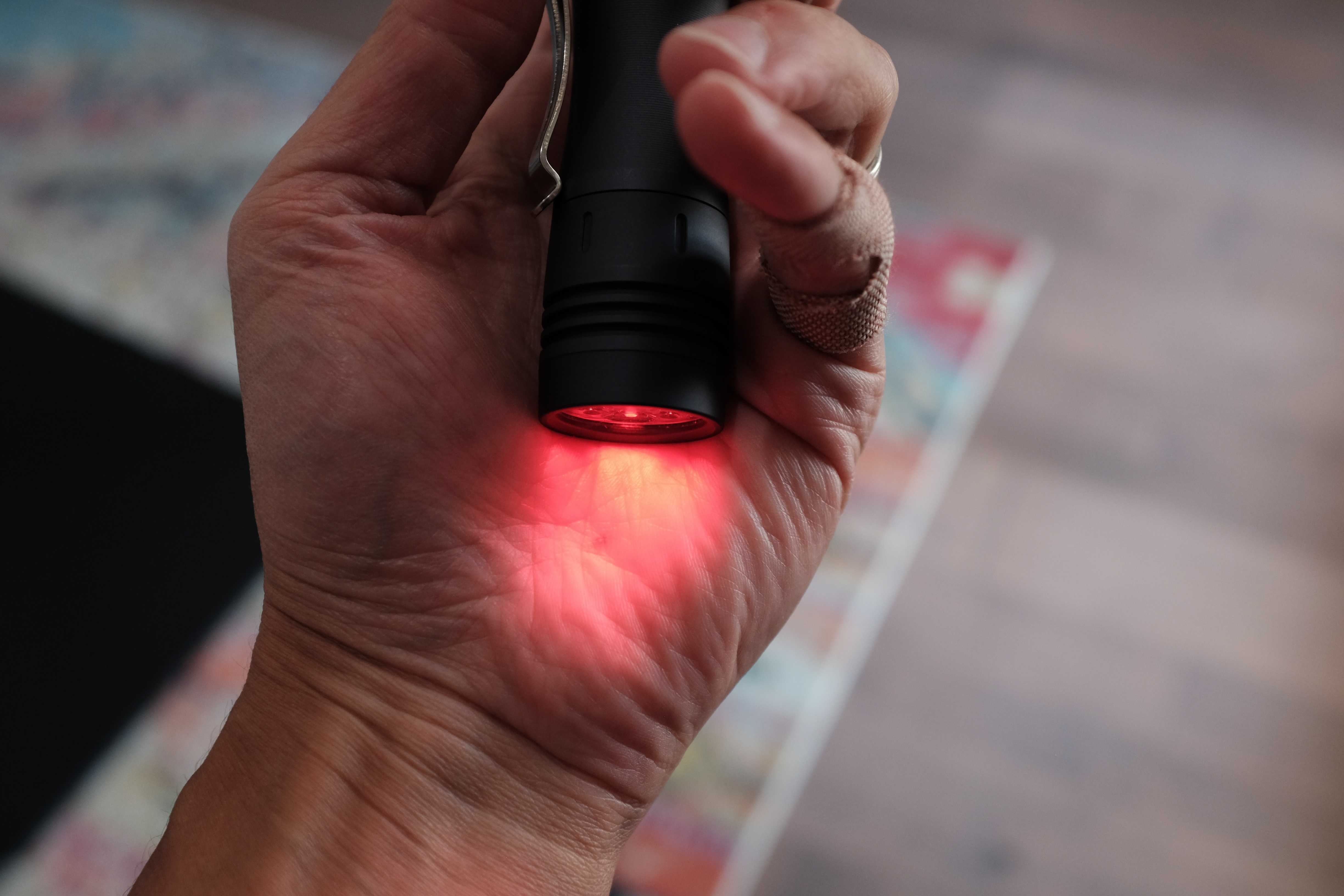 Pop up the power about 20% and you have enough light that you can easily search around for the clothes you want — assuming you don’t need to color match anything. In use: it’s a red LED flashlight, big fan. 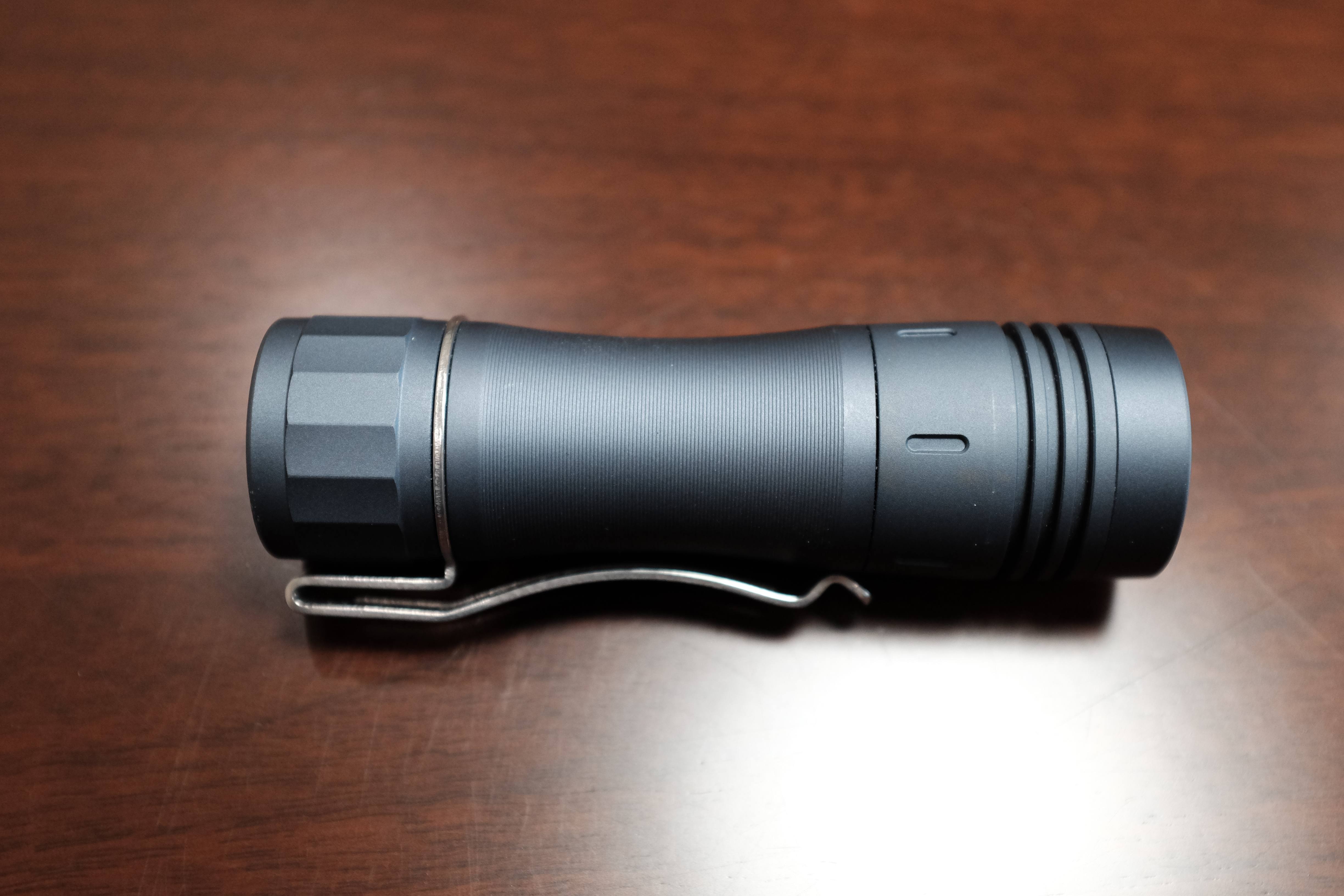 Here’s the short of this: the KR4 is not a great light because of QC issues which still seem to plague it, but the SST-20 in Deep Red is a heck of a lot of fun. And I think probably the third light you need in your collection — it’s weirdly my most used light at home now. 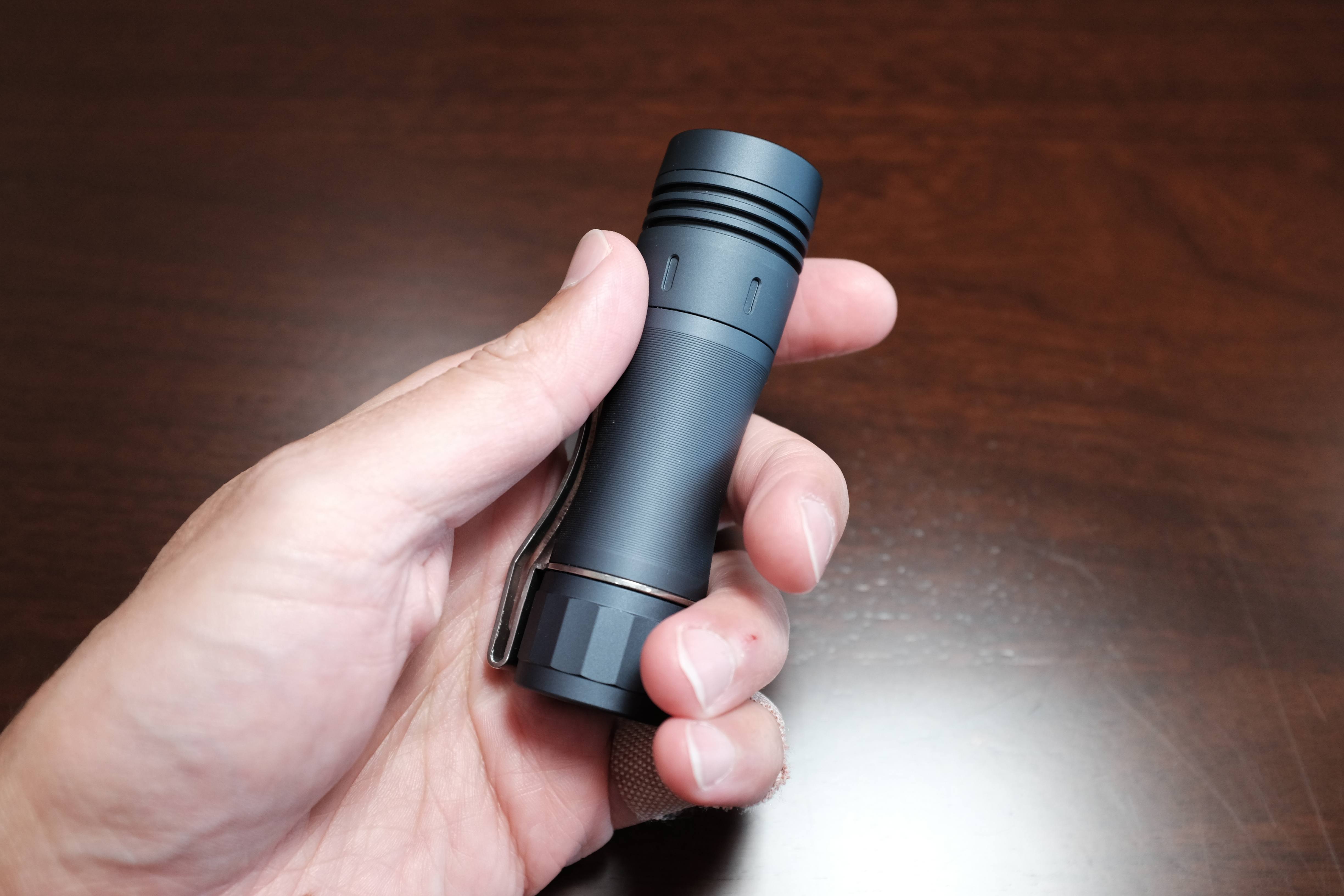