I love this light and it’s so much better than the website for it, or the spec sheet for it, would lead you to believe.

Update 12/13/21: HDS has COVID misinformation on their website/blog, this is very unfortunate to hear. Please keep that in mind when/if considering ordering from them.

This is one of those lights I have had my eye on for a long time. It’s expensive, has a weirdly low lumen output, yet an interface people rave about. Looking at it compared to most of the lights I’ve talked about on a spec sheet — it’s the one that seems to make very little sense, a ‘why buy this?’

After all: it’s big, heavy, no clip, and low output. The thing is, it’s the best light I have ever used. It’s the HDS EDC Rotary. 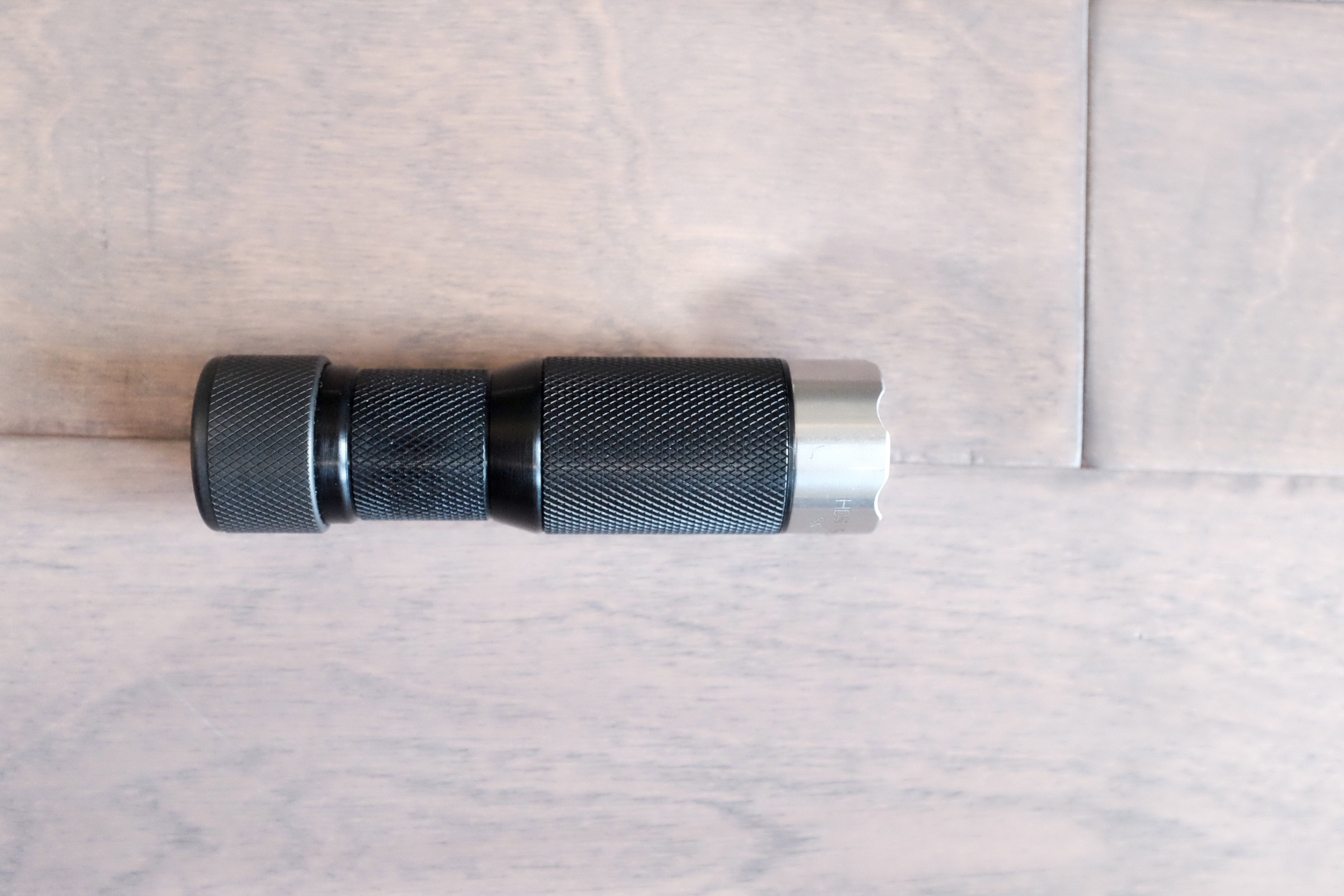 Here’s the deal with this light: the stated output levels are laughable in today’s lumen output races. The stock variant of the HDS Rotary is rated at 250 lumens of output from the single CR123a battery. The variant I bought was rated at 180 lumens from that same power source. And now you think I have lost it, because you certainly recall that the SureFire E1B-MV Backup runs at 500 lumens off the same single CR123a. One hundred and eighty lumens is a very low output, especially for a flashlight at this price point and with this battery. 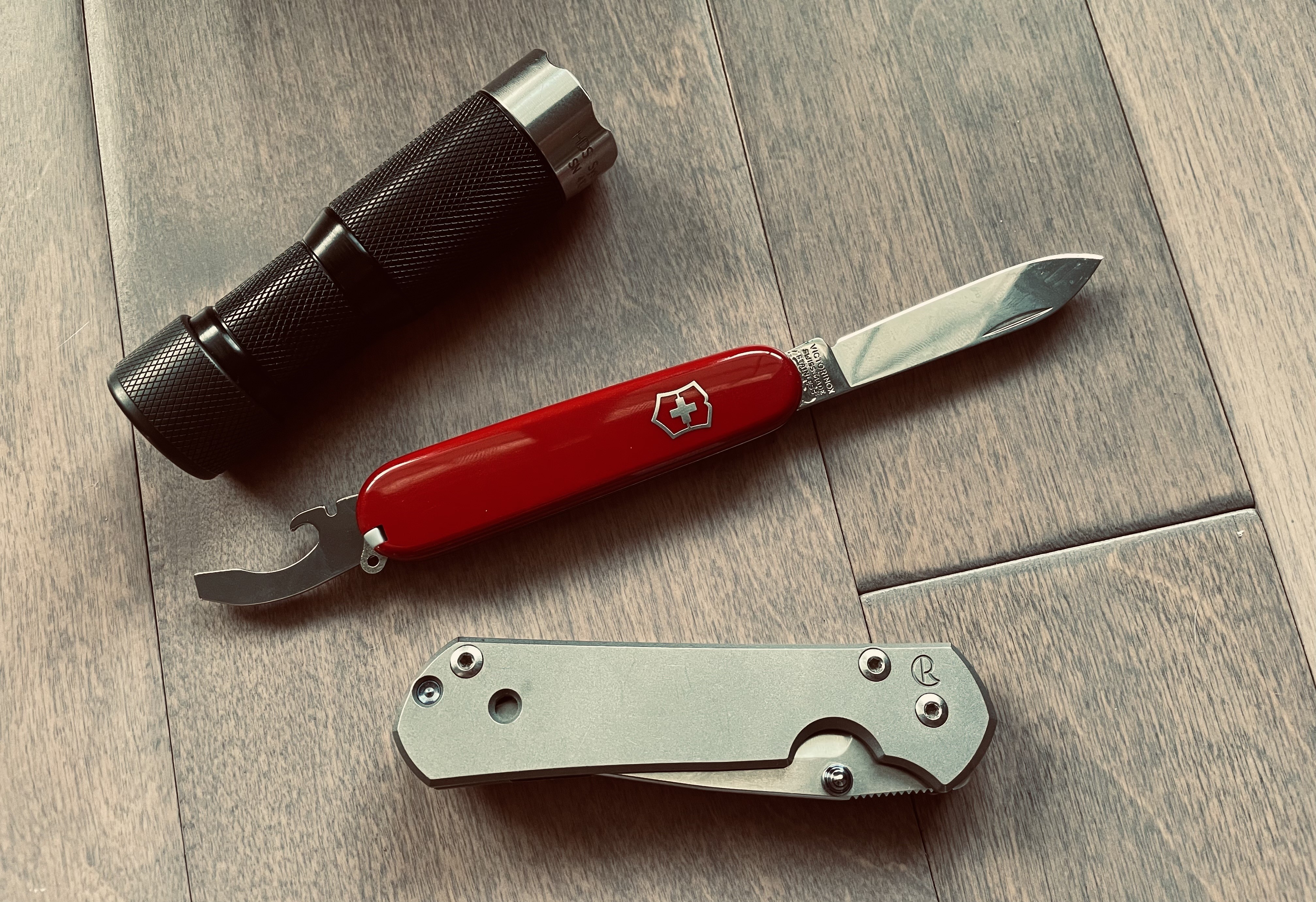 If you are currently willing to spend any money at all on an LED flashlight, it’s quite likely that the lumen ‘rating’ will be vastly higher than what HDS Systems rates the Rotary at. You really won’t even have to try.

But that’s of course not the full story here. HDS dives into this on their website if you want to see their justification for this. I’ll give you my thoughts: most lumen ratings are bullshit, wrapped in hype, and measured in ways which don’t apply to practical usage. In other words: is a flashlight actually 3000 lumens if that can only run that way for 60 seconds before it starts to step down to keep from overheating? You tell me. Does 3,000 lumens even matter if it is too bright for anything you need it for? Your call.

The thing about the Rotary is that this LED: 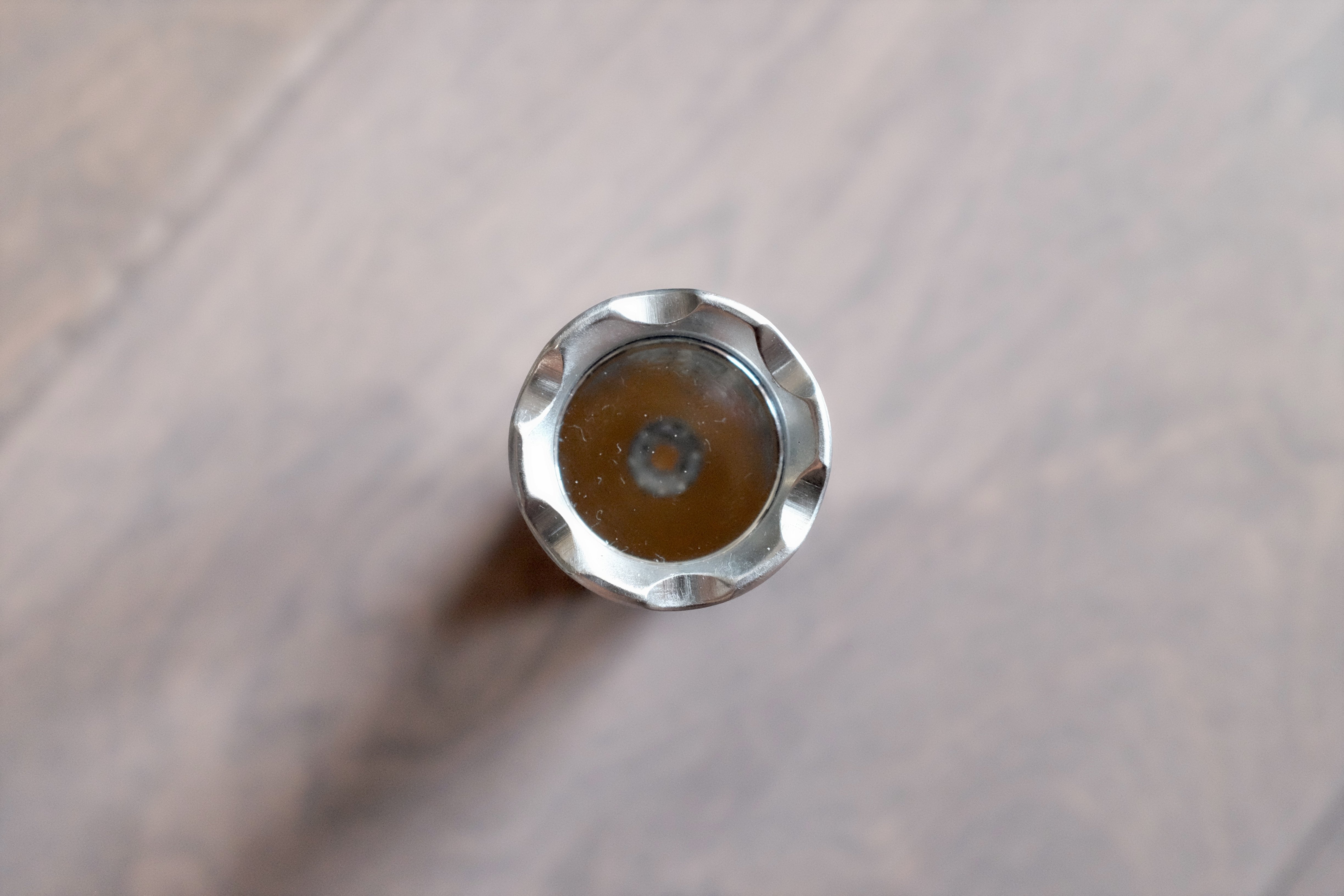 That specific LED has been measured to make sure it hit the 180 lumen mark — measured by HDS, after assembled, and after it warmed up, it will hit that output. This is done for all HDS lights:

We measure the output of each flashlight after it is completely assembled and adjust the output to produce the specified lumen output. This method allows the LED to warm up to operating temperature as part of the measurement process so the flashlight’s true lumen output can be measured and adjusted under representative operating conditions.

And then there’s usefulness. Between about 70 – 300 lumens is the most useful range of working light for almost everything you would want to do. That’s not to say the high lumen counts aren’t super fun, but if you’ve ever taken a 1000+ lumen light and tried to use it, you likely found yourself tamping back that output to make it actually useful. Our eyes adjust pretty well to the dark, and too much light can be as problematic at night as too little. That’s not universal, but this has been my experience. 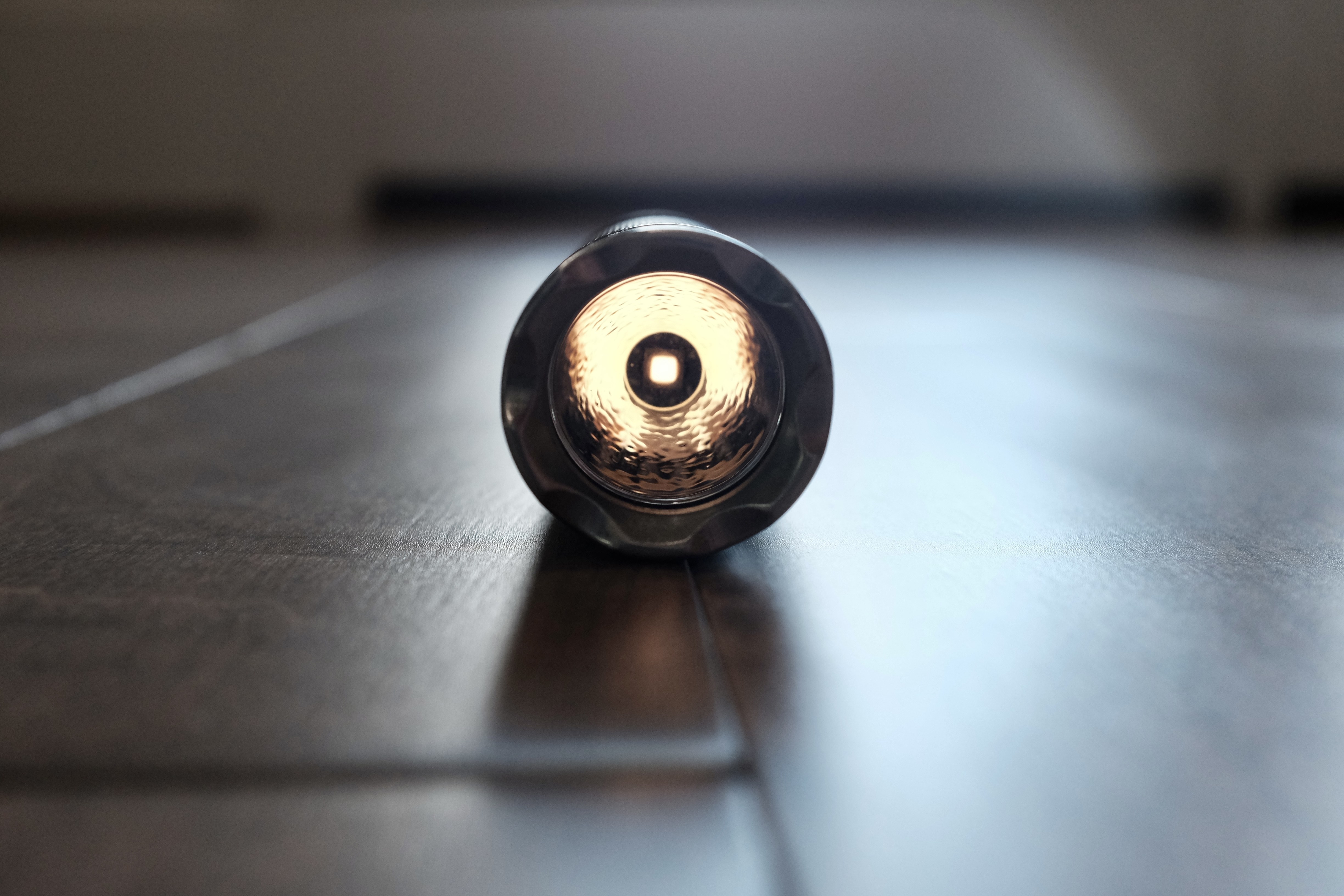 Again, that’s not the full story though, because, erm — this 180 lumen Rotary feels as bright as my other much higher rated lights. In all the many weeks I’ve been using this, there’s not been a single time I had the thought: I wish it were brighter. 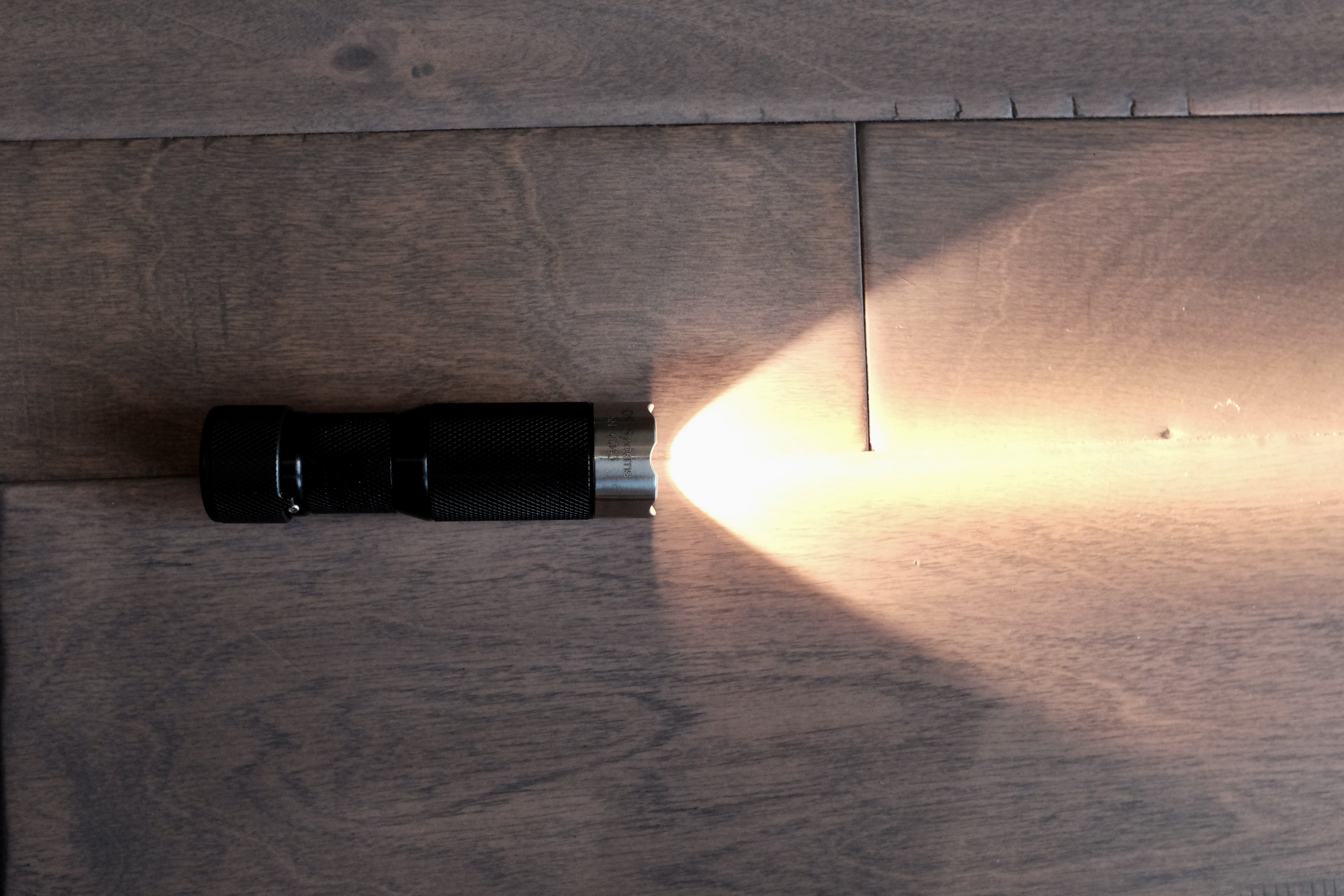 The NB30 LED (Nichia 219B, 180 lumens, 3000°K, 96 CRI) was a limited run of custom options (there’s almost always custom options on the site) and as you can see it is an exceedingly warm LED output. The CRI is high on this and generally it’s a killer light. I could not be happier with the light quality, beam shape, and color temp of this LED. It feels warm and cozy.

The stock LED, which I have been able to use in a Rotary Tactical (more on that later) is extremely cool white. Which means it looks blueish and has a low CRI on it (think around 70 or so). It’s not bad by any means, and I hate it far less than I thought I would. The 250 lumens output on that is right around what I would expect, plenty bright, nothing to complain about. 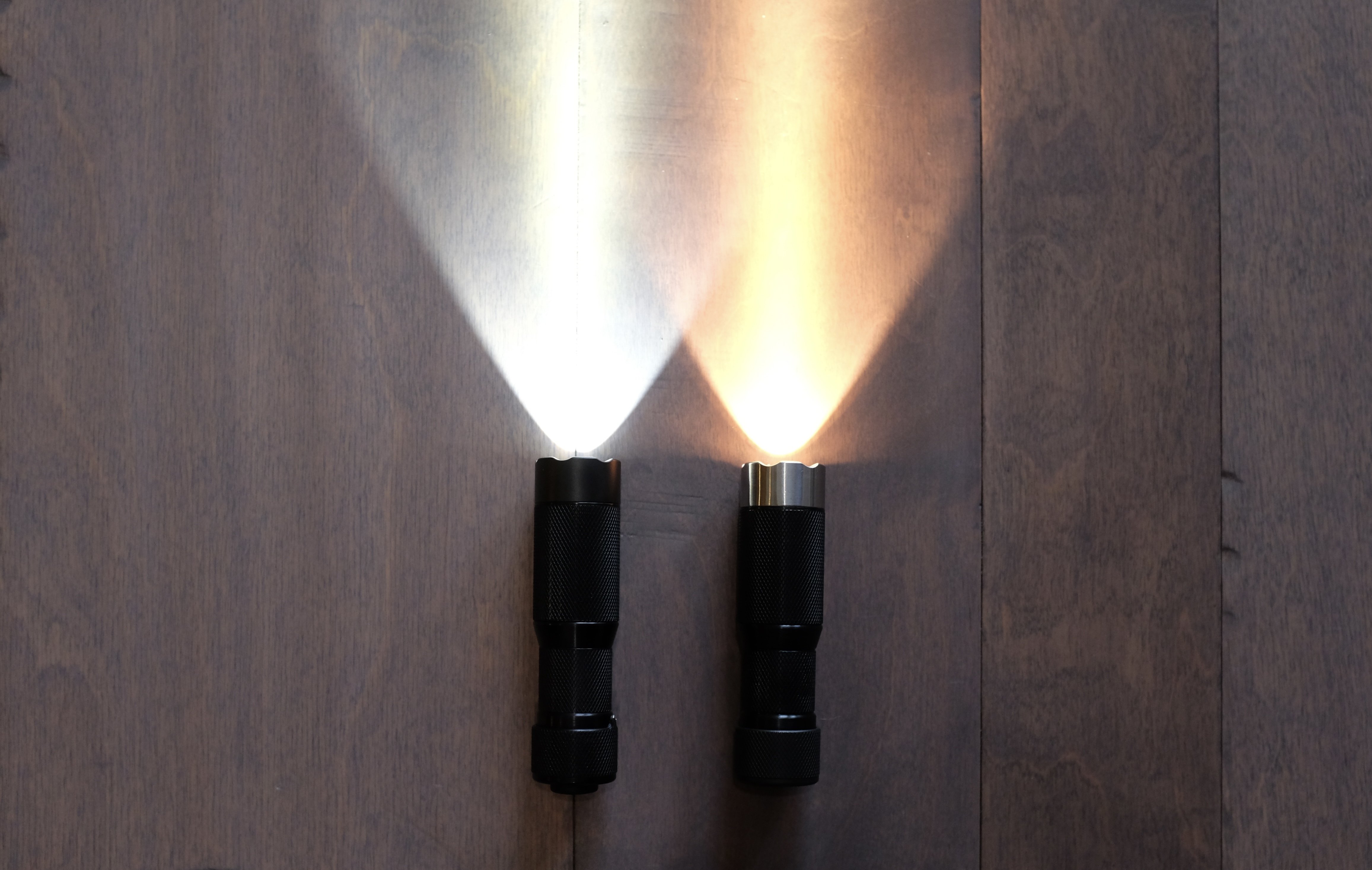 You should go custom on this light. The stock LED is fine, but for such a small price change ($299 -> $339) you can get yourself a much better LED. While writing this, HDS offers four high/super high CRI LED options — any of those are better offerings than stock.

The NB30 is warm and sexy. The stock LED feels like a SureFire LED to me, which isn’t bad, but it isn’t sexy.

As I mentioned above, the power is being driven from a single CR123a battery, which can be swapped for a RCR123 (rechargeable) if you would like. There’s only note about that: moving from disposable to rechargeable is automatic, but HDS notes that going from rechargeable to disposable necessitates a reset of the light (less invasive than it sounds). There are reasons for it, but that’s odd.

Either way the power source is solid, I like single CR123 lights a lot. There is an 18650 tube ($212) you can buy and a 2x AA tube ($220) should you want something more. Those make this into a beastly wand of a light and neither are necessary or worth the cash for most. There was a limited run of 18350 tubes last year which was labeled as a one time thing — that would be a neat change to the light itself, and I do wish I could source one.

tl;dr: Aces all around, don’t let the specs scare you off like they did for me initially.

Take all the complaints I had about the RRT01 Raptor and the placement of the rotary on that light and toss that out the window. HDS might not have invented a rotary control, but they sure as hell perfected it.

There’s two options for the button: raised and flush. I have lights with both:

The flush button is better in general and for EDC. For outdoors, I would want the raised button.

Ok, but that rotary, it’s smooth with good friction. You can mostly set this light to a desired output and leave the rotary there, and it is still likely be in that place next time you use it. The control has enough friction that it stays put pretty well, yet moves easily and very smoothly across the entire range of 24 steps. 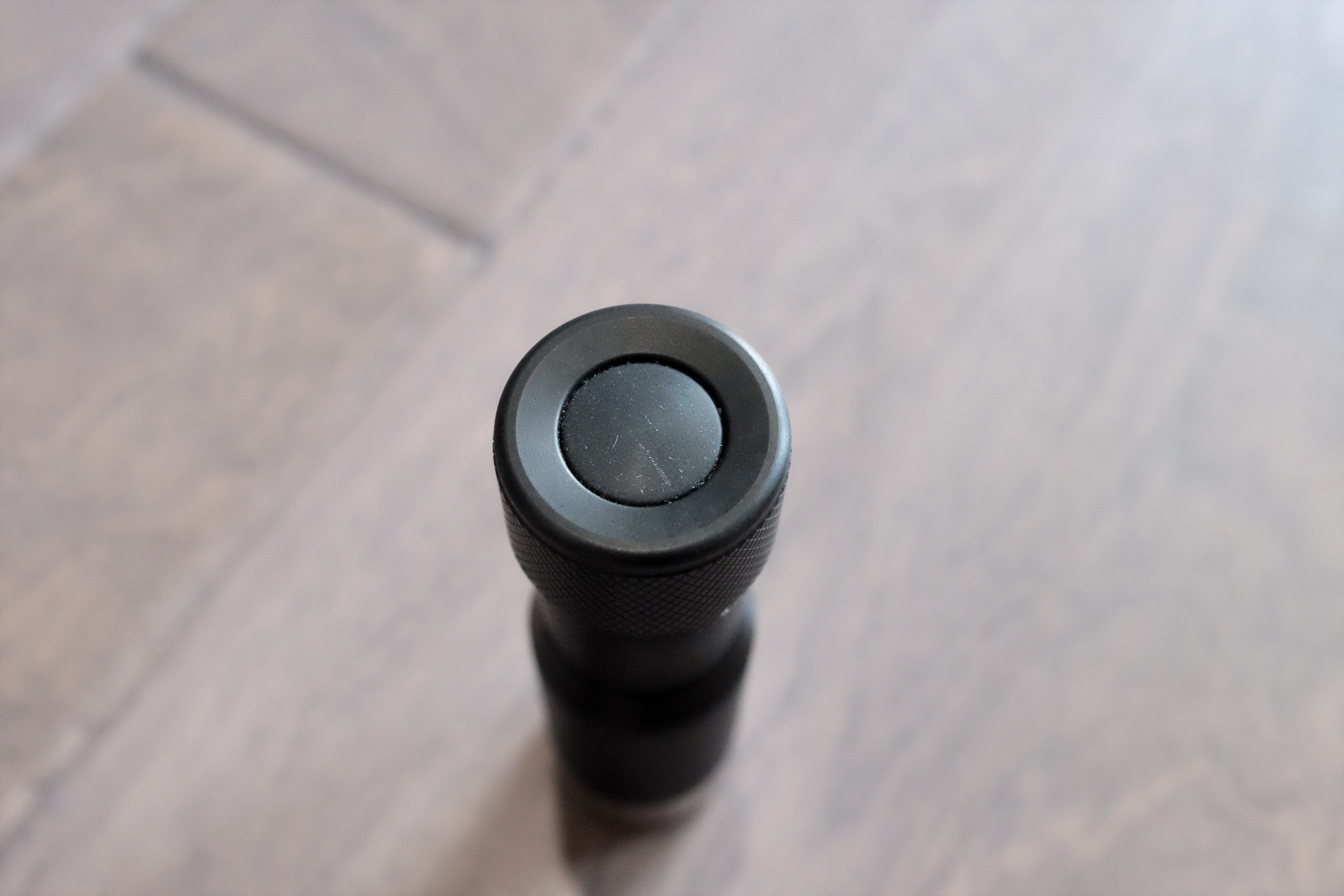 With each of the 24 steps you visibly see the light step up a level — it’s not a smooth ramp, that would have been cool but not the case. Here though is where the tactical model differs, and I’ll simply say on that point: don’t bother with the tactical model, as it offers little to no advantage unless you are in the military or something, I have one for sale if you want, but you don’t want.

The standard Rotary UI is bonkers good though. 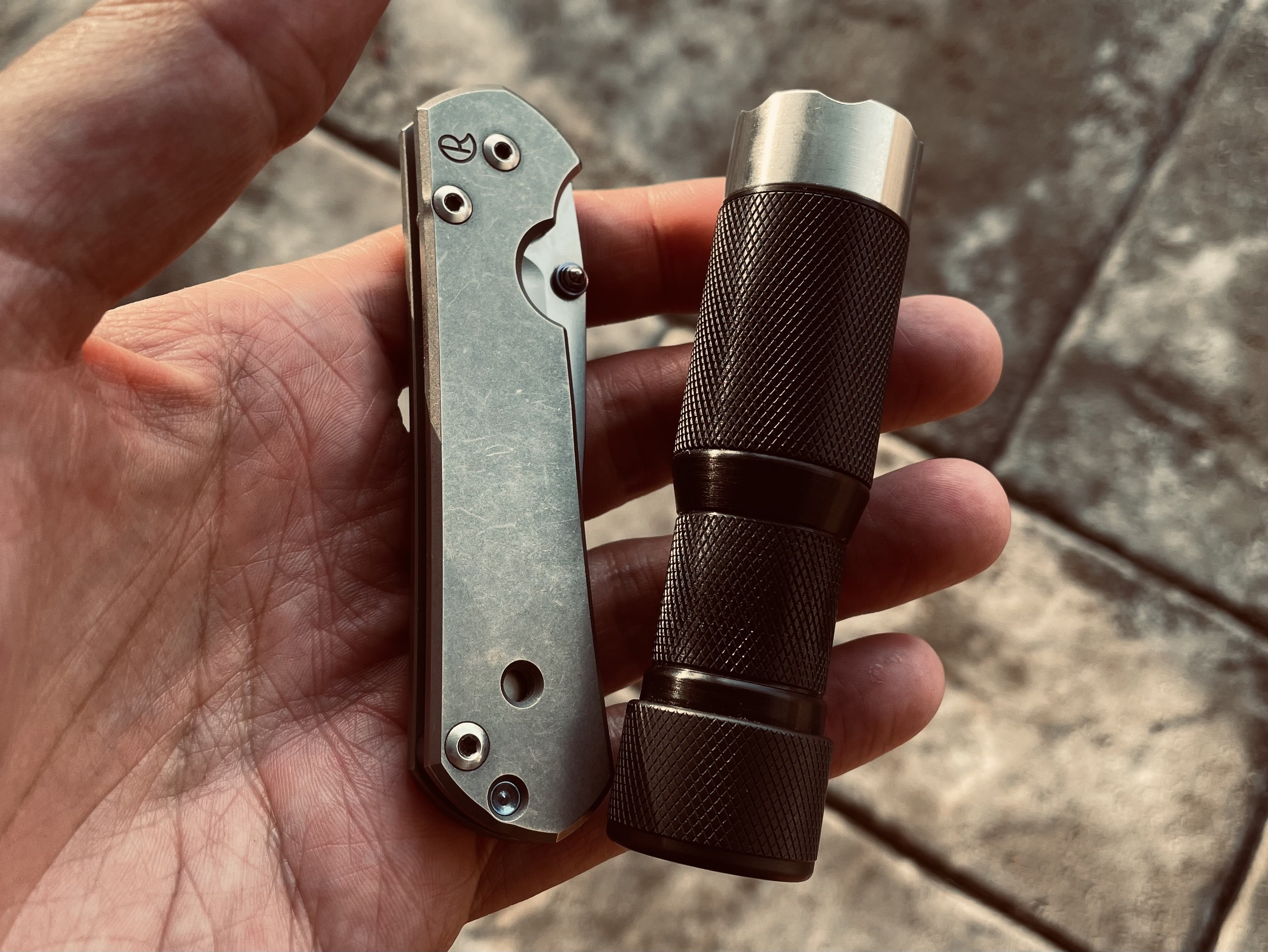 Every light has a downside, and the Rotary’s downside is carrying it. It’s not ideal. There’s no easy/readily available pocket clip which makes this light sit well in your pocket. Likewise, if you happen to set it on a surface that is not level you can watch it roll away quickly. 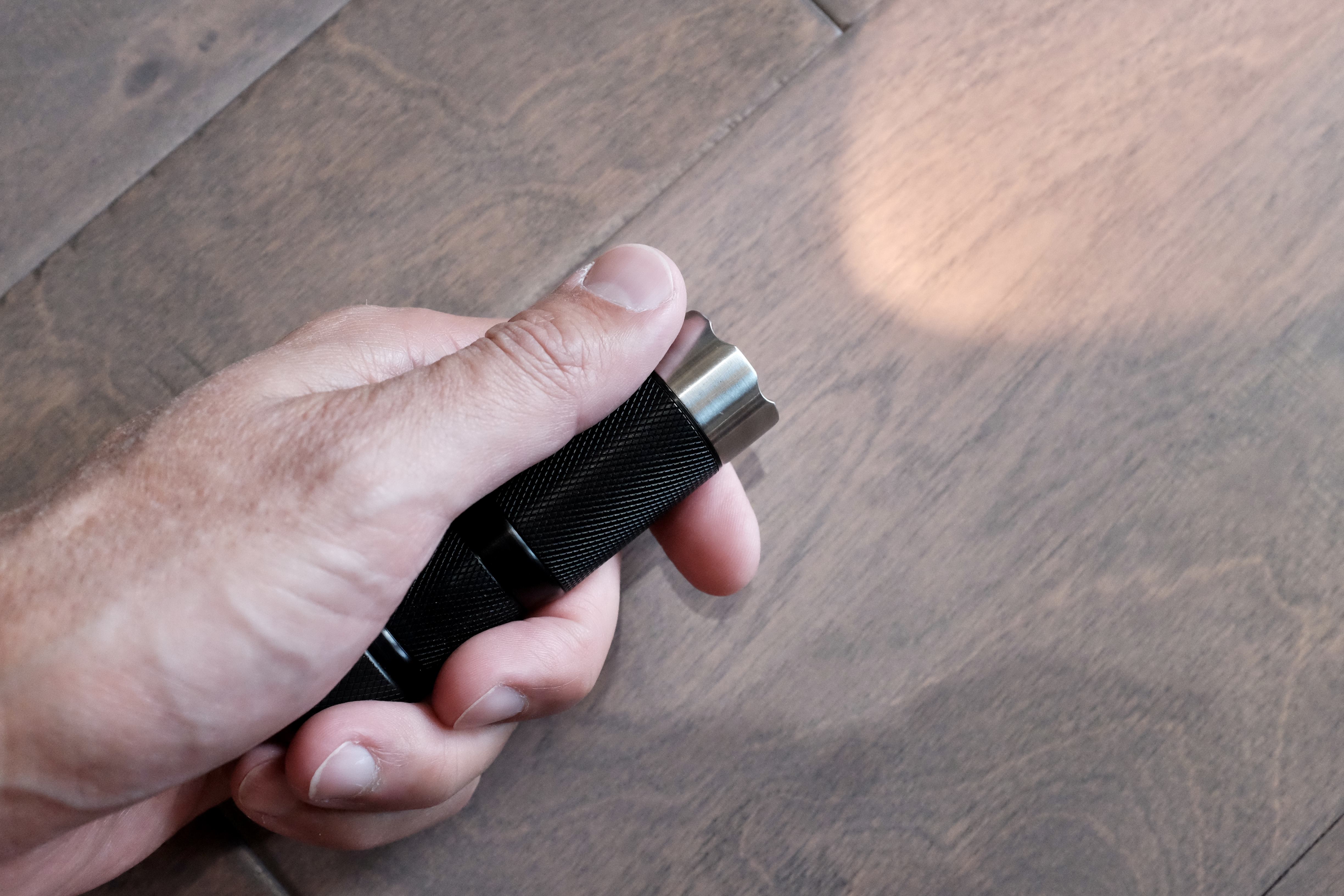 It does fit in your hand like a dream, but it fits in your pocket like a heavy lump if steel. Which it is. You can get a pocket clip, but almost anyone who uses a Rotary will also tell you that, so far, it’s a waste of time as none are good. 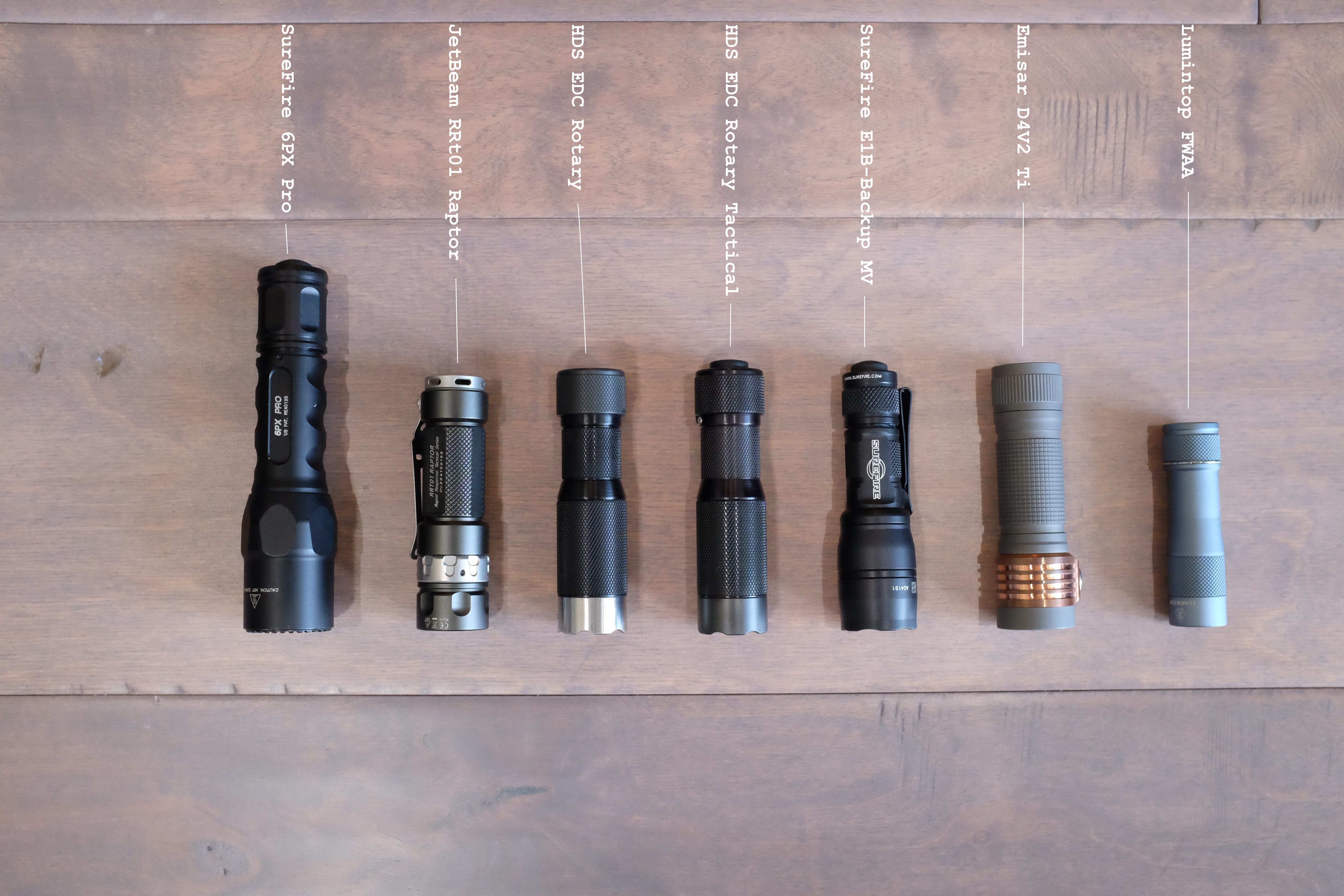 So you are going to have a lump in the bottom of your pocket and that’s that. I use an Arc Ripcord to keep mine tidy in my pocket, others use various holster. The Ripcord is what I recommend. 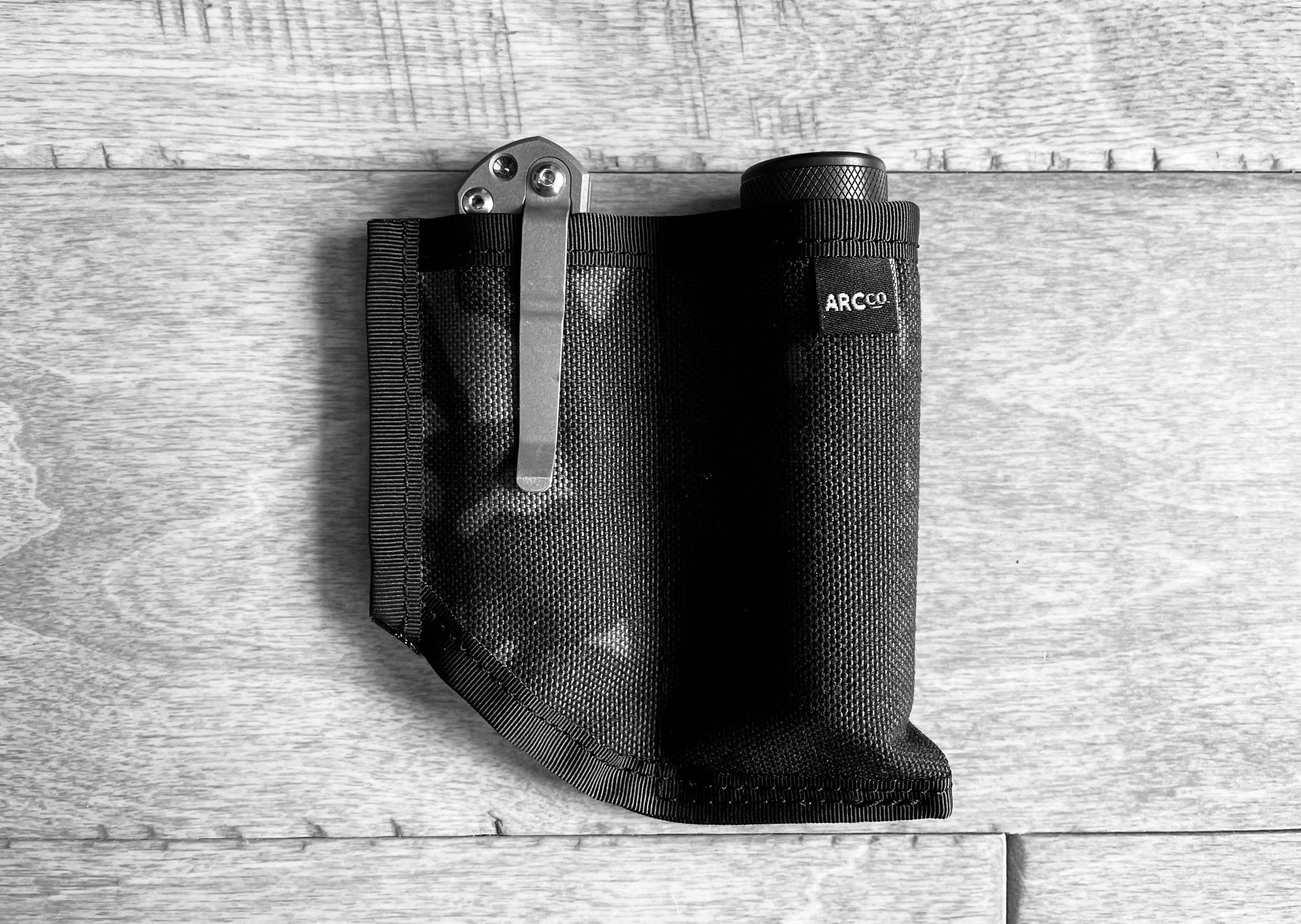 Ripcord holding a Small Sebenza 31, and HDS Rotary — the best carry you can get, don’t let anyone tell you different.

The Rotary doesn’t get high points for carry, but as someone who only liked AAA lights before: this is worth carrying. 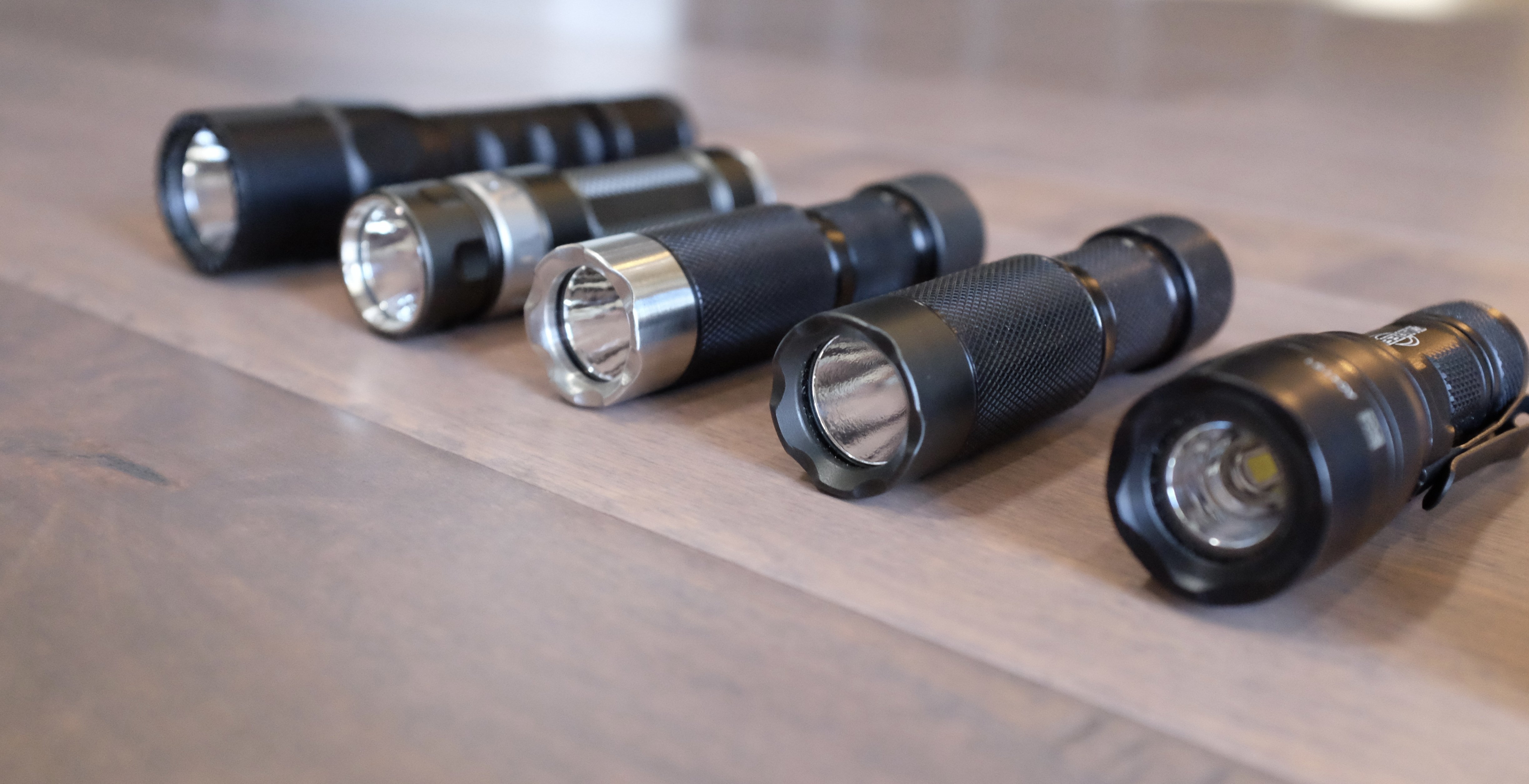 My only, and I mean only, complaint is the lack of pocket clip. It would be absolute perfection with a good pocket clip. There isn’t one, may never be one. Even still I want more of these, and everyone should have one of these if they want the best light out there.

This light makes no sense. No one should like this light for the price and the spec sheet alone. And yet when you get one in your hand: it is game over.

This light is amazing.

If some nightmare happened and I could only pick one light to take, it would be this HDS Rotary without even a pause.

Just buy one or two.