A dual purpose tactical and duty light that has a great water rating and long run times, but it is missing something.

It has been a while since I grabbed a Fenix light, and while the PD series is popular, the PD36 Tac specifically is a newer light with a standout feature: tail selector switch. This is a big tactical light, which is clearly meant to be used for long stretches of time, in security type situations. 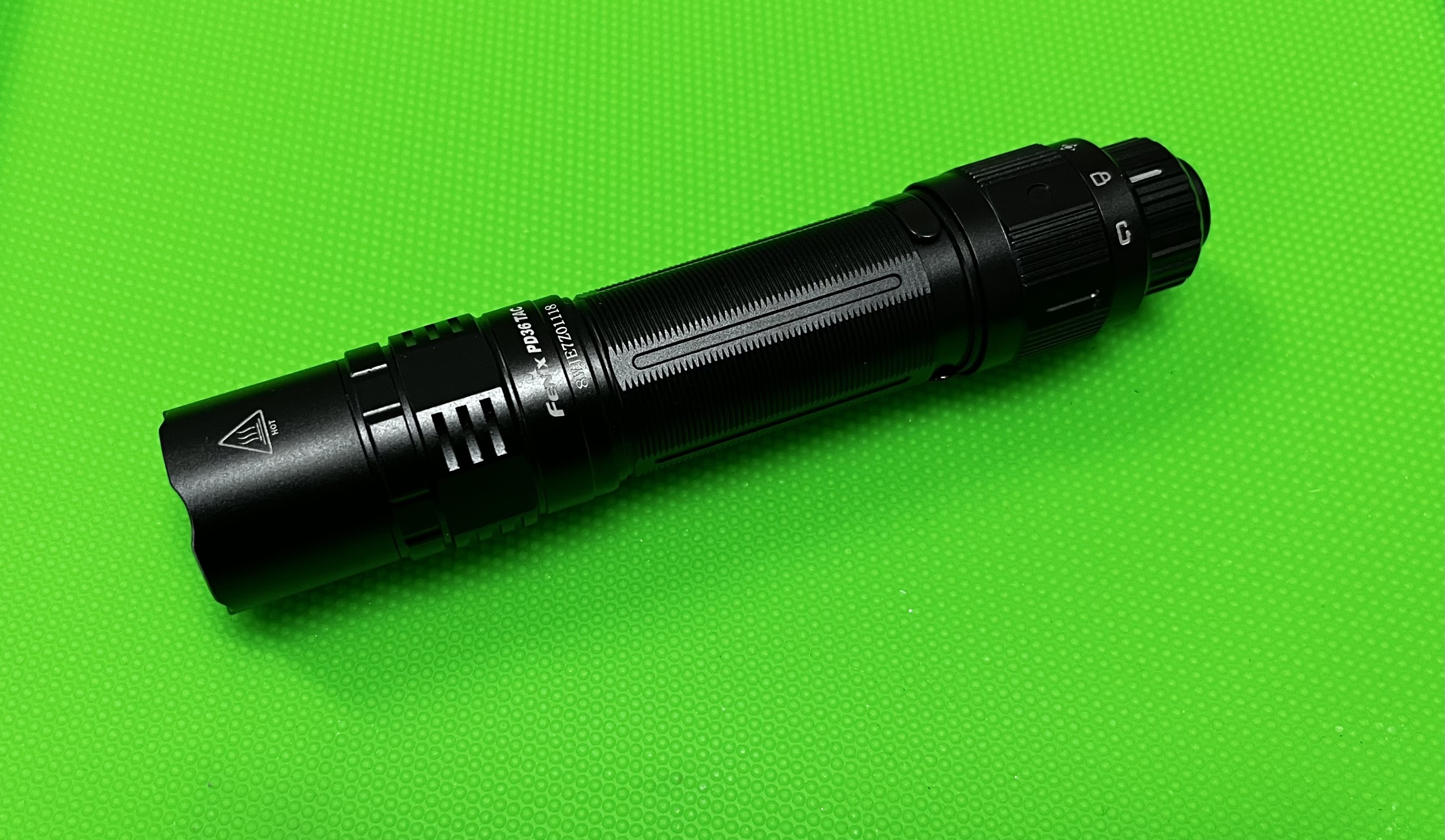 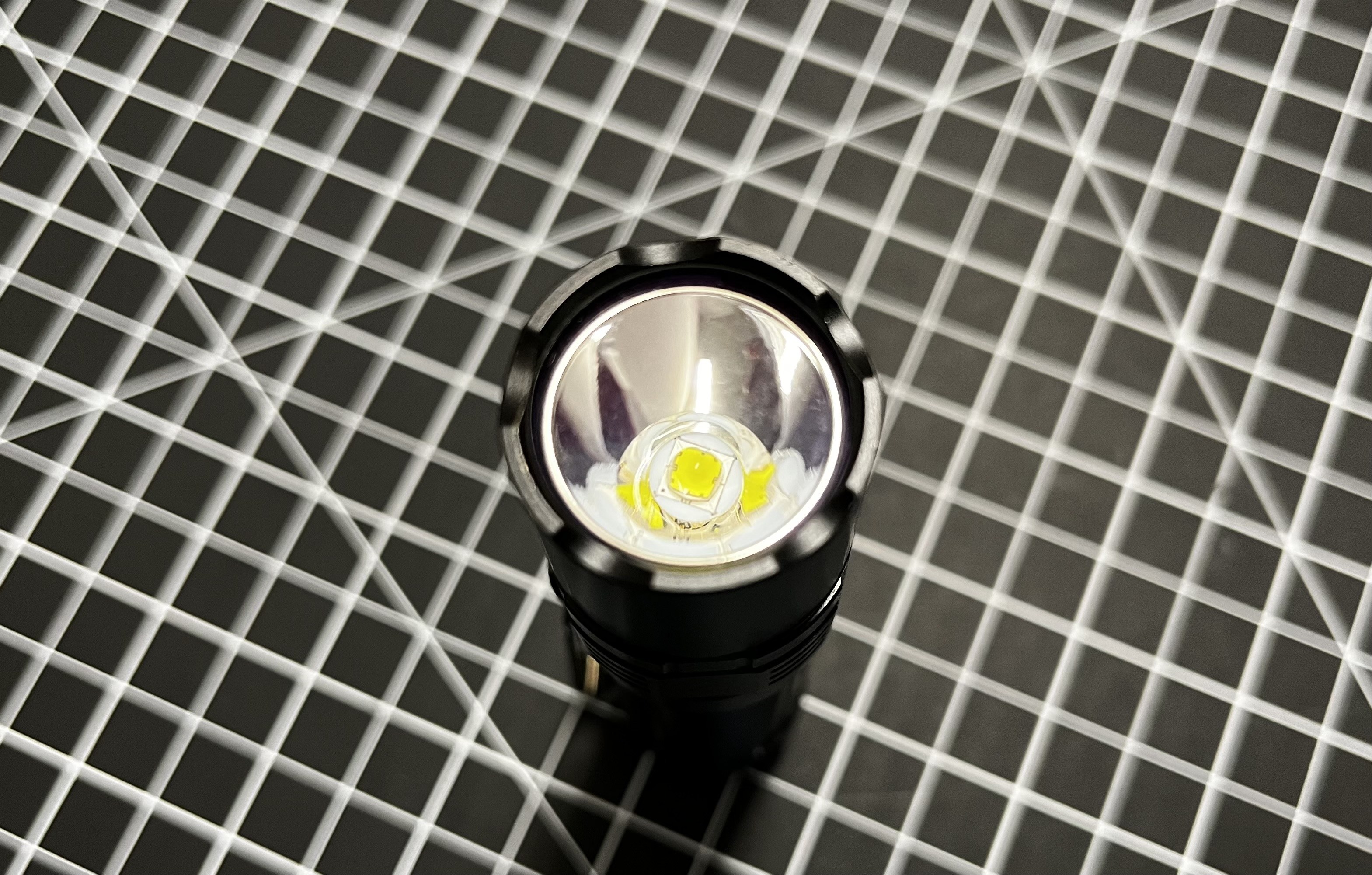 The LED here is a cool white SST70, which is a big LED. It’s 6500k. It’s cool, but not really bad, though not great. It claims an output of 3000 lumens, but that claim is a little — well even if it is accurate the light doesn’t feel like it is that bright. It feels as bright as any light over 1500 lumens I have, which is to be expected. 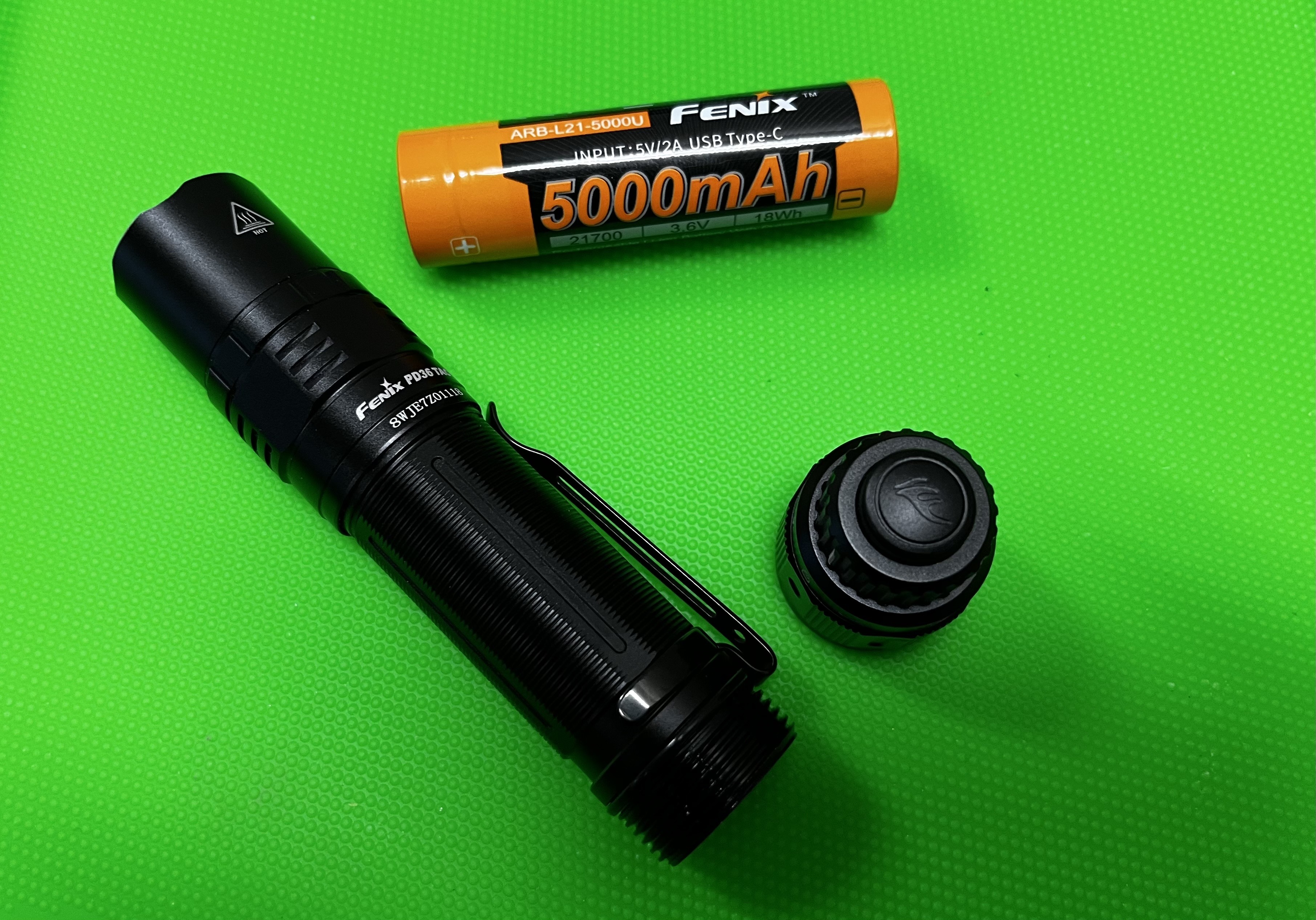 This is all powered by a 21700 battery for monster run times. The battery the light comes with is USB-C chargeable and 5000mAh. That gives it a claimed runtime of 3.1hrs at 2000 lumens. Or 10.1 hours at 350 lumens, which is plenty blinding for most tasks. Again, for a tactical duty light, this is hitting a sweet spot of being bright, easily carried, easily controlled and running for a long time. 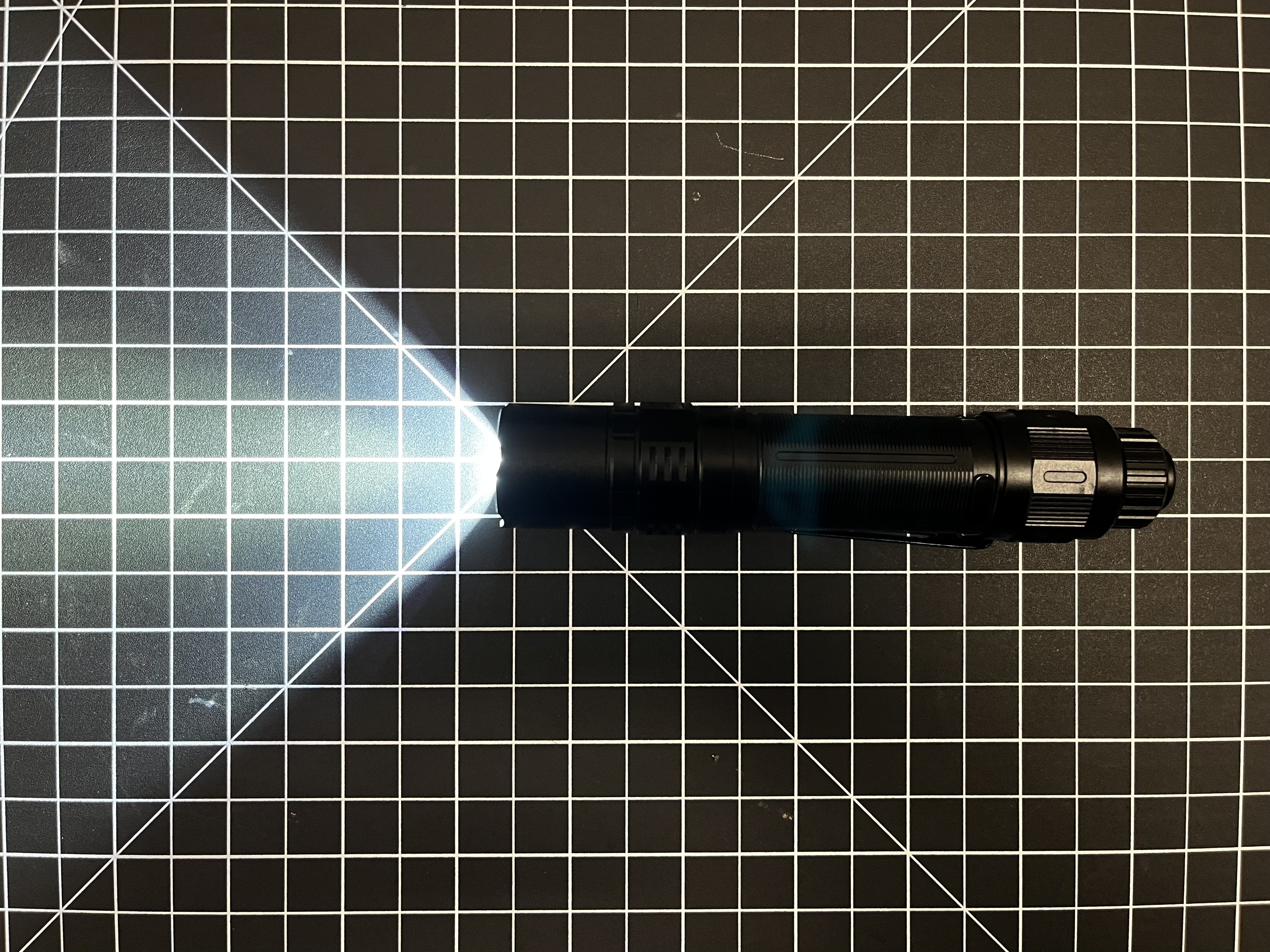 Where this light struggles a bit is that the beam isn’t that focused. Shinning it in pitch black out into a field with moderate fog showed a beam that falls off quickly, and really is only meant for 100ft situations with 200ft being a stretch. Still, it is bright, and it does balance the beam well — it’s not a thrower or flood though. It’s general purpose in the shape and throw.

So the big deal about this light is the mode selector switch on the tailcap. The light itself is activated by a tail swtich, but it offers three distinct modes selected by a mechanical rotary dial. This is actually easy to use in practice: one mode offers high output (but not full turbo), there’s a lockout which keeps the button from being depressed or locks the mode to on, and last a duty mode where the light cycles with presses between low-med-high-turbo. 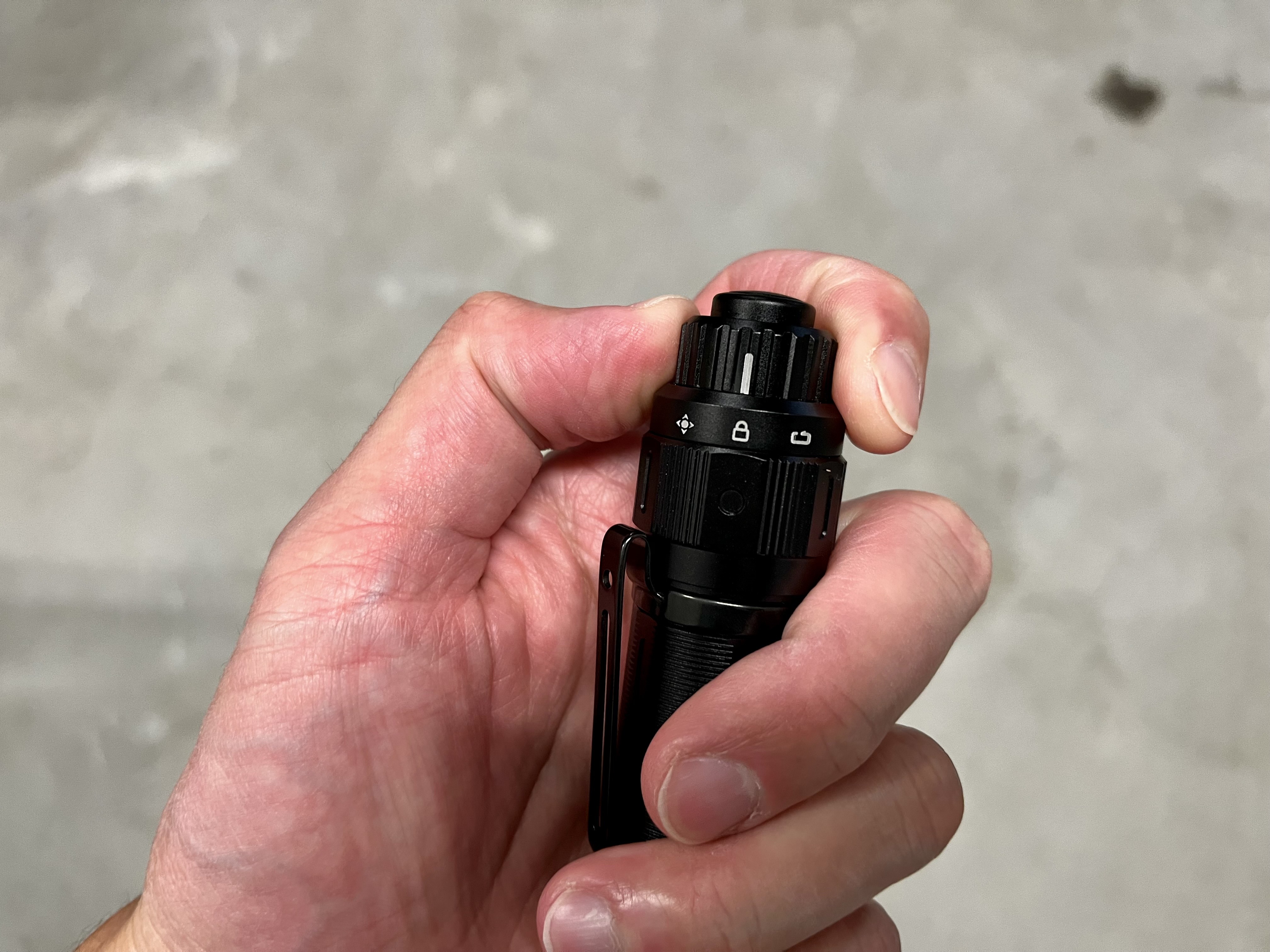 There’s a few other features, but no need to dive into them here.

Basically you can set this light so it always pegs on at high, which is great for blinding/defense, but also ideal for signaling. Or you can set the light to be more useful in a wider range of situations where you can cycle up to the brightest modes, thus making the light work better for more confined spaces. 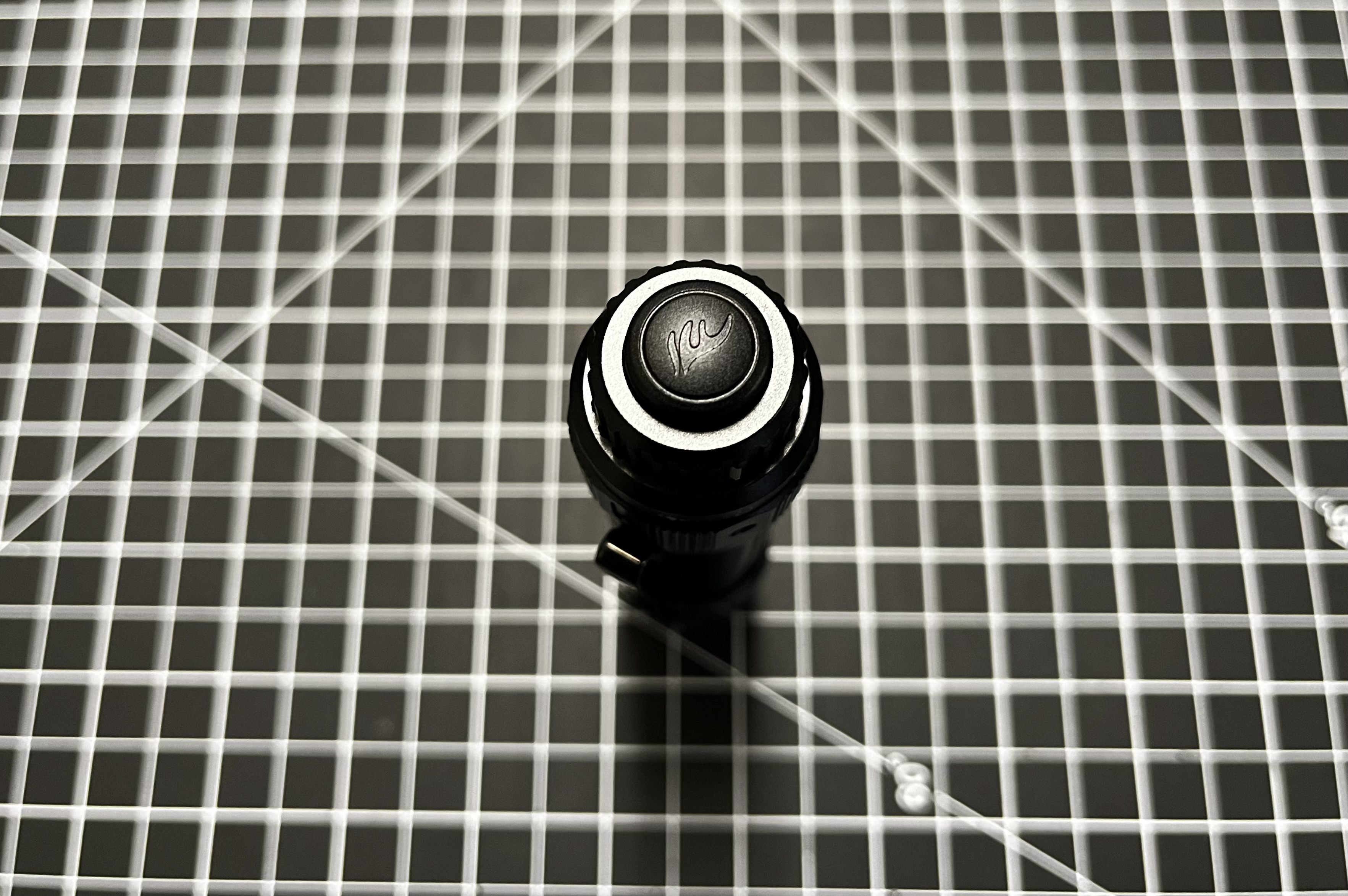 Of those modes, lockout sits in the middle and I find it the hardest to reliably select without looking. And adjusting the mode when you “draw” the light from your pocket is a no go as it is not positioned well for ease of selecting the mode one handed. This is a set the mode, and leave it there type of light. Adjusting it can be done when clipped to your pocket (and kept in your pocket) and reliably hit, except for lockout which could use a little firmer click into place for confidence. 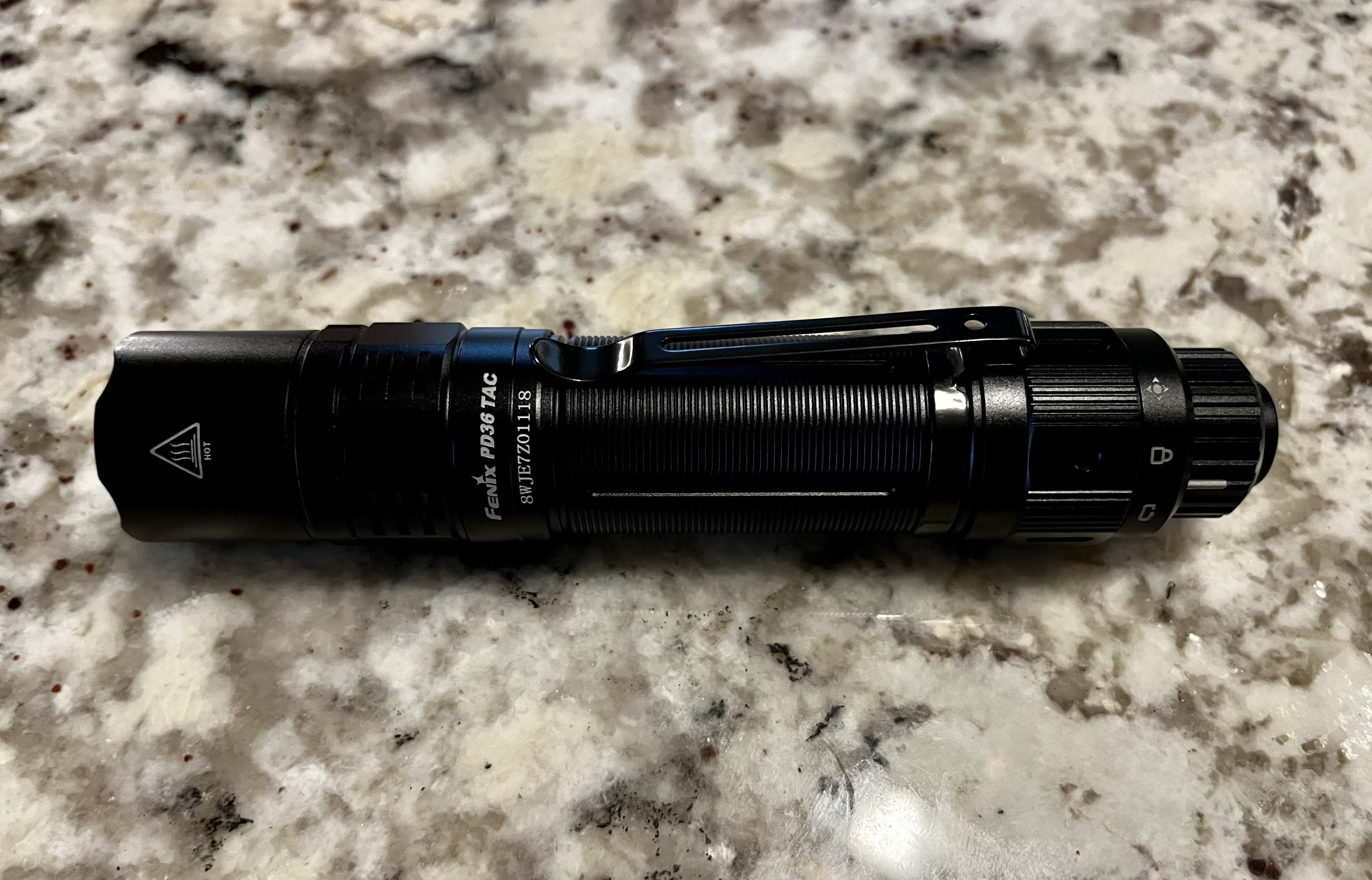 Either way, I really like this setup. It’s smart and works well for a wide range of situations.

In Use and In Pocket 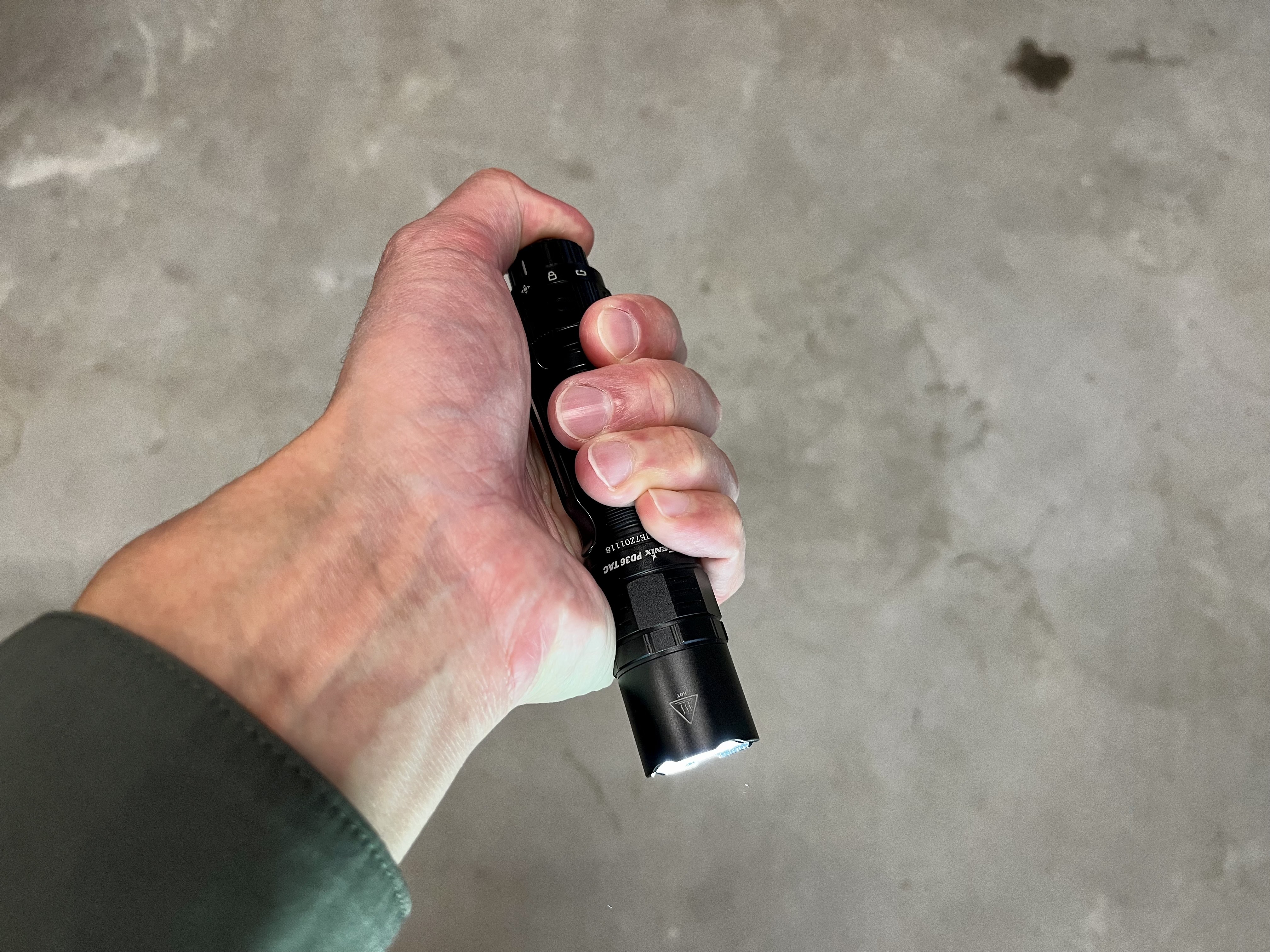 Ok, a couple comments on a few spots of this light before I get into why I wanted this to begin with.

Alright, that said, I want to talk about why I grabbed this light. It’s not cheap, low CRI and generally not something which would captivate me. But every morning I ruck at 5:15am, and it’s generally dark. I don’t need or use a flashlight to see where I am going, but I carry one because I do often use one. That usage falls under a few areas:

For the first three, I don’t need a very bright light, but for the last one I need full power. I’ve tried almost all my lights in these morning workouts and the only one that sticks is my SureFire E1B-MV. It’s a two stage switch that goes high-low, and it’s bright enough and useful enough that it works. More than that, I trust it. 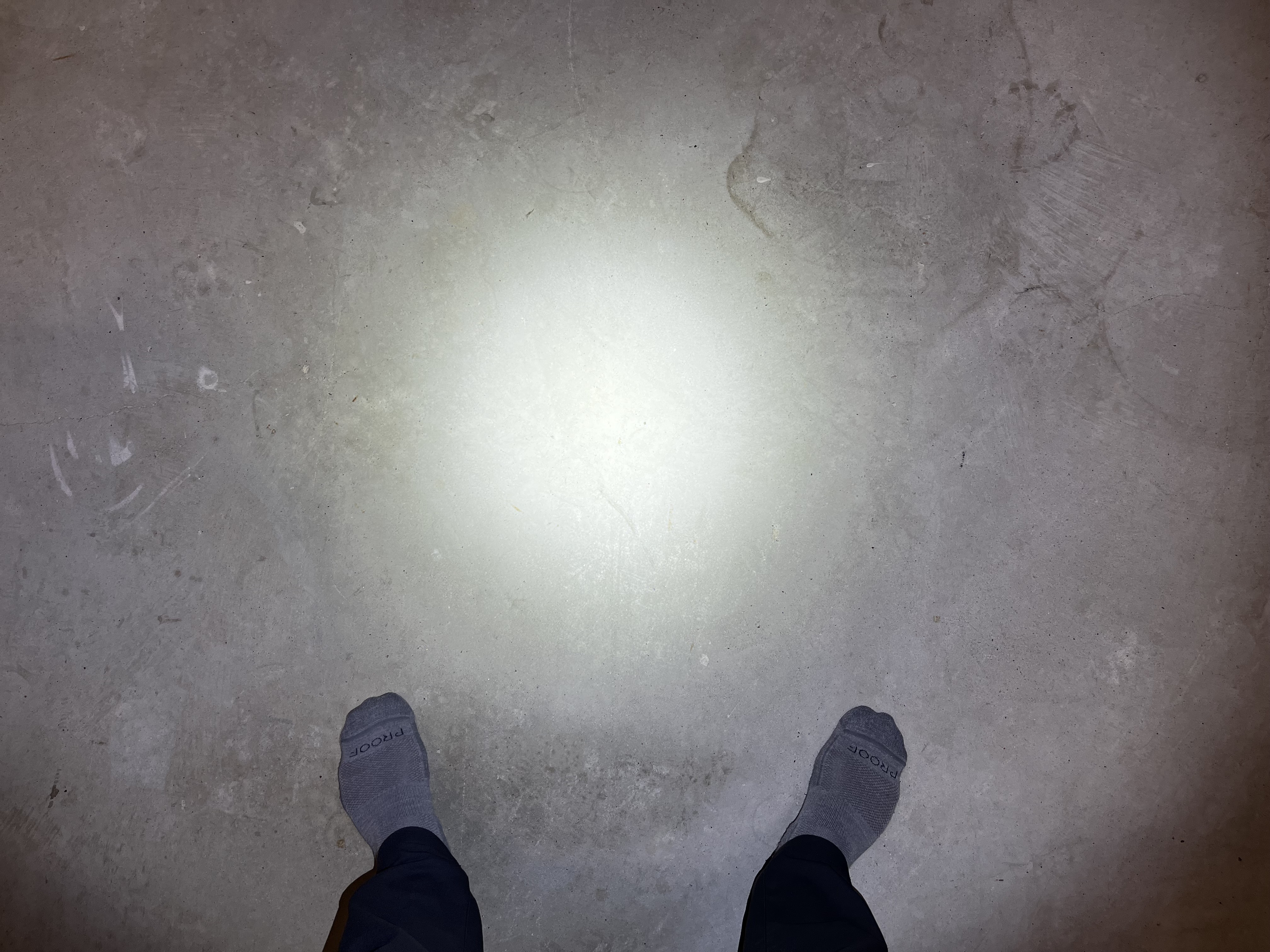 Since getting the PD36 Tac, I’ve been using it during my mornings. I keep the light on high only mode, so if I need to warn off a car being an idiot, I know I can hit it right away and be seen. But I have the option to move to a mode that offers lower light quickly enough that it works well for the other scenarios too. Thus I don’t have to light up a huge area with full power, if all I want to do is add light as I walk across a street.

This light is heavy, but it still fits in my pocket pretty well. It is really nice to hold, and it feels like you could make use of it as a defensive impact weapon if needed — though that seems far worse than running away. Anyways, the output and beam shape is good for outdoors in the dark. The mode offerings are good, and the clip is solid — but could be better (for a tactical light, I don’t love that the clip is not more affixed to the light than clipping on).

It is a big light, but with that you get good power and excellent run time. It feels beefy in the hand, but in a way where it feels good to carry, not silly. It is the only other light I use for rucking in the early morning (unless I am testing something else). I am torn between whether it fills the role of the SureFire better or not, but it’s close.

I like this light, it’s big, but I do like it. For $99 (I used a coupon to knock 20% off that) it’s an ok offering. If you get it for less, the offering becomes more compelling. But you should know that it’s a big and somewhat heavy light. 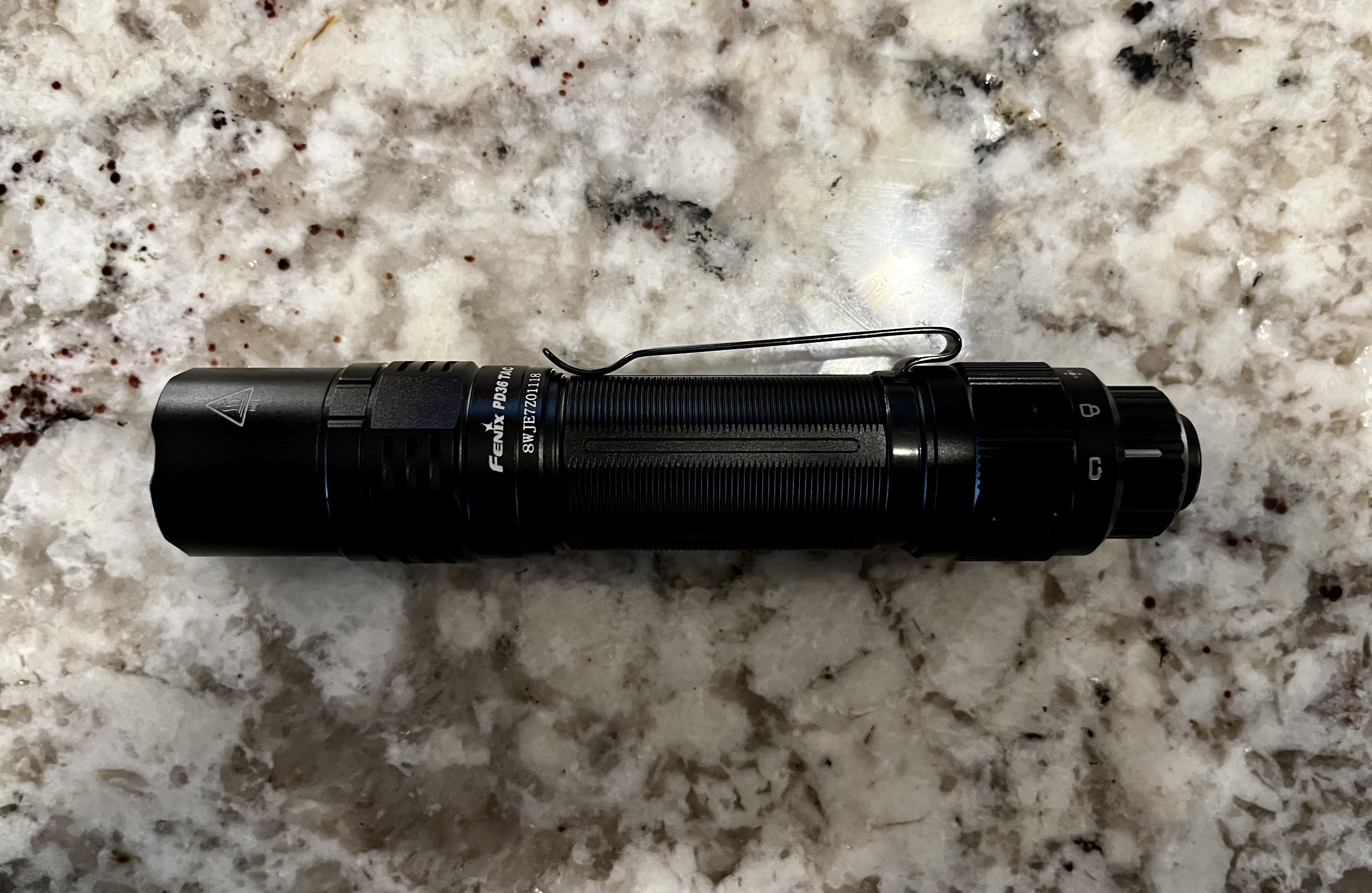 If you need something that can be tactical when needed, and run for a very long time — you could do a lot worse. It’s IP68 rated so it’s perfectly great outdoors and in the weather. I really like the selector switch and hope to see Fenix use it in more lights going forward.

For my morning rucking, it’s overkill. I don’t need the runtime or the power, so it really is just extra bulk in my pocket. That’s not a bad thing, but my small SureFire fills the same role more discretely.

I am basically mixed on this light. There’s a lot to like, and a lot of little things that aren’t there (like a better LED) which would make this far more compelling.

My advice here is that if you need a light that will come on quickly to high, but allows for a secondary use case where you have low-to-high modes, then this is a pretty great setup. However if you mostly need a light to come on around low, but quickly shortcut to high, I think the SureFire ‘gas pedal’ switches on the EDC line might be a better fit.